Everyone gets up early though. 6.30 is a lie in, and this morning, we lay in. Almost until seven! We had been due to go on an all day game drive but after three full days of travelling followed by a long river and game drive experience, we needed a little time to recharge. So after making scrambled eggs and coffee we pottered about sorting, showering and blogging in the peace and quiet of an empty campground. The wind was up a bit this morning, churning the river into vigorous wavelets. Not a day for canoeing.

After lunch we met up with Akim again and took the boat up the river. There were lots of hippos on the Zimbabwe shore, basking in the sunshine. Akim said when it’s windy the water is colder and the hippos prefer to get warm in the sunshine. 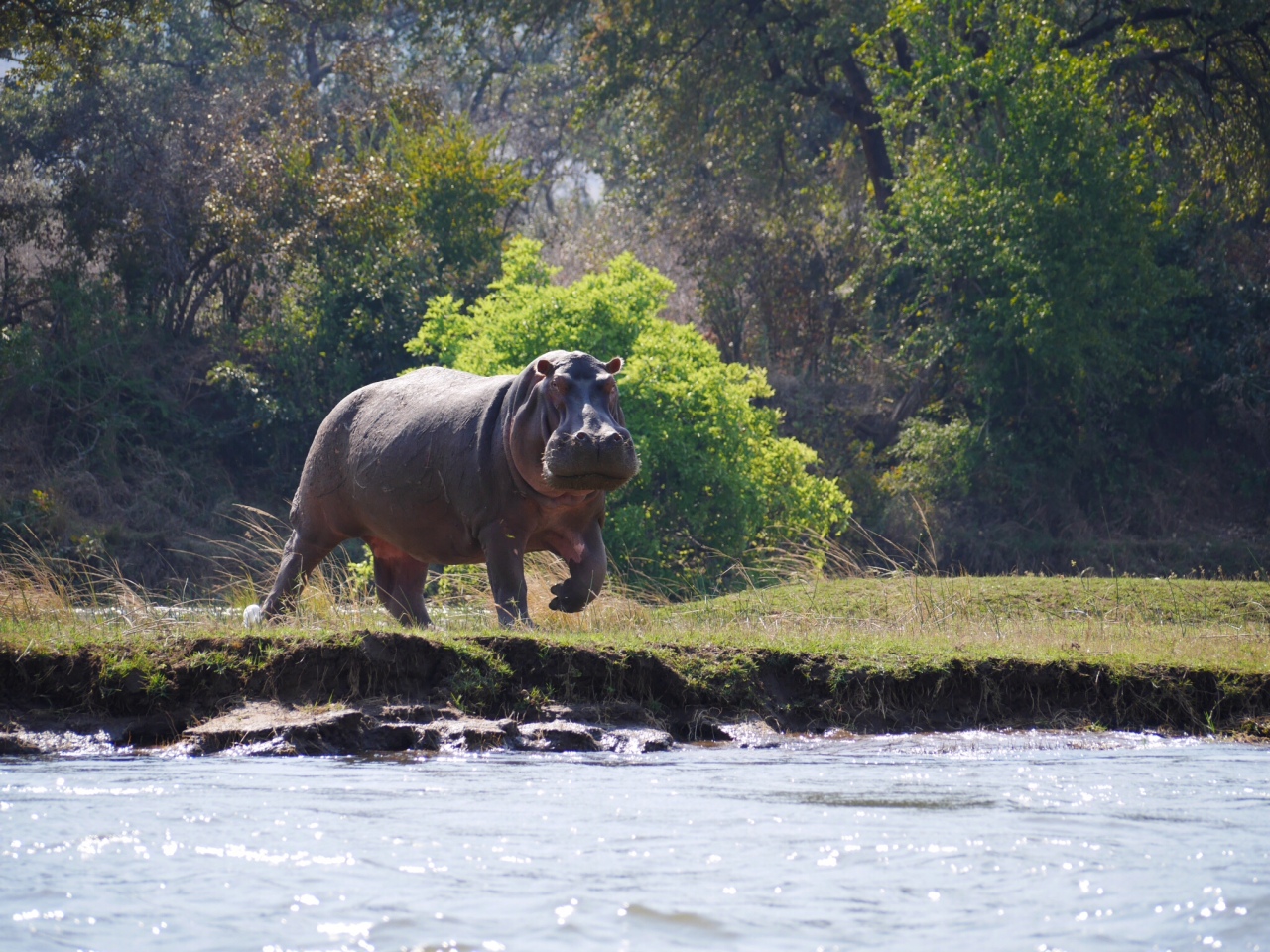 We saw a few quite close up, snoozing or grazing but after an irritated snort they usually slipped into the water. They are so big and comically rotund that it’s hard to imagine them swimming down there, let alone hauling themselves in and out of the water, which they somehow manage to do with graceful ease. 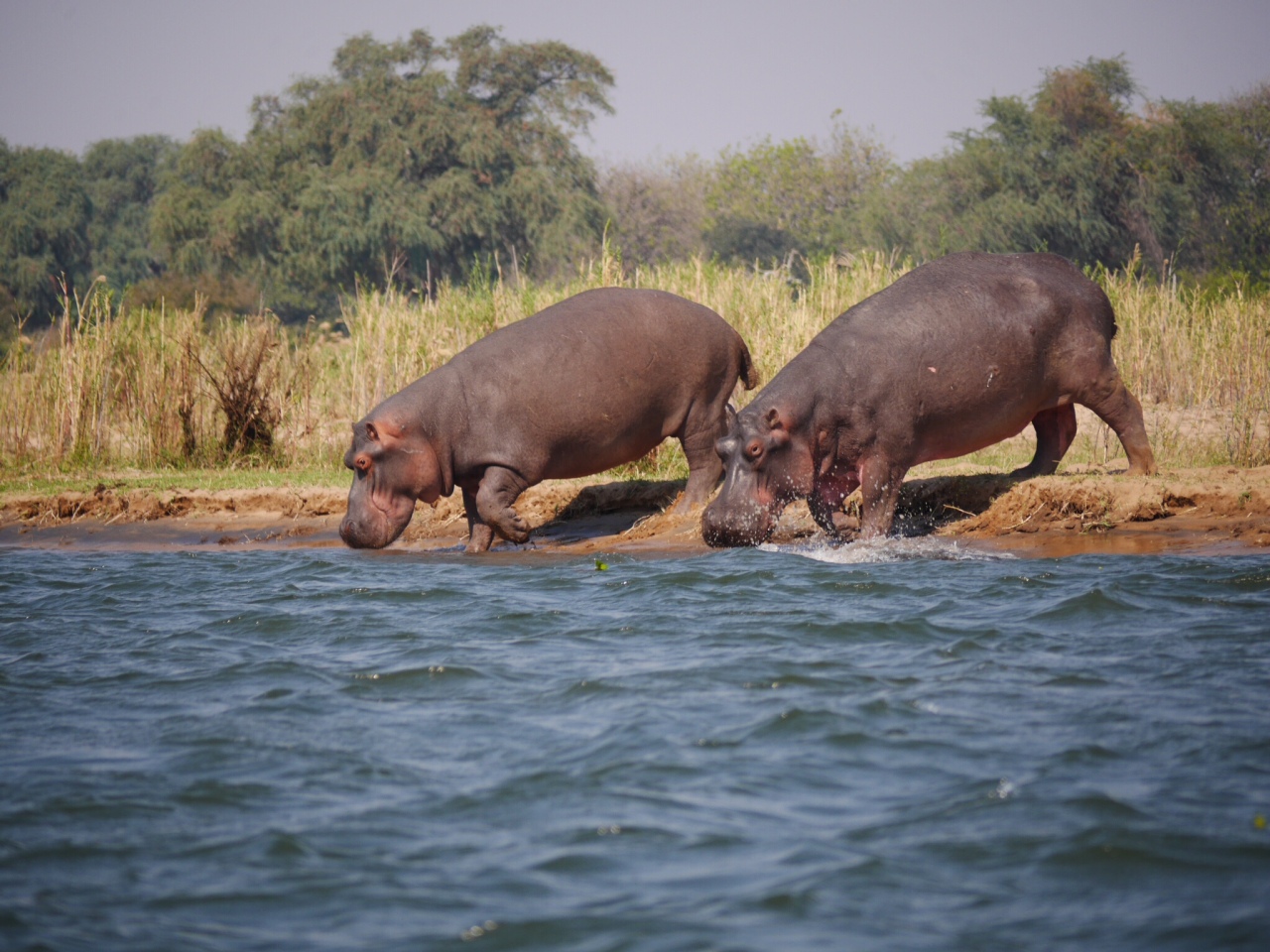 On our side of the Zambezi there were elephants. Some grazed at the edge of the bank, others reached down, knees on the bank so they could reach down to the river with their trunks. We saw a group of about ten young males horsing around in the river up to their necks; shoving each other, playfighting with trunks and tusks and climbing on each other’s backs. It was so special to see them enjoying themselves. They were aware of us but not really bothered for the most part.

An older bull waggled his ears at us and we backed off a bit.

We’ve noticed that the elephants here are much less tolerant of people than those we’ve seen in other countries. Usually we’ve been able to watch them without their taking much notice other than a scornful sort of look. Here though almost every elephant we’ve stopped to watch has done the warning display; shaking its head, flapping its ears, pawing the ground.

It’s maybe because there are simply fewer tourists here than in places like Kenya, and the elephants aren’t as used to having people around. We read somewhere that Zambia is like Botswana was twenty years ago in terms of tourist development, in that there isn’t a whole lot. Brett here at Mvuu said people were taken by surprise by the state of the road network (as we were) “They expect it to be like Zimbabwe or Namibia or Kenya, and it isn’t anything like as developed as that”. 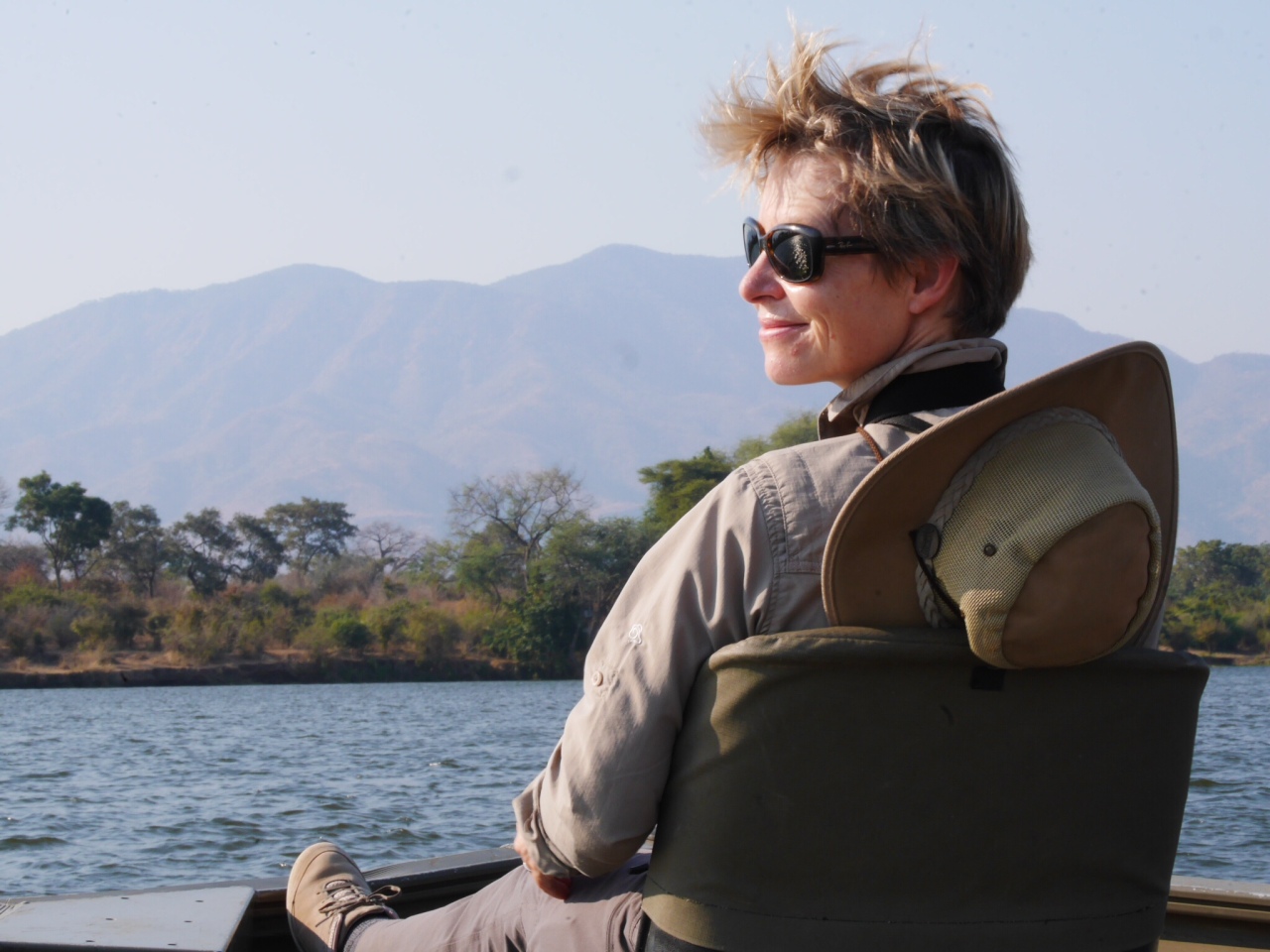 Further upstream, Akim took us past a village farm where people had planted crops right down to the water’s edge. He explained that the village was further inland but people had to stay with the crops to keep the elephants away. The area was fenced off with tree branches and pieces of material flapping in the wind.

They also used wooden poles to stake off a section of river a few meters out from the shore where they could collect water to irrigate the crops and swim too, without fear of being attacked by the crocodiles. Akim, who grew up by the river, said it was drilled into them how to behave around it, and what to do when confronted by an elephant (walk slowly away). He said none of the kids had been killed by crocs where he grew up, but fishermen had.

We circled back downstream a little way and pulled in at the bank where a game vehicle was waiting for us. We were going to see the Game Management Area next to the National Park and I don’t think we expected too much to be honest. But it turned out to be a little gem.

The landscape was varied, criss-crossed by dry river gulches and covered with low bushes and tall, beautiful trees. There were haughty oryx, and foraging elephants and leaping impala, kicking up their heels. Warthogs raced through the scrub and everywhere the sound of bees and birds.

Akim took us to a broad, flat area with a few baobabs but little scrub. It had been the site of a village. Several had been moved when they created the GMA and the park, in a process which I suspect was not particularly happy for the villagers. We found scraps of pottery, some with delicate patterns.

The sun gave us all long shadows and the golden light lit up everything around us. Akim went off to find baobab fruit and cracked open the big pods to reveal curious chalky fruit inside, which he gave us to suck.

It was sort of sherberty with a tang of citrus and we sucked off the chalky outside to get to the nut which was too hard for my teeth. Akim said they usually fried and ate them. He put a handful of the chalky pods into a nearly empty water bottle, shook it and then we drank the milky mixture. It was a citrusy baobab shake. He said the taste reminded him of his childhood. 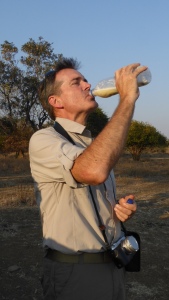 The sun sank behind the mountains we drove through to get here, and we headed back to Mvuu passing more elephants, and skittish impala. It was getting dark when we arrived back at the camp and said our goodbyes to Akim. Such a lovely guy; “Thank you for being so nice to me” he said, when it had been just the other way around. Brett told us later that it’s possible he will become the Chief of his village, and I couldn’t imagine anyone better for the job.

P and I are sitting by the fire now. Tom is already in bed and we are moving that way too. Tomorrow we have a long drive across the Zambezi National Park over a rough and little-used track. We’ve talked it through with Brett and promised to text him when we get to the other side, or he’ll be sending out a search party.