Somehow we managed to get our tents up last night, regaled by hippos grunting in the darkness. The soundtrack for our night was a steady hum from crickets and frogs punctuated by the grunts and occasional bellow from the hippos, like someone learning one note on an alpenhorn. It was actually quite a shock to get up this morning and see the river just a hundred meters away; broad and serene with Zimbabwe on the far shore.

Brett was very clear that we were not to walk about on our own at night. “This camp is not fenced and hippos and elephants come through all the time”. Hippos tend to come out of the water at night to graze. One of the staff told us later that a man was killed here last July when he came across a bull elephant in musth on the edge of the camp in the middle of the day and it chased him. So, we are warned.

At seven we picked up hot breakfast sandwiches and met our guide Akim, a young guy with a cheery smile. We hopped into two canoes and paddled out into the river, with the sun glowing on the horizon ahead of us. 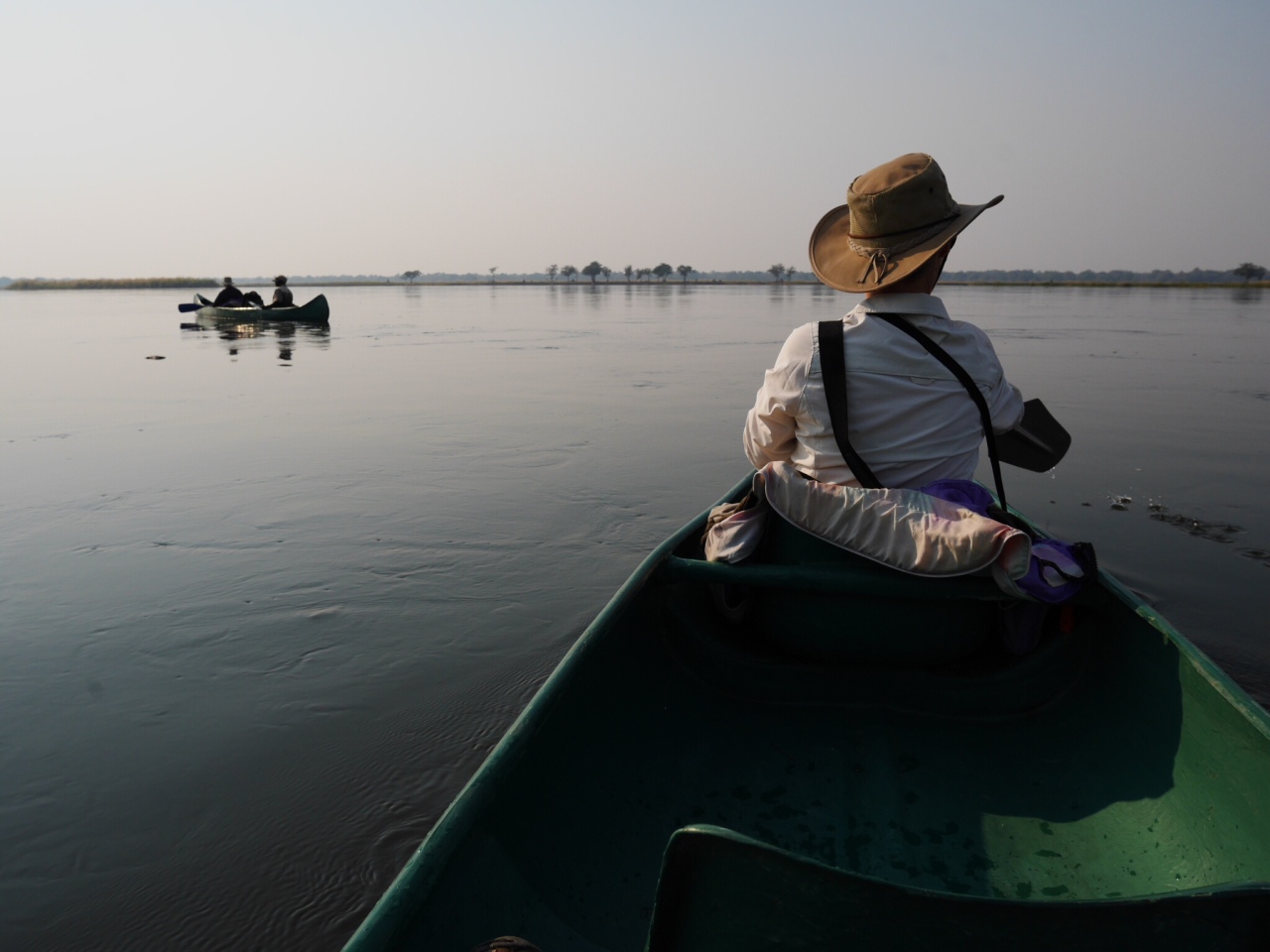 It was so still and though we were carried along by the current at quite a clip there was little sense of it if you didn’t look at the bank. Occasionally we saw hippos ears and noses pop up and look at us before grunting and slipping back down beneath the water, but they were never close.

Their sound is difficult to trace and it often felt like they were Right There, but they never were. “Don’t trail your hand in the water – this is the Zambezi” said Lynn (Brett’s wife) before we set out. And sleeping on the river bank, a crocodile reminded us why.

This is not a river to capsize into and Brett had only let us go today because it was calm. And it was calm. Blissfully so. We didn’t see many animals to be honest but it was lovely to hear the birdsong come and go as we passed different trees and it was somehow surprising to find such tranquility in such a mighty river.

We stopped to stretch our legs at what looked like a churned up river bed with muddy gorges. 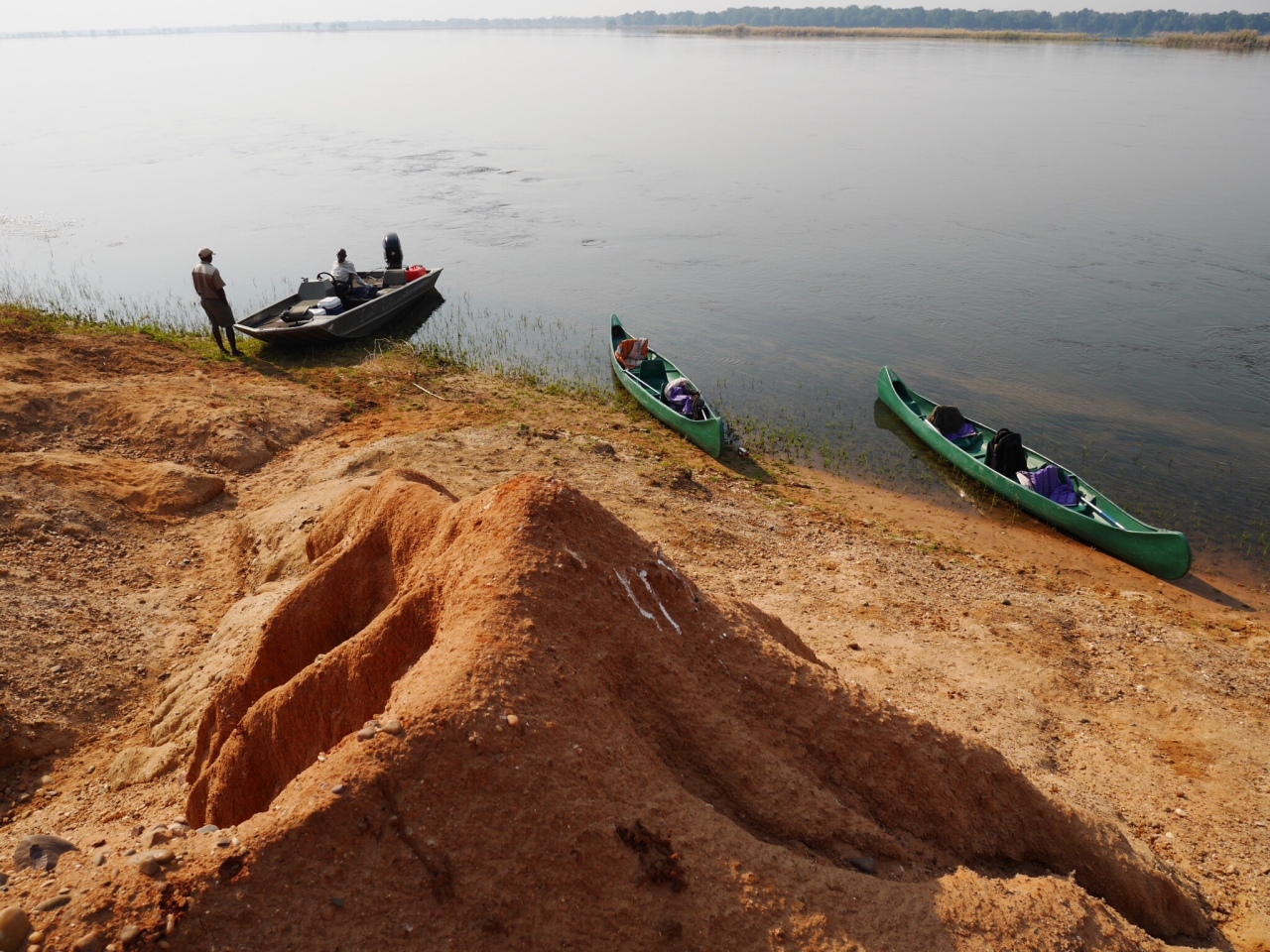 Not a riverbed in fact but carved out by the annual rains which last from roughly December until March, and lift the river by a meter or more.

Three hours after we set off, we came to the Park boundary where we reluctantly left our canoes and signed in at an office surrounded by hopeful baboons.

There was a brief intermission here as Akim realised he’d brought the wrong set of vehicle keys and someone had to go back in a motorboat to get them from Mvuu. We spent the time watching the hippos near the reed islands in the main channel, and a big bull elephant having a bath on the Zimbabwe side.

Keys recovered, we set off into the National Park and saw, um, almost no animals whatsoever initially. Yes there were Impala about the place and a couple of warthogs, but that, it seemed was it.

It was approaching midday which is about the worst time to go on a game drive, so we had to content ourselves with Akim’s excellent explanations about the other types of flora and fauna; how the elephants like the fibre from the Baobab trees and the fact that Sparrow Weaver birds bring up their chicks communally. The birds were plentiful and various and always seem very foreign somehow.

It was a pleasant drive through a stark and lovely landscape but P and I were exchanging the odd raised eyebrow about the lack of animals. So, lunch in the shade of a big tree and a chat with Akim, who lived in one of the riverside villages we had passed near Leopards Hill Road. “Four children” he said beaming.

He sees them for a week every three weeks, but seemed to enjoy his job and knew about everything we asked him to explain. That said, given the lack of animals we were working our way around to saying that maybe we should just head back to the river in the hope of seeing elephants on the return boat trip way. But he was so keen to make up for the time we’d missed over the keys business that we were soon back on the trail. And that turned out to be a good thing.

The elephants shook their ears at us, but couldn’t really be bothered to frighten us off properly. In the heat of the afternoon the animals go to and from the river to drink and suddenly we were spotting them all over the place. 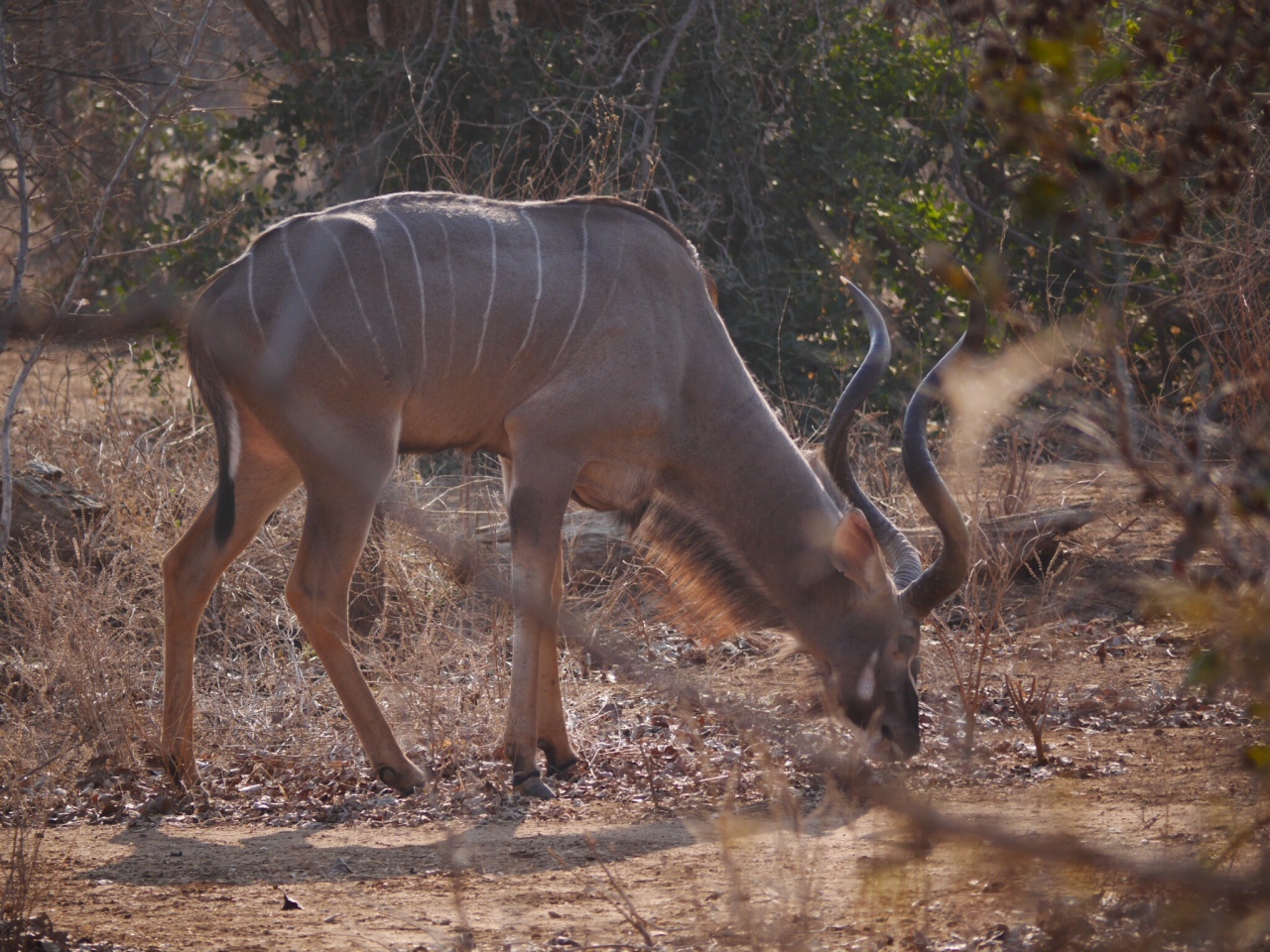 And then it really was time to head back to the river for the motor boat to take us back to Mvuu. It was lovely to see the animals from the riverside including a big herd of elephants crossing over to one of the reed islands. 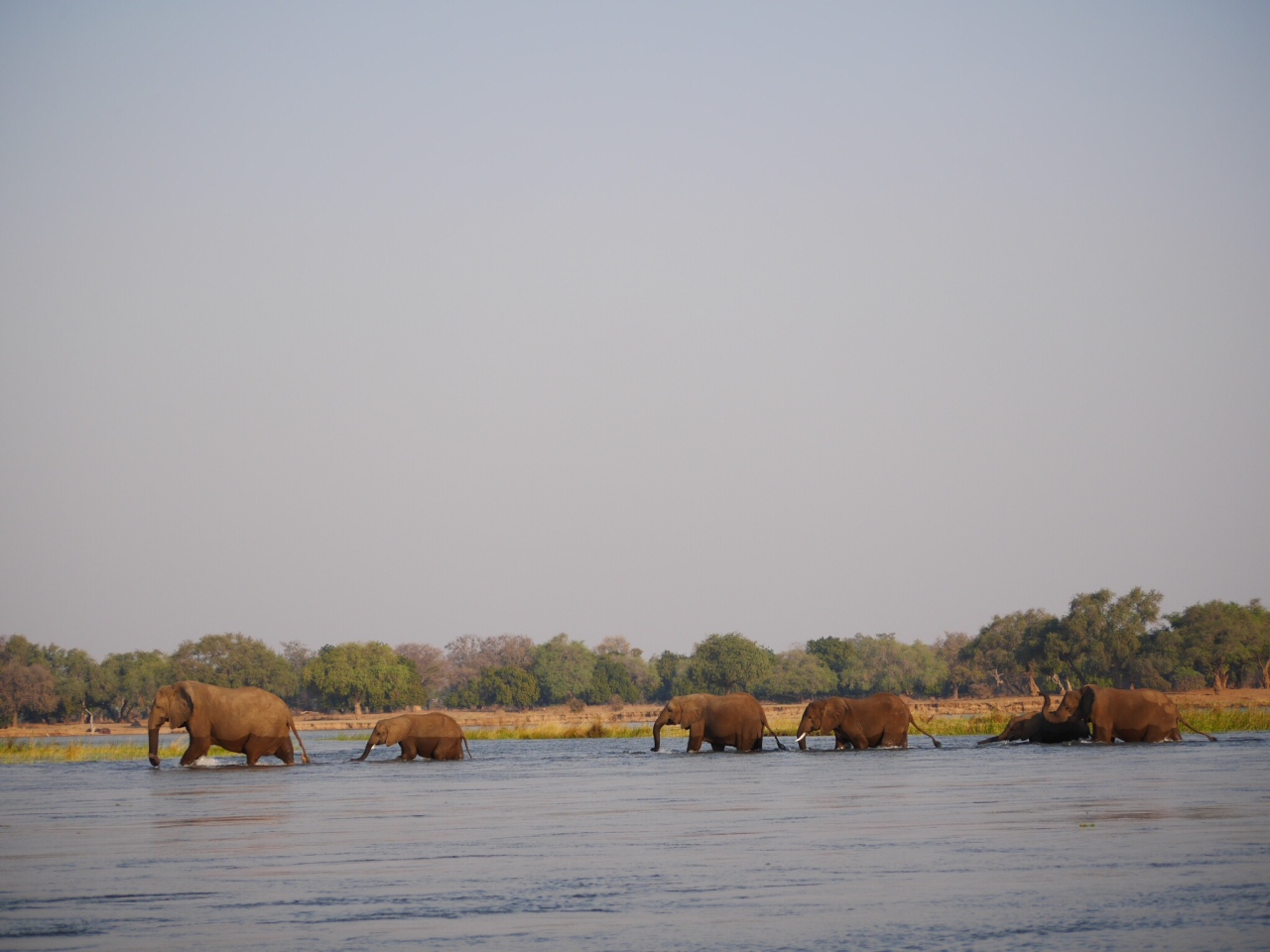 All eyed a crocodile on the bank somewhat warily. 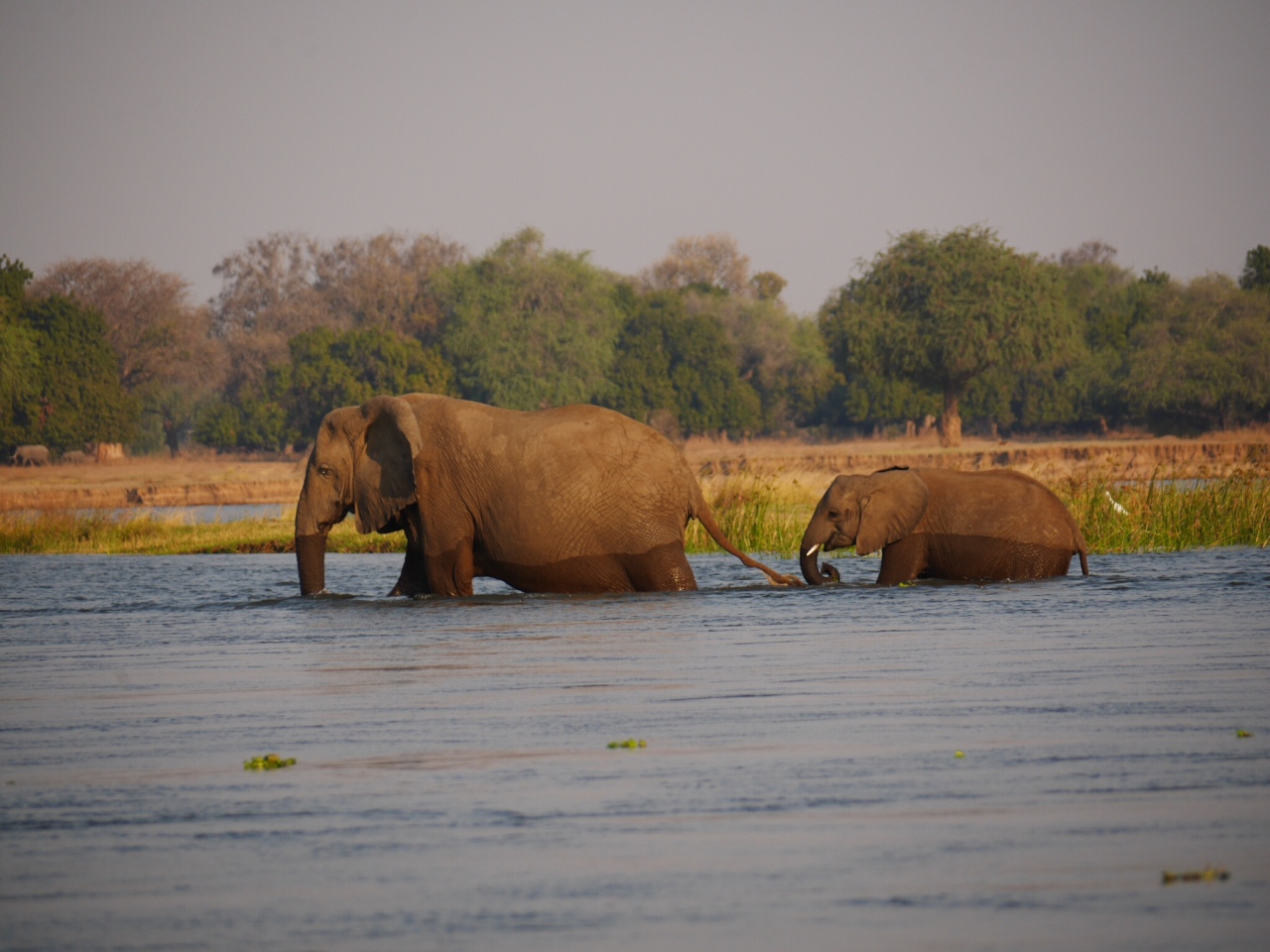 This was exactly what I’d hoped we would see here and I’m so glad we did.

On we went over the unruffled river, pulling in every now and then to see the animals on the bank.

Akim and Douglas were lovely hosts. Thanks guys.

By the time we got back we’d been out for nearly ten hours and after a quick beer on the deck overlooking the river, we cooked supper over the fire in the dark as the crickets struck up again.