Of crocs and crossings…

Brett was fairly clear that we needed an early start today. “We’ll probably leave around 9.30” suggested Philippa. “I’d prefer 8” said Brett “That way there is more time to get you help if something happens”. OK then. It turned out to be about 8.30 in the end, after hearty bowls of porridge and coffee and packing up the tents and checking the tyre pressures and all those other things that conspire against timetables.

The day starts early anyway with the hippos giving way to an orchestra of birds wheeping and whoopling and urging us to “drink laager, drink laager”. Or possibly “work haarder, work haarder”, depending on your persuasion. The Vervet monkeys leap into action before six, sending leaves clattering down onto the car and our tents. So by six thirty it feels like we’ve had a lie-in. For the non-teens in the party anyway.

We said our goodbyes to Brett and Lynn. They are the perfect hosts. Nothing is too much trouble and they clearly relish socialising with the guests. They are definitely people people.

The track towards the Zambezi National Park seemed much less forbidding in daylight. Skittish Impala leapt over the track and big Kudu watched us for a bit, pretending to be bushes, before bolting into the scrub. With the low sun lighting everything with a warm peachy glow it was a beautiful start to the day. We passed elephants grazing just meters away from us. There were plenty of them in all sizes. Sometimes we slowed or stopped to watch as they ate and they tolerated us to an extent. But there is always the thought that when you go around the next corner they could be in the middle of the road. And around the next corner, there they were; a small family group. We stopped and backed up sharply. Hmm. What to do. They weren’t going anywhere and we were. Thankfully there was a flat plain on the other side of the road so we veered off into that, giving the elephants a wide berth.

The track through the Game Management Area was a game drive in itself and then we reached the tributary of the Zambezi that marks the border with the National Park. Looking down onto the grassy river bank we saw a big croc sleeping and a huge hippo grazing, happily oblivious to us.

Further on was the Chongwe river crossing (“seasonal” said the gps). 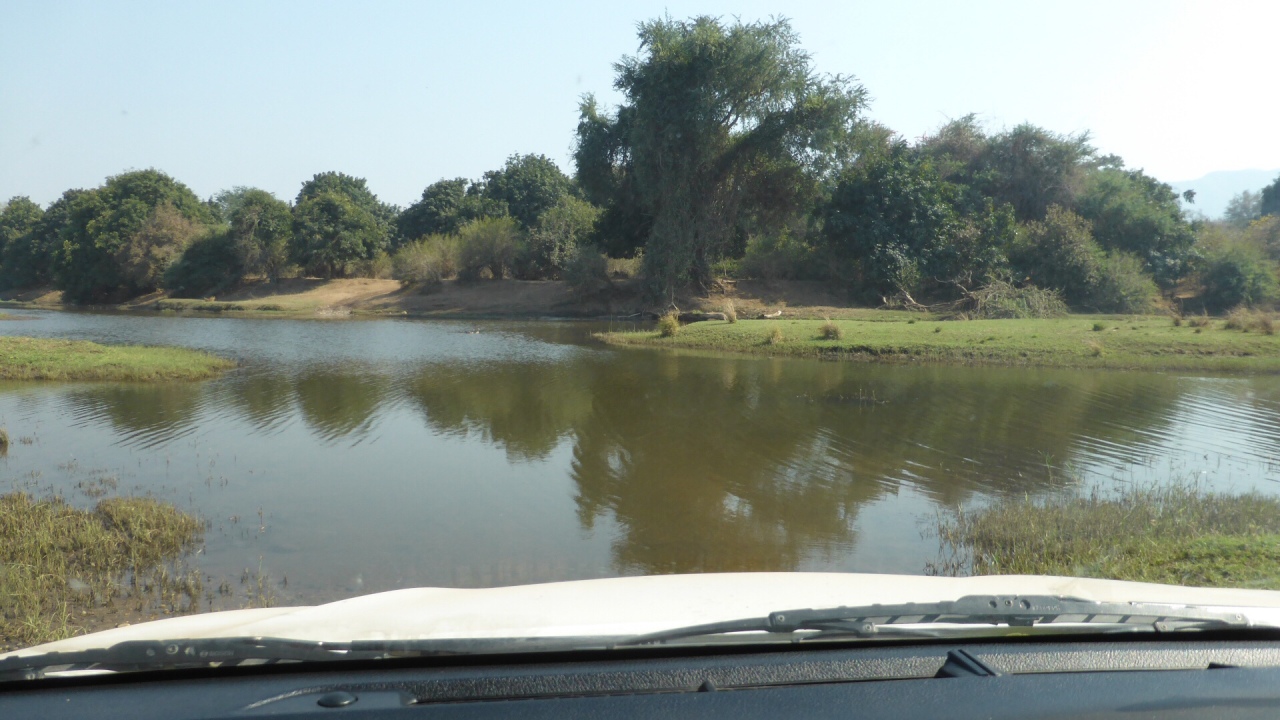 Usually, when about to cross a river in a four wheel drive, you should wade it first to make sure it’s possible. Here wading it first meant being a meals-on-wheels delivery for the wildlife. Looking at the map there was another crossing point back up the tributary where it was narrower, but it was a smaller track and would involve crossing two bits of river rather than one. We were debating what to do and had fired up the satphone to get some advice from Brett when a game drive vehicle appeared on the other side of the river and crossed it. It was pretty deep – almost over the wheels and his vehicle was equipped with a snorkel air intake (ours wasn’t), but the track through seemed more or less straight and it wasn’t too rocky. OK, if he could do it, so could we. 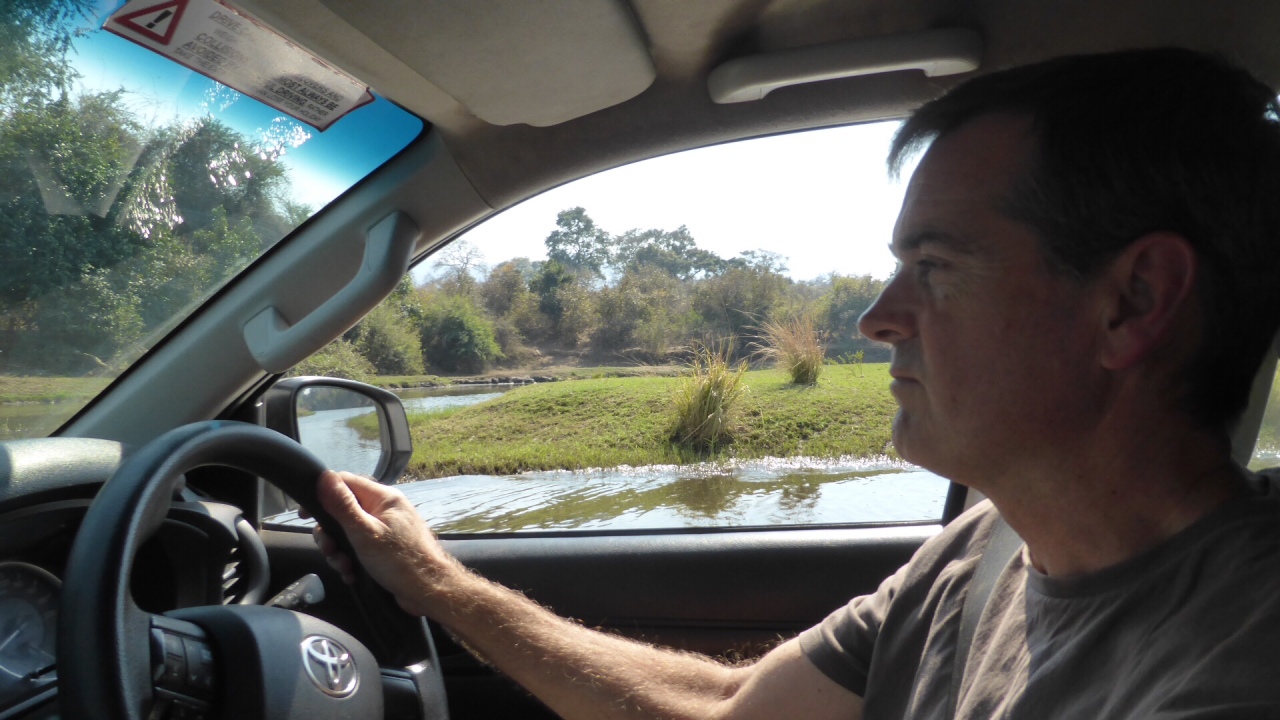 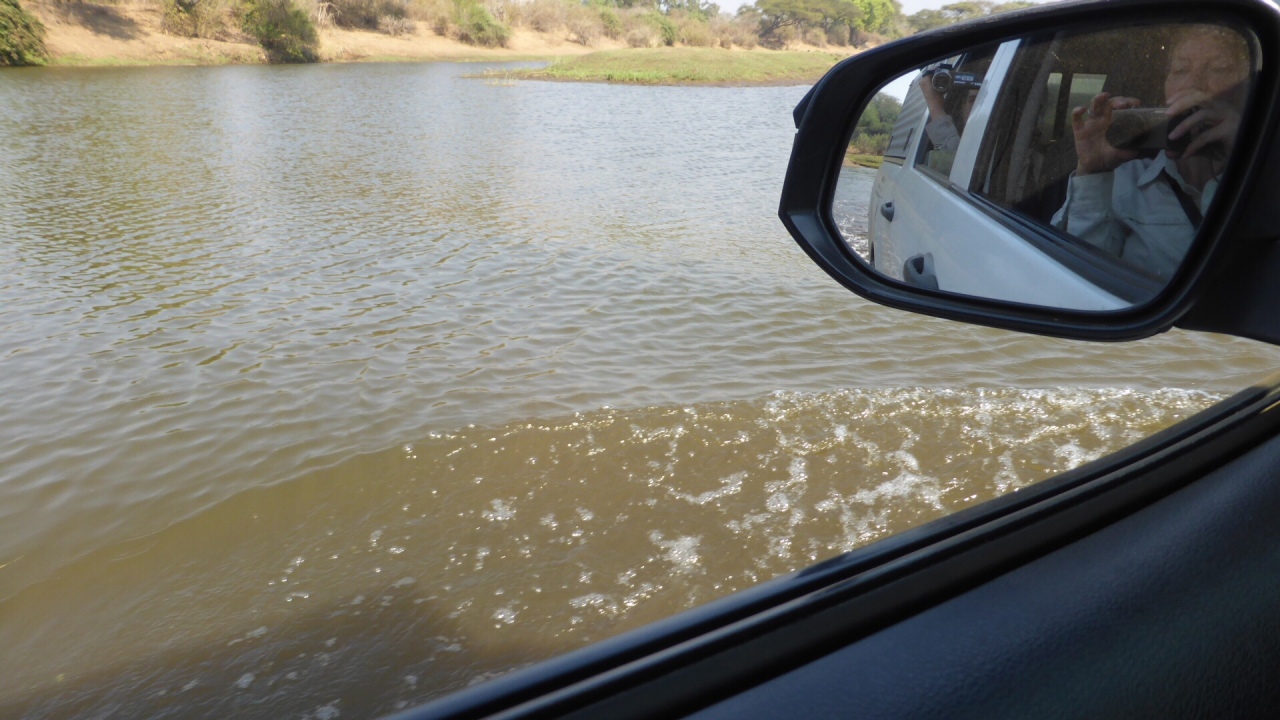 There was a moment when the Hilux was pushing a bow wave ahead of it almost up to the bonnet that I glanced over at the sleeping crocs and realised that if we stalled here, things could get, um, tricky. None of us said anything until we were climbing the bank in the other side and then, there were cheers and whoops and frankly, a big sigh of relief. 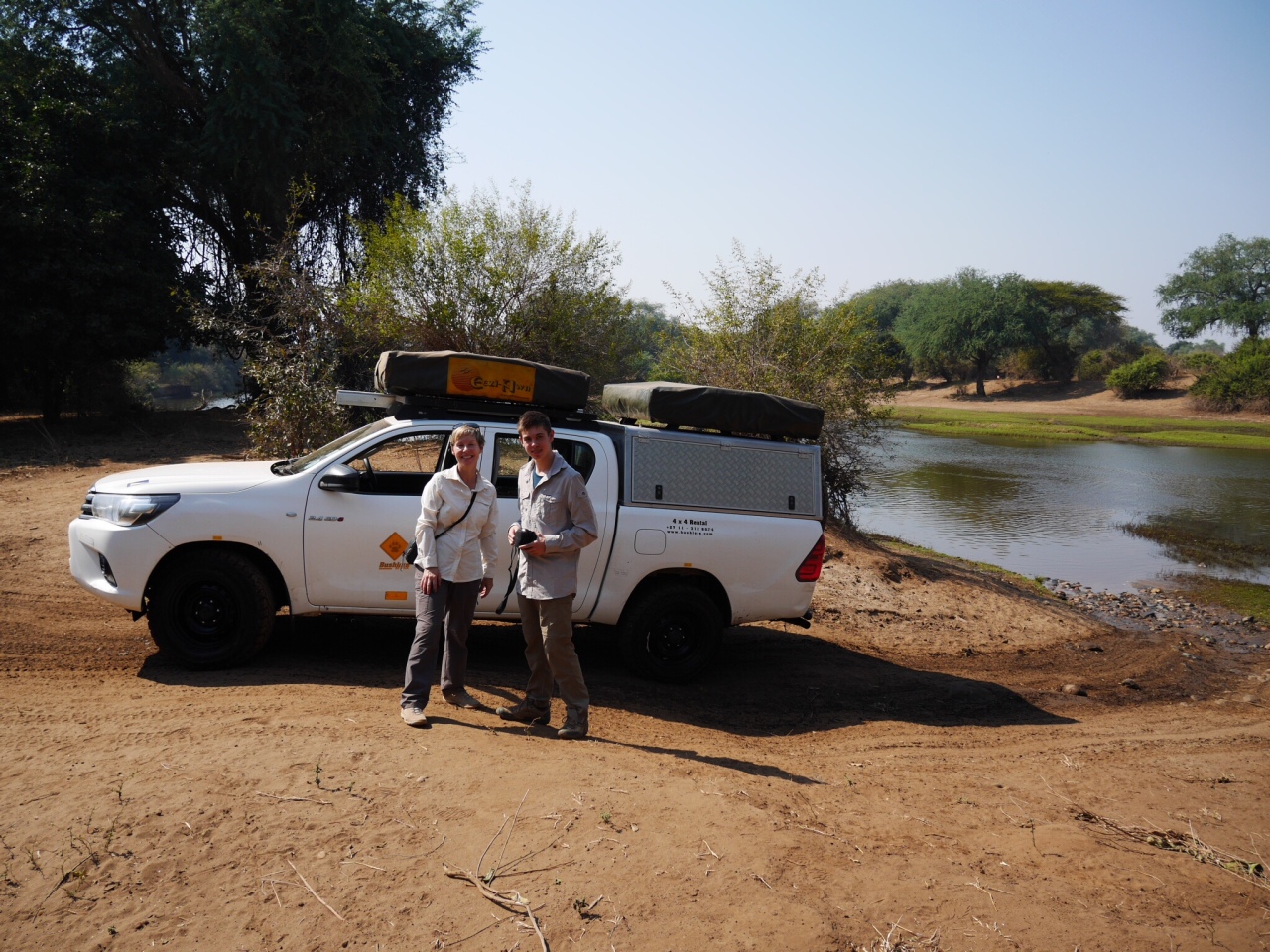 From there it was a short drive to the entry gate to the park. Two uniformed rangers took down our details with painstaking care. We were only the third people to go through the gate that day and they don’t usually get any more than five.

As this is not the kind of park where you can just go and wander about, they wanted to know where we were going. We told them we were crossing the park to Kapoche and they eyed us seriously. “The road is not good, but you can do it. You have four wheel drive yes?”. We knew that the only other possible track would take us north through the park to a main road. Well it would if the bridge had been repaired, but it hadn’t been for at least a year. Now we’d done Leopards Hill Road, the thought of a long day on a rough track many miles from the nearest settlement wasn’t as intimidating as it might have been, and with cheery goodbyes all around they lifted the barrier for us and off we went.

The landscape was remarkably varied. The track went from narrow and bumpy, through bushes that almost closed over our heads, to wide and smooth with open plains all around us and a family of warthogs rooting about.

There were baobabs and plane trees, then groves of palms at the edge of a sweep of marsh with vultures standing in the grass. And around a corner, elephants; a herd of about ten standing in the shade of a big tree, blocking the road.

They had little ones amongst them so they were not to be trifled with. Again we found a way around, but initially it took us too close and they all showed us their ears. We backed up again and found another route which they seemed happier with, but being watched by ten pairs of elephant eyes is still a slightly uneasy experience.

On we rattled, with the temperature climbing, weaving through thickets over track which was sometimes barely visible. Philippa said “This isn’t really a place for humans is it”. We came to an area of small trees which had been comprehensively chewed by the elephants and they’d pushed one good sized branch across the track. It was too big to snap, so I broke out the axe, as you do, and chopped it off.

We had to move more brush from the track a bit further on and it was clear that this was a road less travelled.

And for about five more hours we had it completely to ourselves. Nothing came the other way, nothing appeared behind us. We were all alone in this big wilderness.

The deeper in we went, the fewer animals we saw. Occasionally there were impala but the elephants had melted away. Tall grasses grew down the middle of the track and brushed the sides of the Hilux. 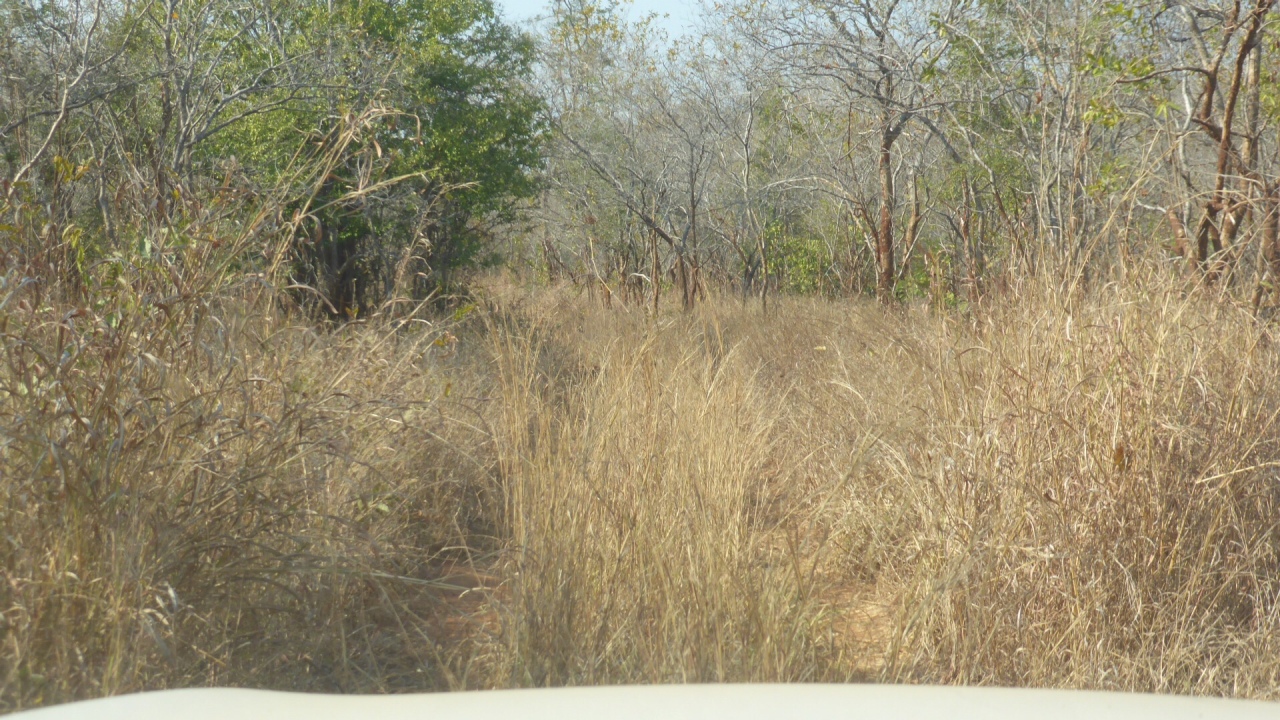 Frequently we dipped alarmingly steeply into dry gullies full of sand which sucked at the wheels and made climbing steeply out a challenge. The gps ticked off the kilometres slowly. Just after one o’clock we stopped in a shady place on the track for lunch and I saw we still had 70K of this lonely drive before we would get to Kapoche.

After a while, driving through this challenging landscape became second nature and I was barely even thinking about when to change in to low-range 4×4 and when to switch back and we were all playing “twenty questions” while slip-sliding up and down steep sections of track.

Fifty K further on we saw clouds of smoke blowing through the bush and saw a tree root on fire by the road. A little further on a grass fire was licking at the edge of the track and we sped quickly past the flames, no time for a photo. Thoughts about What Would We Do if we got cut off remained unsaid, but were there all the same.

It was hard work and as the sun began going down and we reached a village of conical thatched mud-huts it felt good to be back in civilisation.

A string of these villages lined the final few K and there was a good deal of waving and smiling and hello-ing. People were completely friendly and not a little surprised to see us. Off in the scrub, boys played football. 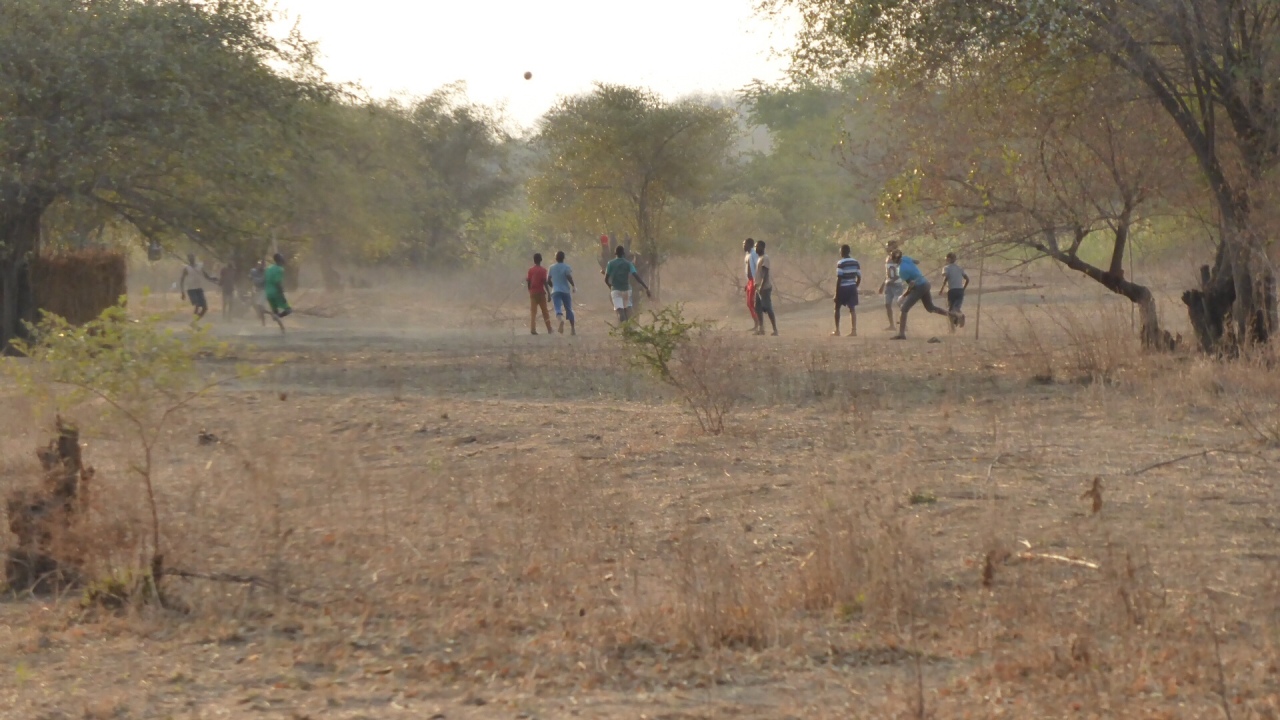 At Kapoche, we turned left onto a smooth sweep of new tarmac, amazed at the silence of it. It was that busy time before sunset; people were walking by the side of the road some carrying firewood on their heads or buckets of water, others just chatting. Chickens made death-wish dashes across the road, goats nibbled at things on the verge and we slowed down to pass.

Just before Bridge Camp we passed a hillside covered in rivulets of flame. The air was full of smoke and it was a dramatic end to the day. 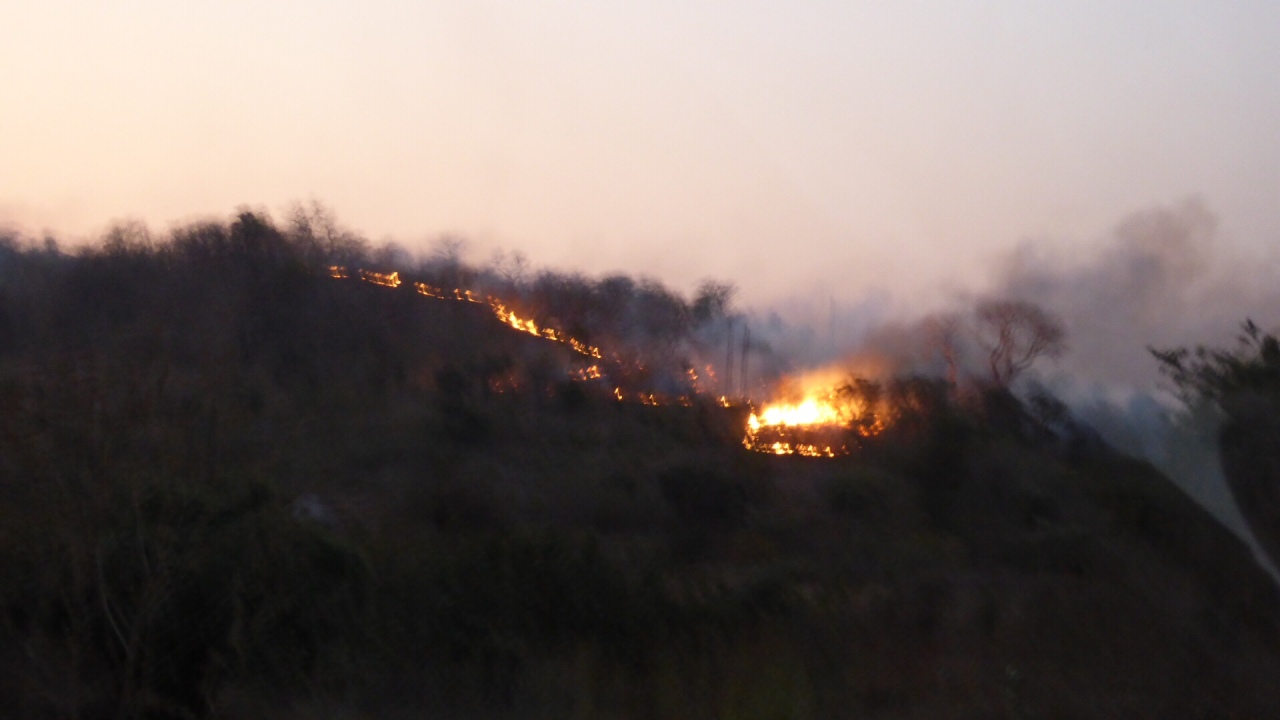 We pulled into Bridge Camp just after six and ordered some supper before wearily popping-up the tents. The manager didn’t seem bothered by the inferno a couple of K back down the road. “They set the fires to clear the land and it spreads” he shrugged.

P and I had beers and T a Sprite to celebrate having made it through a long and difficult drive. The manager was surprised that we’d done it and it sounds like not many do.

Crocs, crossings, elephants, wildfires, and solitude in a huge wilderness. Quite a day.