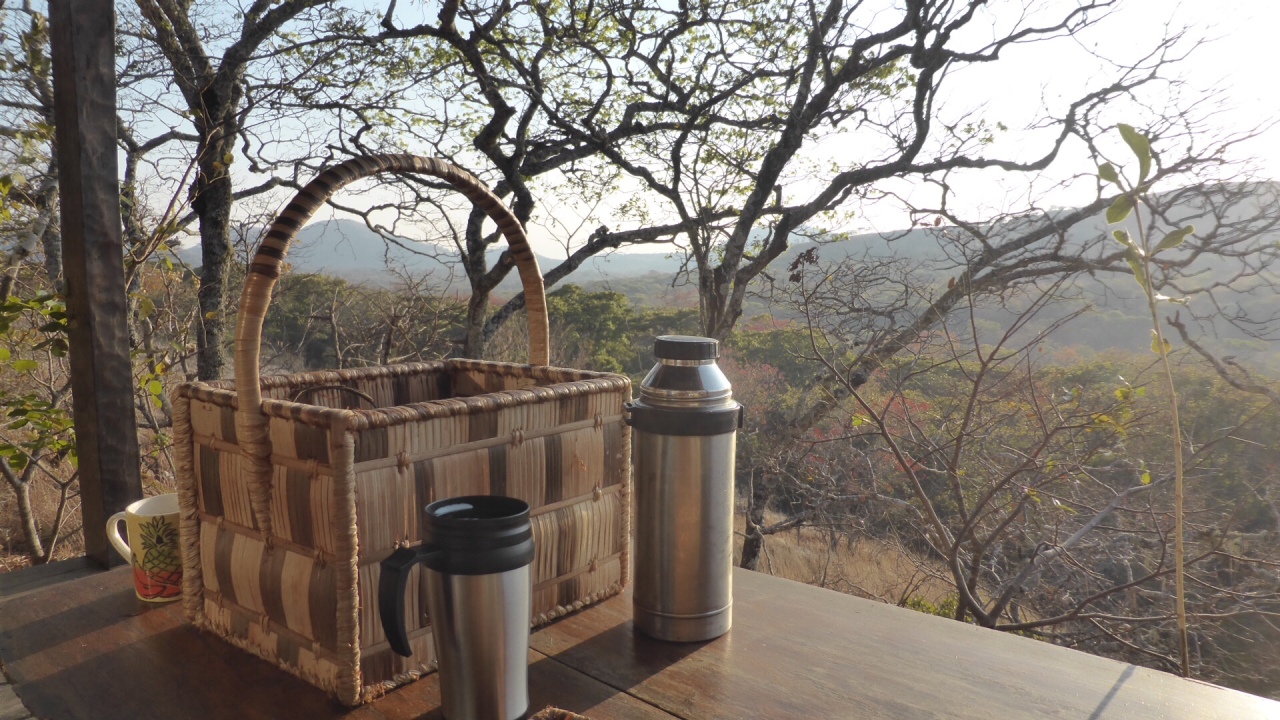 It was so nice to have another day at Mutinondo. It’s such a peaceful place with no pretension about it. People come to relax and walk and admire the scenery and we did a bit more of all of that after our tea delivery and then another hearty breakfast.

Hyrax Hill is a rocky outcrop we could see from our walk yesterday, a few K further into the woods. Stocked up with sandwiches we set out in a cool, slightly overcast morning. 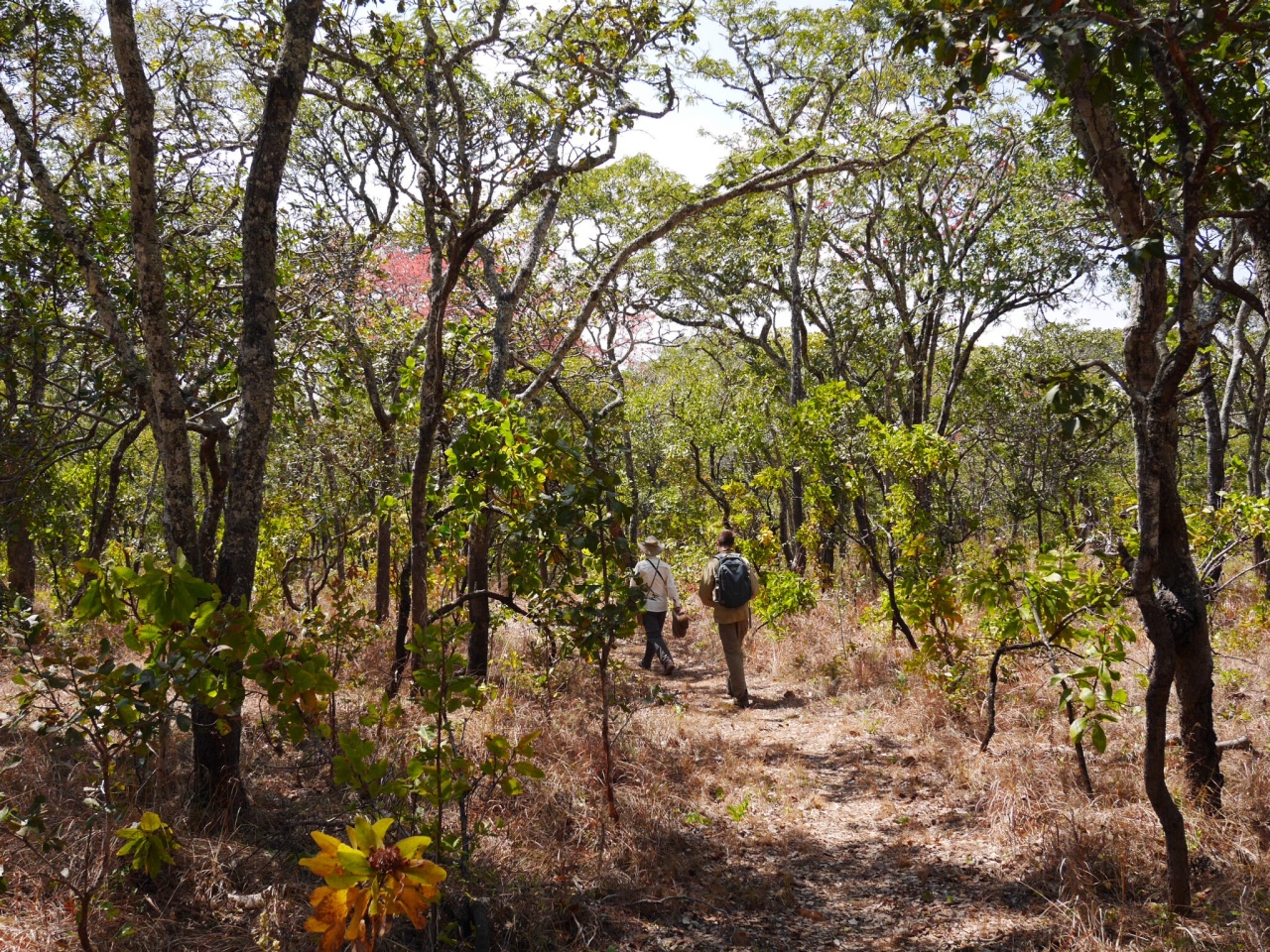 We retraced the early part of yesterday’s route in woods that were almost silent. There are animals here – antelope mostly – but they flee long before we get anywhere near them. We heard a Bushbuck barking on our walk yesterday, mistaking it for hyena. Jeff told us he regularly hears hyena and there is a leopard that walks through the area where the staff live quite often. They see the prints but have never seen the animal. Poaching is still a problem here because Mutinondo borders the South Luangwa National Park. Rangers patrol it and have caught someone every month this year.

It’s a problem on the Shiwa Estate too. When we arrived yesterday an enormous ridgeback dog appeared with a terrier and a labrador. Charlie Harvey told us his estate manager had been out with them overnight tracking a poacher, who they eventually cornered. The man had a shotgun which he swung at the ridgeback and it mauled him. He needed eighty stitches and will get a mandatory five year sentence for poaching. Bushmeat is big business apparently.

Our walk was altogether quieter. 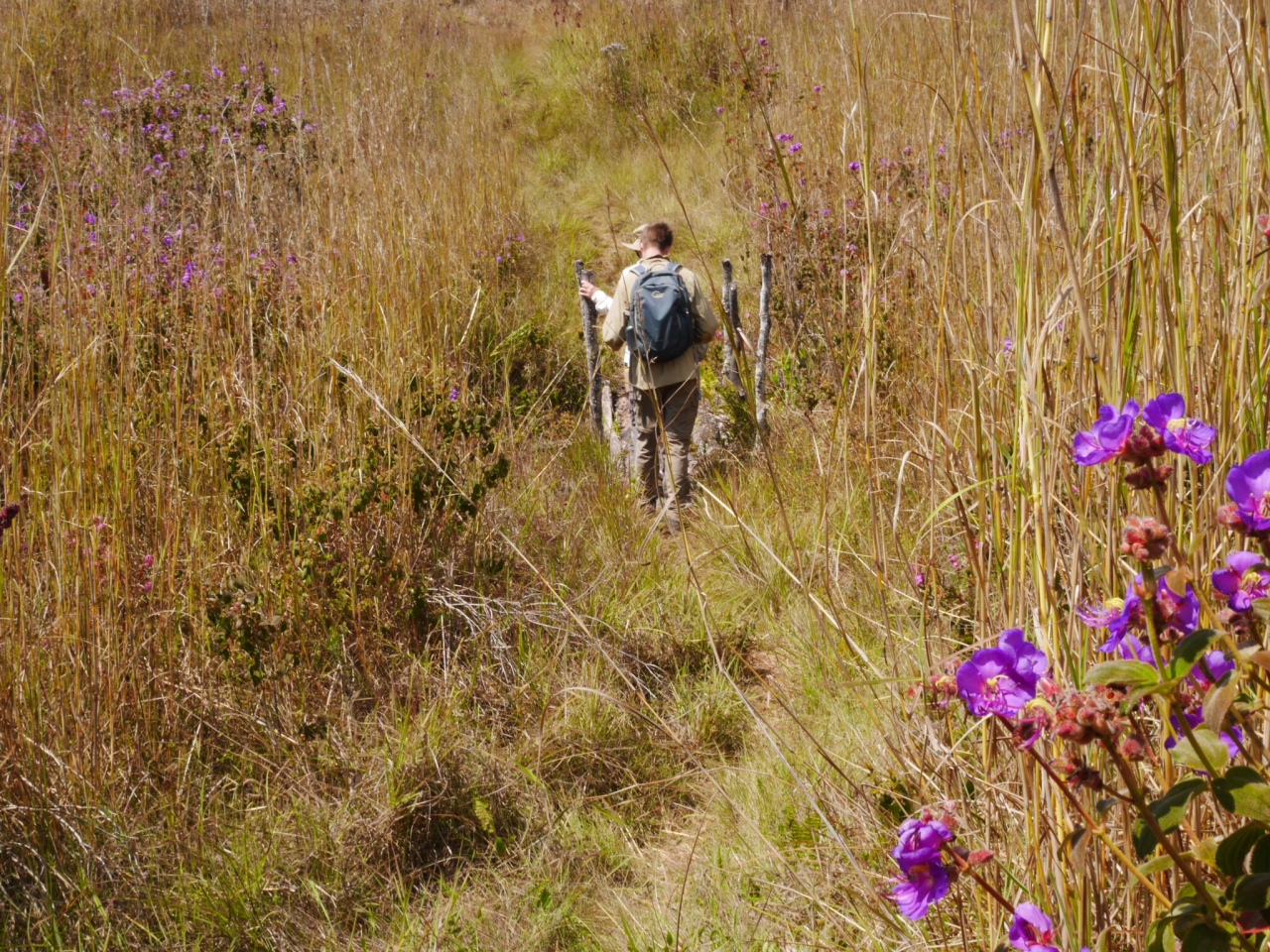 The woods are filled with flowers even at this time of year, and as my mother is a botanical expert, I shall label them clearly below… 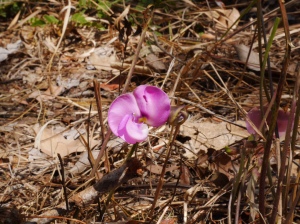 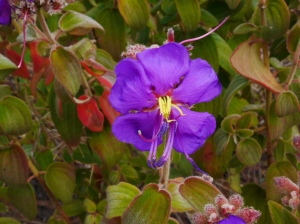 Another purple flower but with yellow stamens 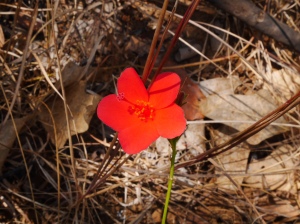 This one is red

In the rainy season the place bursts into life. People come then to admire the profusion of orchids and the huge range of fungi – including the world’s biggest mushroom the size of a dustbin lid (a bit leathery to eat said Jeff).

We arrived at Hyrax Hill and eventually found the rock art. There were just a few handprints (?) animal prints (?) which are apparently Neolithic and have somehow survived wind, rain and sunshine over all the years since. 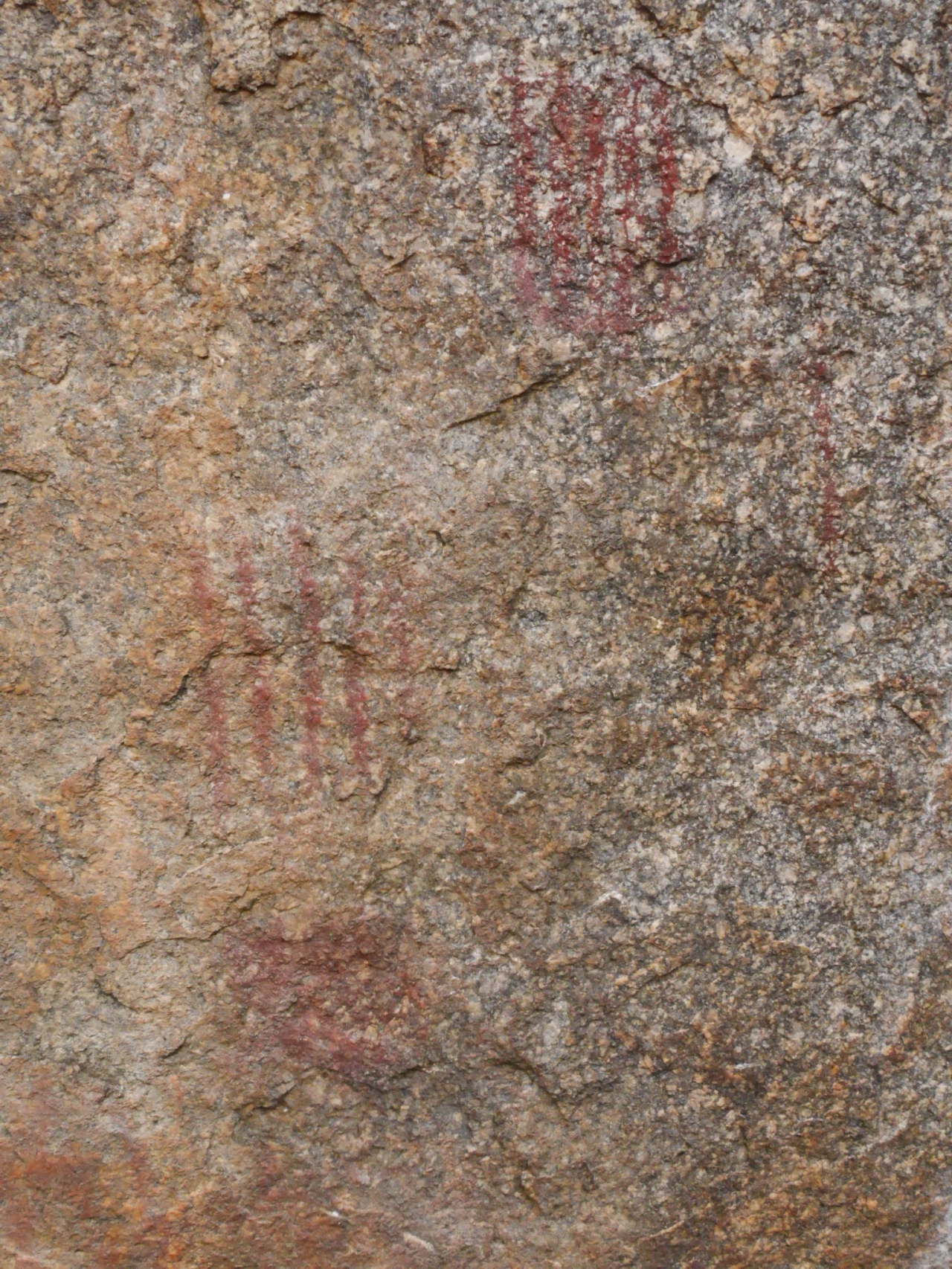 It feels like a place that was important once. A grouping of rocks, slightly higher than their surroundings close to a couple of small rivers. 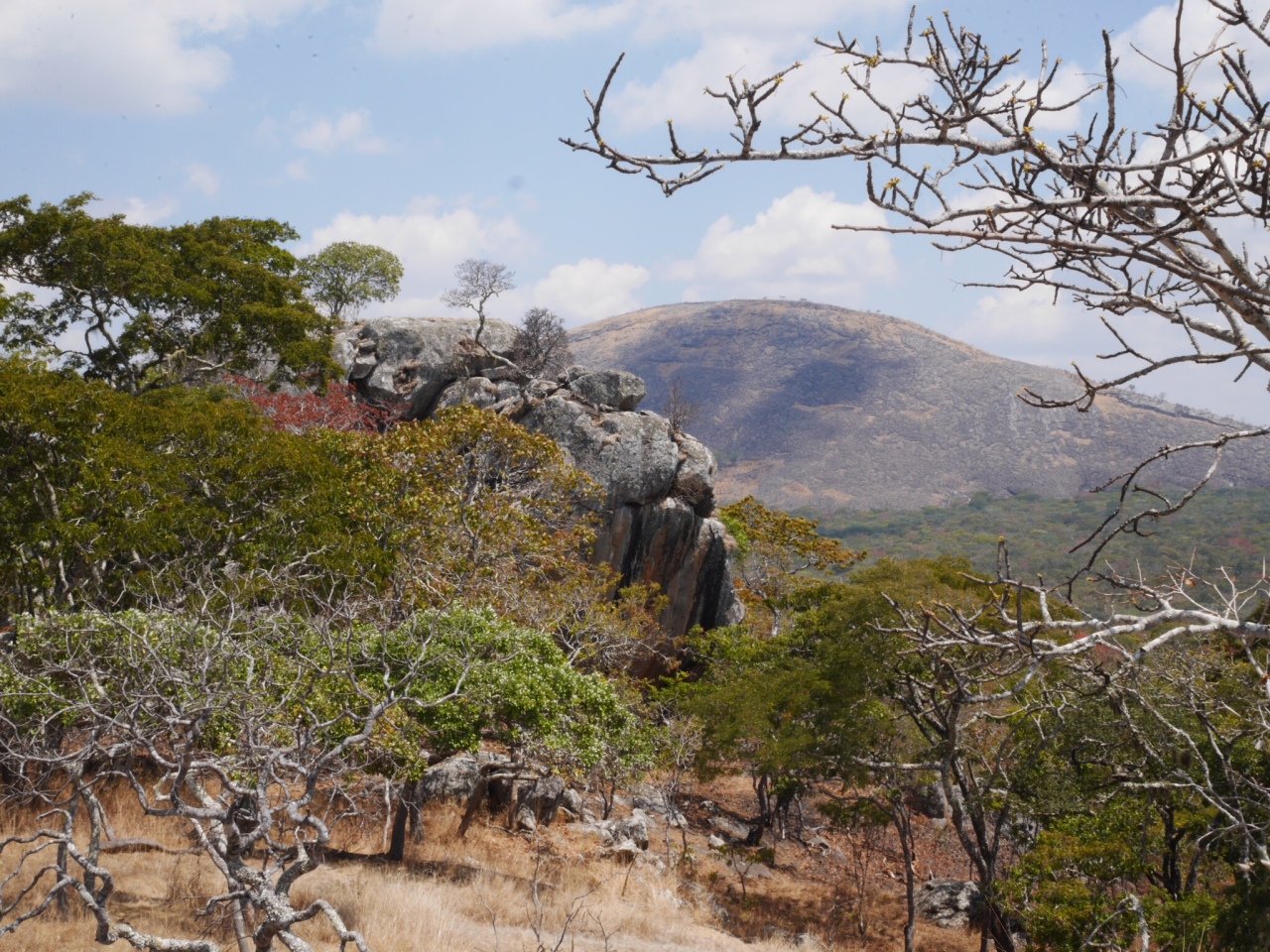 We explored for a bit and admired the view before heading back into the trees. 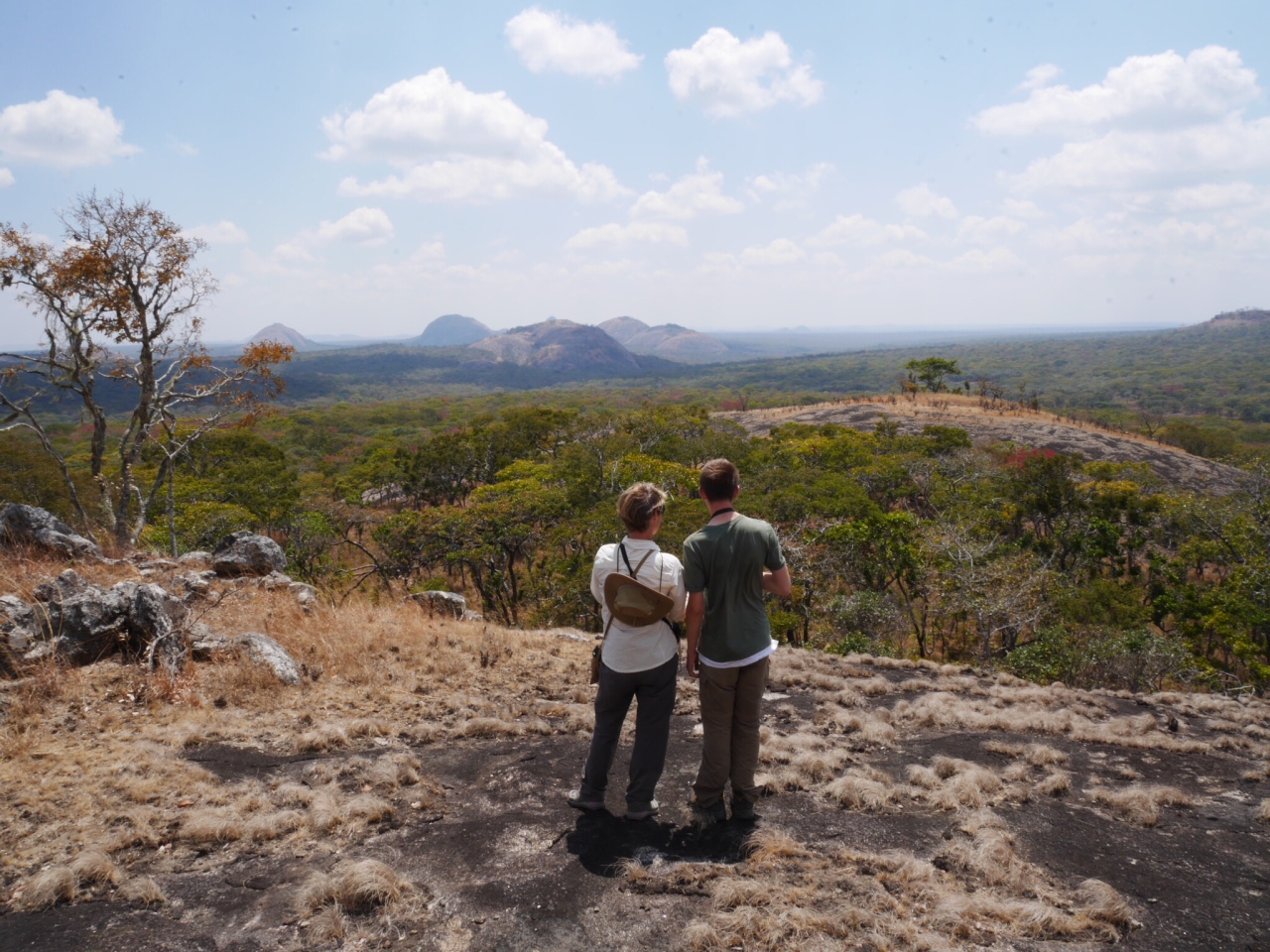 After another hour or so we came to Paradise Pools. 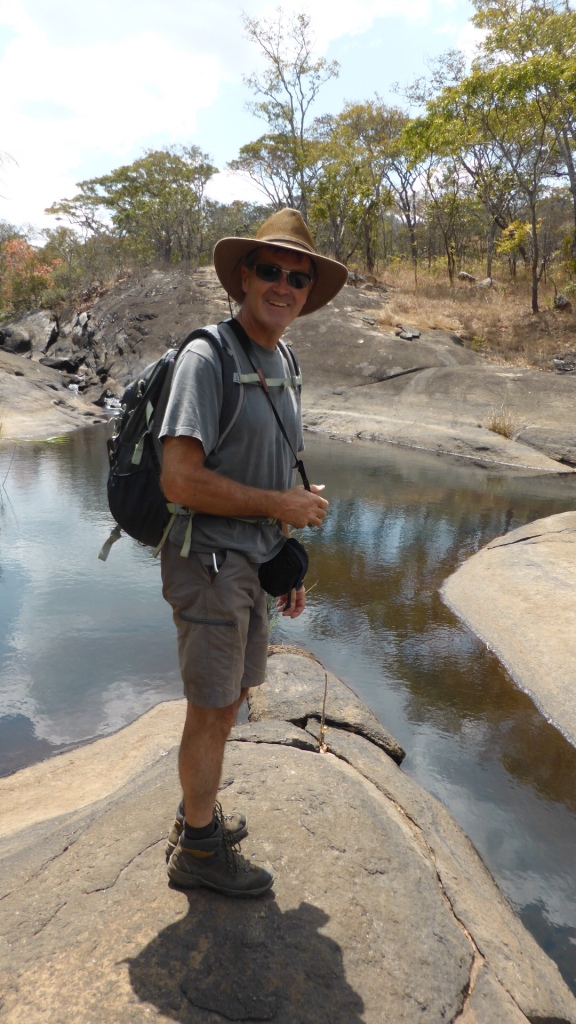 They are fed by a crystal clear river and just about warm enough to swim in. Just about… 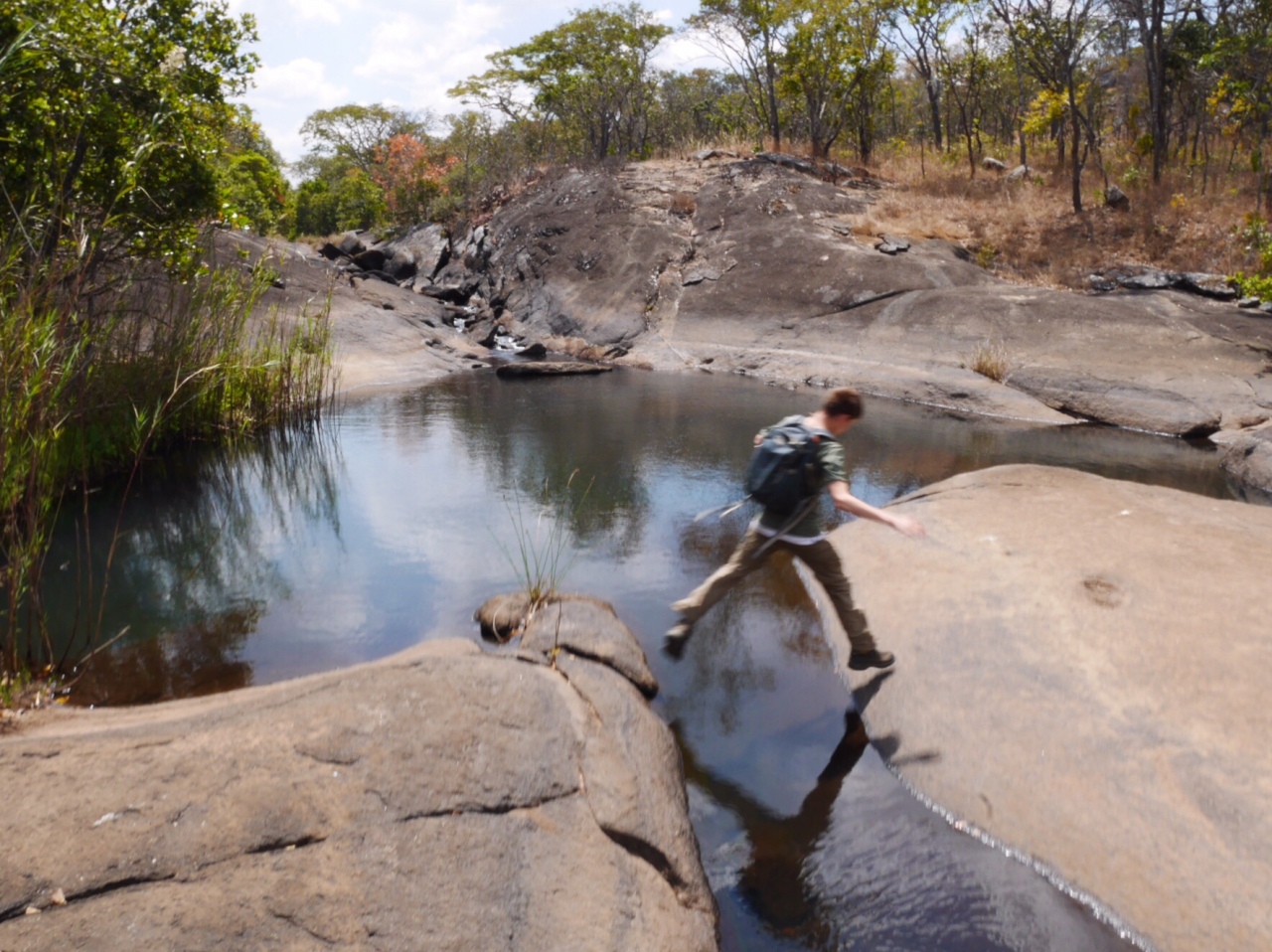 Rather than the “swimming” option, we took the “lazing about and having lunch” option. 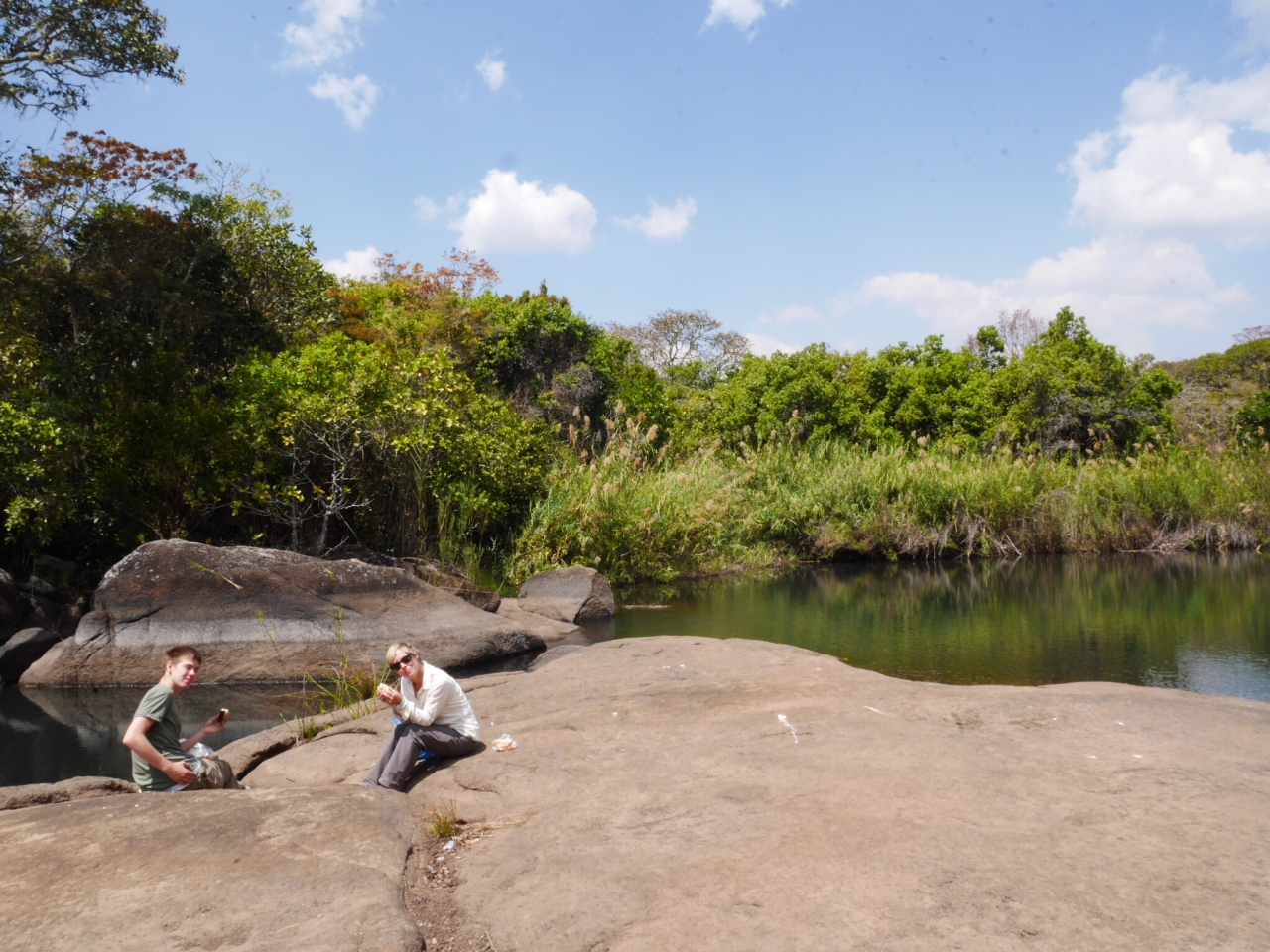 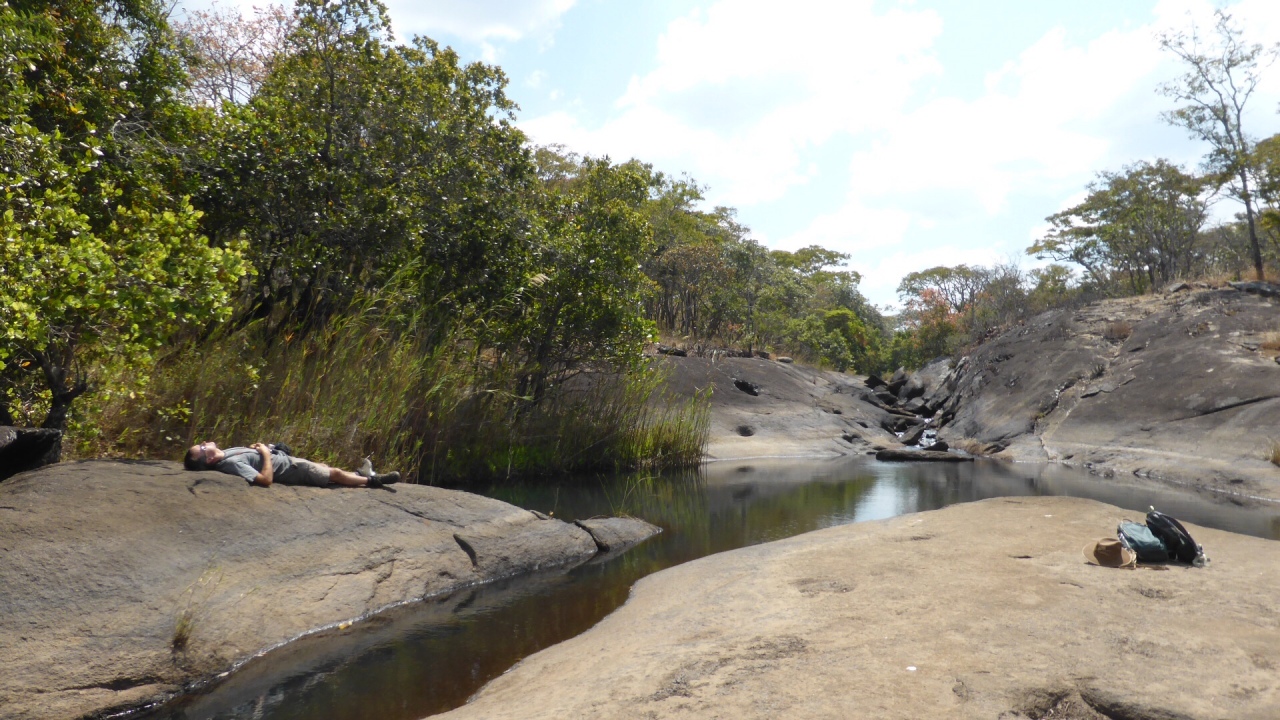 The route back was a path that followed the river which we couldn’t find at first and we ended up winding our way through a stand of alien looking succulents. 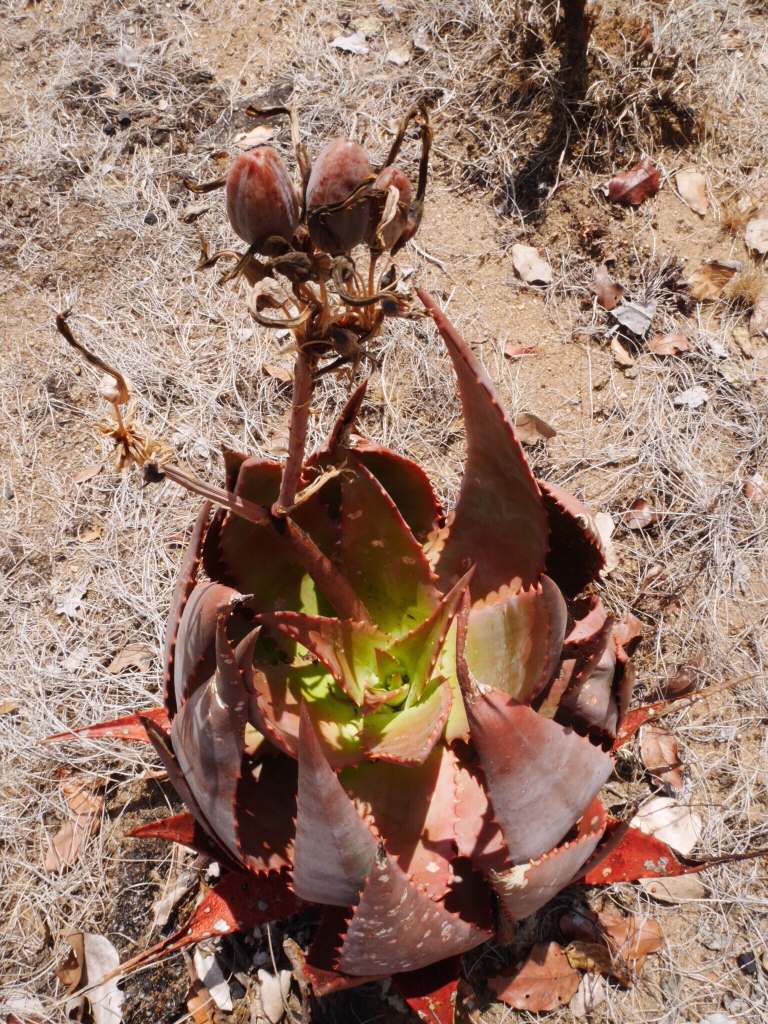 We found the path after half an hour of weaving through the brush by the river and it took us to a number of little waterfalls. 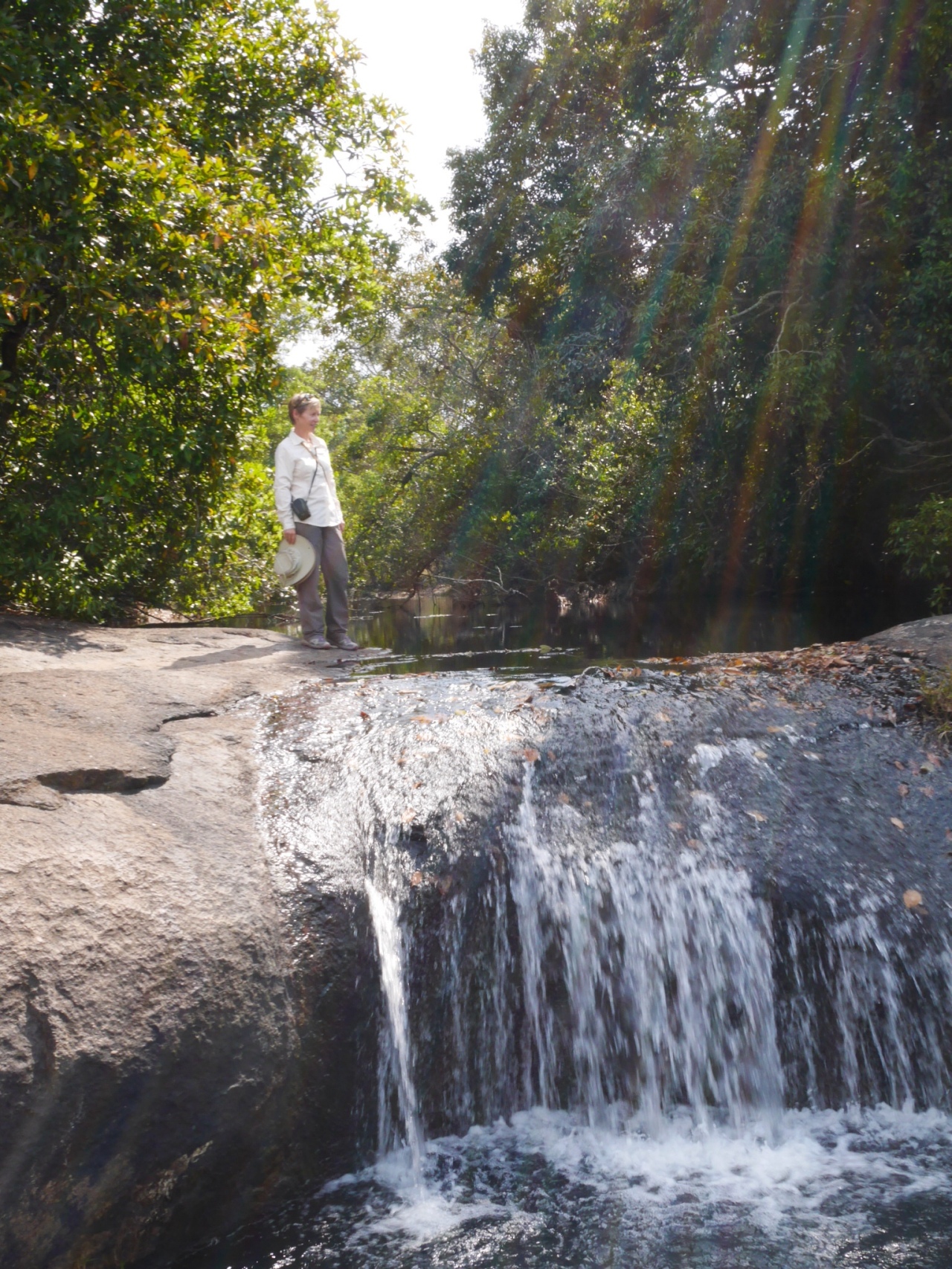 There were animal trails going down to the river and we heard baboons nearby but for the most part everything was very still. 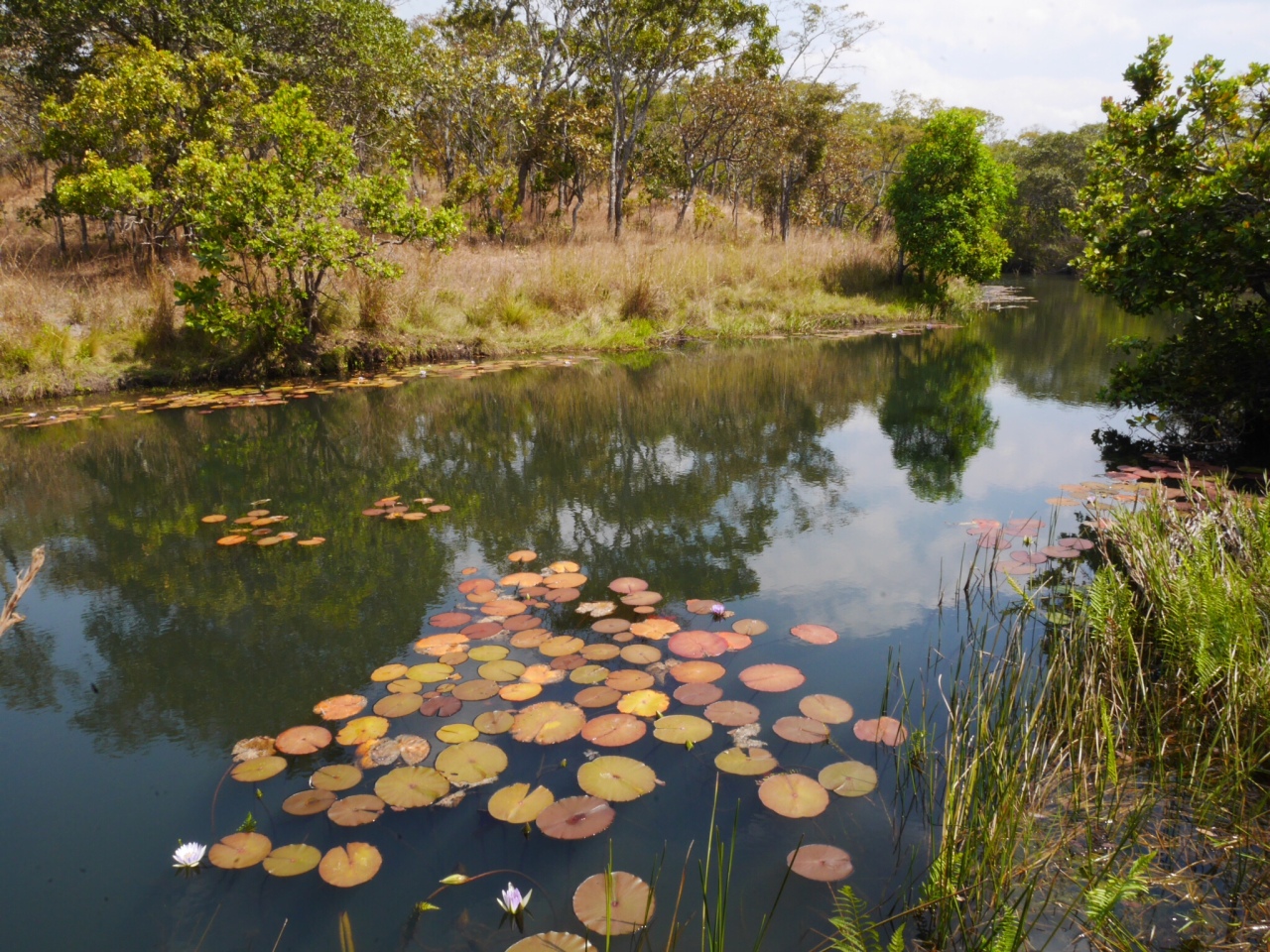 At the edge of the Mutinondo campsite we found a canoe and a kayak which are left for guests to use. 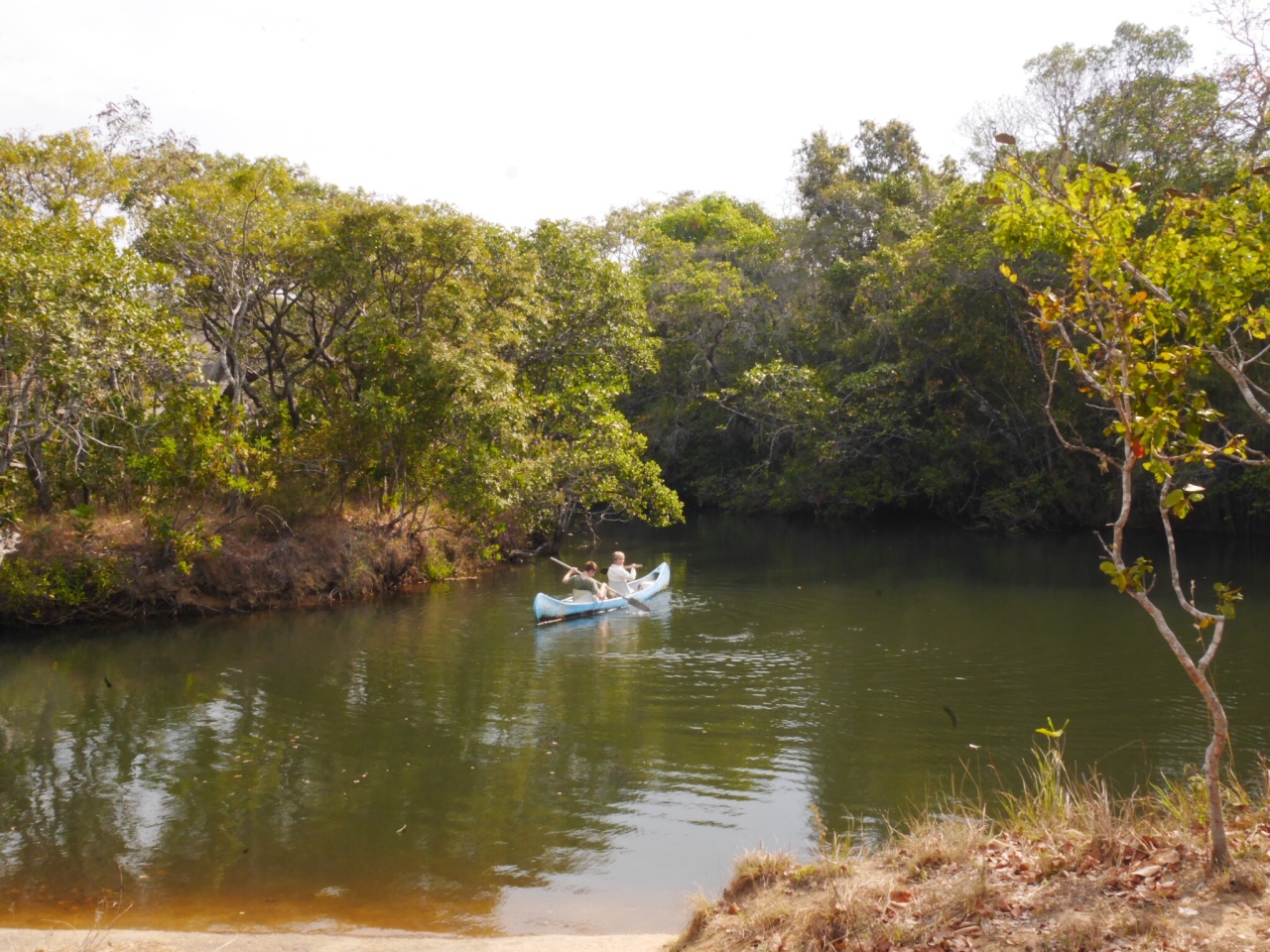 P and T successfully launched the canoe and the less said about me and the kayak the better. Suffice to say that if you try to sit in the thing when it is half in and half out of the water on a slope and gently push yourself in backwards, it sinks. Then, whoever is in it will fall out into the water and get completely soaked. Don’t ask for photos, they don’t exist.

After about 12K we were back in Harry’s Bar with sundowners. We’ll miss this.

And so to our last meal in the soft glow of the dining room. 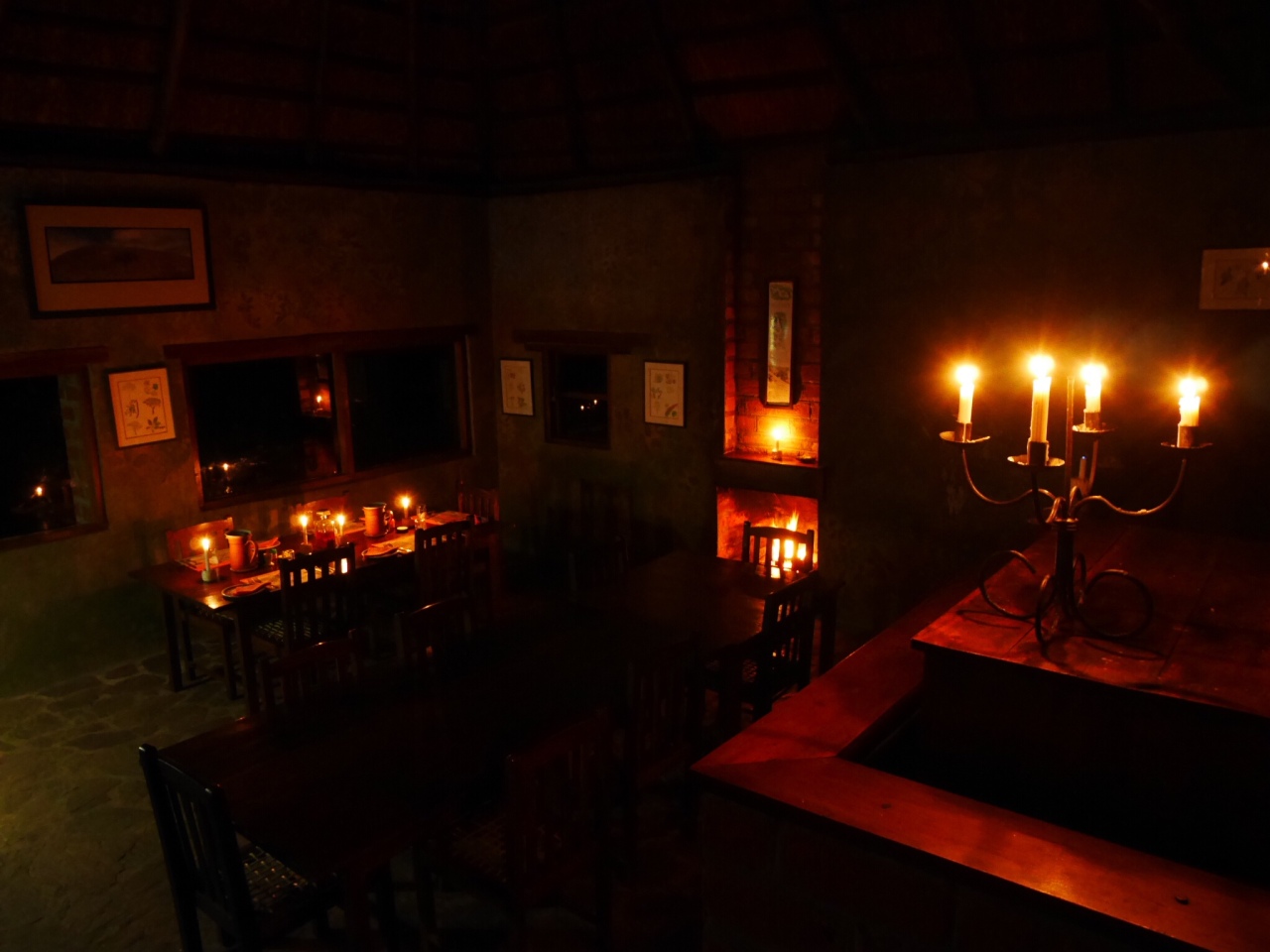 Jeff came and chatted to us for a bit, something he says he doesn’t usually do with guests, but it was really just him and us and it felt a bit like going to dinner at his house. He is a great character and we enjoyed getting to know him. Tomorrow, we begin the journey home.