Our chalet faces due east and the sun blasted in this morning like a spotlight. Our bed faces straight through the big glass doors and Philippa and I tried to hide for a bit, but when a basket with tea and flapjack was delivered to our little balcony outside we went out into the chill of the morning and let that blast of sunshine warm us up. Tom was having none of that sort of nonsense and stayed tucked up. 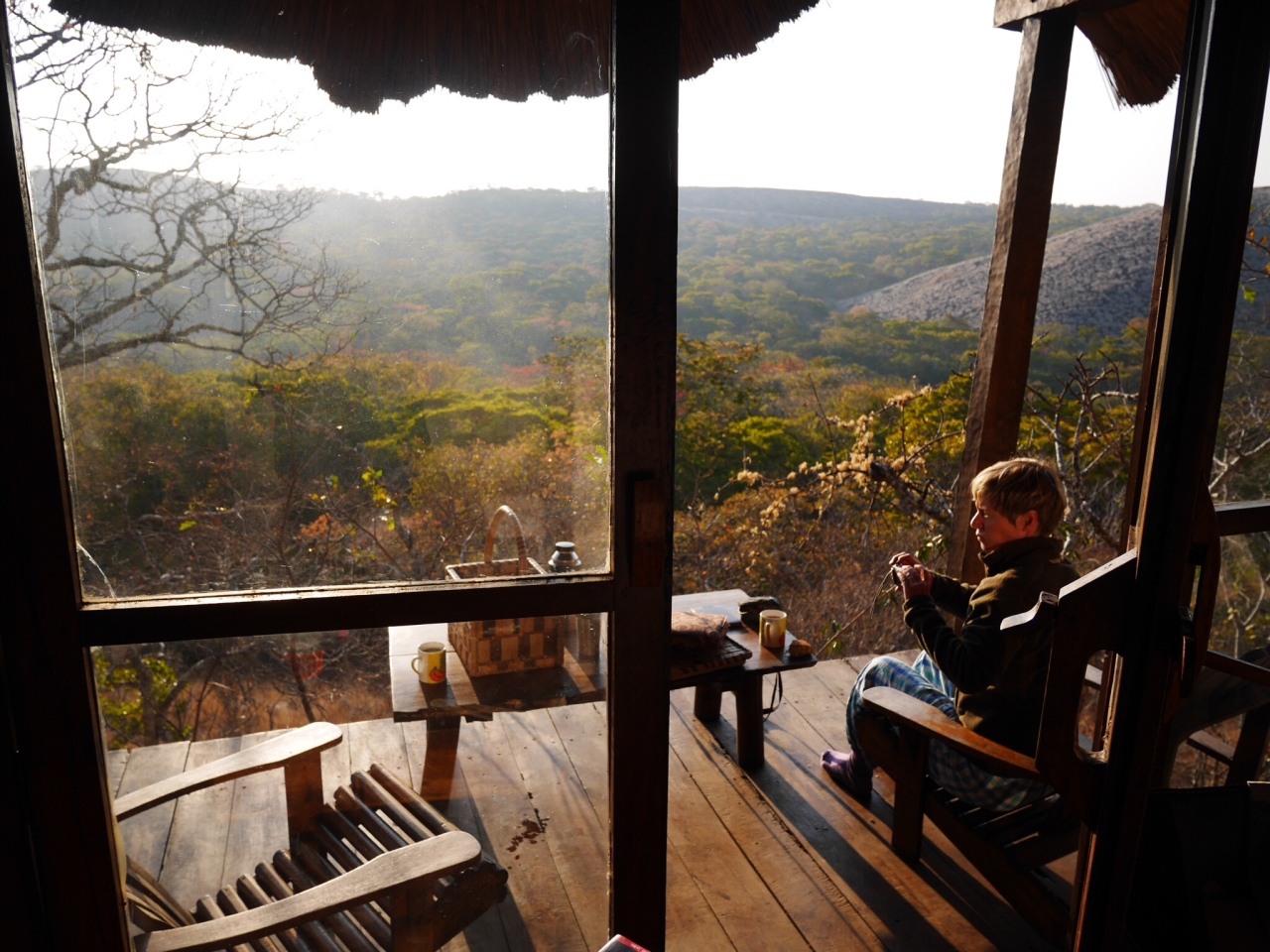 Breakfast was in an open sided thatched hut, looking down over the “whaleback” hills around us. We were the only ones there.

There’s a young Frenchman and a Dutch couple a bit older than us in the campsite but it feels like we have the place more or less to ourselves.

We returned to our little balcony with books and devices and whiled away the morning as the sun rose. When I wasn’t whiling, I was trying to solve the Engine Issue. I’d emailed Bushlore and had been hoping for a response this morning, but the WiFi wasn’t working, so I had another poke about in the engine bay and cleaned the car up a bit ready to give back at the weekend, hoping that the WiFi issue would resolve itself in the meantime. It didn’t. Jeff cursed it and tried restarting it a few times but it stayed dead, so I fired up the satphone. Eventually, after a lot of dropped connections I got through to Mark at Bushlore who said “Its probably the intercooler. Look for a pipe on the passenger side that has come loose”. And sure enough, there was a rubber tube the size of a short pipe cleaner attached to a sensor, that had popped off. I popped it back on and went for a test drive. It worked. Phew. I really hadn’t wanted to be battling with the trucks on the Great North Road with no power.

Back to whiling and lunch and then how about a short hike..? There are 50k of trails around here and while we had a longer one saved for tomorrow, there was a hike up one of the whalebacks which promised fine views.

The walk took us down to a bridge planked with heavy timber and then through the woodland, skirting a bald round whaleback which we assumed we would eventually climb up. Looming behind it was a much taller, narrower inselberg which we thought would be part of tomorrow’s hike and we were thinking how that would be a tough climb tomorrow then. Nope. This, it turned out was the destination for today’s little walk.

We left the tree line and found ourselves climbing steeply up black granite dotted with tufts of silvery grass. “Like walking over wigs” as P put it. Tom had already shot ahead and was almost out of sight, stopping every now and then to roll his eyes and mock the oldsters and their glacial pace.

Up on the smooth round summit the view was immense. An ocean of forest in every direction with whalebacks rising out of it. Here and there a river cut a swathe through the trees and a dried lakebed filled with plants glowed green in the sunlight. The only sign of human life was a wisp of smoke in the far distance. What a spot. 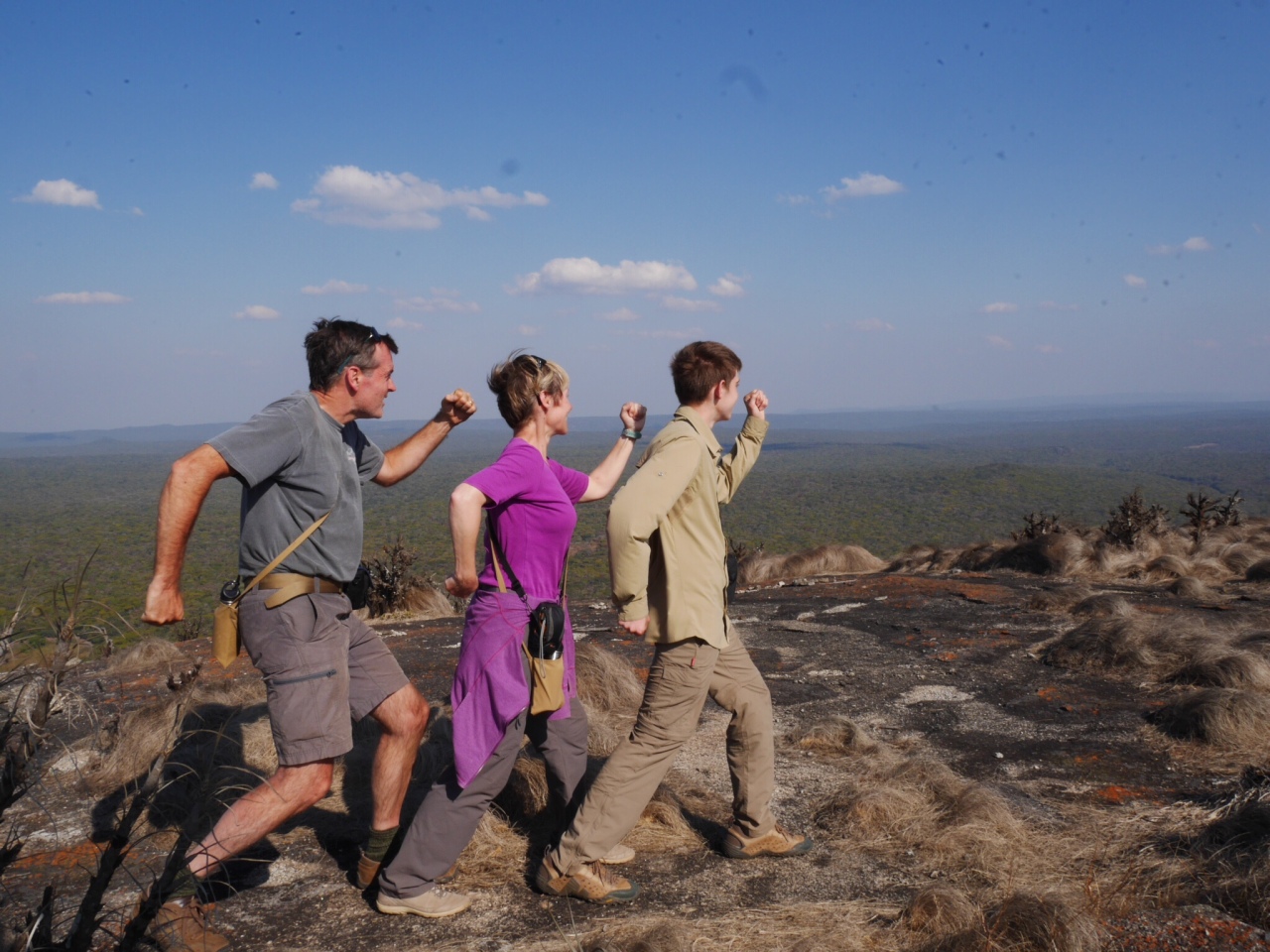 We walked back down, faces glowing in the wind and sun. 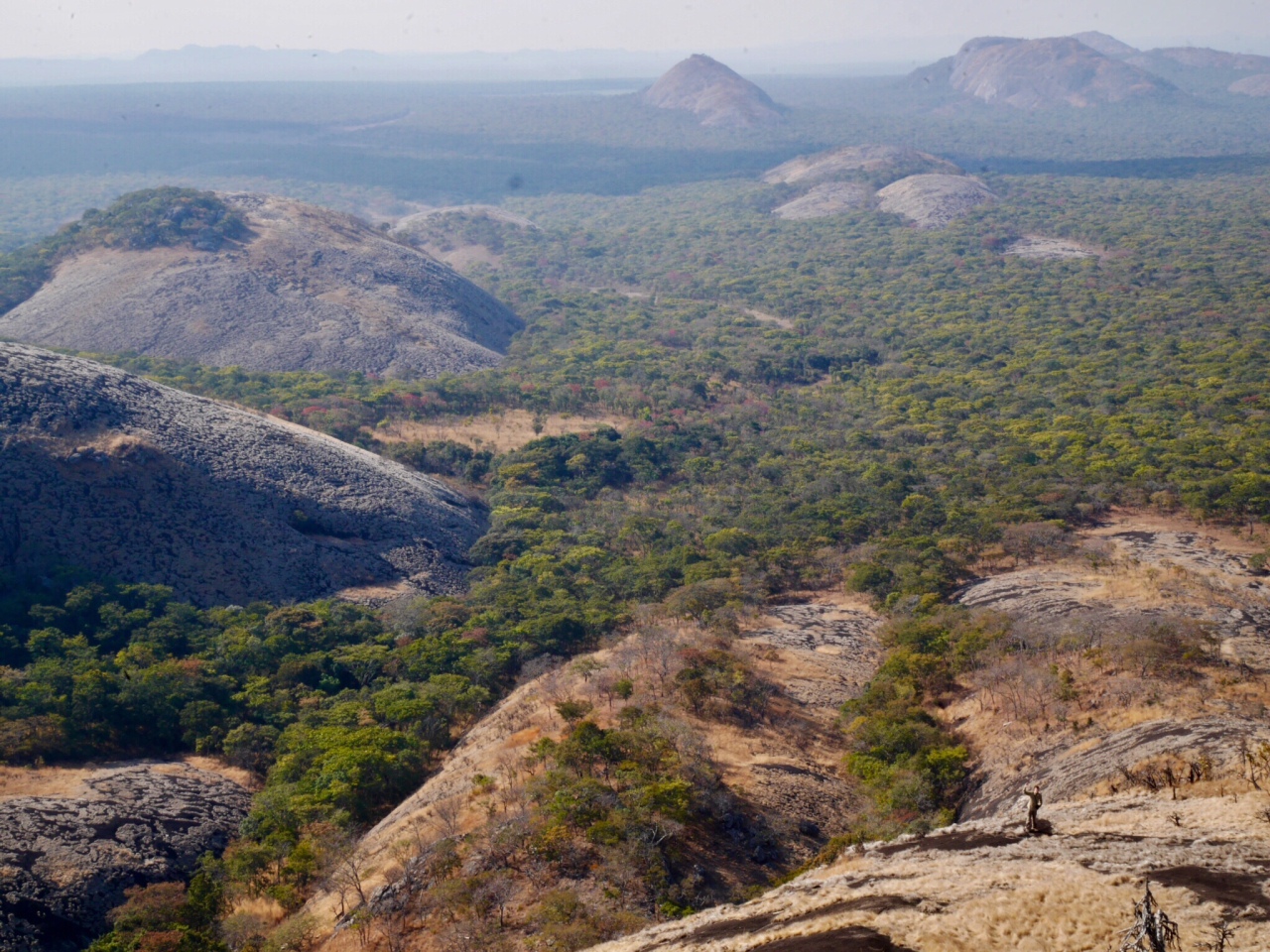 Our usual view of Tom on these hikes…

It was nice to get into the cool shelter of the trees, and back to Harry’s Bar for a beer with the sunset.

In the candlelit dining room we were joined by the Dutch couple and had a terrific evening. They’d bought a used Land Cruiser from Bushlore and spend three months a year driving around Southern Africa. We swapped stories about places we’d visited and grilled them about how they travel with thoughts of doing something similar one day. We had very similar mindsets and shared a love of deserts and mountains. They knew about camping in the Empty Quarter from when they lived for a while in Saudi Arabia, and completely understood our love of Oman. They had amazing stories of backpacking through China in the 80s when no-one spoke English, nothing was written in English, there were no guide books and it was incredibly hard to find out how to get from one place to another. We could have talked for longer but having finished eating some time ago we needed to let the staff tidy up and go home. Reluctantly we said our goodbyes and wished each other safe travels.

There is no light pollution whatsoever here and we walked back under an inky black sky sprinkled with brilliant stars and the long sweep of the Milky Way.