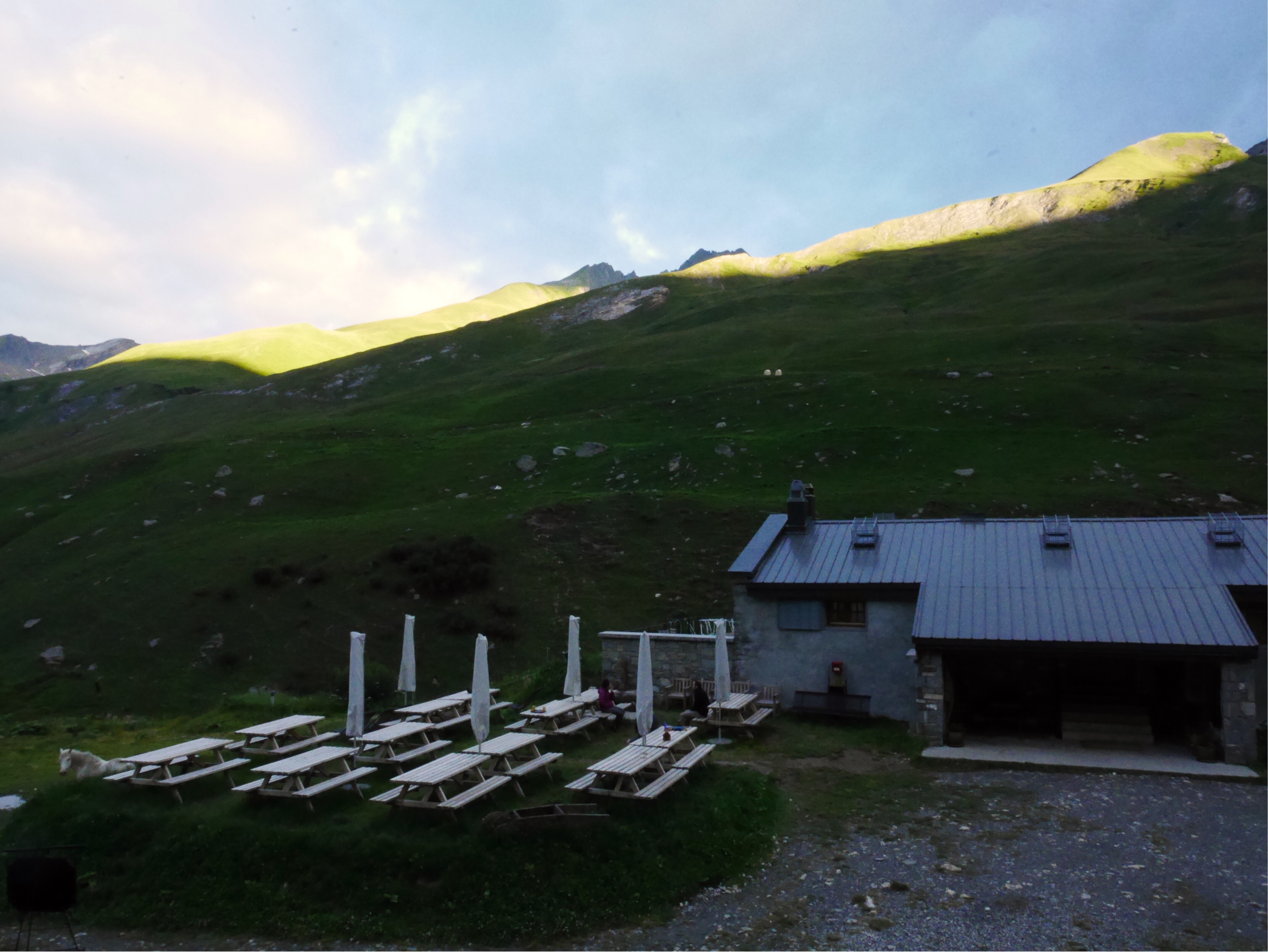 The sky was bright and clear when we got up for our unfeasably early breakfasts. The sun was lighting the mountains around us from the top down; distant high ridges glowing green while those below were still in shadow. The cloud had blown off the Aguille du Nord which towers over Les Mottets, revealing a sharp rocky summit. The air was cool and still and it looked like being a good day to walk into Italy.

The dining room was busy with people and it was another jolly mealtime with people swapping notes about their routes and destinations over coffee and muesli. Tom managed to find some Captain Crunch somewhere… Back in our room we repacked and set off up the side of the valley looking for the elusive marmots (P actually did see one!) 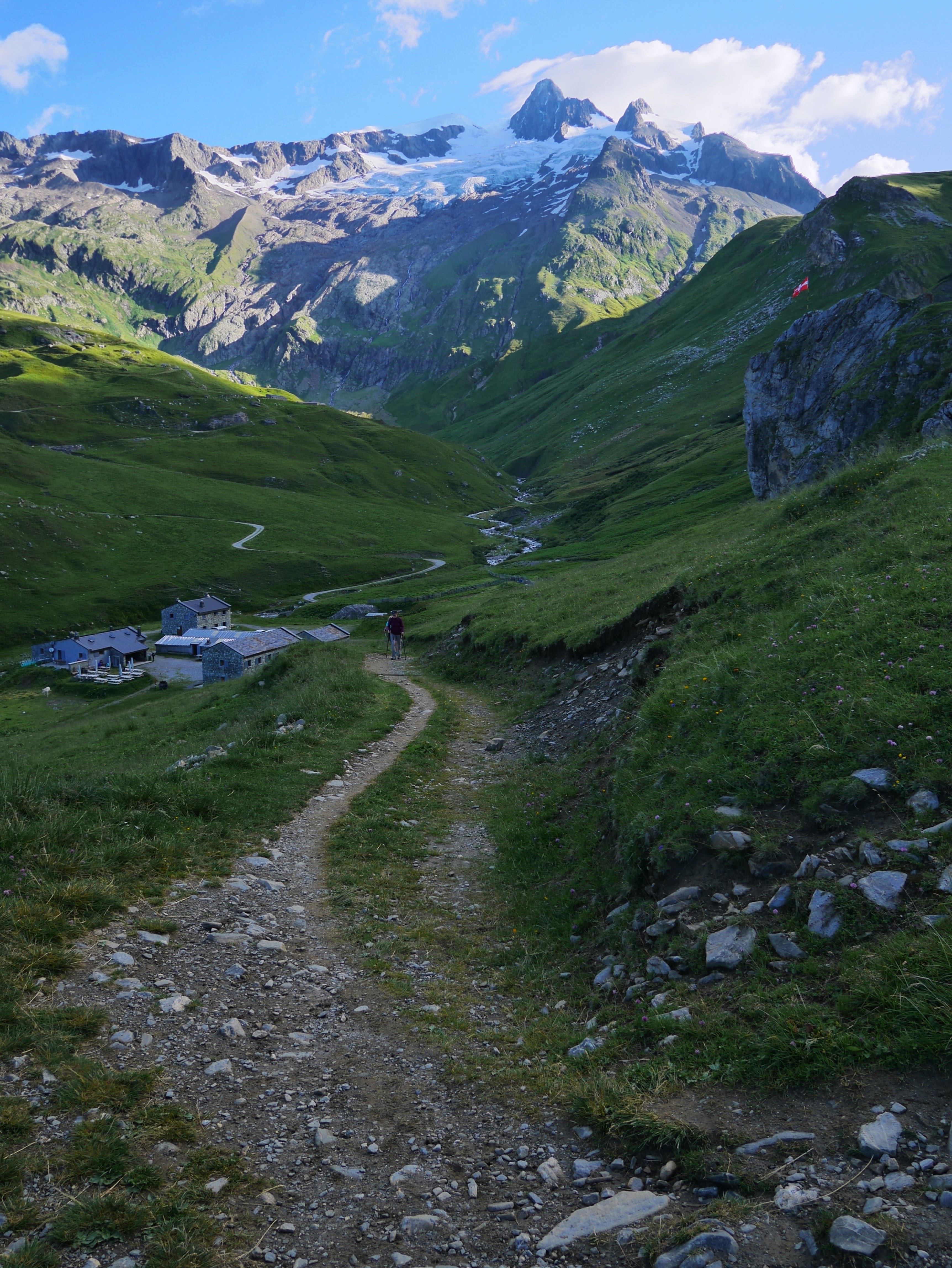 The knots of hikers gradually thinned out as we got higher, but the steep path was a hard way to start the day. 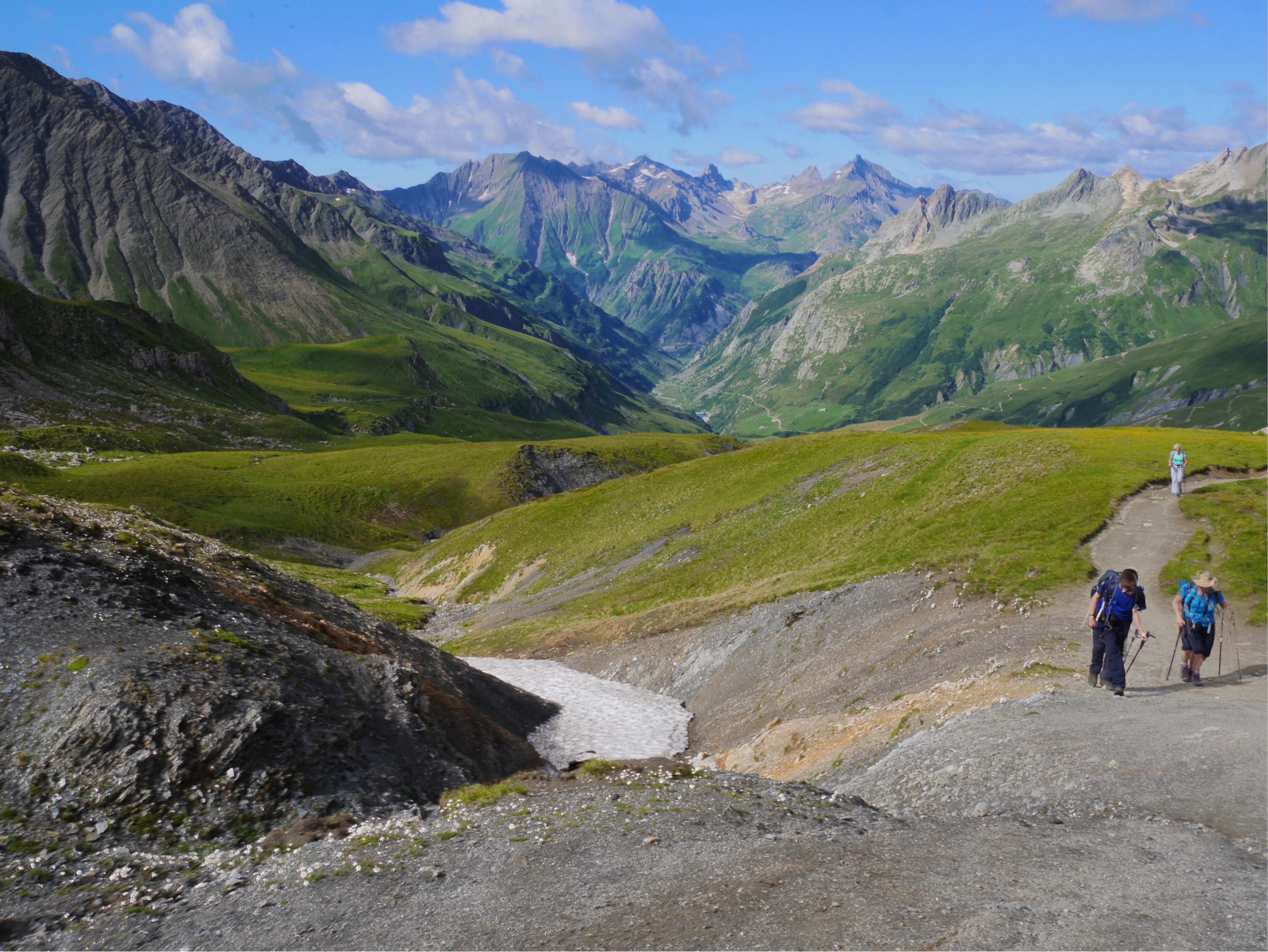 Soon the refuge was a grey cluster of dots in the valley far below and the slope began to round off towards the top of the ridge. And at the top – Col de la Seigne, the view opened up ahead of us. We could see the snowy dome of Mont Blanc gleaming in the sunshine surrounded by its attendant Aguilles with glaciers spilling down their flanks. 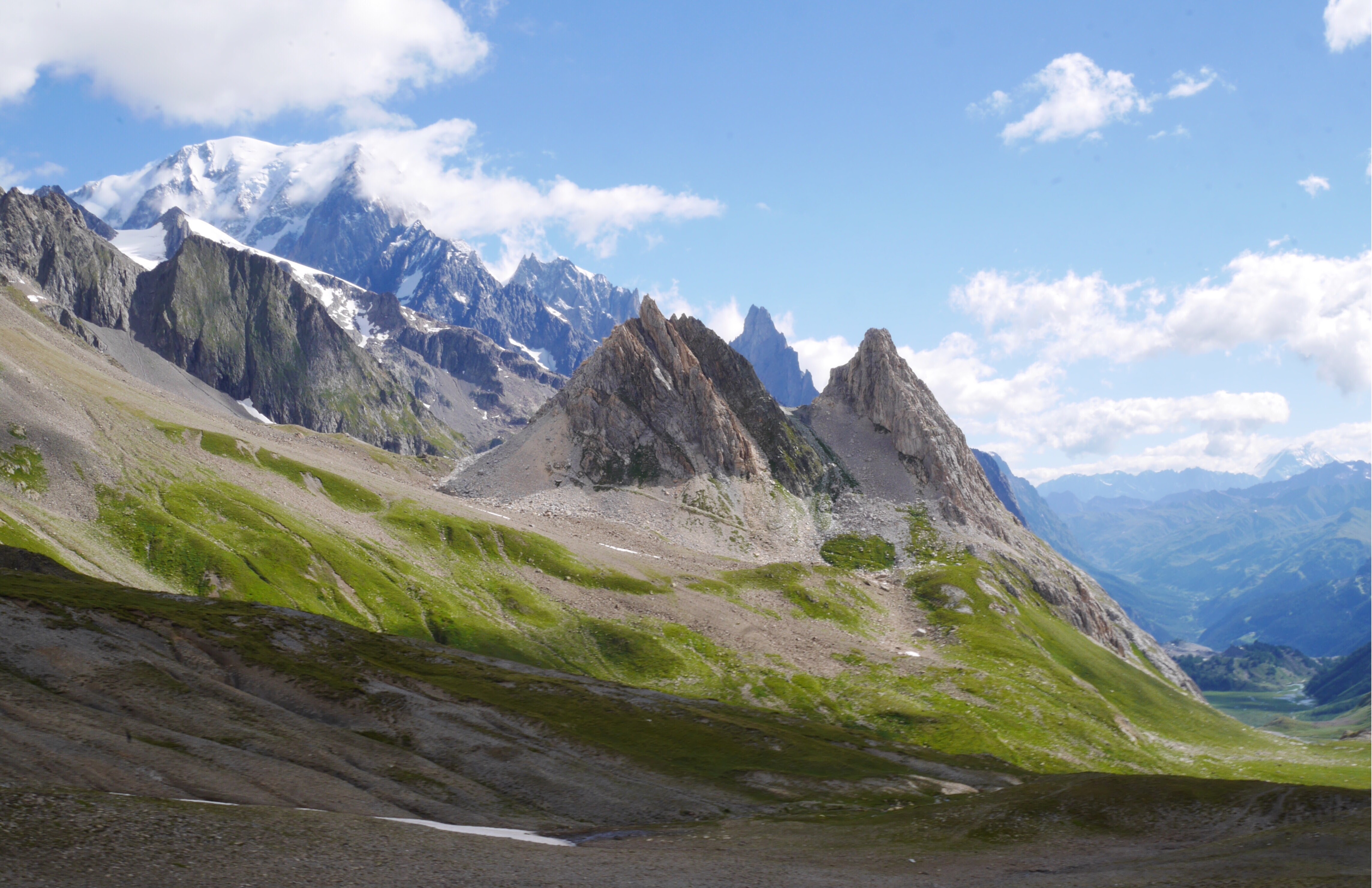 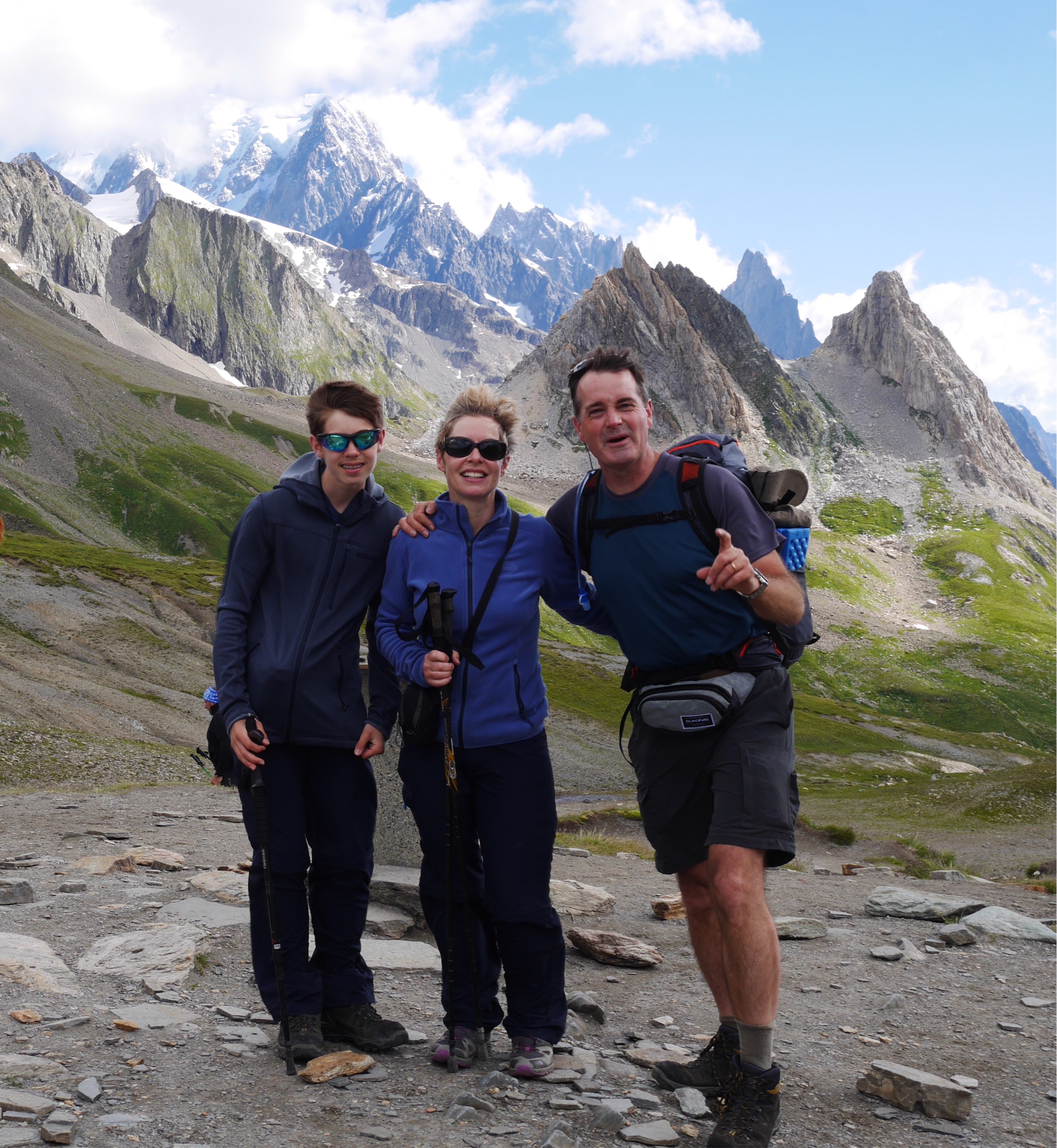 It’s a grand spot and we sat, wrapped up in hats and fleeces against the sharp wind, taking it all in. With the help of chocolate.

The ridge marked the border with Italy so we buongiorno’d those we met coming up the other way, but pretty much everyone says bonjour. Even the English speaking hikers greet each other in French which, says the guide, is the language of the TMB. 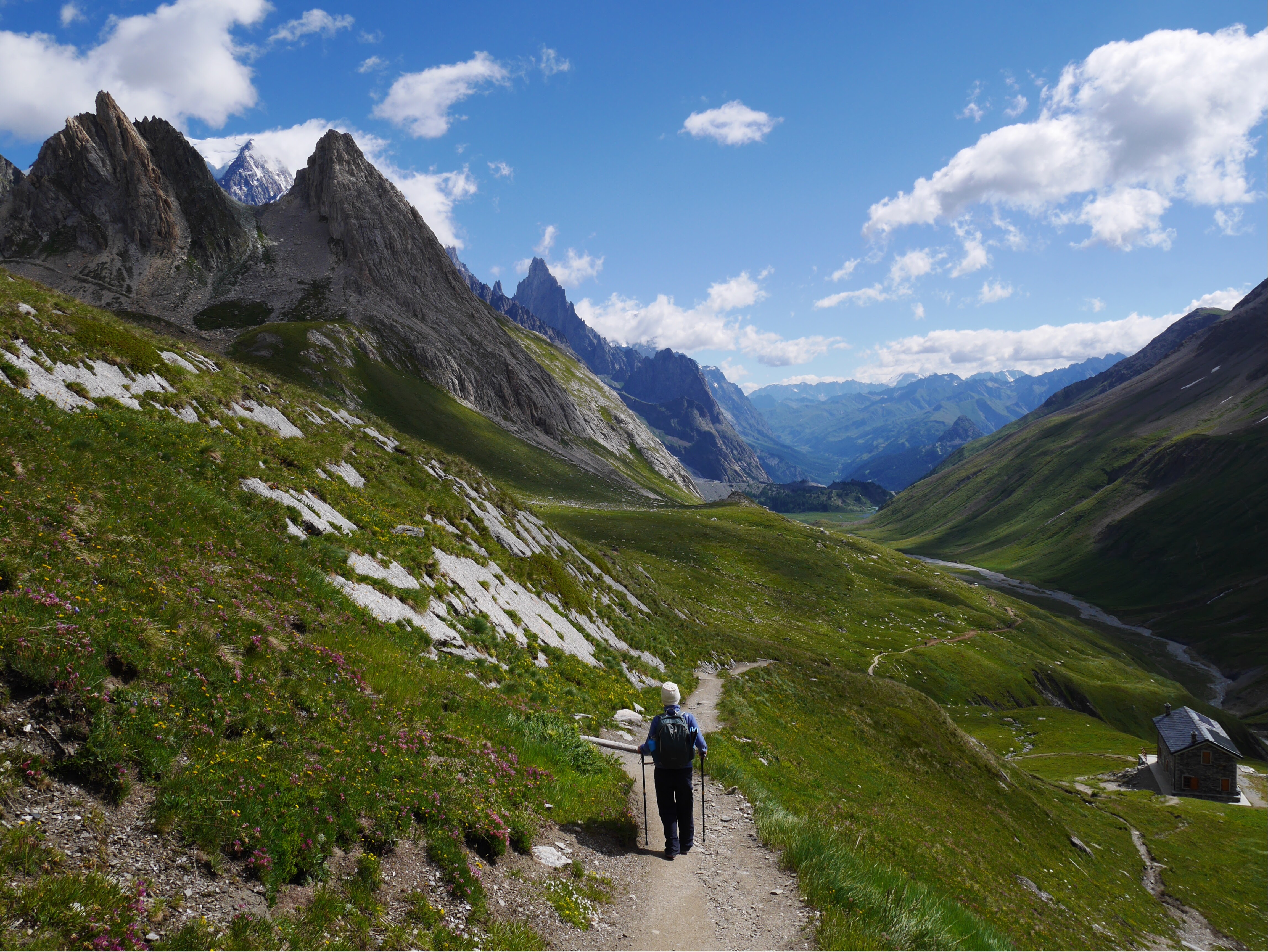 It was a lovely, easy stroll downhill in the sunshine to Rifugio Elisabetta, with those towering mountains shadowing us all the way. 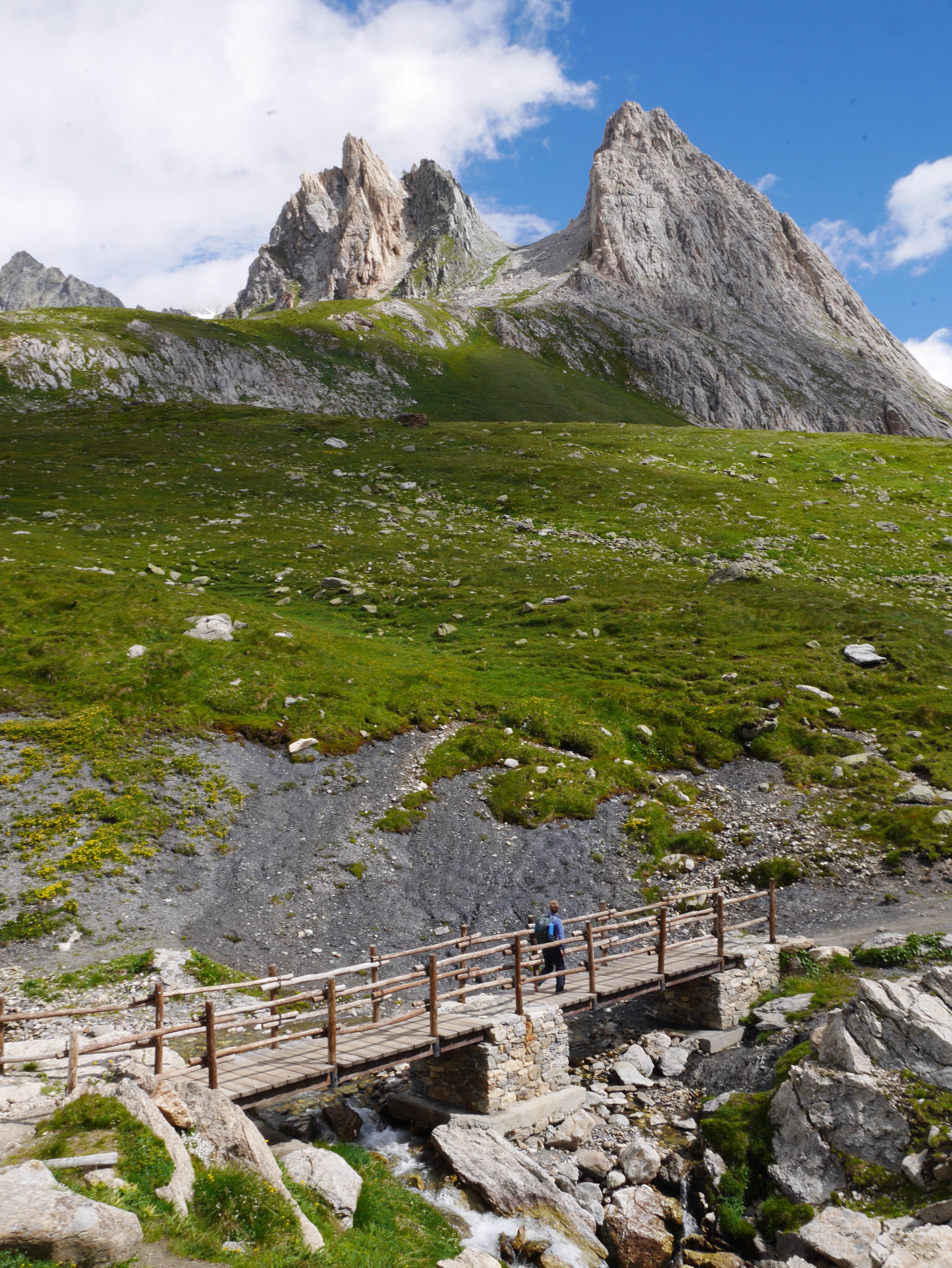 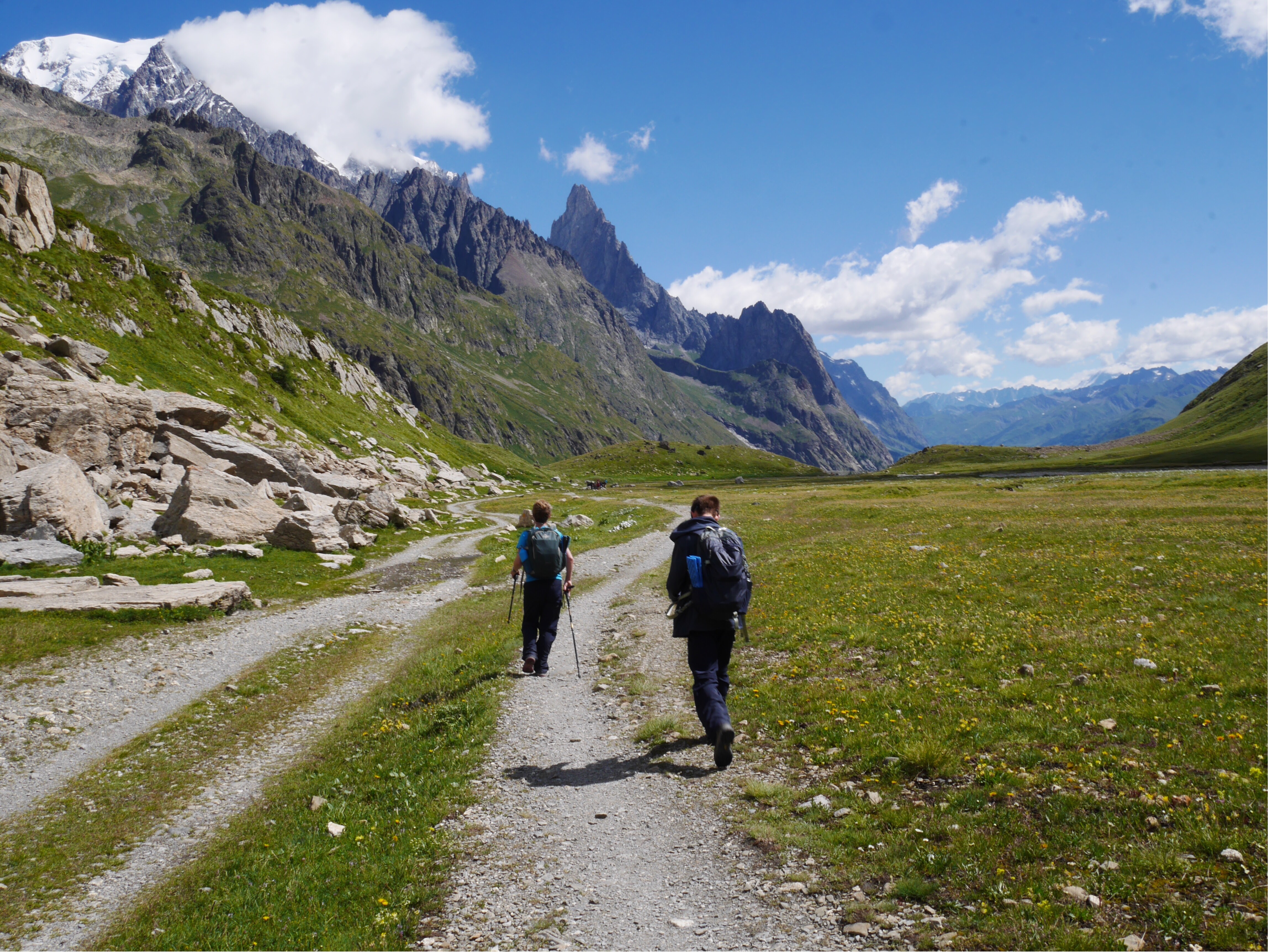 The Rifugio is perched on a high slope with the Colle del Estellette behind it. Two glaciers pouring meltwater provide a constant soundtrack. 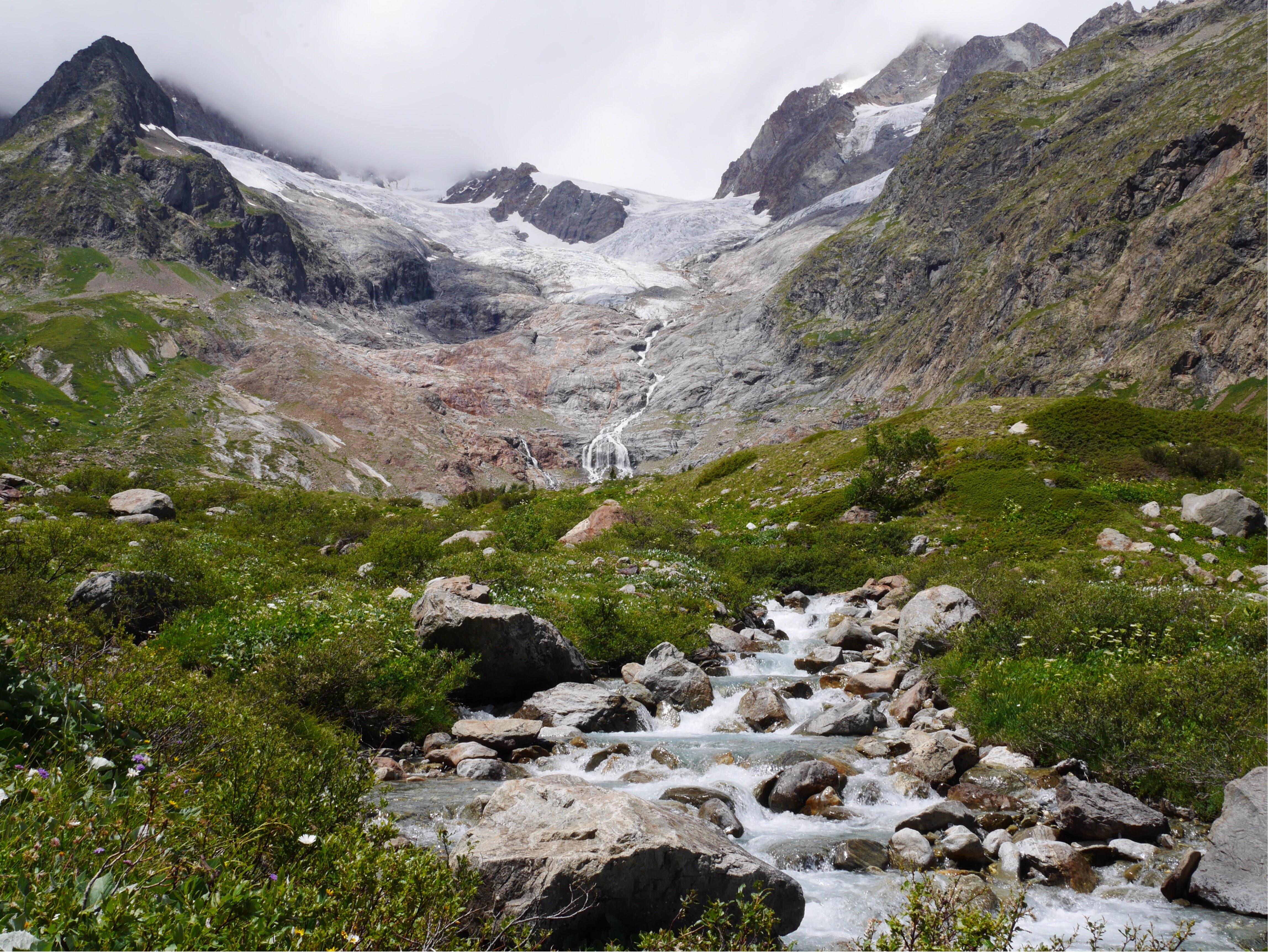 The Rifugio is a a wood and stone chalet with checked tablecloths and a menu in Italian. So we really are in Italy then. Pasta seemed appropriate. As did Tiramisu. Tom had hot chocolate which was basically a slab of Giardelli melted and poured into a cup. Having done two thirds of today’s walk by eleven thirty, we were happy to linger.

We could see the rest of the path on the valley floor below, straight as an arrow along a track built by the Italian army. Apparently these ridges have been fought over from the Romans onwards. On the way down we passed lumps of wartime concrete and rusting ironwork poking out from clumps of Cow Parsley. 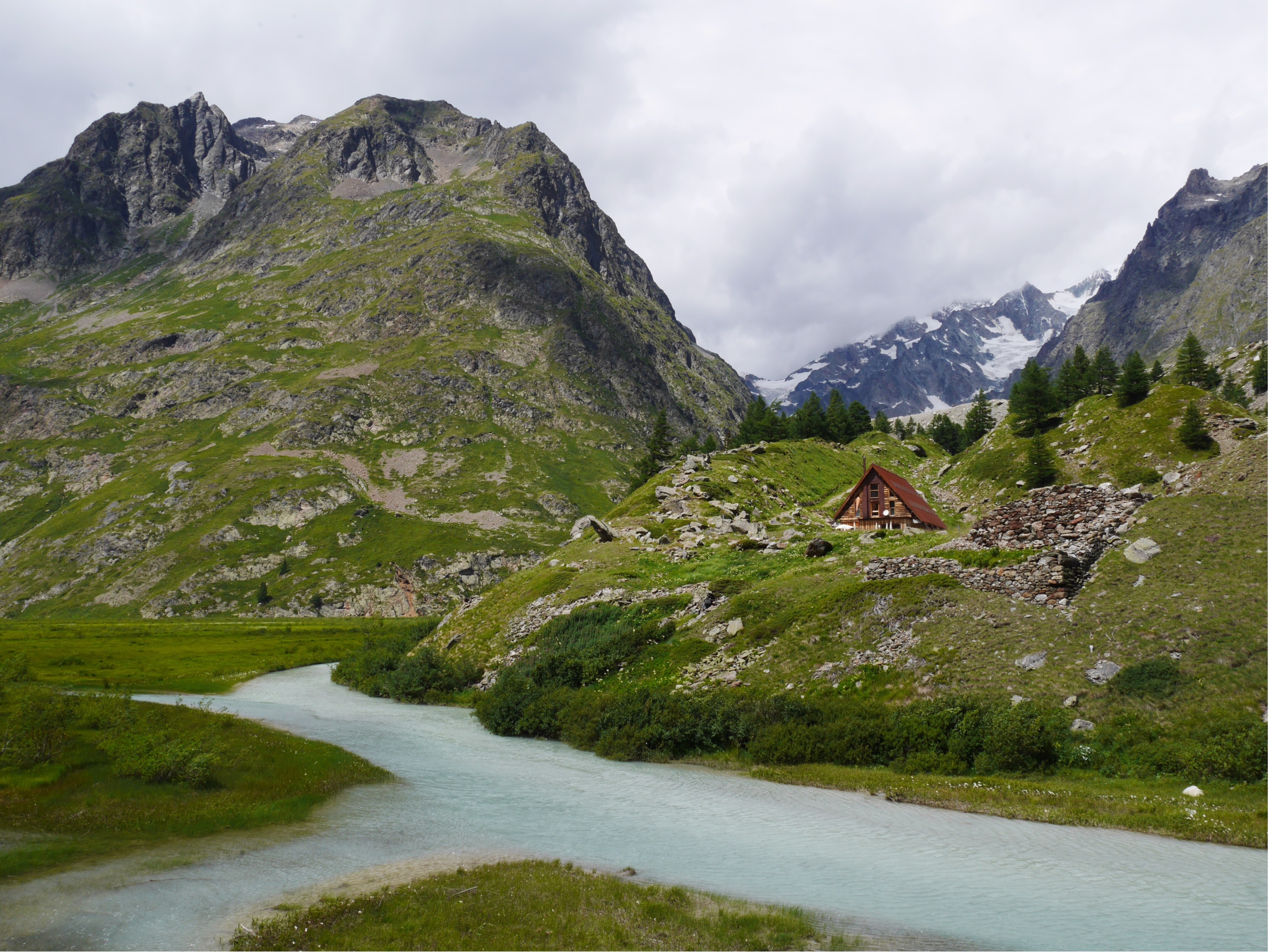 Beside the track the rivers have pooled into a series of small lakes and at the end of them, below a sharp ridge of glacial moraine sits the Cabin du Combal. It was busy with hikers passing through and stopping for drinks in the sunshine. Our English friends were there ahead of us and we all checked in for the night.

Trapped in the walls of glacial moraine are two small lakes and we hiked up to see them. The area has been ravaged by ice and is strewn with great boulders and piles of broken rock. The lakes are small, just ponds really, but the biggest has a grubby glacier toe sticking into it. The glacier was so covered with fallen rock that we didn’t notice the ice at the waterline at first. 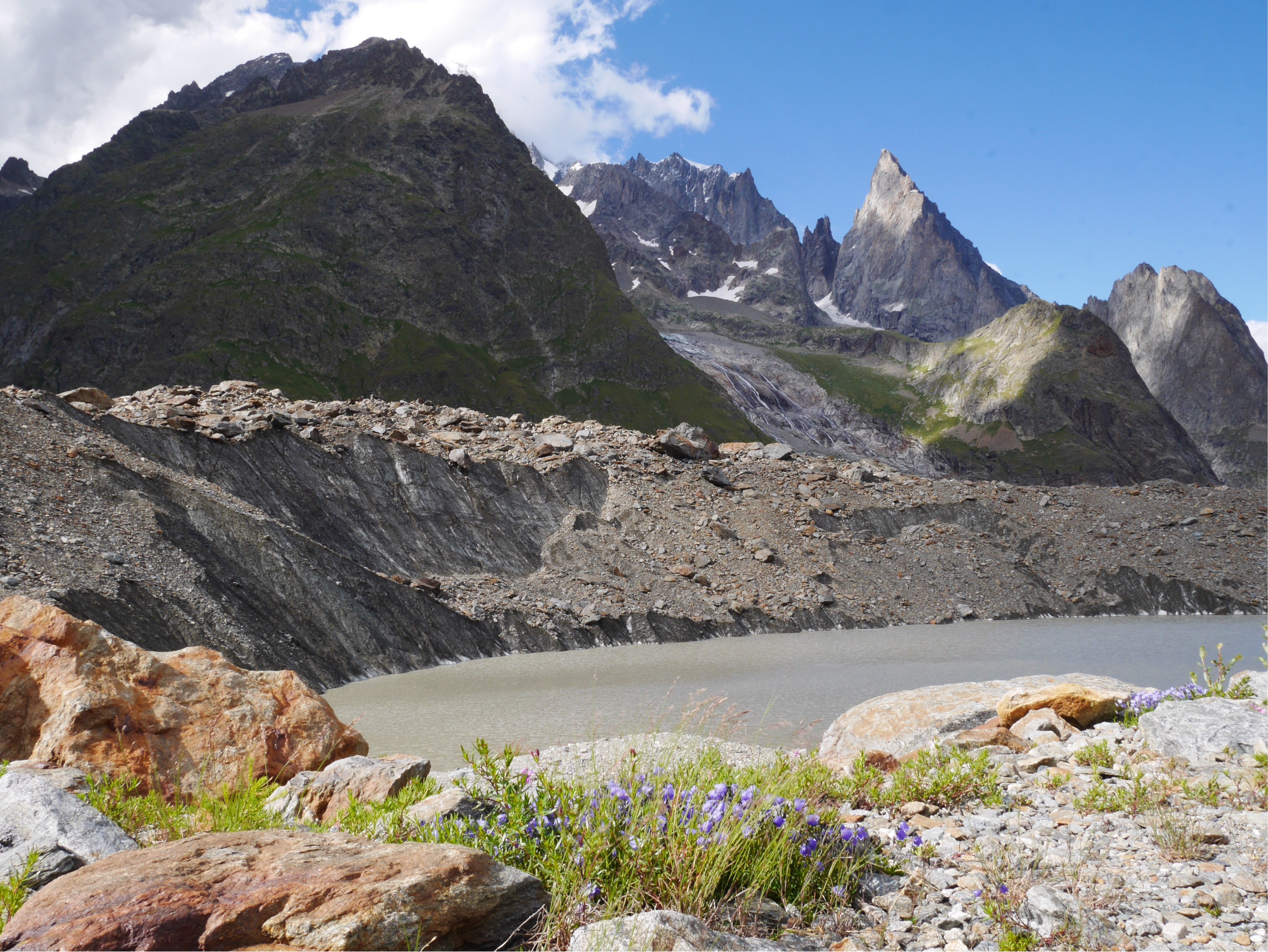 As we were exploring, a rushing wind suddenly blew in and the sky darkened so we hot-footed back to the Cabin. And all at once the sky cleared again so we sat outside and watched the afternoon turn to a blustery evening.

Dinner was part of the package and was plentiful and good. Pasta or a hearty bean and vegetable soup and then a rich beef stew with long blocks of fried polenta. Just as we could barely move, they brought pear and chocolate cake. Oh my word…

They turn the generator off at 9pm at the Cabin du Combale which more or less forces everyone to go to bed. From the outside the building looks fairly simple and rustic, with a steep-pitched tin roof and small windows. The rooms are simple but bright and clean and the floors are wood or stone-tiled. The fixtures are modern chrome and porcelain and it all combines to create a really lovely, peaceful place. We sat up in the dark watching a movie on my iPad and then slept, long and deep. 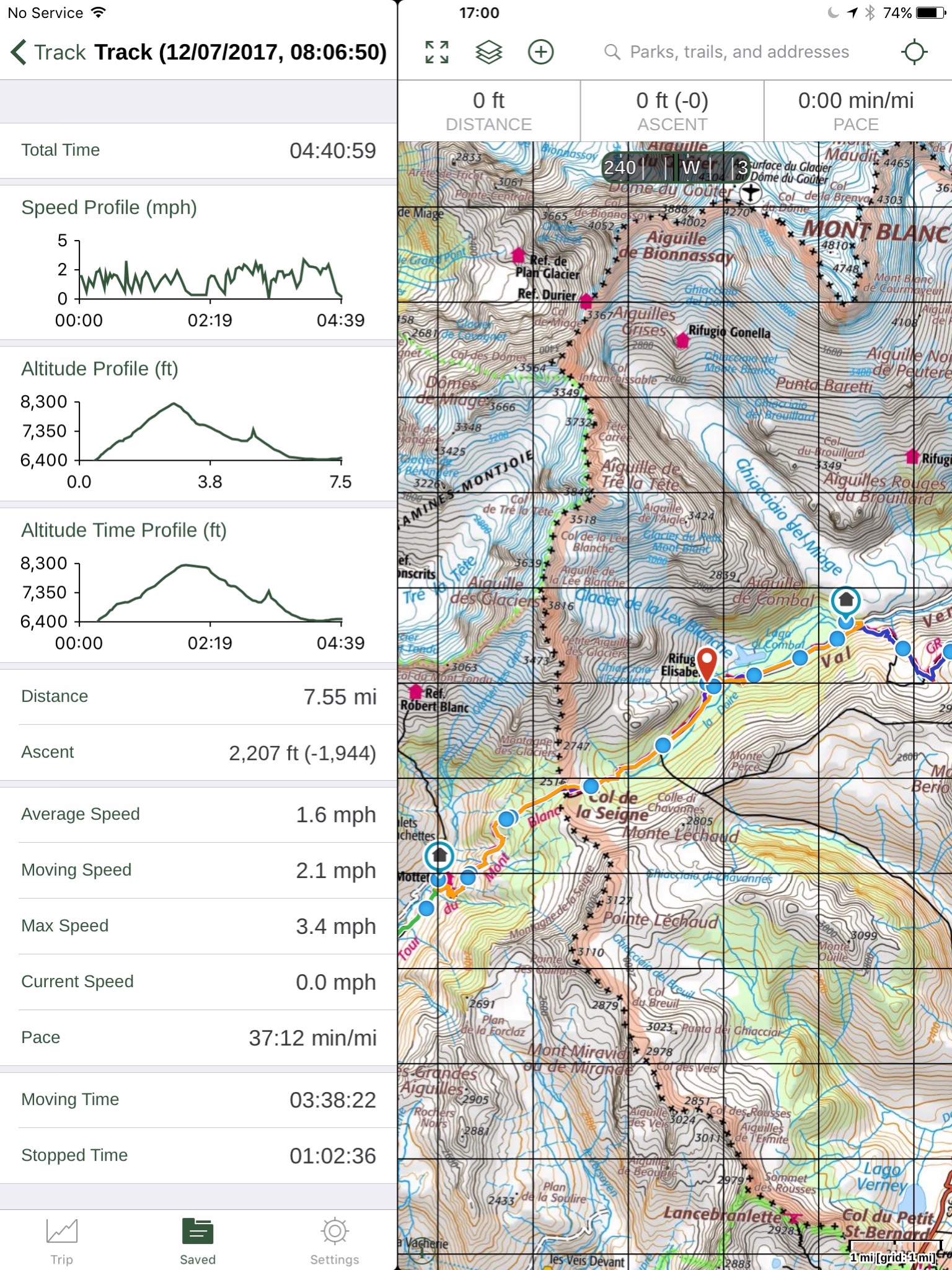