By Richard ListerJuly 14, 2017
They do a good breakfast at the Hotel Chemenaz. So good that we each had at least three. But after a day off lazing about in the sunshine and avoiding the spectacular thunderstorm yesterday it was time to go around a bit more of Mont Blanc. And today’s walk was to be further and higher than day one… So we set off early into a damp morning, everything freshly washed by last night’s rain. Our packs are considerably heavier today. We are staying in mountain huts for the next two nights which means we have three days of hiking snacks and fresh clothes and wash kits and all the other stuff we usually leave in our big bag that gets shipped about from hotel to hotel for us. We won’t see it until we get to Courmeyeur, and THAT means the knees and hips are protesting a bit this morning at the sudden extra weight. 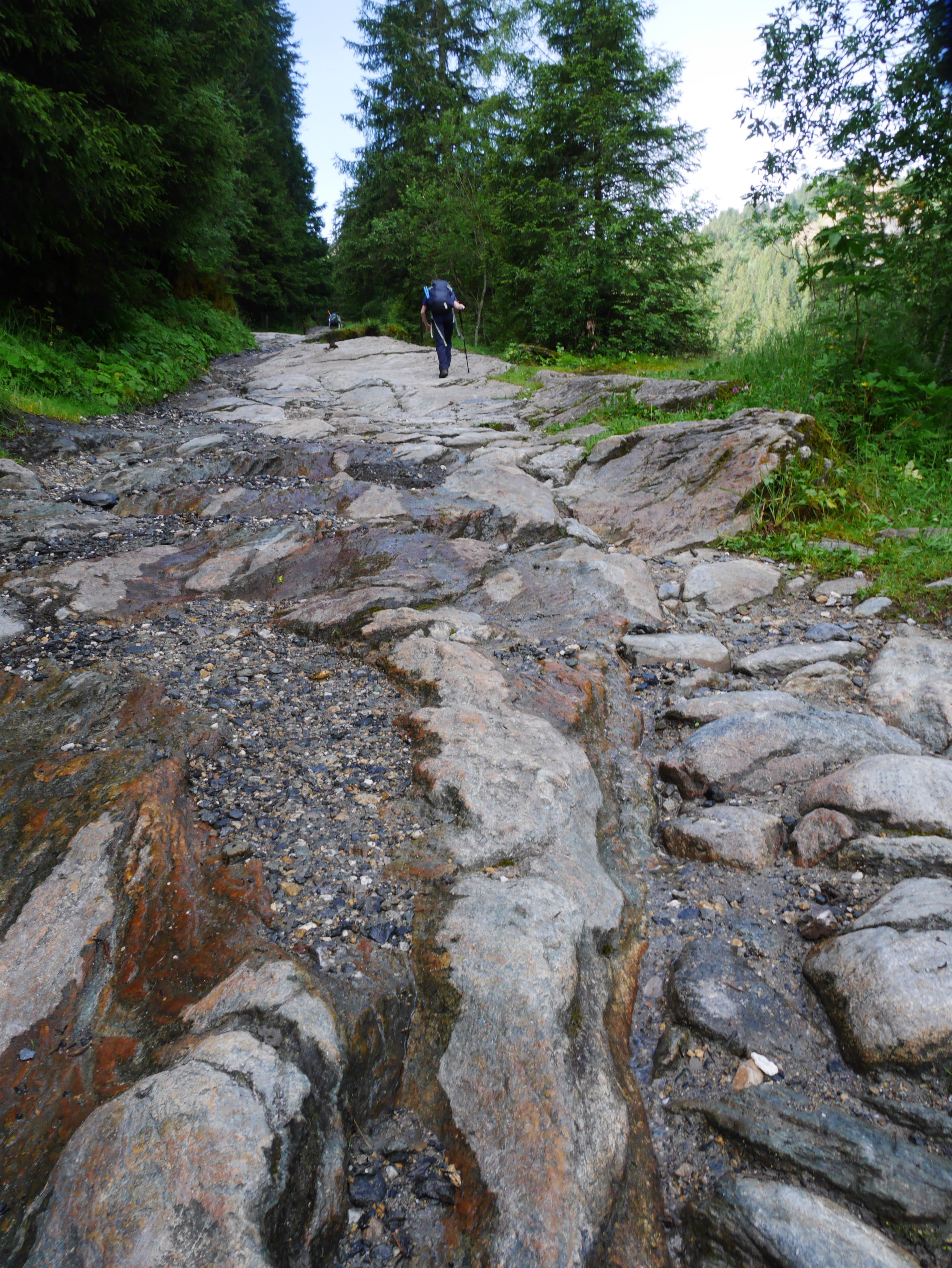 After half an hour walking along the river, the trail rose sharply along a track laid by the Romans. They weren’t ones for going around things, the Romans. So this track goes steeply up the hill with no allowance for fifty-something legs whatsoever. It was a tough way to start the day, but eventually it evened out a bit and took us over an incredible Roman bridge, spanning a deep gorge with water hurling itself through wave-worn rock in the bottom. 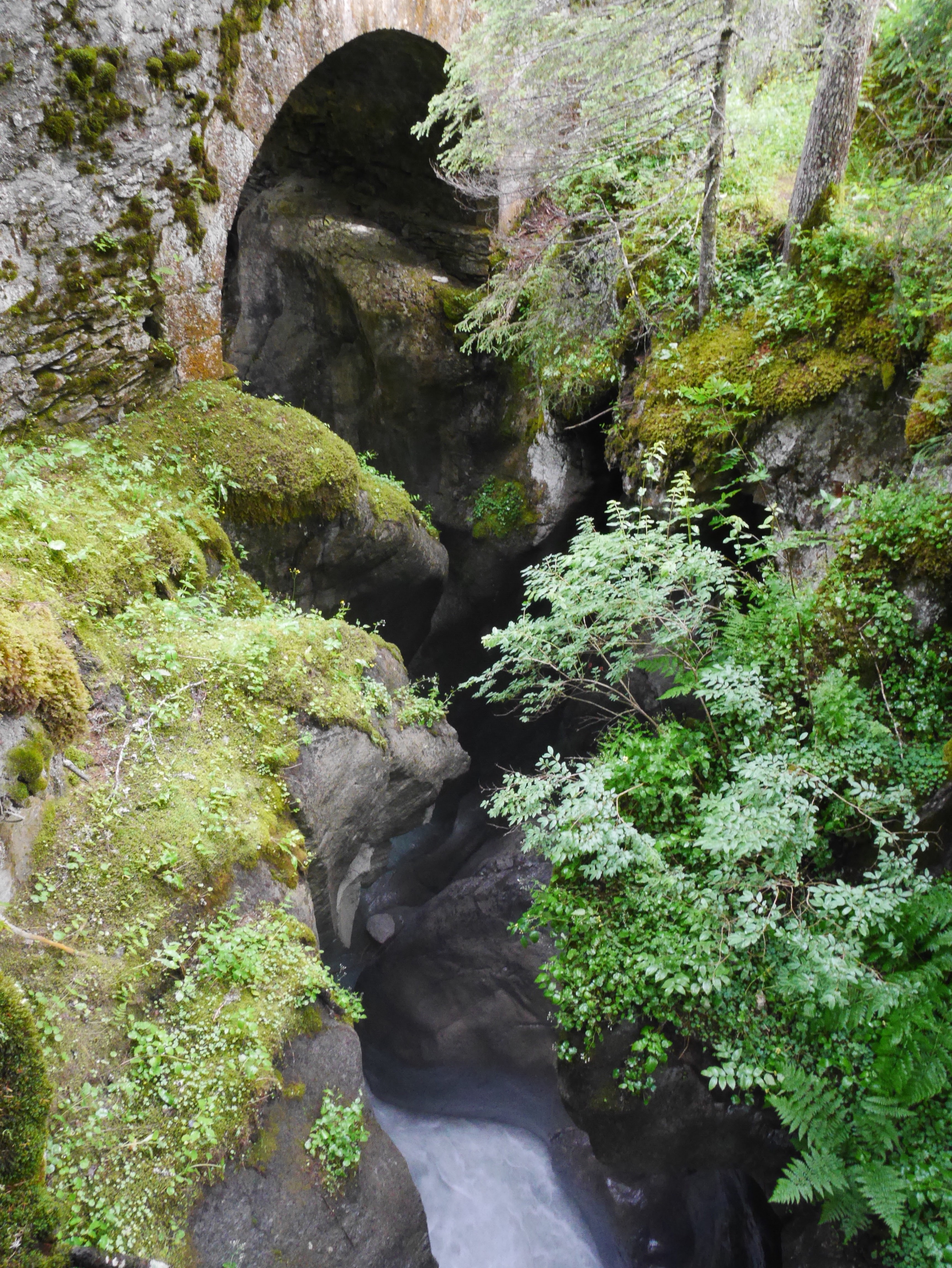 We were heading for the Col du Bonhomme and the signs suggested it was four hours away. Uphill. The next sign we saw said that the Refuge de Mottets – tonight’s destination – was seven hours walk away… That was really more information than I needed as we slogged our way onwards and upwards. But turning a corner we found ourselves walking into a wide green bowl of a valley with snaggly mountains all around. 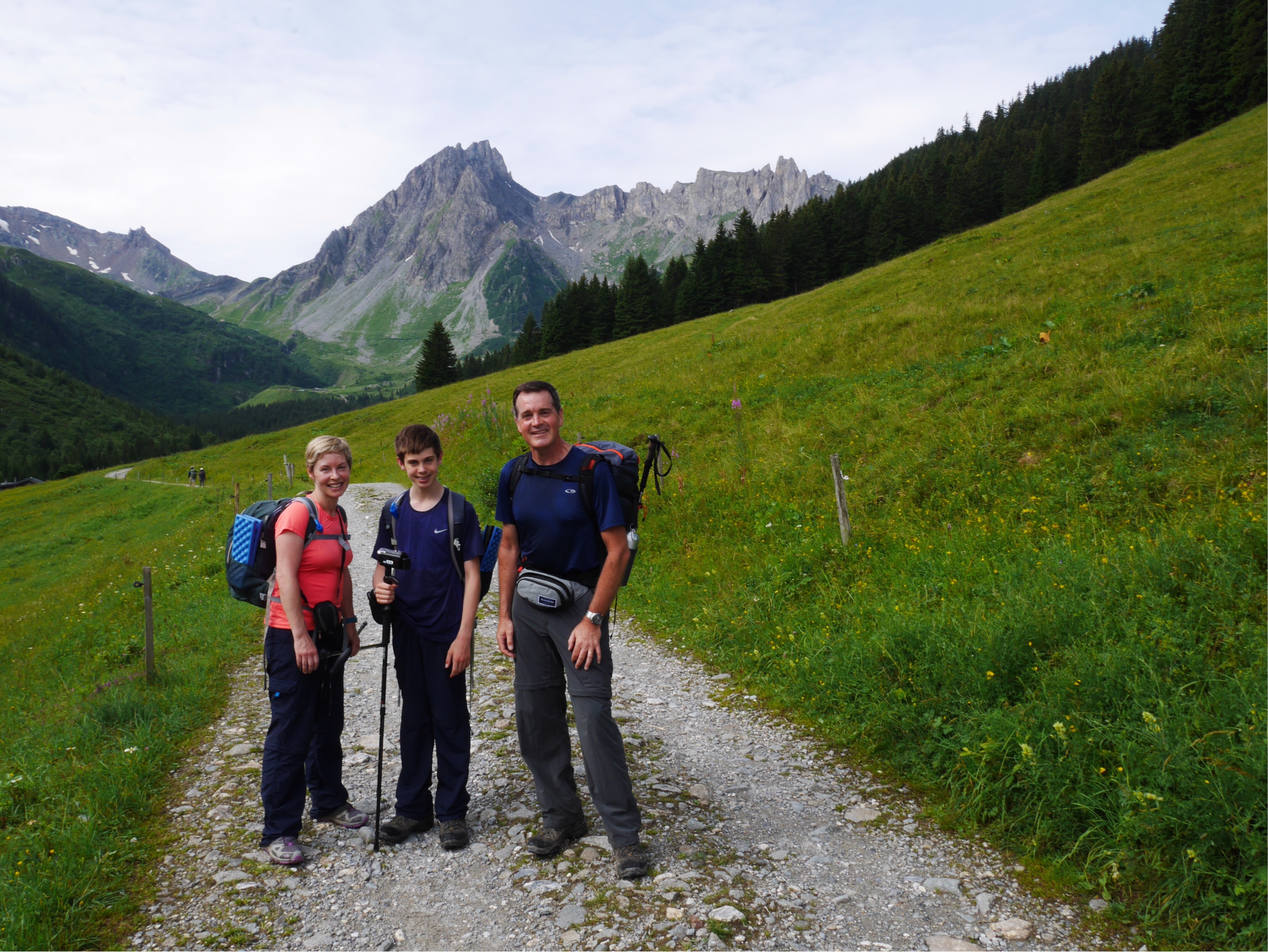 These are the Beaufort Alps and our majestic companions for this part of the walk. Glossy, chestnut-coloured cows tonkled either side of us and the path went up. And up. 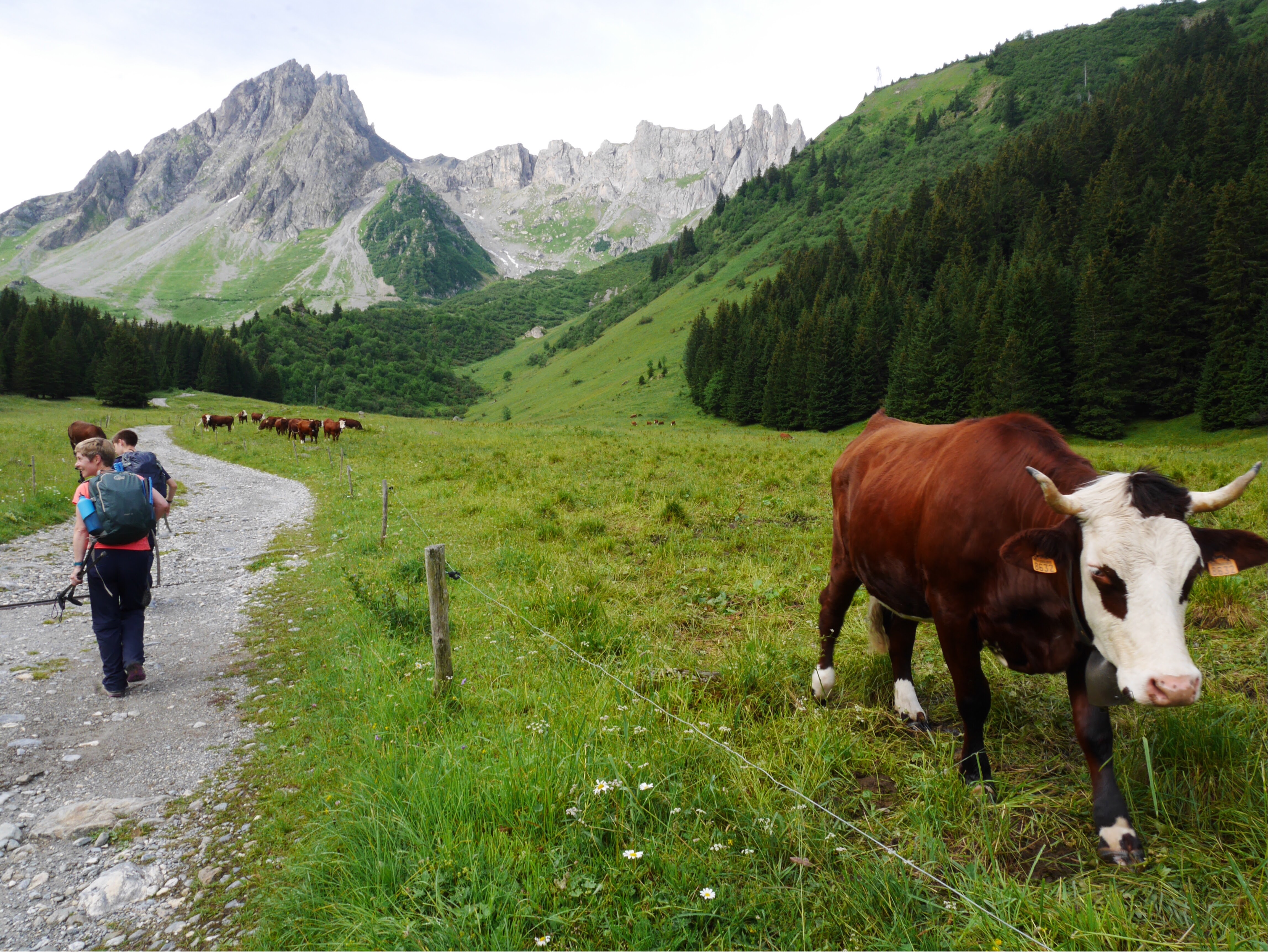 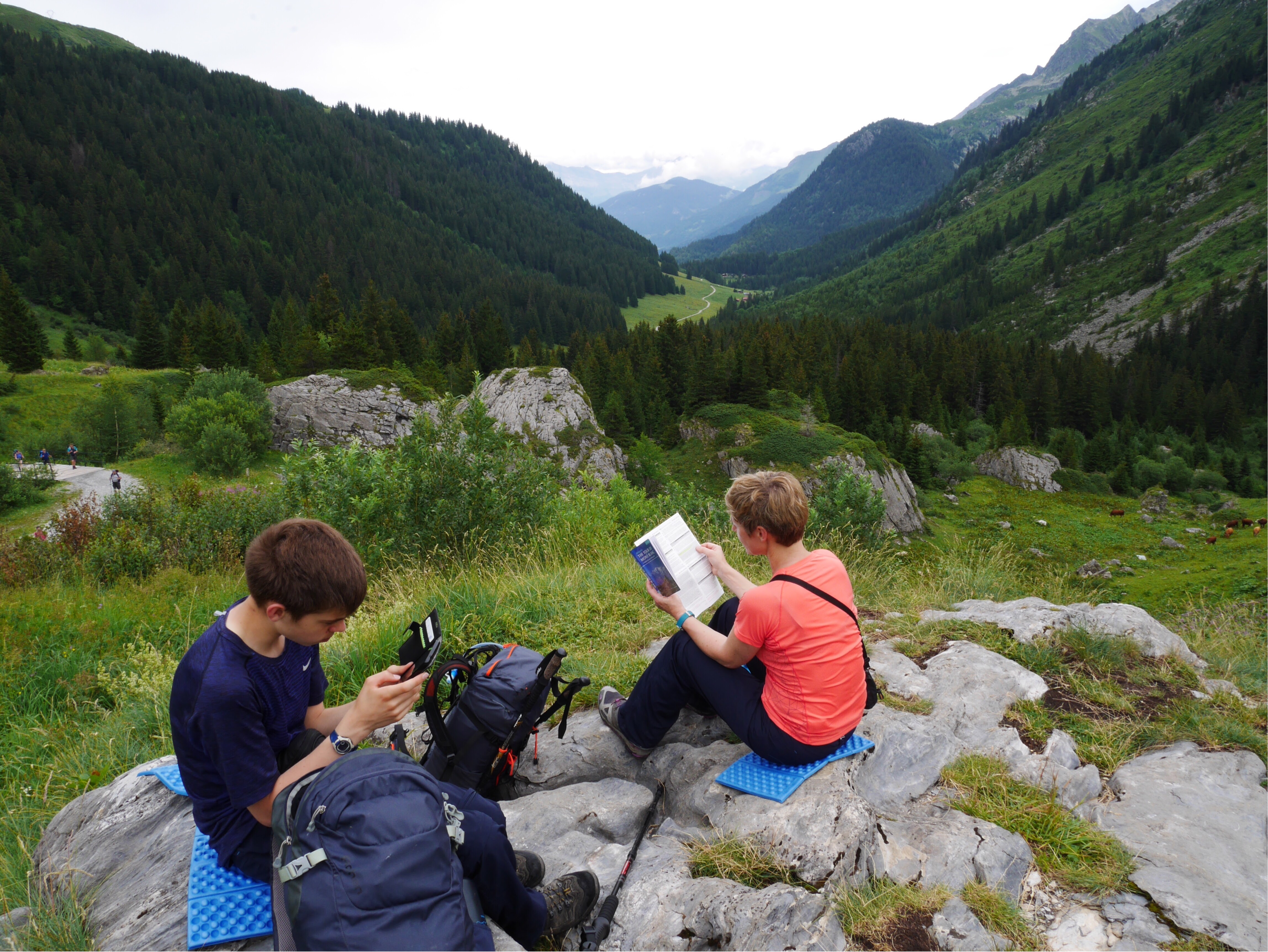 The path narrowed and got gaspingly steep. We were joined by mountain bikers walking up too with their bikes slung over their shoulders. There was no part of this path that you could cycle up so they must have really, really wanted to do whatever the downhill bit is. At the top of the steep path we came to a hanging valley with various streams gurgling down it. We followed one before taking the inevitable zigzag path up the side of the valley in a chill wind. It was a slog to the top but the view back over green mountains lifted our spirits. From there the path skirted the ridge, and after a morning of steep climbing it felt almost level. 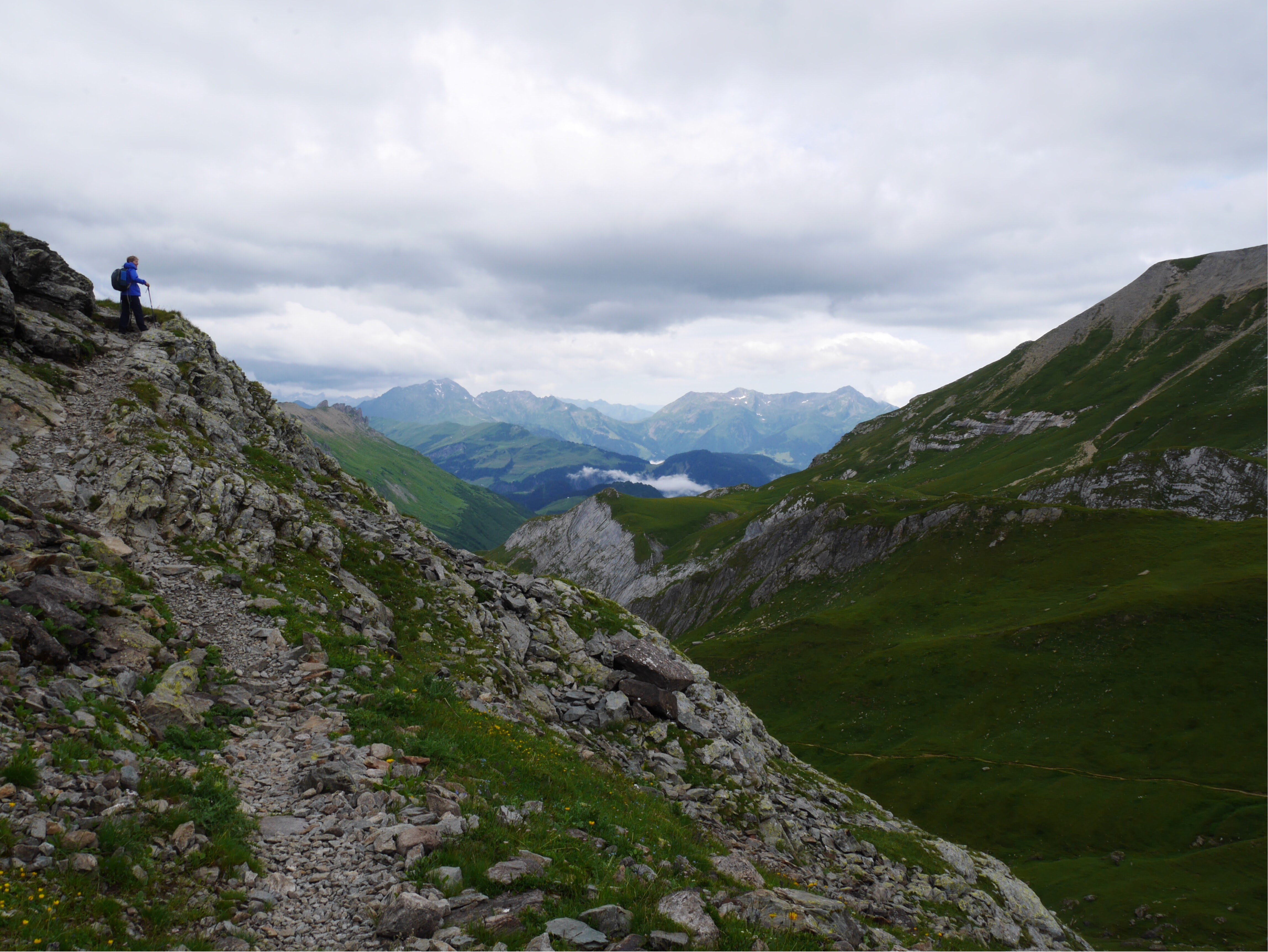 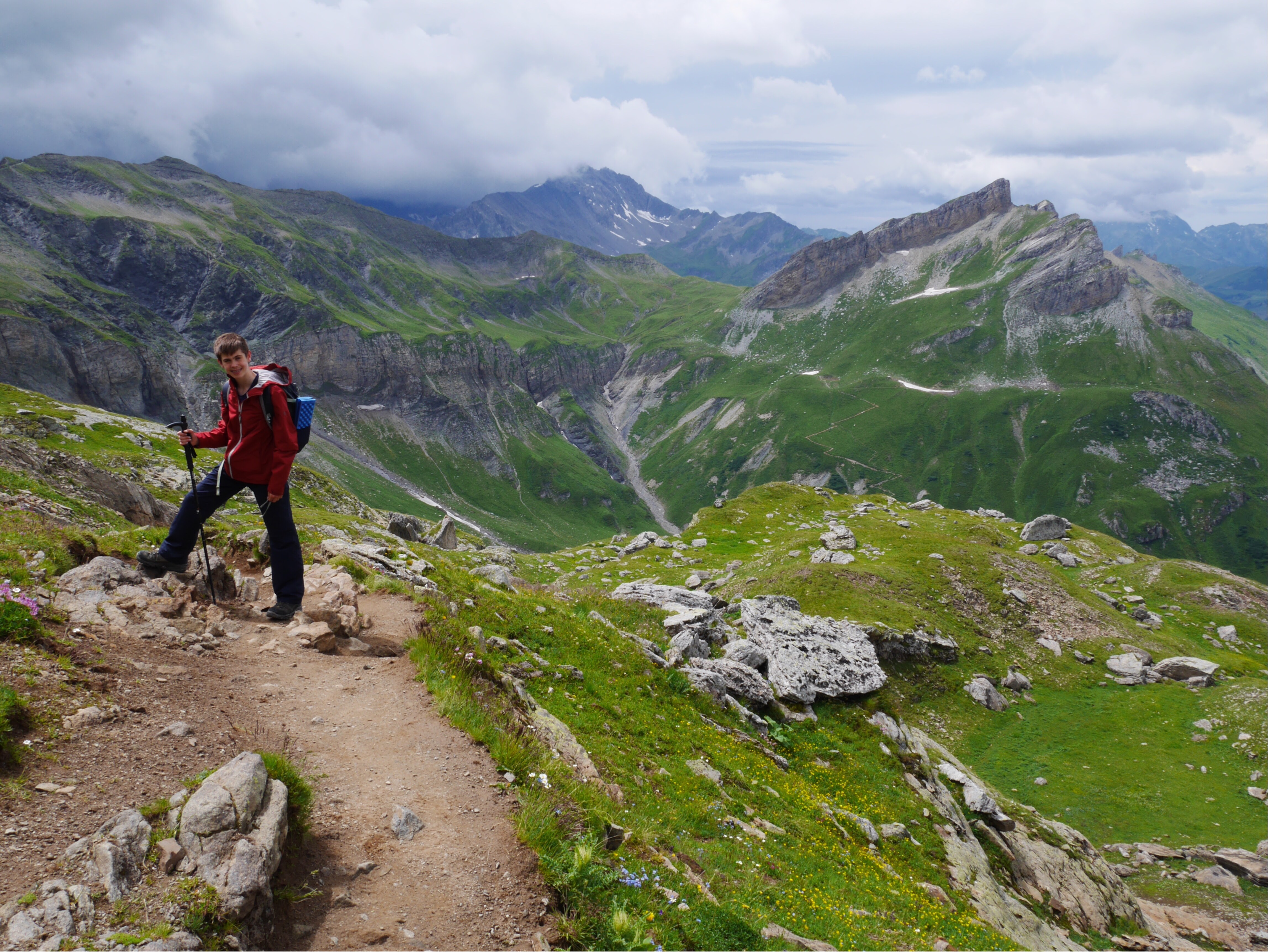 Mist blew in as we reached the Refuge Bonhomme. It was full of the cheery clatter of plates and people. We had soup and vin chaud and big pieces of cake. Marvellous. 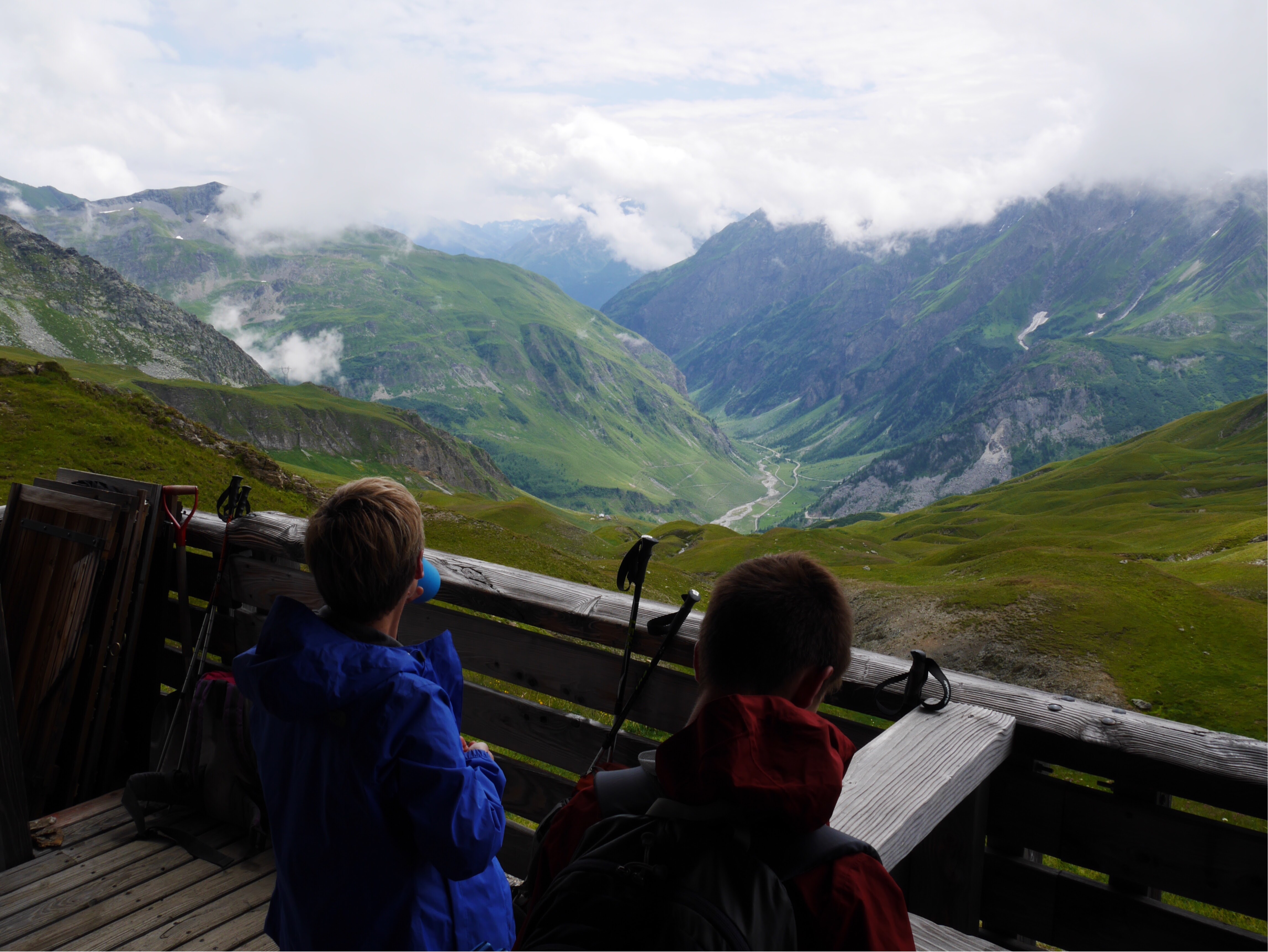 The cloud had blown off again when we emerged and we could see right down the valley below towards Les Chapieux. But we weren’t going there, we were going further up and over the snowy Col des Fours. The track started off wide and smooth and slowly became rutted and full of slow-flowing water, before it vanished under swathes of grubby snow. 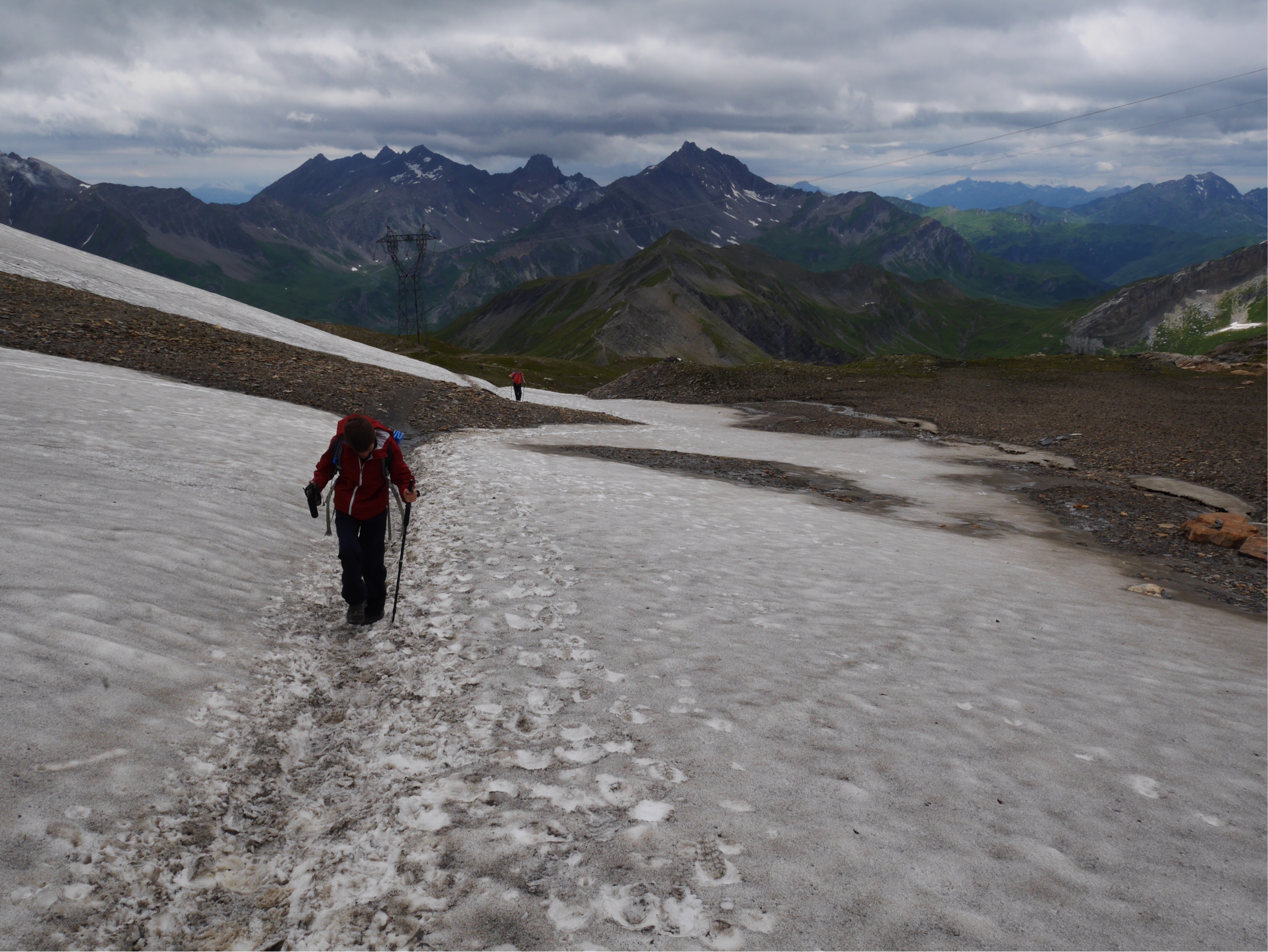 The wind whipped over the top of the ridge but it was exhilarating at the top, surrounded by peaks and snow. 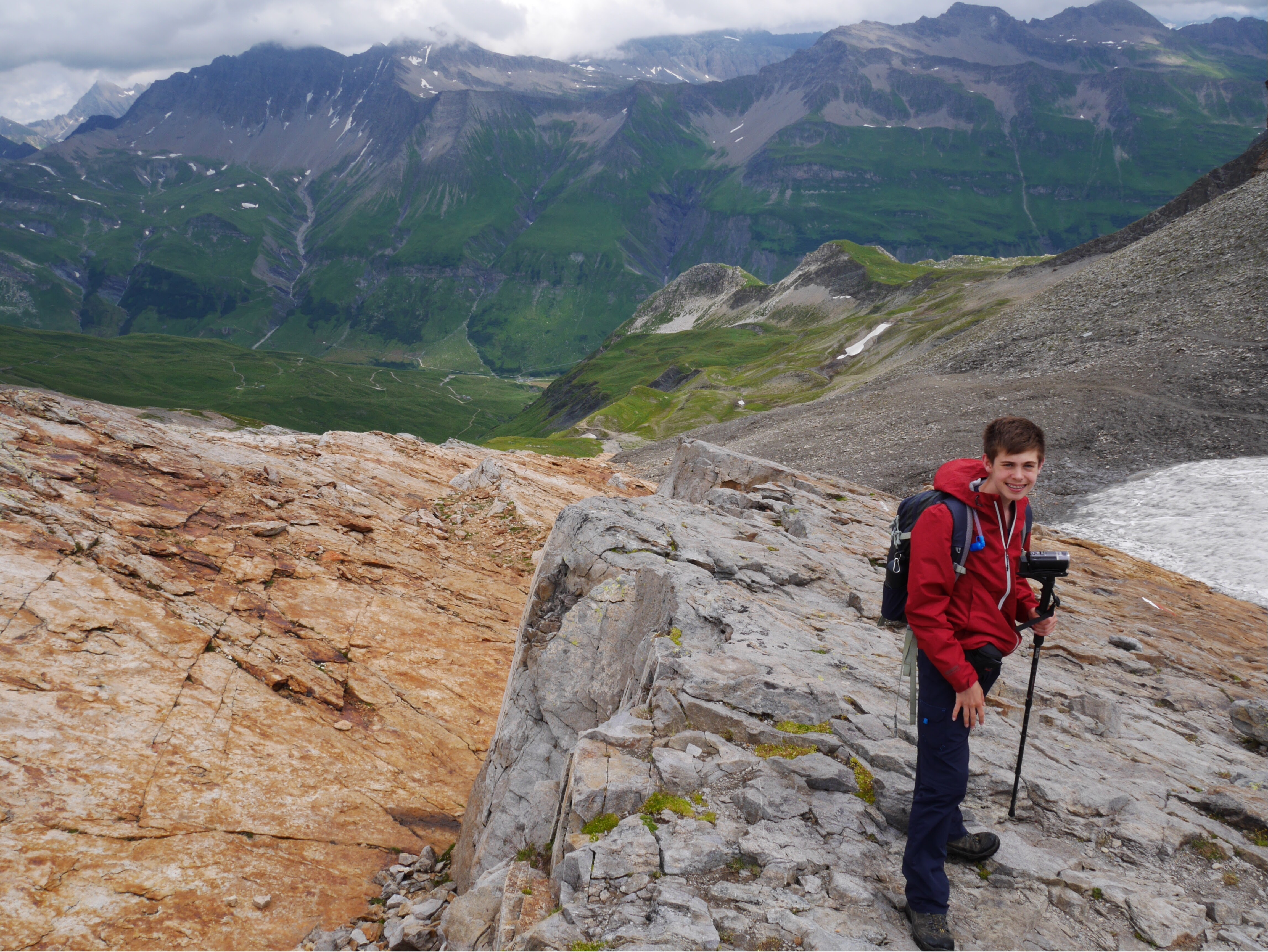 The route took us down steeply into the next valley which was dense with wildflowers, orange, purple, blue and yellow. Tom kept stopping to take pictures of new ones that he hadn’t seen before. 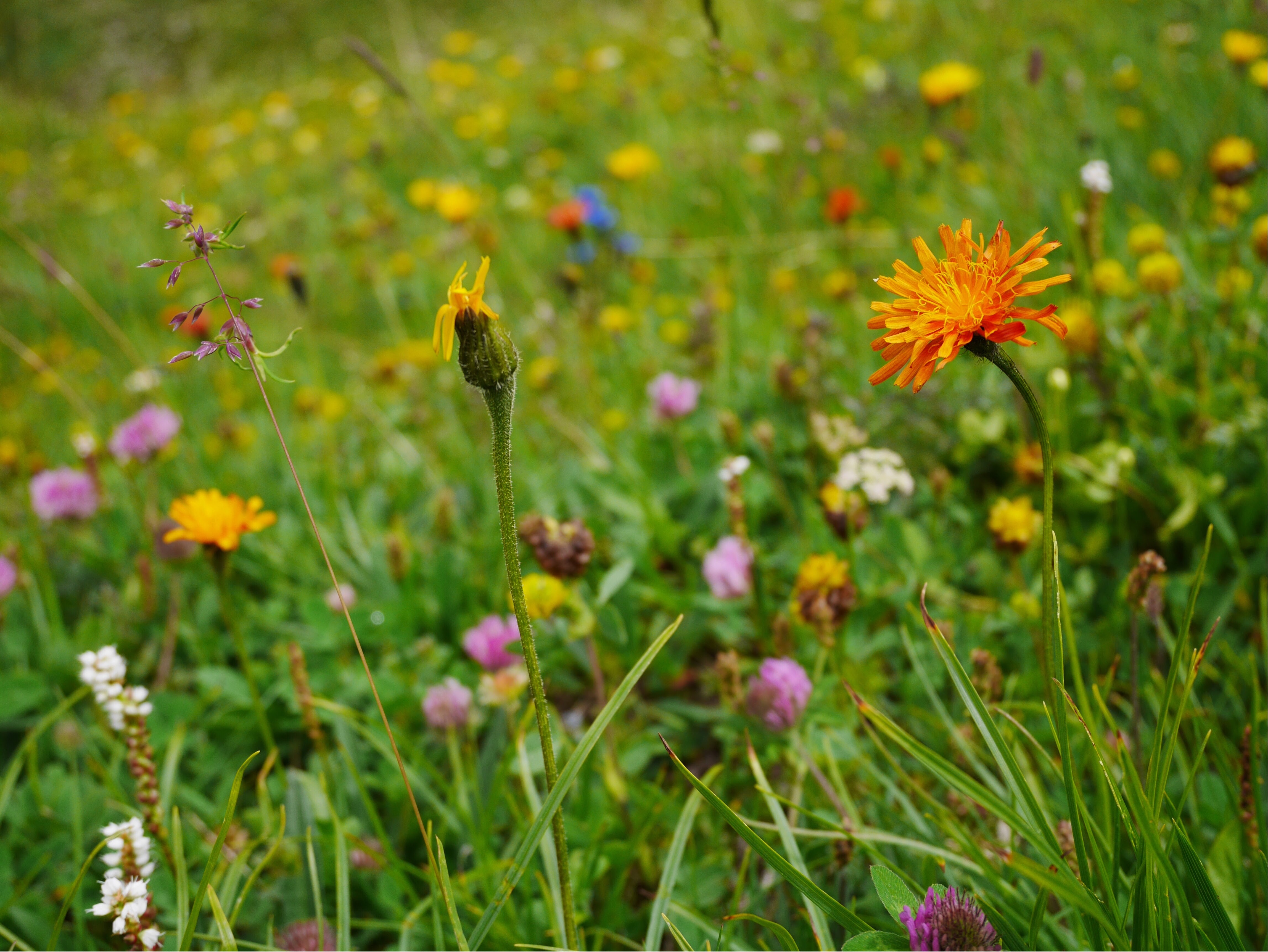 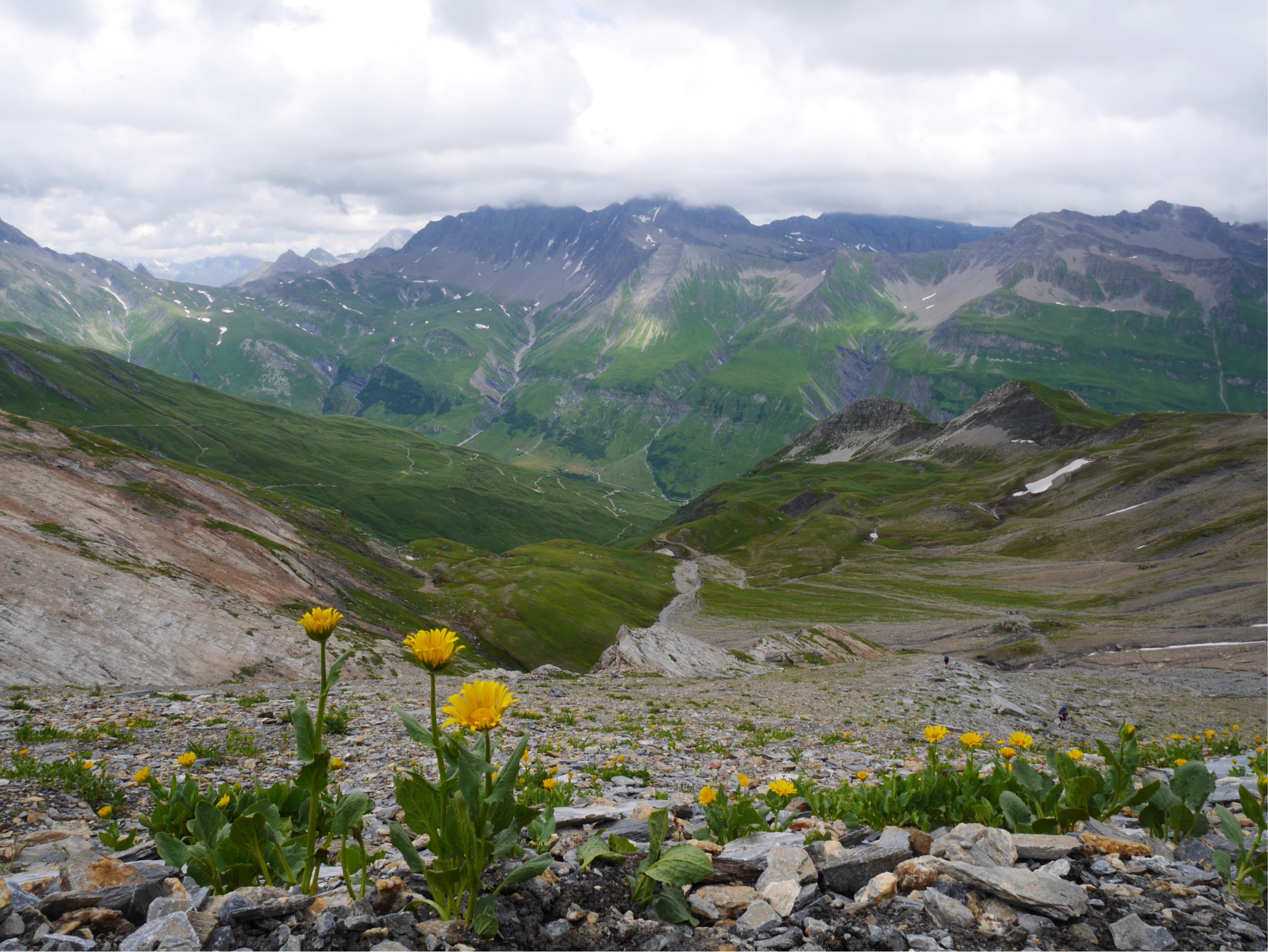 The track was peaceful in the lee of the wind. Every so often a bird would fly shrieking from the foliage. We crossed streams and waterfalls and some long abandoned farmsteads before reaching the valley bottom. 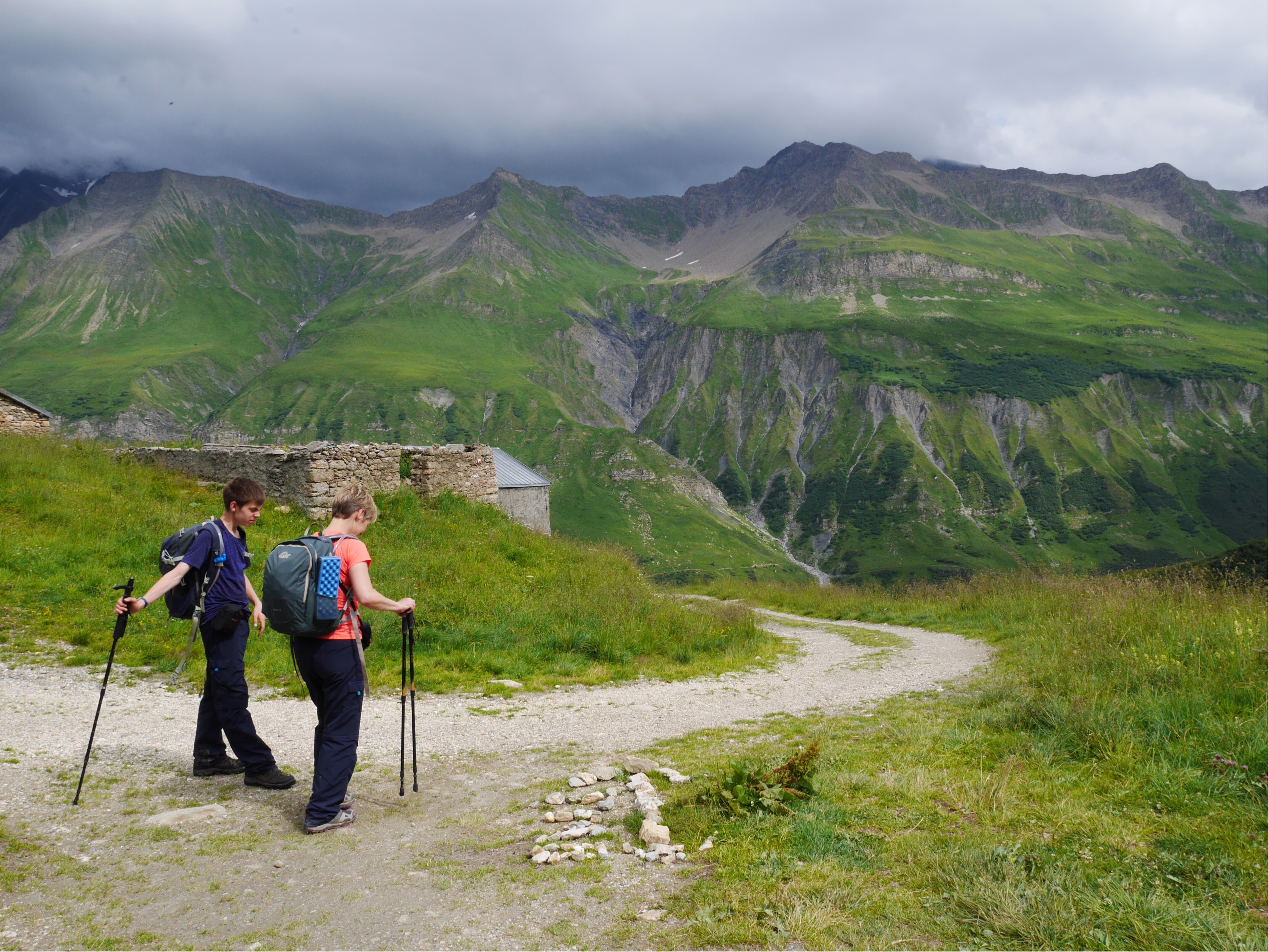 The Refuge de Mottets is an old dairy farm at the head of the valley and we sat outside with drinks watching the sun go down. It was another big day: almost 22k and 5250 feet climbed. Hard going but with so much to see. 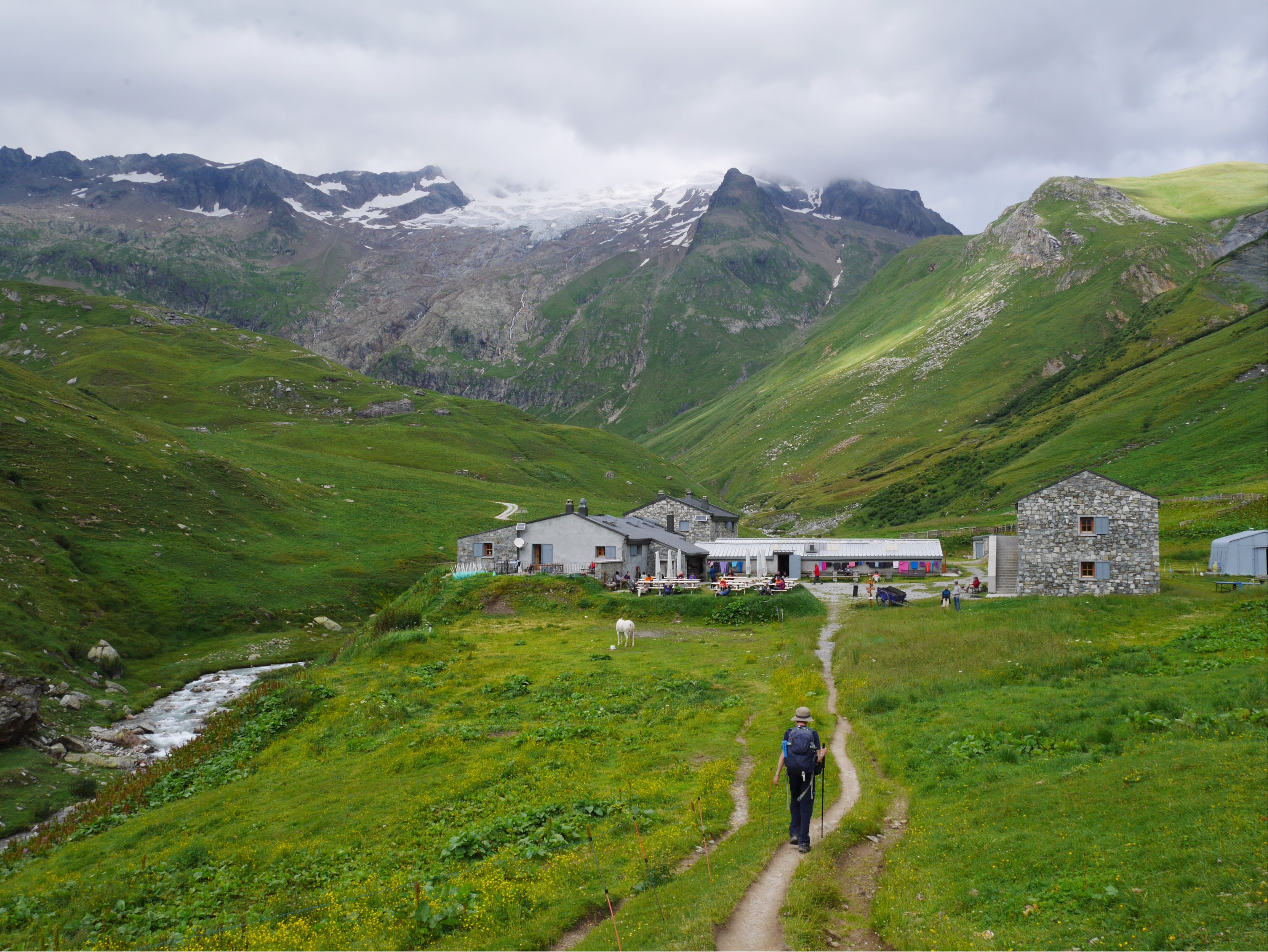 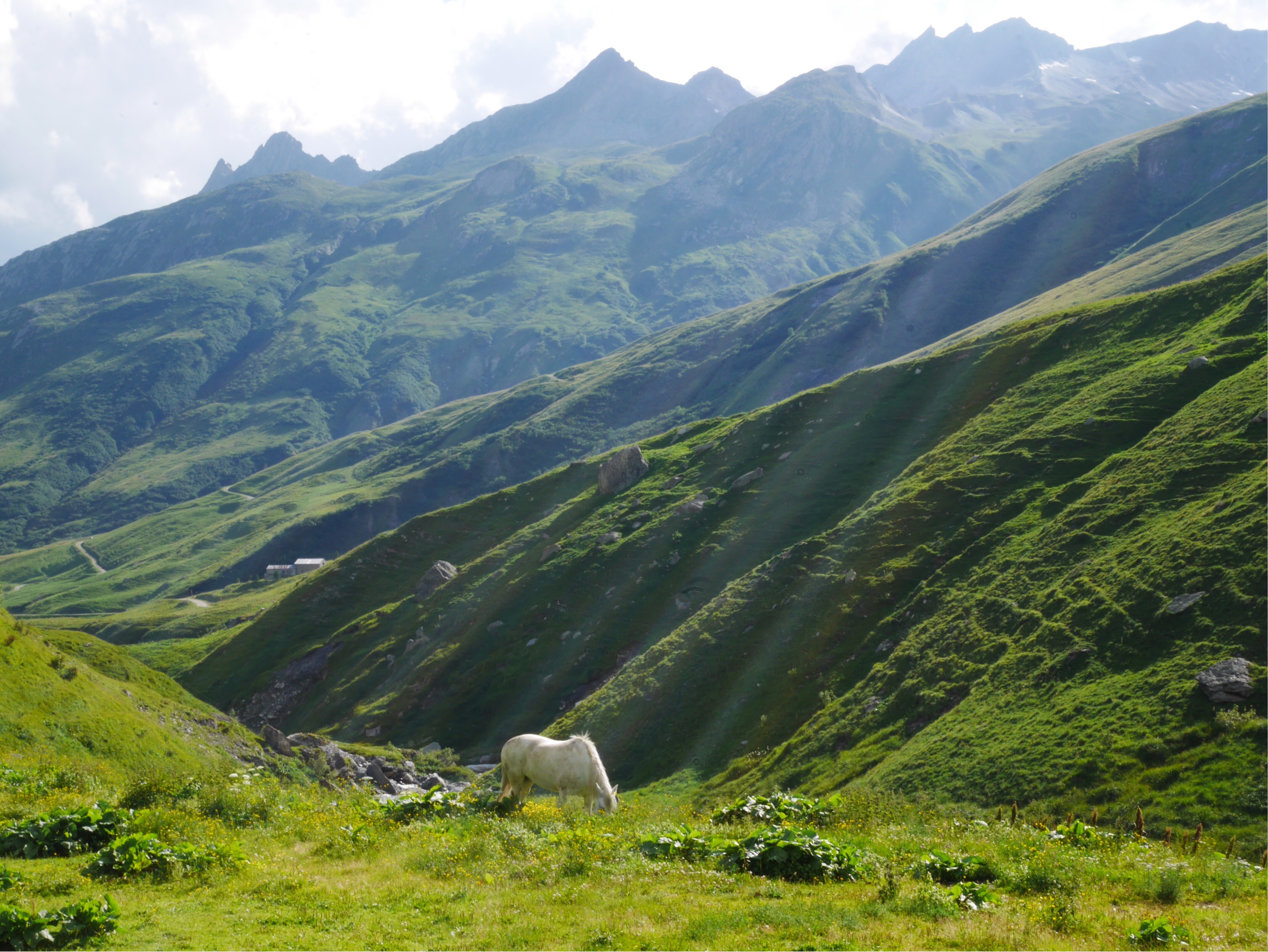 Dinner was a jolly affair, crammed onto benches with two British couples and some friendly Germans. There was soup and a bowl of sliced cucumbers and then beef stew and a piece of cheese and caramel custard. We wolfed it all down. I wonder whether we will use more calories than we consumed on this holiday. Though with all the chocolate and dried fruit and nuts en route, probably not.
A woman brought a hurdy-gurdy in as we were having pudding and we gamely tried to join in with everyone who knew the words to a song about the Champs Elysee. The British contingent got reasonably good at the chorus by the end of the song.

The Brits told us there were marmots all over the place outside so we went marmot spotting before bed but it appeared that they were already asleep. And so to bed.

Breakfast is from 6.30 to 7 so another early start beckons. 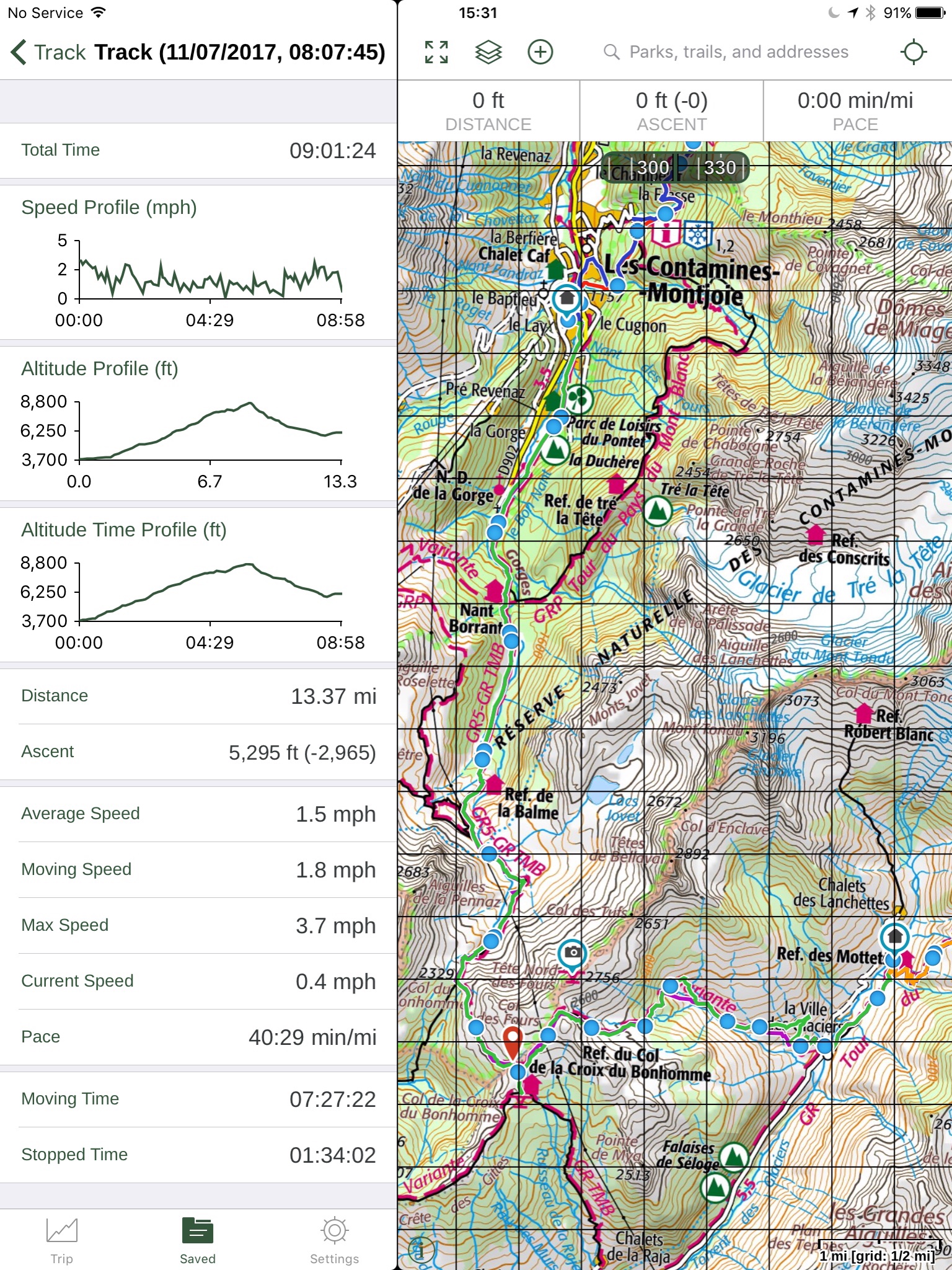