The last day of this magnificent walk began with bright sunshine and as picture perfect a view through the window of our bunk room as you could wish for. The three of us shared the tiny room with a Danish couple. It’s always a bit strange to share your sleeping quarters with people you’ve never met, but we all got on with it and it was worth it to wake up high in the mountains on such a magical morning. Breakfast was a rush of plates and cups and bread and coffee. Everyone was buzzing about the sparkling day outside. We were on our way by eight; somewhat weary after three days in a row of big hikes and an even bigger one to come. 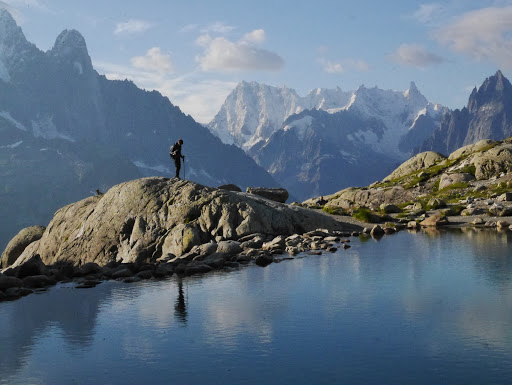 We tried to be the last out of the refuge, to have the mountains to ourselves as we set off. 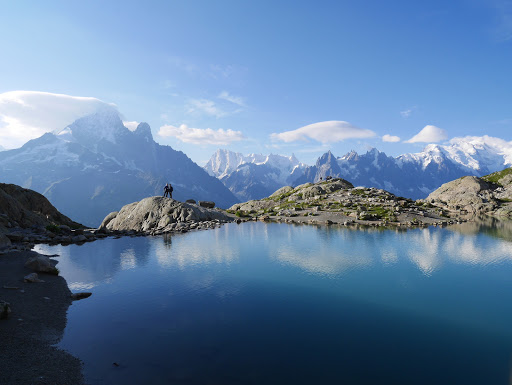 It was hard to put the camera down and get going, but today was to be a big day; a fair bit of up but seven thousand feet of descent too. This was to be a walk in stages, stopping at every refuge on the way for a chance to recharge.

The first was at a cable car station a couple of hours away. We sat with coffee in the sunshine as fresh faced hikers arrived by the cable-car load ready for a day in the mountains. There were wannabe rock climbers with helmets and a guide – and walking boots – which suggested they were going to be clipped to a safety line somewhere and taken up a tourist thrill route. They had group photos taken with Mont Blanc over their shoulders; thumbs up and much back-slapping bravado. The actual mountaineers arrived too, lean and wiry, with slim fitting climbing shoes and coiled ropes in garish colours. We were still a long way from finishing but we were no longer in the remote mountains.

The next bit of the track was a long, level walk along a steep mountain-side in hot sunshine. The trail was busy with people walking back down to Chamonix below us; summer holiday shorts out for the first time and white calves that were going to be pink in an hour or so.

Another ski lift station came into view on a ridge ahead of us, the path plunging down and then steeply up to it. It had a broad wooden deck and we had lunch, watching the parascenders take off from a grassy slope below us.

Tom was all for for getting back to Les Houches that way. But that would have meant missing the steep bit of uphill to come and where would be the fun in that!

Climbing the rocky col behind the restaurant was hard work with a belly full of lunch, but soon the ski station was just a little square of building far below us. The sky was on the turn though, with grey clouds rolling in. We met three young English women coming down. They said they’d been told the big cable car at the summit was closing because of a storm and they’d decided to turn back. Our only alternative option was a long, steep switch-back path down to Chamonix. We were halfway up the col and decided to press on. If we got wet, we got wet.

We didn’t. The storm never came and at the top of Col du Brevant we were rewarded with the sight of little Ibex, blending perfectly with their surroundings.

They weren’t that bothered about us, but we were thrilled to see them having more or less given up on the idea.

Behind the col was a rocky basin; utterly still with no wind and no noise apart from the occasional click of Ibex hooves on rock.

It struck me how rarely it is actually silent in these mountains. There is always some sort of breeze as an underlying soundtrack and as you move over ridges and into valleys the low roar of a glacial river across the valley or the trickle of a steam nearby, come and go as you rise and fall. There are always birds too; invisible larks with their constant, complex song high in the air, the echoing shriek of a bird of prey, and the more familiar sounds of blackbirds and crows. Often there is the distant clatter of a helicopter, or the shouts of another group of hikers or climbers somewhere unseen.

We stayed for a while in the bowl, and realised we could watch these ibex for as long as we liked but it was now coming up to three and we still had a ways to go.

Around the back of it there was a short ladder section which compared to The Ladders Of Death was a walk in the park.

We kept thinking we were at the top, but suddenly we could see the top and we weren’t at it. It was a viewing platform above the Brevant cable car. From a distance it appears to sit on a death defying pinnacle of rock but as we got closer we could see that the pinnacle was fairly broad. It seemed to take forever to get up to it up a gravel service track.

It was the highest point of the day, and the last ascent of the TMB. 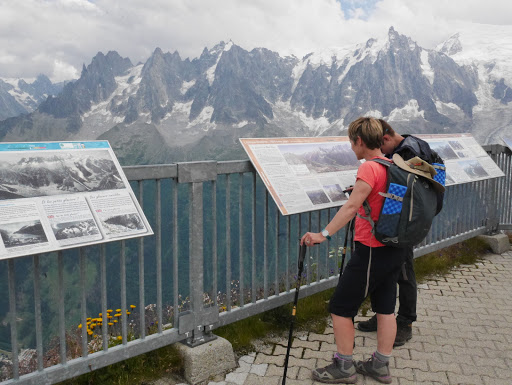 Once again there were crowds of people coming off the cable car for their taste of the mountains. The cable car was also our escape route if we wanted it; a chance to avoid what the guide calls one of the hardest continuous downhill sections of the whole route: three hours of steep descent into Les Houches where our journey began. It was tempting, given that it was now four o’clock and we still had 8K to cover. But we’d always said that if our knees were up to it, we should complete the circle around Mont Blanc. So down we went.

Initially it was tough going, over big rocks and under grey skies. Both P and I were feeling weary and secretly wondering if we had made the right choice. Les Houches seemed a long way off…
But the path smoothed out over a ridge and down the grassy slope and after an hour of walking we came to the tiny Refuge de Bellachat perched on the mountainside. Its wooden deck was buzzing with people including some we’d seen at Lac Blanc that morning. The women working in the tiny kitchen were all smiles “Bonjour, bonjour”. All the hikers outside were in a jolly mood, either having nearly finished the TMB or having finished their day’s walk at this pretty refuge. There was lots of laughter and a big buzz of conversation. It lifted our spirits and we had coffee (and Sprite) over myrtleberry tarts which stained our fingers red. The final six K didn’t seem so far now.

The way down from the refuge though was very steep, switchbacking down a grassy cut between rocks. Occasionally we had to cross little gorges along narrow goat paths in the rock, set with chains or handrails which were too low to really grip. The thing P and I both noticed though was that we felt up to this final, steep descent. Our knees weren’t protesting and after two weeks of this our bodies seemed entirely comfortable with this sort of walking.

The settlements down in the valley got a little nearer at every turn but we still seemed to be way above them.

The path began to even out and we came into to pine woods, the path a springy relief after all the rocks. We walked along a fence marking the edge of the Mountain Zoo and all of a sudden we hit tarmac. A couple of families were leaving the zoo, and walking down the road with us. The sky was dark and it began to rain. The families were picked up in cars and it was just us, in our waterproofs in the final hour of the walk.

The path left the road and cut through the woods where the rain was kept at bay by the foliage overhead. Thunder rolled around above us and a church bell rang. There were signs for the railway station at Les Houches and we crossed and recrossed the road down the mountain, passing slate-roofed wooden houses dripping in the rain, and a giant statue of Christ looking down the valley. The sky was getting ever darker and the rain was falling in rods when we popped out onto the road for the last time.

And there was Les Houches station, a tall nineteenth century building, its shutters closed and a train pulling out. We’d missed the 1933 and the next train to Chamonix was an hour away.

But we’d made it! We walked the TMB with no short cuts, no taxis, no cheating at all in fact – and we did all of the toughest route variants. Well done us! 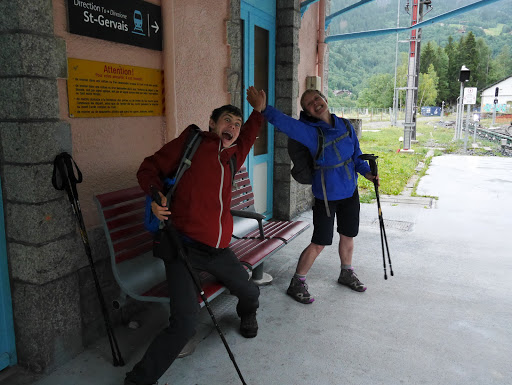 We were almost too tired for euphoria and we still had to get to our hotel in Chamonix. I rang a number on the notice board which promised taxis and “English spoken”. Neither were offer though. “Desolet” said the lady at the other end. So we waited for the train, watching the rain fall and finishing the trail mix. 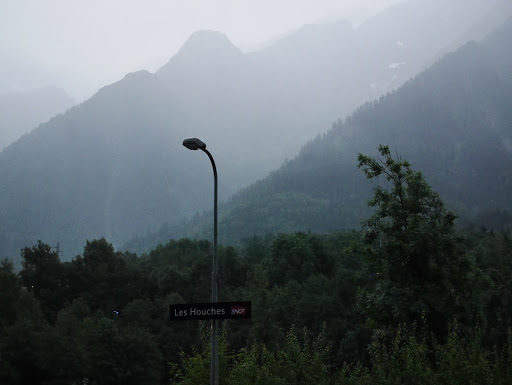 At 8.33 precisely the train arrived and the smiley conductress charged us two euros each to get to Chamonix, fifteen minutes away. It was the first time in more than two weeks that we’d used something other than our legs to get somewhere and it felt strangely smooth and fast.
The rain was still pouring when we got to Chamonix and walked through mostly empty streets to our hotel. Tom was ready to sleep but the friendly young woman at reception suggested a cosy Italian restaurant in an old stone basement five minutes away which seemed like a good idea. Pausing only to dump our packs we went straight there and sat in our damp, muddy hiking gear toasting our success. Tom, who never missed a beat on this whole trip, never complained when it was hard, and always maintained his enthusiasm, had a garish mocktail His parents had “Mont Blanc blonde”. It seemed appropriate. 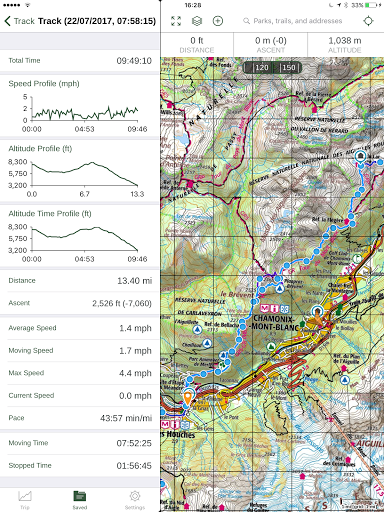