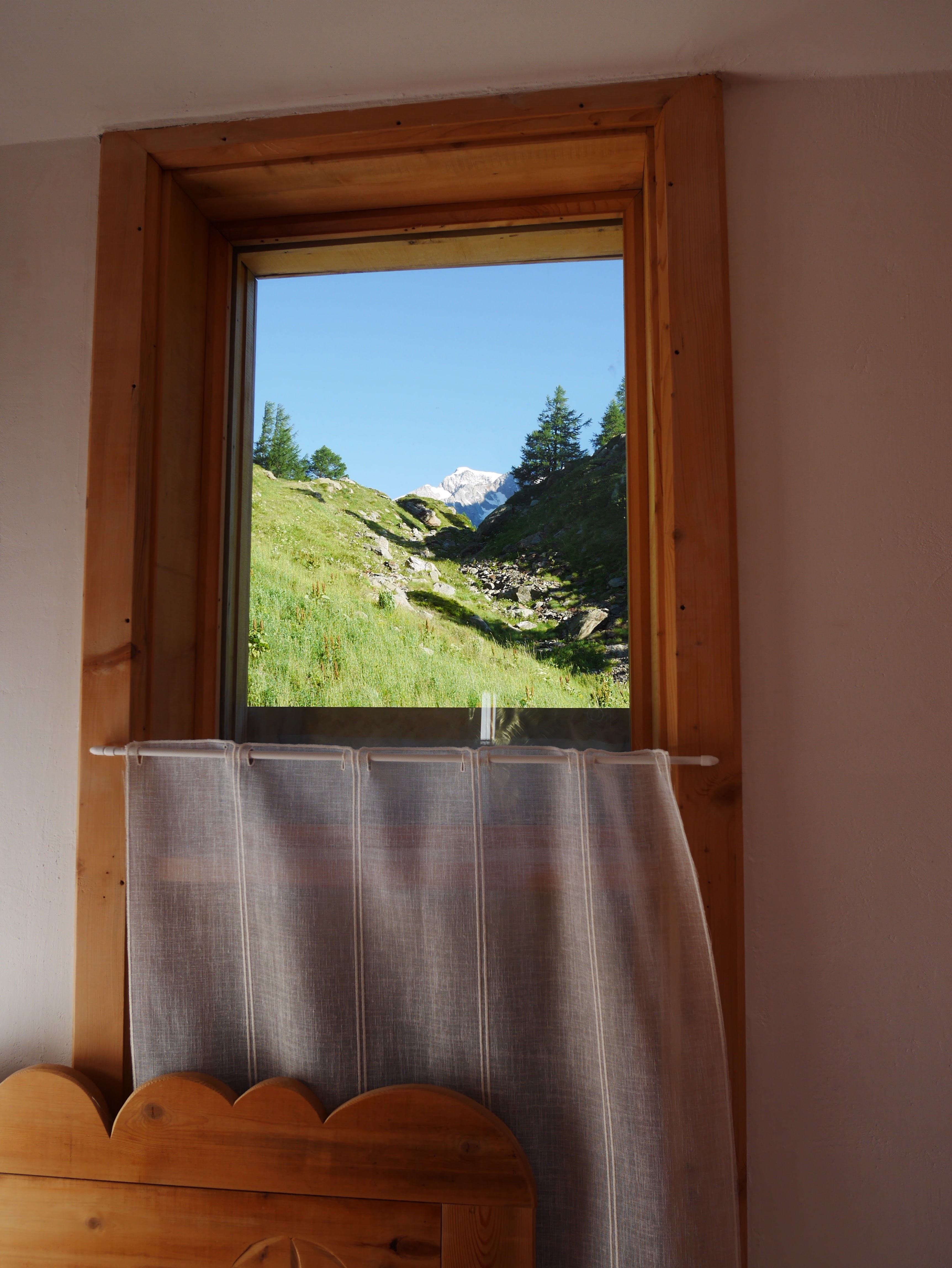 Good morning Italy. Our bedroom windows this morning framed perfect little landscapes of green hills and distant snowy peaks soaring into a clear blue sky. Today was to be our shortest walk so far. An easy seven miles or so with a bit of uphill to start, as seems traditional, followed by a long coast into the ritzy ski town of Courmayeur. Well it wasn’t quite like that but it was a spectacular day…

Tom had another huge bar of chocolate melted into a mug with his breakfast and we all fell on the gorgeous fresh breads, creamy butter, cheese and jam. We’d ordered packed lunches from the Cabin too and were given bags of huge sandwiches, along with hard boiled eggs, a dozen or so little plum tomatoes with sachets of salt and olive oil. Oh and a huge bar of chocolate each. And apples. We could barely fit it all in our packs. 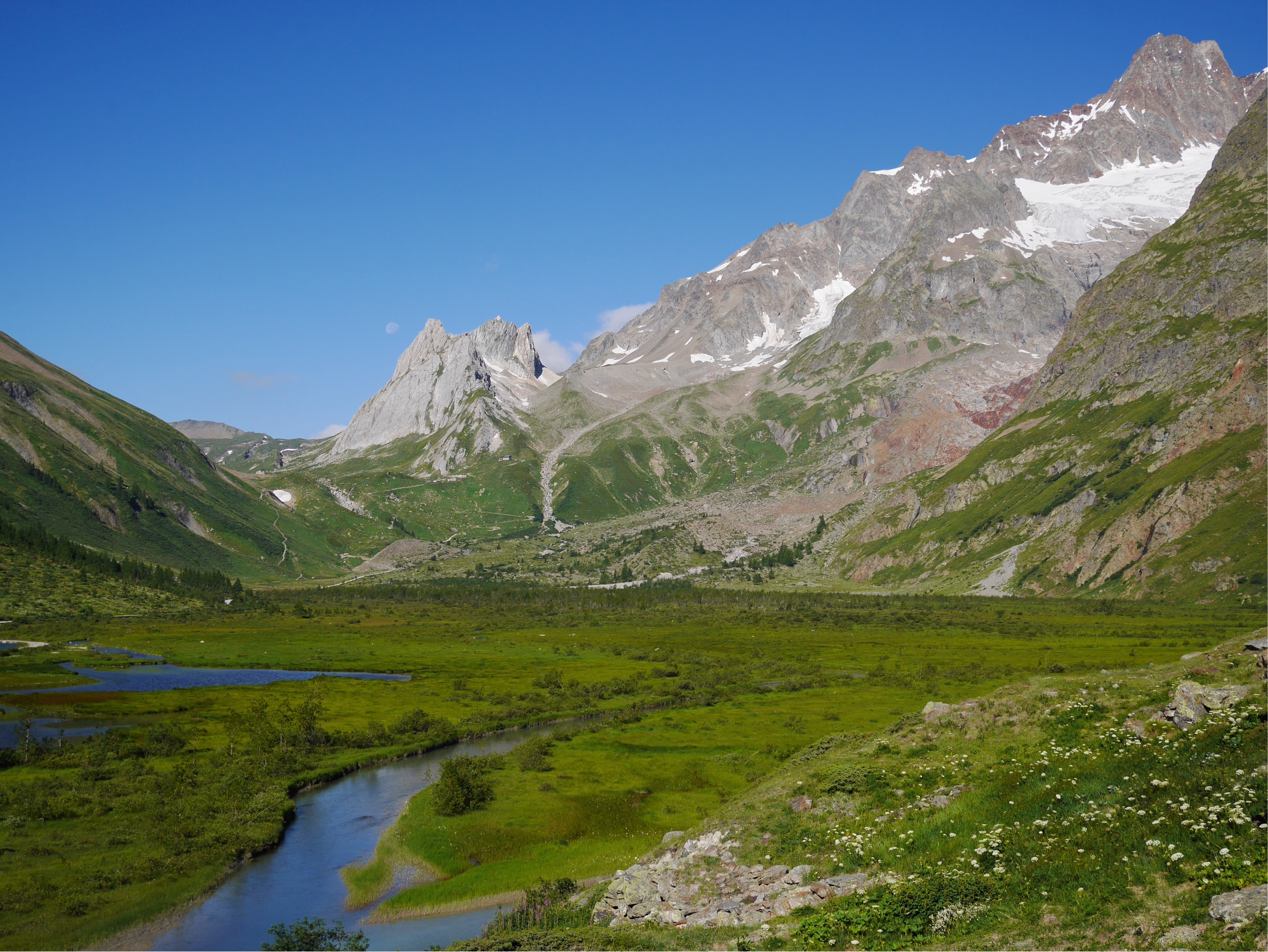 Out and up. And up a bit more. The sun was strong and once again it was a bit of a climb. 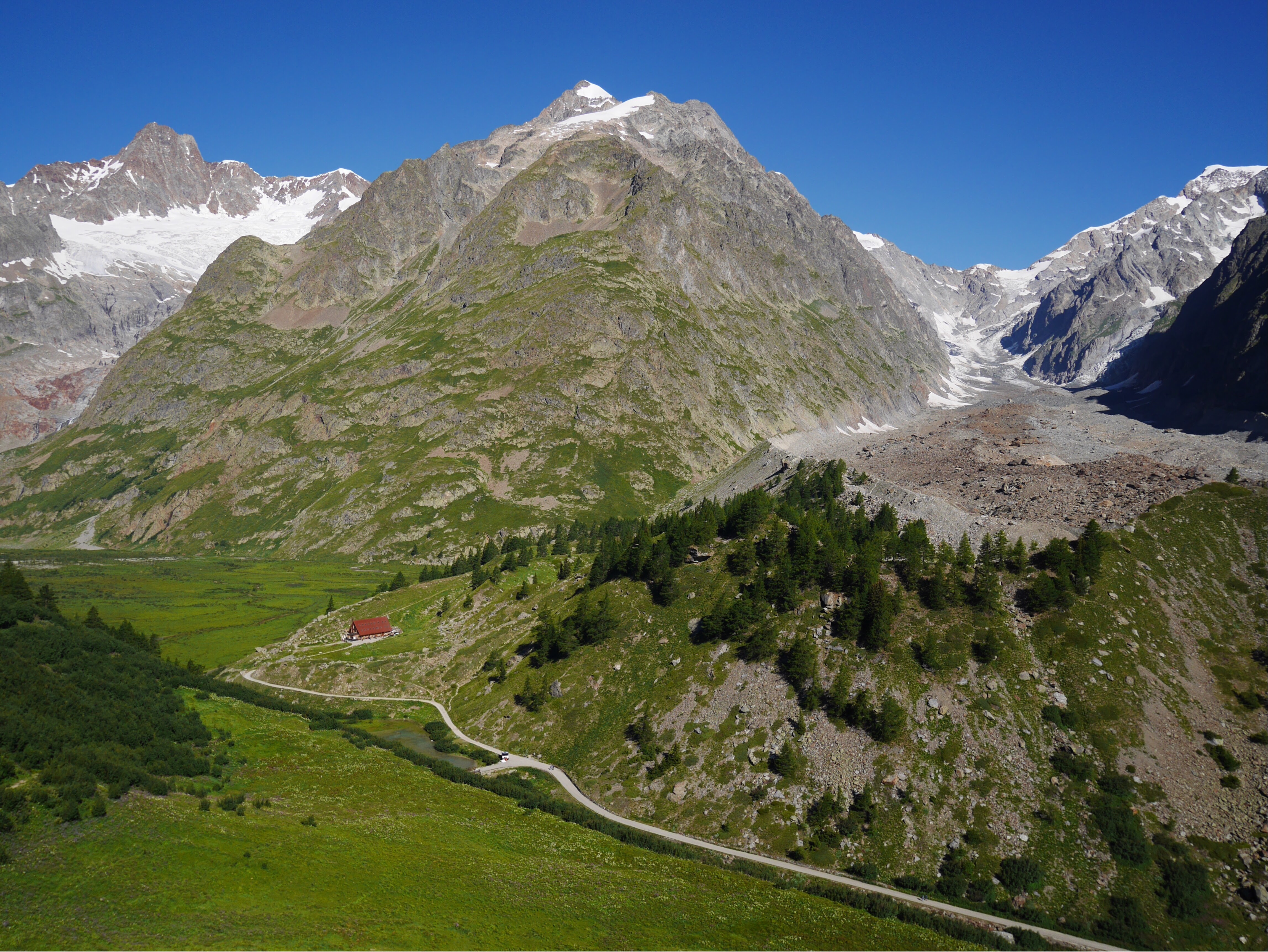 But the view across to Mont Blanc was stunning. 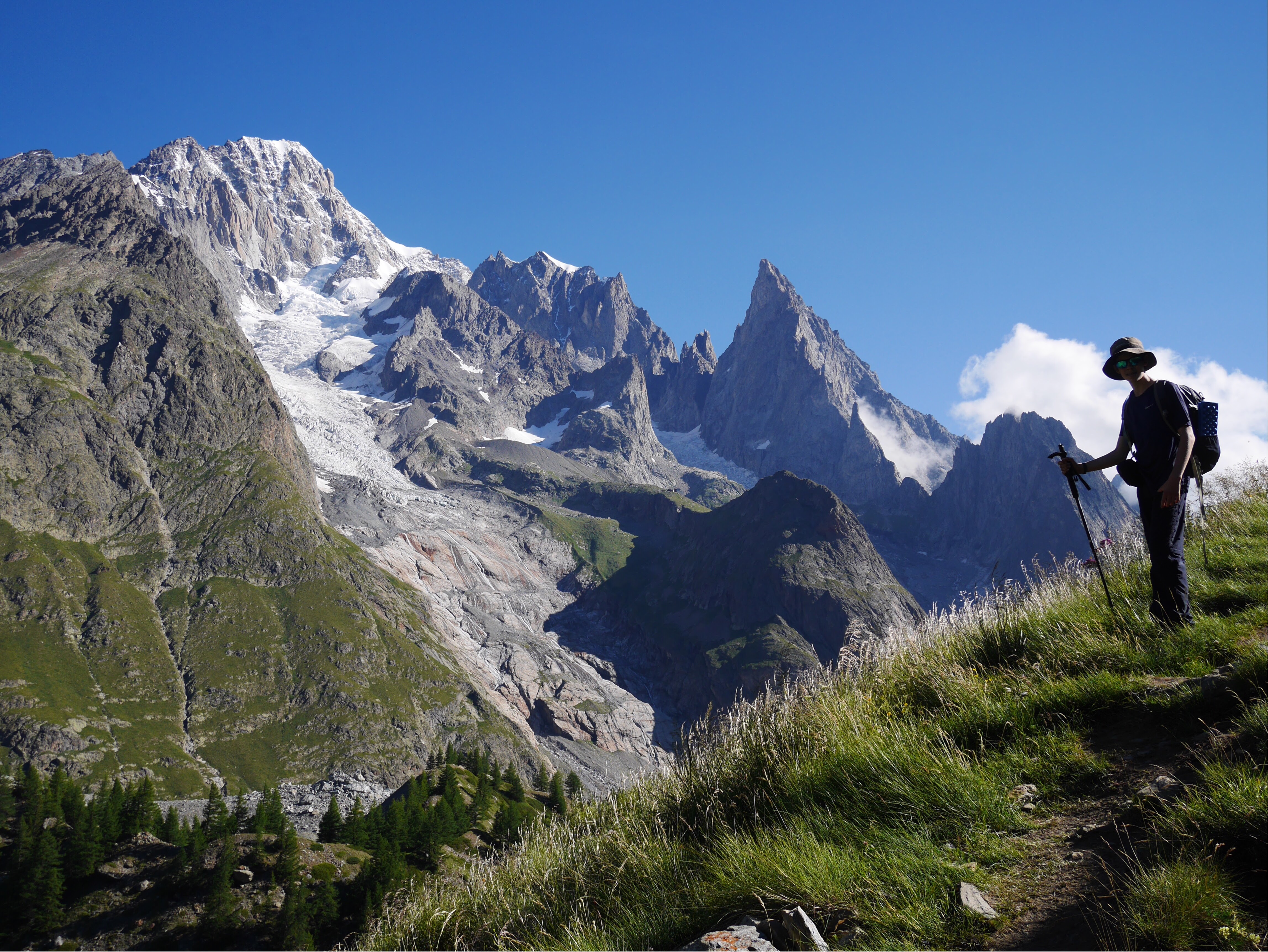 As we rounded a corner a helicopter flew up out of the valley and perched briefly with the front of its skids on the path ahead of us, to let two orange-clad workmen out. It flew off and we made to continue but the workmen waved us back and a couple of minutes later the helicopter returned with a section of ironwork. 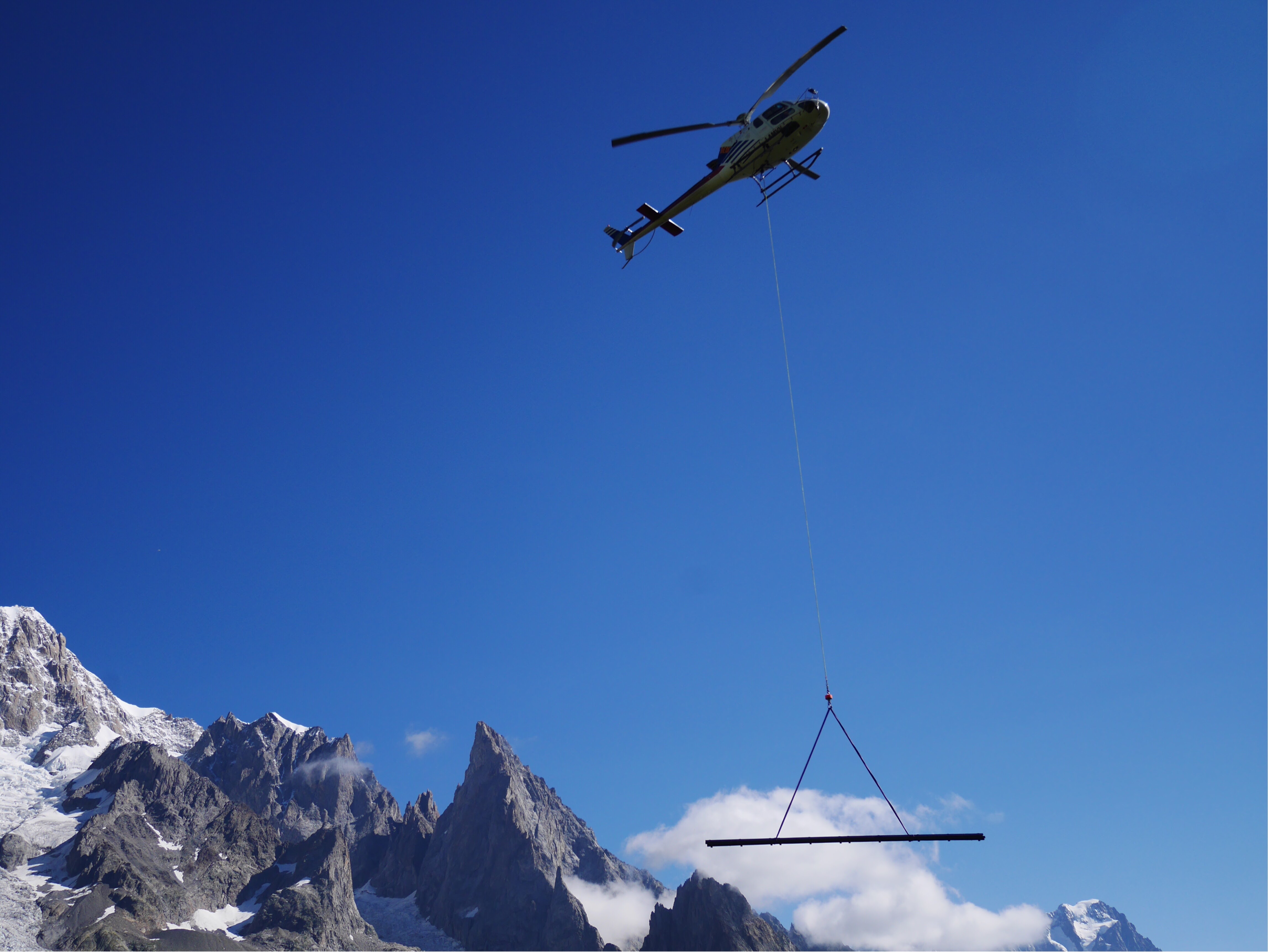 We watched it go back and forth with the makings of a footbridge to cross a river of meltwater. The pilot clearly relished swooping about so close to the steep slope and the rotors chucked up a mist of spray from the river every time he took off. It was exciting stuff! 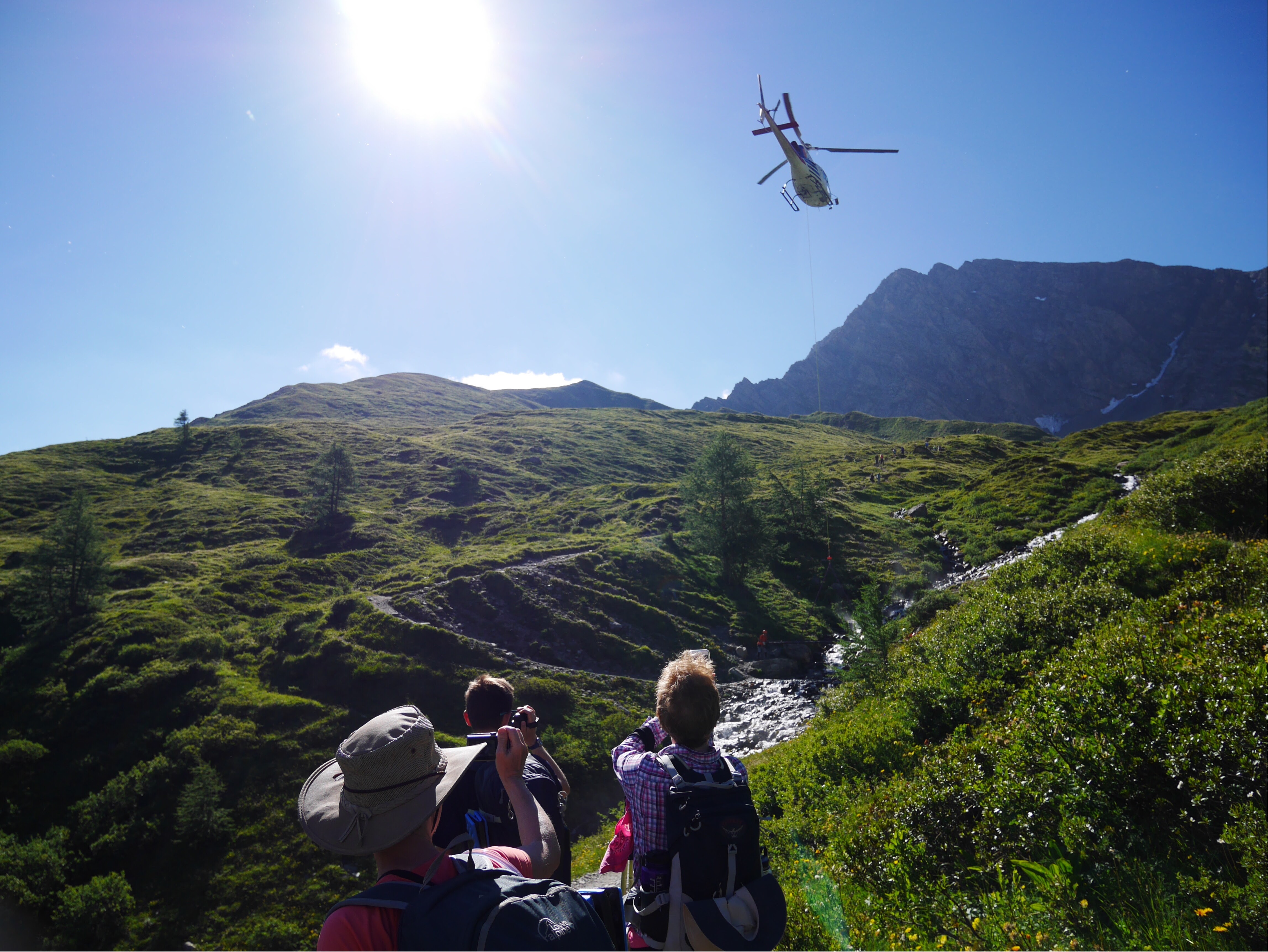 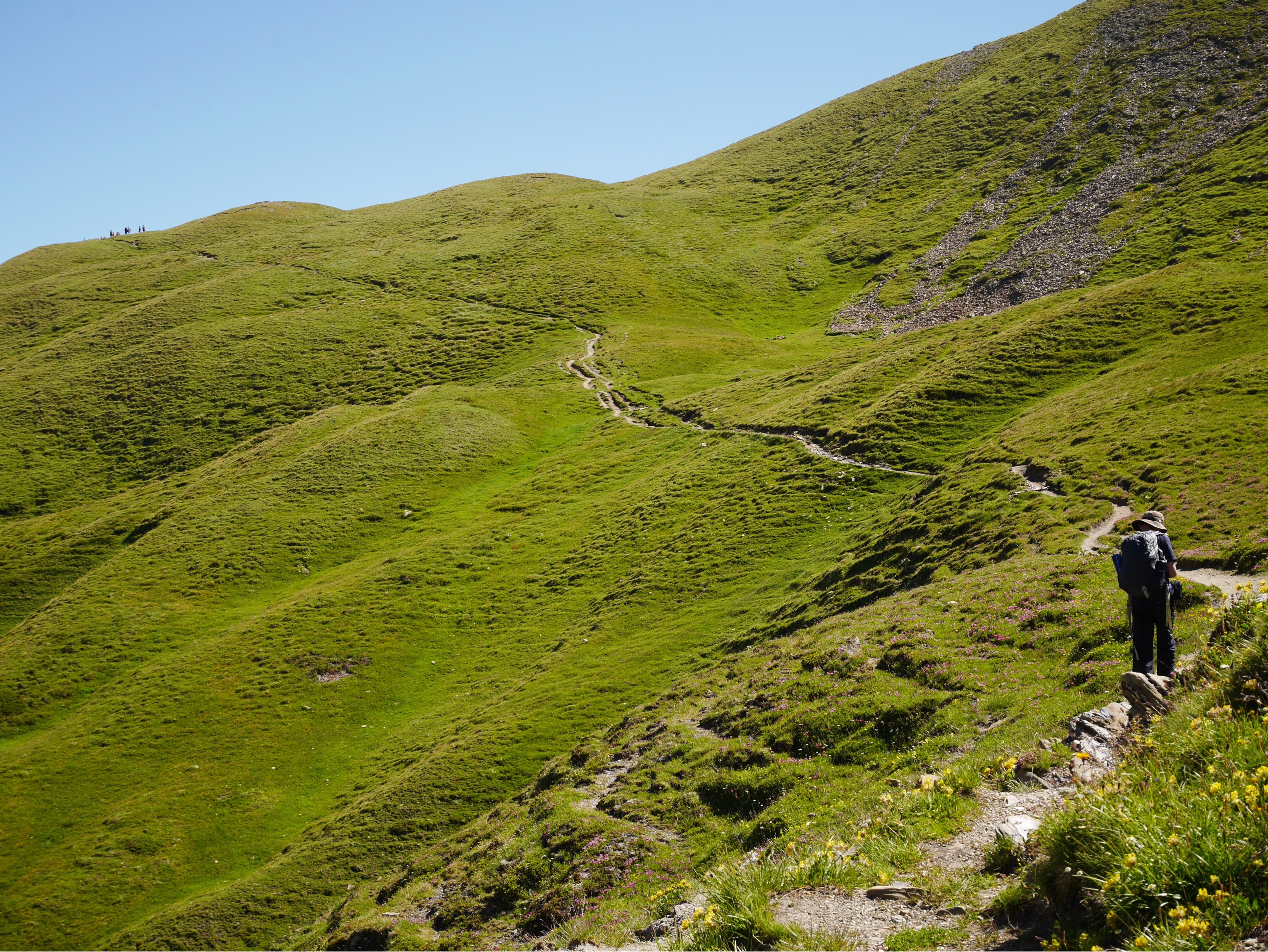 After a bit more climbing in the sunshine we stopped for a snack surrounded by wildflowers and butterflies. We pulled out the apples and I snicked open my Swiss Army Knife which I cleaned and sharpened a couple of weeks ago, gashing my finger in the process. I sliced into an apple, fumbled the knife and somehow ended up with a deep cut in the side of my thumb. I probably shouldn’t be allowed to handle penknives. My thumb was pouring with blood. We got the first aid kit out and cleaned it up and I held it closed for half and hour or so while we ate the bloodstained apple. It actually healed over in the wind and sunshine remarkably quickly but I had to carry in without the hiking poles which we have all found to be really invaluable for the steep bits.

The route follows along the Val Veni climbing and dipping through green meadows which are now full of butterflies. Every so often we walk through small clouds of them at our feet. The southeastern slope of Mont Blanc faces us across the valley, lofty and silent. It is a beautiful walk with the peaks lining the valley like soldiers. 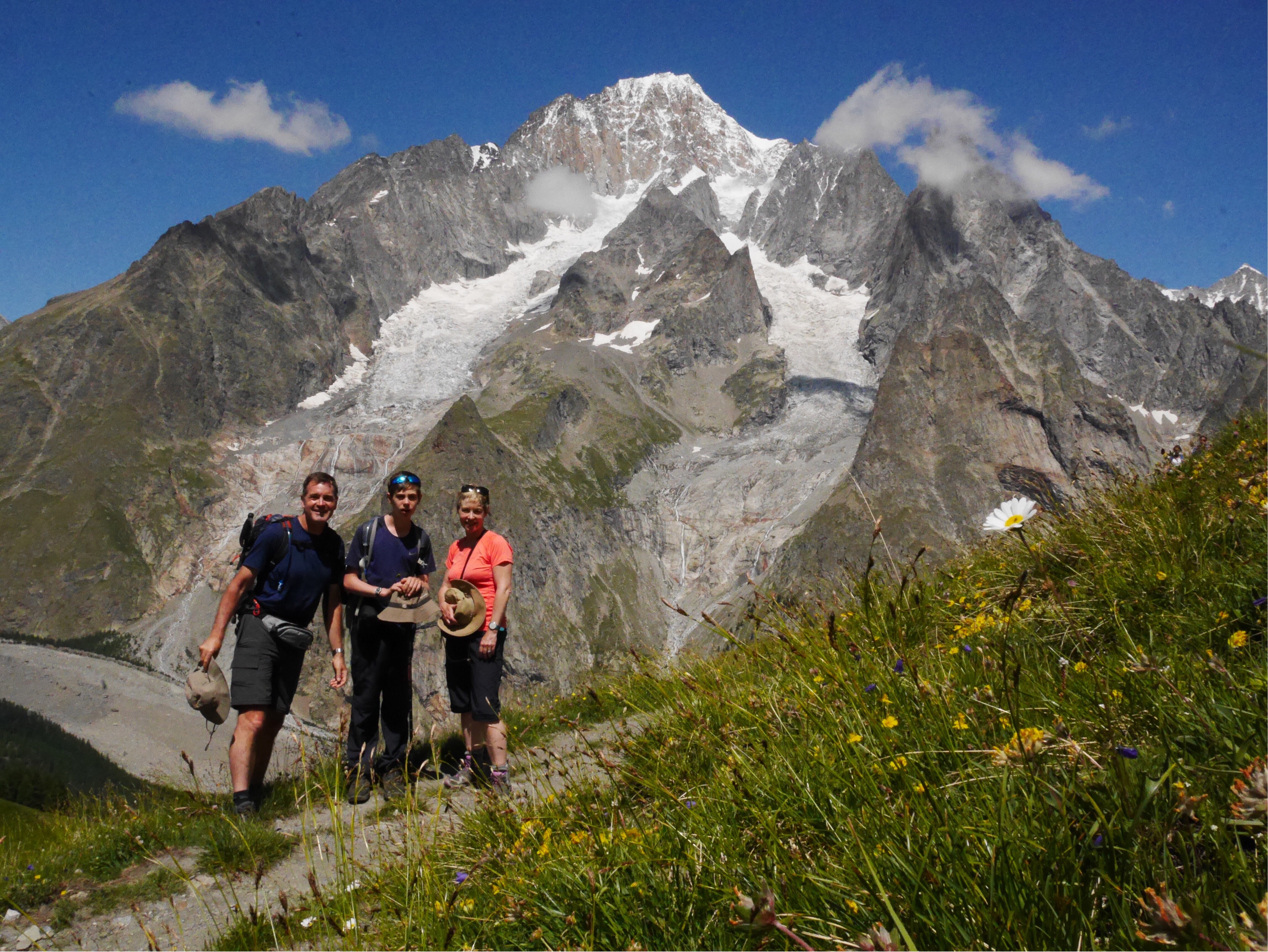 At the highest point of our day, which my map says is L’Arpe Veielle Sup. (2303m) We have a break, gazing down into the valley. It’s a hard spot to leave on a day like this. A little further on we have lunch and discover that little plum tomatoes shaken in a bag of olive oil and salt are hard to beat. 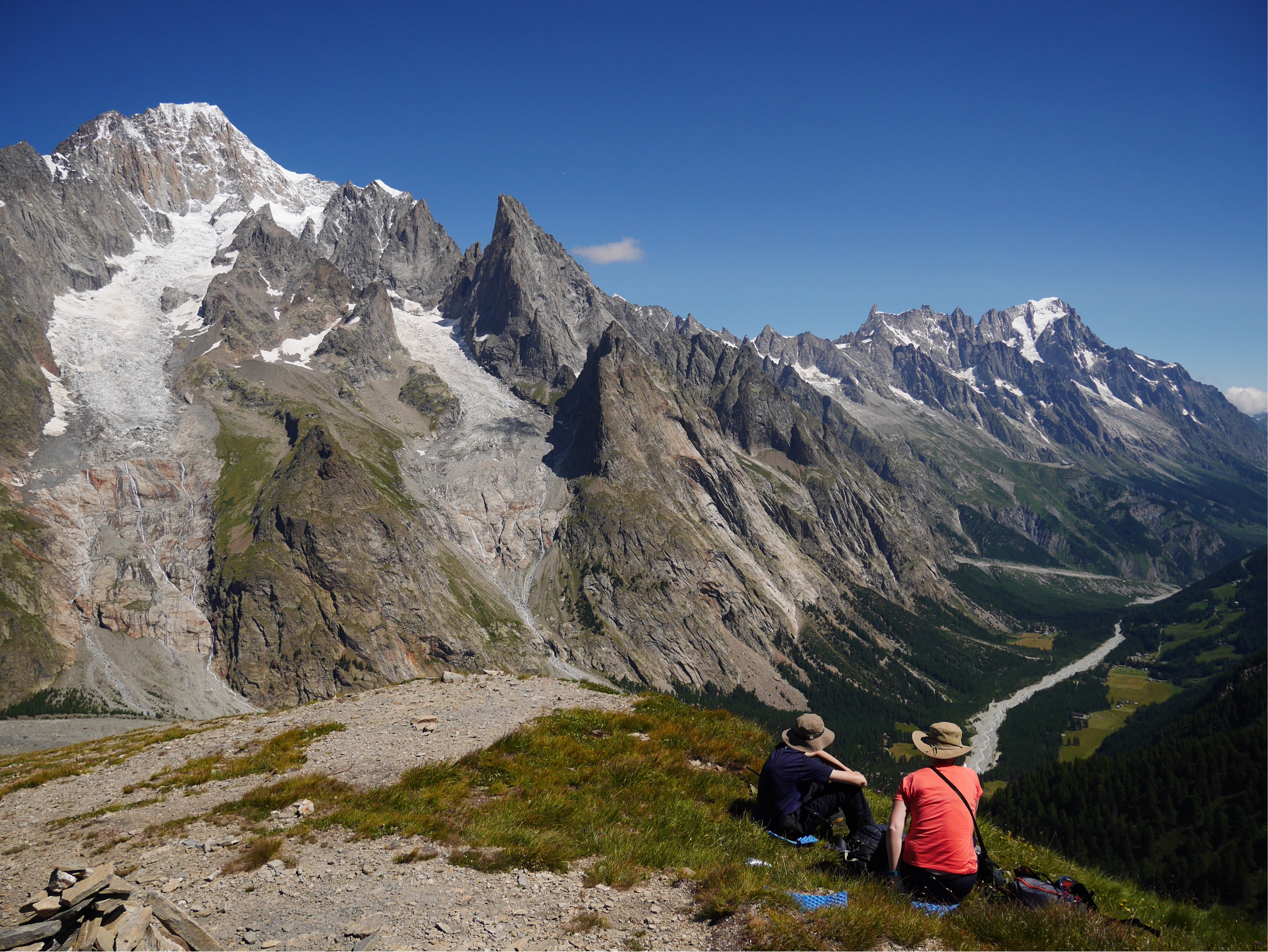 And so it’s downhill from here. Literally, but not figuratively because we are walking through a scene from a chocolate box in perfect weather. 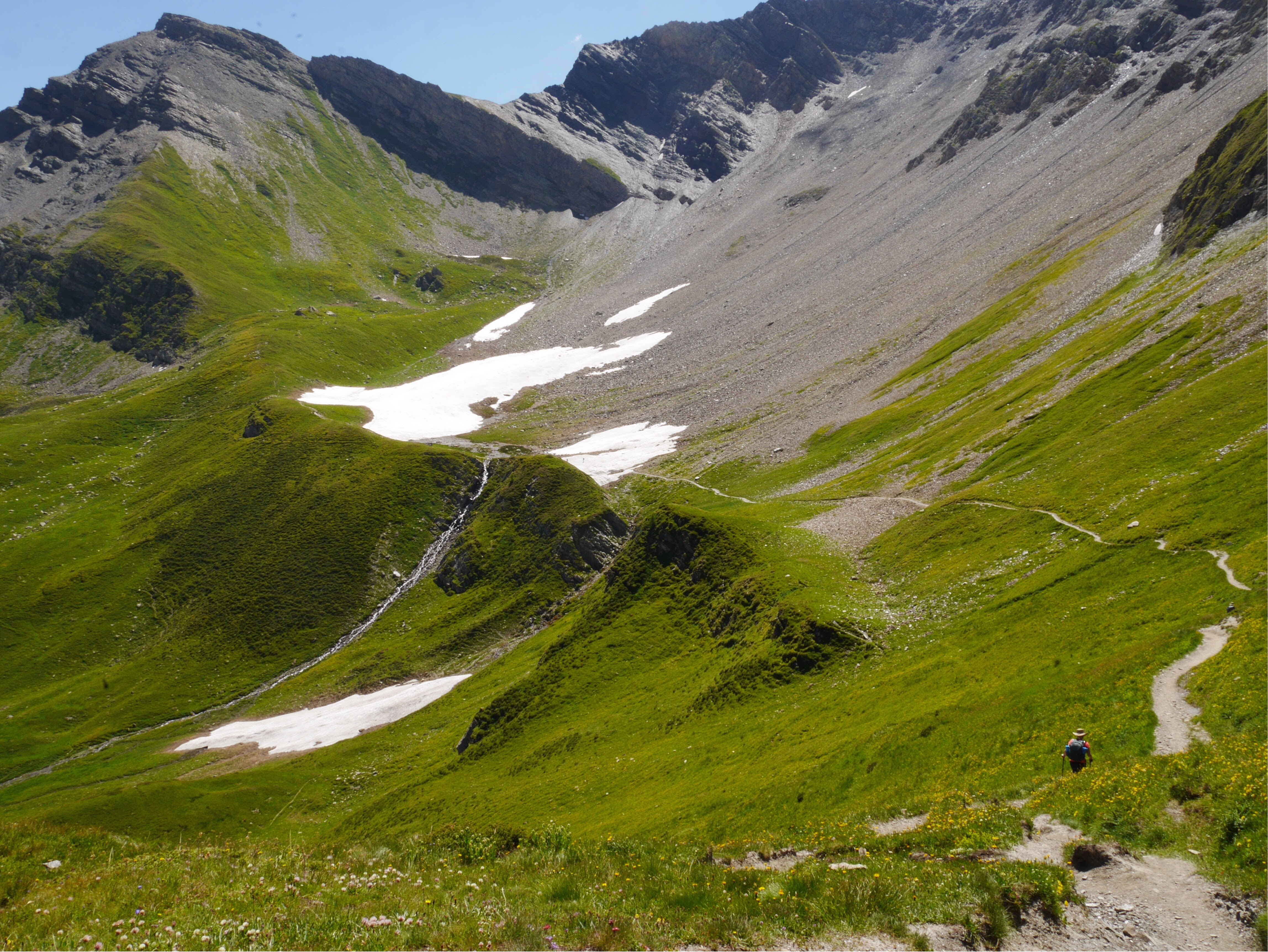 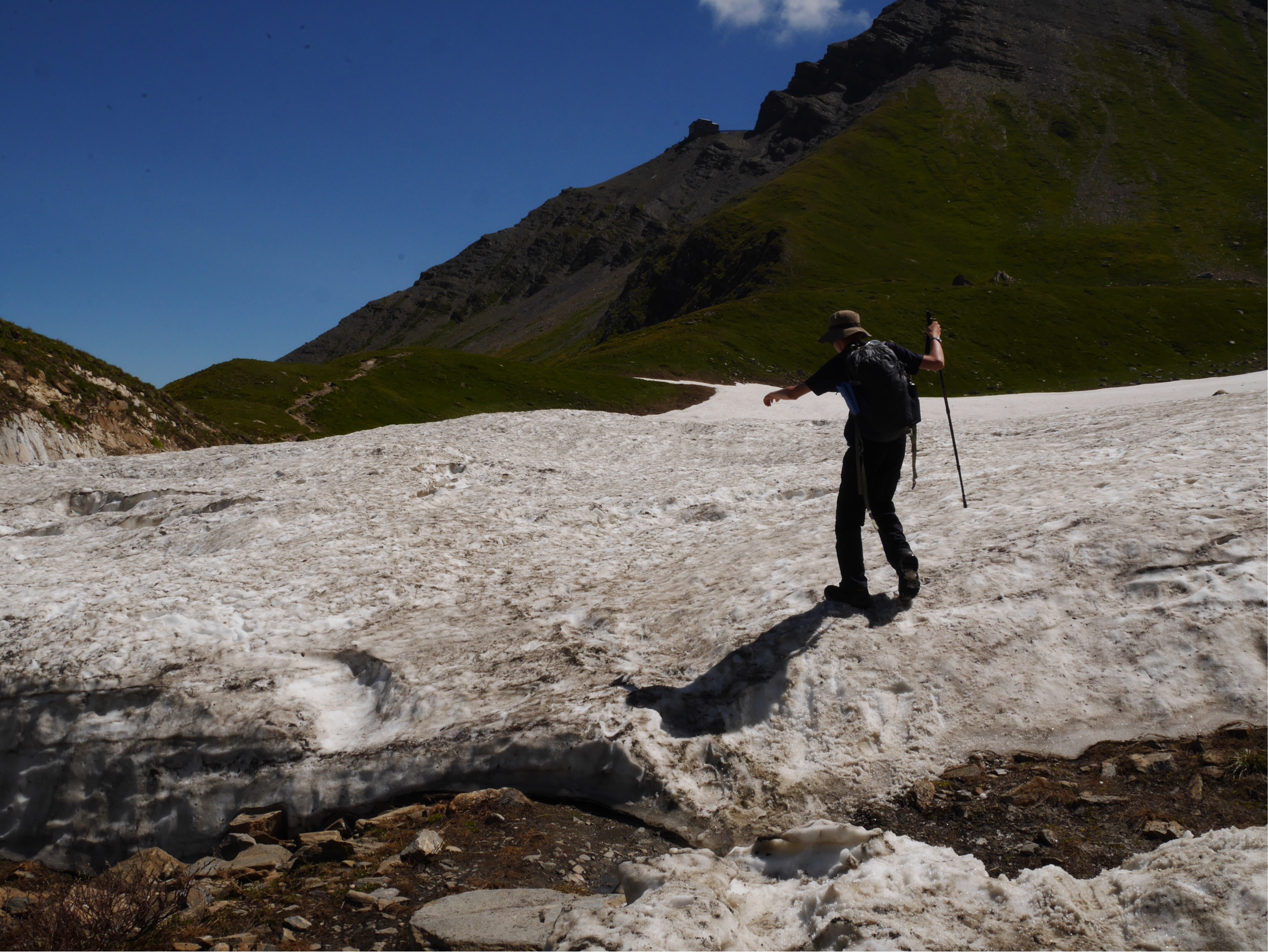 We even pass a small lake, the sole purpose of which seems to be to reflect the gorgeous view. 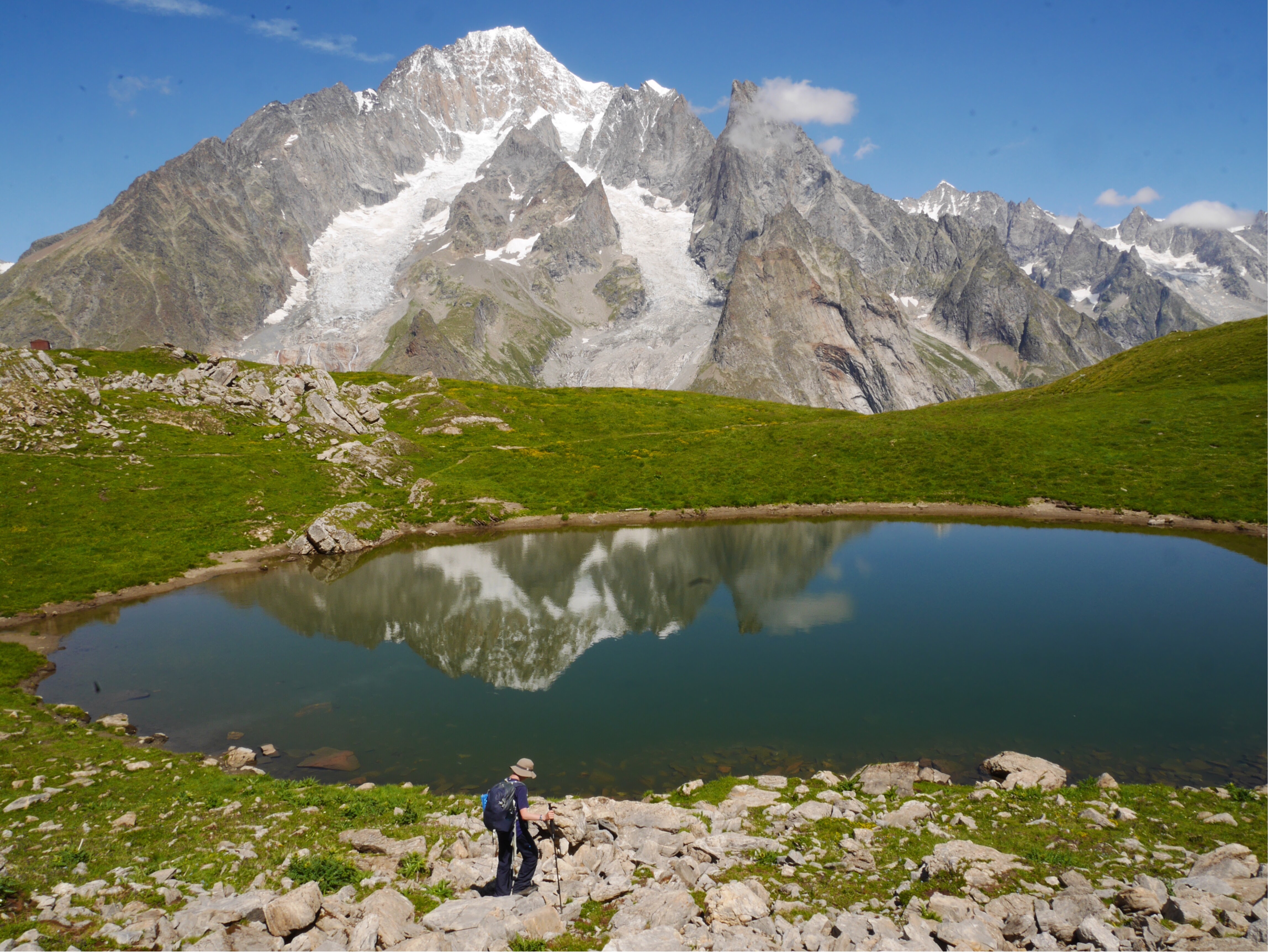 As we descend it gets hotter and a refuge in the saddle of two low peaks has cold drinks and a place to sit. 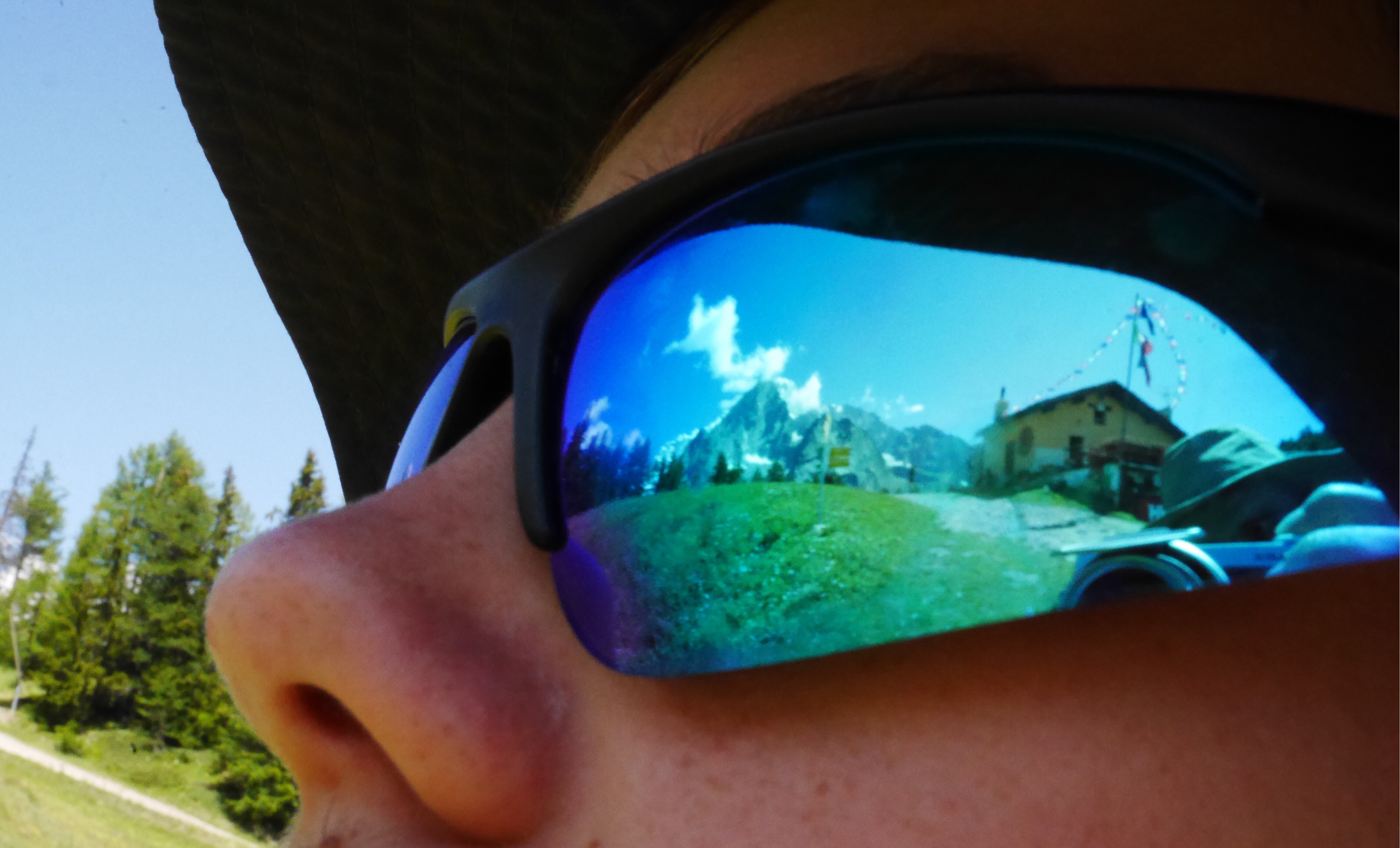 Tom battles with the breeze for control of the umbrella. And Tom wins. It’s a difficult place to leave but it’s now early afternoon and to our surprise we have only covered about half of today’s short walk. So we press onwards and downwards, past a cable car station where we could have got a telecabin down to Courmayeur but having walked this far… and it was here that the path turned into a tiny, narrow goat track clinging to the side of the hill and so steep that it was all we could do to stay upright. It took us into the cool shade of the woods, which was a relief at least, but it was hard on the knees and slow going. 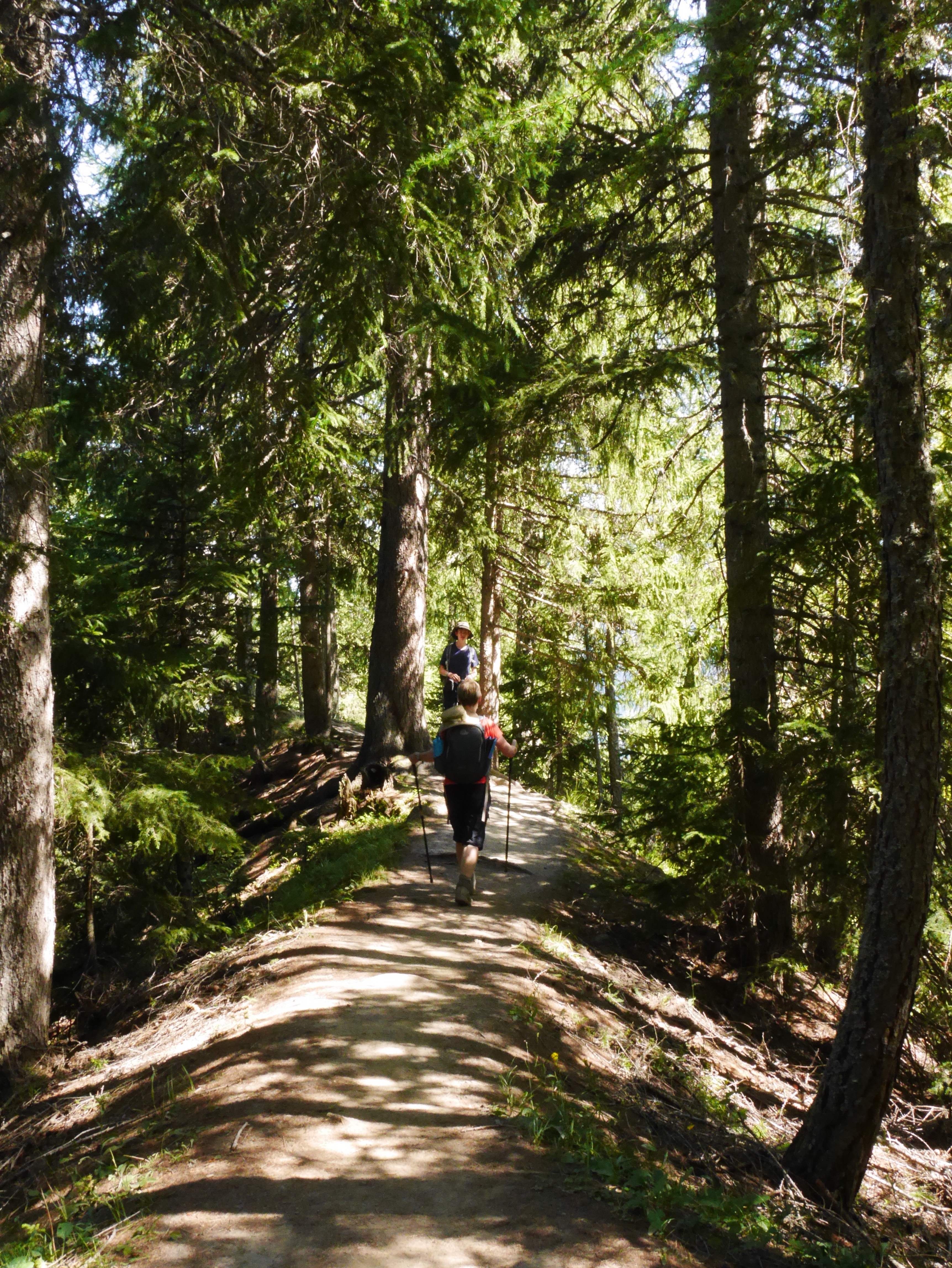 At the stone-built village of Dolonne we had visions of a sunny square and some cold drinks, but Dolonne was shut and we pounded hot tarmac into Courmayeur. 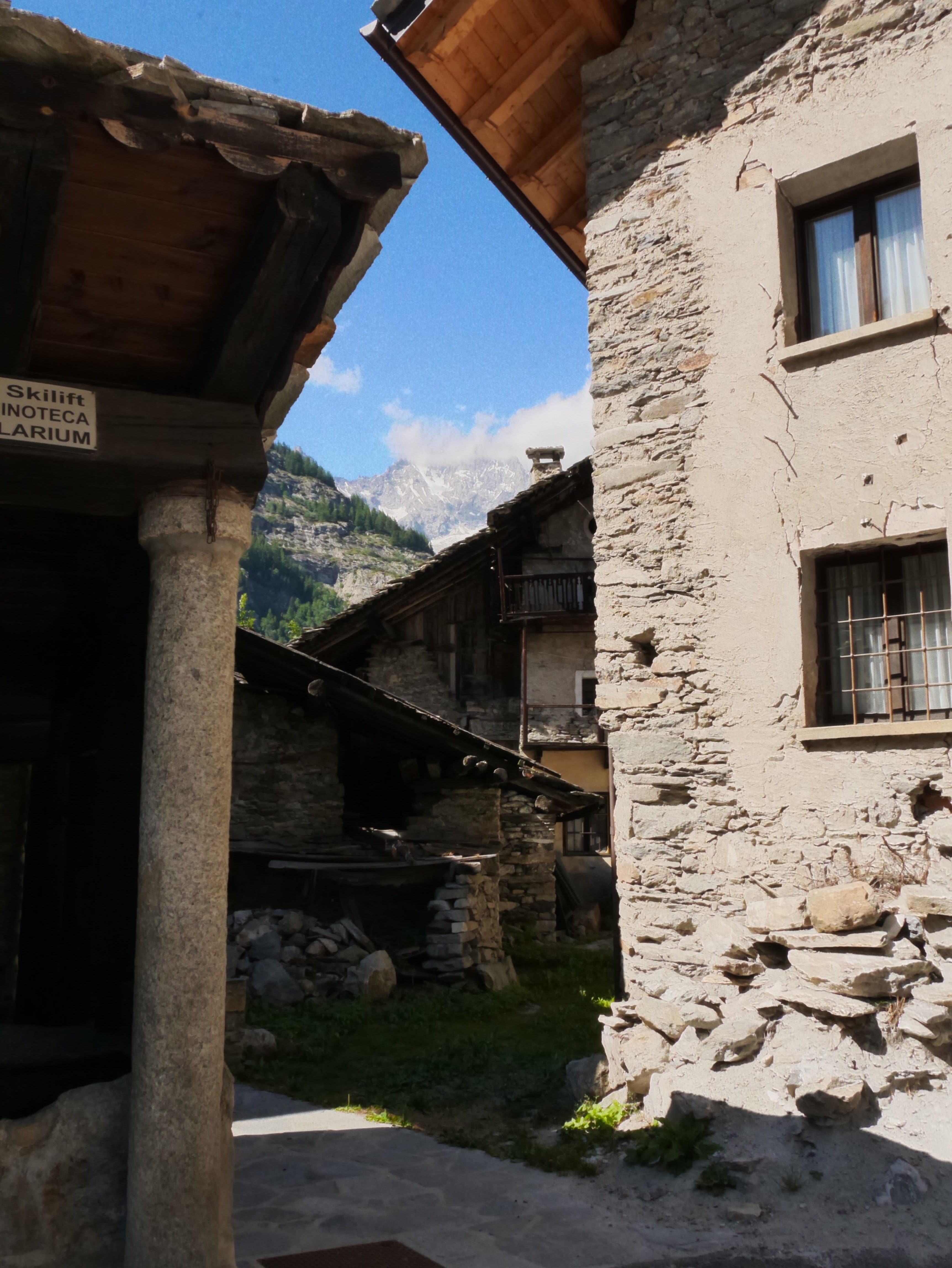 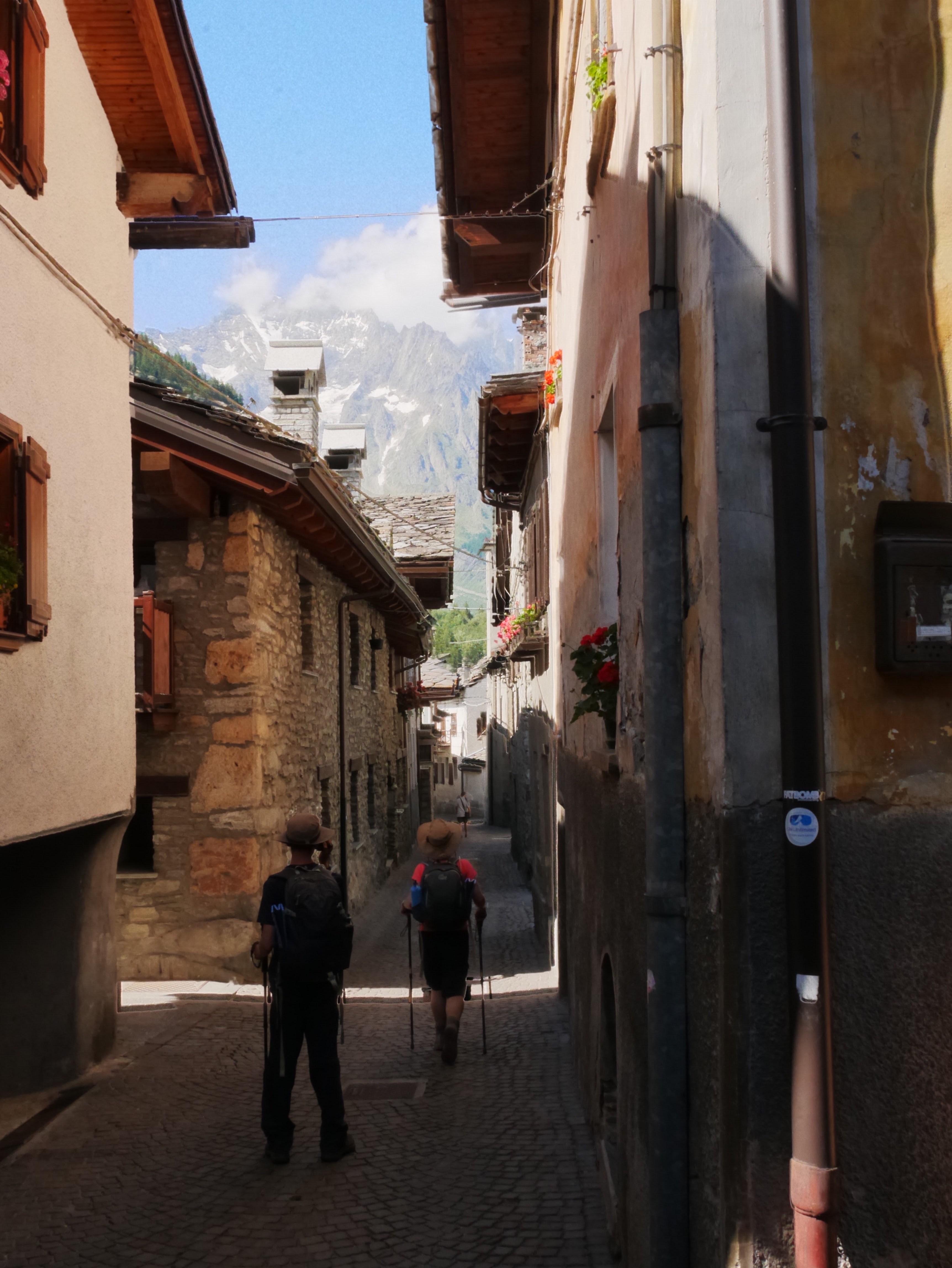 At the first snack bar we came to the lady at the counter took us in hand, scooping ice creams for P and T and big glasses of Panache (shandy). We sat in the shade taking in the novelty of a substantial town with people and cars and buses and everything.

Our hotel was another fifteen minutes walk and it was lovely to have showers and clean towels and fresh clothes. Tomorrow we find a laundromat, but tonight we have pizza. And we did, sitting outside looking up at the mountains we had walked through. Only eighteen hundred feet of climbing but more than four thousand feet going down! 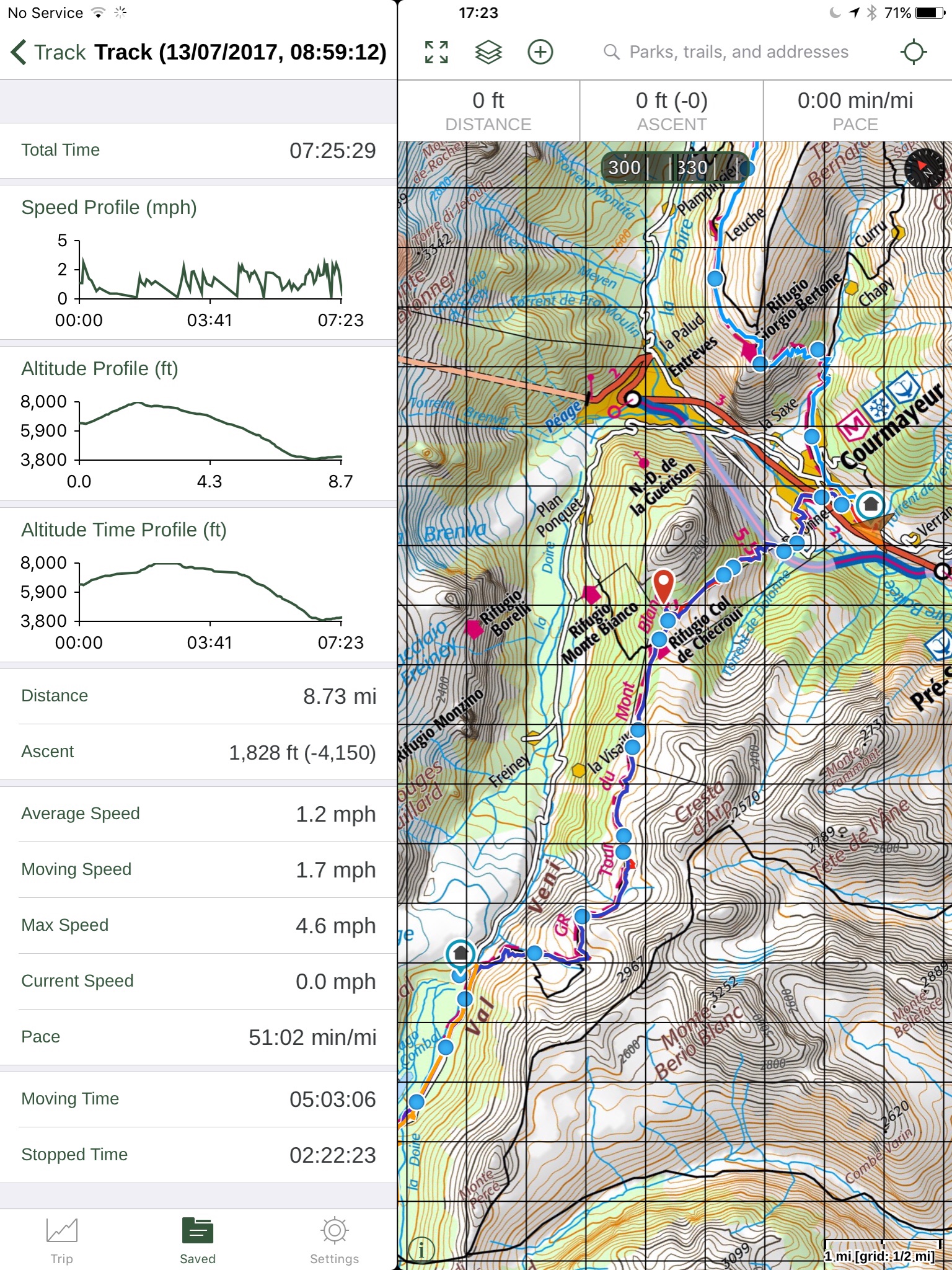