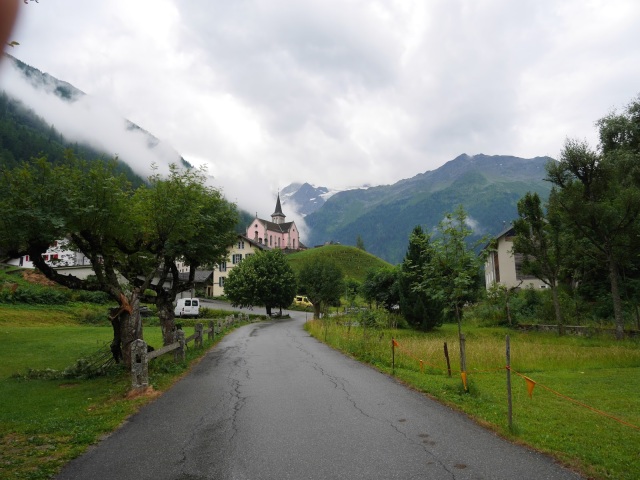 We woke to overcast skies for the first time in days. The cloud obscured the mountains and all looked rather unpromising. Breakfast in the dining hall was basic but what we needed. I saw one of the Handsome Dans briefly but Kaitlin had gone, off over the mountains by herself. We ate our bread and cheese and jam and yoghurt with bananas and coffee and orange juice by ourselves. This hotel is an odd sort of place. It feels like an old municipal building with its rough granite stairs but Trient doesn’t seem as if it would have ever needed such a place. So maybe it was always a hotel, although one that now caters to sweaty people with backpacks. When we got back to the room it was raining outside so no rush. We read for a bit until the cleaners knocked on the door and we realised all the other guests had gone. And so had the rain. 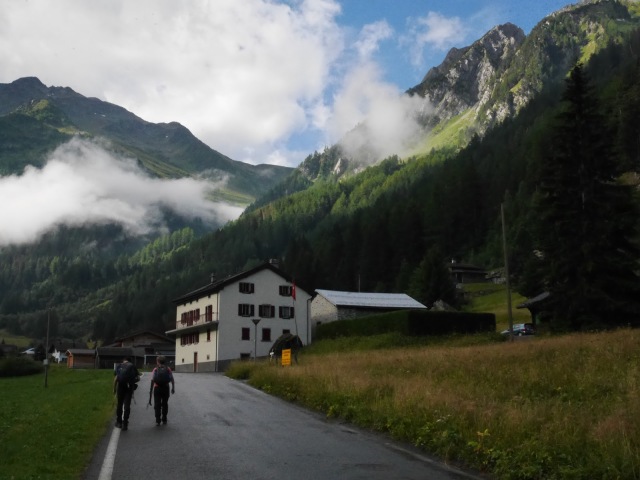 We loaded up the packs and headed out onto black and shiny roads. Long strands of cloud drifted low across the mountains and we put on gaiters against the wet grass we expected in the woods. Of course by the time we walked though Trient and into the woods, the sun was out and the clouds were burning off.

Trient marked the northern tip of the Mont Blanc range for us. Having been gently travelling north west, we turned on our heels and started walking south west. We could see the little notch we walked through yesterday. 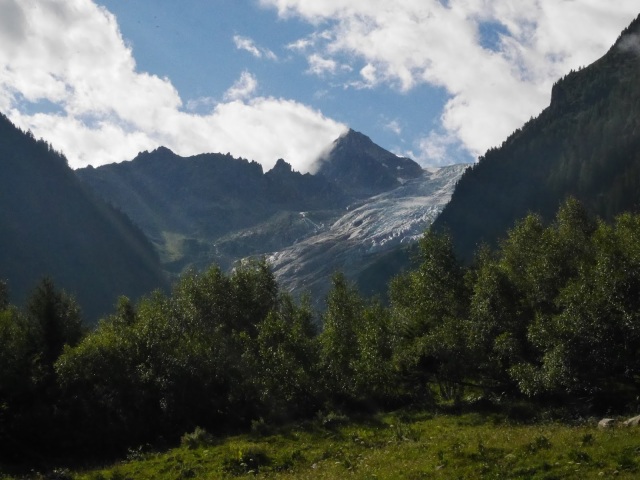 And then came perhaps the most boring stretch of the TMB. The guide had talked about “settling into the rhythm of the steady ascent” or some such. But actually that meant “now you will come to about 400 identical switchbacks flanked by trees so that no matter how many you do it doesn’t feel like you are making any progress at all”. Ooh it was boring. And hot. 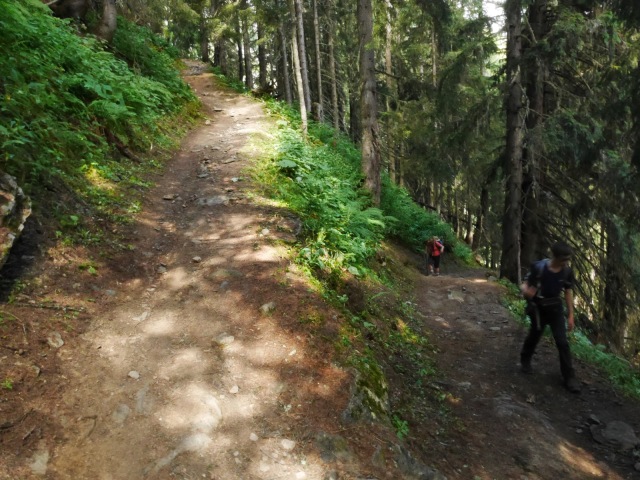 Just as we were beginning to wonder about those holidays where people lie on beach chairs and are brought drinks with umbrellas in them, we emerged through the trees at the upper valley. We could see right back down to Trient with its pink church. Far up ahead on the crest of the ridge, was the little refuge we were aiming for. 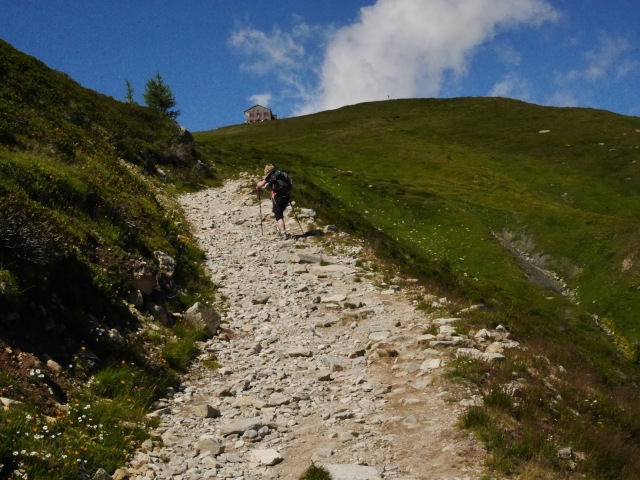 It was still a bit of a plod, over a rocky path, but at least we had a view.

We passed a cluster of ancient huts built into the mountainside with curved stone roofs. Signs on the doors said they were being restored. 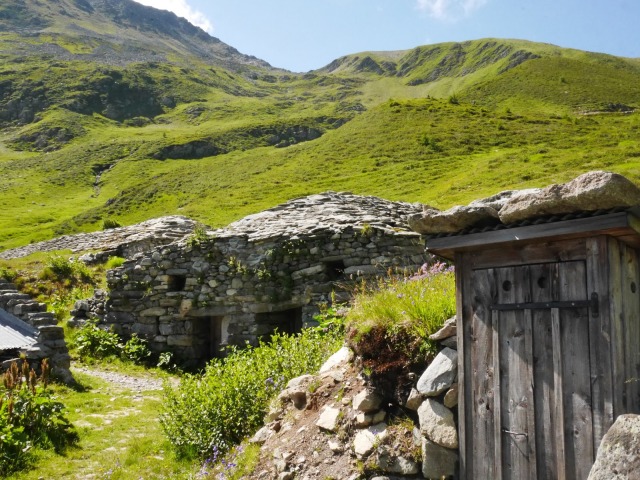 It was a lonely spot but with stunning views and had clearly been a fairly sophisticated farmstead that required a lot of indoor space. 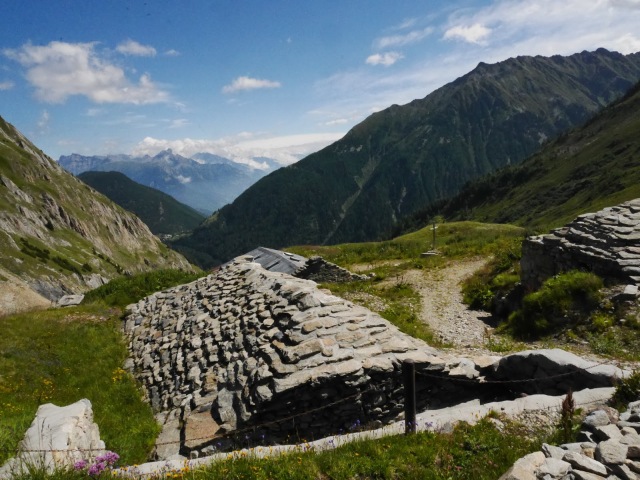 We pushed up into a stiff wind and as we got towards the top, Mont Blanc suddenly came back into view for the first time since we left Rifugio Bonatti.

Clouds built and dissolved across it to reveal its icing sugar snow dome gleaming in the sunshine with jagged black peaks around it. The refuge at the top of Coll de Balme was a welcome sight. It was a funny old place that hadn’t changed much since about the nineteen fifties.

A tiny, wizened lady took our orders from behind a beaten-up wooden counter. On the walls were ancient racks of super-sized photos for sale (not postcards) that had clearly been taken decades ago. 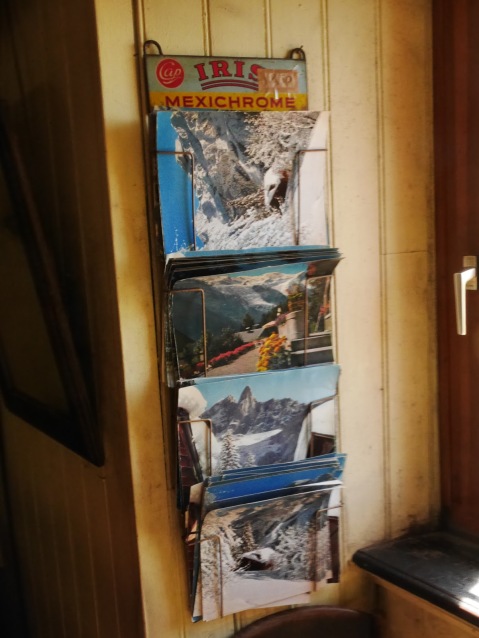 We were hungry after the long climb and ordered steak and chips (and an omelette) and panaches and myrtle-berry tarts and coffee and sat outside in the sunshine to eat it. It was my best refuge lunch I think, sitting in the lee of the wind against the warm stone wall of the building, watching the clouds dance slowly across the face of Mont Blanc.

We left Switzerland and walked into France.

The way down was along a sharp grassy ridge which gave us fantastic views down into the Chamonix valley.

We could see Argentiere far below us and beyond that Chamonix itself where we will spend our last nights of this trip. It brought home just how close we are to the end of our walk. We walked under ski lift pylons and past piste markers on poles. The landscape felt much more managed than the places we have been over the past few days but the view over to the big beasts of the Mont Blanc range was exceptional.

Across the valley the gush of glacial water kept up a constant roar and larks tweetled high overhead. It was a long, long plod downhill in the heat, with many games of “twenty questions” to keep us going. 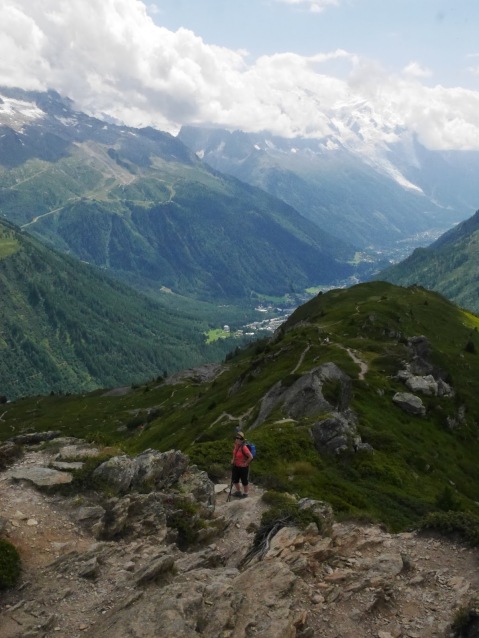 We eventually popped out on a main road with traffic whizzing by and a sign saying it was another twenty minutes down to the hamlet of Tre le Champ. We walked down the old road – now a gravel track – to the old buildings of the hamlet.

One of them is a beautiful Auberge where we stopped for a cold drink in the shade. The wooden tables were all set neatly for dinner and it felt so perfect. It was also just a couple of minutes downhill from where the route takes us tomorrow, and our hotel was another mile and a half downhill at the other side of Argentiere. After our long day I played briefly with the idea of just ditching the reservation and staying at the Auberge but we drank up and pressed on.

The old part of Argentiere is really delightful; narrow lanes through pretty wooden houses. We went through, and out the other side towards the cable car station. Then beyond that, through the RV parking area. Despite our love of all things motorhome, we were beginning to feel like we’d been taken for a ride with this reservation. Not only were we a mile and a half downhill from our route, we were not in pretty Argentiere either. P and I grumbled as we trudged up to the fairly nondescript chalet style building where we would be staying the night. But inside…ah, inside… It was all mood lighting and low wood beams and stone floors; an antique sleigh here and a historic wooden truckle bed there. And at reception “Your bag is in your room and here is your key which will let you into the pool area. Breakfast is until 10 and please let me know where I can book dinner for you”. And big smiles all around. Our room, though decorated like a Victorian bordello, was cosy and comfortable and T had his own mezzanine upstairs. Oh it was nice.

As was supper at a restaurant called 214 back in the heart of Argentiere. We sat outside until the long-promised thunder finally rolled in and everyone scuttled inside as rain began to fall in rods. The owner/maitre’d/waitress was slightly stand-offish with us at first as though she was fed up with our bad French and our questions about wine options she didn’t have. But the food was terrific. Everything served with originality and flair. After the meal she chatted with us a bit and was clearly worried about the lack of passing trade at the moment. “Usually at this time of year we are busy but now we are saying ‘perhaps next weekend will be good’ and it never is.” A shrug and a half smile. I wonder whether the fall in the pound after the Brexit vote is keeping British hikers away. I wonder how all these mountain border crossings are going to work in a couple of years time…

We walked back to the hotel through dark wet streets, fell into our beds and slept like the dead.