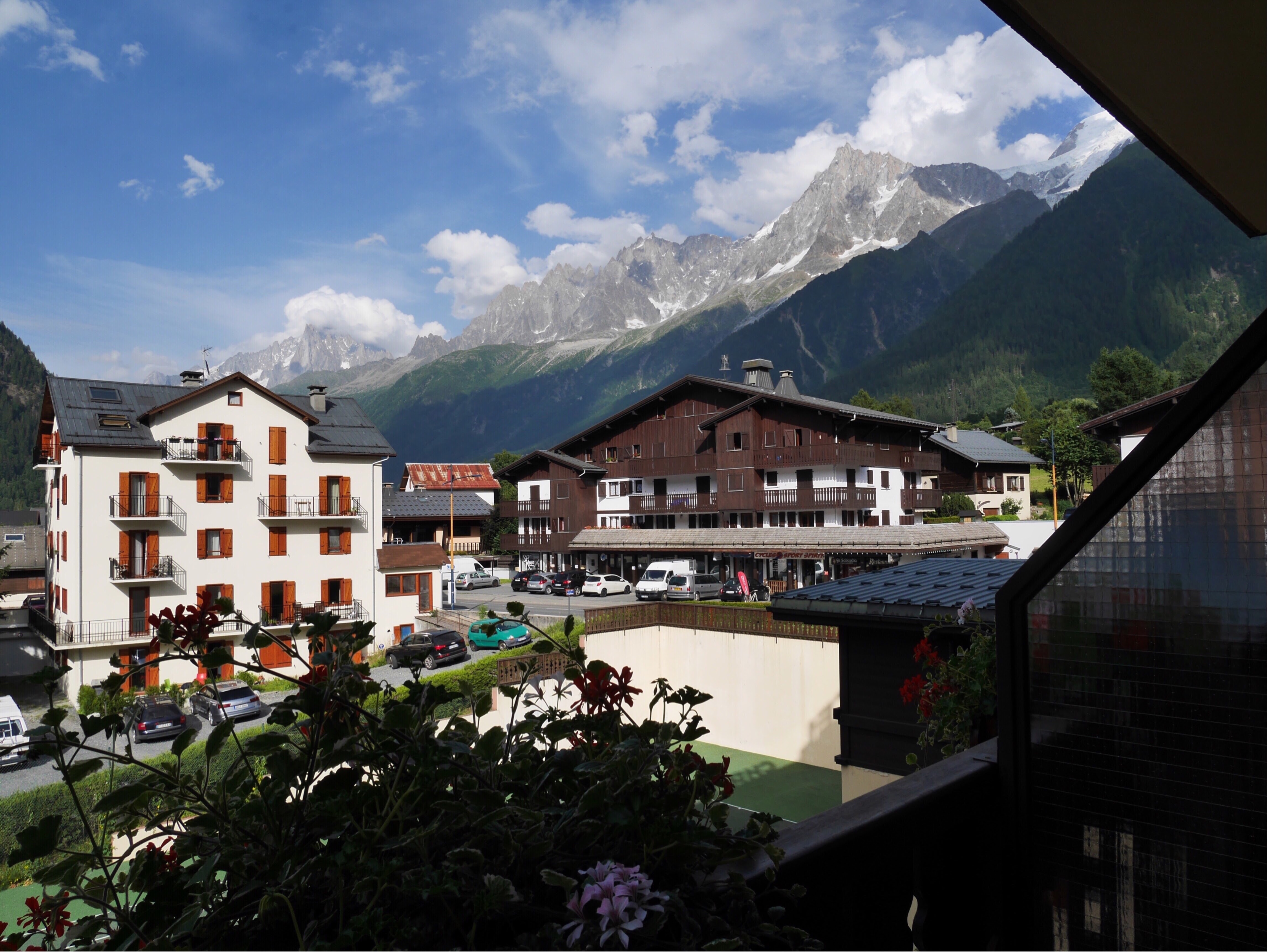 Right, this is it then. There will be no sloping off to a bijou coffee shop, or deciding that actually maybe its a day for reading a book. Today we set off to walk around Mont Blanc, regardless of weather, weariness or wifi availability. There has been something of a questionmark over Philippa’s foot which she injured training for this walk (!) but after much strapping and a copious quantity of drugs, we are hoping she will not notice it. Or possibly given all the drugs, anything at all. Les Houches is the traditional starting point for the TMB and should, I feel, have some sort of starting line emblazoned on the pavement along the lines of “TMB KM1” or “Abandon hope all ye who enter here”. But in fact the start to the TMB is an altogether more workaday affair along the pavement through Les Houches. A roadsign points out helpfully that our end point, Chamonix, is just a few K in the other direction. We could be there in an hour or so rather than the two weeks its actually going to take us. 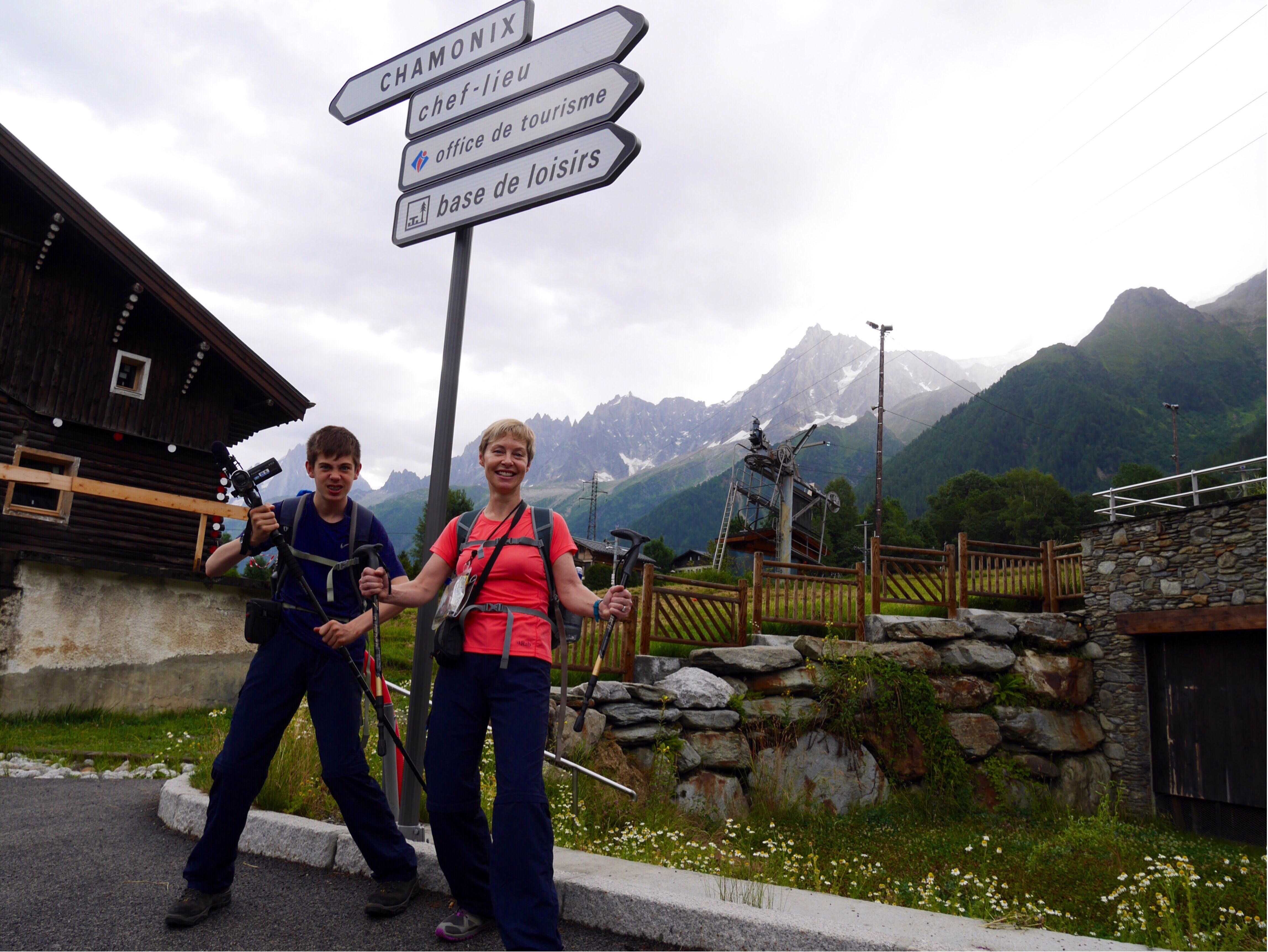 It’s a quiet Sunday morning with one or two other hikers peeling out of hotels, adjusting backpack straps and checking water bottles. I had expected more people but its is mostly just the three of us. The route suddenly turns left up steep log steps in a grassy hillside. We follow and sometimes cross a small residential road zig-zagging up the hillside with us, through houses and chalets looking down into the valley. 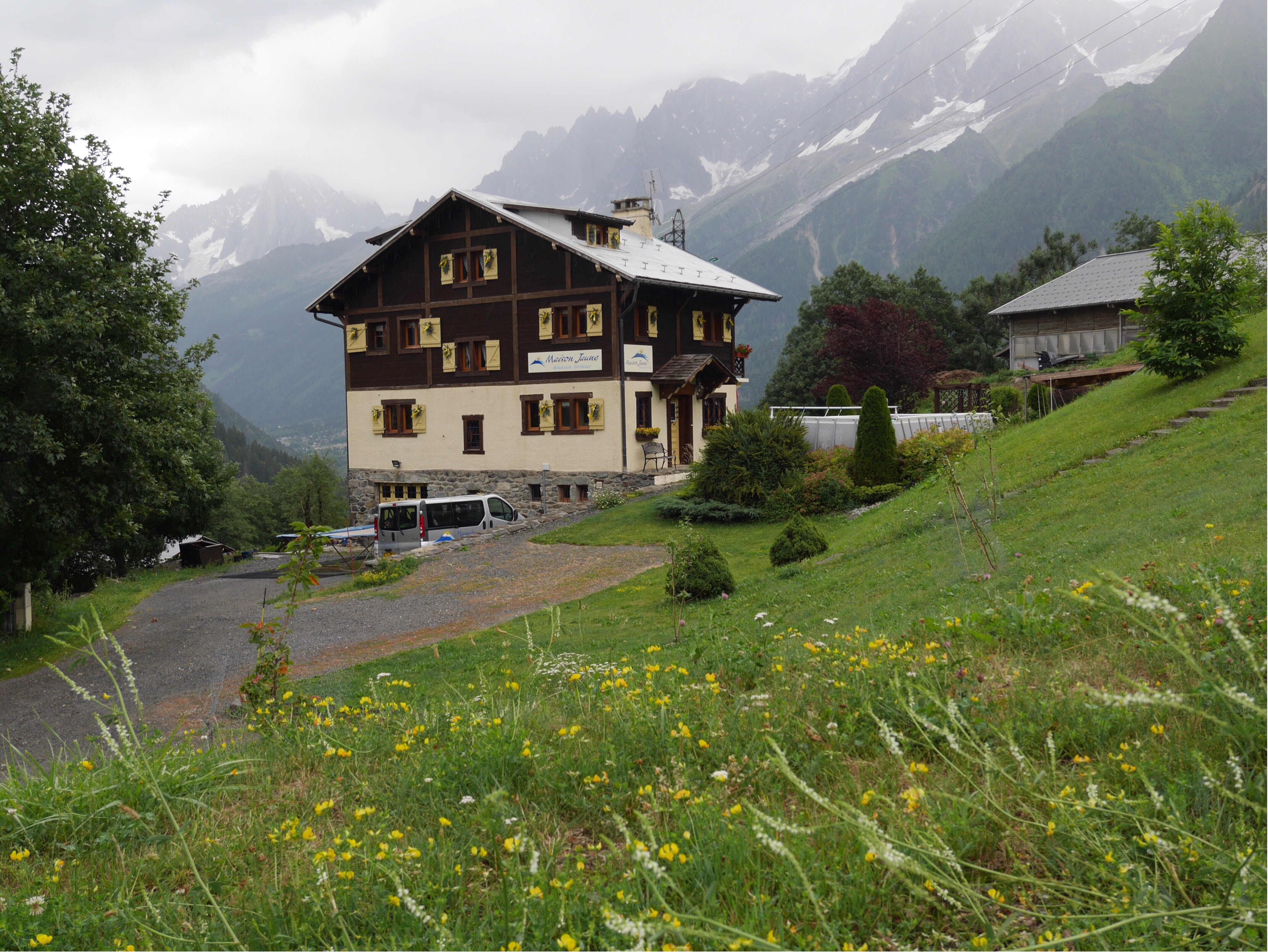 It’s not exactly raining, but it’s not exactly dry either. At least its not the thunderstorms promised last night. No yet anyway. We are following signs for Col de Voges, which would be the highest point on today’s route, if we weren’t intent on doing a variant from there taking us up and over the Col du Tricot which adds another 350M of ascent to the day. The walk to Col de Voza is a stony track for the most part, with the occasional suicidal mountain biker hammering down it at speeds which would be impossible to do anything about even if they wanted to. The view down the valley would be prettier on a clear day and for the most part it is a fairly grinding uphill trudge with little to see. I keep thinking that the ACTUAL tour Mont Blanc has yet to start. Finally we pop out at Col de Voges,, which turns out to be a stop on the Mont Blanc tramway which has been running since 1913. 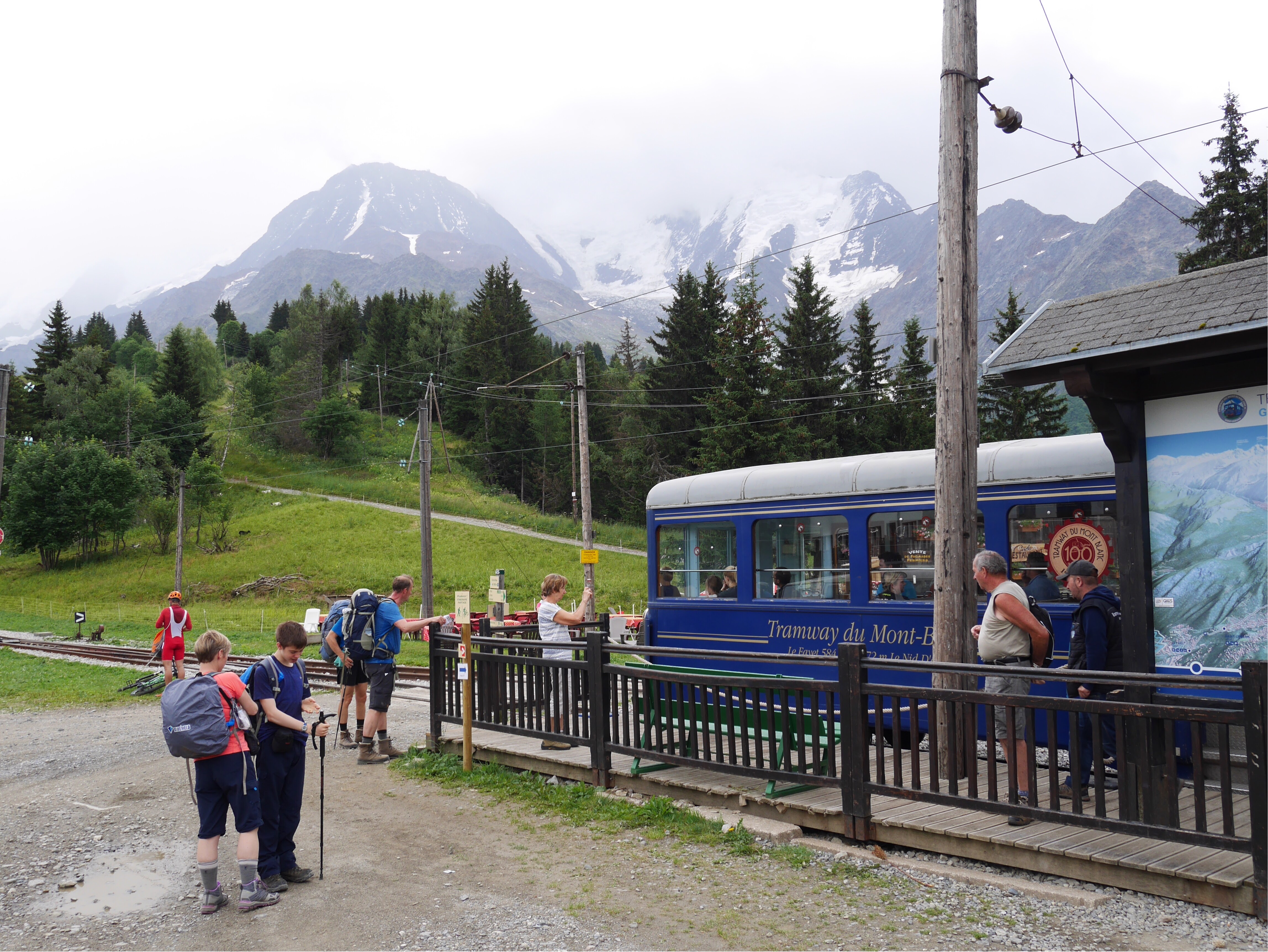 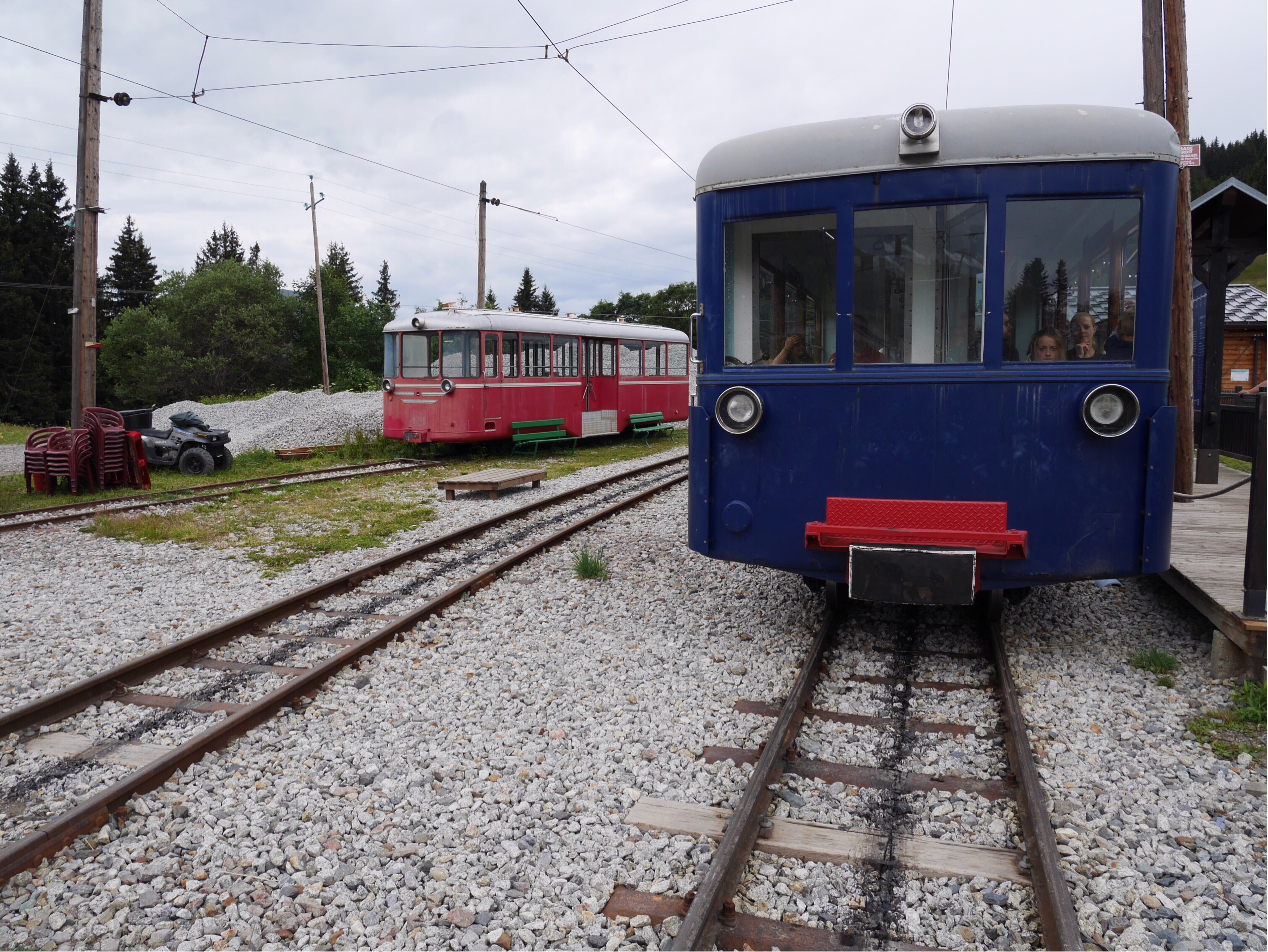 Its a good place to stop for perhaps an early lunch at the cafe in a wooden chalet surrounded by wildflowers. But we are too early. No food until noon Monsieur and it is only 1130. And our hot chocolate machine is broken Monsieur and we are unable to bring you hot milk for your coffee! It was all fine and just the drinks pause we needed to recharge a little before the Col de Tricot.

So, up along the tramway and then through a meadow and some woods, with grassy banks nodding with wildflowers and flickering with butterflies. But finally we came to the point that Philippa had been Not Looking Forward To all day. The Himalayan suspension bridge. 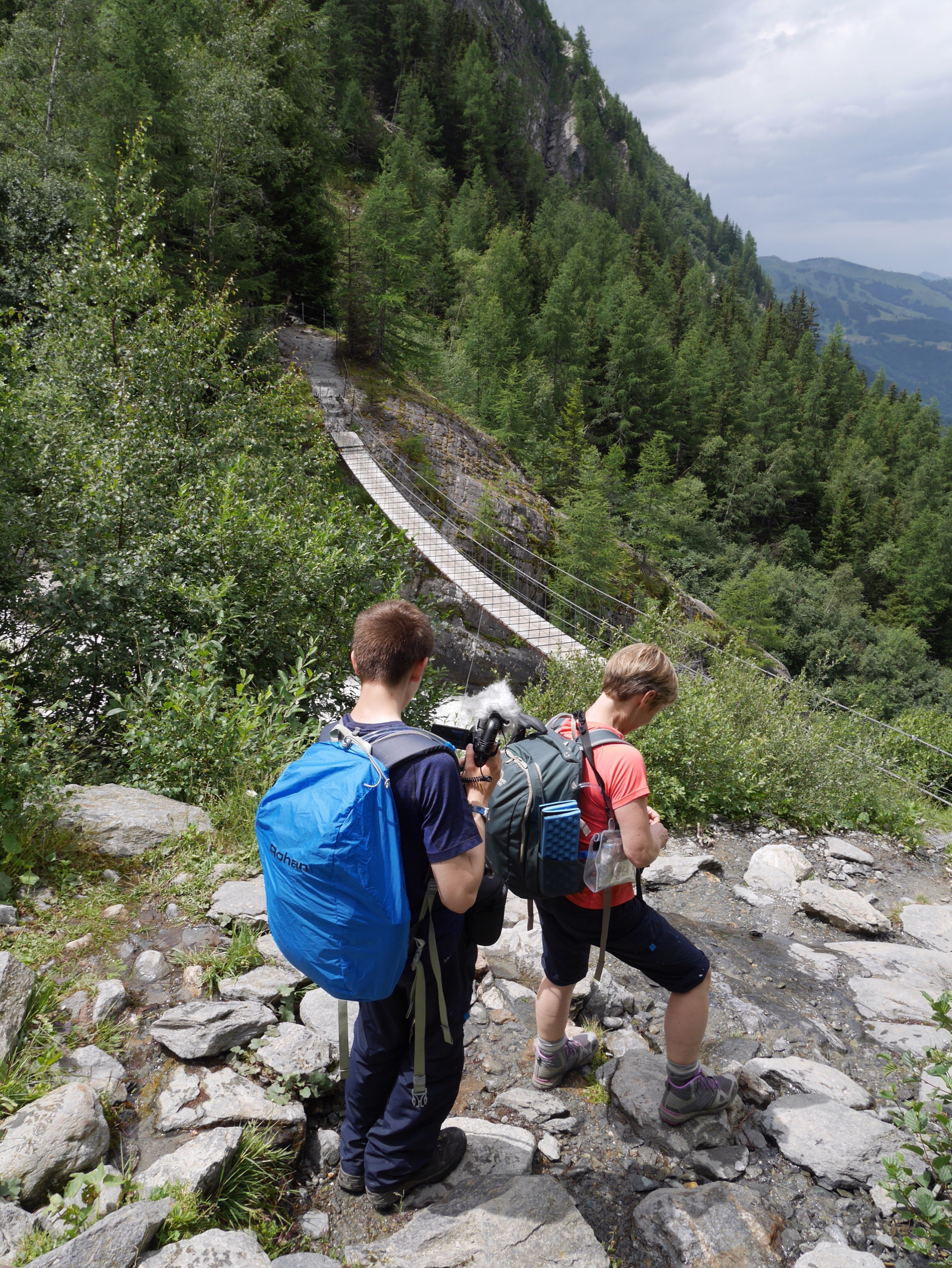 It sways over a rushing river we could hear for an hour before we reached it; a churning torrent of glacier meltwater pounding down on one side of the bridge before falling away down a steep slope on the other. P and I went first step, by step and then Tom followed, filming everything with no hands on the handrails. 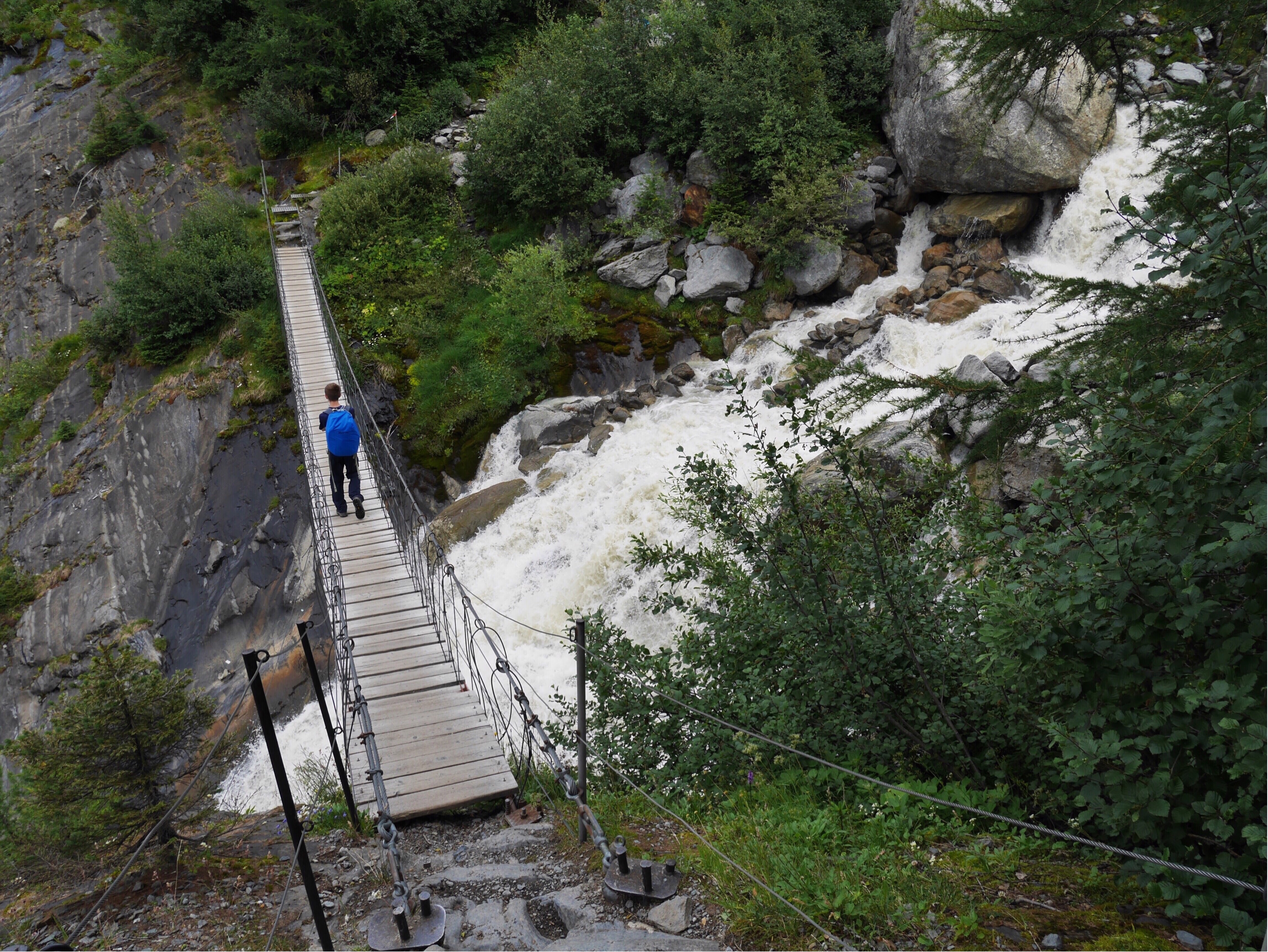 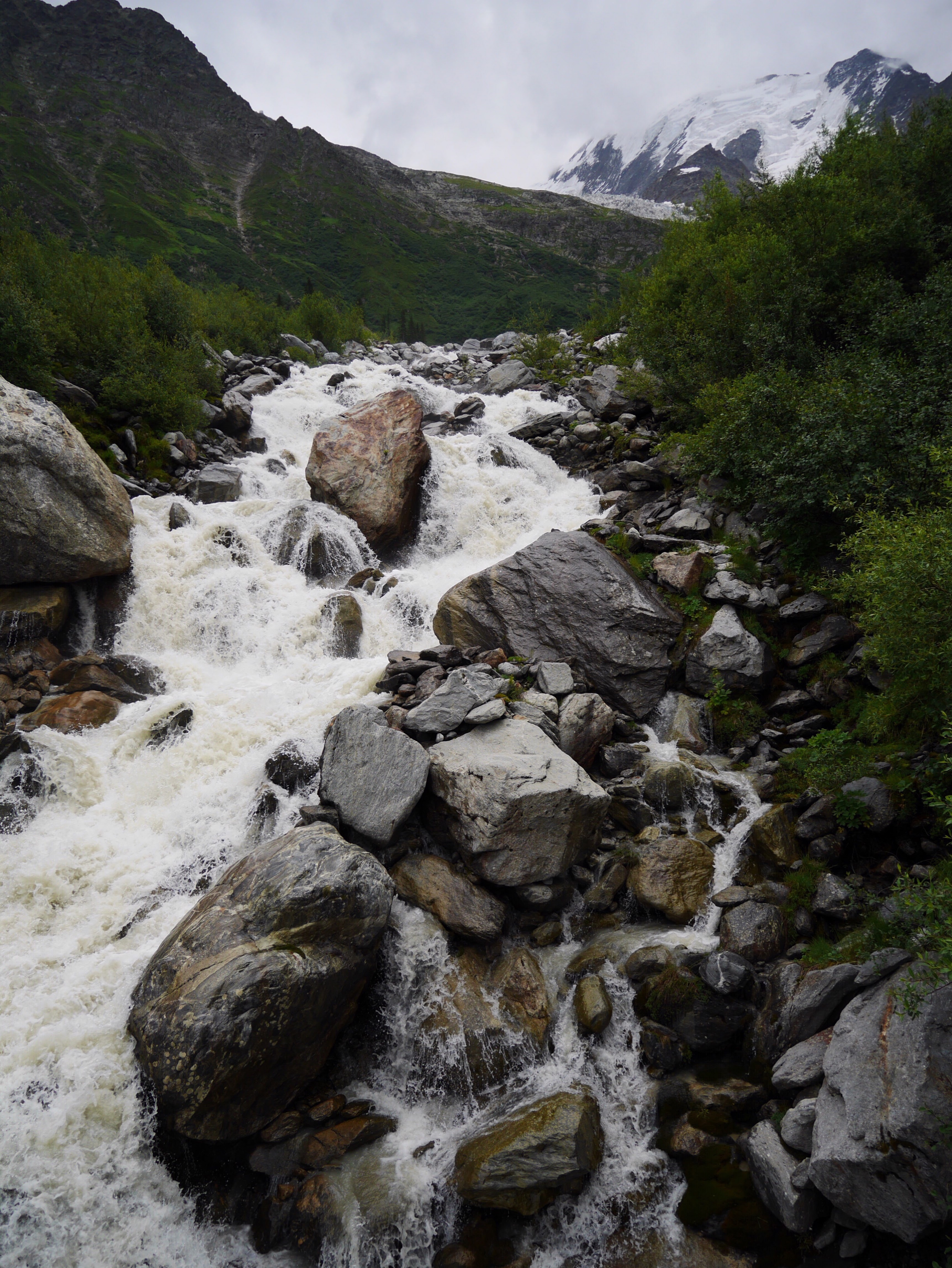 At the other side the rain began to fall and continued pretty much all the way up to the col. It was a pretty walk though, through meadows full of flowers along slippery clay paths. Tom bounded ahead and was first to reach the Col de Tricot. 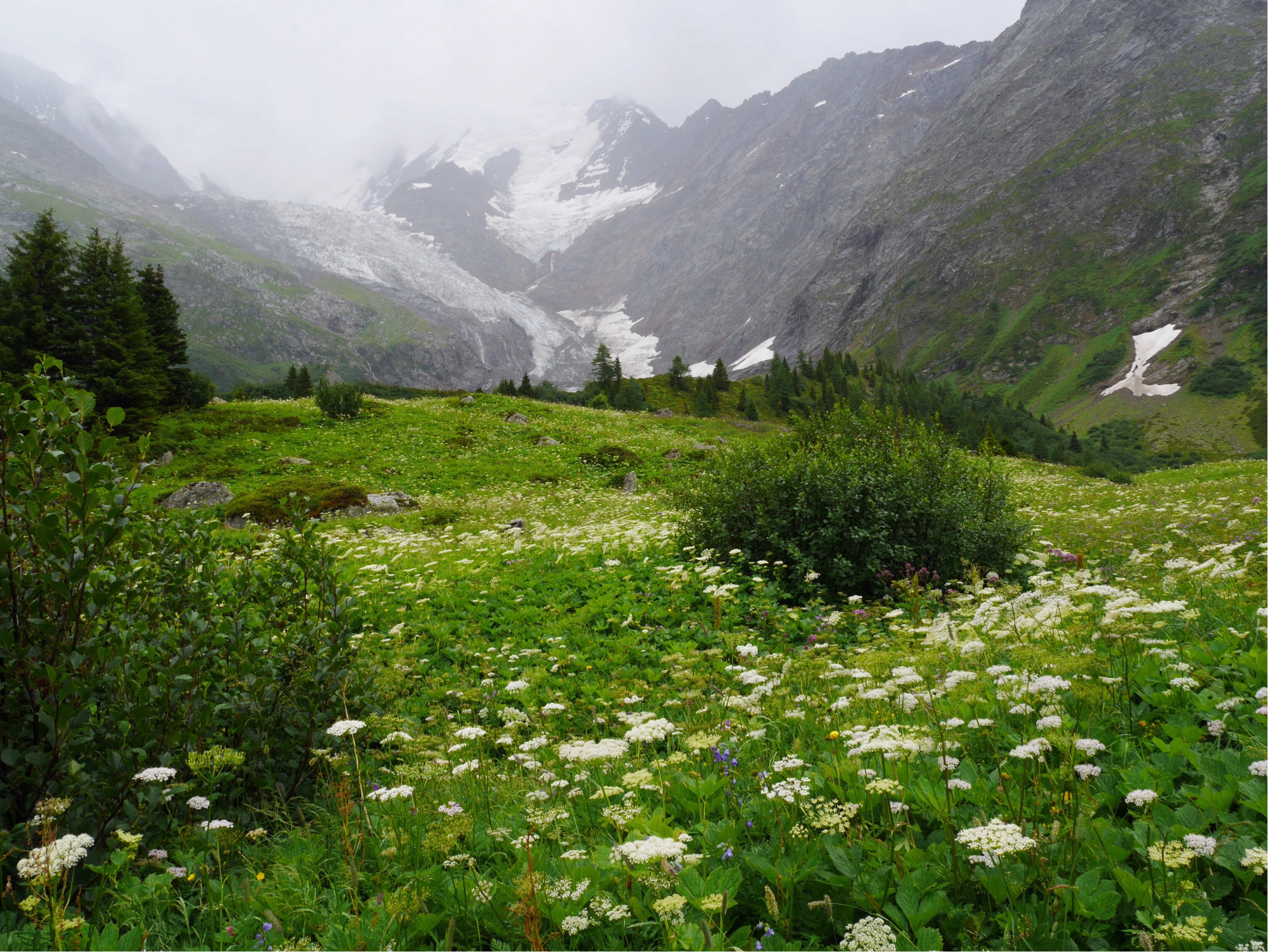 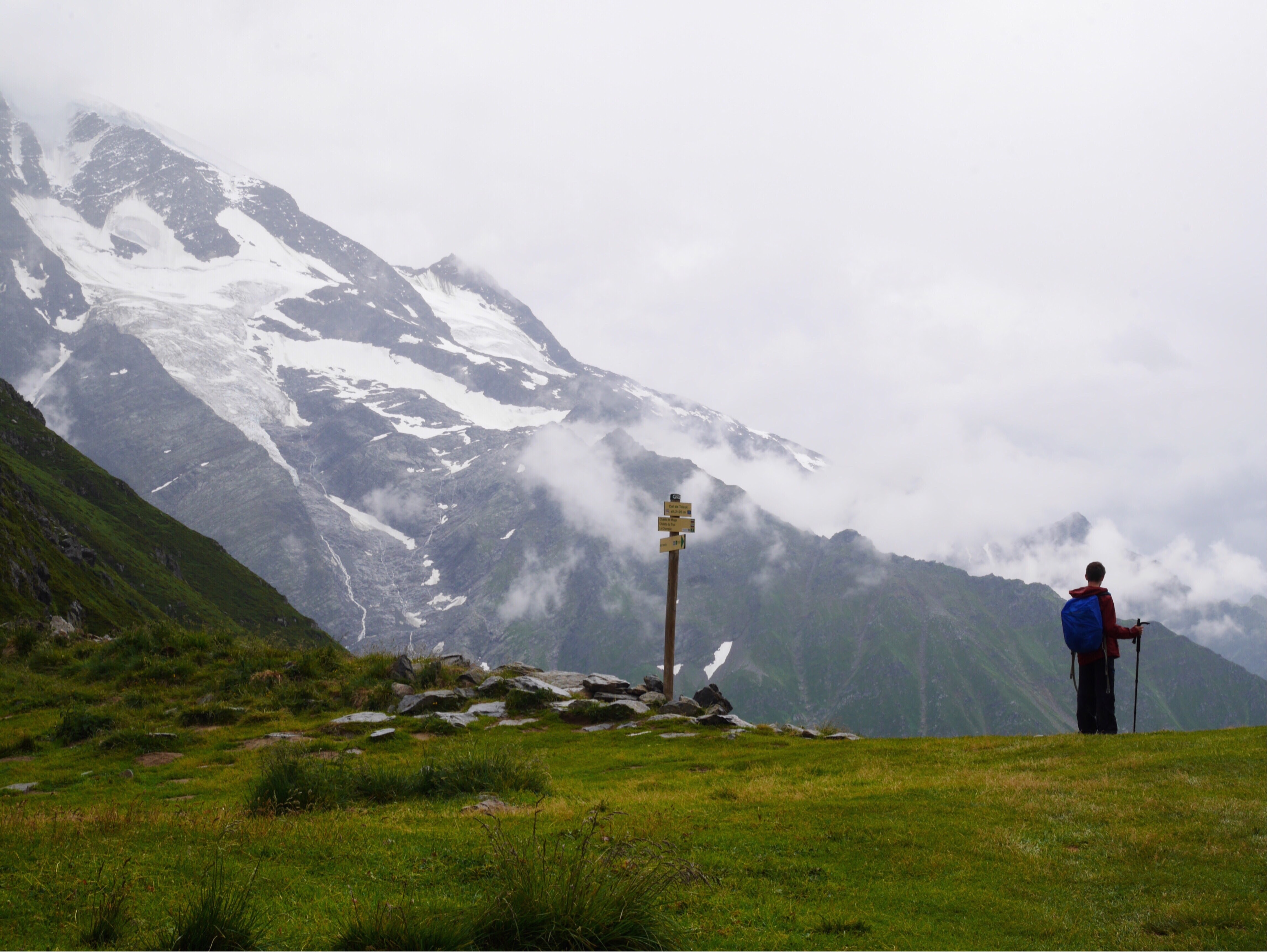 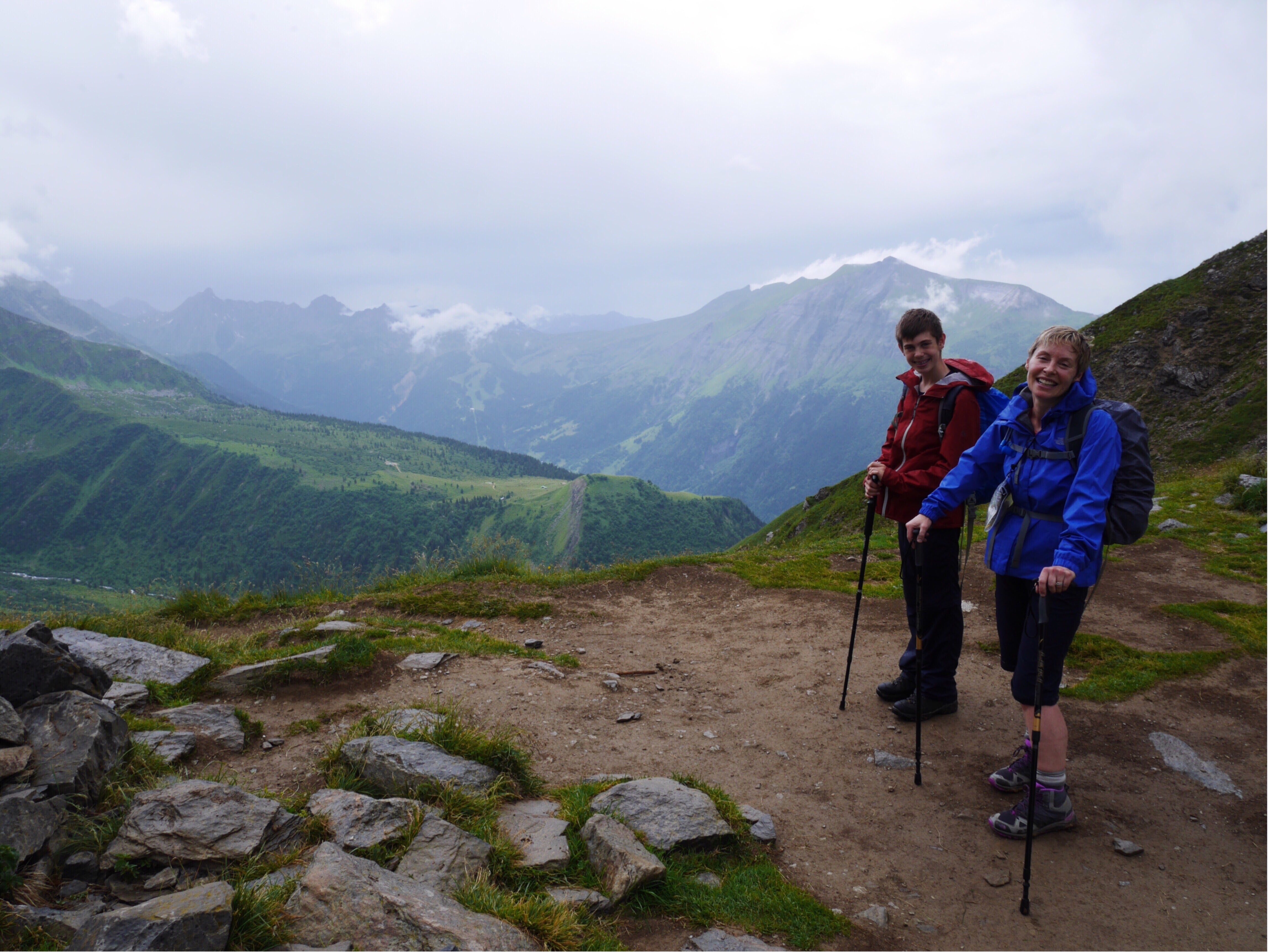 Yup, it was exhausting getting there but the view down into the hanging valley below was wonderful and well worth all the effort. 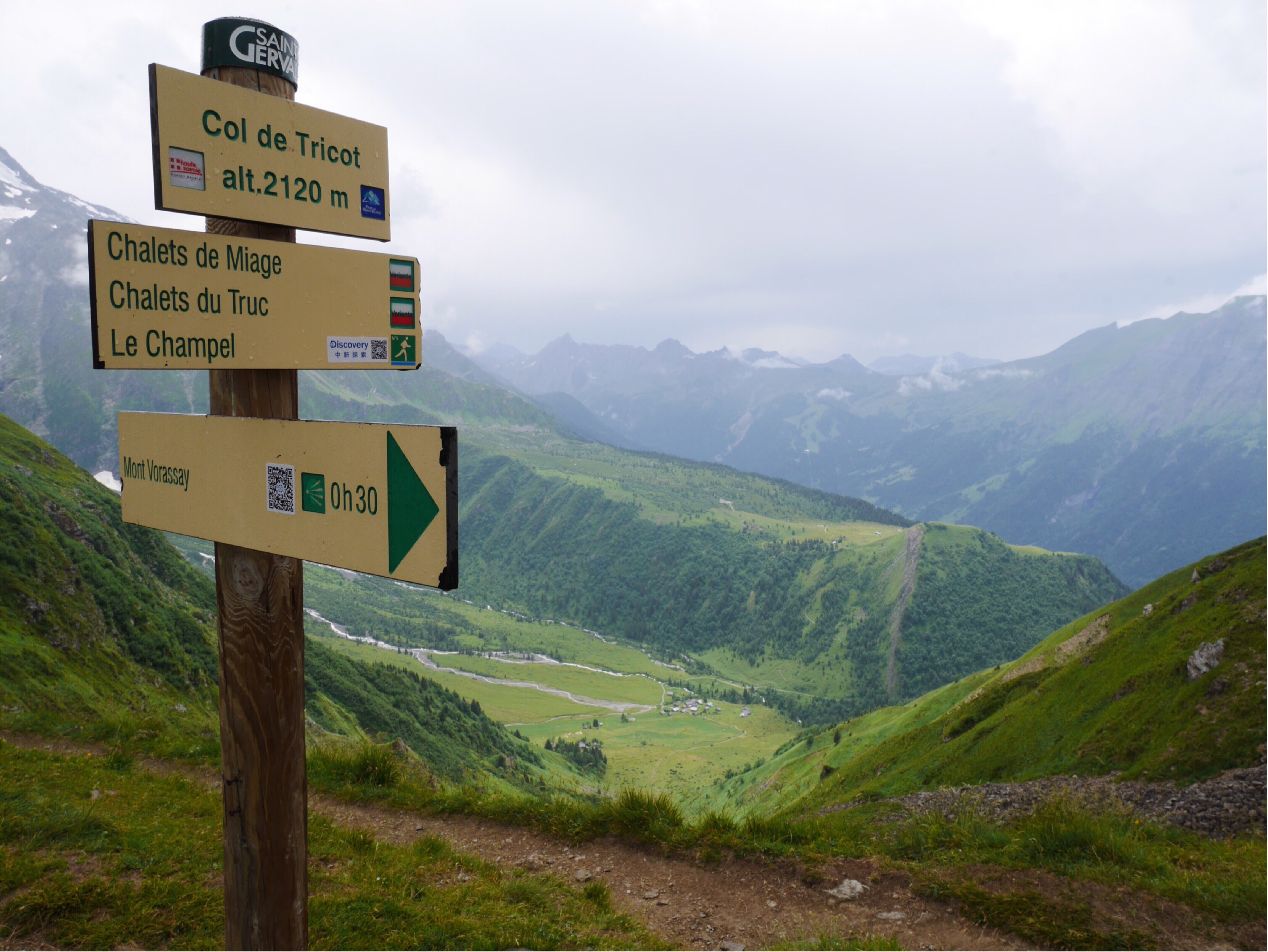 We set off down towards the Chalets de Miage in the valley below, just as the sky began to darken. 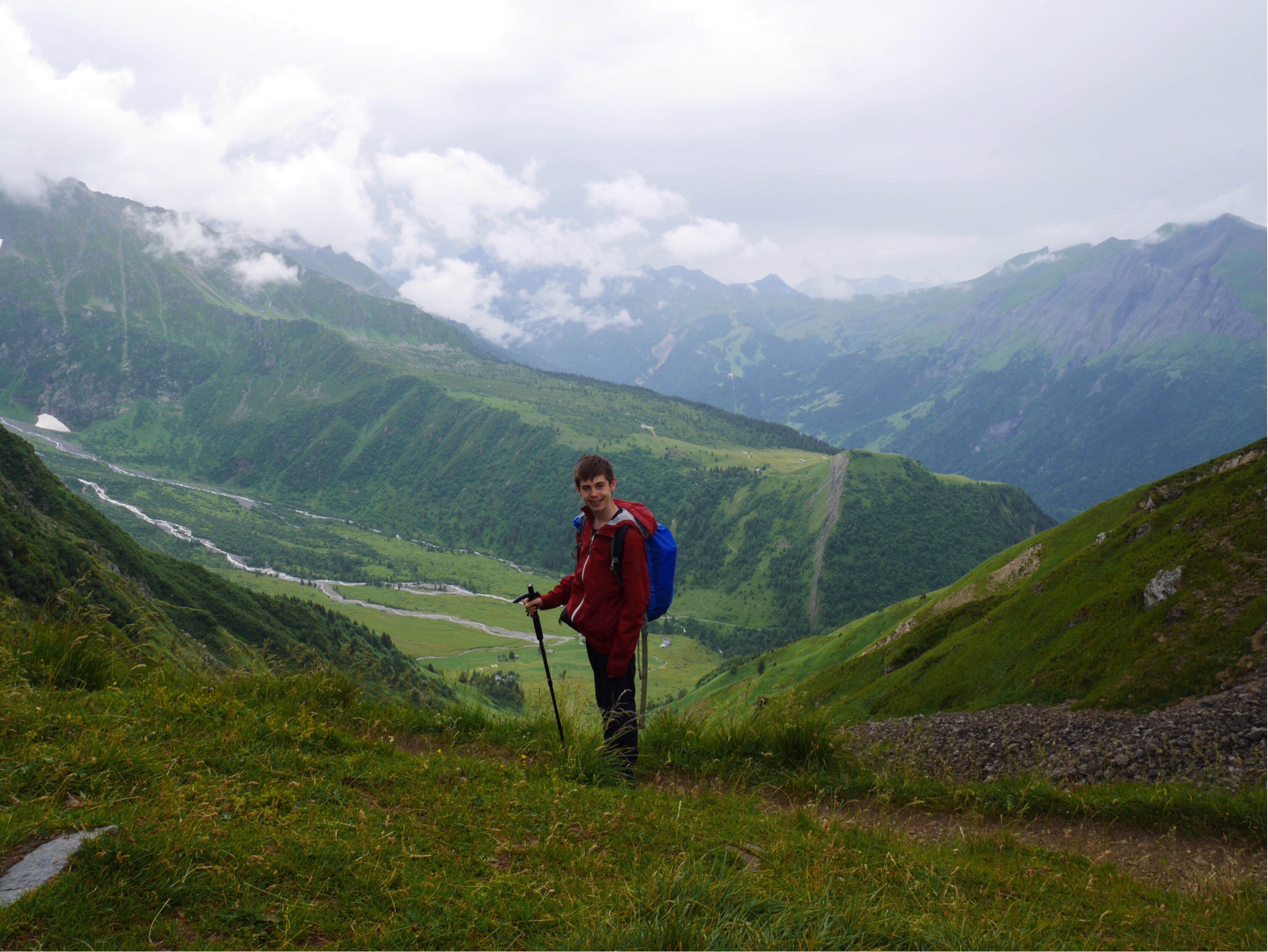 Thunderclaps rolled around us and the rain began to hammer down as we struggled for grip on the steep slope. There were some on the path who were clearly enjoying the rain though. 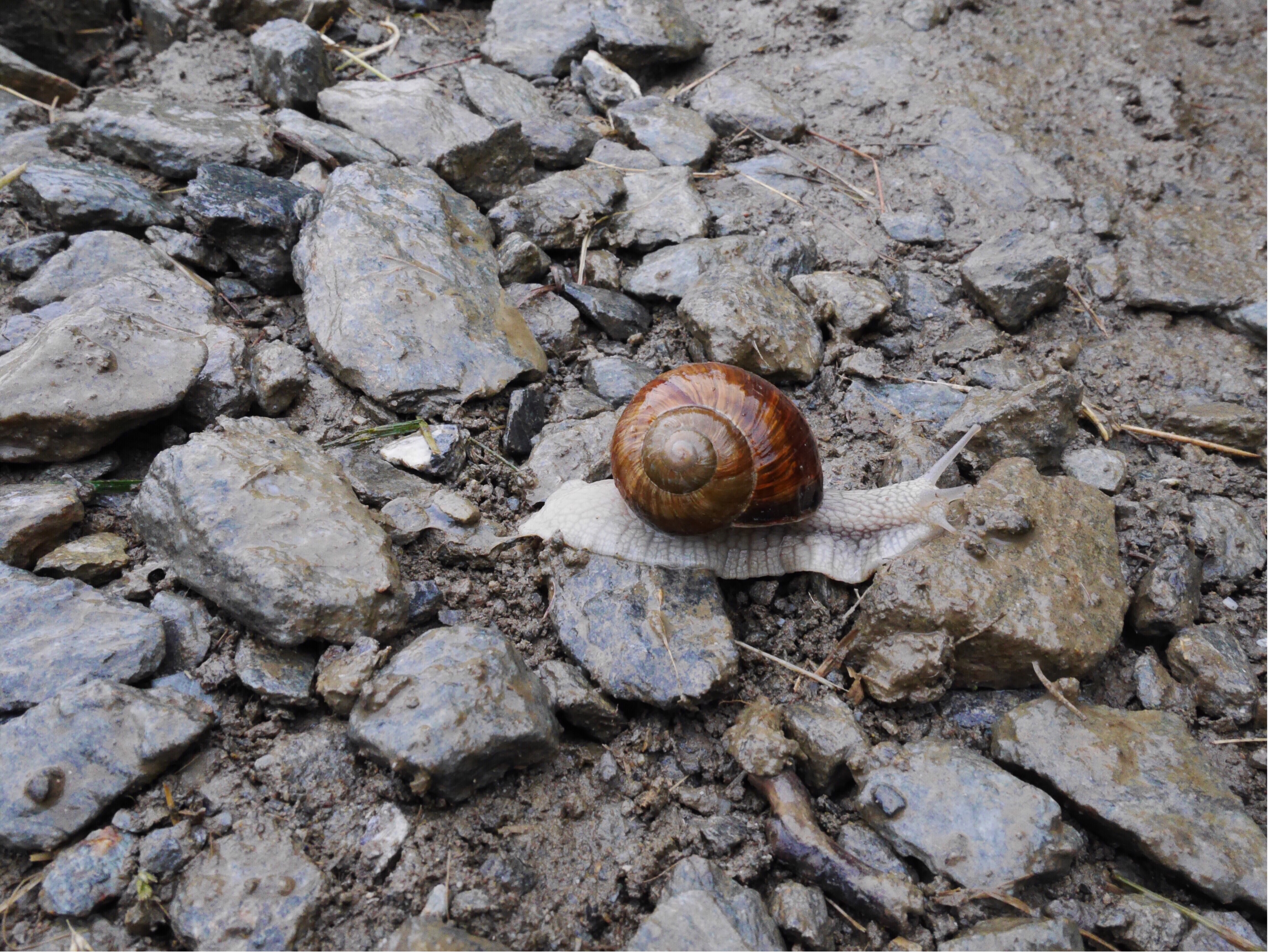 We were deeply grateful for having proper waterproof gear for our selves and our packs, though we resisted putting on the waterproof trousers until the last possible moment, at which point the rain stopped and the sun came out and the whole vista was transformed again. 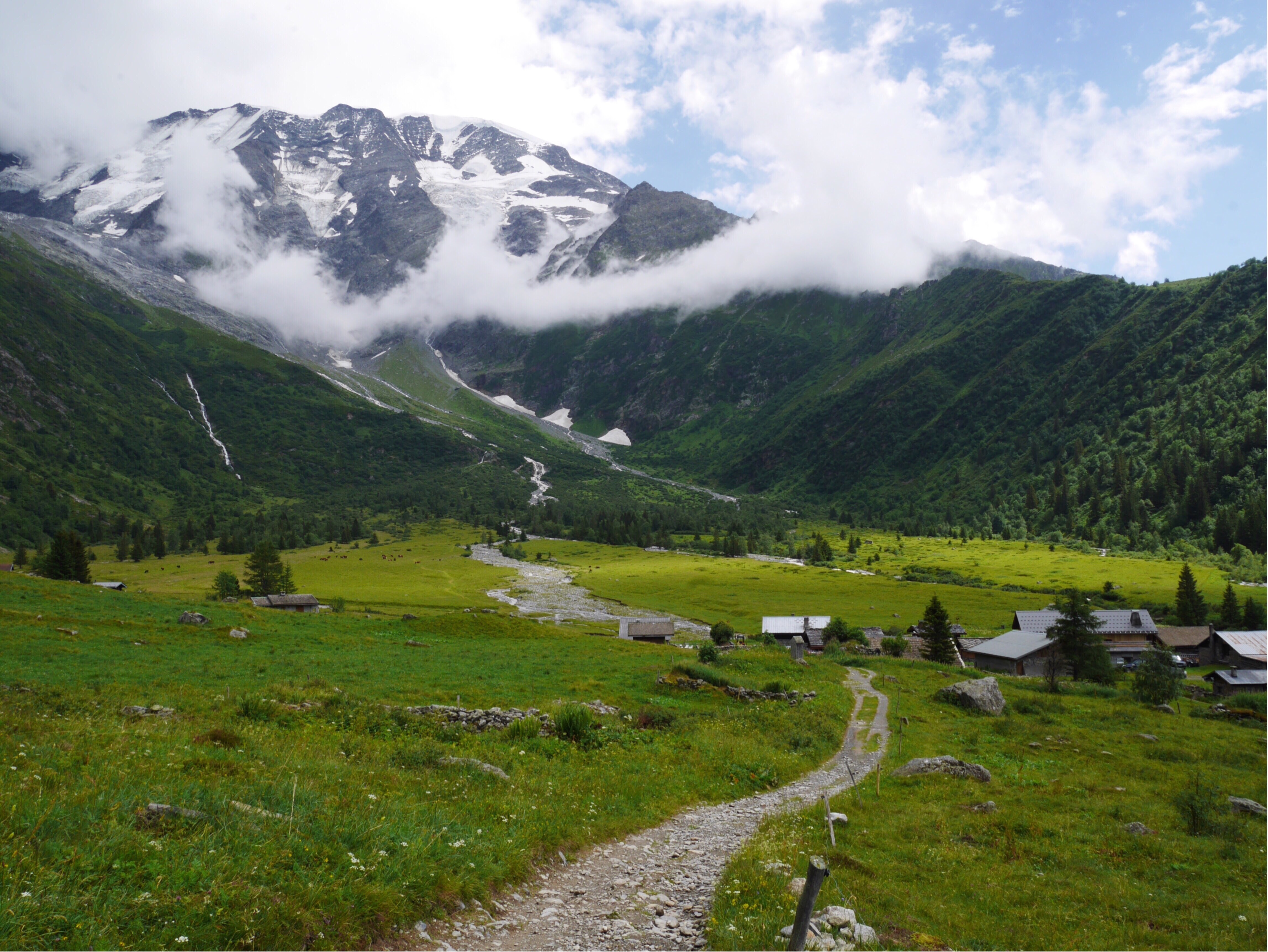 At the refuge in the valley we dried out in the sunshine while some of us shared a cheese sandwich and others had two scoops of icecream. Cows tonkeled distantly and a river rushed by the garden and birds tweetled and we could have stayed the night to be honest. 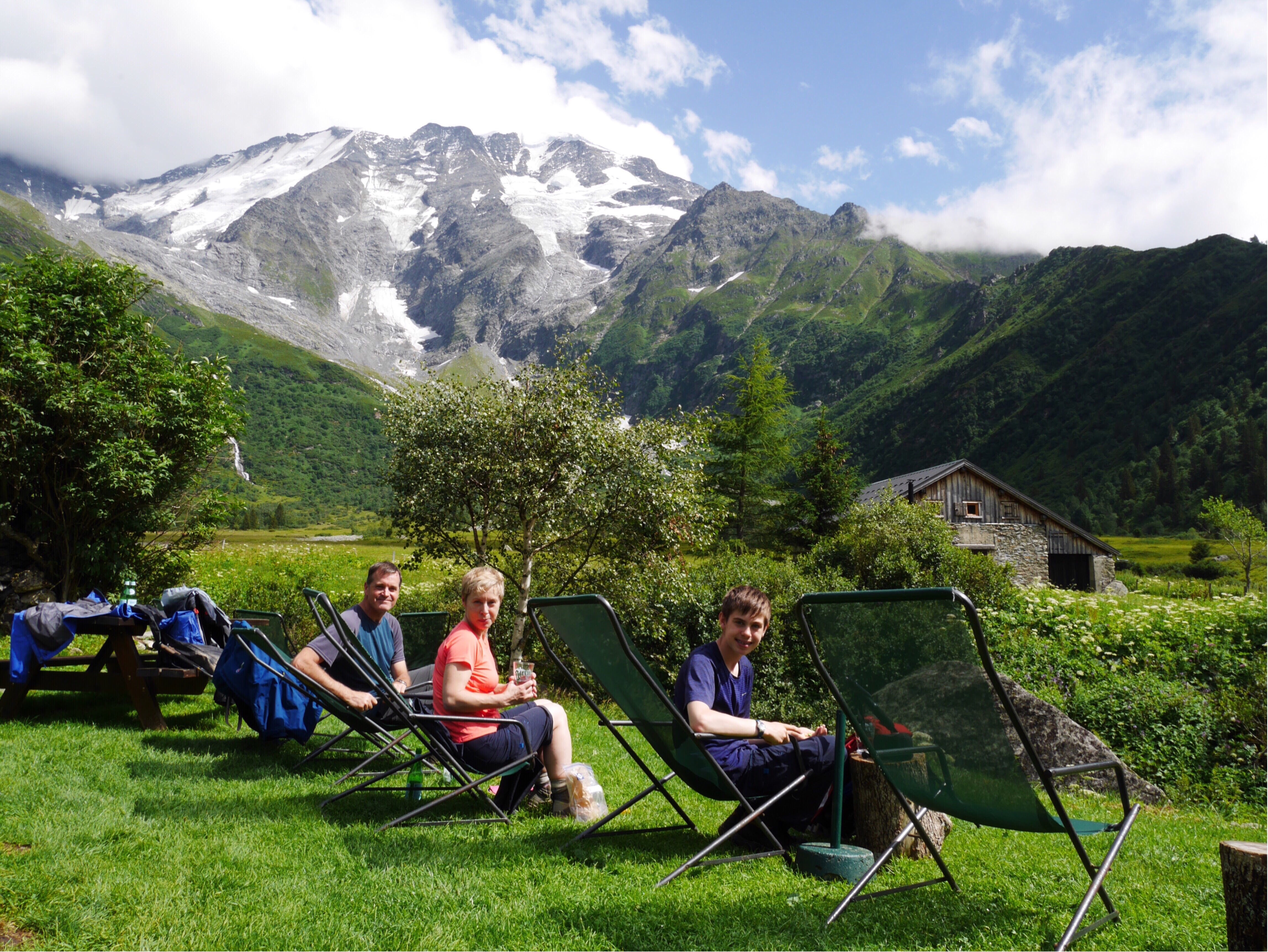 But we still had a bit more up and down to do… Up and over the wooded ridge in the photo above which was one long, steep climb with knees and hips (and a foot) all beginning to protest. Though not if you are fourteen obviously. Then, you appear to barely notice it. From the top it was a steep descent pretty much straight down a gravel road, and I made the mistake of following the signs for Les Contamines, rather than checking on the route we actually needed, which split away to the far south of the town. I only noticed after five minutes more of steep downhill, which meant another fifteen minutes of really steep uphill to rejoin our route. We got to the hotel at about 7.30 after having hiked for almost ten hours, climbed almost 4,800 feet and back down almost 4,000. Tomorow, we are putting our feet up before day 2 of the TMB 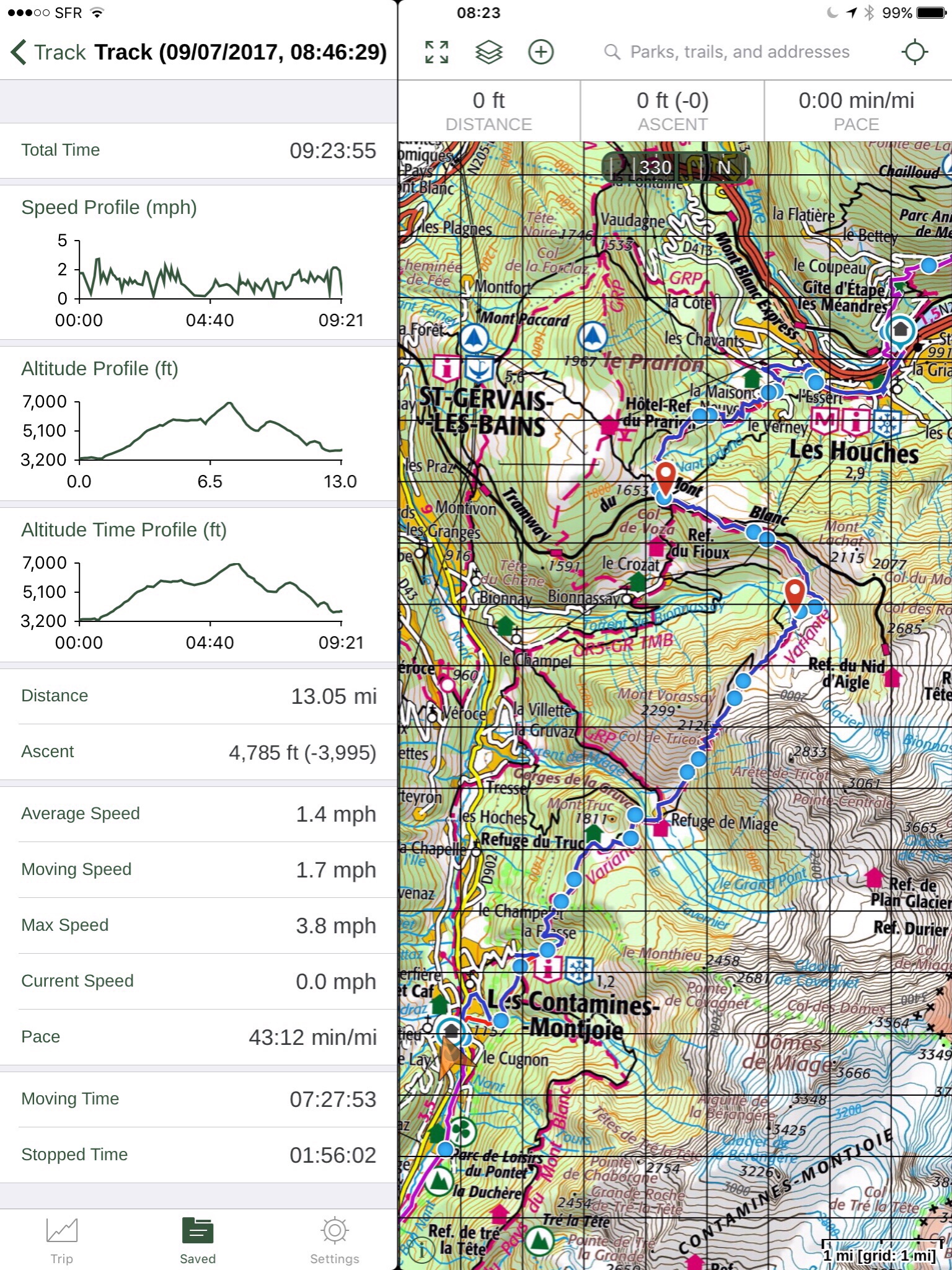