By Richard ListerJuly 17, 2017
The guide says this is the toughest and most spectacular stage of the TMB and having just finished it, I think that’s probably about right. It’s not the longest in terms of distance, nor does it have the greatest altitude gain. But my knees are telling me this was a hard day, and some of the views we saw today were utterly spectacular.

We got up early this morning and were first into breakfast at the hotel. The team of waiters were eagerly waiting for us as usual. At least they looked eager… It is a very old fashioned sort of dining room, with many be-jacketed flunkies and everything just so. When they brought us drinks they were careful to turn the cup handles to the right position in the saucers. Our table was right next to a vast window looking out on the mountains we’d climbed down from and there was much cereal, and many dried fruits, and fresh rolls with curls of butter and tiny jam pots on a revolving server and fresh cheeses to cut and glass jars of yoghurt and flaky croissants and cappuccinos and hot chocolate like a dark night in a mug. It was all good. 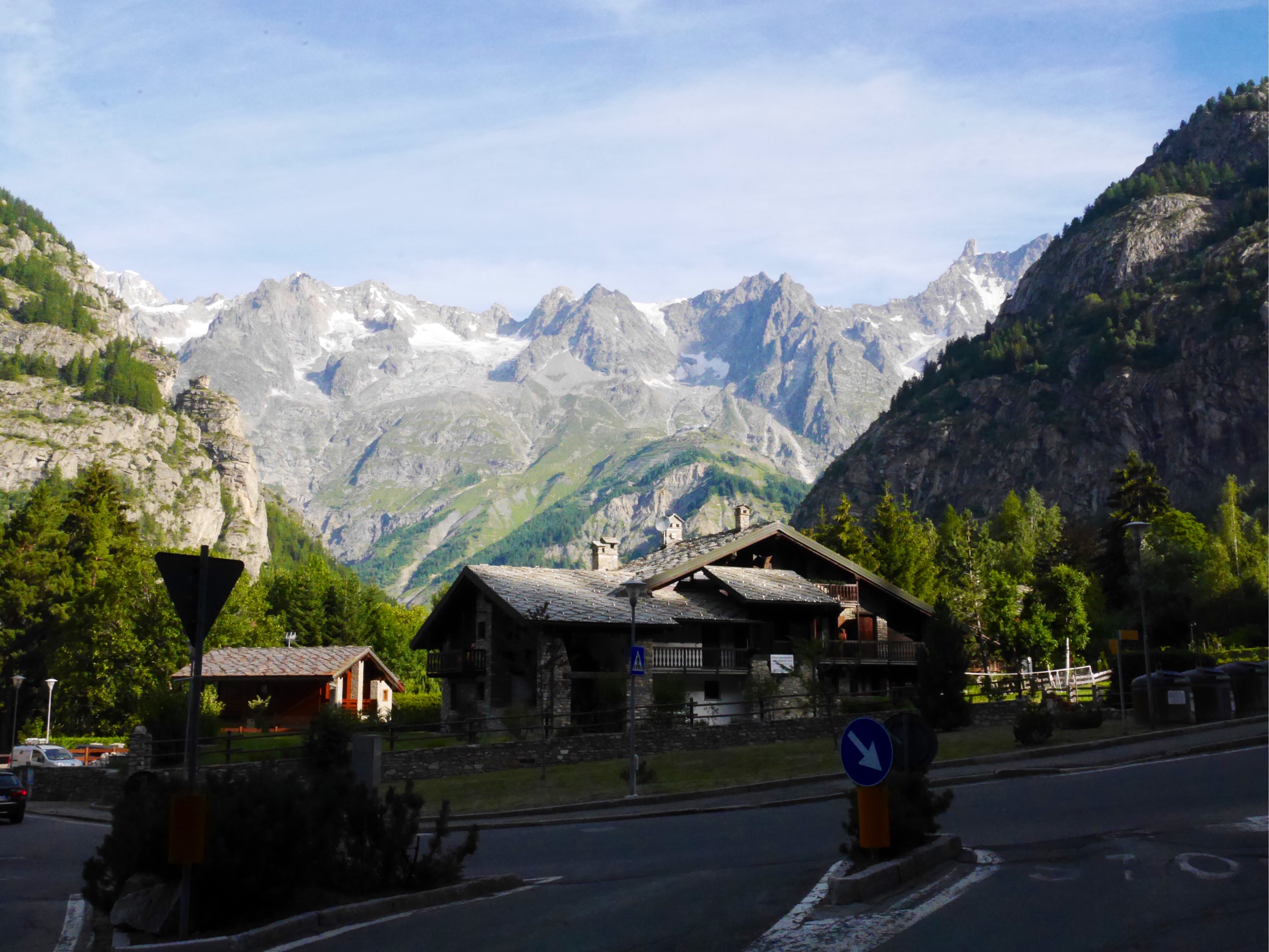 We were on the road by 8.30 relishing the cool morning air and a mountain town beginning to sort itself out for the day. We walked through the new bit of town, and then the older bit by the church and past the grand wooden chalet that is the headquarters of the mountain guides’ association. The road narrowed and took us into an even older bit of Courmayeur; smaller, plainer buildings of stone and with ironwork across the windows. Beside the road, a stone water trough lined with wooden planks for beating washing. I wish I’d taken a photo, but I didn’t so you will have to take my word for it. 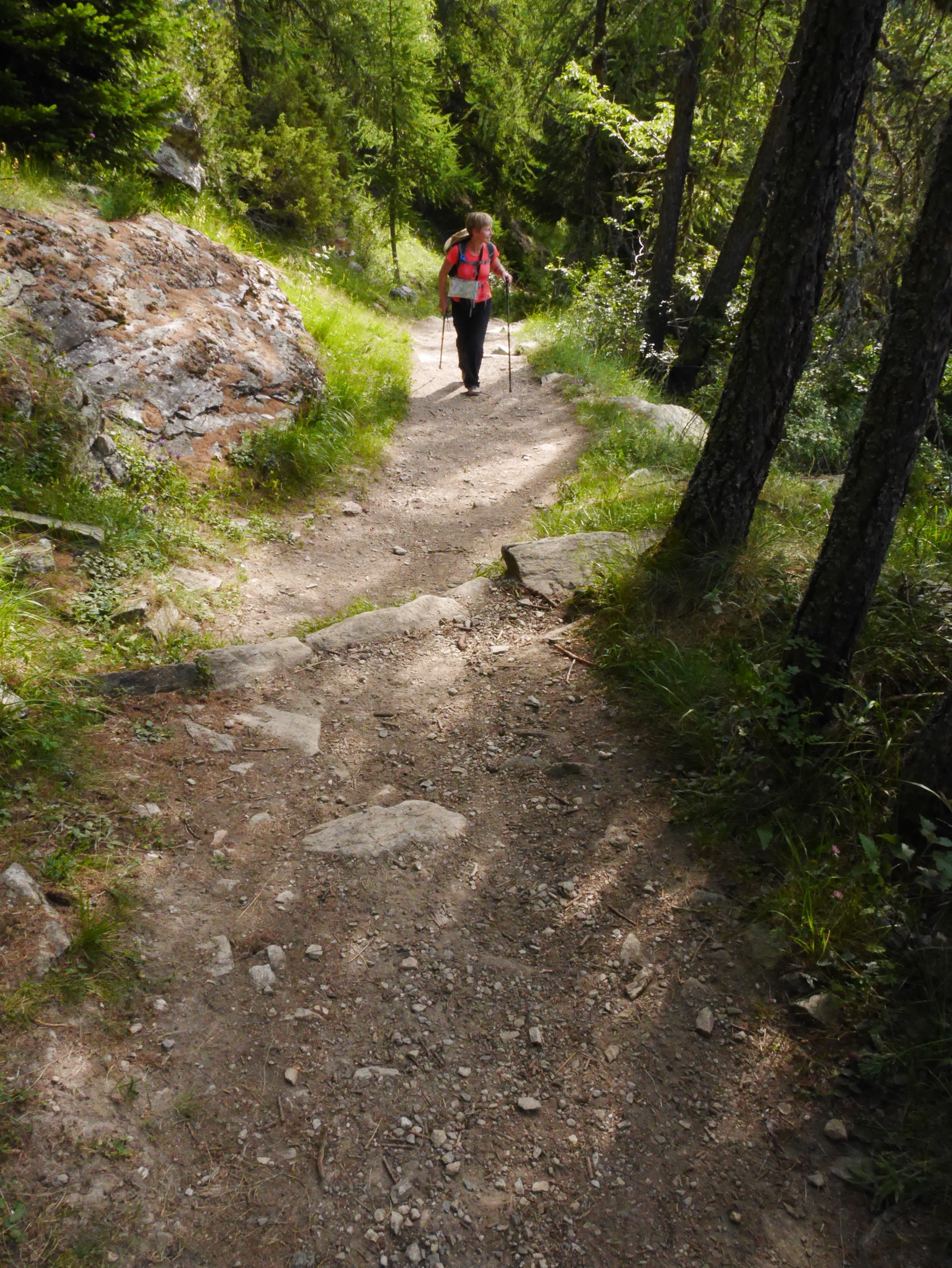 Soon the road became a track through trees and the sounds of cars and people faded to birdsong and crickets. The path was gently uphill but smooth and easy and we plodded up occasionally overtaking other hikers, occasionally being overtaken, but it wasn’t busy. Then the TMB route left the smooth track for a steep rutted path which zigzagged up in the shade. Eventually we were looking down on Courmayeur stretched out across the valley floor 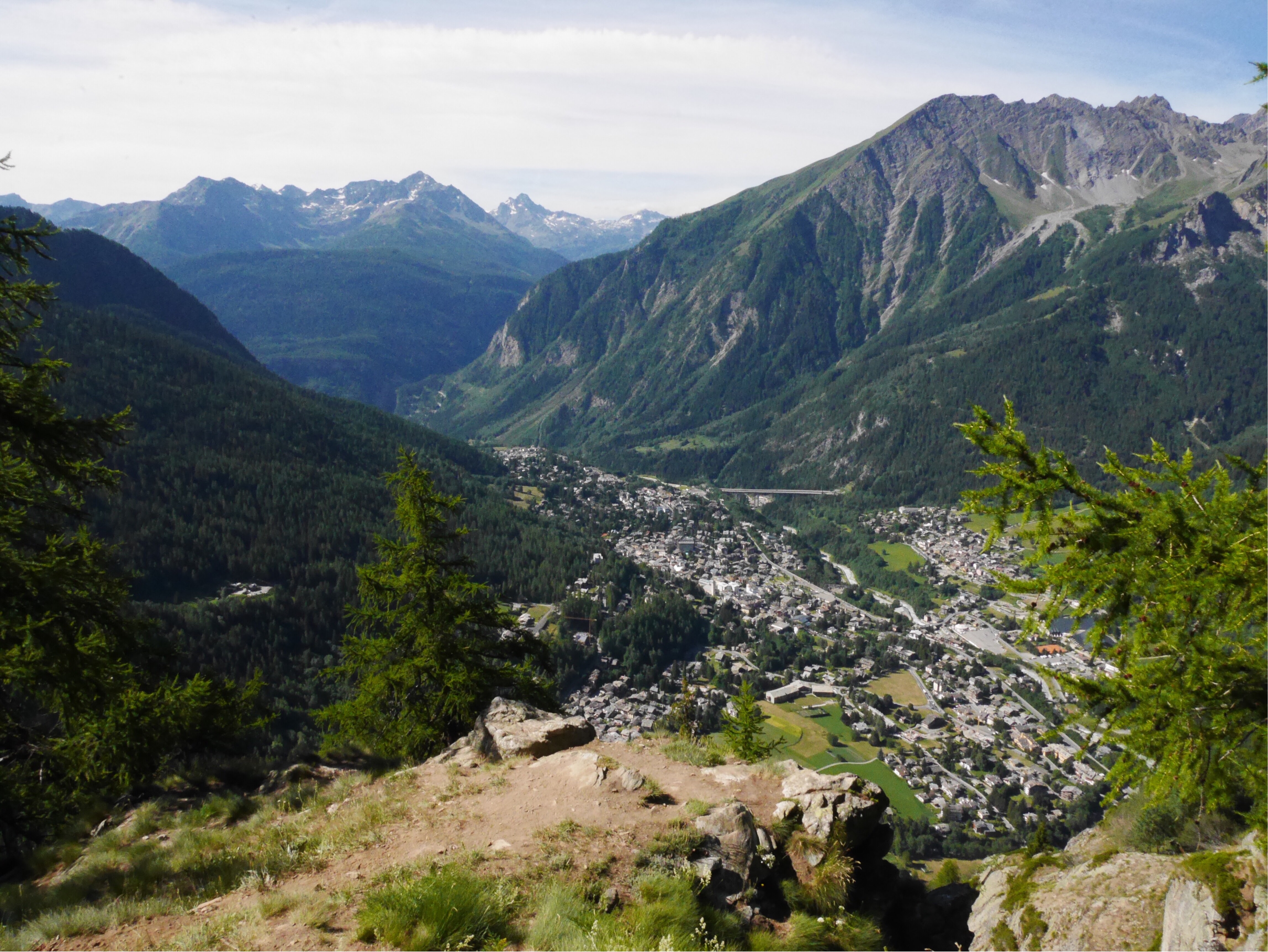 Up we went, the track getting steeper and narrower and more rutted. 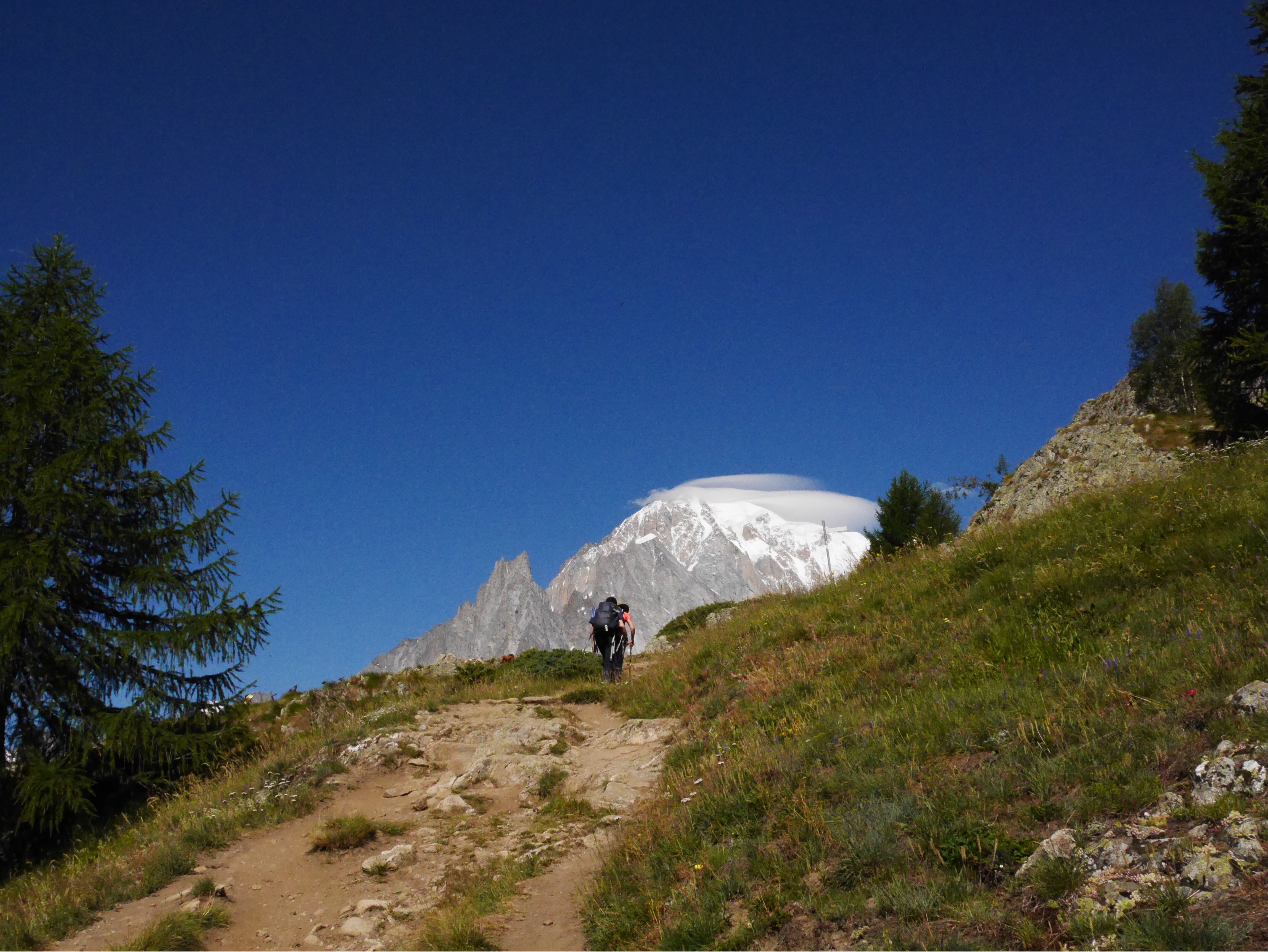 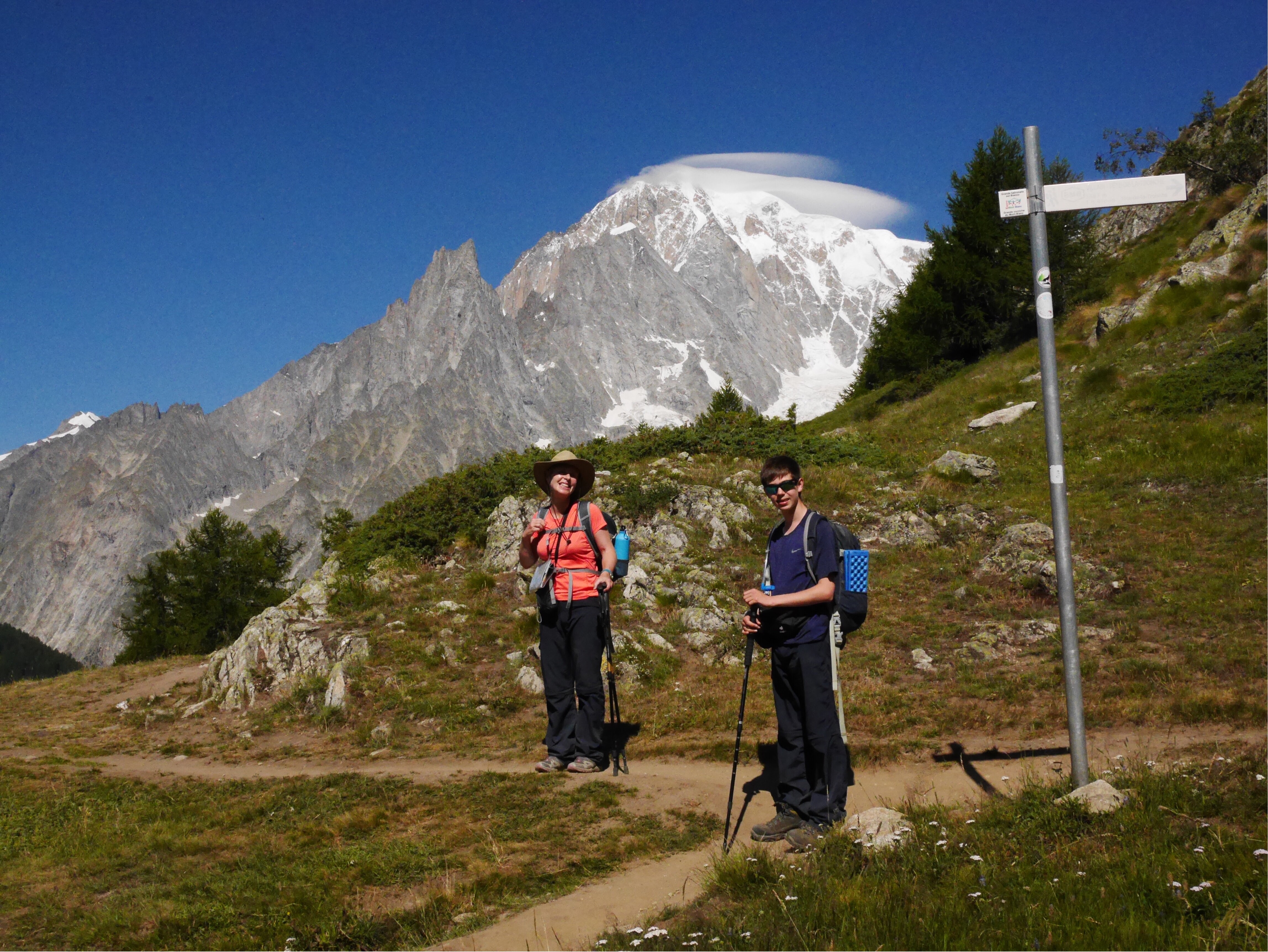 We emerged from the tree line to see Rifugio Bertone basking in the sunshine, so we walked up to it, got some drinks and sandwiches and did the same. A little pet goat came and snoofled about, looking at us with its goaty eyes. It smelt a bit goaty too, but then they do of course. 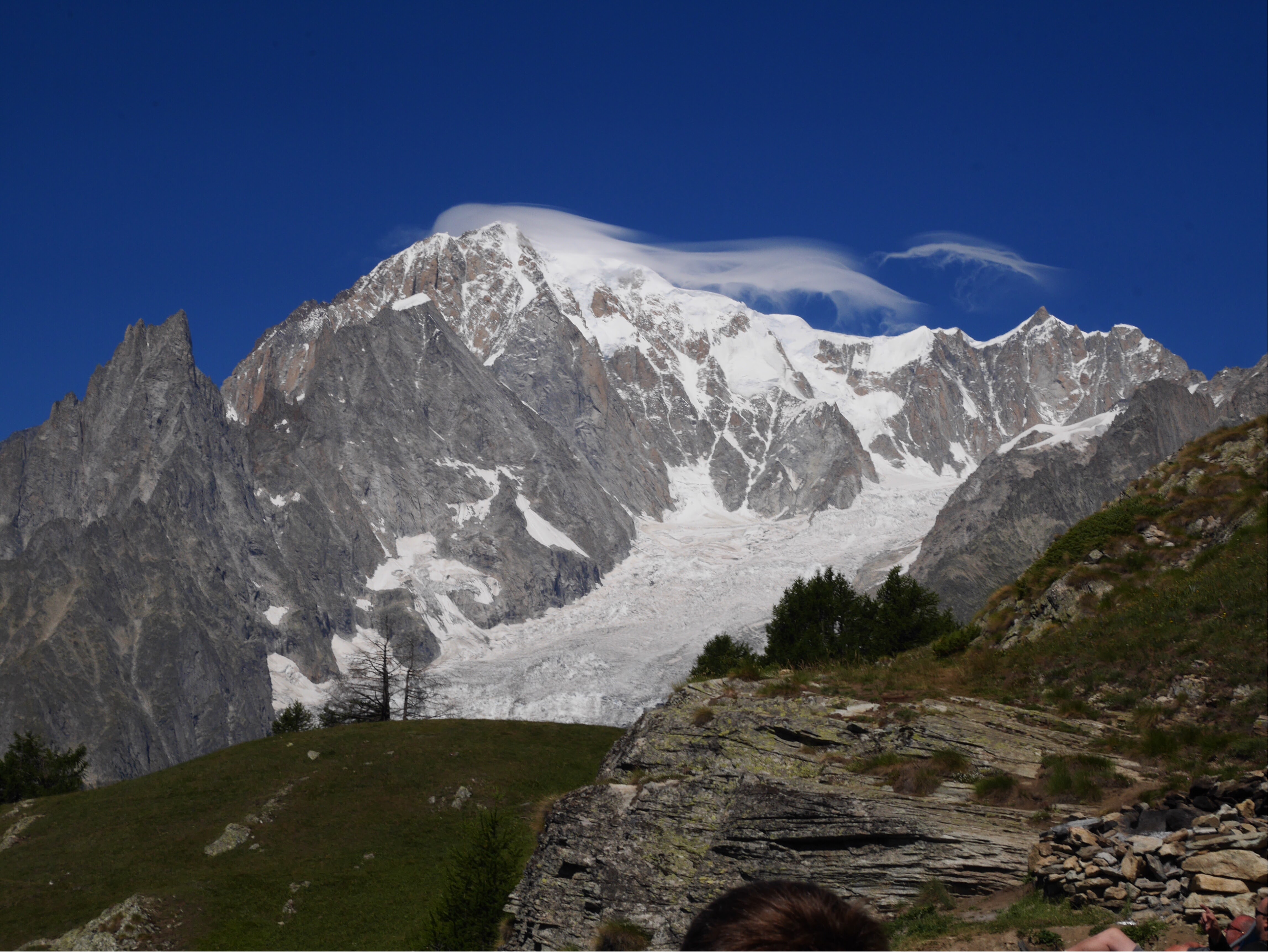 It was here that we had to decide whether to take the standard TMB route along the side of the valley, or up to the top of the ridge and along it, which involved the same amount of steep climbing that we had just done over the previous two hours. But the sun was shining, the air was clear and the high route was supposed to be a bit special, so we set off uphill again. 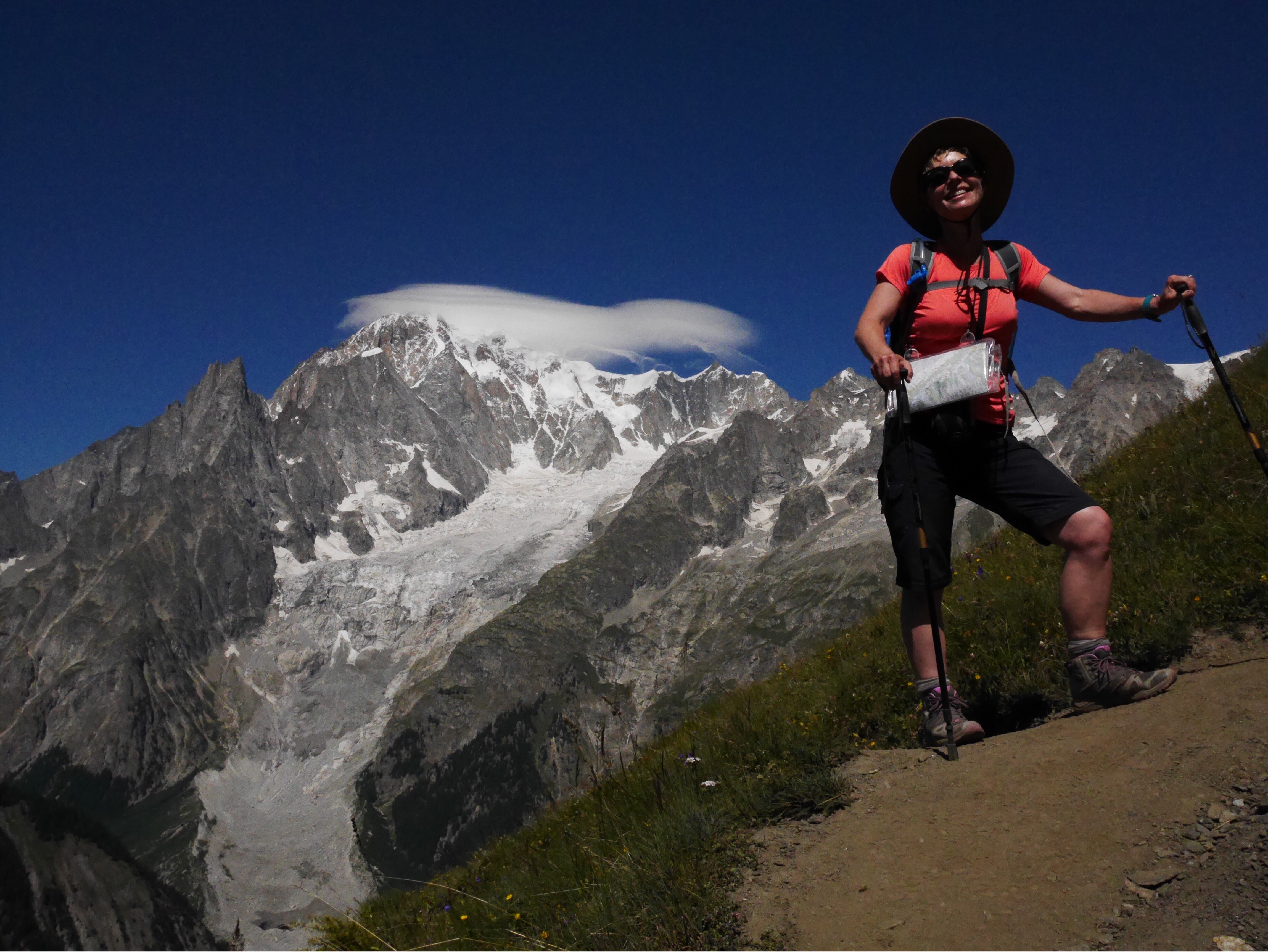 It was steep, but doable and before too long we were on the spine of the green grassy ridge with views back down towards Courmayeur and across to the Grandes Jorasses, which were certainly very Grandes – pointy and snowy and worthy next door neighbours to Mont Blanc. 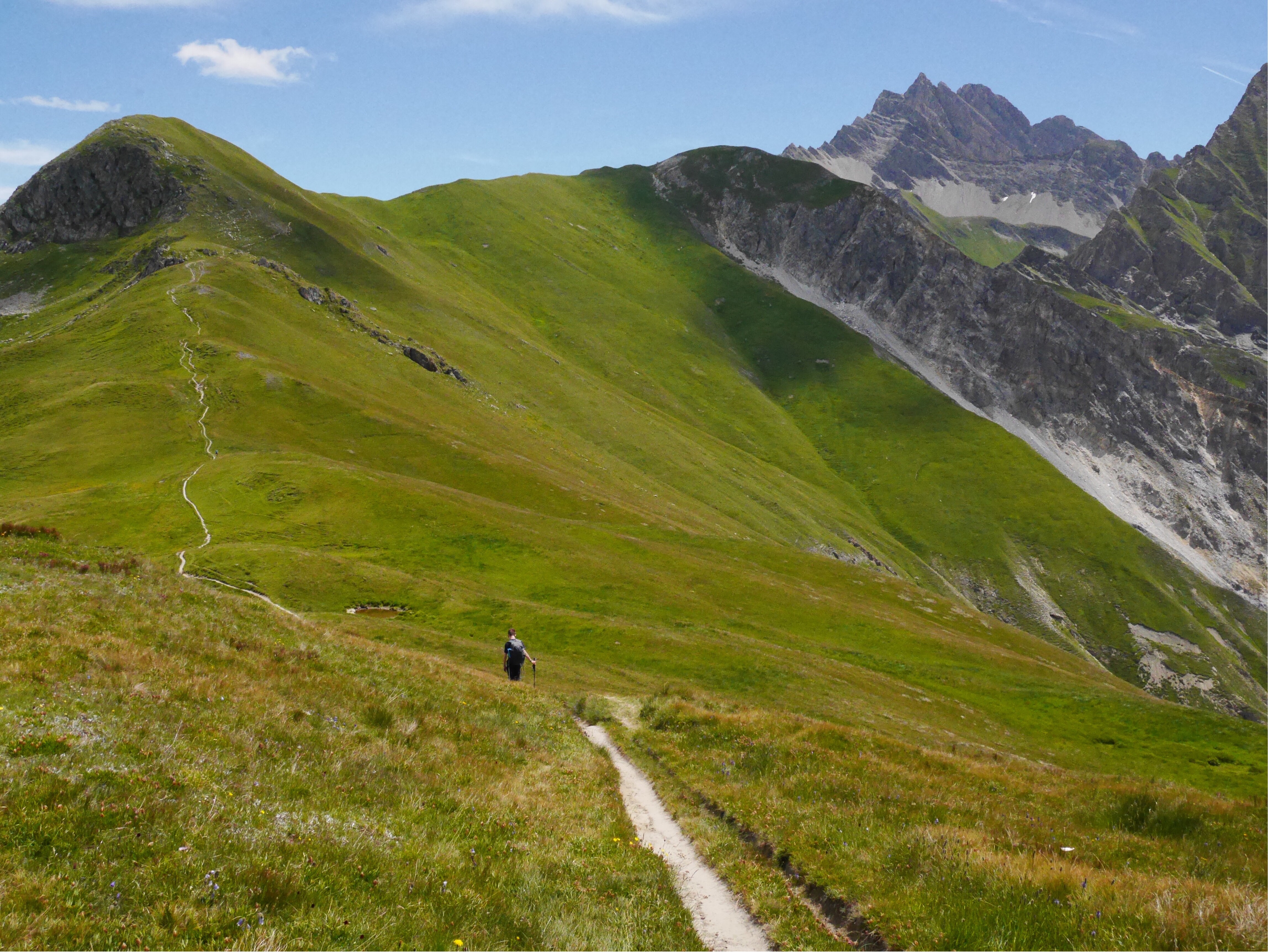 This is how I imagined the TMB to be – high mountain passes with towering snow-covered mountains under a crystal blue sky. It was marvellous. 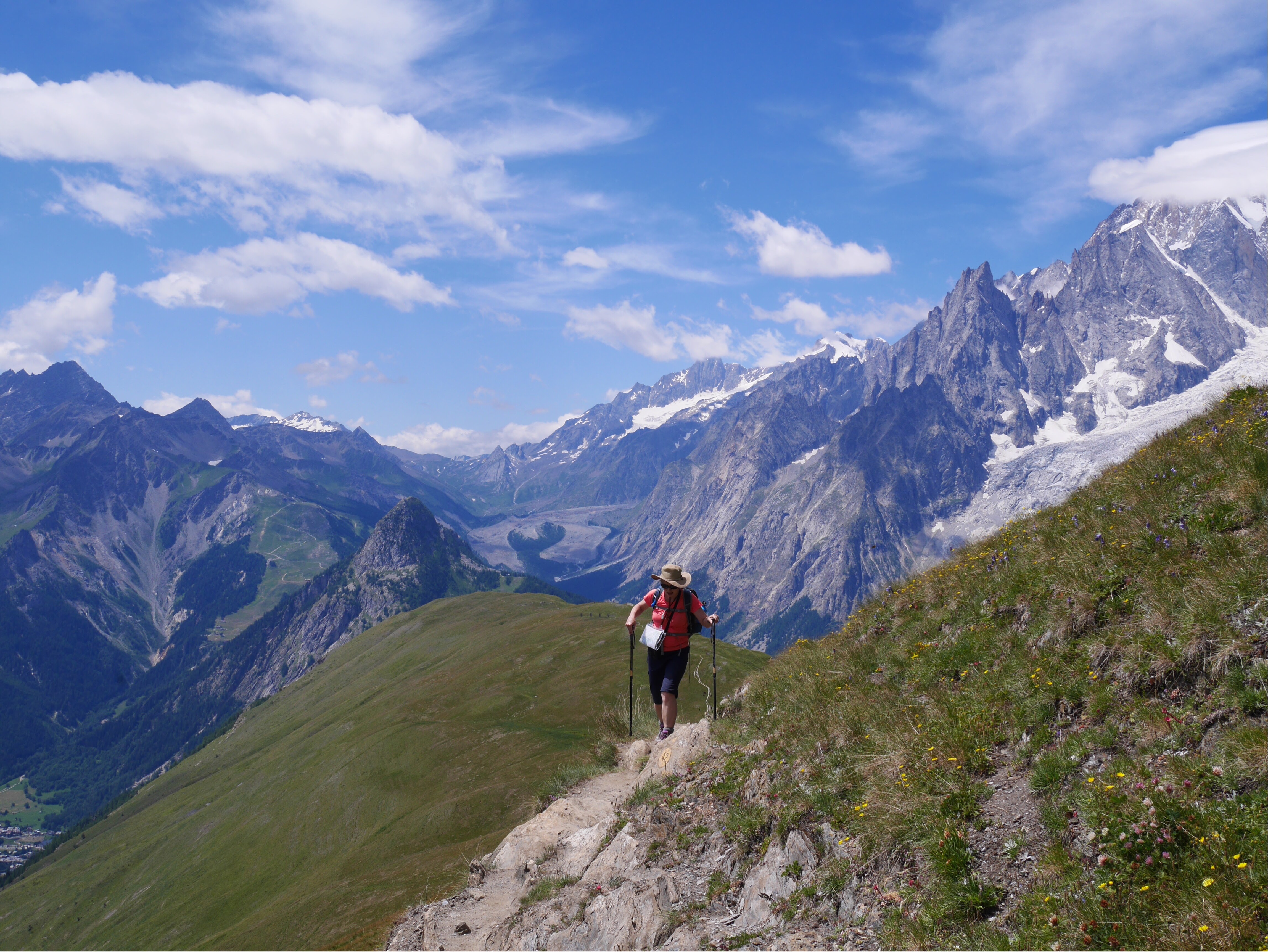 We’d been under the impression that the ridge would continue more or less level, but all too soon we were heading downhill only to start climbing again to the Col Sapin, which is 2534 meters, or just under 8,500 feet. The ridge was knee-tremblingly narrow in a couple of places, but the top was a round smooth grassy dome where we spent half an hour or so drinking in the 360 degree view. 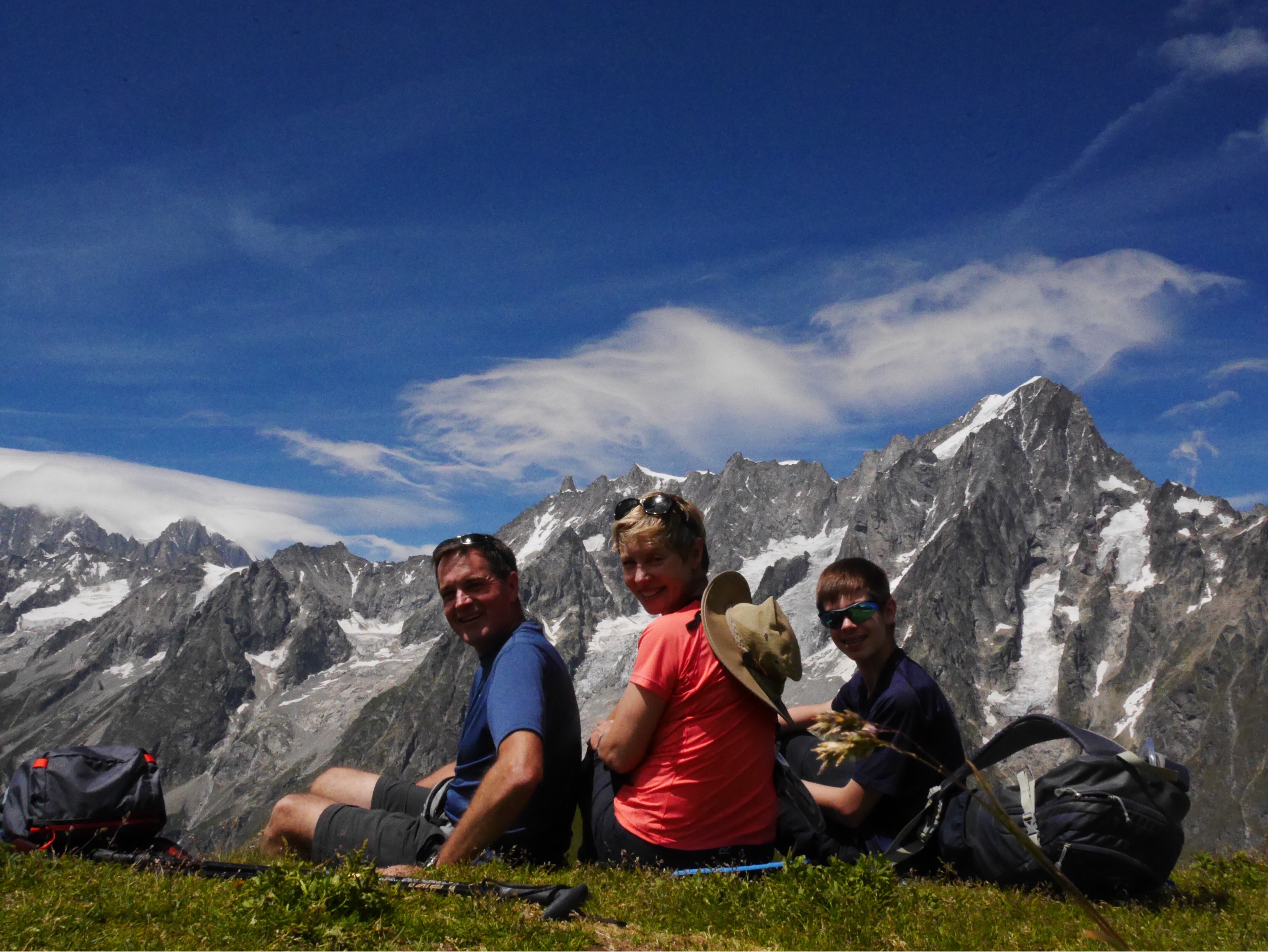 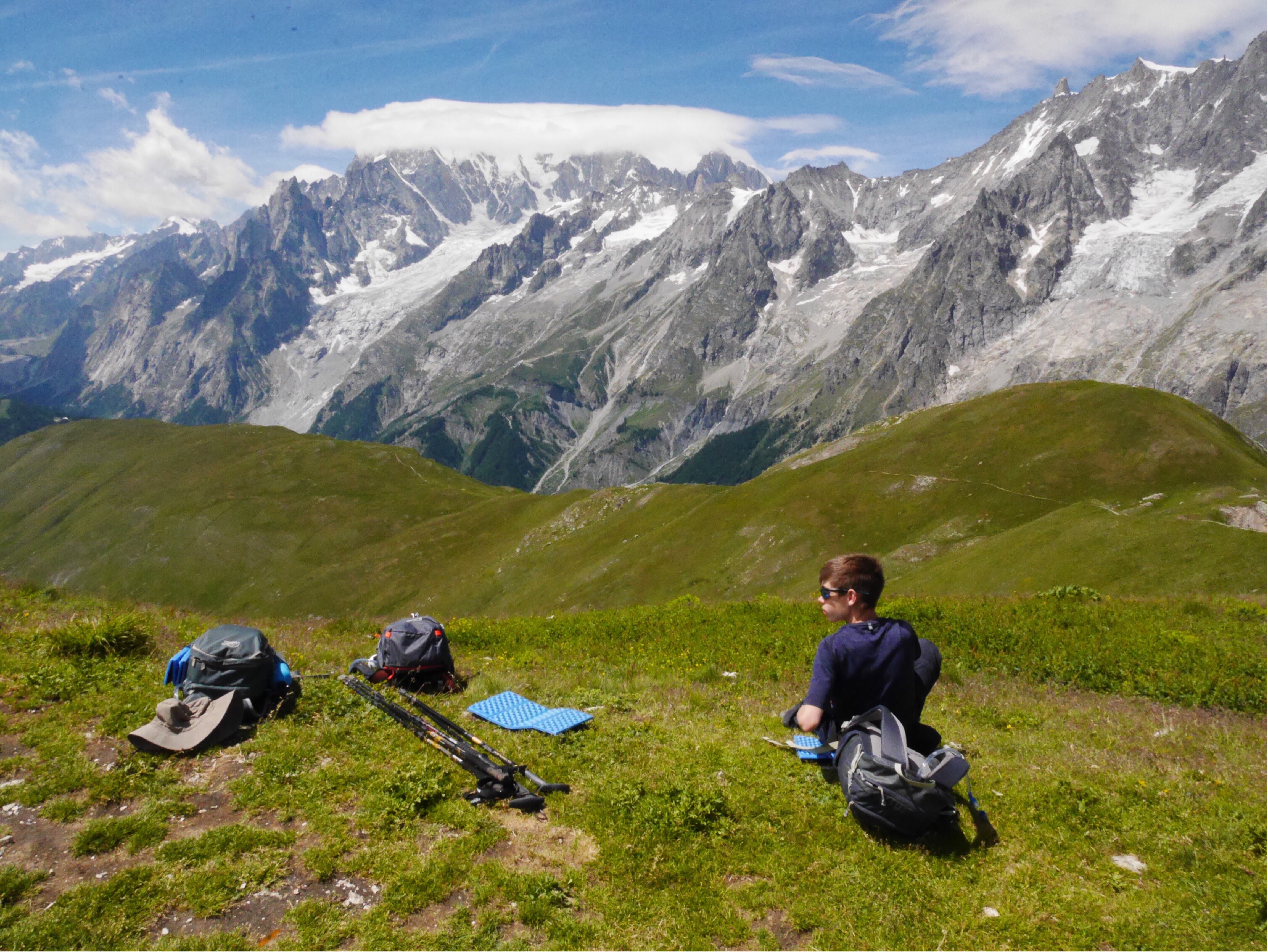 When we got there a skinny chap with a goatee beard was packing up a drone he’d been using to film other members of his group as they made their way down. He was an enthusiastic outdoorsman from Otley in Yorkshire and was particularly taken with the idea that Tom was filming something for the Kendal Film Festival. He set off back the way we had come, intending to then take the lower route to the refuge we were aiming for. We stayed on at the summit though. The air was full of honey bees which seemed particularly attracted to me and kept sunbathing on my t-shirt sleeves, which was a little unnerving. 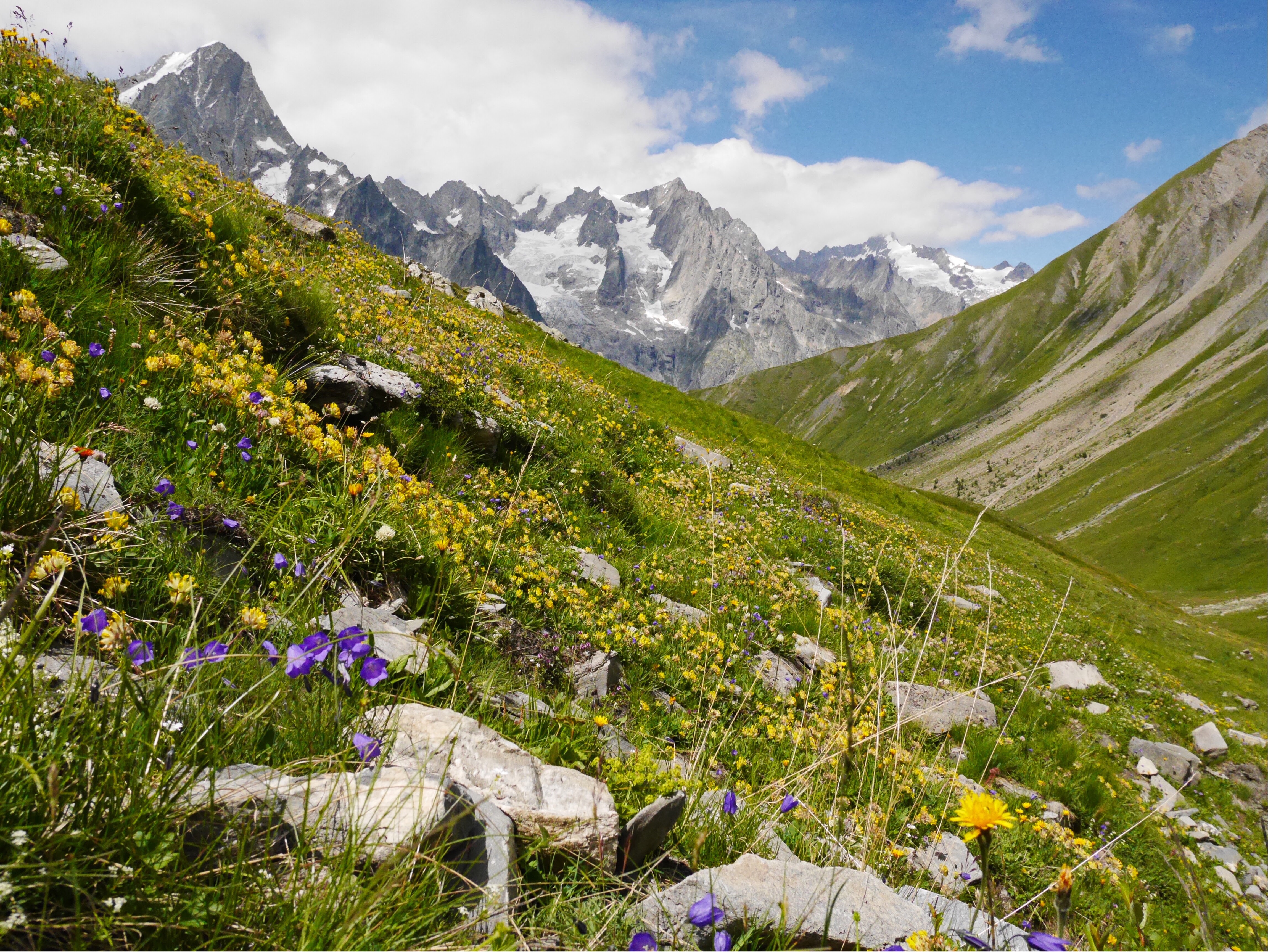 Eventually though we had to tear ourselves away from this high little world. As we were packing up, a sudden gust of wind picked up the foam mat I’d been sitting on and shot it high into the air. It billowed about above our heads and I thought we’d seen the last of it, but all at once the wind deposited it down on the ground ten feet away. Tom grabbed it.
Going down was hard work, on a very steep narrow track covered with powdery dirt and loose shale. When we got to the bottom of the col, I realised that the blue and red blobs I had taken for recycling bins of some sort were actually a French couple sunbathing. At this point I’d been under the impression that we would just head all the way down to the refuge, skipping gaily through soft meadows and pausing only for handfuls of chocolate and to admire the view. But it turned out we had to go over another ridge first, climbing several hundred feet before we could start descending. Ag. It was fine. 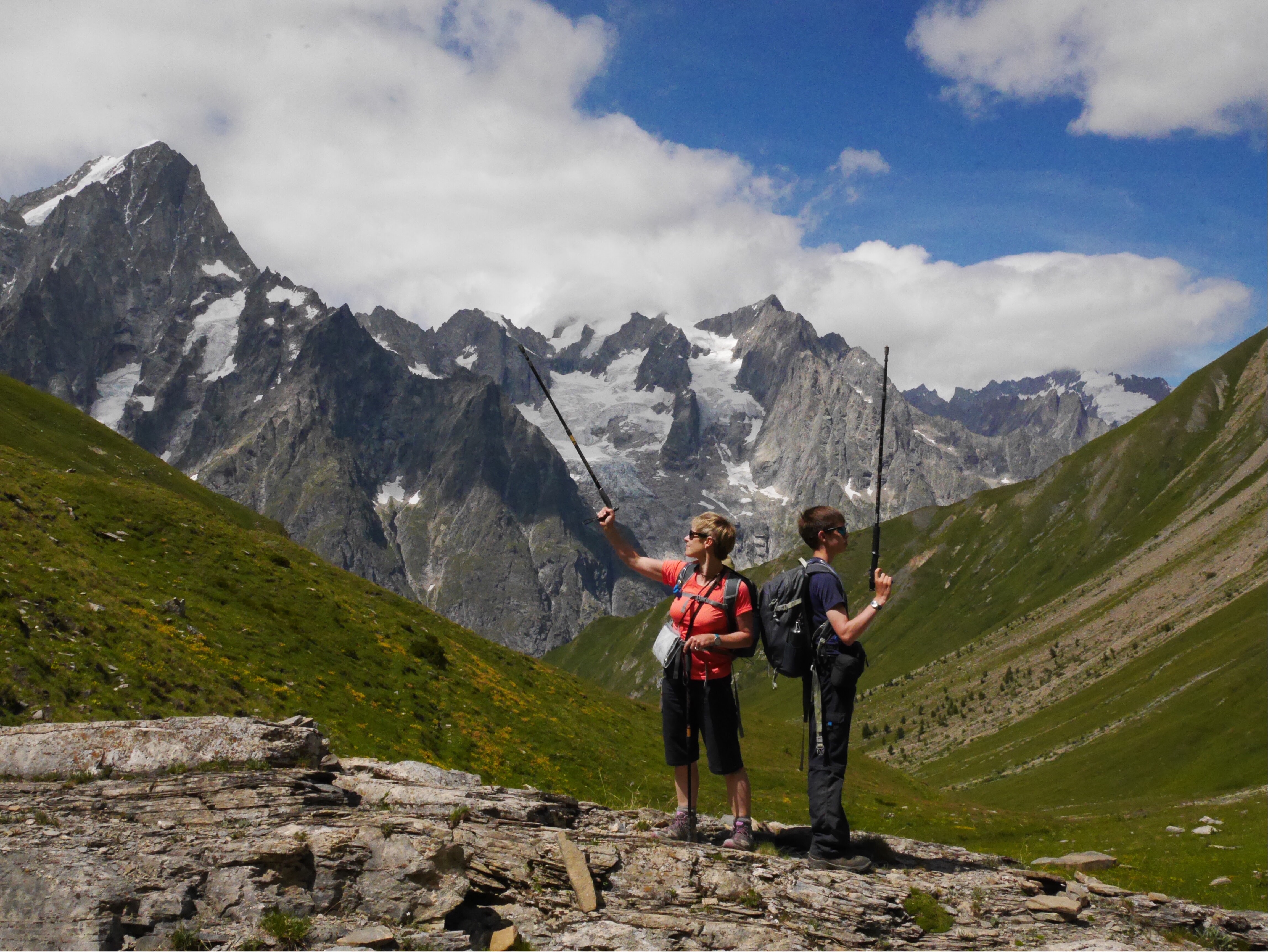 We spotted marmots on the way up too. At the top of the ridge a herd of cattle wondered what we were doing. One of them was quite keen on licking me in a friendly sort of way, though on the whole I was against it. 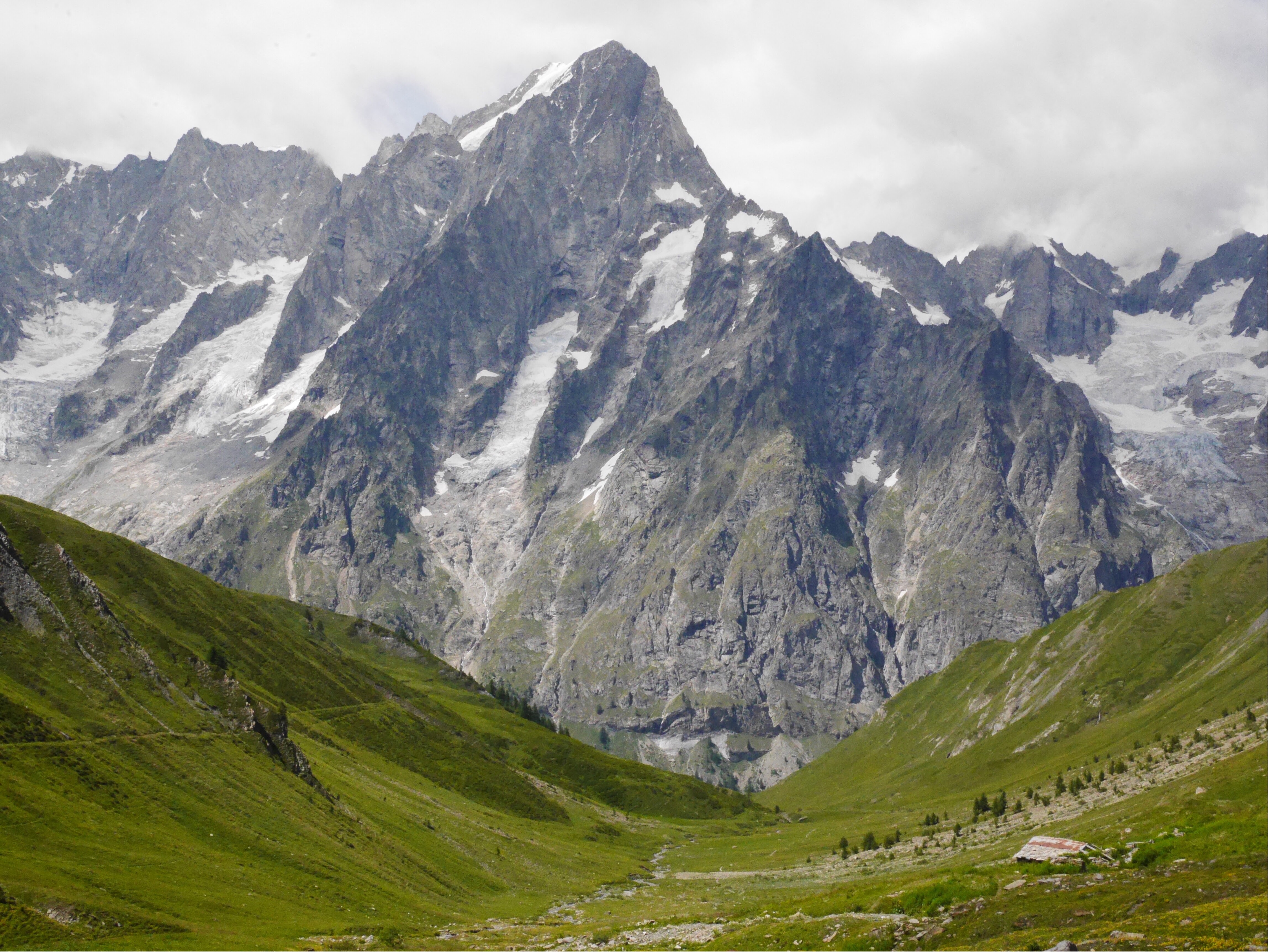 We walked down through a broad glacial valley with the imposing rock wall of the Aguille de LEveque facing the end of it – all 11,700 feet of it, craggy with glaciers and topped with grey clouds. We spotted the refuge and quickened our pace with the prospect of food and a bed. But it turned out to be a farmstead. 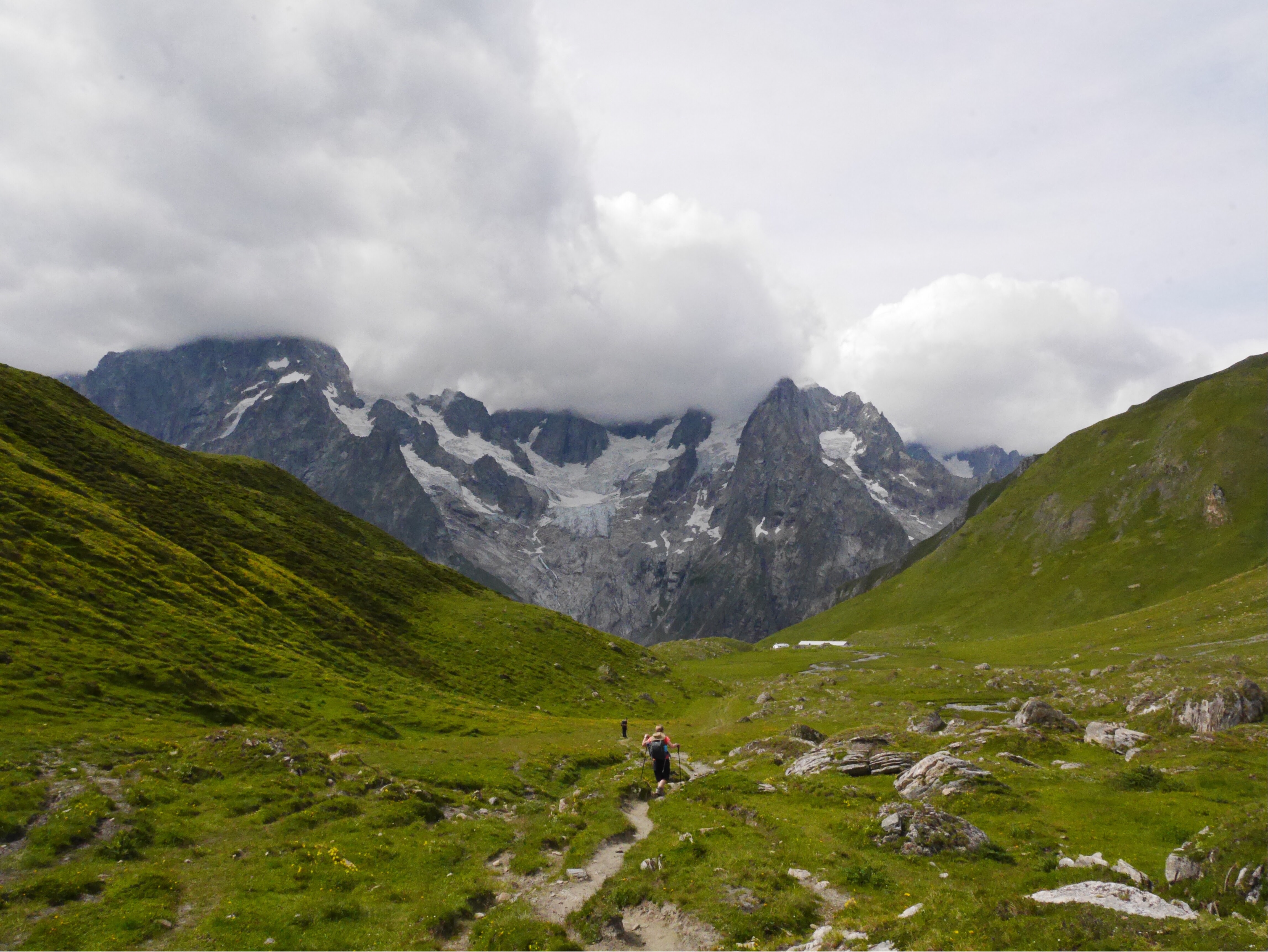 Half an hour further and after a little more marmot spotting en route, we were having a drink in the last of the sunshine on the refuge terrace. 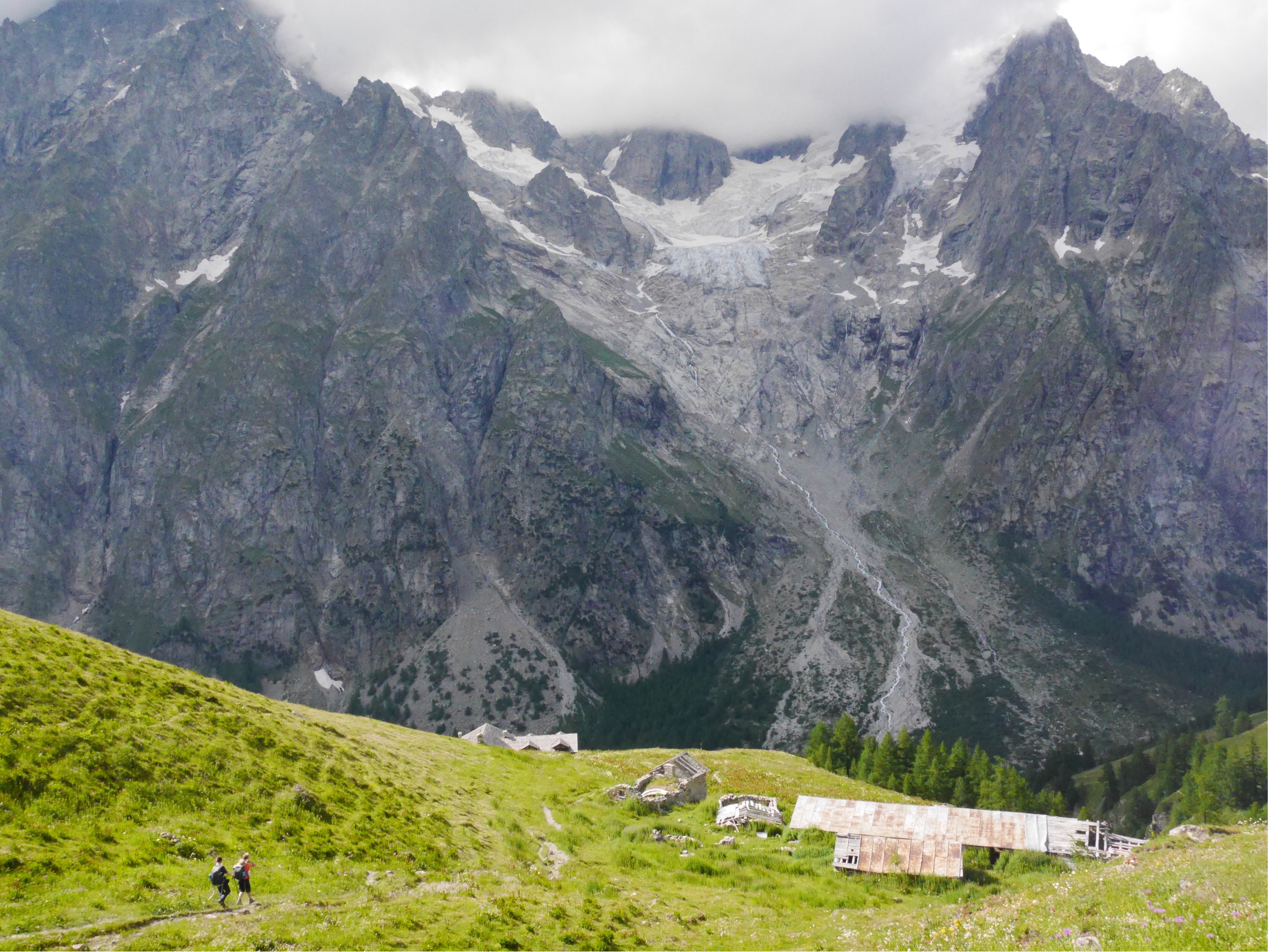 Supper was a delight. A mixed salad with a tiny piece of bread cheese and honey, followed by a pea, bean, lentil and pearl barley soup, a piece of cheese then falafel balls with potatoes and leeks and nutty little courgettes. Then a lemony cream posset for pudding. All served simultaneously to about ninety people.

We were good for nothing after that. The older members of our party are feeling somewhat weary (the younger member has barely noticed that we’ve done anything physical at all). Observations over supper…
P: “This holiday is much harder work than our normal life”
T: “All our holidays are like that…” 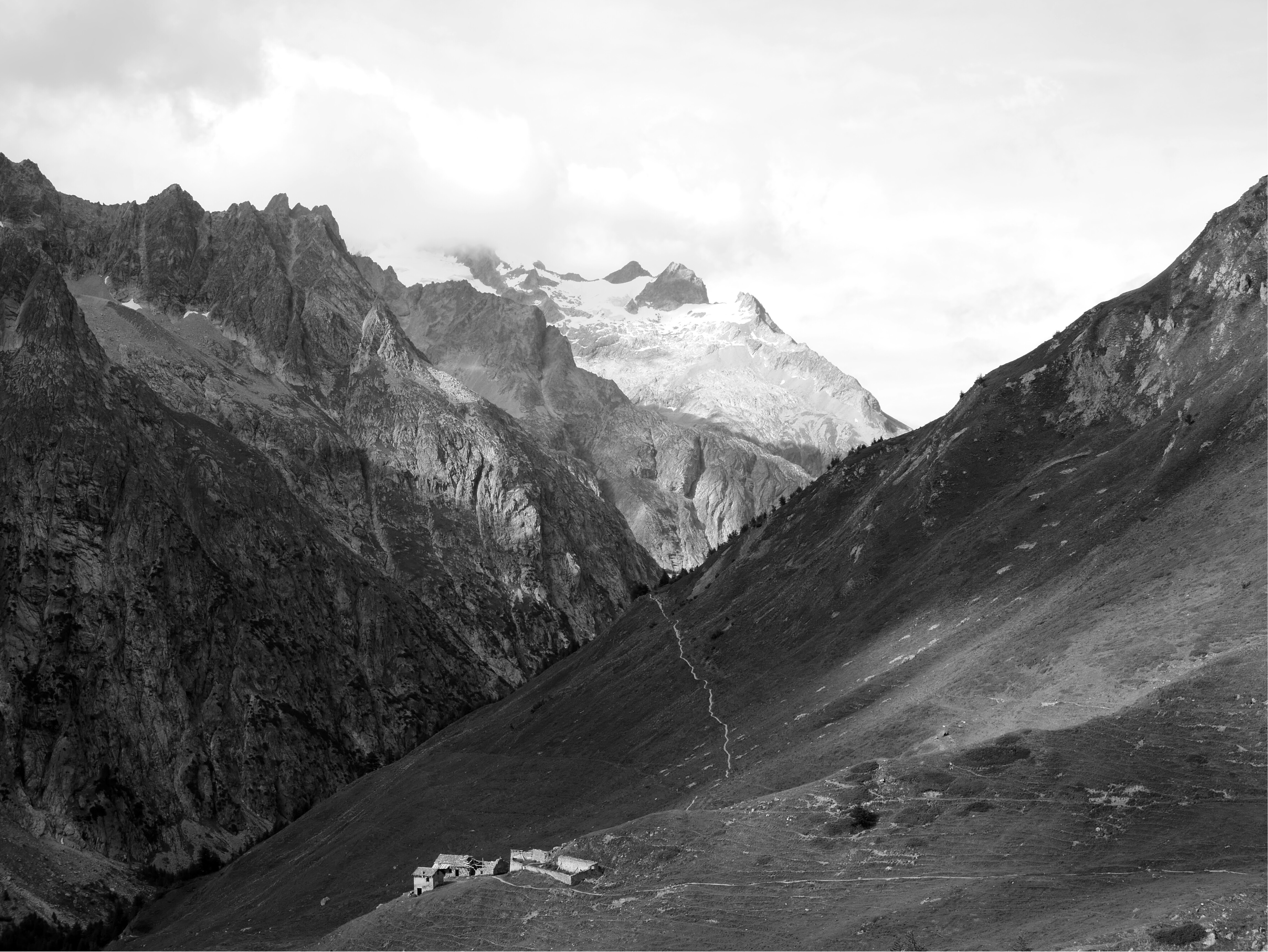 Our path over the mountains is the purple one and the figures miss out a couple of hundred feet and half a mile or so when I turned the device off by mistake…whoops. 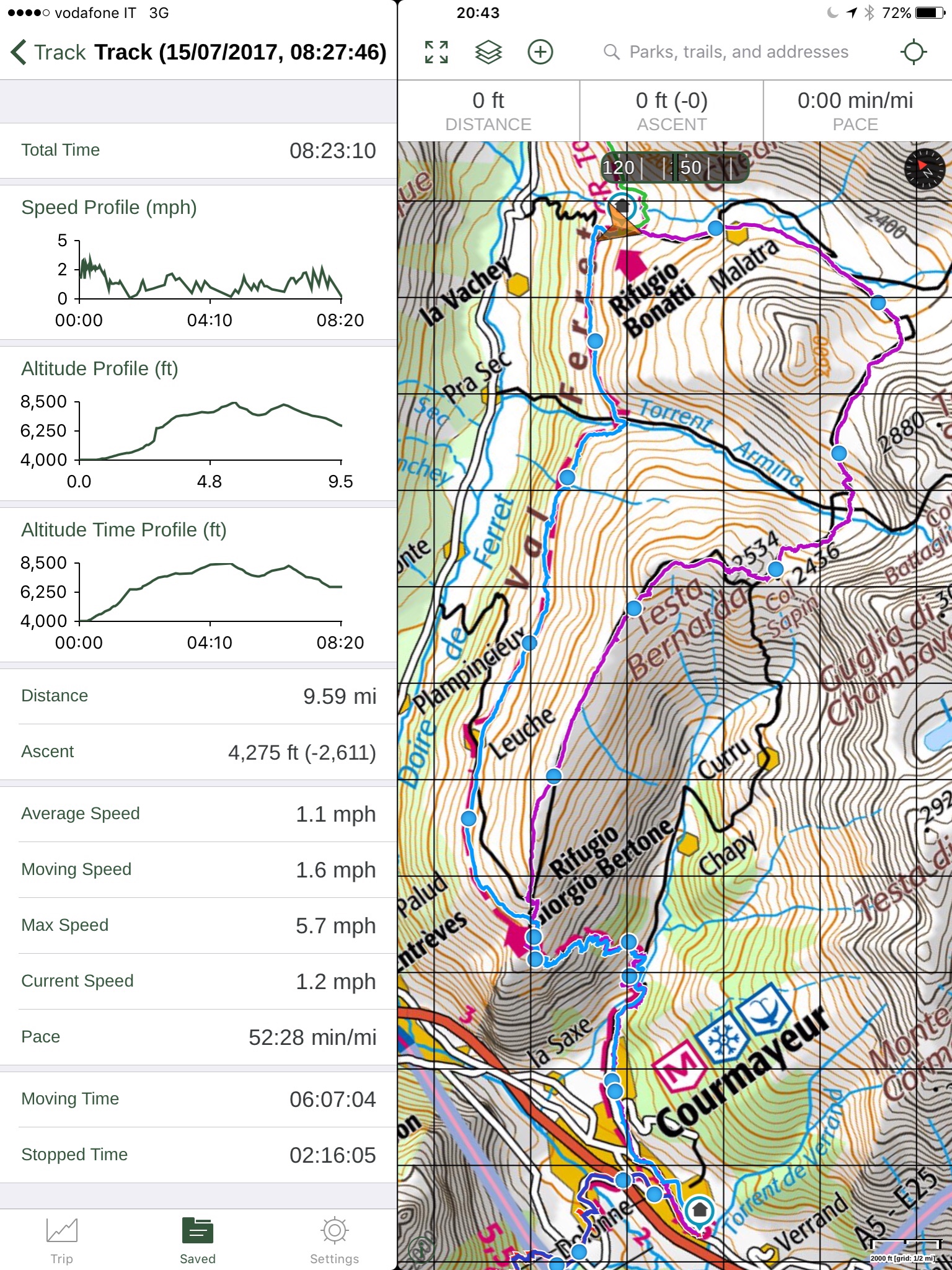