By Richard ListerAugust 17, 2016
No pressure to be anywhere this morning, so we went over to mooch breakfast off the Sturkses. Helen had already made a whole stack of pancakes, we found some bacon and orange juice, Tim made coffee and we sat in the sunshine making it all disappear. 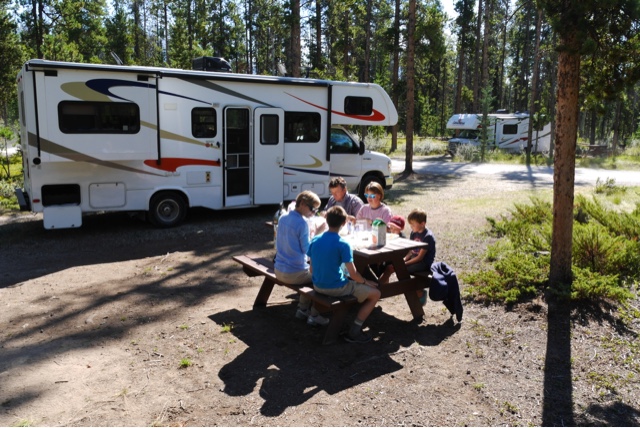 Helen and Tim had plans for Maligne Lake, but our goals were rather less spectacular. The wonder of three whole nights somewhere is that it takes the pressure off a bit. So yes, there are many hikes available and many sights to see, but sometimes what you need is clean socks. Jasper is blessed with two laundromats and, wonder of wonders, both serve coffee and have wifi. So that was this morning taken care of. We all played with our photos; I blogged, Tom blogged, Philippa instagrammed. We downloaded many, many emails and deleted virtually all of them immediately. Really who needs that stuff? Then with all the wifi used up and the coffee drunk we took our fresh smelling parcels of washing back to the RV. There is now a good chance that we might see some wildlife on our next hike..
Lunch was at a fantastic place called Evil Dave’s where the food was served with a smile and eaten with a grin. There was hardly anyone in there (it was about three o’clock after all…). Having spent the whole day so far eating and drinking and looking at screens we decided we probably ought to do some Rockies stuff, so we hit the road for the Athabasca Falls about thirty K down the road. It’s another popular spot, just off the road but the National Park Service has really made the most of it.

There are lots of infoboards, as well as paths down to the river, through an old river channel and around to a big pothole carved by swirling silt.

They were also very keen to stress how close we were to an untimely end if we stepped outside the guard rails. Indeed just about every bench had a little plaque with a sad story about someone who thought it a good idea to pose on an outcrop just inches from the thundering chasm only to be recovered by divers two days later.

We had just about finished exploring when rain clouds started looming over the mountains. That was our cue. The rain chased us back to the campsite and we were making plans to spend the evening with our neighbours the Sturks, when the most almighty thunderstorm started rolling in. The lightning was spectacular, striking the campsite at one point with a terrific crack. One by one everyone turned out their lights and watched the display from the cosyness of their RVs.