We were up early for an appointment with a horse. Three horses in fact who, even now, were having their breakfasts unaware that we were coming to sit on them. We’d booked a morning ride some months ago and arrived at the Jasper Riding Centre before nine for a three hour ride into the hills.

Our guide, Sarah was a jolly Australian who kept up a running commentary as we plodded into woods that were still dripping from last night’s rain.

She found the footprint of a small bear in the mud, and the scratch marks where a bear had climbed a tree.  She pointed out an elk grazing in the forest and identified the shriek of a loon. It was nice to have our surroundings interpreted and I think we all learned quite a bit from her. 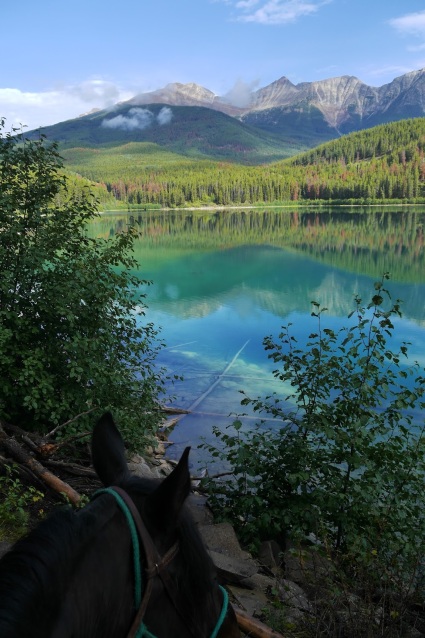 The first part of the trail went past a glassy Patricia Lake where a buoy identified the sunken remains of an experimental ship made from, of all things, ice and sawdust in order to evade magnetic mines. Apparently it’s popular with divers though you had to wonder how much would remain of a ship made from ice and sawdust. It sounded a bit like an episode of Colombo where Peter Falk would discover that was the reason no-one could find the murder weapon.

The Sturks had booked a shorter, later ride with the hope that we would be able to meet up on the circuit and do the end bit together. But the stable folks had said that wouldn’t really work as the horses all adopt their own pace and it’s a big mountain etc etc. Still we did actually bump into them en route, with Harrison looking thrilled as he bounced along Thelwell style, and Fynn looking very solemn.

We assumed we would stay together but we rode with them for about two minutes before Sarah decided to lead us up a different part of the mountain. And not without some drama. Her horse suddenly reared not once, but three times and she struggled to get it back under control. It left our mounts a bit spooked and Sarah was clearly unnerved, saying that had never happened to her before. Once things had settled down we carried on up the trail and to be honest it was good to finally get out of the woods and onto a rocky ridge with a fine view over to Jasper.

All too soon though we were heading back down the narrow, stony path with the horses sometimes struggling to find their footing. Then on through the woods. And on. I’ll say this for the Jasper Riding Stables, they make sure you get your time, and then some… With what looked like fifteen minutes left of our ride, Sarah said we would probably be another hour or so. At this point my knees were beginning to compose formal letters of complaint and my back was saying I’m not as young as I used to be. As if I needed reminding… So up hill down dale, all through the woods and eventually we got back to the stables where there was a serious question as to whether my knees would let me get off. They sort of did in the end but there was a fair amount of standing on my part before I risked actual walking.

We drove back down to Jasper and found lunch in a local institution, the Bear Paw bakery. The line was almost out of the door, but P couldn’t walk by their white chocolate and raspberry scones and, it turned out, neither could I. It was lunch and a half even though Tom and I shared a sandwich.

We staggered out and decided that for various horse and lunch-related reasons we needn’t go into here, we probably wouldn’t be doing a whole lot of walking today. So we decided to follow Helen and Tim’s example of yesterday and go to Maligne Lake (pron Mal-een. And Layke). It’s a fair old drive along a pretty road which only gets to the lake but has another rather magnificent one on the way – Medicine Lake, which is shallow and sandy for much of its length. It actually looks like you could wade across it but it’s huge and dramatic and we liked it. Actually we liked it more than Maligne Lake to be honest. It is the most photographed place in Alberta apparently but the thing that makes it picture perfect is an island at one end of it which you can either do a very long walk to or you can book a place, months in advance, on one of the little boats which shoot up there every few minutes. 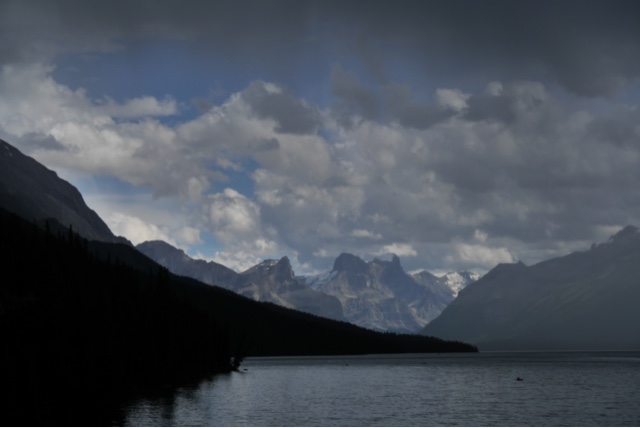 We did neither and the weather was beginning to turn malign (pron “a bit rainy”) so after a bit of a stroll along the grey/blue waters edge, and some stone skimming with Tom we called it a day and had a cup of tea in the RV as the rain fell outside. To be honest, I think that was what we wanted all along.
We got back to the campsite to find a lovely note from Helen stuck to our power box inviting us to supper chez Sturk that evening. They rolled up a little later with the makings of a fantastic supper. Honestly, give Helen an old carrot and some Bisto and she will turn it into the kind of meal worthy of a funky pop-up restaurant in Shoreditch. In fact she had pizza dough and pasta and the makings of a delicious salad all of which she whipped into shape whilst having a shower and making sure we are OK for nibbles. Tom had the boys running around while he filmed them for a little movie about two brothers looking for adventure. Meanwhile, Tim and I did the manly thing of staring at the fire while it failed to light, and then trying it three more times after lots of discussion about kindling. And there was some beer involved.
It was a fun supper under the stars with the boys competing to tell jokes and Harrison making them up as he went along. We actually haven’t seen all that much of each other over the past few days, but it’s been lovely to spend a bit of time together in such a special place.