Our last proper day in the Rockies, so what to do? The one hike that keeps coming up when we talk with people in campsites is The Iceline. “Oh you MUST do The Iceline” and “The Iceline! It’s my favourite hike – are you going?” Yes well erm… It is one of the most famous in the Rockies and starts from the tallest waterfall in Canada (see previous note) so what’s not to like? Actually the only thing not to like is the fact that the long road up the mountain to the Takakkaw Falls has a couple of switchbacks too sharp for long RVs which must reverse between them. Hmmm. Tim got to this point in their RV, decided discretion was the better part of valour and turned back. Thing is, we really really want to do this hike and the only thing standing in the way of it is whether I can go through with the whole reversing up a switchback bit. So I had better man up!
But I also Had A Plan. Namely, let’s go really early to avoid the traffic and get a parking spot at the falls, and have breakfast there. So at 7.15 we pulled out of the campground, T still fast asleep and P joining me up front after giving up on the idea of any further snoozing. It was lovely to see the sun light up the mountains in front of us though. And when we got to the Takakkaw Falls road there was no-one on it which meant I could actually do a three point turn and avoid that whole reversing thing. That won’t be possible on the way back down though… By 8 we were in the parking lot and making pancakes, joined by a somewhat befuddled Tom, who being 13, had slept through the whole drive.
Suitably nourished and clothed and with plenty of water we set off, along with a large portion of the rest of the region’s tourists. First past the Falls which are pretty splendid. Imagine a large river shooting over a cliff at considerable speed and you have the idea. 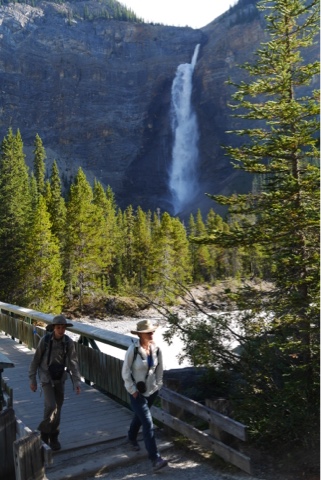 The noise was impressive too, a constant crashing and roaring that we could hear for the first few hours of the hike. We could see the falls too as we climbed steeply up the other side of the valley, through trees that got thinner and shorter as we ascended. 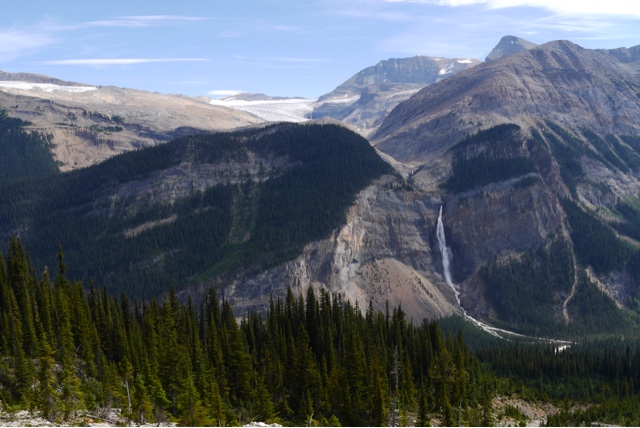 It took at least an hour to get above the tree line into rocky scree which we followed until we were walking beneath the Emerald Glacier, just a few hundred meters away, hugging the broad flank of the mountain. 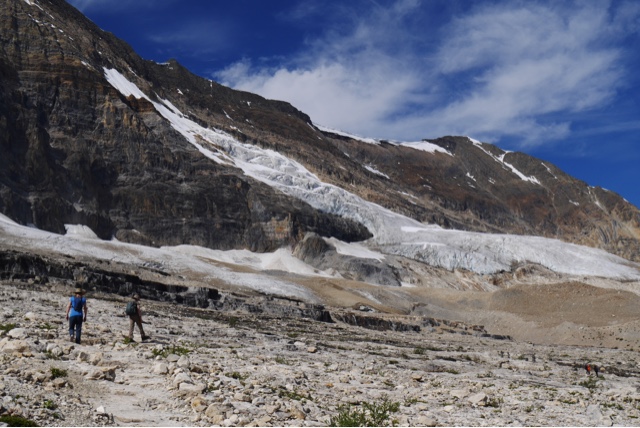 Its meltwater cascaded down through channels in the rocks so that we were again surrounded by the sound of rushing water. 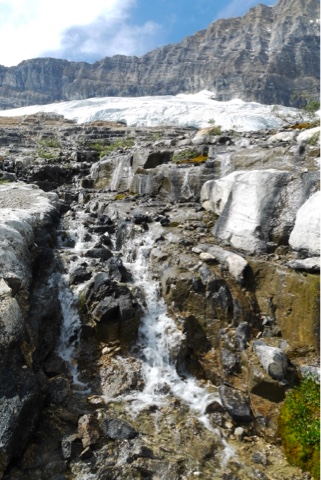 The sun was fierce and we were all light headed from the steep climb. I say “all” but that really means me and P. Tom, who was humming, seemed unaffected as always. 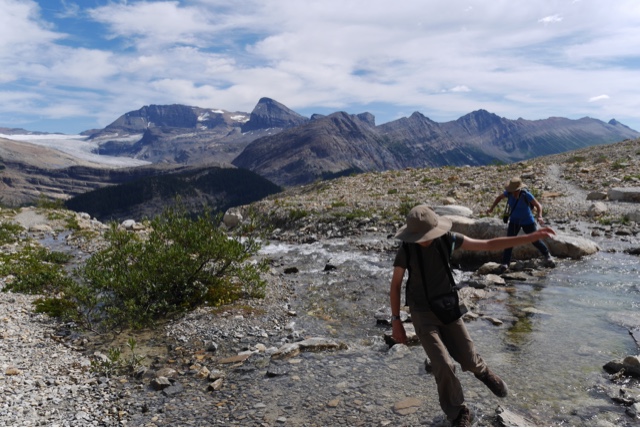 The further and higher we walked the more impressive was the view. Behind us were peaks silhouetted in the distance; across the valley was the crisp frosting of the Wapta Icefield, draped over the mountain range and feeding several glaciers and the Takakkaw Falls.

It was hard work but so worth it and soon we were passing small meltwater lakes and huge rocks left by the retreating glaciers. 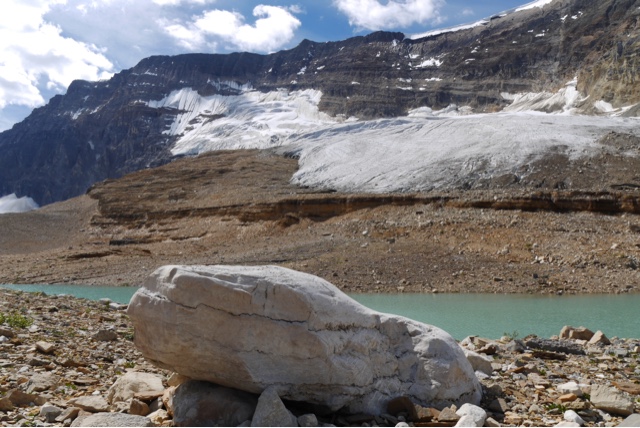 The air was utterly clear and we could see for miles. The best view on the Iceline is at its highest point at 7,340 feet, at which point we had climbed 2,400 feet. 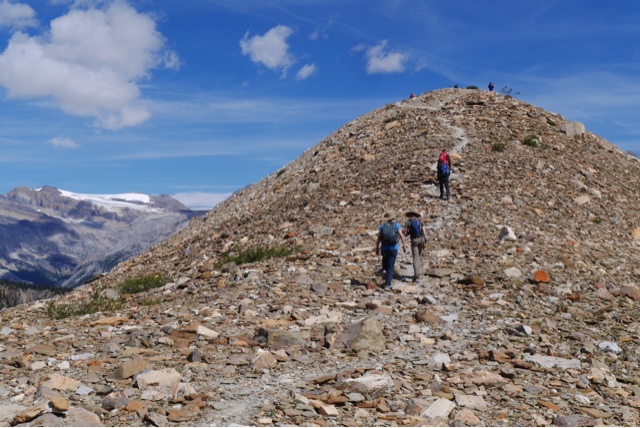 The viewpoint is on a steep, pointed hill which we climbed and found a large, flat piece of rock to sit on. This was a view and a half, stretching off in all directions while the sun shone and a sharp breeze took the edge off it. 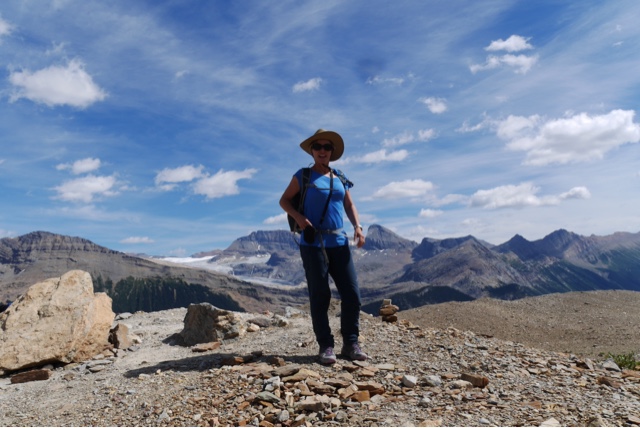 Perfect place for lunch you might say. And you would be right.

The way back is essentially the way we’d come. Unless that is, you take another spur down into the Yoho River valley which makes the walk a bit longer, but avoids the steep descent. Were we up for a walk of 21k? Yes, on a day like this we were. So we headed down off the rocky slope and were eventually walking into cool pine trees with trickling streams and flowers. 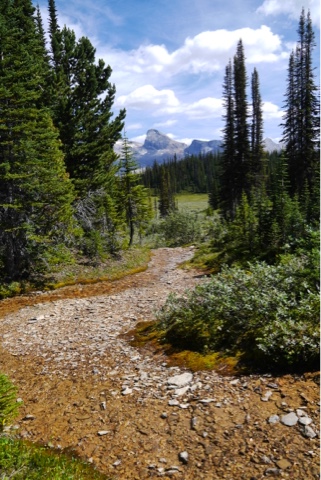 It was a completely different environment; less drama but just as pretty in its own way. 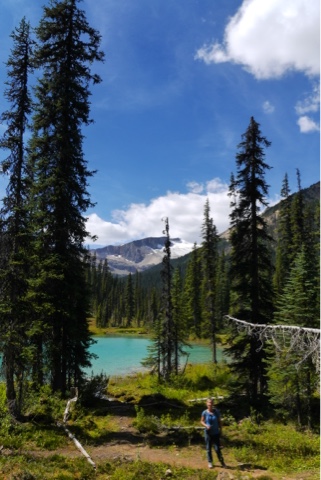 It was a long walk down through the woods, punctuated with a couple of dazzling small lakes and a terrific waterfall. 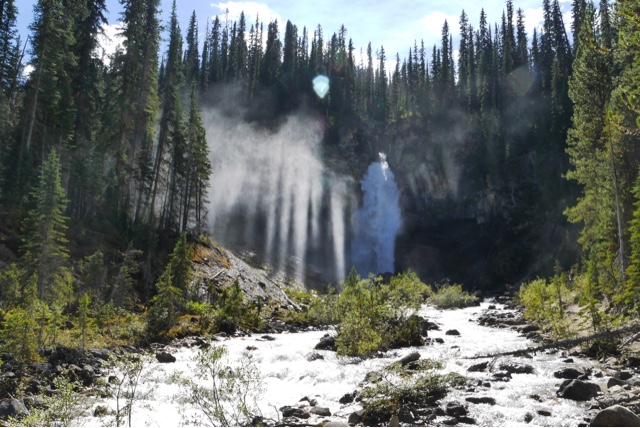 Laughing Falls wasn’t even in the guide book but was a glorious explosion of water through a narrow, twisting canyon, pounding the shallow river below and atomising into a fine spray. 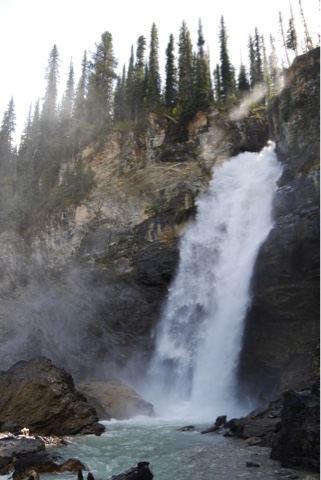 By the time we got to the Yoho River and the final four and a half K we were all bone tired. Soon though we could see spray emerging from the cliff signalling the Takakkaw Falls and journey’s end.
In the RV there were ice-creams in the freezer that just had to be finished up and remarkably it didn’t take much more than that to perk us back up. We walked down to the base of the falls with them. You can get pretty close and we were drenched by the spray.
There is nothing like a faceful of melted glacier to revitalise you after a hard day. This waterfall is an angry, violent pounding of a thing, with the thunderous main channel twisting and churning and pushing little cascades out to other parts of the cliff as if there simply isn’t room for all that water down the middle. In the late afternoon sunshine a rainbow appeared and then another above it. A double rainbow to cap the end of our final day in the Rockies. It seemed appropriate. 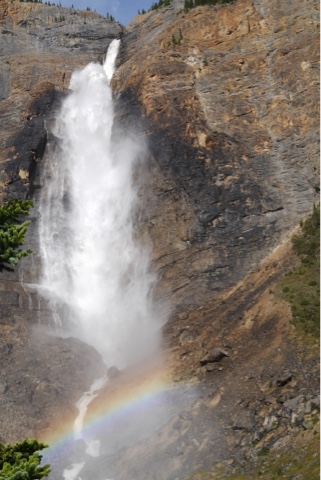 So there was only one thing to confront now. The dreaded switchbacks. I got out ahead of the traffic leaving the parking area and halfway down the road there was no escaping them. Teeth gritted, I nosed into the end of one switchback, found reverse and backed down the narrow road to the next one. It was steep, and narrow, and the motorhome is no lightweight but the upward traffic waited politely while I backed into the bottom switchback and nosed back out again. Phew!
For 45 minutes we cruised downhill, past our campsite and on another 25 minutes to Golden across the border in BC. It’s a sprawling lumber town, with a nice little old quarter which provided all three of the things we needed: petrol, wifi and food. After filling the RV with the first, we went to the White Mountain Bistro for the other two. It was a cool, calm and collected sort of place, with dark red walls and tall leather booths in subdued light. The menu was interesting and the service was really friendly. Yes they had wifi, so I checked us in to tomorrow’s flight, and then we had salmon and steak and gourmet mac and cheese (with pork belly). Ooh it was good. We were rosy-cheeked and some of our joints were complaining a bit, but it made the food all the better.