Lake O’Hara has been described as the best of the Rockies in miniature. It is a little jewel of a place in the Yoho National Park and access to it is very strictly controlled. You can walk to it, but it’s 12k to get there from the Highway and you can’t stay overnight unless you have booked one of the handful of campsites so that’s 24K without doing any hiking once you get there. During the summer, two school buses set off on the half hour journey down the unpaved Lake O’Hara Road at 8.30 and 10.30, and they are deliberately kept partly empty. To get a ticket you have to get online at 9.00am exactly three months before the start of the season. This year, all the tickets for the entire season were sold out by 9.05. We had three of them.

We spent the night in the car park overflow at the Monarch campground just ten minutes from the Lake O’Hara bus stop, but we had a bigger problem in where we would stay tonight and tomorrow – a Friday and Saturday night in peak season. We needed to be handy for Lake O’Hara, but none of the Yoho campsites nearby take reservations. They are first come first served only. So at 7.15 we pulled up at Kicking Horse Campground check-in and hoped someone would arrive to let us get a site as people were already leaving. Even then we were third in the queue. First come first served is all very well but it doesn’t half muck up your weekend if you have to be at that night’s campground as soon as it opens. We had to leave by 7.55 to ensure they didn’t give our tickets away and of course, no-one showed up at the campground check-in so we had to leave our place in the (now looong) queue with the question of where we would stay, still open.
But first, Lake O’Hara. We got to the bus point at 8.10 and it was freezing. Literally. There was ice over the car windscreens in the parking area. The sun was thin in a milky blue sky and we loaded onto the yellow school bus. The first thing the ranger said when she got on board was “Congratulations! You got tickets!”. There followed a slightly pious lecture about stick to the trail and don’t disrupt the Pika’s nest-building and don’t give your candy wrapper to a Marmot, but then the bus was jostling down the track, with those of us on board feeling a bit like we had Willy Wonka’s golden ticket. 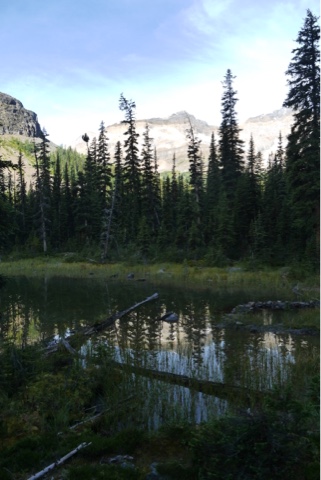 When the bus wheezed to a stop, it was still cold and we could see a turquoise glimpse of the lake through the trees. But we would come back to that so, bundled in fleeces we set out into the woods aiming for an alpine circuit and then a number of other linked trails. We were on our own, moving quietly through still pines on a carpet of moss.

As the sun rose higher, it began to light up the mountains around us. We climbed steadily up a rocky slope, leaving the trees below us. 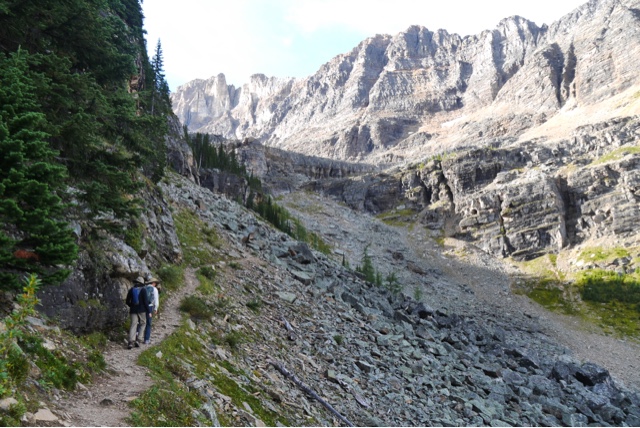 Eventually the path levelled out on the Obapin Plateau. It’s a high alpine area full of flowers and humming with bees. 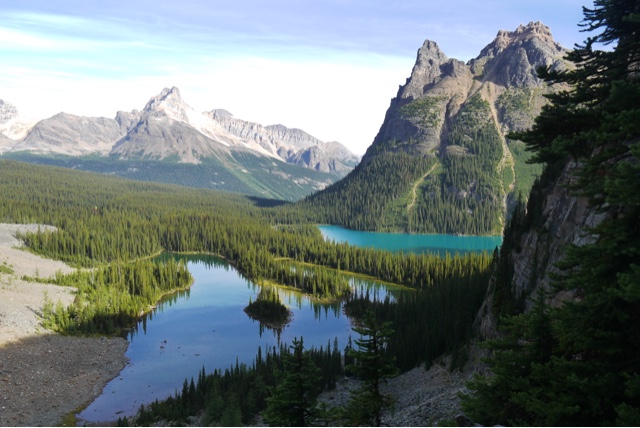 We emerged at a lookout to see Lake Mary shining green and Lake O’Hara a dazzling, impossible turquoise, with snow-flecked peaks all around. It was an absolutely stunning spot and we stayed for ages taking in the views and warming up in the sunshine. 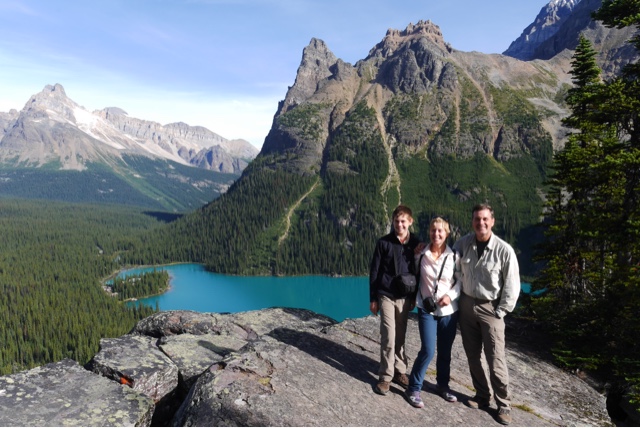 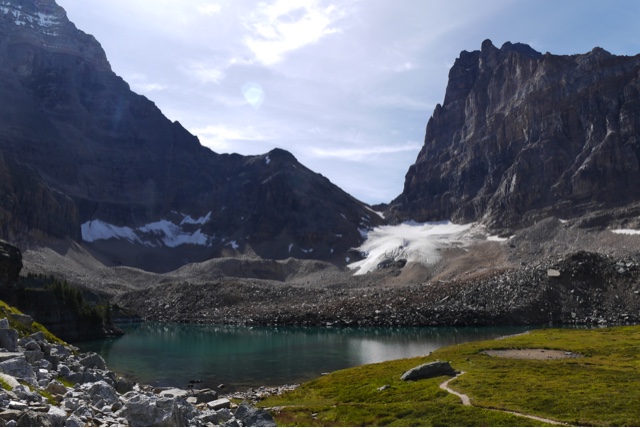 Now we had a decision to make about where to go next. The choices were a gentle amble back down towards Lake O’Hara via another couple of lakes, or an altogether tougher route across the Yukness Ledges along the steep face of Yukness Mountain. We’d read about that route and there was some talk of “head for heights” and “experienced hikers only”. Frankly though, it did look the most spectacular way to go. So we went. 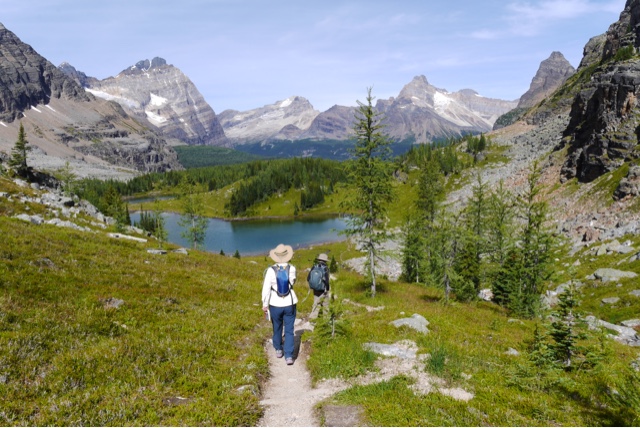 The track was narrow and steep and the dropoff was something that P and I tried very hard not to think about. T was entirely oblivious to it. 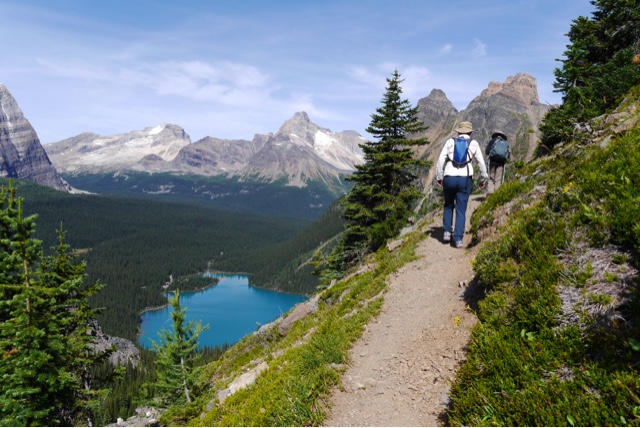 The view down to Lake O’Hara and across the Rockies was endlessly compelling and helped take our minds off the fact that a couple of steps to the left and we would be at the bottom of the mountain in very short order. 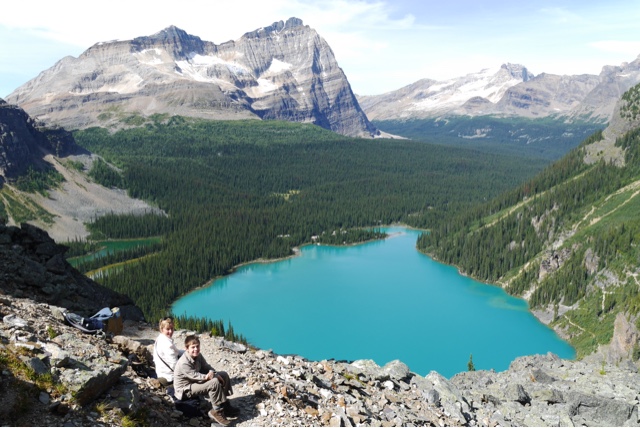 The ledges went on for about ten times the distance we had imagined, but eventually we descended towards Lake Oesa and a big frothy waterfall where it spilled over into a couple of smaller lakes. 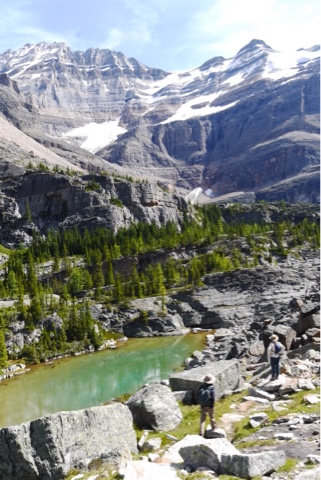 From there we were back in the alpine landscape with pines and firs all the way down to Lake O’Hara. 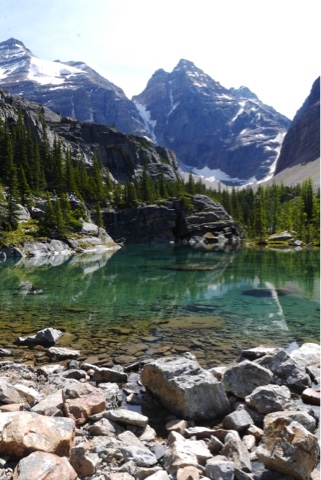 If you have just one day in the Rockies, this is the place to try to come. It is utterly beautiful, sensitively maintained, and largely free of people. Every view is slack-jaw gorgeous and there are so many trails that you can combine all kinds of landscapes in one day. We hiked for five hours and though we were weary as we got back on the bus, we were sad to leave this pristine little world behind.

Back at the RV we still had to find a place for the weekend. We shot back to Kicking Horse campground where we had once been third in the queue and pulled up at the booth. Full, since 11am. “Are there spaces still at Monarch?”. “No” said the disinterested ranger, “It’s full too”. “Is it worth us going on the Lake Louise?”. “Oh there’ll be nothing for you there”, she said, bored. “How about Hoodoos?” Twenty minutes back down the road. “There were 11 spaces there an hour ago” she said with a shrug. She really did not care. I guess she was bored with relaying this information to a whole stream of people. But Yoho, that’s what happens when you don’t allow campsite reservations. It becomes a hideous scramble for everyone.

We raced down to Hoodoos and found, quite literally, the last campsite left in the entire Yoho National Park. Others were there too, frantically circling the sites and looking panicky. We got lucky.
But where we really got lucky was getting to Lake O’Hara. Our Canadian campsite neighbours had never been despite many trips to the Rockies. We met another couple on the trail there who said they had tried every year for many years and never been able to get tickets. They had walked in. It is worth the effort and will be for me one of the overriding memories of this trip. 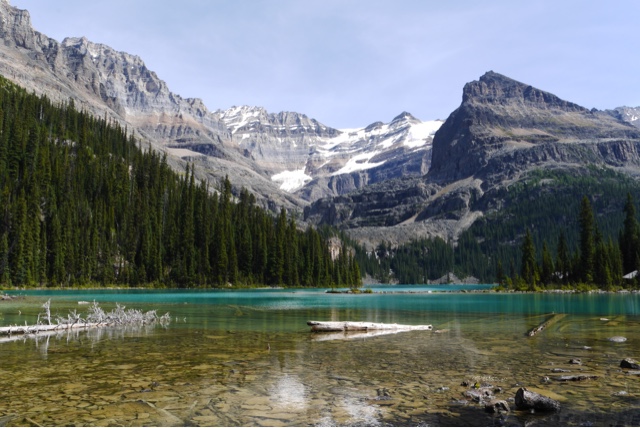