Up, up and away

Lake Louise, we were told, is fairly popular. In fact some ten thousand people go to see the lake every day and as such, all the available parking can be gone before noon.  P and I got up at eight and were on the road by 8.30, while Tom snoozed on for a bit in his bunk. This lasted about five minutes as almost as soon as we left the campground we saw a brown shape in the bushes by the roadside. A big grizzly bear! That got Tom up in a hurry “Mum where’s my camera?!?!” 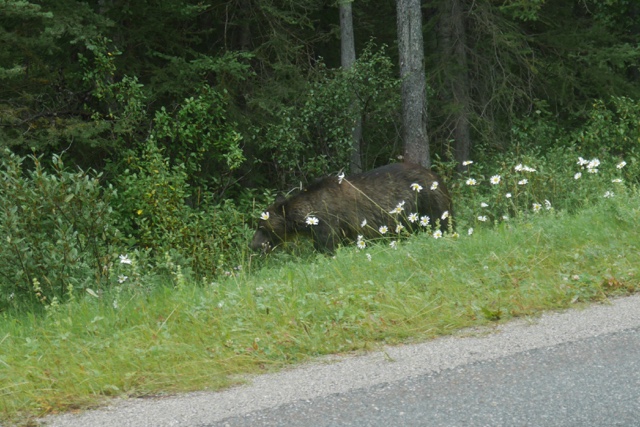 The bear was eating berries, ripping away at the bushes and oblivious to us. It crossed the road slowly, it’s fur shaggy and wet, big head swaying from side to side. What a thrill.
And on to Lake Louise. We got there just after nine and even then were directed to the overflow car park. Once in a space we continued the process of getting up and had breakfast while cars slotted into spaces all around us, filling the overflow car park in about a minute and a half. It was like watching a synchronised driving display.
P made a picnic, I washed up, Tom edited his bear video and we were off. 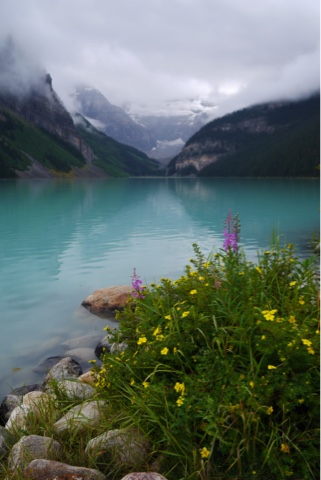 Lake Louise is a stunner, a sheet of milky blue stretching off towards sharp mountains, their ridges packed with great walls of snow and ice. Bright red canoes were dotted across the water like pond skaters. 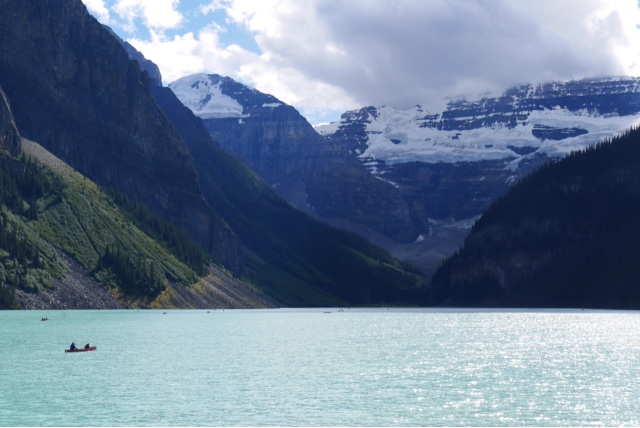 The sun was in and out between clouds and we struck out on the lakeside path before splitting off, leaving some of the crowd behind and slowly climbing through the trees. 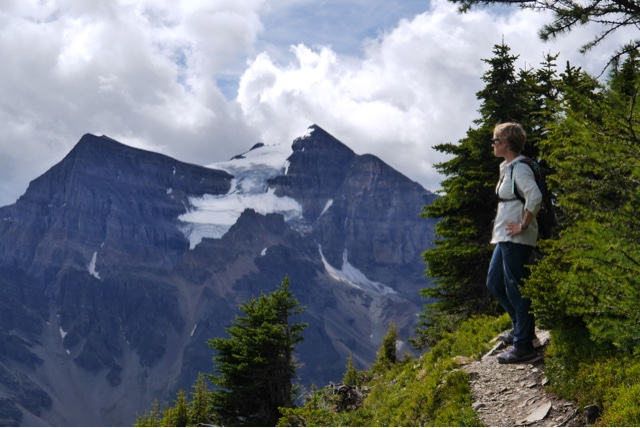 Were weren’t sure exactly where we would go at this point as there is a network of trails that branch off. If the clouds came in we intended to stay low, but the higher we climbed the more promising it looked so we decided to go for the peak of Mount Piran.
This was a barely noticeable turn off the main track, narrow and steep and with apparently no-one else on it. in fact over the next hour or so that it took to climb the mountain we saw just three other people. 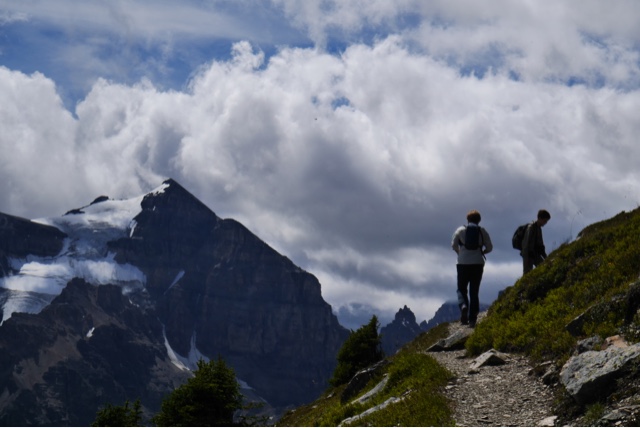 Lake Louise was a blue streak far below as we slogged up the ever steeper track, clearing the tree line and zig-zagging up through mossy scree and rocky avalanche tracks. The last bit was a steep scramble over big rocks until they rounded off at the summit. 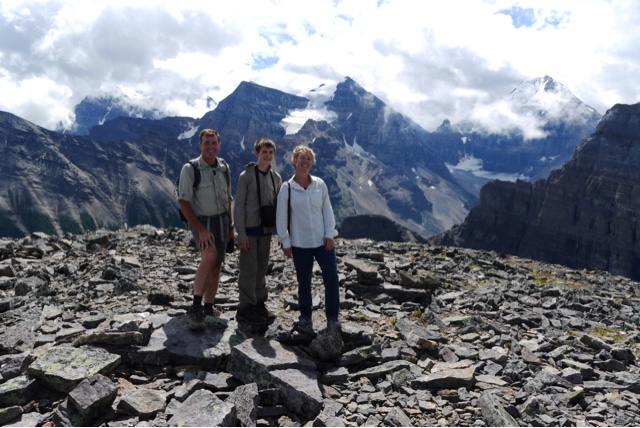 My Garmin said we were more than 8,500 feet up and the all-around view was breathtaking. We could still see down to Lake Louise and the little greenish pool of mirror lake, then snowy Mount Victoria and the other peaks behind it and the other way we could see the white blanket of the Columbia Icefield. Lunch never had a better view. 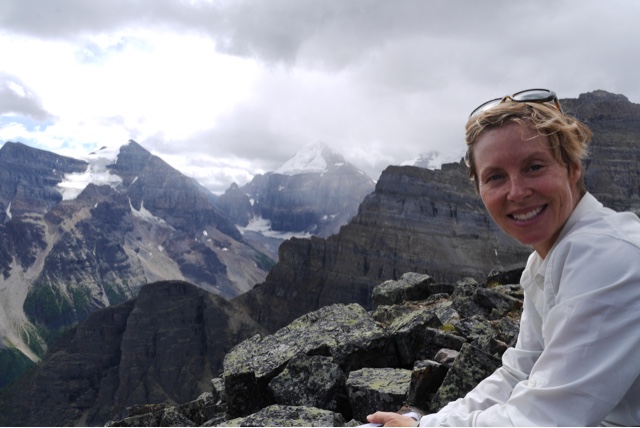 Going down was hard on the knees. For two of us anyway… 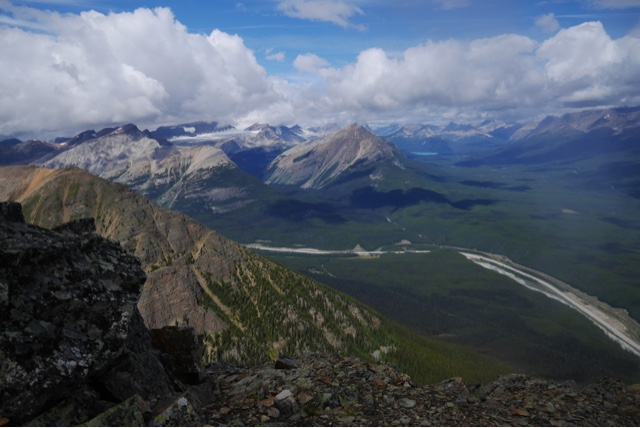 But it was quick and we diverted to the Lake Agnes Tea House, which is an alpine-style wooden cabin in a pretty spot right on the lake shore, three and a half K from Lake Louise. 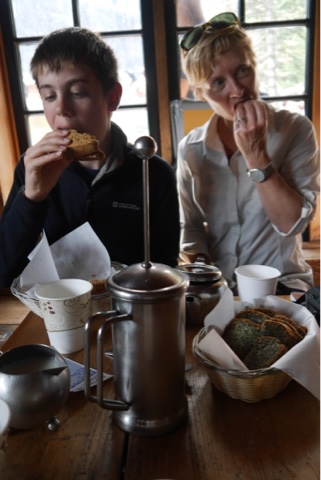 There was a line all the way down the steps which I joined while P and T went to check out the options. A lady coming down the steps whispered conspiratorially to me that “you can only order if you get a table”. And she was right. P got a table, I left the line and we ordered tea and lemon poppyseed cake and a pbj for the peanut butter addict in our midst.

The waitresses were run off their feet but irrepressibly cheery. “Isn’t this a beautiful spot?”.  A ground squirrel had got into the tea house and was running behind the seats looking for crumbs. The waitress sighed. “They’re always doing that. We have to chase them out all the time. Did you see the really fat one?”. The lady next to me said “It’s funny isn’t it. Any other restaurant you went to where there was a rodent running around…”

When we left, the line was just as long. It seemed to be formed of people going up the steps to look at the blackboard menu and then wondering what to do next. While they were doing that, other people came and stood behind them assuming there was some sort of system in play. Which there wasn’t… I suppose we should have made some sort of announcement: “It’s everyone for themselves! Just go and grab a table!” But we’re English. 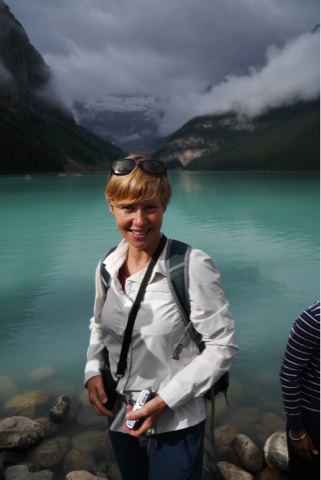 After coasting the final few K down the mountain we emerged at the shore of Lake Louise and a forest of selfie sticks. I have never seen so many Asian tourists outside Asia, and they all, it seems have selfie sticks. You can imagine the photo album. “Here’s me obscuring Lake Louise….and there’s a waterfall behind me in this shot…if I wasn’t in this one, you could see a bear…” etc.
We left Lake Louise and headed north on the Icefields Parkway. Our plan was to go about halfway along it and camp in a site near another good hike. But it was now after six and it seemed likely that most campsites would be getting full, so we decided to stop as soon as we found one with space. The road is famous for its gorgeous, panoramic views and we watched a seemingly endless procession of mighty peaks, and foaming blue rivers.

We pulled in to the Waterfowl Lakes campground which was full but had an overflow 5k back down the road. It turned out to be a simple but idyllic camping area in a stunning location with a river flowing past it. It really could’t have been nicer.

After supper, P and I strolled down to the entrance to pick up a registration slip. As we walked by we noticed two little boys playing who looked just like Fynn and Harrison. “Looks like they are about the same age difference too” said Philippa and we smiled and walked on. And then we stopped, looked at each other and turned to look again at the boys. “Let’s just walk over there” I said and we ambled over. It was Fynn and Harrison. Helen was open-jawed when she saw us. We were all heading to Jasper and had stopped at the same place. It was pure chance that we happened to see them, and lovely to share a sunset and a beer a day early. 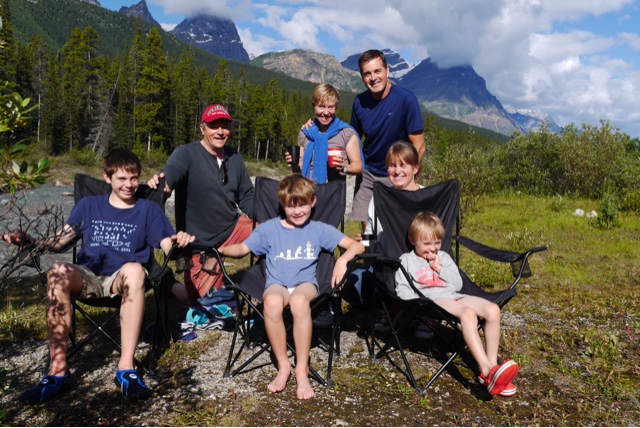