Johnston Creek goes right by our campsite and a little further upstream it has carved out a fine narrow canyon littered with waterfalls. We hauled a groaning Tom out of bed and fed him (and us) eggs, mushrooms and fried potatoes ready for a hard day’s hike. The reason for getting up early was to avoid the crowds as Johnston Canyon is rightly popular, especially since the introduction of a cliff-hugging walkway which gets you up to the most spectacular waterfall about a mile and a half upstream. 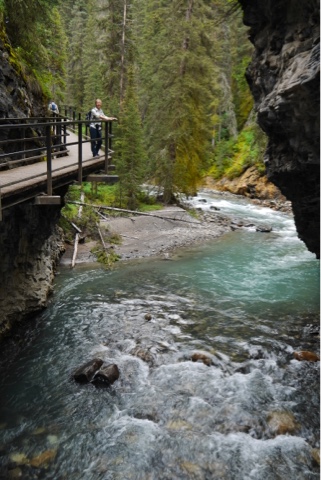 When we got to it there were coach parties already coming down, but the walkway is fun and the waterfalls were tall and frothy after a relatively wet summer. The tallest waterfall has a little cave next to it that you can get to through a short tunnel and emerge to a faceful of spray. The tunnel was created in the 1920s by Walter (um, something) who realised the creek wall was very thin at that point and knocked it through with a pickaxe. 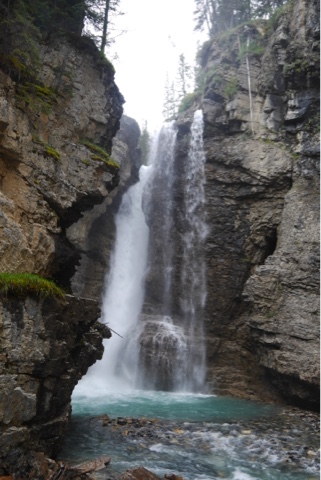 Yesterday’s hot sunshine gave way to overcast skies today but we decided to leave the day trippers behind and walk up the rougher path to the “Inkpots”. These are pools formed by springs which bubble up through silicate mud and are really rather pretty. The walk up to see them was steep and cut back and forth through the trees, before opening out onto a broad meadow with five smallish ponds in various shades of turquoise. Each was crystal clear and every now and then a bubble of spring water would belch up through the mud. 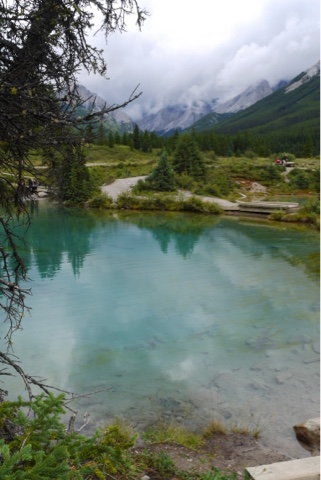 We walked further up to the river for lunch, with a wary eye on the rain in the mountains further on. Valley by valley it got closer, forcing us to bolt down the last of our sandwiches and put on the rain gear before heading back the way we’d come. As we passed the Inkpots, the glassy little pools were splashing with rain, turning them into unexceptional grey ponds. We were lucky to see them when we did.
We tromped back down through the woods and found another trail back to Johnston Creek to avoid the crowds. We were back at the RV by 2 as the rain started to really hammer down. The perfect excuse then for some reading and blogging and tea and hot chocolate and treats of various kinds before supper and then a movie; “Some Like it Hot” as requested by Tom. Marilyn Monroe, Tony Curtis, Jack Lemmon in an old film that never gets old…