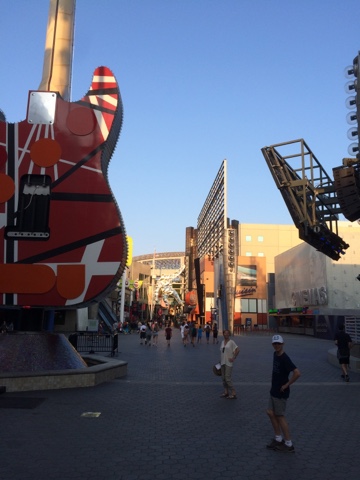 There was one thing we absolutely had to do in LA, because we did it two years ago and it was one of the most important events in Tom’s young life; a day at the Universal theme park. It has to be said that actually, we all enjoyed it the first time around.  The rides are terrific and the whole thing is just so well done that we knew we would be shovelling cash their way again on this holiday.
There is a new area based on the Harry Potter books this year and that came with good news and bad news. The good news was we could enter Harry Potter World park at 7am, an hour before the rest of the park opened. The bad news was that we could enter the park at 7am…  That jet lag cushion has looong since lost its stuffing and after a busy day on Catalina island, that 6am start felt early. And I felt somewhat discombobulated with a woozy head and gripy stomach. But still, we were among the first into Universal and made straight for the Harry Potter section which was truly spectacular; a great recreation of Hogwarts school up on a mountain and the twisty streets of the village, all with fake snow on the roofs. 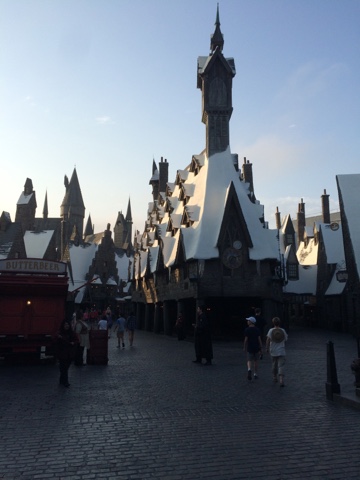 There are two roller coasters in the Harry Potter World and as there was no line whatsoever we did the little one first – twice – which left me reeling a bit… Then we went to the main new attraction: a Harry Potter ride which combines computer effects with good old fashioned swooping about on a hydraulic chair. Walking to it through through the Hogwarts buildings was terrific. They have recreated the book’s moving oil paintings very cleverly, so that you can be looking at what looks exactly like an oil painting and then after a few seconds it blinks, or the head moves. Some of them talk, some don’t and it was fascinating.
Eventually we were strapped into the chair and off we went, swooping as if on a broomstick through the grounds of Hogwarts at great speed. It was as we banked through the arches of the Hogwarts castle while Death Eaters snapped at our heels that I began to feel Not At All Well. Head spinning, stomach churning and general nausea. From here on I really couldn’t care less whether we got caught by the Death Eaters or not. In fact I would have stopped my broomstick and handed myself over to them if there was a chance that my head would have stopped spinning.
It was a walk to the next stop – the Transformers ride that we all loved last time. It’s all CGI and hugely dramatic through the 3D glasses. My head had cleared a bit but once we got going I realised this was a big mistake… I have rarely felt so sick. P and T were whooping and laughing and I was turning green, longing for it to stop. Thankfully there was nothing that required a cleaning crew (nearly) but I couldn’t get out fast enough and had to sit out the next couple of rides.
We all met back up for the Universal Studios tour which is a firm favourite. The tram took us first down the street where Tom had been filming a few days earlier and then around some of the iconic locations like the Bates Motel. 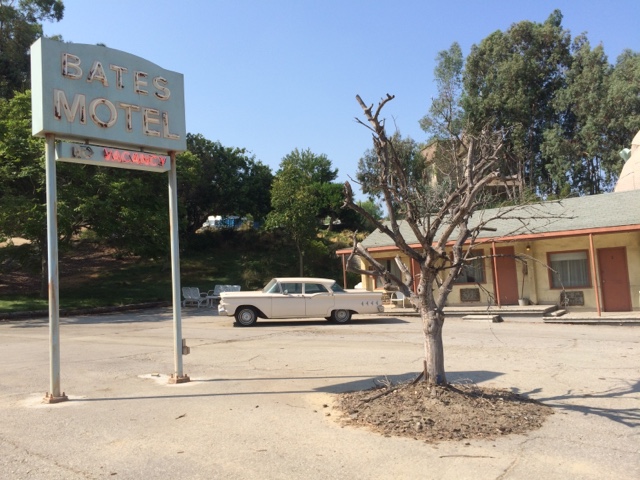 We went past Hitchcock’s old office and the Jaws tank and the 3D King Kong tunnel and it was all great fun. 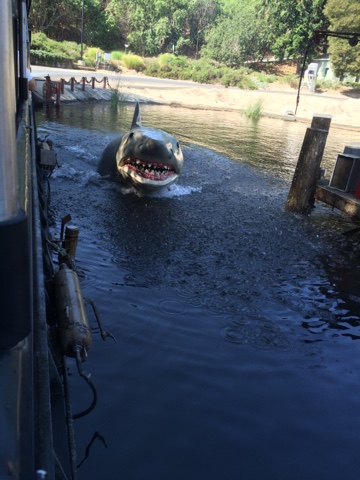 Tom’s favourite was possibly The Mummy roller coaster which swoops about in near darkness, stopping at a crest and doing it all again backwards. He went with P first while I was, erm, indisposed, and took me in it later. 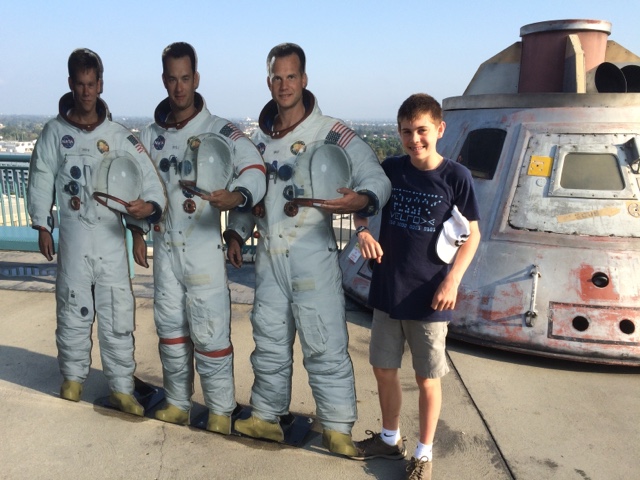 We spent ten hours riding, eating, getting soaked, riding something else and getting soaked again. Philippa’s tracker said we walked four miles while we were there. The temperature was in the nineties and when we could take no more we staggered out to cool off at home, and have supper looking out across the city.