By Richard ListerAugust 6, 2016
Philippa has no hiking boots. Which is a problem if you are, as we are, about to head to the hiking Mecca which is the Canadian Rockies. We’ve been trying to find some boots for her, but our first “outdoors shop” was actually mostly about killing things outdoors with guns. The only boots they had would have made Philippa look like she’d joined a militia. Other places we tried had only trainers, so she found a North Face on the internet that was half an hour’s drive away and off we went.
I suppose we should have realised that the Beverly Hills North Face may have been less about grunty hiking and more about looking good at your ranch in Wyoming and sure enough they had precisely one pair of women’s hiking boots complete with purple accents. But we’d had enough by this stage and they fitted so she bought them.
We’d also booked spaces on a two hour walking tour of downtown LA. So back across town to the park and ride by the metro near home where we found that while you could ride, you couldn’t park. Nope, not a single space. So we drove home parked and walked fifteen minutes down the hill into Hollywood proper with the stars on the pavement and in everyone’s eyes, and got on the metro there. Incidentally this is the second time we’ve stayed in Hollywood and we still haven’t done all that Walk of Fame stuff yet so we’d better get a move on…
At Pershing Square downtown, we rejoined the surface world and grabbed a fish taco at the old covered market which was packed with people eating many things, from many stalls. 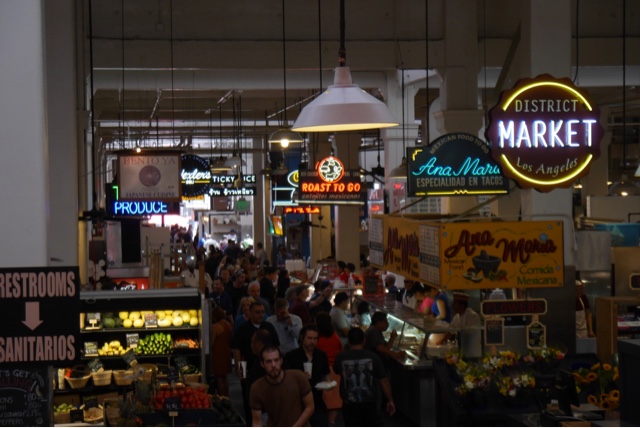 Across the street was the old Angel’s Flight incline railway – the shortest in the world, it says. But the trip is particularly short now that mechanical issues have kept it closed for several years. Here was where we met our guide. Neel Sodha was born in Swansea and moved to the US when he was five he said. Presumably, not on his own. 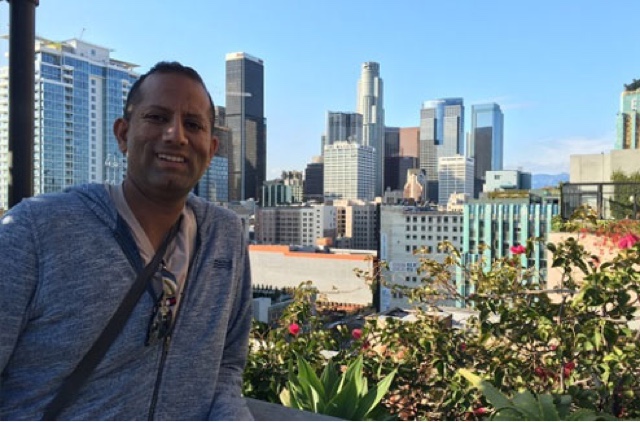 His ears pricked up when we told him where we are living. “Only thirty homes have access to that elevator key” he told us. He now lives downtown and is hugely enthusiastic about the area. He was a fount of knowledge; explaining that LA is mostly fairly low rise because after the first thirteen story block went up in the early 1900s, the city shuddered and said it did NOT want to be another New York thank you very much, and capped the height limit, which remained capped until 1956. 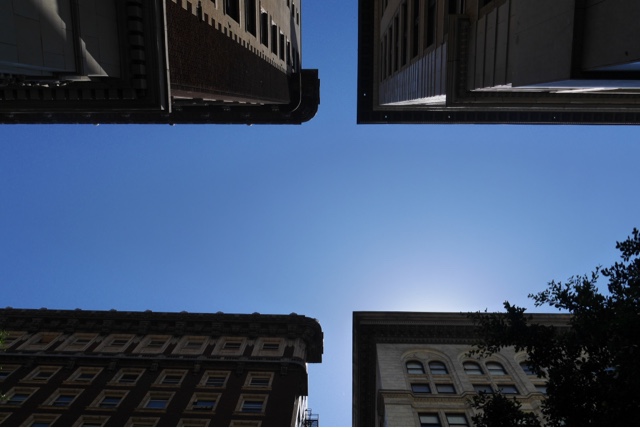 Other zoning regulations and fear of earthquakes kept the biggest skyscrapers at bay until relatively recently. Now though, says the LA Times, they are set to soar with abandoning of the requirement that they must all have helicopter pads on the roof.
Our walk took us past some of the many old but little used movie theatres downtown including one formerly owned by Charlie Chaplin. 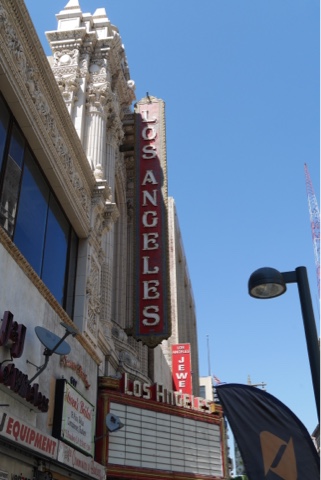 This area we were told, was actually where the Oscars were invented and awarded and where movies premiered.

Sid Grauman established his first LA movie theatre downtown, but eventually relocated the Oscars to his Chinese Theatre in Hollywood. He was an interesting chap having gone as a child to the Yukon with his father during the gold rush. They didn’t find any gold but the they became successful putting on entertainments for the miners and that experience in the Yukon lead directly to the red carpet hoopla we know so well today.

In the 1980s the downtown “Skid Row” area was a ghetto for the homeless. Other cities were sending their homeless people to LA on buses and the centre of the city had no commercial life. But the city began to regulate the situation, confining the homeless to a specific area and offering low rents to pop-up art galleries, which brought people back into the city, which brought all the things hipsters like: coffee places, funky eateries etc, which eventually got people interested into turning some of those 150′ buildings into apartments – a process which continues today.

But LA still has one of the largest homeless communities in the US – around forty thousand people live on the streets and in tent cities all along the roadside in Skid Row. The transition to gentrification still has a long way to go.

Some streets are little changed from the 80s with destitute men hanging out in front of cheap store fronts, in buildings where the upper stories are all empty. There were lots of interesting places that we’d like to go back to though and it is a part of the city which still has a defiant, distinctive character about it. Incidentally, “Skid Row” was originally “skid road” where loggers pushed tree trunks over greased skids towards the river, and hung about “on the skids” waiting for work or for a ride back to the logging camp.
There were lots of little titbits on the tour – including an old Cold War air raid siren, and the metal rings embedded in building walls which used to hold up the tramway power cables. There were once 20 lines and more than 1200 trolleys but Firestone Tyres, Standard Oil and General Motors got control of the operation and replaced it with buses. All the tramlines were ripped out. 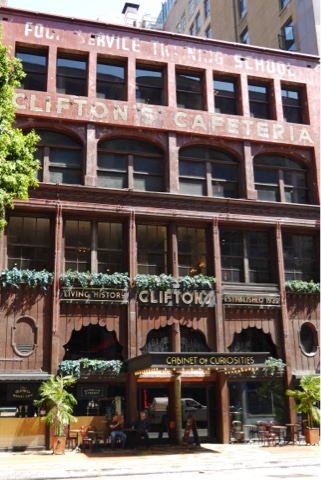 The Clifton where you only had to pay if you could afford it. Neel told us it served a million free meals during the Great Depression. 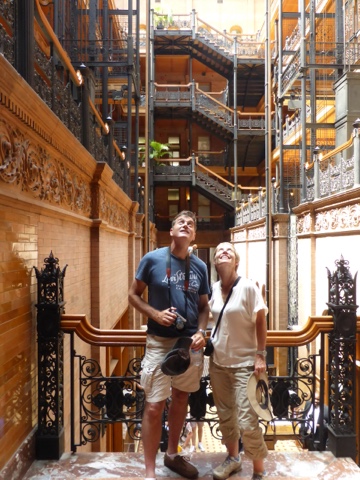 The Bradbury Building, where bits of Blade Runner and The Artist were filmed. It’s stunning and was saved from demolition in the eighties.
Our best spot of the day was the old Warner Theatre in the diamond district. We went through glass doors into a modern looking retail area and walked to the back where some of the stall holders had set up on the floor of what was once a grand theatre. No photos were allowed amid the diamonds but the theatre boxes were still in place along with the beautifully painted and gilded interior, soaring over the rather shabby stalls below. It too was like a scene from Blade Runner.
Back at Pershing Square we said goodbye to the ever-enthusiastic Neel and got the metro home. Tom had pleaded for a Drive-In movie and it seems that LA has just two of these places left. Both a notional half hour from home. Not at rush hour though. We crawled through the city and two hours later we were the first into the giant lot at the Paramount Theatre, armed with too much pizza, bought from a well regarded local place a few blocks away which was just about to close as we got there. 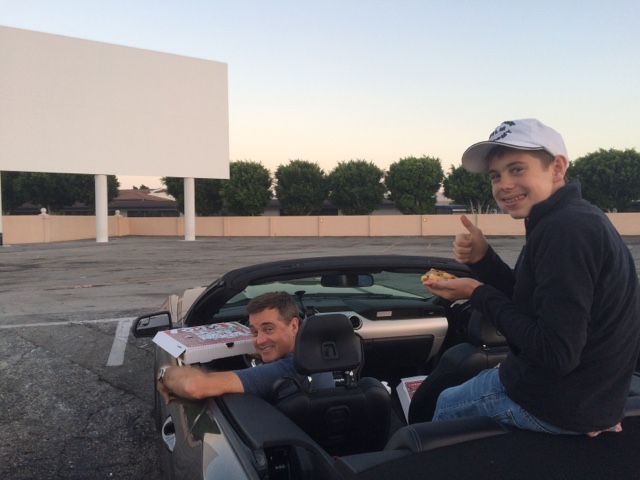 The Paramount had been closed for twenty five years until renovated and re-opened fairly recently. 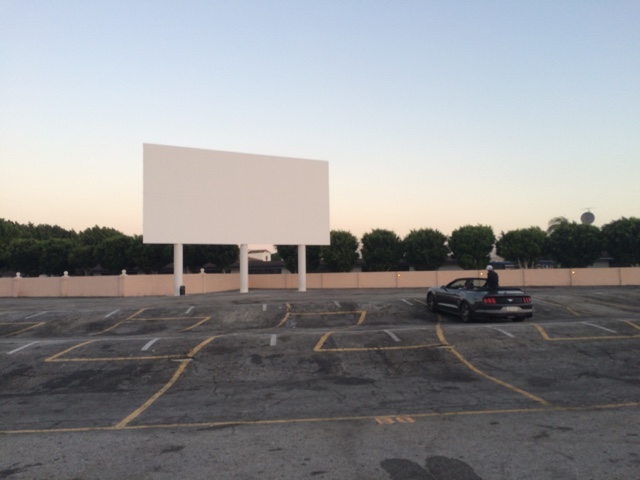 (More people did arrive eventually…)
We put the top down, put fleeces on and ate too much pizza while watching Jason Bourne do his stuff on the big screen in a blur of editing that was way too fast for the human eye. If you haven’t seen the fourth movie in the Bourne trilogy, we’d suggest the new Star Trek instead…
It took half an hour to get home though the Freeways are always frantic, even at 11pm.