After walking and driving for about 29 hours yesterday, we decided today was going to be quieter. Not for Tom obviously who we shipped out to Film School in short order ready for a full day while we sloped back to the house. By 8.30 we were sitting in the shade of the side-deck by the kitchen with cups of coffee, novels (her) and this blog (me). 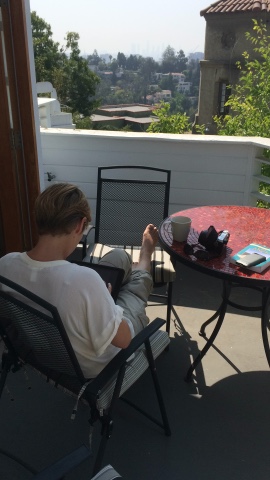 And so the morning progressed, with little more movement than sliding the chairs out of the sun when it got too hot. We had thoughts about a hike somewhere, maybe a bit later… And wasn’t there that gallery..? And we could always go back to the Huntingdon..? but in the end, here was where we stayed.

This house was a great find, and it seems that we will be the last people to rent it for a holiday. It’s being leased long term from now on. This area really does have a distinctive atmosphere; a little pocket of 1930s charm quite hidden from the rest of Hollywood, as much of it is inaccessible by car. 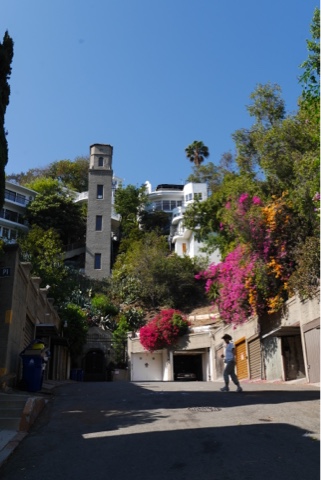 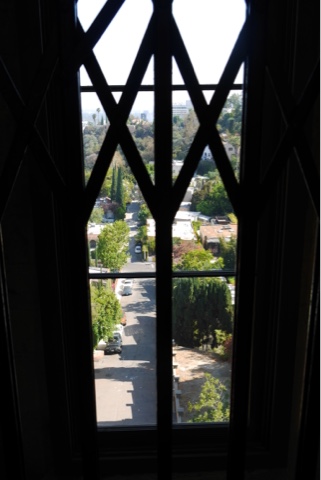 We feel to have been let in on a secret. Michael Connolly lived in one of these houses while he was writing one of his crime novels set in Hollywood. Bette Davis lived down the lane too.
After extracting Tom from the excited bubble of boys bent over their screens outside Film School, we went back down that lane to the Hollywood Bowl. It’s been magical to be so close; to have the big spotlights over our house every night and the musical performances drifting over the ridge and in through the window. 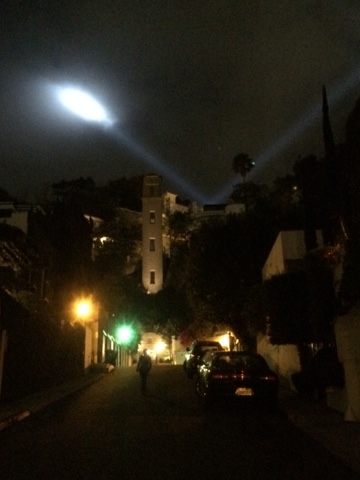 We heard Gladys Knight belting out her hits the other evening. We have tickets tonight though, to the LA Symphony which is playing Tchaikovsky under the baton of Gustavo Dudamel who has become something of a celebrity here.
We walked down the hidden lane after sunset; by clapboard porches strung with fairy lights, crisp modern cottages with manicured gardens and the sad, sagging wooden house where the architects of Grunge once lived. 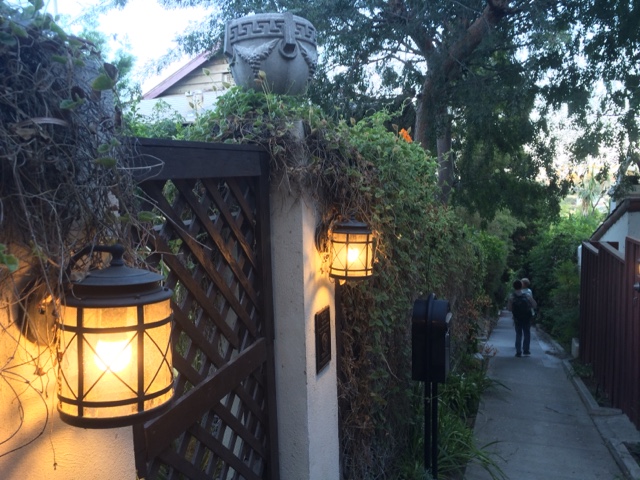 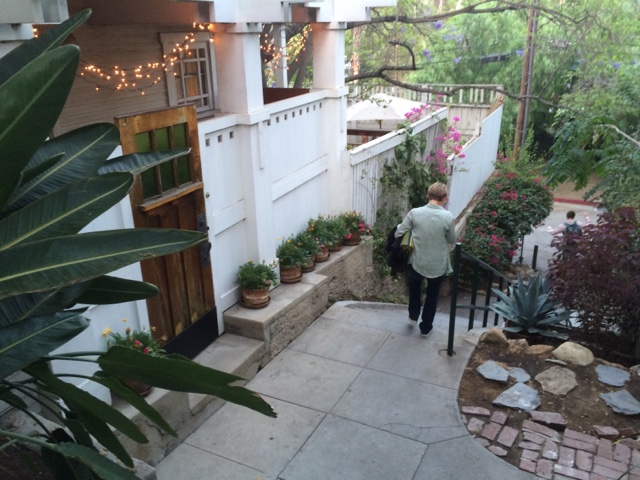 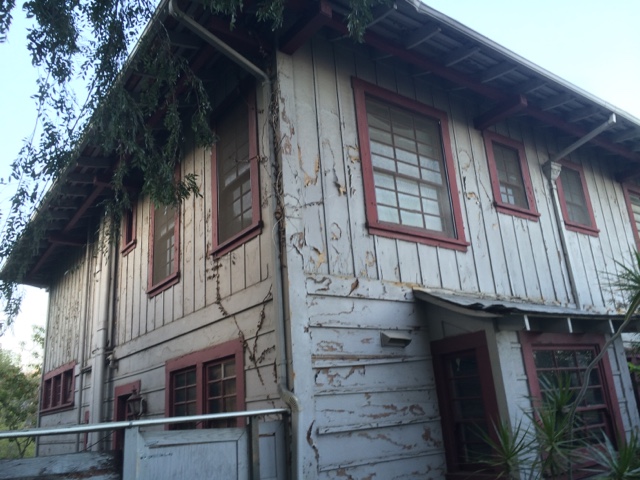 Slipping through a wrought iron gate at the bottom of the hill into the Hollywood Bowl parking lot we joined the happy tide of people heading to their seats. Anna and Coll and the girls met us inside and we snaffled down a picnic (along with everyone else) before the concert began. Well mostly anyway. Tom and I had just helped ourselves to a handful of chips and dip when the concert suddenly started. That would have been fine apart from the fact that the opening performance was incredibly quiet and subtle and we had mouthfuls of the crunchiest snacks known to man. We finished them by chewing in slow motion and then quietly retired the Dorritos.
The Hollywood Bowl is a really special venue. Sitting in on its wooden bench tops under a darkening sky, with the arched stage area subtly lit in front of you is an experience all on its own. 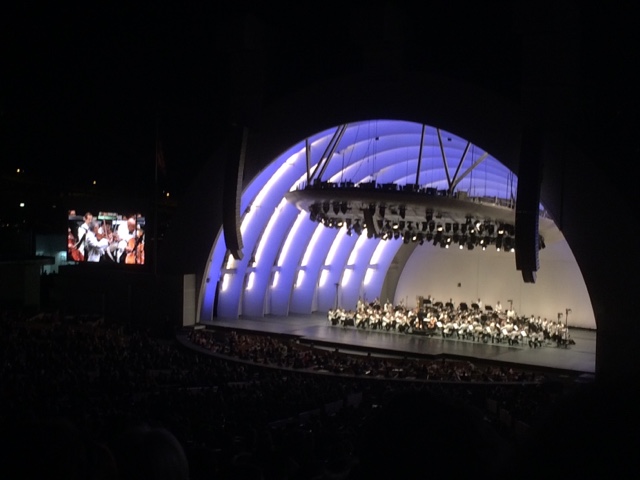 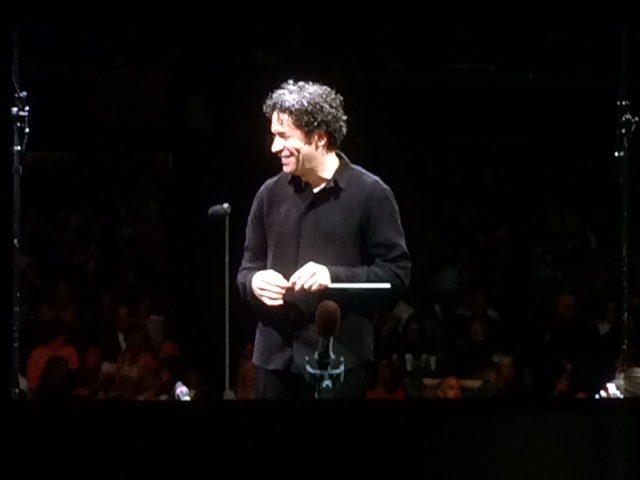 The concert was terrific and for the finale – the 1812 overture – a marching band joined the orchestra on stage for extra oomph, and then fireworks over the stage brought the whole thing to a booming crescendo. A magical night. 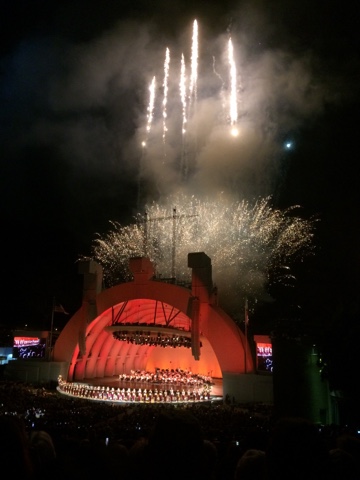