By Richard ListerAugust 1, 2016
Tom was excited about getting started this morning. We had breakfast with sunlight punching through the curtains and the tower blocks downtown making a ghostly appearance through the morning haze. Jet lag has made getting up early relatively painless and we were in the car before eight; top down and threading through rush hour traffic in the cool morning air. It’s a ten minute racetrack drive to the  New York Film Academy building on Riverside and it felt familiar. The route goes past the Warner complex with its iconic water tower and hangar-sized sound stages. There is a real buzz to driving past places where so much of the world’s entertainment is being generated.
Sitting in a cool screening room at the NYFA we got the lowdown on the course, and then the students were lead off to start work. P and I lead ourselves off to start shopping. We drove to a mall so vast that after we had parked we found that the actual clothes shops were a trolley bus ride away. There was also a “walking trail” to get there. So we did that and discovered – as our feet melted into the tarmac and the trail sort of faded away into an ornamental verge – that in LA, people take the trolley bus.
We wondered around the air-conditioned retail village dazzled by too much choice and not quite knowing where to start. But barring a curious and quite literally fruitless lunch stop in which the rictus-grinning waitress was always going to be right with us but never actually was, it was all very successful. Everything went onto credit cards so we never actually have to pay. That’s how it works isn’t it?
We were back in time to pick up the boy who was chatting away with others in his group and looking quite the American Teen. His first project is to make a commercial and he spent much of the evening mapping it out. 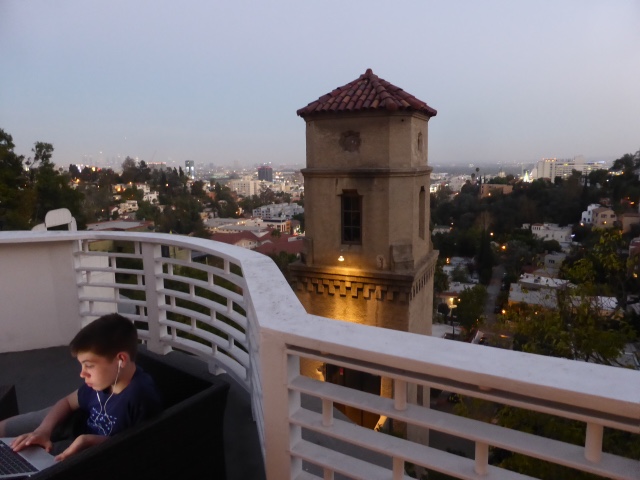 We had supper on the deck looking out over That View. As the air cooled we went inside to watch the wonderful documentary Man on Wire about Philippe Petit’s unauthorised walk on a high wire between the World Trade Centre towers in 1974. It is such a joyful film and a sent us to bed smiling.