By Richard ListerJuly 30, 2016
We woke to clear blue skies this morning which Coll said was a marked contrast to yesterday morning when the sky was full of smoke and ash from a forest fire in nearby Santa Clarita. Some 20,000 acres of scrub have already been consumed and only a fraction of it is under control. It reminded me of covering forest fires for work years ago and meeting burned out residents who were about to start building again on the same plots of land. They seemed to take it in their stride.
Santa Monica beach was ten degrees cooler and we lugged boogie boards and towels and the makings of a picnic. 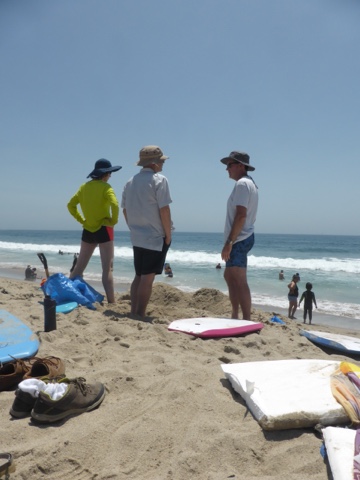 The surf was big and poundy and Tom was in the sea with a boogie board in an instant. 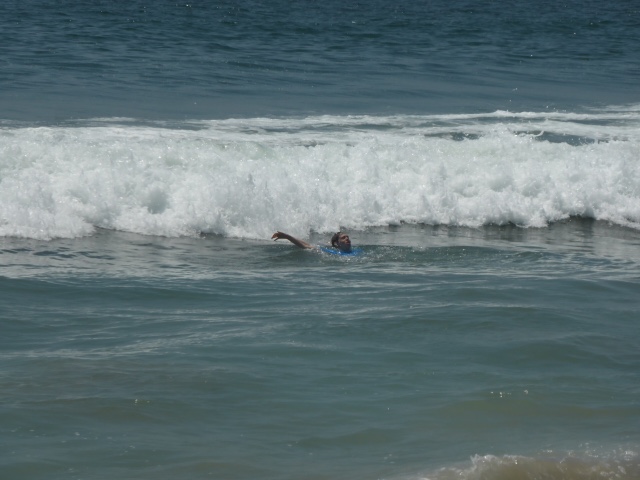 Coll, who is a surfer, was the only one to really catch a good long ride but Tom and I tried until we could swallow no more seawater. Tom got a bit of a beating from one wave which drove the board against the rib he bruised in the airport yesterday. That incident was a classic comedy moment, if a painful one. He was walking along next to Philippa (who was in a moving walkway) and talking to her at the same time. He didn’t see the chest high metal post and walked right into it. Despite the pain, he could see the funny side and was alternately laughing and groaning.
We had sandwiches and fruit on the beach, feeling sun-kissed and wind-blown. It was probably a good thing that we had to go and get the keys to our holiday house as the sun was fierce.
2187 Broadview Terrace is in the Hollywood Heights neighbourhood, just over the ridge from the Hollywood Bowl. 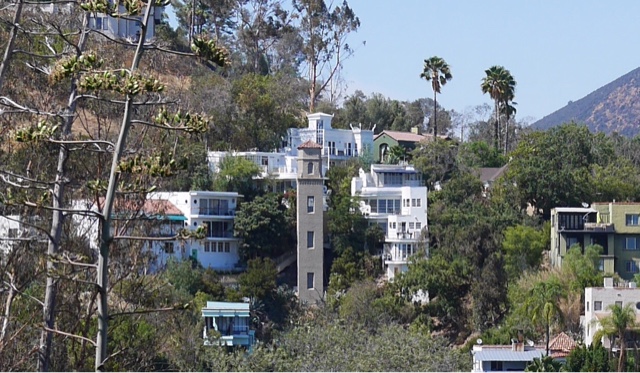 It’s in a wonderfully higgledy-piggledy maze of narrow pathways which climb the steep slope and ours is one of four distinctive houses built in 1937 which look rather like part of the curving white superstructure of a classic ocean liner. As well as the steep pathways there is a magnificent elevator tower built in 1920 in the style of Bolognese campinale, with a pointed tile roof. It houses a rattling cage-elevator which is apparently the last of its kind in the city and can be repaired by only one company. It’s featured in at least three movies: Dead Again, The Long Goodbye and The High Window and it appears in a number of Hollywood novels too including a couple by Michael Connolly. The top of it is also bang smack opposite our roof terrace, with downtown LA sweeping out behind it. Immediately below us looks and feels like an Italian village; a jumble of small houses in warm pastel colours with thick roof tiles spilling down the hillside. Somewhere in here is Frank Lloyd Wright’s first project too. We shall go and look for it.
As the sun became more golden, a brace of large Hawks circled the elevator tower. There are hummingbirds darting into the foliage too. Anna and Coll and the girls stayed for a barbecued supper as the sunlight faded and lights started winking on across the city. 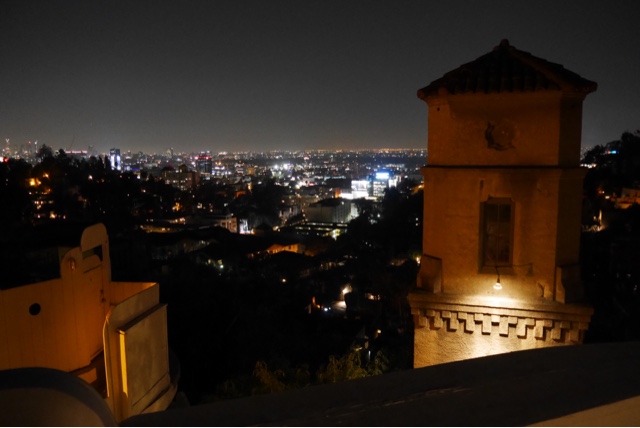