By Richard ListerAugust 29, 2014
Yesterday we had a day around the house and went back to our beach for another snorkel. The tide was out revealing the lumpy brown reefheads and the waves had churned up the seabed making the water too milky to see anything. So we walked a little way along the shore watching the tiny fish flitting through the pools at the water’s edge. The sea on this beach is never less than rolling; big blue breakers sucking up the water ahead of them and crashing down into the sand. Its fun to swim in but there is an undertow to watch for – P and T found they were beginning to get stuck the other evening when only about fifteen feet from the shore. We swam in the warm water and blatted a little ball to each other (record: 20!) until we all got too hot and retired to the house to read (and blog) in the shade.
Today though we were ready to explore again and headed for Tunnels Beach a forty five minute drive along the north coast. This coast to my mind is what Kauai is all about. The communities are low-rise and unpretentious, the jungle foliage either side of the road is green and dense, the beaches have an untamed quality to them and soaring up over the sea are jagged sharks-teeth mountain peaks. This is the Napali Coast and its gorgeous. 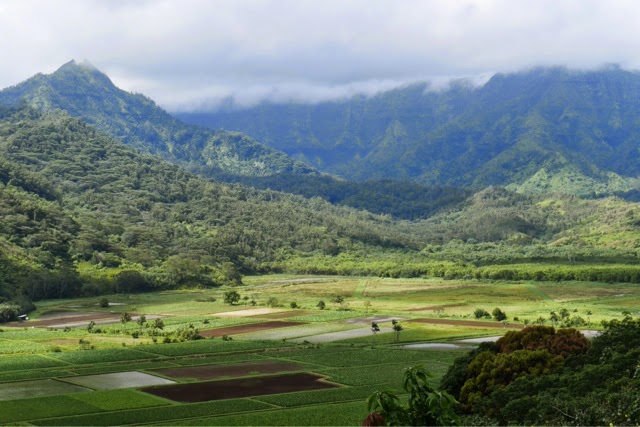 Tunnels Beach is one of the most famous snorkeling spots in the islands and once again we found it by guesswork as there was not a single sign anywhere to announce its presence. Hawaii’s motto should be “Don’t worry, you’ll probaby find it on your own”. The beach is famous for a long reef which is protected from the waves by another reef further out. 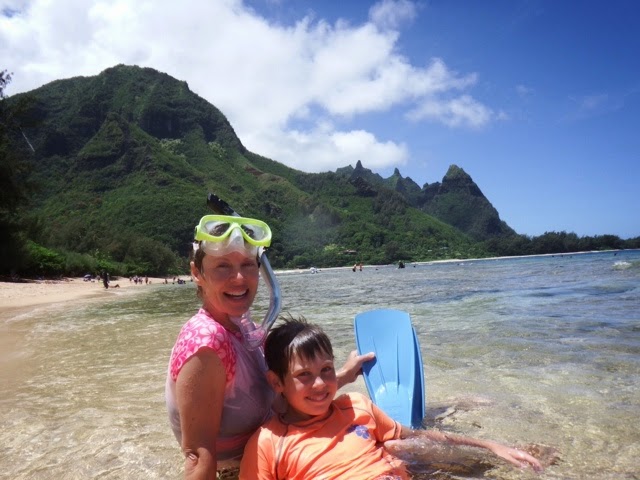 You can swim through the inshore reef  – even at low tide – via a series of sandy avenues. The water was sparkling and clear and the fish were plentiful; from darting little electric jobs, hiding in the crevices, to fish as big as tea trays gliding around in small shoals. We all spent about an hour exploring – feeling like we were in an aquarium. P almost stepped on a turtle. 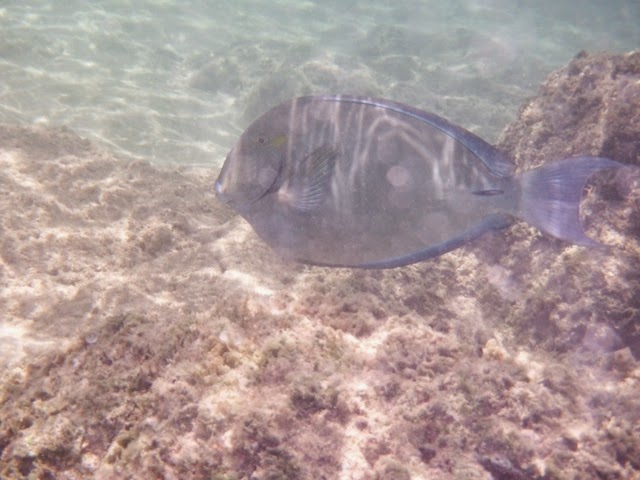 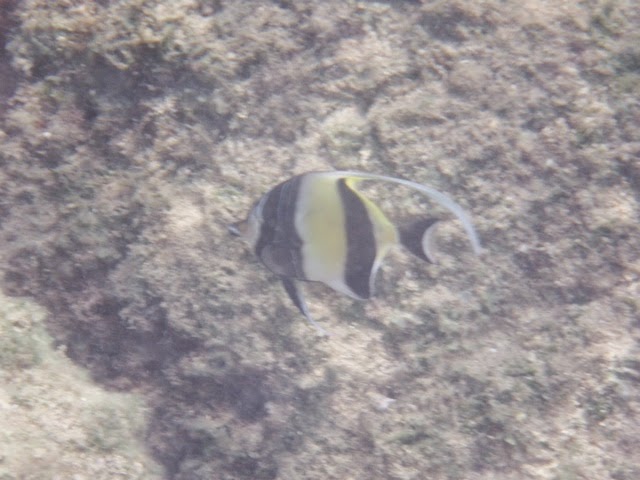 Further down the beach where the reef stopped, the waves were crashing in and Tom of course had to have a go with that… Some of the waves were at least two feet taller than him and he was picked up and thrown back down on the sand again and again, laughing all the time. 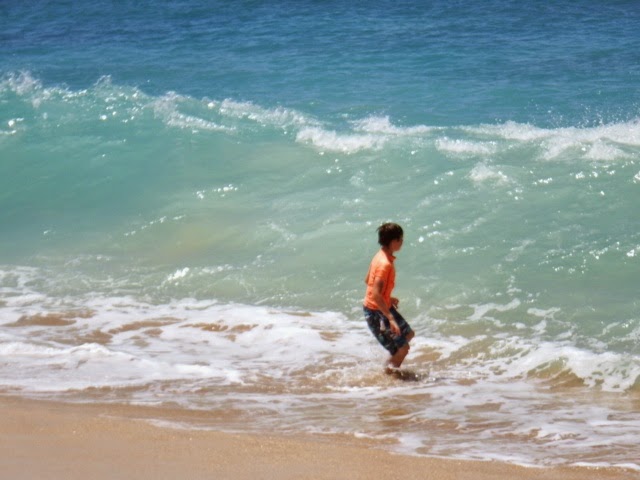 He spent at least another hour being hurled around and would have stayed longer had P not brought back some sandwiches from a caravan in the car park. 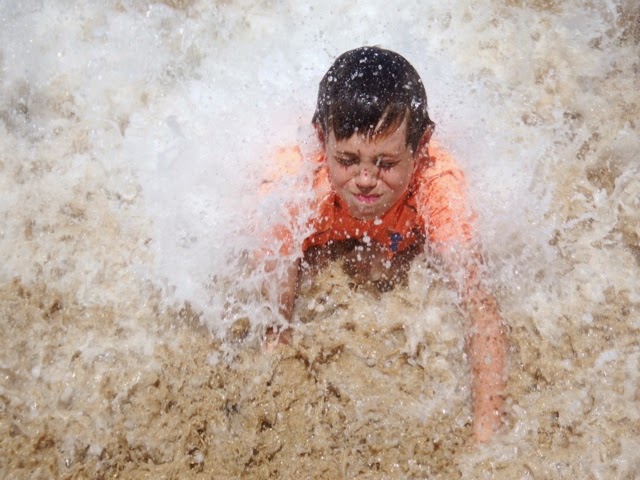 The sun was fierce and we’d all spent rather too long in it – feeling distinctly crispy around the edges. So, back to the jeep and down the coast to the very end of the road and Ke’e beach. It was clearly once a perfect little hideaway with a half-moon of golden sand and its own reef to explore but now everyone knows about it. And everyone was there.
The end of the road is also where one of the most spectacular walks on the island begins – the Nepali trail which skirts the most rugged of the island’s scenery for eleven miles. Its a tough hike and not one for today – we were too hot and it was too late, so we did the first half mile to a viewpoint. It really was baking hot and a steep climb at the start. 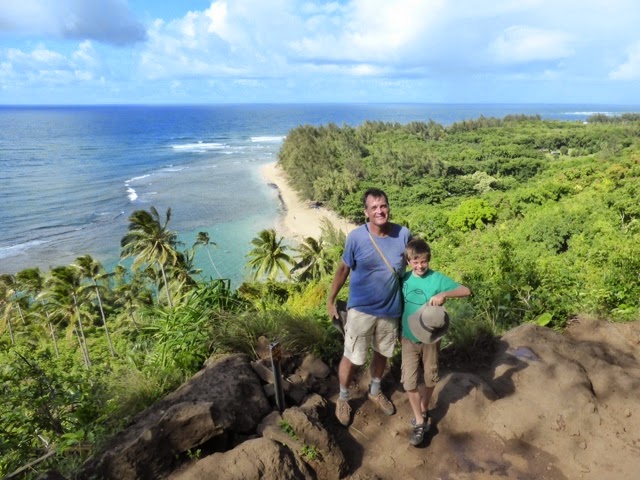 As it was late afternoon we passed dozens of people coming the other way and its clear that had we started the trail this morning we would have had a lot of company. We stopped at a kink in the trail where we could look down on the golden coastline on one side and the sheer cliffs, furrowed and green, on the other. 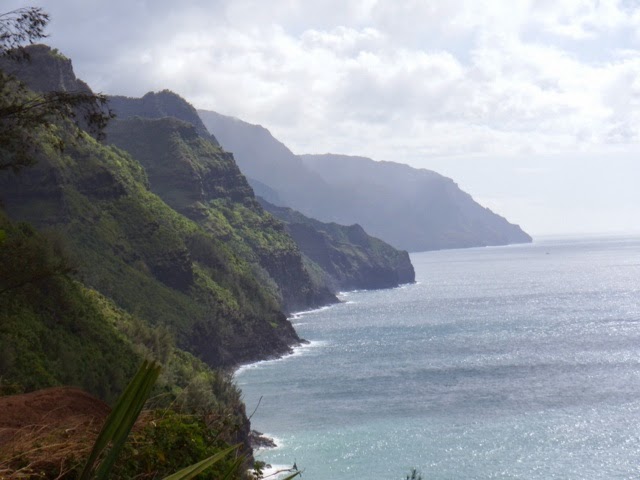 The sun was sinking in the sky but it was still fiercely hot and there was a stiff warm wind. We sat for a bit enjoying the view when out over the sea we saw a rainstorm heading our way. Having played this game before, we decided it was time to go. We retraced our steps along what was becoming an increasingly slippery path as cold raindrops began to spatter our backs.
It soon passed and we stopped at the food van again for a huge multi-flavoured “shave ice” which is a bit of a Hawaiian institution. Then we poked around in an enormous cave carved out by the sea many years before. It was a huge space, cool and silent, It was rather eerie to have this great weight of mountainside propped up over our heads. 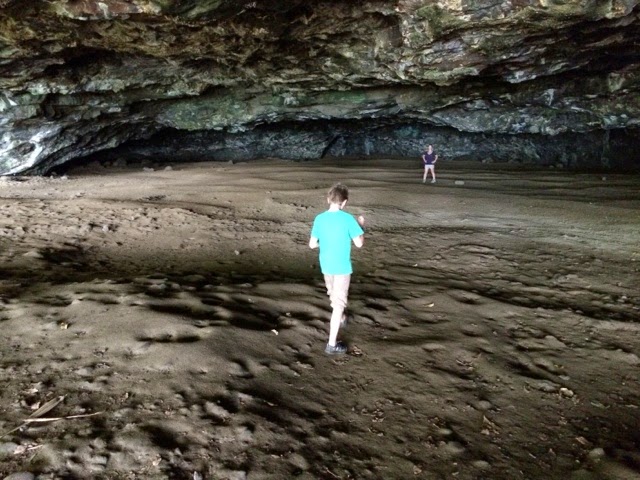 On the way home in Hanalei we stopped for supper at “Tahiti Nui”; a place described by the guide book as looking like a bit of a dive but with great food. It was correct on both counts. Inside there were boozy twenty-somethings cackling at the bar and music playing rather too loudly. We sat on the porch, on split and ancient vinyl-topped bar stools which stuck uncomfortably to our sunburned legs. But across the road the mountains loomed over us and the sun was still sinking dramatically through fluffy pink clouds. 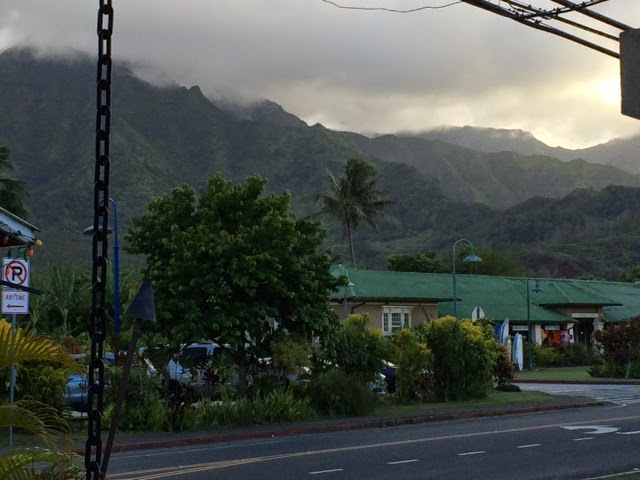 Inside, the music stopped and we watched through the open sides of the restaurant as a huge man got on stage to play a tiny ukelele and sing traditional songs. The guitar looked like a toy in his meaty hands but he played and sang very sweetly and for a couple of songs a composed young woman danced next to him in the traditional way, swaying slightly with hands moving slowly and precisely (it looks to me rather like Balinese dancing). 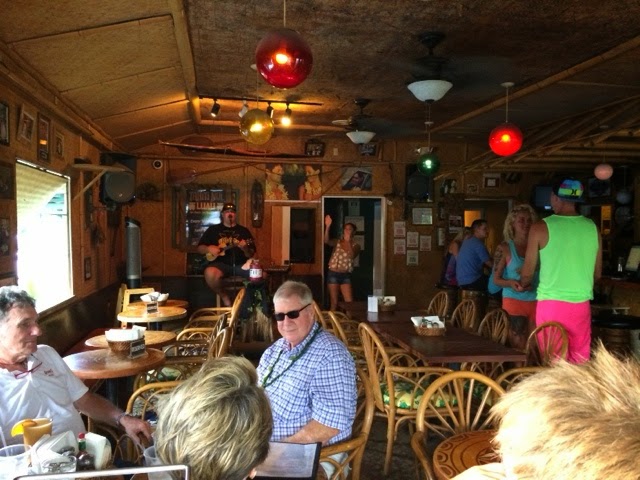 The food came and it was terrific. P had perfectly seared tuna and I had big fat Kauai shrimp cooked in macadamia nuts and honey. T finally got to have a Hawaiian Pizza (ham and pineapple) IN HAWAII! 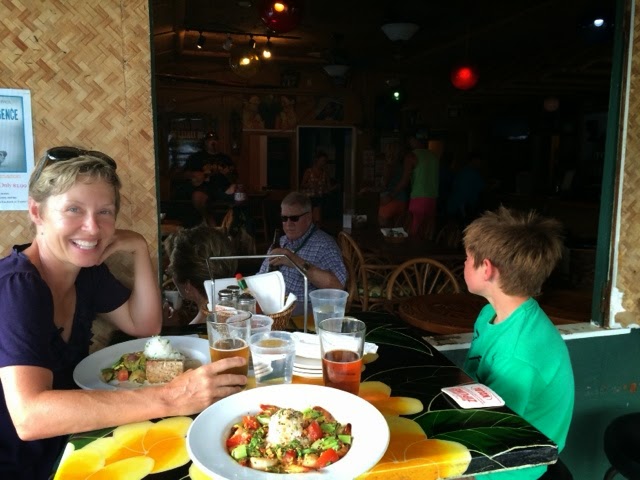 It was a good last night in Kauai and seemed to sum up what’s great about the place: epic views, interesting local culture and not overdeveloped. Rather than sell its soul to tourism it has retained a sense of frontier character. Everyone is welcome, but on the island’s own terms.