By Richard ListerAugust 26, 2014
Kauai is in fact one of the wettest places on earth. Parts of it – and I am not making this up – get thirty seven feet of rain a year. The forcast for the time we are here is pretty much the same every day, a lively combination of sun, cloud and thunderstorms. Sometimes the rain misses us completely, but today was not one of those days.
Hankering for another tough walk in the mould of Haleakala, we struck out for Waimea Canyon. It is only a quarter of the way around the island from us anti-clockwise, but its the bit of the island where the road doesn’t go. Getting there entails a clockwise drive of about ninety minutes through small beachside communities with flat fronted clapboard buildings. Then it heads high into the hills.
It rained on and off all the way and when we got to the trailhead there was a sign saying the middle bit of the walk we wanted to do along the Na Pali cliffs was closed. This turned out to be a good thing because it meant we would walk only about six and a half miles instead of more than eleven, and the weather was frankly not ideal for a stroll. 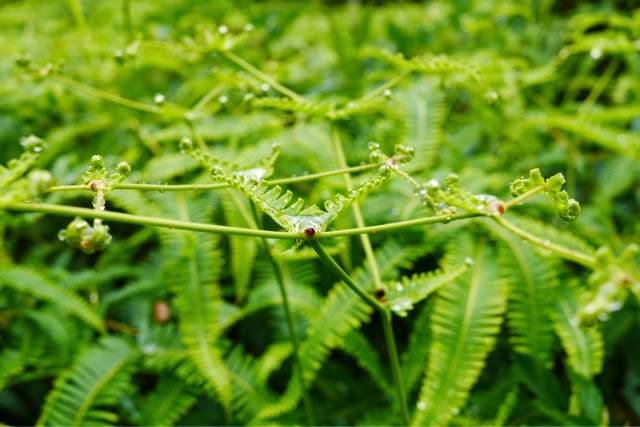 We set off through the forest with the promise of a dramatic view from the cliffs three miles away. As we did the rain came and went, and came again and we all got a bit damp. But we had rain macs and all was fine. 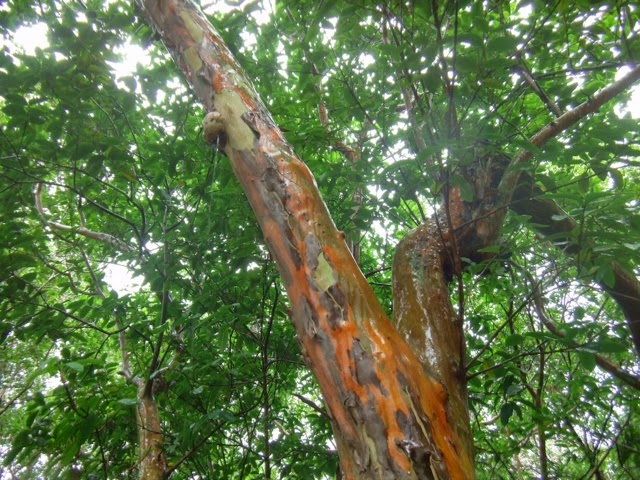 The constant cloud meant the viewpoints tended to have a fine view of about four feet but still we plodded on, gently downhill for about two thousand feet of descent. Then the rain started to fall a bit harder and the cloud got thicker and we were doing the walk for the sake of it, because there seemed very little chance of seeing anything when we got there. 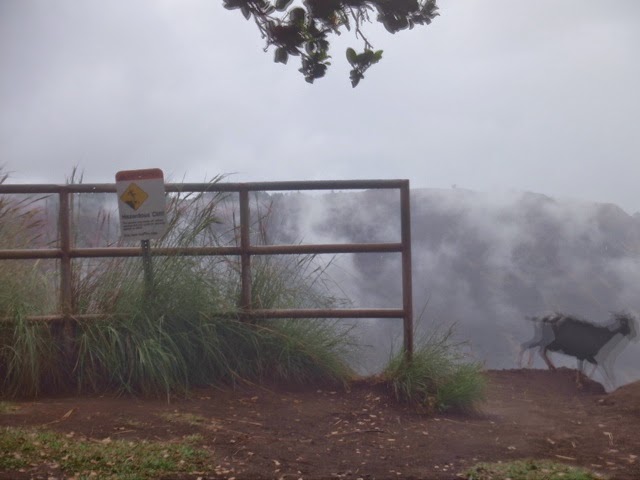 But as we finally reached the cliffs, we ducked just under the cloud and there, with a goat in the foreground, was an astonishing view along a ridge, deeply grooved with sharp green valleys running down to the sea another two and a half thousand feet below us. 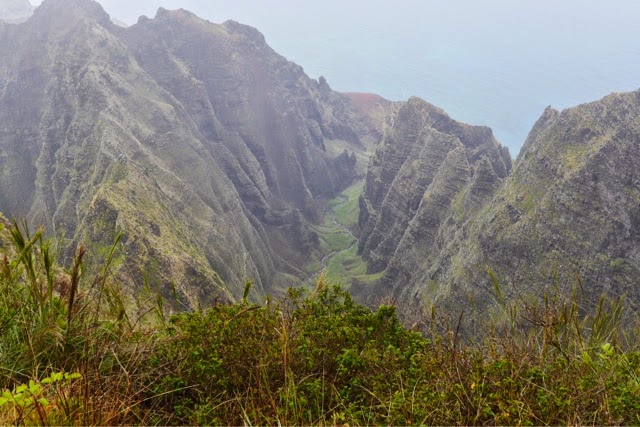 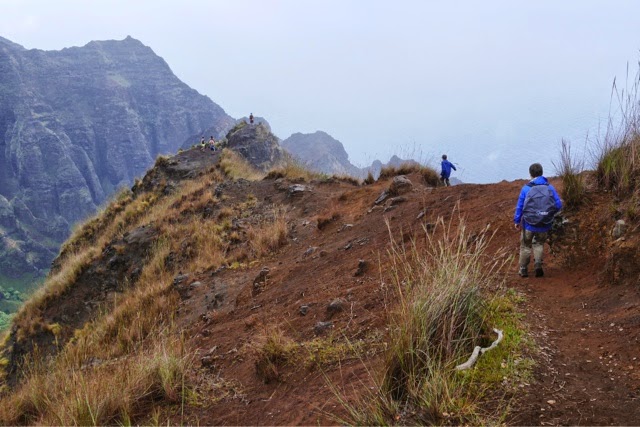 We found a damp patch of earth to sit on and had pita bread with cheese and tomato, watching the cloud roll through the valley beside us, revealing more, then less, then more again of the jagged cliffs covered in what looked like green velvet. 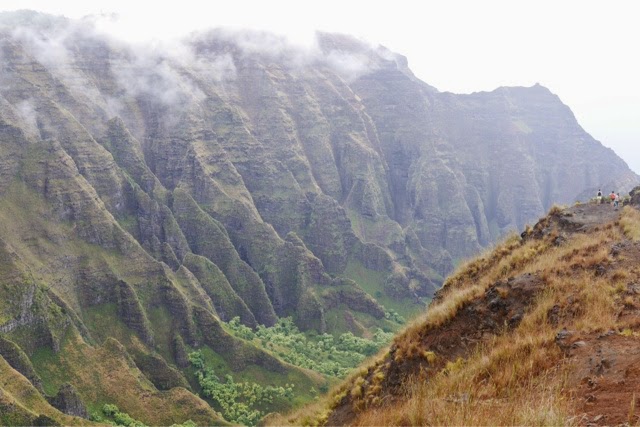 Birds soared and wheeled far below us. Just about as soon as we finished eating, the rain began coming down in rods. A proper tropical downpour that lasted for much of the return journey back up a path that was by now a muddy brown torrent. 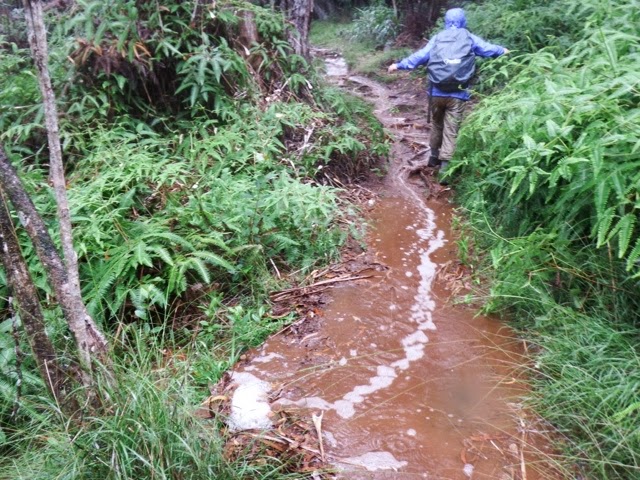 We were utterly and completely drenched. At one point Tom said “I think it is raining inside my head”. Our hiking boots were all full of water to the extent that Tom no longer avoided the deepest puddles, but walked through them. It made no difference. 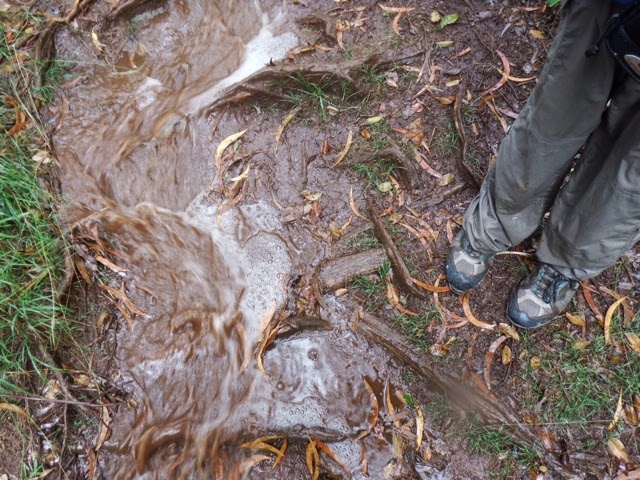 By the time we arrived back at the parking lot it felt like we had all just been swimming in our clothes. I wrung about a gallon of water from my t-shirt and socks and we all tried to find ways to get dry. The rain sort of stopped and the sun came out and soon we were back in the jeep marvelling out our fat pruny hands.

The Waimea gorge is described as “Kauai’s Grand Canyon” and it really is breathtaking – far more colourful than its Arizona namesake with greens and reds and golds splattered across it like oil paints. The cloud made it hard to get a good look at it but we found a couple of overlooks that did it justice and the rain had created a stunning waterfall on the far side of the cliff face. 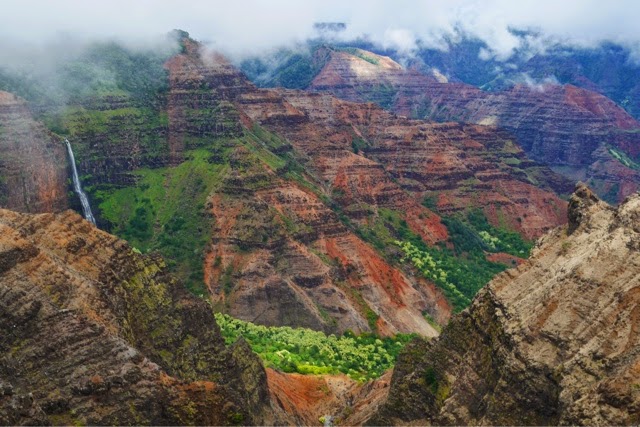 We wove back down to the shore and drove back to the town of Waimea – a place which was once the port hub of this side of the island, before losing its industry and then reviving again with a large influx of Chinese and Japanese settlers who took over abandoned taro fields and got things going again. During the Second World War Japanese settlers made up 40% of the population of Hawaii, a fact which meant they escaped internment because the islands would have ground to a halt without them. Martial law was imposed instead.

There was also a discrete statue of Captain James Cook who made landfall in Hawaii at Kauai in 1779 – the first white explorer to do so. The statue was a copy of one in Whitby. Cook was later killed by natives on the Big Island in an unfortunate dispute over a rowboat.
We made landfall at an ice-cream shop with a cheery owner who joked about the “British weather”. I said Kauai had us licked on that score as even damp old Blighty doesn’t get 37 feet of rain… There was a whiteboard for visitors to say where they were from. Tom wrote “England – ye old country”
Further along the coast are the star shaped remnants of the old Russian fort at Port Elizabeth. It was built for Russian fur traders in 1816 after an agreement with King Kaumuali’i, who evidently fell out with the Russians almost immediately and the fort was used by Hawaiian soldiers until 1865 when it was dismantled. Its sturdy lava-block base remains though and the local authorities have decided that it is actually quite interesting and should be preserved.
Further on, past a local industrial plant and on a rutted red road, we came to Glass Beach. A close look at the sand reveals that it is made of tiny pieces of glass – clear, green, blue and brown. 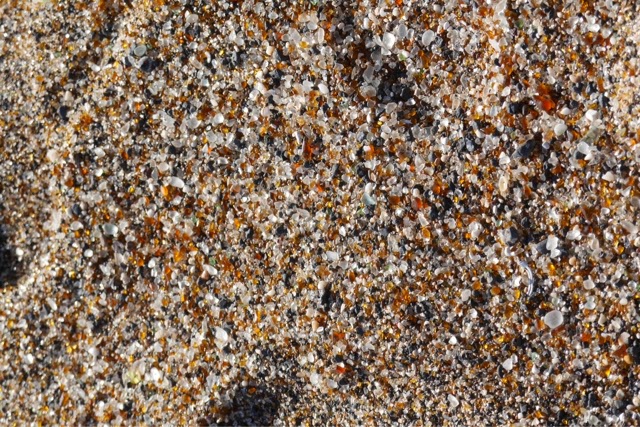 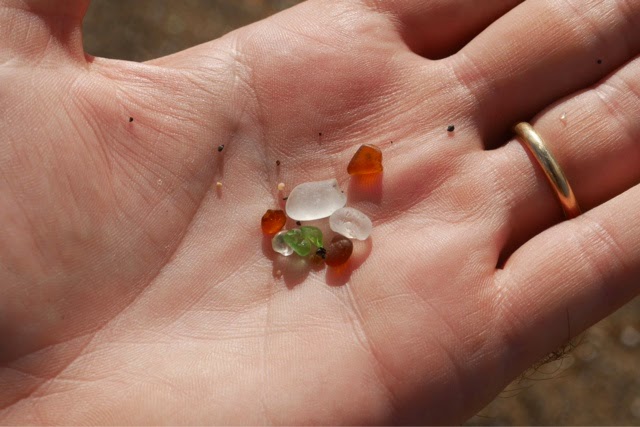 I can’t find any definitive explanation about why so much of it has gathered here apart from the fact that this bit of coast was used as a dumping ground for many years and all that glass has been pounded and rolled by the surf and ended up here. The waves were huge and both P and T found themselves suddenly up to their knees when a big breaker came in. 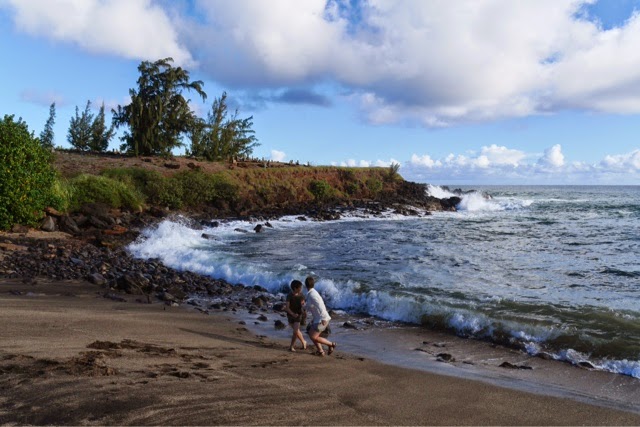 We were by now almost dry – well not quite so wet anyway – and we were huuungry. Most of the way home in Kapa’a Old Town, we found a busy restaurant – the Olympic – which was almost certainly named for the size of its portions. Perfectly cooked fish surrounded by mashed potato and vegetables on each plate that would have fed a family of four. Tom ordered calamari which I can only think came from one of those giant squid which attack sperm whales. We watched the sun vanish behind the omnipresent clouds around the mountains and, serenaded by a solitary Hare Krishna lady at a stop light, we made are way back to the jeep and home. 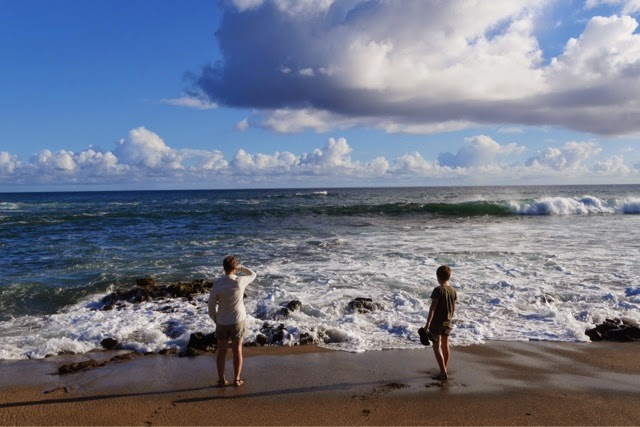