By Richard ListerAugust 26, 2014
Its a forty five minute flight from Maui to Kauai but the two islands are very different. Where parts of Maui are very much the playground of the rich and famous (Oprah has a ranch there) Kauai feels less developed and more overgrown. Its a much smaller island too with only one main road, which skirts about three quarters of the perimeter, before coming to a respectable halt at the foot of the giant jagged peaks which dominate the north west. 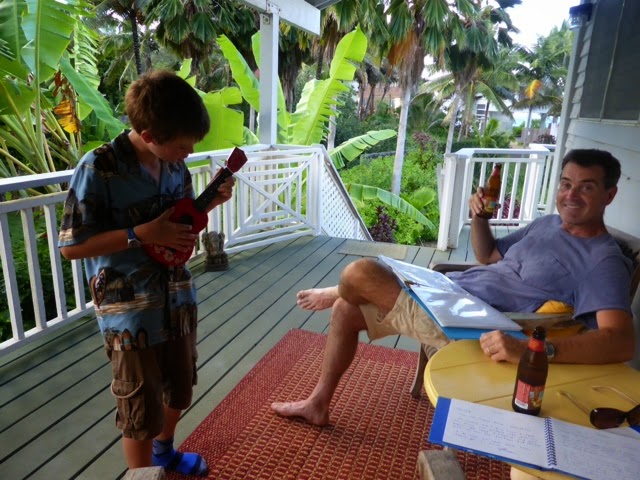 We are staying at a large, airy plantation-style house raised on stilts, surrounded by a lazy river and overlooking Moloa’a Bay. White egrets poke about in the gardens, sharing the lawns with families of chickens which are all over the island. There are several stories about why there are so many. One says they escaped from a chicken farm when Hurricane Iniki blew in, in the early nineties. The other says they are descended from the jungle moa brought by the original Polynesian settlers centuries ago. There’s probably some truth to both stories. The result though is that everyone wakes up when the roosters do… (Except Tom). The fauna and flora are very much in evidence in Kauai. Every room has a nervous little gekko which of course are very welcome. We have learned not to leave a light on in the bedroom in the evening, after doing just that one evening and finding the ceiling covered with slow moving beetles. Arriving back after dark too you have to have a torch handy to avoid walking on the frogs. The bullfrog chorus every night has to be heard to be believed. It sounds like a group of very small roadmenders with pneumatic drills. I promised Philippa I wouldn’t go into the “Spider Incident” in too much detail. Suffice to say kitchen, scuttling and enormous. 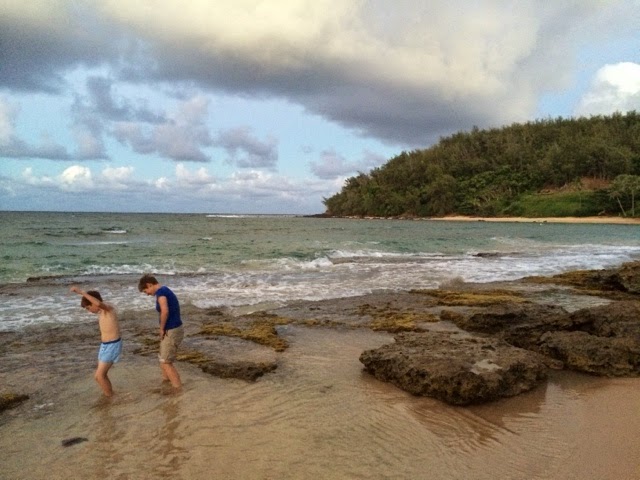 The bay has a reef on one side of it which we have snorkeled around, spotting the sinister head of an eel gawping out from its hole, as well as plenty of fish flickering about in shafts of sunlight. Its very quiet as we are a couple of miles off the main road and there is nowhere for anyone to park who doesn’t live here so we have the bay more or less to ourselves. At the turning from the road there is a juice stand which also sells fish sandwiches and coconut water and various other tropical goodies. Its a handy lunch spot when we can’t really be bothered to find groceries. After all the hurtling around in Maui its nice to have a place to recharge for a bit (oh this holiday has been SO stressful…ahem). Tom has found a miniature Hawaiian guitar and discovered he can pick out tunes on it using violin fingering. Its nice hearing the music float through the house. 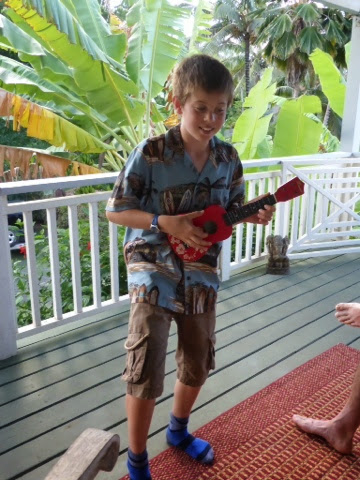