The Road to Hana (from Hana)

By Richard ListerAugust 25, 2014
The day dawned misty and damp, and the beach across the street from us looked grey and forbidding with angry surf smashing a gritty beach. We packed up and set out to find breakfast somewhere, which in a one-horse town such as Hana is not guaranteed to be a succesful quest. The guide book suggested “Uncle Bill’s” with its “is this really a cafe?” sort of vibe, but the road past his house was closed and we diverted down to the seafront where a kitchen with a window hatch was dolling out breakfasts. The concept of Philippa not eating meat was a difficult one to get across and we went around in circles with the young woman behind the counter:
P: “I don’t eat meat – do the home fries have meat in them”?
YWBC : “Yes”
P: “Can I just have the eggs then?”
YWBC: “OK sure. They come with home fries”
P: “As the home fries have meat in them can I have something else?”
YWBC: “Sure. Do you want the noodles?”
P: “Do they have meat in them?”
YWBC: “Yes they do”
And on it went. Eventually she agreed that P could have the home fries without meat in them and when the polystyrene tray arrived, sure enough it had the eggs and the non-meaty home fries. Right next to a portion of the full meat home fries. Tom and I had those.
As it was still looking distinctly blustery we aimed for an inside attraction. Actually, an underground one. Just outside Hana an enterprising individual (from Indiana) sells tickets and distributes torches to view the rather fine lava tunnel beneath his land. It’s a tube formed by molten lava which dried around the outside, while the middle was full of rushing molten lava (about a thousand years ago). The pipe that remains is really rather dramatic. 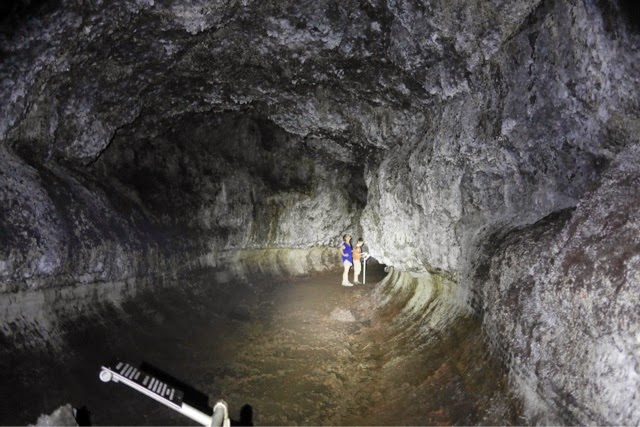 Its probably an average of fifteen feet in diameter and at least twenty miles long, though the bit that’s open for exploration (because its the bit beneath his land) is about a quarter of a mile. 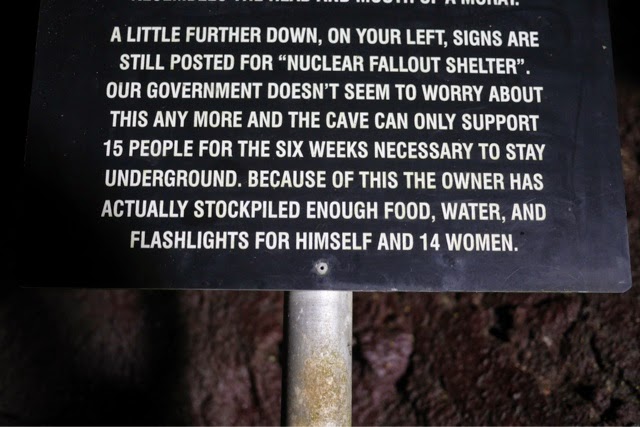 It has wonderful dried gobbits of molten lava like melted chocolate, and stalactites and blind crickets (which looked suspiciously like cockroaches to us). With the torches off it was completely and utterly dark: cue lots of creeping up and poking each other amid shrieks. 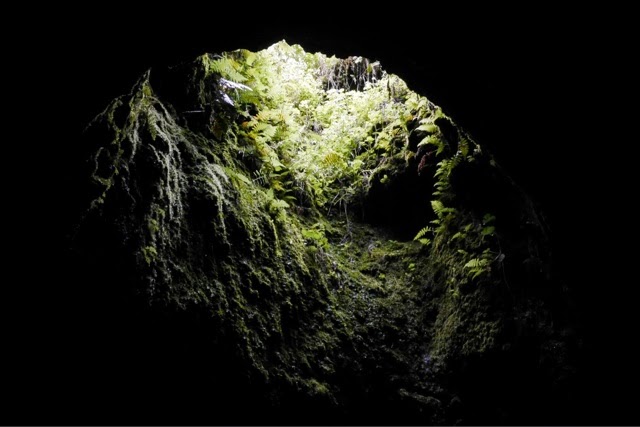 From info boards along the tunnel we discovered that it had been both a nuclear fallout shelter and a dump for bones from the town abbatoir which the new landowner had laboriously cleared out in order to open it to the public. I’m glad he did, it is a great thing to see.
We emerged, blinking, into a wall of heat and humidity. The sun was out and we set off again.
So from here on it was the famous Road to Hana in reverse. There was by mid-morning an almost continuous procession of cars coming down the coast along it and we had the northbound carriageway almost entirely to ourselves. Having learned to drive in Somerset where all the B roads are narrow and many of them not much more than single track, this was not a difficult drive. The road was tarmacked, with yellow lines down the middle, and white lines at the edges, and signs to tell you who had right of way when you came to a narrow bit. Still there were a number of ashen faces coming the other way. Its probably a good job that the rental companies advise against the road we did yesterday… 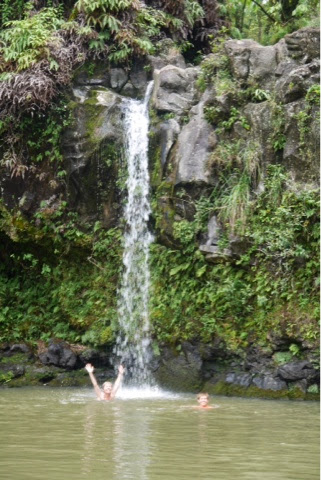 Once again there were waterfalls and pools to swim in along the way and this time we got lucky and P and T were the only people in one of them. I sat at the edge, Englishly, while they swam under the falls, hooting. Then three coachloads of people on a “waterfall tour” arrived, and it seemed like a good point to move on.
For all that it lacks some of the edge-of-the-world wildness of the Pi’ilani Highway, the Road to Hana is still beautiful. Much more lush and verdant, like driving through a rainforest. We stopped for a walk through some old-growth woodland; mango, passion fruit and eucalyptus trees tangled with giant creepers. The guidebook had promised dramatic views from the top, but the foliage was now far too thick and a dense, clacking forest of bamboo had also sprung up. It was though a small taste of what so much of the island must have been like once upon a time. 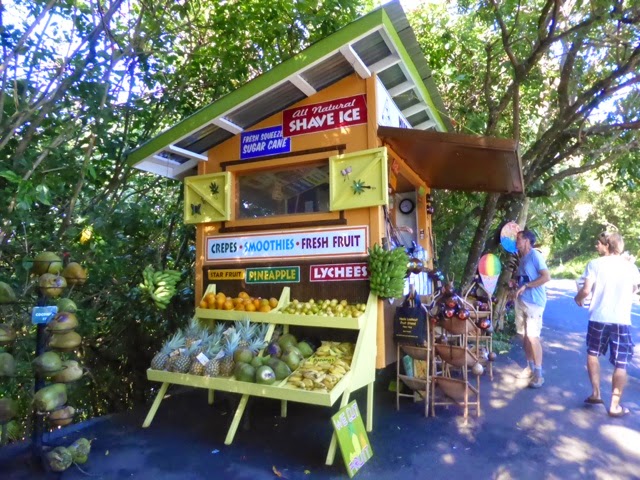 As the sun began to dip, we pulled into “Mama’s Fish House” in Pa’ia. Ours was a splendid little bungalow with all the trimmings and a table for three booked at 7. The restaurant is a bit of an institution and the lobby has photos of past diners such as Frank Sinatra and Clint Eastwood. The food is good, but the backdrop is what makes it. We were seated overlooking a smooth beach with white surf gleaming at its edge. Stars popped in the sky and the sea breeze floated through the open sides of the restaurant. Palm trees leaned and swayed on the beach and gas torches flickered in the darkness.