By Richard ListerAugust 24, 2014
Dominating eastern Maui is a giant volcano called Haleakala. It is the classic volcano shape with steep ridged flanks sloping into a cone which is nearly always partially hidden by cloud. The road to the summit goes from sea level to 10,023 feet over thirty seven miles. It is the highest elevation gain over the shortest distance of any road anywhere in the world, so they say though I imagine the Andes and the Himalayas could offer some significant competition. It is though, one heck of a drive, passing through jungly vegetation then through the cloud layer and up into an arid wilderness of red and grey rock streaked with black lava. P and I were somewhat light headed at the summit. 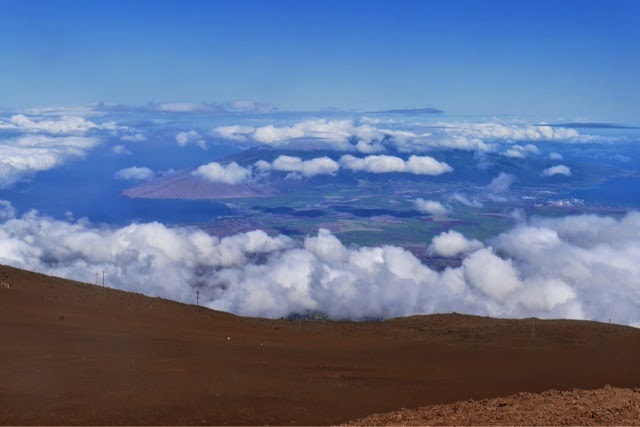 Looking out across the whole island of Maui with the clouds far below us felt like we were coming into land somewhere and looking out of the window of a plane. Looking the other way, the crater appeared as a vast smooth bowl studded with red volcanic cones. It looked a lot like Mars, and in fact it has been used by trainee astronauts. 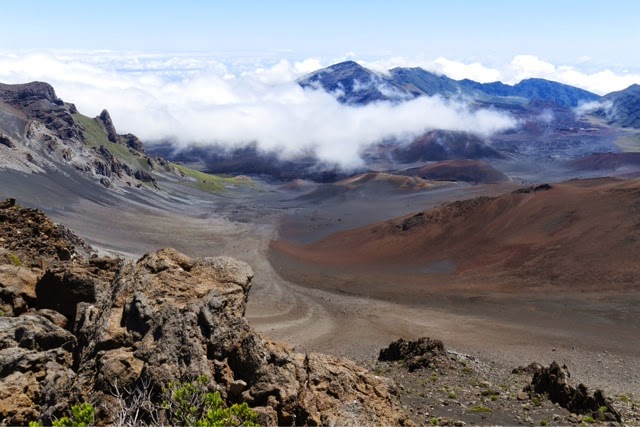 Strictly speaking that bowl is a valley not a crater according to people who know these things, as a volcanic crater can only be caused by a volcano blowing its top, which Haleakala never really did. So the bowl is the result of erosion and is a valley. Oh what the heck, I’m not a volcanologist (though I do know about other characters in  Star Trek). I think I’m going to call it a crater anyway because, well that sounds right. 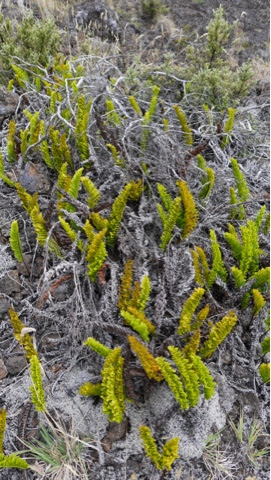 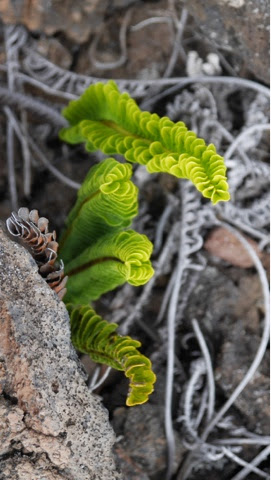 There are several walks down into it; all involve a long steep walk down and another long steep walk to get back up again. The “sliding sands” trail is, true to its word, a path through quite deep gritty sand which would not be a lot of fun on the way back up. So we opted to go down to the crater floor, across the crater and up the other side to a lower point on the access road where we would hitch a lift back to our car. It meant a much longer hike but we would see more and have less of an ascent at the end.

The sun was blazing but the wind at this altitude was cool and strong as we set off down the path; all in hats and long trousers. The view was so immense that to start with we were stopping to take photos every five minutes. 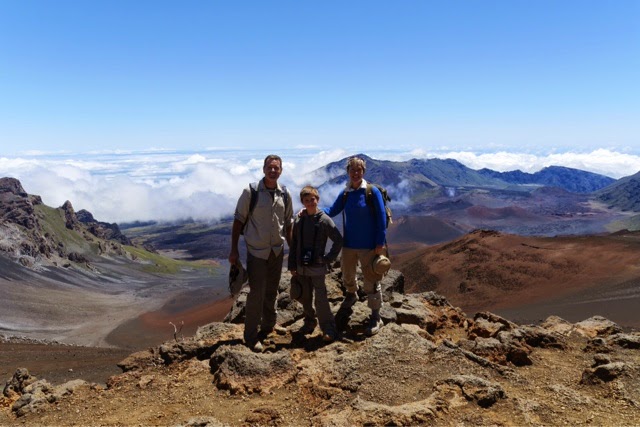 Its the nearest any of us will probably get to being on another planet. Not much lives up there and as we walked there was complete and utter silence around us, apart from the swishing of the wind. Every now and then we passed stands of ethereal and alien-looking silversword which flower just once in their fifty year lifetime. We actually saw a few blooming with dark red flowers. 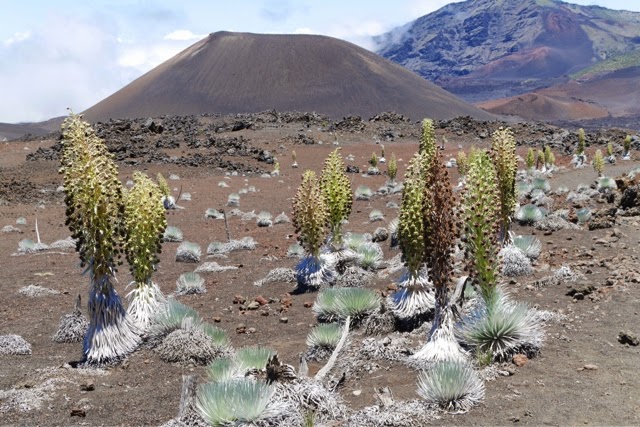 It was hard to gauge the distances ahead of us. When we reached the crater floor we could see the path stretching across is for what could have been thirty miles, but was actually no more than about three. 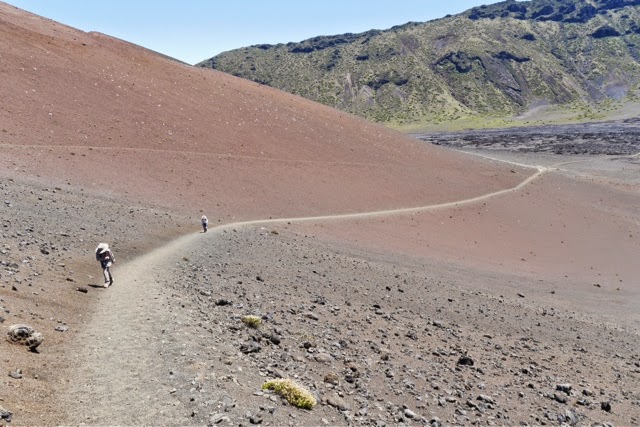 The sharp lava cinders chimed and ground beneath our boots and every now and then a bank of black sand radiated a cloud of  heat as we passed. 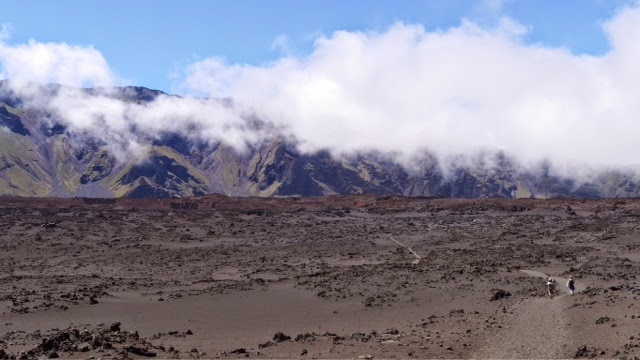 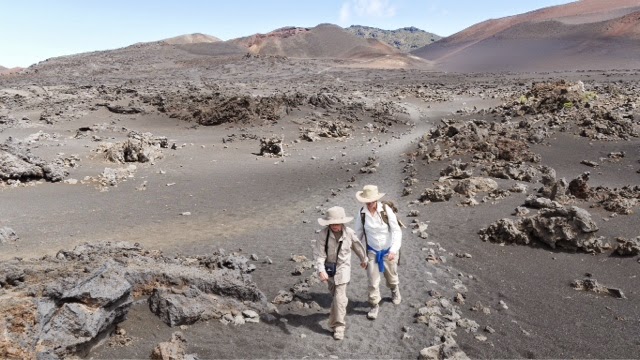 We had our big sandwiches in the lee of a lava pile at the top of a dirt red cinder cone. As we looked out across the hostile, baked landscape we felt like the only people on earth. Indeed we met almost no-one on the whole trek. 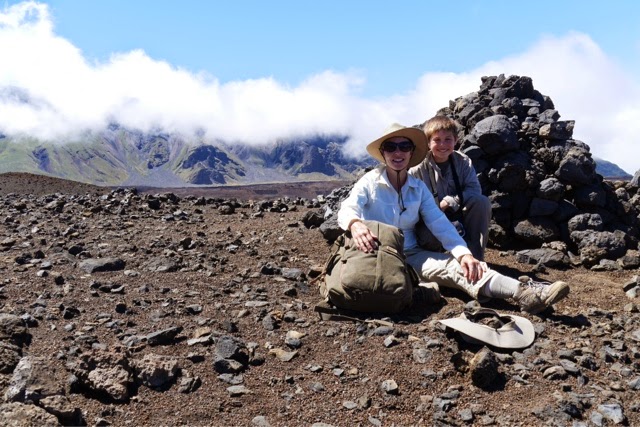 There are three cabins scattered around the park and two thirds along the trail we stopped at one to use the “facilities”. An elderly couple and their friend had just arrived to stay the night. They were from South Carolina and were delightfully gracious in letting us use the basic pit toilet: “If we had known we had company coming we would have tidied up in there…its a little rough”.
For the last part of the walk we had to climb back out of the crater. Three and a half miles and 1600 feet up steep switchbacks to the park road. Tom kept us going; speeding on ahead and asking helpful questions like “which side is your vertigo worse Mum, when the dropoff is on the left or the right?”. 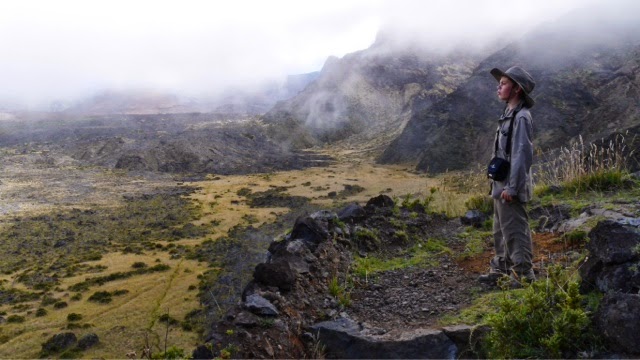 It seemed to be much further than it was and P and T began to realise that I had been lying to them about the distances on my GPS “less than four miles now” (translation: still about four and a half). 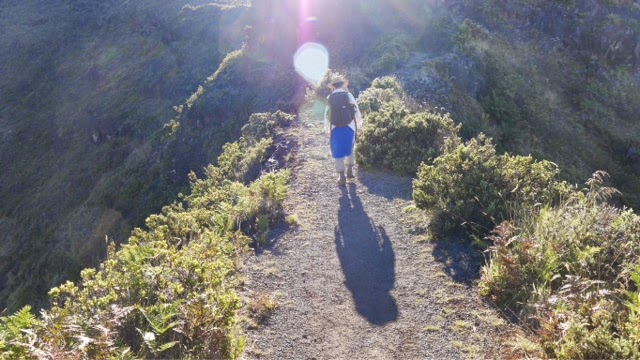 After seven hours, 11.4 miles, 3700 feet of descent and nearly 2000 feet of ascent we arrived at the road. The sun was getting lower in the sky, lighting the piles of clouds below us like glowing clumps of marshmallows. Our legs were humming and our heads were spinning. It was the toughest hike we have ever done but so worth it.
The first eight or nine drivers stared resolutely past us as they made their way up the crater to see the sunset and we changed our strategy, holding a single finger aloft to show we were looking for just one seat (so I could pick up the car and return to P and T). A young couple passed and we could see heads turned in a conversation which resulted in the car pulling over. I ran up and ascertained that they were going all the way up (7 miles) and that they could take me. As they had space in the back I wondered if they could perhaps take all of us…? They could.
Daniel and Esther were originally from Kenya and now living in Kansas City. They had been married for three days and were on their honeymoon. Esther had persuaded her new husband to pull over: “It was my wish” she said. They were a lovely young couple, softly spoken and shy but so friendly, and delighted to hear that we had been to Keya in February and had such a good time. Esther was taken with Tom: “he is so handsome”. Cue lots of blushing 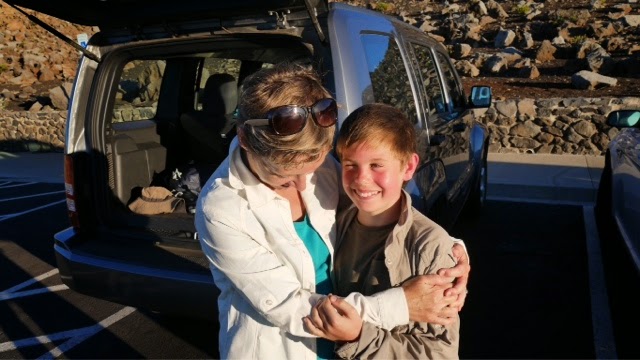 At our car, the tiredness and dehydration took hold of me and I piled on the layers and drank lots of water. Tom seemed physically unaffected by the whole thing. On the way down we stopped briefly to watch the sunset and by the time we got to the bottom of Haleakala it was dark. 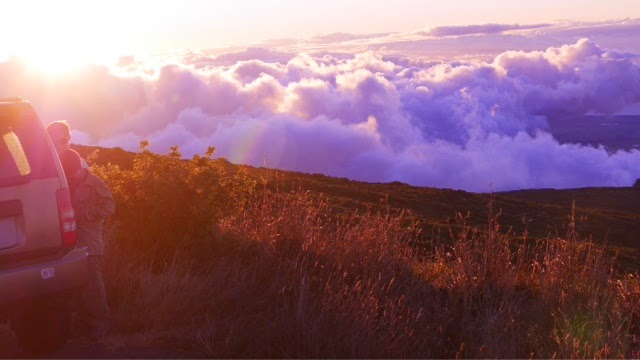 A few miles from Makaweo we saw a young man hitchhiking in the gloom and as we had had good luck being picked up, we stopped for him. He had been on that lonely road for an hour and a half failing to get a lift and was relieved and grateful. His new moped had broken down and he was trying to get back to his house. On the way he told us his recent life story, involving two years looking after his grandmother in Washington state and a chainsaw accident with rather too much detail about how he nearly lost his foot. We dropped him at the crossroads in Makawao and after stopping for a carton of mac ‘n cheese at the Rodeo General Store we returned to the B&B. Sherry was chatting with some Italian guests we’d met at breakfast and none of them could quite believe how far we (and especially Tom) had gone. We were dog tired but it was one of the great days…