By Richard ListerAugust 23, 2014
Yesterday, on the way to the Makena, we stopped at Snorkel Bob’s to pick up snorkels and flippers and masks. The lad who served us was a great advert for Hawaii – he couldn’t have been friendlier or more helpful. Everything was “awesome!”. This morning we tried it all out. There is a reef just a few meters from the beach opposite the hotel and we got up early to make the most of the fact that the sea is much calmer in the morning, We hopped about, waist deep in the water, getting the fins on and then tried out the masks with our faces in the water. At our knees – perhaps two feet away was a large turtle, paddling around and not really caring about our presence. 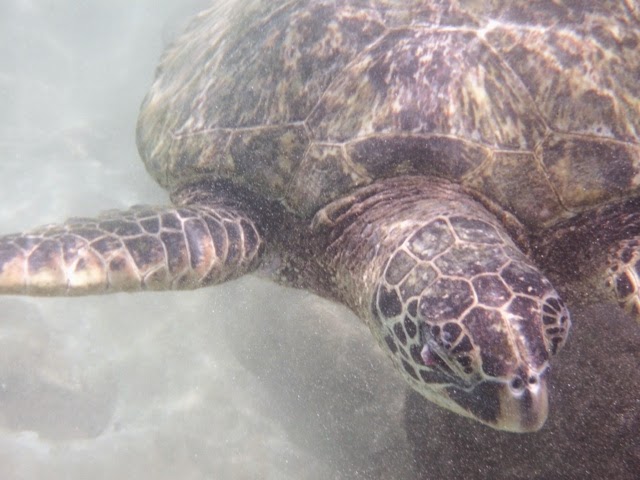 We followed him for a bit – Tom talking excitedly through his snorkel – and then made for the reef. 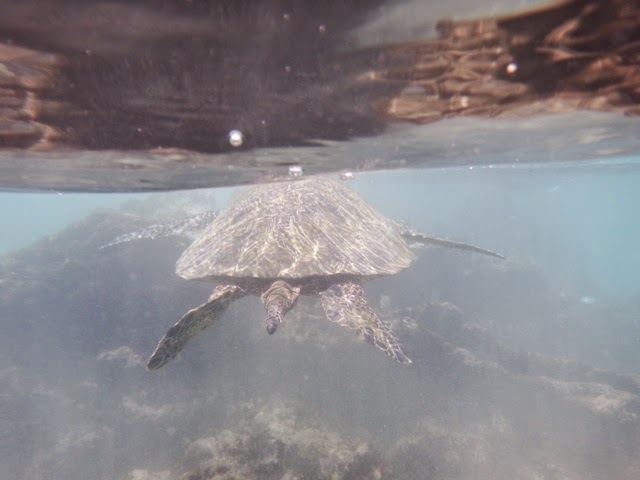 I always find the coral a bit alarming when it suddenly looms up from the ocean floor and the waves threaten to throw you into it. There was plenty to see though; clouds of small black fish, comical parrot fish with their beaky faces and the ones I always think are angel fish with their blue and yellow stripes and trailing fins. My scientific expertise means I can fairly accurately classify them as the kind of fish that Dory was in Finding Nemo. I think. After an hour of bobbing about we returned to the beach and sat under an umbrella watching the sun sparkle on the waves.
T and I decided to go back in again after a bit and then we had a bit of drama. I wanted to use Tom’s camera and took it off its wrist lanyard to put on my flippers (so I didn’t break it like I did the last one). I passed Tom the camera and a moment later he was hit by a huge wave which knocked it out of his hand. “My camera!” He shouted amid the boiling surf. We all put our masks on but the waves were pounding and we couldn’t see a thing. Tom was bereft and I felt like a total idiot for yet again engineering the loss of his special camera. We snorkeled up and down the surfline but it seemed futile. Like looking for a lost camera in the Pacific Ocean. Eventually T and I gave up and walked up to the stall to get a get a drink with me making encouraging noises about how it was only a thing and it shouldn’t spoil the holiday but of course it had all his photos on it and neither of us felt like getting over it in a hurry.
We walked back to the beach and, running from the other end of it, was Philippa – camera held aloft! It was amazing. She had a hunch that it have been caught in one of the long sand channels carved out by the rolling waves and she snorkeled all the way down the shoreline about two hundred and fifty yards from where we lost it. There was the camera a couple of feet down swirling around in the furrow, rocked by the waves. It was in perfect working order. It was almost too good to be true.
We were dazed by our good luck and the rest of the morning had an extra sparkle to it. We boogie boarded and swam and played in the sea as the waves rose; lunch by the pool and as the clouds began rolling in, we rolled out.
Before retracing our steps north we went south, to the very end of the road where four hundred and fifty years ago the volcano spewed lava down to the sea leaving a jagged wasteland of sharp black rock as the lava cooled. Its a striking view up the volcano across the forbidding lava field and at the seashore the beaches are black. 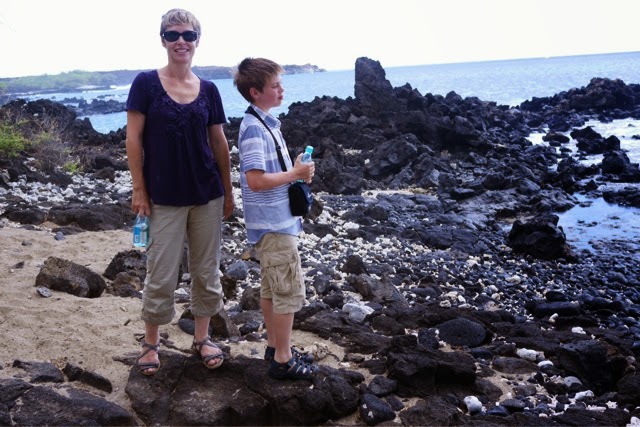 A trail took us past the remains of an old village, the lava-brick platforms on which they built their huts still standing. 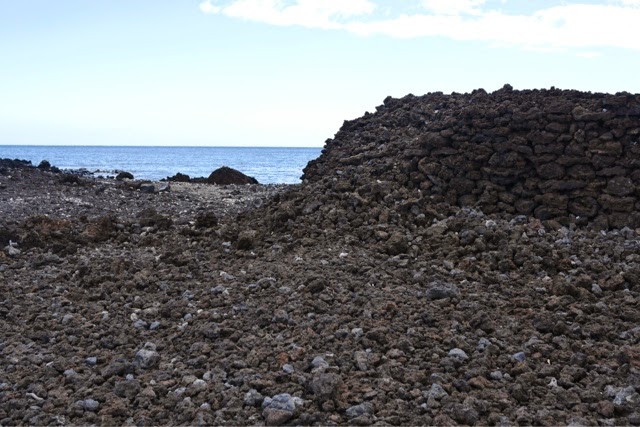 As we walked, the sky darkened and cold drops of rain started spattering our backs. Unlike Southern California, Hawaii does have proper Weather which changes almost hourly. It can be cool and still in the morning then the sun comes out – then clouds and wind come up and it might rain in the afternoon briefly. Its like getting all the seasons in one day, 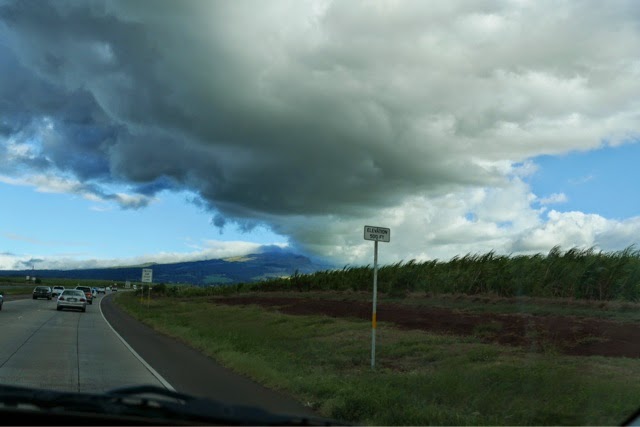 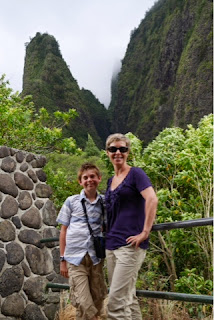 After driving north again we turned west at Wailuku to see the Iao Valley with its large rock monolith (the Iao Needle) that was reckoned to be so beautiful that only the highest nobility in Hawaii were permitted to view it. These days, anyone with the price of an entry ticket to the state park can do so, and so we joined the masses to gaze at the big Kahuna to the sound of the Hawaiian Aristocracy turning in their graves.


Our final destination was a B&B in the cowboy town of Makawao (Maka-wow). The Hale Hookipa Inn is an old plantation house filled with antiques and knick knacks. The floors and doors are all appropriately creaky and the beds had Bedknobs and Broomsticks iron frames, but without the teleportation facility. The owner, Sherry directed us to Casanova’s restaurant in the middle of Makawao; a classic western frontier town of single story, flat-fronted wooden buildings from about a century ago.

The town centre is really just the crossroads. We stocked up on huge sandwiches and lots of water at the Rodeo General Store for a walk tomorrow and then ate big Italian at Casanova’s, served by a friendly waitress who had just moved to Maui from LA though her accent suggested she had probably come originally from Mexico. She was quietly disapproving about the oversized portions in the restaurant but she liked Maui where she said she could be herself, unlike LA where the pace of life was not really her… It hadn’t really struck me that people from the continental US could move to Hawaii – you so easily forget that it is a state rather than a country, though I suppose it is a country really, which was just handed over to the US by its Queen. That’s a fact that still appears to stir some resentment according to the few places we have seen where banners proclaim “This is Hawaiian sovereign territory”.