By Richard ListerAugust 22, 2014
We’re at thirty thousand feet somewhere over the Pacific heading for Maui. It was a genuine wrench to leave the house and drive that splendid road that winds around the hill for the last time. I don’t think we had expected to have quite such a varied and spectacular time in LA, but it was a treat. The LA freeway treated us kindly today: Sunday morning is clearly the time to travel and the drive was smooth and easy right up until we had to find the car rental return. Although the rental receipt said “S. Airport Blvd” we actually needed “Airport Blvd”. When we’d worked that out we were tricked into going to the wrong place (again) by the crafty placement of a whole string of comprehensive “Dollar rental return” signs which led to a vacant lot with a sign saying “No longer at this location” and giving an address that required you to either have a map or to actually live in the neighbourhood. Thanks satnav. Goodbye Mustang, you were a lot of fun and we had the top down every day. Now comes Hawaii…
(Later…)
At the Makena Beach and Golf resort we’re pretending that it really is about 4.00 in the afternoon and not the 7pm our brains are asking about. The hotel is down a long road south from the airport along the coast, which eventually dead-ends at a lava field.  Big comfy beds, lots of towels and through our window at the end of the manicured lawns, a wind-whipped Pacific framed by the flapping fronds of a row of palm trees. This is a little bit of pure tourism and it feels great. Tom has got a pack of kid’s Keiki dollars which he can spend on drinks and boogie boards and snacks, about which he is unfeasibly excited; “I can treat you!”.
The surging Pacific feels very much like a big ocean pounding on a small Island. We do have a sense of being an extremely long way from anywhere else – perched on these volcano tops poking through the sea. Its a little bit unnerving to think of this vast area of empty Pacific all around us.
Despite the fierce wind we all run into the warm water under an increasingly rugged looking sky. The waves throw us about and fill our hair with sand and eventually we retreat to the pool where Tom spends the first of his Keiki dollars on a smoothie. Life is really very fine. 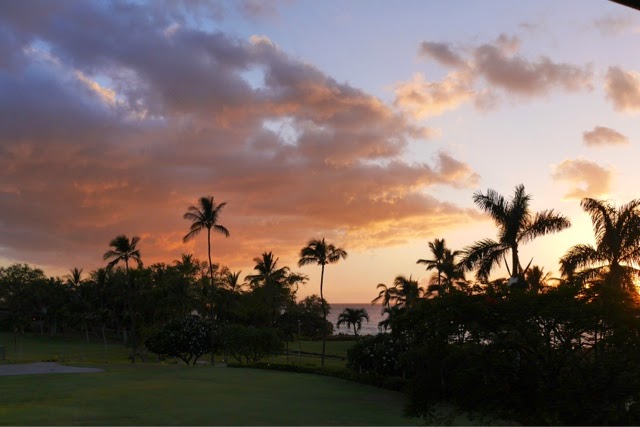