Well that was a big day. After dropping T at Film School, P and I crawled on the highway down to Malibu Creek State Park. It would probably have been easier to take the car but we needed the exercise.

With its walks through sage lined canyons and along dusty ridges with views the park was nice enough, but the reason I wanted to go was because it is also where they used to shoot MASH. It takes a good couple of hours to get to the spot but when we did I felt the hairs creep up at the back of my neck. We rounded a corner and there was the shell of one of those familiar 4077 ambulances. 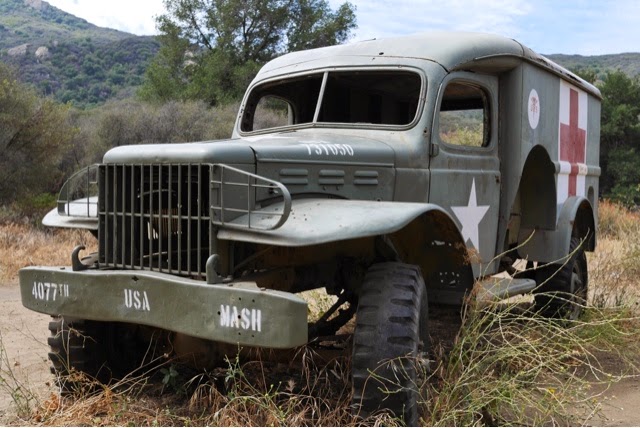 They’ve left a couple more vehicles too, now collapsed and rusted in place, slowly being consumed by nature. The park authorities have put up a few info boards with photos of the filming in the positions where the shots were taken. 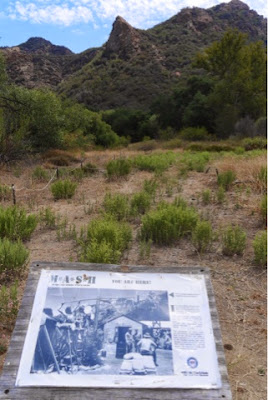 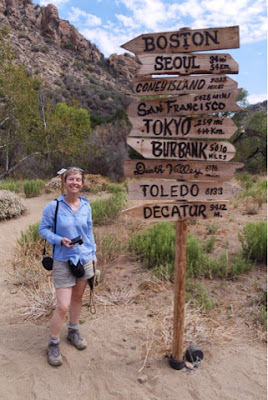 It all felt completely familiar, though actually the set was a lot smaller than it seemed on the TV. All the locations were bunched fairly tightly together and some they had staked out so you could see where the operating theatre was and the “Swamp”. 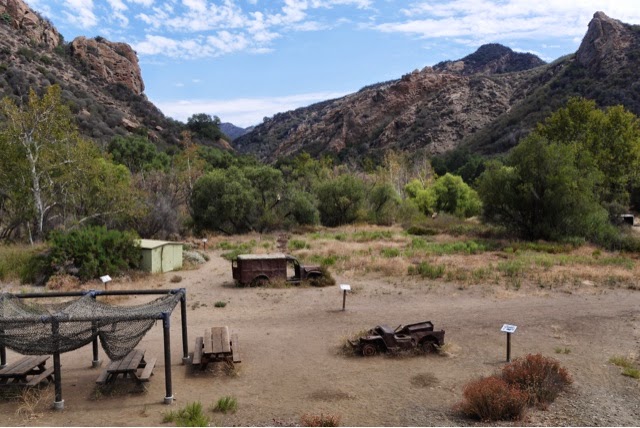 The helicopter pad is still there and I really felt the ghosts of that series there too. We hummed the theme tune as we left. 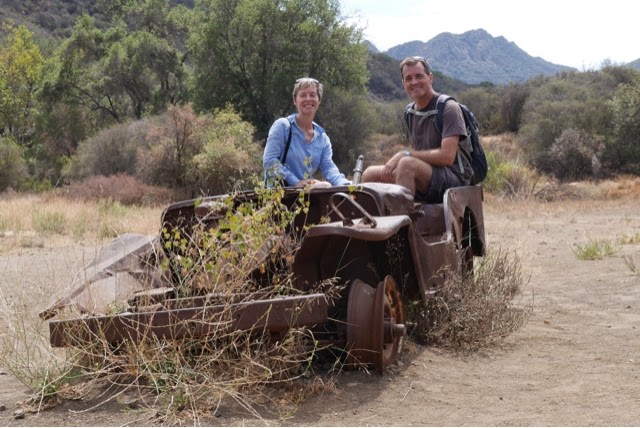 Having read that Paramount still has a Wild West set in those hills we struck out for it, hoping we could get there without having to double back on ourselves. We walked along the road that the MASH producers had built to get the filming location, but the main road it used to link to is now blocked off by an officious landowner who had fenced his property off and posted warnings that tresspassers would be hung drawn and quartered etc. We took a fork in the trail to the next bit of residential road and began the much longer walk to get to the Paramount set along hot roads which had some shade and a bit of a breeze but not quite enough of either. I could sense that P, walking behind me was Not Impressed with my gung-ho attitude to striking out for Paramount in the blazing heat but when we got there, rather red faced and dessicated, we found that there was an actual movie under way (“Boonville Redemption 1906” starring Pat Boone and Ed Asner). The first indication was the extras in full-on western gear riding horses out of the little town they’ve built there. 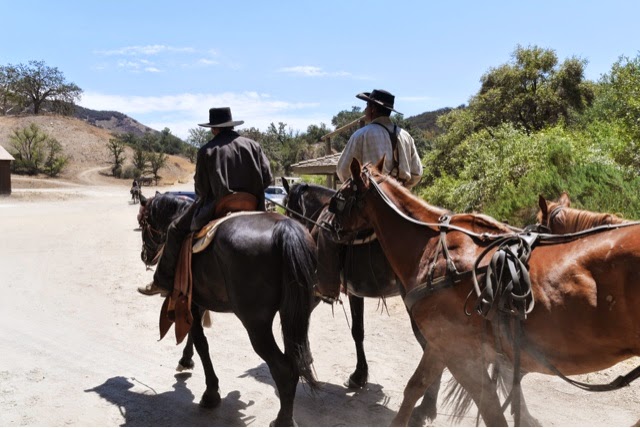 Then we saw the lights and screens and more extras in big hats and waistcoats clustered outside the saloon. 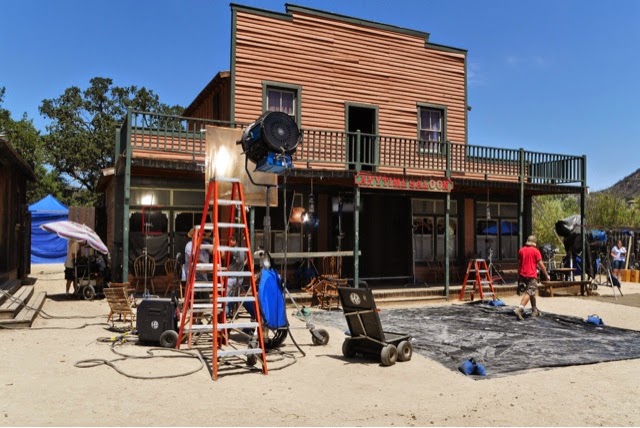 A producer type told us we were welcome to wander around but if they yelled “action” we should get out of the way. We sat on a stoop and watched the action going on in front of us, incuding a short tempered director yelling at a couple of extras that he wanted to be closer to the building where they were filming. “We’re here to work! If I can’t see you, I can’t use you.” That’s an aspect of the job that Tom possibly hasn’t been focusing on in film school. 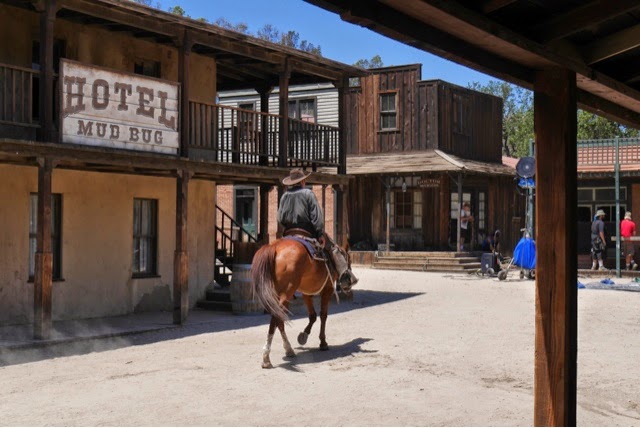 The park ranger came over for a chat and was amazed how far we were walking; “In this heat?” A few minutes later a big guy with a cream cowboy hat and a toothy smile brought us over a couple of ice-cold orange sodas which were exactly what we needed. I drained mine in practically a single gulp, When they finished at that location and called for a lunch break we wandered over to the mess hall and I was amazed by how many people were in there, All the crew and a large number of actors dressed in 19th century western gear. Probably around a hundred people.
The walk back was quicker, but hotter – in the mid nineties, We discovered that we had walked almost ten miles when we got back to the car. There was a refrigerated soda machine in the car park and we put a dollar in and found three cans deposited in the tray. P left one of them for someone else as “good karma” I wanted to drink it and actually I still feel constantly thirsty.

After a quick pit stop for showers we went to collect Tom and headed back tto the Griffith Observatory where we failed to find a parking place amid the frenzy of visitors last Friday. It was still busy but we got there in time to see a presentation in the vast planetarium. It was a new show about the history of the universe which combined the usual projected star maps with fantastic – and vast – animations of Ptolemy at work and Galileo’s study and various other illuminating scenes. It was really effective, I can still hardly believe that it takes billions of years for the light from the furthest stars to reach us, We are very very tiny but as Carl Sagan said, “we are all starstuff”, which is comforting. 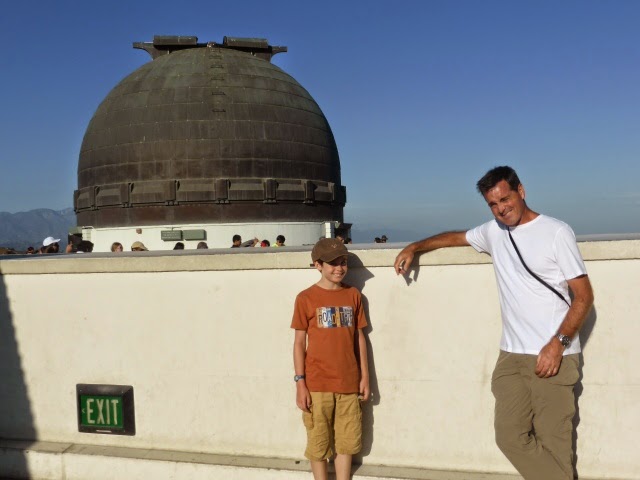 After more poking about in the Griffith and learning that the outer surface of the sun is composed of glowing granules, each about six hundred miles wide (!) we walked the mile back to our car and off to an Italian place recommended by the owner of the house. What a lovely evening. We sat outside between tall trees in a busy, buzzy courtyard. The food was terrific and Tom was full of, er, beans, talking intensely about some of the things he’s been learning: using different lenses to get across a feeling of intimacy when you film people, and how dialogue can only ever be a small part of what the scene you are shooting is trying to convey. He’s taking it very seriously. He has had to come up with a new film as the wonderful idea he wanted to shoot which had a series of scenes linked by a flying football wouldn’t work because balls are banned on the Universal backlot! His new idea is a good one though and we are looking forward to seeing its premier on Saturday. Right now though I am looking forward to bed…