Roll on the weekend

Saturday morning began with a Premier! At 9am sharpish we, the proud parents, assembled in the screening room at the NYFA, having first walked the red carpet assailed by paparazzi. Or taken the lift to the fifth floor anyway. 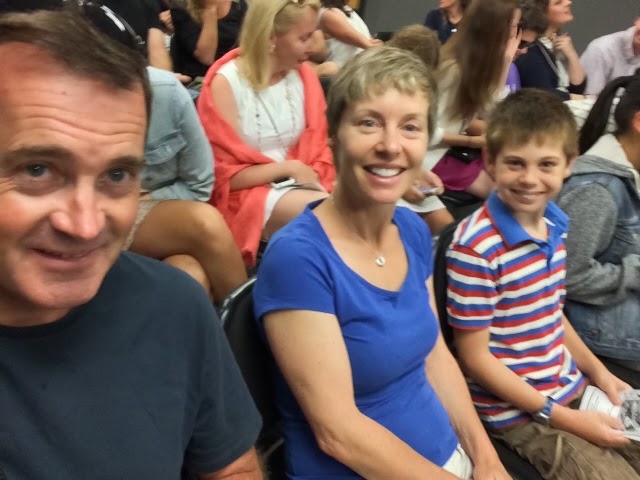 Tom’s was the first movie; “Trap” and drew the biggest laugh for an inspired bit of editing when the bad guy gets knocked-out. He did a great job and we are proud of him. The others were also surprisingly high quality and imaginative (though a couple were beyond us).

As it was his weekend off, and as his parents have had every day off so far, he chose what we did next and what we did next was the La Brea Tar Pits and LA Museum of Contemporary Art! At the museum we had a specific piece in mind: “Metropolis 2” by Chris Burdin. 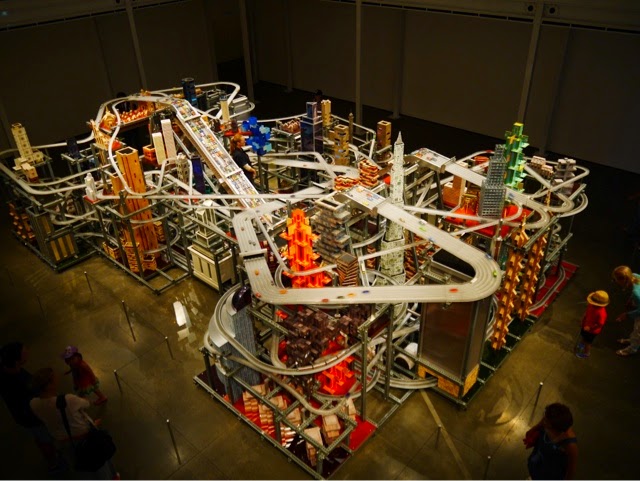 Its a giant track set full of toy cars that are raised to the top on a converyor belt. It only runs a few times a day and we were there for the big moment when a lady wearing earplugs flicked the switch to bring the whole thing to life. Terrific!! 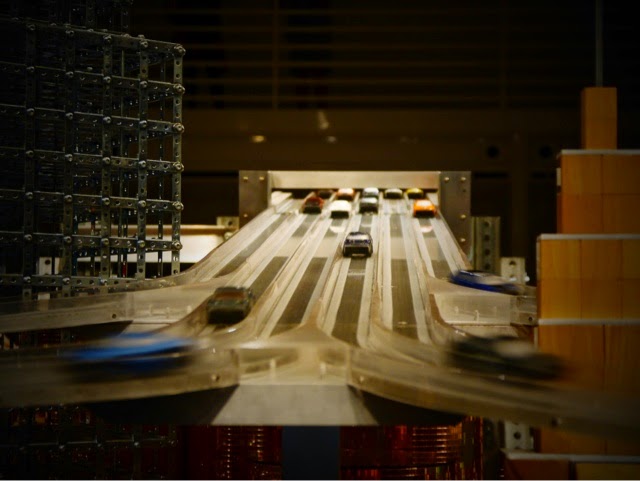 The cars whizzed through miniature modern buildings and the whole thing looked just like LA feels. Quite a racket but mesmerising too.

I could say lots more about the many and varied things we saw but what really sticks in my mind were the wonderful Netsuke displays – tiny Japanese carvings used to cinch up a kimono (that may not be quite right but its close enough). Here are a few.

There were lots of modern pieces too of course… 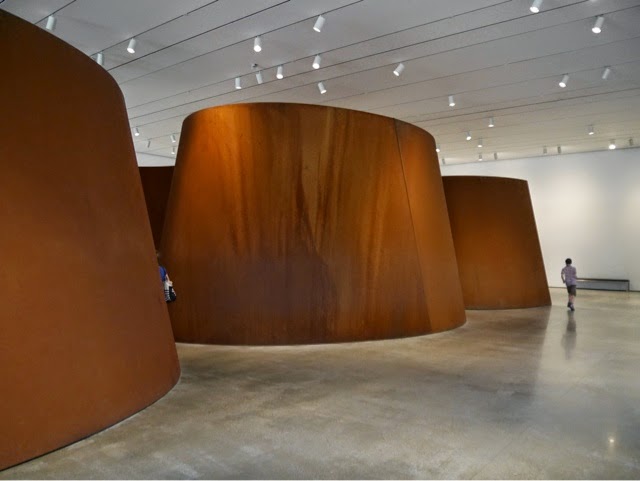 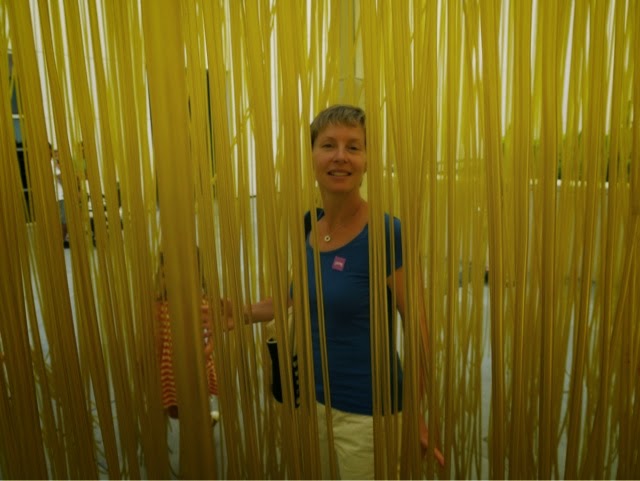 And then on to the La Brea Tar Pits which were the one thing I Really Wanted To Do while were were in LA. Somewhat disappointingly there is no deep lake of tar with mammoth bones sticking out (well there is but it’s underground) but there are lots of asphalt seeps where black goo bubbles to the surface. The whole place smells like a new road.

Pleasingly it has not respected the ornamental lawns around the visitor centre and black railings have been hastily erected around various bits of lawn now covered with sticky black asphalt blurted up from the depths.

There is a large pond too – the remains of an old gravel pit – which bubbles with methane and has large puddles of asphalt floating about in it. It also has an arresting diorama of a mummy mammoth stuck in the tar while a baby mammoth trumpets pitifully (one assumes) from the bank. The daddy mammoth looks on stoically. Actually he looks far too stoic to my mind, bordering on the quietly pleased in fact. There’s a bigger story there… 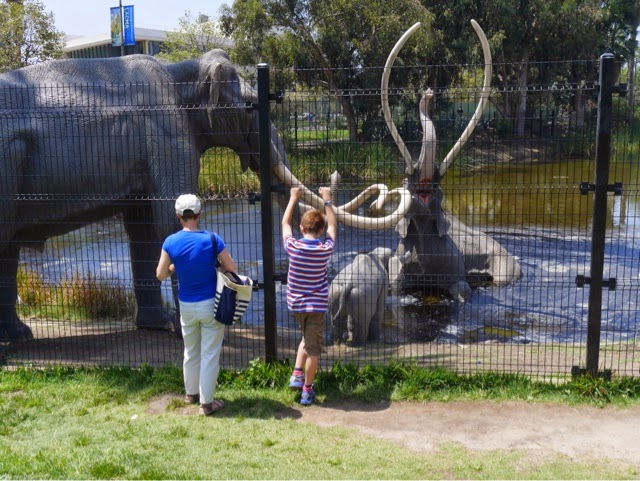 It is apparently the most prolific source of fossils of any tar pit anywhere. Five million and counting. We checked out one of the pits they are excavating and it looked like fairly grim work; stuck in a hole in the baking heat trying to dig out bones while glue-like tar constantly seeps up to the surface. 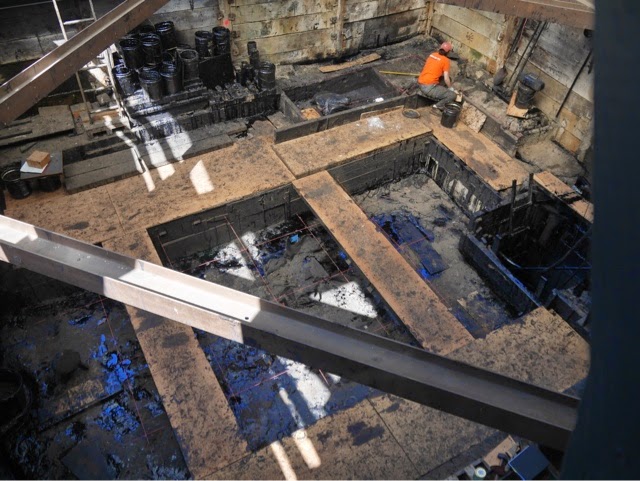 You could see large bones in the ground partially exposed and in the museum itself we watched other paleontologists sift through the muck for the tiniest bones – mouse toes the size of a flea. The bones of carnivores and prey were all jumbled together. An animal would get stuck in the tar and attacked by predators which would also get stuck and attacked. But the fact that struck me the most was that the massive density of animal remains would have been created by just one of those mass strandings every decade, beginning about 40,000 years ago. 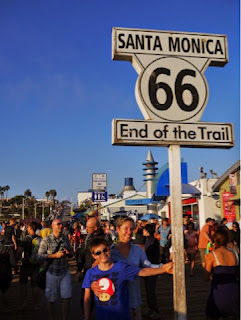 True to form if Saturday was culture, Sunday was sweat. We drove to Santa Monica and rented bikes from a cheery Dutchman who lent so many bikes to hiis neighbours that he decided to make it a full time business. There is a cycle path that goes 22 miles along the coast and we did, ooh several; from Santa Monica down almost as far as Manhattan Beach and back along a curving beach path full of cyclists, rollerbladers, skateborders, reclining bikers and dim pedestrians unable to read the “bikes only” signs all over the tarmac.

It was a bit of a slalom at times but great fun and Tom was in his element. On the way back we stopped at the skate park and watched some cool boarders performing for the crowd while pretending we weren’t there, A couple were seriously good… 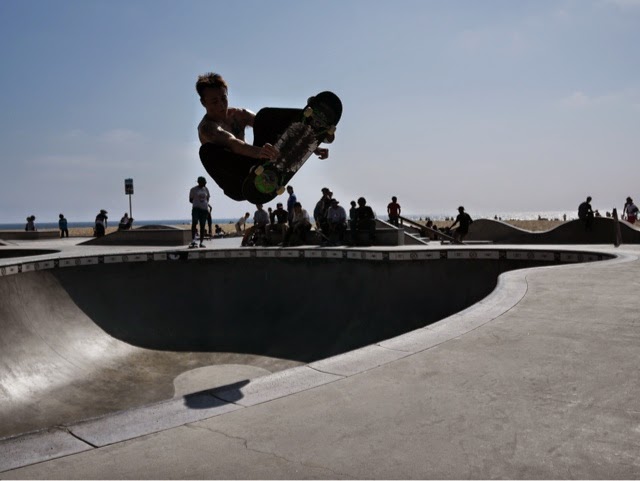 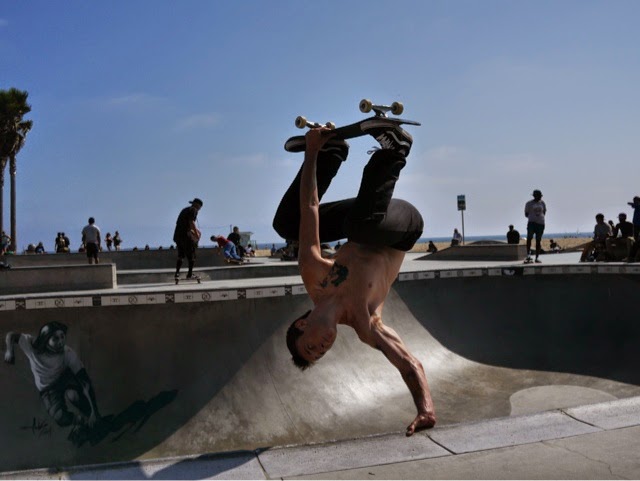 Tom eventually scampered off down the beach and plunged into the sea; going further out than seemed wise and getting hurled around by the waves in the late afternoon sunshine. He came back saying he had been thrown upside down THREE TIMES and was cross when I laughed at his indignant outrage. We ended up at Santa Monica pier of course on the Pacific Rollercoaster that Tom had been coveting a ride on since we set off. 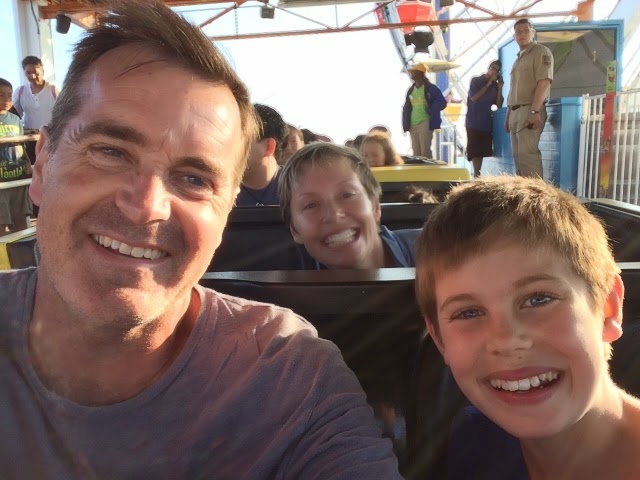 We rose and dipped and clanked around the track with our arms in the air and the lowering sun in our eyes. We had supper on the pier too at a busy seafood place that churned out excellent fried fish and lobster sandwiches. 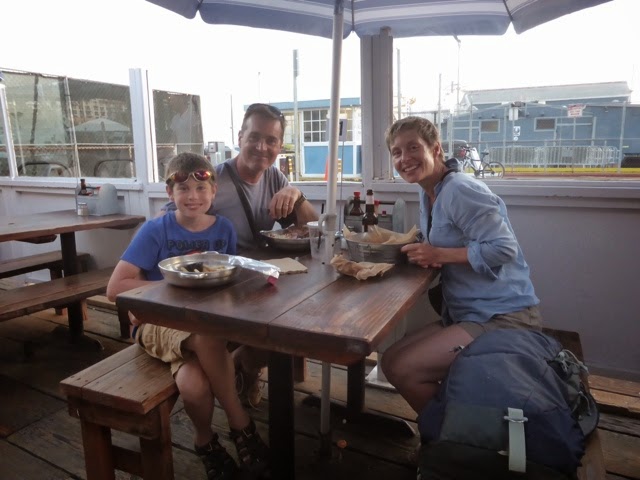 There was a “supermoon” rising and we watched it glowing over us as we cycled back to the rental place, baked and glowing from the days heat 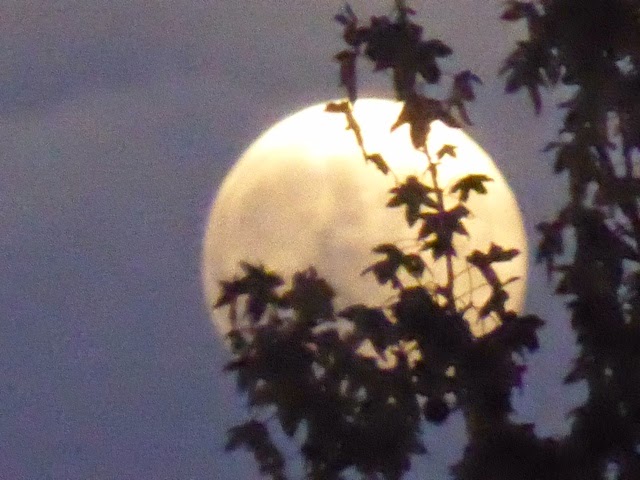