So on the days when we are not covered in dust and sweat and wondering if we brought enough water, we have been quaite refained and taking in LA’s cultural cornucopia. First to the Getty Museum which is a lovely airy complex of pale limestone high on a hillside looking out to sea. It somehow feels like the headquarters of a very well resourced cult with an air of serenity and smiling docents moving people about and of course the Art absolutely everywhere. There is an astonishing variety of exhibits, from entire French Rennaisance rooms to medieval altar pieces, paintings by Canalletto, Turner, Manet, Van Gogh (Irises) well you name it really… My eye was caught by a fantastic writing bureau which opened at the turn of a key, powered by clockwork. I wanted one. 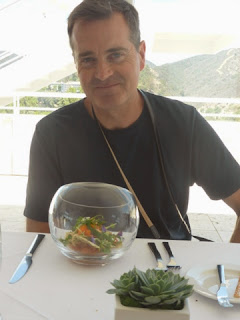 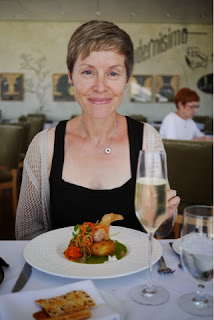 We had a splendid lunch in the posh restaurant to make up for the one we missed on our wedding anniversary.

The gardens were perfectly laid out of course and the sunlight through the blooms made the whole thing bright and beautiful. 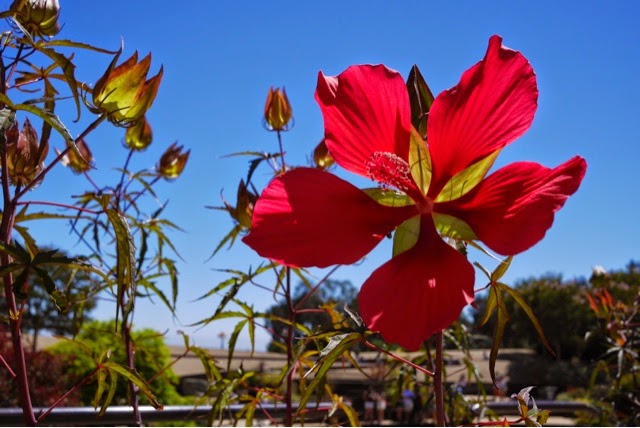 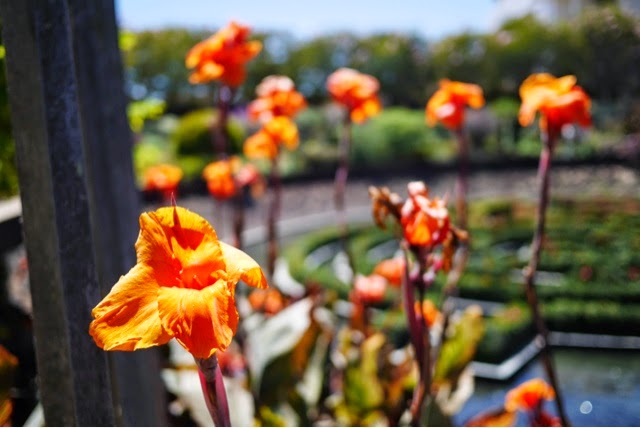 Another cultural highlight (actually they have all been great) was the Japanese American Narional Museum in LA’s Little Toyko. As you might imagine from the name, it tells the story of the experience of Japanese people in the US. What is frankly remarkable is that any of them stayed at all. They first started arriving in large numbers in the 1880s when Congress banned Chinese immigration and major corporations needed another form of cheap labour, so they turned to Japan. So many labourers were brought in that they were banned from buying land. Then immigration from Japan was banned altogether. The only recourse for Japanese families who had kids born in the USA was to put property in their kids names until that was banned too. After the attack on Pearl Harbor the government commissioned a secret report on the loyalty of Japanese Americans which found that there were few people more devoted to the USA – despite the fact that they weren’t allowed to be citizens, own land or look after their kid’s finances. But the report was suppressed and in 1942 more than a hundred thousand Japanese-Americans on the west coast were uprooted from their homes and put in internment camps for the duration of the war. 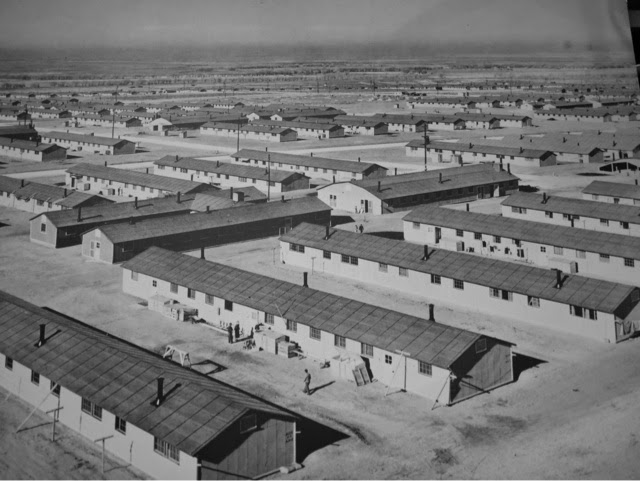 The camps were in remote parts of the country where they faced huge extremes of temperature and miserable conditions. This whole situation was supported by an utterly spineless Supreme Court. Later on in the war it was decided that these Japanese-Americans should in fact be subject to the draft and fight to support the country they had been denied any part of. Those that did fight became some of the most highly decorated soldiers of the war. When internment finally ended, many Japanese-Americans found their homes had been taken over, their businesses destroyed and their former neighbours didn’t want them back. 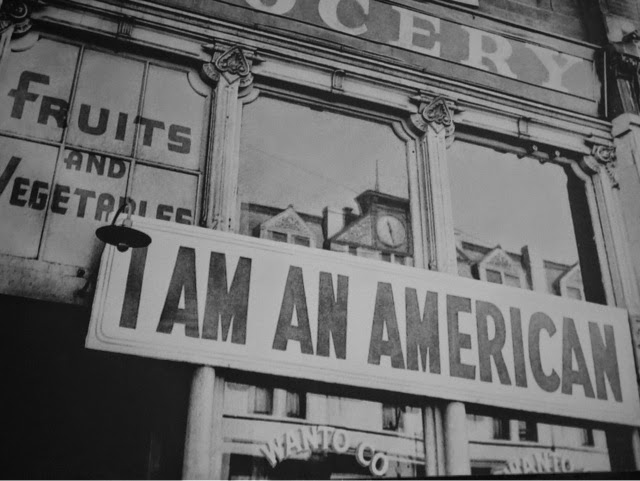 There were some uplifting stories of course but on the whole it was a pretty shameful chapter told very sensitively in a museum which had a superb range of exhibits to illustrate it.

This was a day when we took the metro and went via LA’s terrific rail station which was built for an age when trains were the only way to travel and the stations were cathedrals. I remember this station from trips gone by and it’s still lovely. Imagine a time though when all of these ticket booths would have been full… 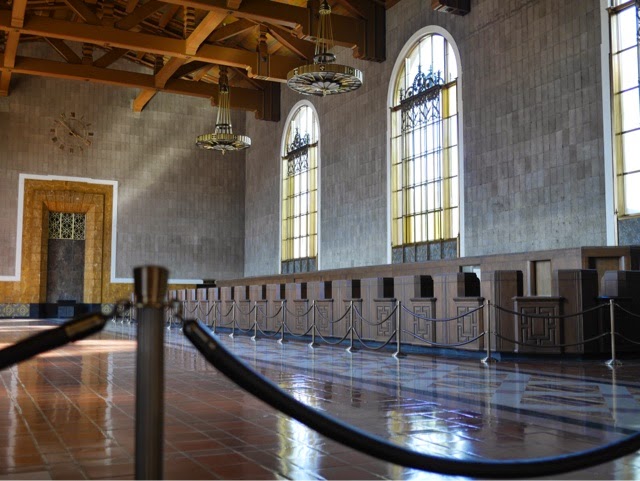 Also on the kulcha itinerary was the Huntington Library.

It was founded by Henry E Huntingdon who made his fortune building railroads and married his uncle’s widow. From their portraits he looked like a restless individual with a ready smile, and she (Arabella) looked distinctly eccentric and vaguely terrifying. In her portrait she was dressed all in black with black-rimmed specs, a veil piled on her head and a dark glare. She also became one of the leading art collectors in America. They spent their money on a palatial estate; Art and plants and books and well, anything they wanted really.

The result is open to all and despite the beating heat we toured the Chinese Gardens with their clacking bamboo forests and pools then the Japanese Garden with its bonsai and bridges and carp and the Australian garden which had the biggest eucalyptus trees I’ve ever seen. 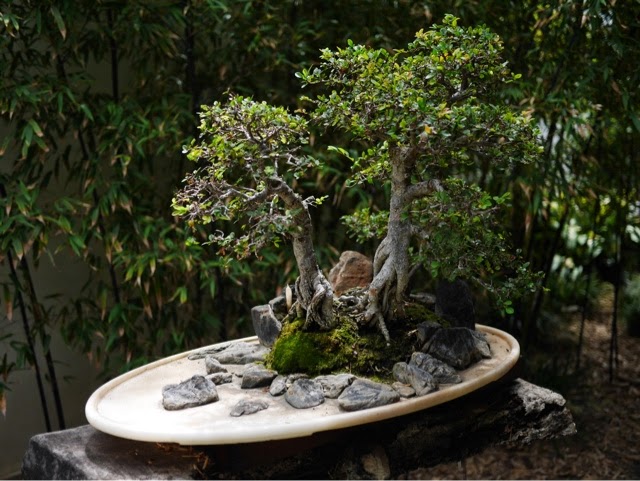 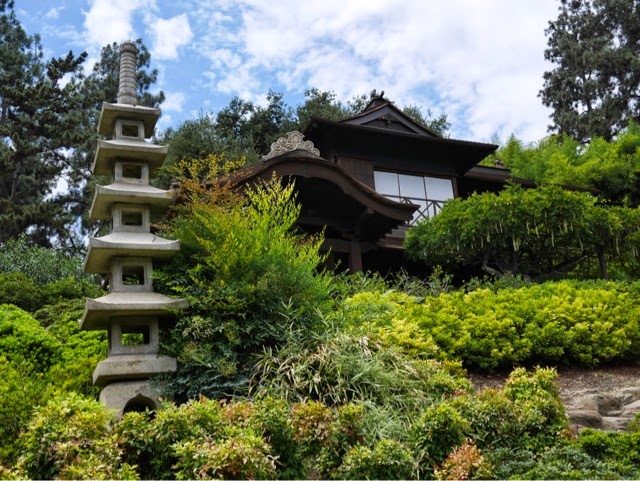 The whole complex is also an educational facility – the library has a number of rare manuscripts – and there is a big Kew-like hothouse with lots of things for kids. The house was huge and a museum now and it was hard to get a sense of what this odd couple was really like. 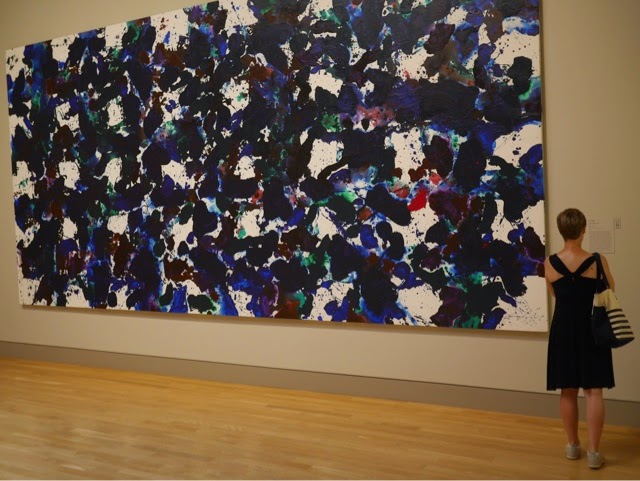