Walking on the wild side

I’m sitting by a campfire under the stars with a moon on the horizon glowing red from the African dust. A hyena is howling nearby and there is a low buzz of voices from the kitchen as dinner is prepared. A South African family left at 5.30 this morning which means the three of us are possibly the only tourists in North Luangwa National Park tonight. It’s been described as the last untouched wilderness in Africa, which sounds a bit hyperbolic, but there is definitely a feeling that this place is entirely devoted to its animals, and people are generally discouraged. Buffalo Camp is completely dismantled when the rains come and built from scratch again the following year, by which time the site has been completely covered by brush and grass.

Our alarm this morning was someone standing outside our reed hut saying “Knock knock, wake up”. But P and I were already awake and listening to the astonishing numbers of birds. One in particular had a very complicated refrain it repeated three times in a rising crescendo. A few repeats later it would change its song slightly. Eventually another would answer somewhere in the distance and the one near us would fly off. 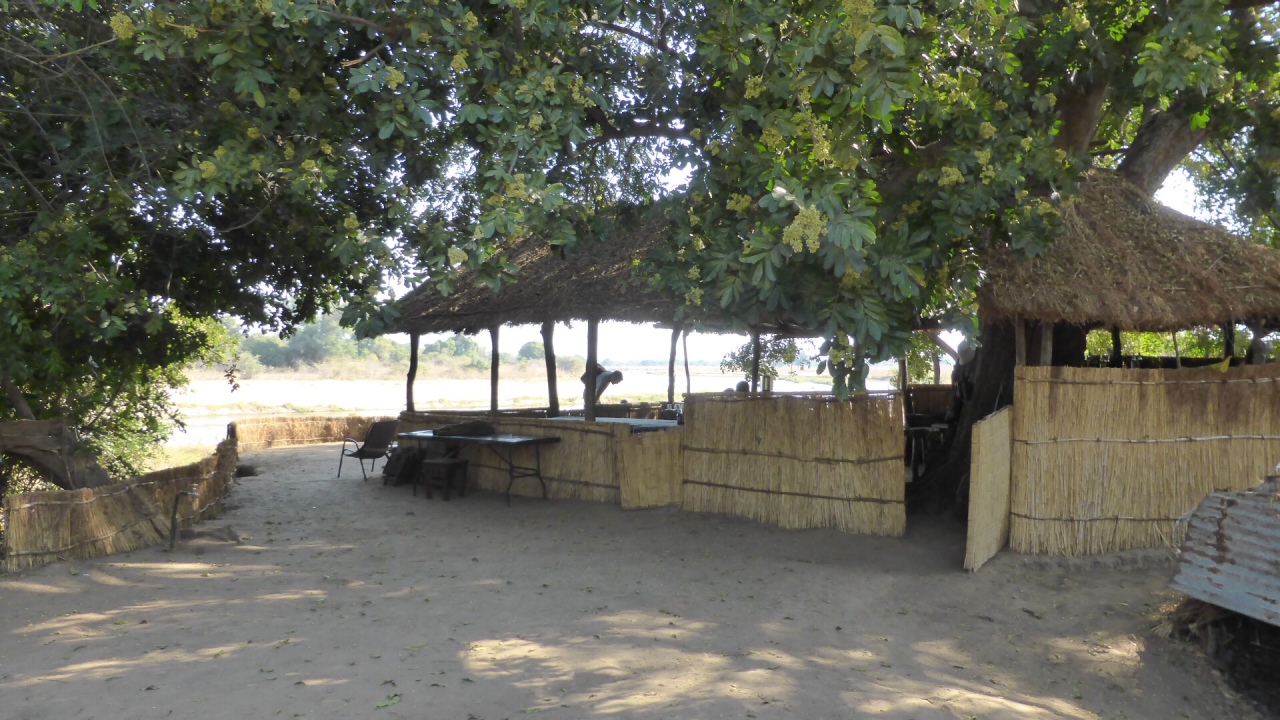 The pattern at Buffalo Camp is a light breakfast, then a game walk, then brunch. So after corn flakes and toast at 6.15 we climbed onto the vehicle for a ride to Zebra Plain, from where we would walk back. The air was chilly as the low sun had yet to warm anything up. Everything was lit with a golden glow and long shadows. We weaved through elephant grass two meters tall and as we emerged from one patch we saw three male lions lying down in another, ahead of us. They weren’t panicked, but decided to move deeper into the grass, becoming invisible almost immediately as the grass closed around them.

A little further up the river, we all climbed out and took our shoes and socks off to wade across. It seems unusual now not to see hippo and crocs in the water but it’s too shallow for them here so we cooled our feet in the water.

On the other side Julius demonstrated the ferocity of an ant-lion by putting a live ant into the burrow entrance.

There was a puff of dust and it vanished. The ant-lion strikes again. It is an odd looking little beetle which lives for two years, catching and eating other insects.

Julius is a gentle chap who gives the impression that he grew up as part of this landscape. He made Tom a plaited hat decoration from a variety of sisal plant which they use to make belts.

We saw zebra on zebra plain – a species that have only black and white stripes, not the dun coloured shading between them that others have. They looked very sharp.

At times we were walking through the same kind of elephant grass that we had seen the lions emerge from, which gives you pause for thought… Kofi thought they were tracking some buffalo on the other side of the river. We watched three of them grazing, but none of them became lunch while we were watching anyway.

To get back to camp we walked through a little patch of marsh where Emma told us later, there was a lone crocodile which had decided to stick it out in the Mwaleshi. 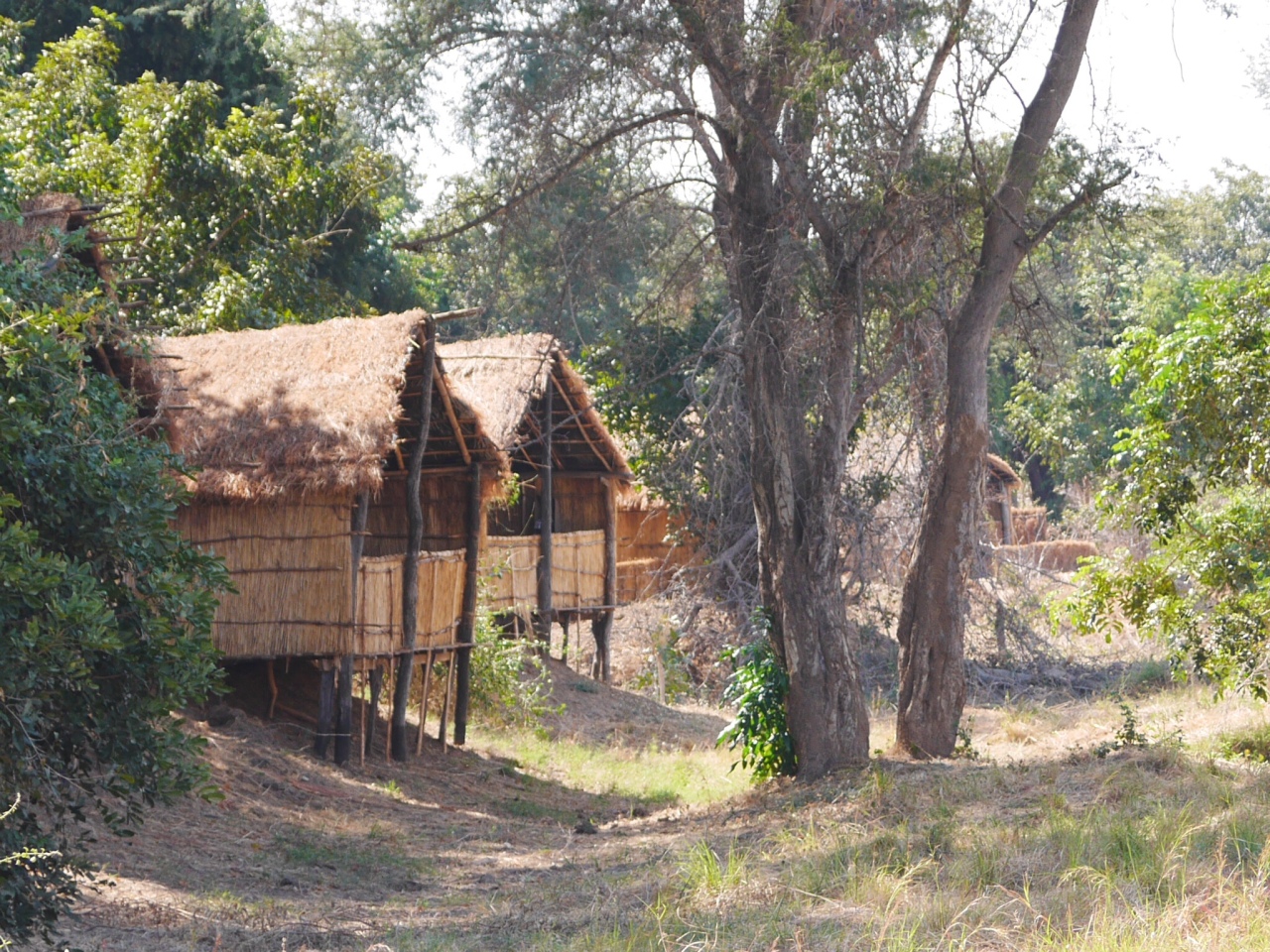 Back at Buffalo Camp

We had the middle of the day to ourselves, looking out over the plain with impala keeping cool in the shadow of trees. It was nice to be still and absorb it all and recharge a bit after our intense day yesterday. Philippa had a sleep, Tom did something electronic and I went through photos. Everyone else in the camp appeared to be resting too.

Three o’clock brought tea and banana bread before we set out for our final bush walk. Again we drove to the start and when we arrived, an elephant was lurking behind a tree which got the guides a bit agitated. It was the same one we’d seen yesterday and is known as Grumpy Charlie. Apparently it comes to check out the food store at the camp and has to be driven off. Mark the boss has known Charlie for thirty years and the last time Charlie came to see what he could steal, Mark went out to have Words with him. Charlie charged at him before backing off and moving away, turning at the last minute to come back and kick a building over in a display of elephant petulance.

Shoes and socks off again, at speed, as the guides wanted to hustle us across the river, before Charlie got grumpy. But Charlie was in an agreeable end-of-the-day sort of mood and watched us cross with only passing interest.

And Charlie was the last bit of wildlife we saw for about ninety minutes. We crossed a huge plain which was obviously well used by animals but not this evening. We found a rhino print and rhino dung but no rhino. Just before we crossed back over the river we saw a family of elephants moving through the trees at the edge of the water. They were clearly coming for a drink so Kofi again hustled us across the river and out of their path.

That’s the curious thing about a game walk I suppose. You want to see the wildlife, but not get in its way. Still though, there was an air of disappointment about the walk. I think they had been looking for rhino but it wasn’t to be. The vehicle was waiting to take us to watch the sunset by a watering hole and it was all a bit quiet as we drove. But as we reached the muddy patch of water, all three guides suddenly became animated. There by the water was a leopard. She let us watch her for only a moment before flouncing off, snapping at the flies buzzing around her.

That lifted us all and we were buzzing over the excellent gins and tonics and Fanta and popcorn as the sun slid pinkly below the horizon.

On the road back, Julius swept his torch over the road ahead of us and we thought we saw the lights of Buffalo Camp, but in fact it was the reflected eyes of a herd of buffalo, all leaping across the road, kicking up the dust.

Lions, leopard and buffalo all in one day.