Monks, misdirection and a Manor House

Today was the day we had to leave Buffalo Camp and cross the North Luangwa National Park to our designated exit gate (according to the form in triplicate). From there we would go to the Great North Road and our first tarmac in a week. This then, would be a straightforward sort of a day. After all, we were in a National Park where we could follow the track with a map given to us by the ranger, and then we could continue west to hit the main road. Simples! We had visions of bowling up to Kapishya by lunchtime, with the tents already up and an afternoon of lounging in the hot springs ahead of us.

We were on the track by half past seven, a tiny dot of a vehicle in a huge landscape. We kept our eyes peeled for rhino. The South African family had seen one as they came in this way and there’d been one across the river from the camp a few days before, but even though their numbers have grown thanks to the protection efforts, they are still very very few. And that’s due entirely to the – apparently wealthy and deluded – Chinese and Vietnamese idiots who’ve been fooled into thinking that rhino horn will do wonders for their libido. And even if that were true can there be a more nonsensical way of eradicating a species? It is profoundly sad.

There is still a big debate about allowing trophy hunters (not for rhino) to pay vast sums to come to Zambia and kill a big animal of some sort. I can see the argument from the authorities point of view, as it means more money goes into conservation.What I can’t understand is the mentality of someone who wants to come to a place like this, specifically to kill one of these wonderful creatures. Apparently there was a Texan called Victor at Buffalo Camp the other day who’d flown in by helicopter and announced proudly that he was in Zambia “to shoot a hippo and a croc”. What satisfaction he gets from killing a big animal asleep on a river bank I simply cannot imagine. What a pathetic little man.

I was pondering these thoughts as we scanned the scrub for rhino wondering how many we may have inadvertently passed as they stood one side of a bush as we went by on the other. In any event, rhino saw we none. And that I suppose is a good thing and those poor creatures should avoid people like the plague.

With no T4A satnav map to follow, the park map was our bible and puzzlingly none of the marked features seemed to appear and the track got worse and worse. We came to a big T junction which wasn’t marked and we took a turning left (the direction of our destination) which ended up at a choice between a river crossing or continuing along the bank. Some guys in a pickup were filling a large drum with water and we flagged them down. “Can we get to Mano Gate this way?”. “Yes, but you have to go across the river, find a right turn, then two more river crossings. It’s quite difficult”. “Do most people go the other way?” “Yes”.

Ok so retrace our steps, an elephant crossing the road in front of us, and back at the junction we took the other turning which is actually signposted “Mano Camp”, but that is marked on our road map as separate to Mano Gate. Well, live and learn and this track too got steep and rough and “Can this really be it?”. It was.

Half an hour of jolting later we arrived at the exit from the rhino protection area. We stopped at the gate and an impeccably polite young man came out to check our paperwork. He introduced himself as Collins. We told him how much we liked Zambia. “I like your country very much also”, he said “I have never been but I would like to go”. I told him I was surprised how rough the park road was and he looked concerned. “The route ahead is over the mountains” he said, suggesting it too wasn’t exactly a four lane highway.

The track was steep and rutted and low gear 4×4 all the way but at least we knew we were going in the right direction. Until we arrived at a crossroads which was signposted back to our pontoon one way (definitely no) and to a place unmarked on our maps the other (maybe) but nothing at all for the direction we thought it must be to the main entrance to the park. We took that turning anyway and found ourselves jolting over a steep rocky track that narrowed to the point that we were in “This can’t be right can it?” territory. But it was.

Confirmation came with a grass airstrip half an hour later that was marked on the map. Eventually we reached Mano Camp; a large village with mud brick houses with tin roofs. Washing in primary colours swung on lines and people were carrying things at the roadside.

At Mano Gate we did the whole signing out thing again and got advice about the road to the next village, Mukungule, where there was an important junction.

Mukungule turned out to be a rather flyblown sort of place with a main street lined with rackety little shops and people sitting about. According to our map there were three possible roads out, one of which would take us to the junction with the great North Road at Chitembo. At the far end of the stretch of huts the road split. It looked like we wanted the right hand track but we asked one of the locals: “Chitembo”? We asked hopefully. He nodded and pointed and, foolishly, we felt reassured. It was a good sized track and there was even another vehicle on it so it went somewhere, but the line on our satnav eventually suggested it wasn’t quite the right direction. We were heading in fact to the village of Katibunga, dominated, said the guidebook by a large mission run by Tanzanian Monks. Katibunga, said the map, also had a road to Chitembo, so all was not entirely lost.

Katibunga seemed a green and relatively prosperous looking place, surrounded by lush green fields. Irrigation pipes threw sparkling streams of water over them. And looming over it was a vast church, part of the mission complex. We went looking for our road to Chitembo, passing through another raggedy Main Street. We found a turnoff and asked a couple of girls: “Chitembo?”. They looked at us blankly. We tried every variation of “Chitembo” but nothing. We asked a couple of young lads “Chitembo?” More blank looks. Then we tried the name of the other destination reached by a road going from the village “Mpika?” Yes, there were nods and points. We’d found the road to somewhere we didn’t want to go. It is also on the Great North Road but much further south. Philippa sensibly suggested we went to the mission and asked there so we drove back and pulled up in front of a white plastered building with a little shop. Once inside a young man in a brilliantly coloured shirt followed us in and said “Hello, I am Father Deogratius. Can I help”. With a name like that, if he couldn’t help, no one could. We dug out our map and pointed to Chitembo and the Great North Road and he too looked blankly at “Chitembo” and said the road we needed came out somewhere called Lwanya and there was no direct route. We would have to drive all the way back to Mukungule and find the turn we’d obviously missed. But first, he showed us his church.

It was a vast airy building with coloured glass in the windows, packed with plastic chairs. “We hold two masses on Sunday and the church is full” he said proudly. “There are people standing at the back and others who have to sit outside because there is no room. We want to build an extension but first we must finish the clinic”. The monks are building a medical clinic across the street and clearly the mission is the anchor for the whole community. We would never have seen it if we hadn’t got lost.

Father Deogratius bade us goodbye with the softest of handshakes and we bounced off to Mukungule. Again. And once there we found the track and asked someone “Lwanya..?”. “Yes this is the correct road for Lwanya. Travel safely” said a man at the roadside with a wave.

And sure enough it was. After another hour or so we arrived at the place called Lwanya, not Chitembo, turned right onto the Great North Road and the heavenly smooth, silent tarmac.

77K later we turned off for Kapishya onto a red dirt track through tall, beautiful woodland. 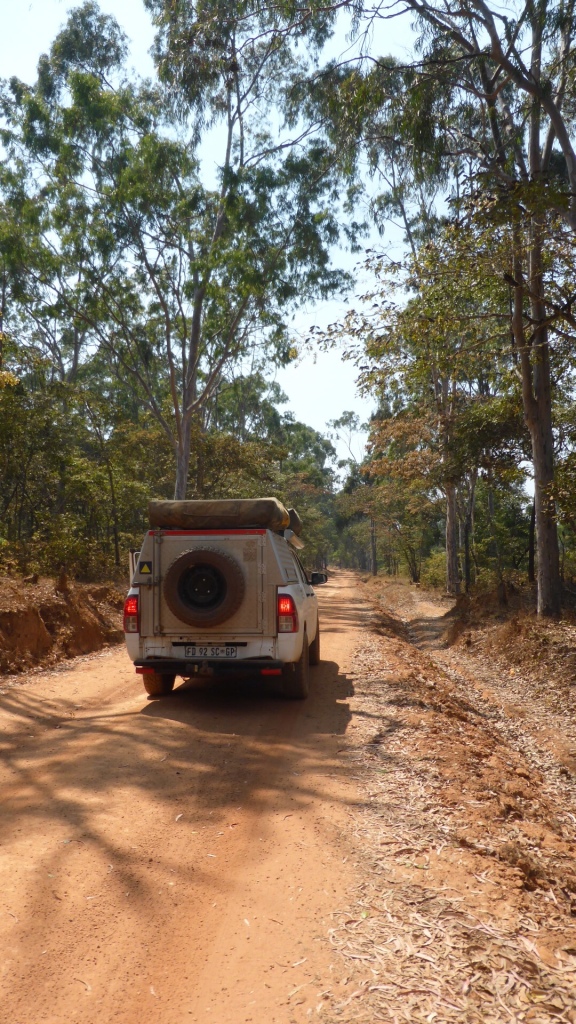 This was the estate of Sir Stewart Gore-Brown one of Zambia’s most significant figures, credited by Kenneth Kaunda as helping to establish a peaceful transition to independence. But before that he was something of a romantic adventurer who decided in the early 1900s that he would build a grand house in a spot with sweeping views down to Shiwa Lake. That the place he chose was miles from anywhere in the middle of the bush did not phase him and with his – increasingly estranged – young wife he created an English style estate in the heart of Africa, complete with farmland and various, doomed, business ventures. The whole story of Shiwa Ngandu is charted in Chris Lamb’s bestseller “Africa House”. When we told Chris we were coming out Zambia she said we had to visit, and indeed we did. And we will, tomorrow.

But we were staying a little further on, at Kapishya, named for the hot springs that the Gore-Browns liked to go to. The lodge they built there is now open to visitors, run by Sir Stewart’s grandson Mark, who is also one of the region’s more notable characters. Our four to five hour journey had taken six and a half hours and we were all flagging by the time we got there. We sat at a table by the river having our Buffalo Camp packed-lunch and not saying very much. Mark and his wife Mel found us and revived our flagging spirits with their friendliness and enthusiasm. We would meet later for dinner. But first we found the campsite, got set up and made our way to the hot springs.

The springs come up in a broad sandy-bottomed pool surrounded by trees, and oh my word, that clear, warm water was a treat for three weary people.

Dinner that night was a lively affair at the long wooden table in the lodge. The lodge itself is a throwback to a bygone age full of dark hand-carved wood. We were joined by five other people, with Mark and Mel holding court in the middle. They are fabulous hosts, and had some hilarious stories of their adventures at Kapishya and at Buffalo Camp which Mark also runs. Between them, they are keeping the adventurous spirit of the Gore-Browns going, in what is still a remote spot. There was much laughter and a fair amount of wine. We were joined after dinner by some of their large collection of dogs who greeted everyone before filing back out.

Back in the tent we had the unusual soundtrack of a rushing river, to lull us to sleep.