It’s half past seven and under a full moon I’m watching a hippo wade up the river in front of me like some kind of overweight dinosaur. P is making us all hot chocolate and the camp fire at our feet is being fanned by a stiff wind, blowing showers of sparks along the river bank.

There are about sixty hippo in this bit of river – actually the confluence of two rivers: the Luangwa and the Mwaleshi. Off on the far bank we saw two big elephants when we arrived and one was trumpeting angrily. This is really quite the spot and not at all easy to get to. The last bit required an armed ranger to guide us, but I’ll come to that. 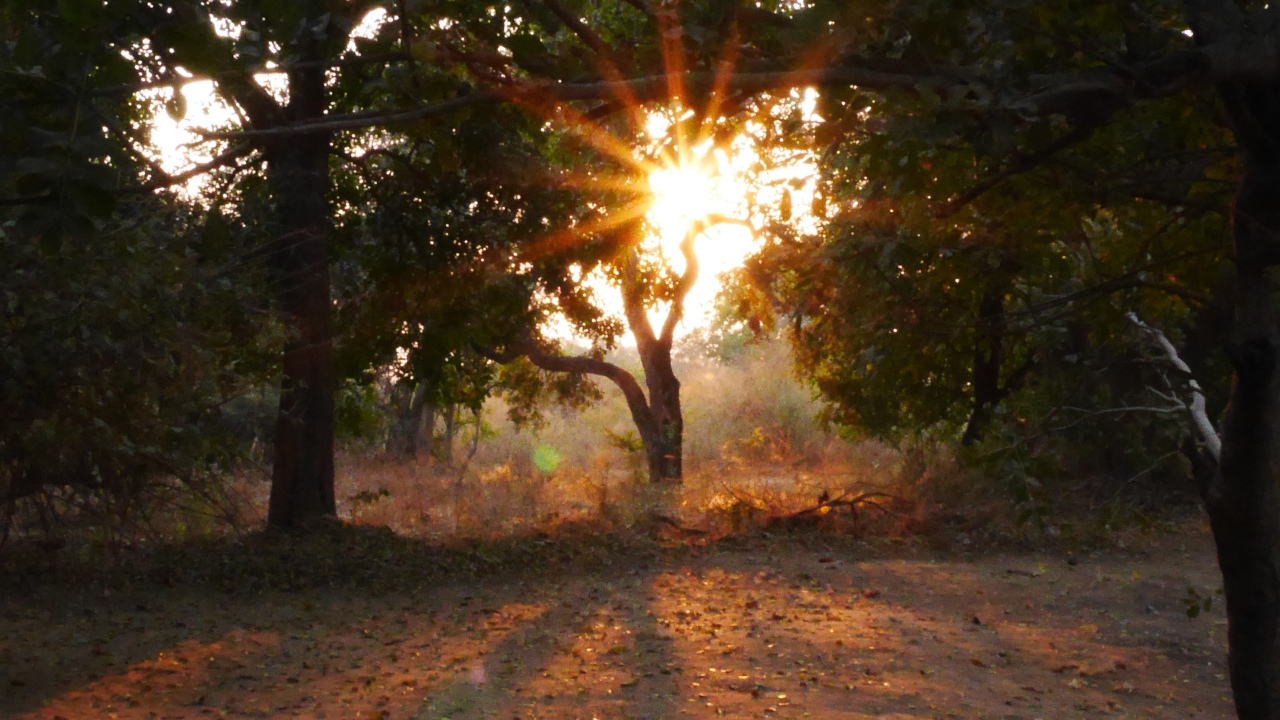 It was an easy start to the day with the usual assemblage of trilling birds and monkeys leaping about in the trees to act as a wake-up call. Despite the chance of a lie-in we were still up before 6.30. Well, two of us were.

Shafts of sunlight pierced the tree canopy and we had banana porridge looking out towards the river. Later, I was surprised to find mussel shells on the beach down there.

Wash up, pack up and off. Back to the trusty D104, heading north. 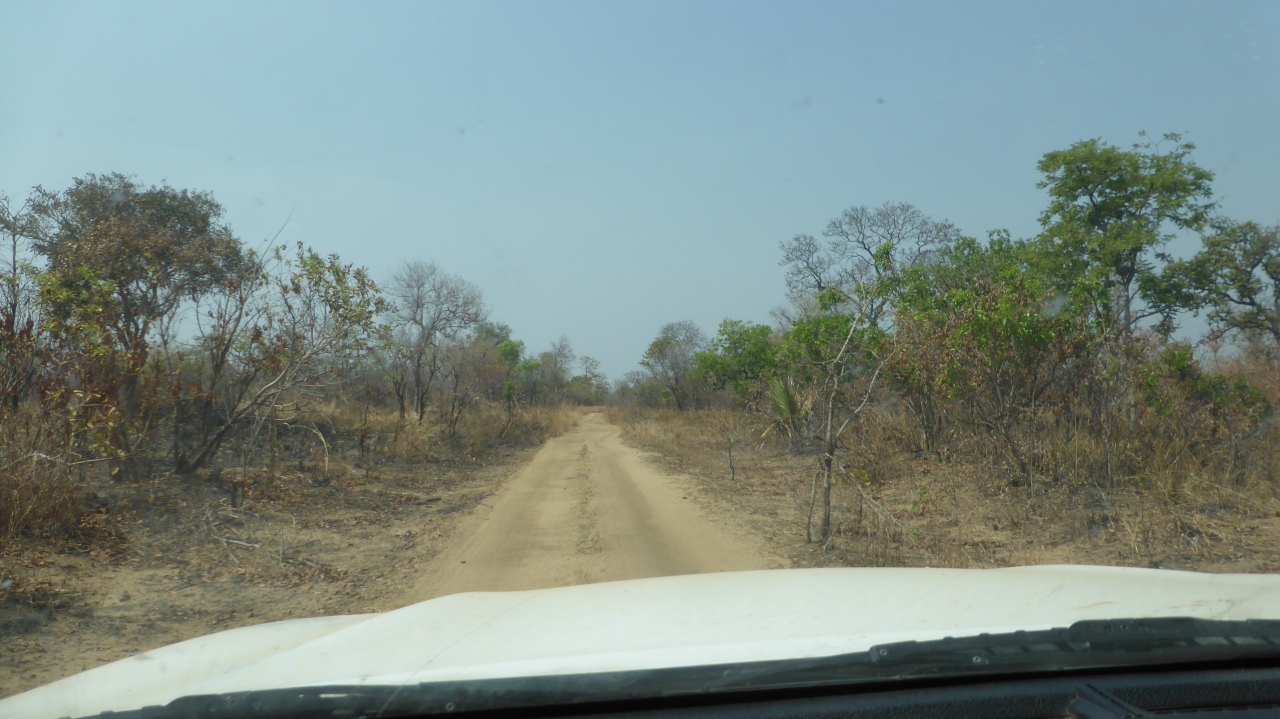 Sometimes the woodland we pass through seems European with big mature trees and little stands of beech with coopery leaves. Then we pass palms and marsh or fields which have been burnt off after the growing season.

We’ve encountered virtually no other traffic during the bush drives but coming the other way was another 4×4 with a tent on the roof and I pulled over to let them pass. They stopped alongside and we chatted. They were a couple a bit younger than us, travelling for a year around Southern Africa. They’d set out from South Africa and already been through Zambia just after the rains before heading to Namibia Rwanda, and Uganda. They were now doing our Zambia route in reverse and we swapped notes about our experiences. It was so good talking to like-minded people and we chatted for about fifteen minutes. We swapped blog addresses and set off again in opposite directions. P and I both wished we’d been going the same way as it would have been nice to spend more time with them

At the Chakolwa Gate into the Luambe National Park we shook hands with the ranger “Major” and gave him all our details. There is a handshake here that the Zambians do and we don’t, which I will have to ask about…unless they are all Masons of course. The park felt like just a continuation of the road we’d already been on though we did see a couple of elephants. And when we found a place next to the river for lunch, a park truck passed by, then turned around and the driver asked if we were OK. “I wanted to check because this is the National Park and there was a chance you had broken down.” We thanked him very much and he left us to our lunch.

Back on the road and there were people around too from time to time. We spotted a young guy – perhaps about twenty – running on the track ahead of us in flip flops with a small backpack. The temperature was 35 degrees and we stopped to offer him a lift. He spoke no English and regarded us somewhat sceptically, clearly trying to work out what the heck was going on. It was only when Philippa got into the back and I patted the passenger seat that he nervously edged in. The seatbelt alarm started beeping and I motioned him to put it on but he clearly didn’t know what I meant and when I showed him mine he was unsure as to how put it on. We took him about five K to the Chipuka exit gate where we had to sign out. We motioned to him that we would take him on but when we left to see the ranger (who was asleep in his hut) Tom said he clearly didn’t know how to get out of the car and was a bit nervous about it so Tom let him out. Still very serious he said “Thank you Madam and Sir” and vanished up a track.

At Chitungula we left the D104 and the track became even more “minor”.

There is a point in every trip like this where bits of kit malfunction and luck sours a little. We had clearly reached that point as the truck’s air condition had decided it didn’t want to play any more, which meant driving with all the windows open in 35 degrees, battling heat, flies and dust. Then the satnav with its Tracks4Africa maps showing us every detail of every track and river crossing suddenly blacked out having got too hot. I took the batteries out, cooled it off and restarted it to discover that while it knew where we were and could show us the general topography it didn’t know where the tracks were any more. This was very odd as it could still see our destination, just not how to get there. Thankfully we had a good paper map and some details I’d printed out about the route but it was annoying and concerning as we still have hundreds of km to do over these tracks.

On top of that, the fridge has gone into overdrive thanks to a thermostat that thinks it’s warmer in the fridge than it is outside. This is fine apart from the fact that when we stop, the fridge stays on full time, draining the battery that powers it. P also discovered milk pouring out of our food drawer. A carton of long life had split with all the bouncing and emptied itself over everything. Good smell back there too…

But all you can do is make the best of it, so we did and managed to find the right tracks all the way to Chiweza, where we turned left into a string of thatched-hut villages full of people. The route now was essentially a walking path barely a vehicle wide, as of course it had been carved out by and for people, not cars.

It was a slow 10K drive through this line of villages but interesting to see people living their lives. The villages were all immaculate with neatly clipped thatch and smooth mud walls. The area around them was perfectly flat and swept. There was no rubbish. We passed women separating corn from chaff by pouring it from a basket so that the wind carried the husks away.

We saw a few small solar panels, some powering music players with people sitting around. Others must have been used to charge the mobile phones which several people had.

We were the grand attraction for the kids who swarmed over to us in every settlement. Some were lovely with waves and thumbs up and smiles. Others were little beggars – quite literally – holding out their hands and shouting “sweeties!” as we passed, or running up to the truck to peer in and demand something. It’s very sad that tourists have shaped the way these kids behave and there were a few with black front teeth. As we rolled into another settlement Philippa wondered whether this would be a “hello village or a sweetie village”. 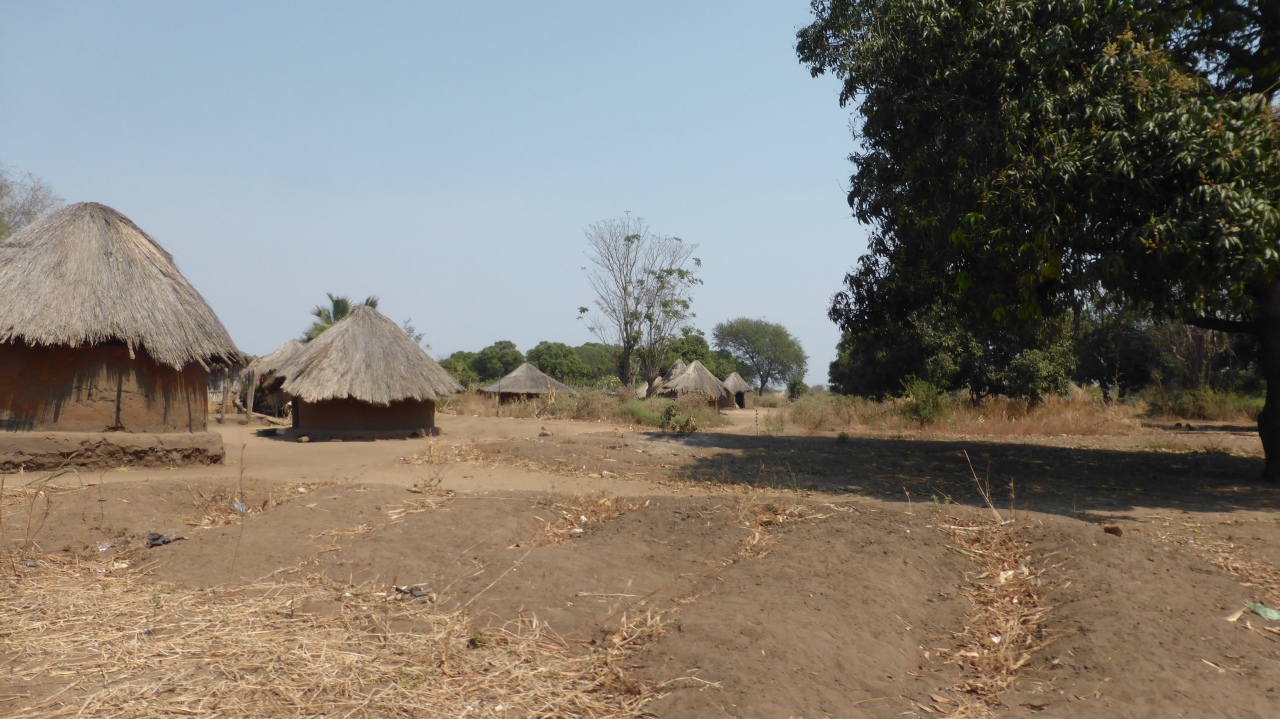 At the end of this line of settlements we were nearly back at the Luangwa River and the Kanunshya Gate into North Luangwa National Park. It was here that we had to sign in again and pick up a scout to take us to our campsite. He appeared dressed all in green with a backpack, a bedroll and a rifle. “There are too many aggressive elephants” he told us. For many years North Luangwa was plagued by poachers and even though poaching has now been eradicated, the elephants have long memories.

The ranger opened the wooden barrier for us and we drove into thick bush and a barely-there track we would have struggled to find ourselves. The scout, (who’s name we haven’t quite got yet), sat in the front indicating the way and occasionally pointing out animals including a big antelope with a furry hump we haven’t seen before .

Kanunshya Community Camp has a flat piece of ground on the river bank, trees all around and a simple oil-drum bathroom as we had at Kalovia. There are three full-time attendants here who will heat water for us and make a fire and generally let us be helpless. It sounds like they also have to spend some time defending the camp from the elephants who like to graze on the thatched chalets a little further upstream thus rendering them uninhabitable, for this season at least. 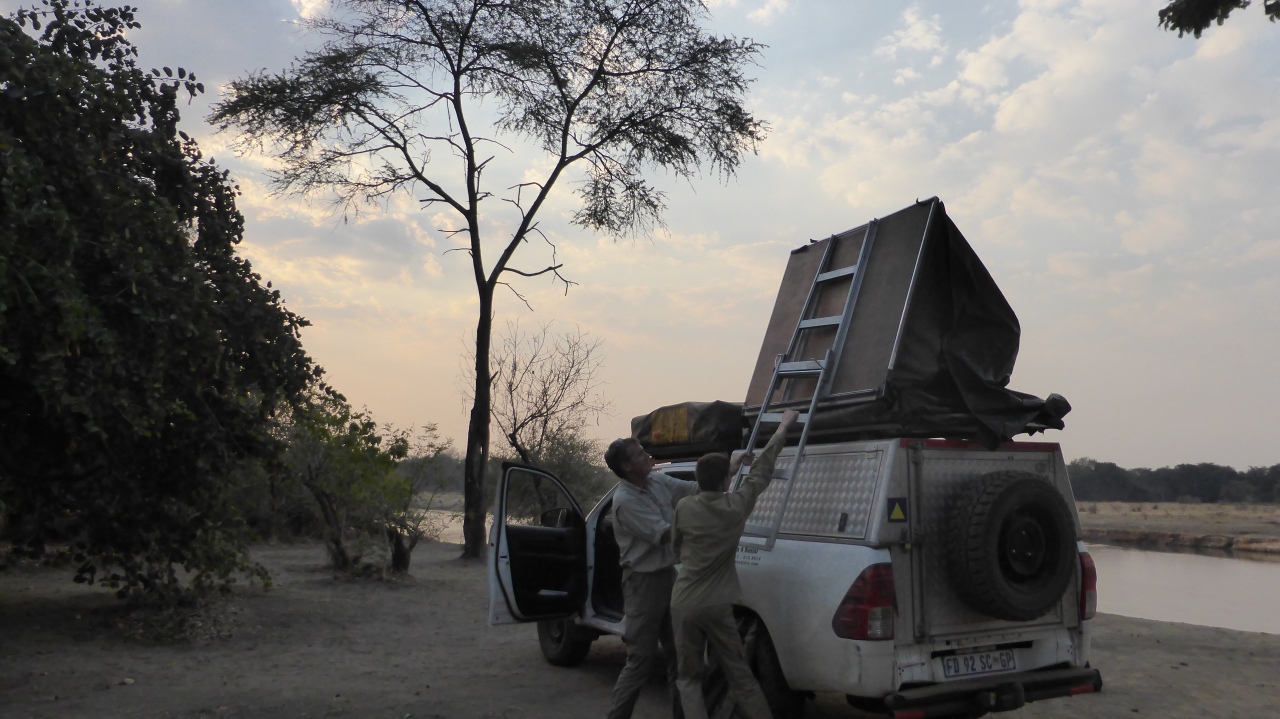 It is a remarkable spot and despite our troop of attendants it feels incredibly remote and special. We are the only campers here.

It was a long day though and after supper we were good for nothing but a little light blogging and bed, amidst a roaring chorus of hippos.