We are sitting in our room in the Hotel Grande Ourse in Trient listening to the wind groaning outside. It has just blown up in a big hurry, and at the point when it started to push things over in the garden we decided to come inside. Apart from the wind and the river and the crickets there is total silence in this room with the three of us reading/movie watching/writing after a heck of a day.
It began early at the Alpina with Madeleine bustling to bring our breakfasts at 7.15 all smiles and “Did you sleep well?” She’s such a lovely person and we shall miss this gorgeous place. It is not fancy, but everything is perfectly done. Last night’s meal was unbelievably good. A rich mushroom tart with a blob of whipped cream full of chives to start, then lamb falling off the bone on a bed of couscous and tiny vegetables steeped in gravy and finally the remaking of what Madeleine said was an old French classic “oeuf de la neige”. Egg whites whipped with lemon, on top of a passion fruit mousse, sitting on a banana and vanilla cream. We were all rendered speechless. Tom told a Madeleine (in French) that it was the best meal he’d had on this holiday. She beamed. To be honest it was one of the best meals I’ve had full stop. She’d made us packed lunches too – boiled eggs with potato salad and roast beef (cheese for P).
It was sad to leave such a friendly, exceptional place. We were on the road at eight walking along Champex’s little lake. Where I discovered my camera battery was dead. All pix courtesy of my iPhone or Philippa. 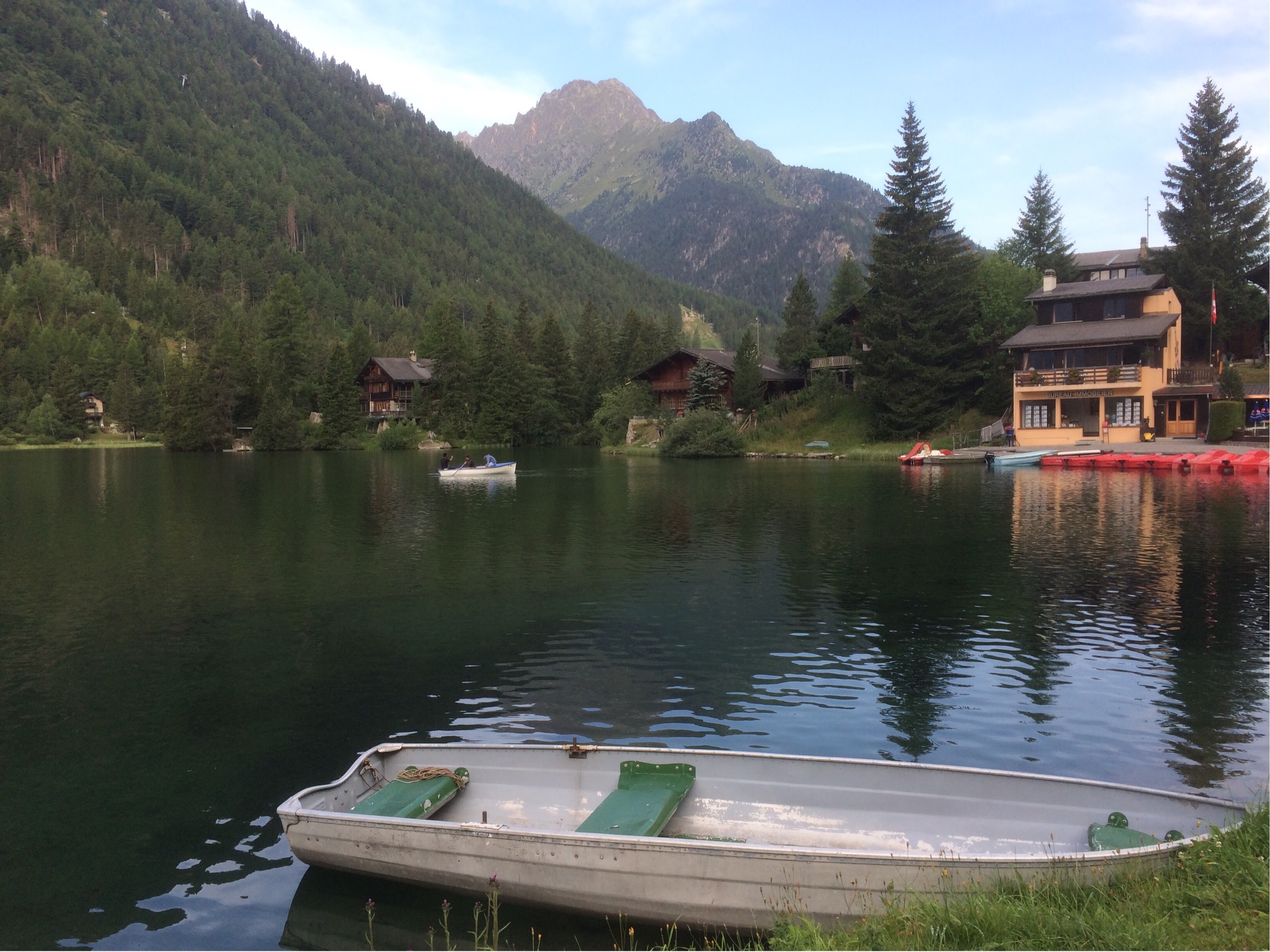 Then up beside streams, through the trees. 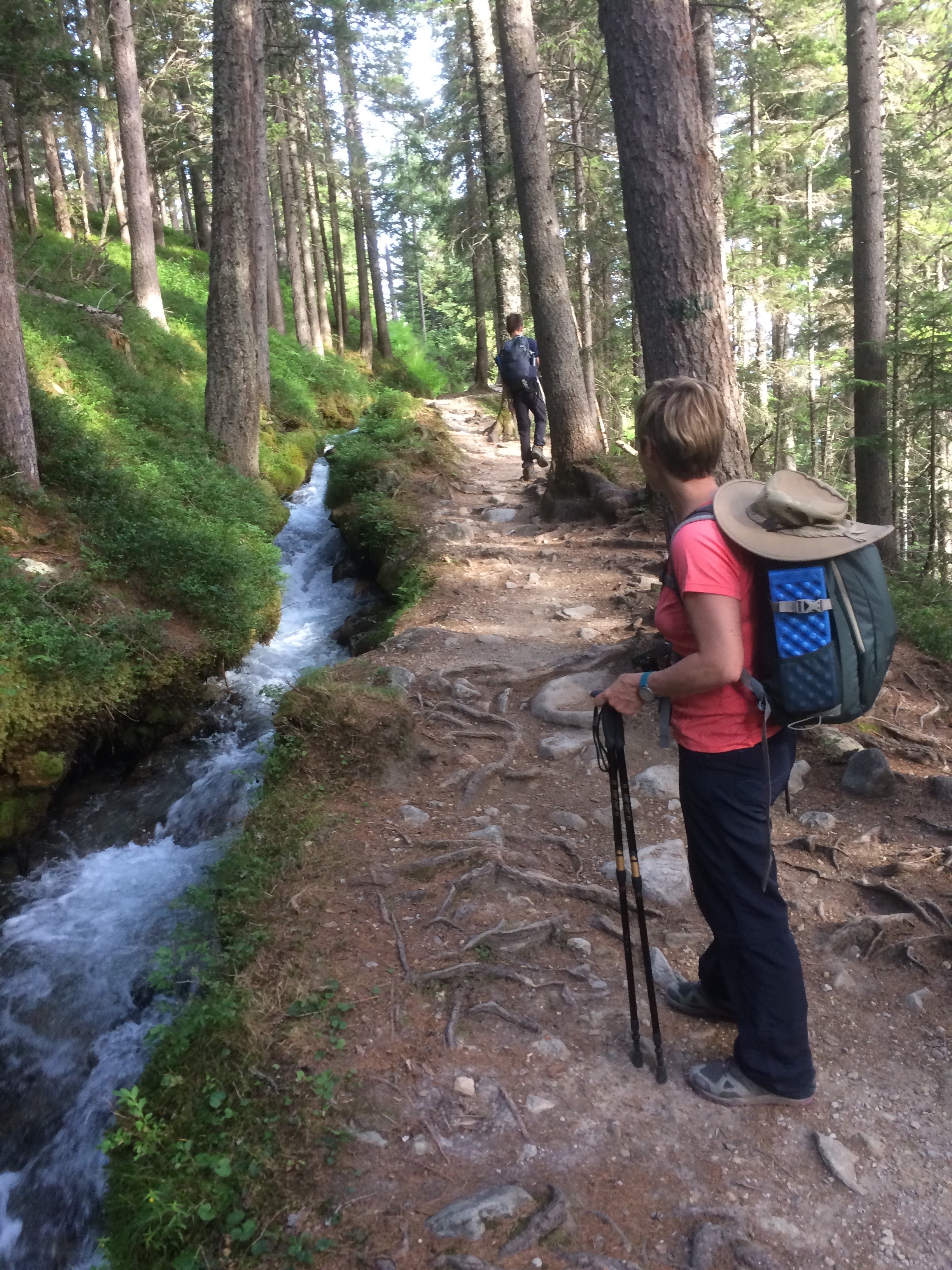 After forty five minutes or so we stopped at a refuge to fill our water bottles and take stock of the trail ahead. 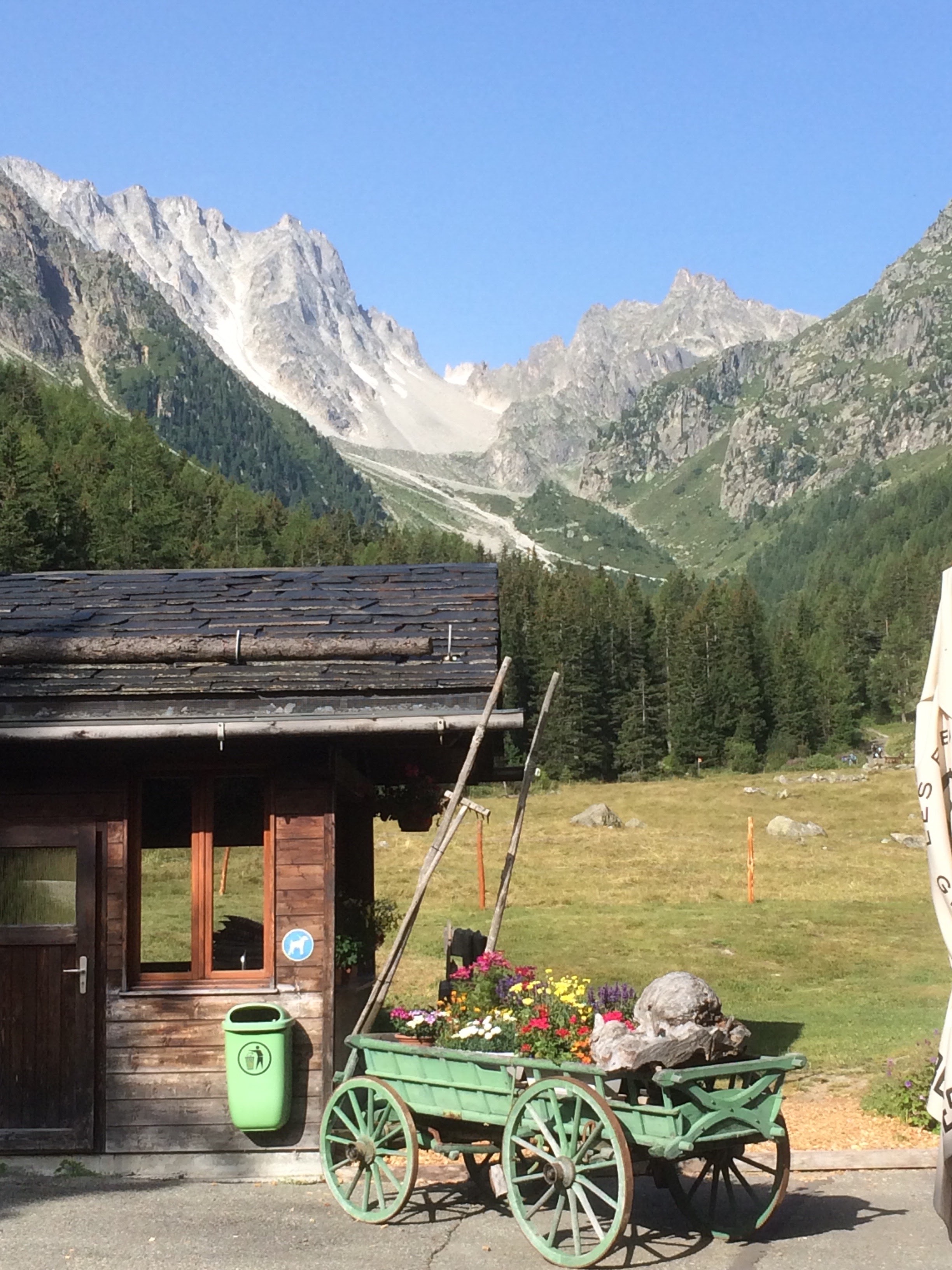 Today we are taking a TMB Variante. Ignoring the unfortunately named “Bovine” route and crossing a high mountain pass – the joint highest on the TMB along with the Col des Fours. It is the Fenetre d’Arpette and It’s a little notch in the ridge you can see in the picture above. It’s supposedly the toughest pass of the whole TMB. 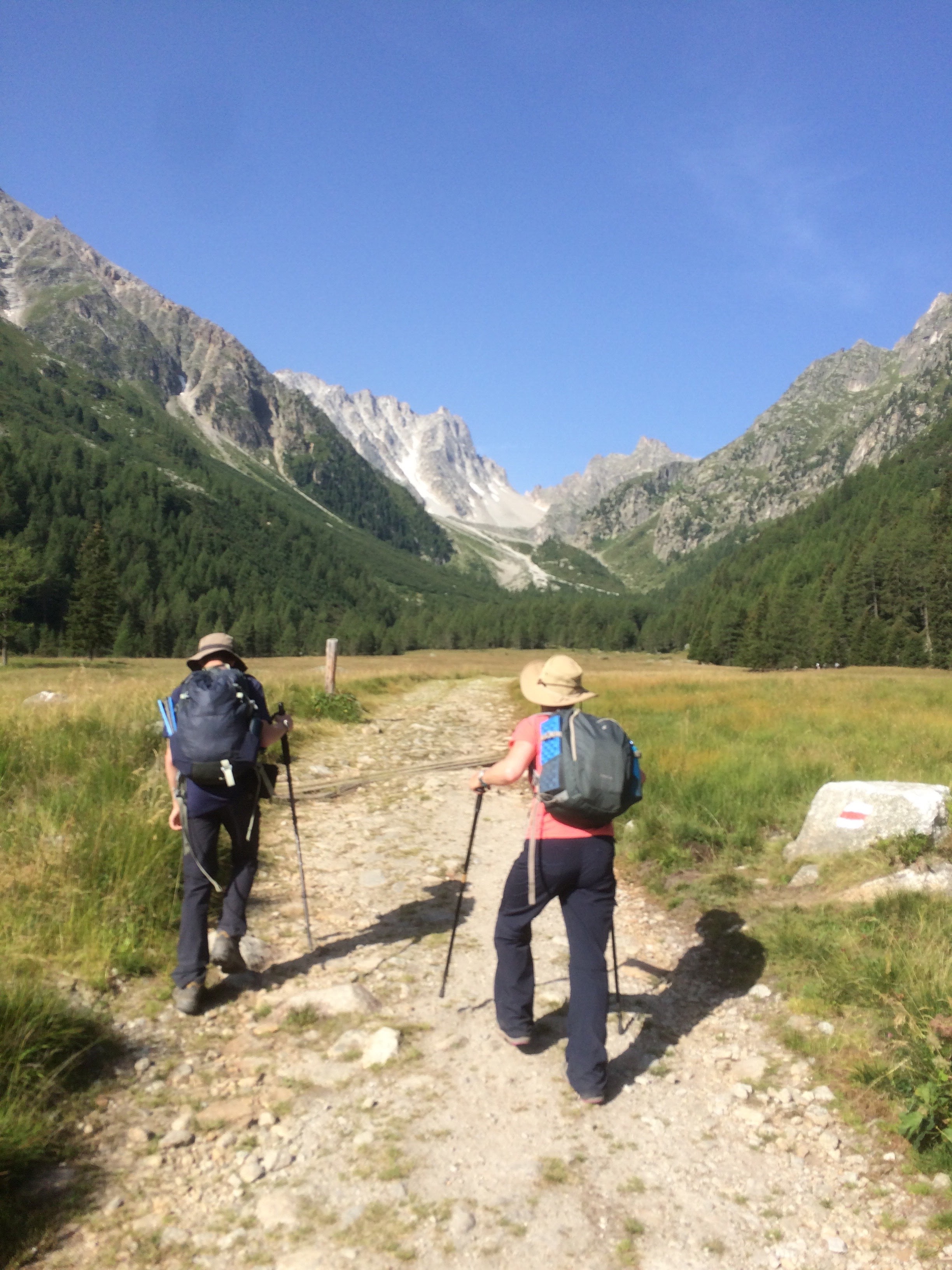 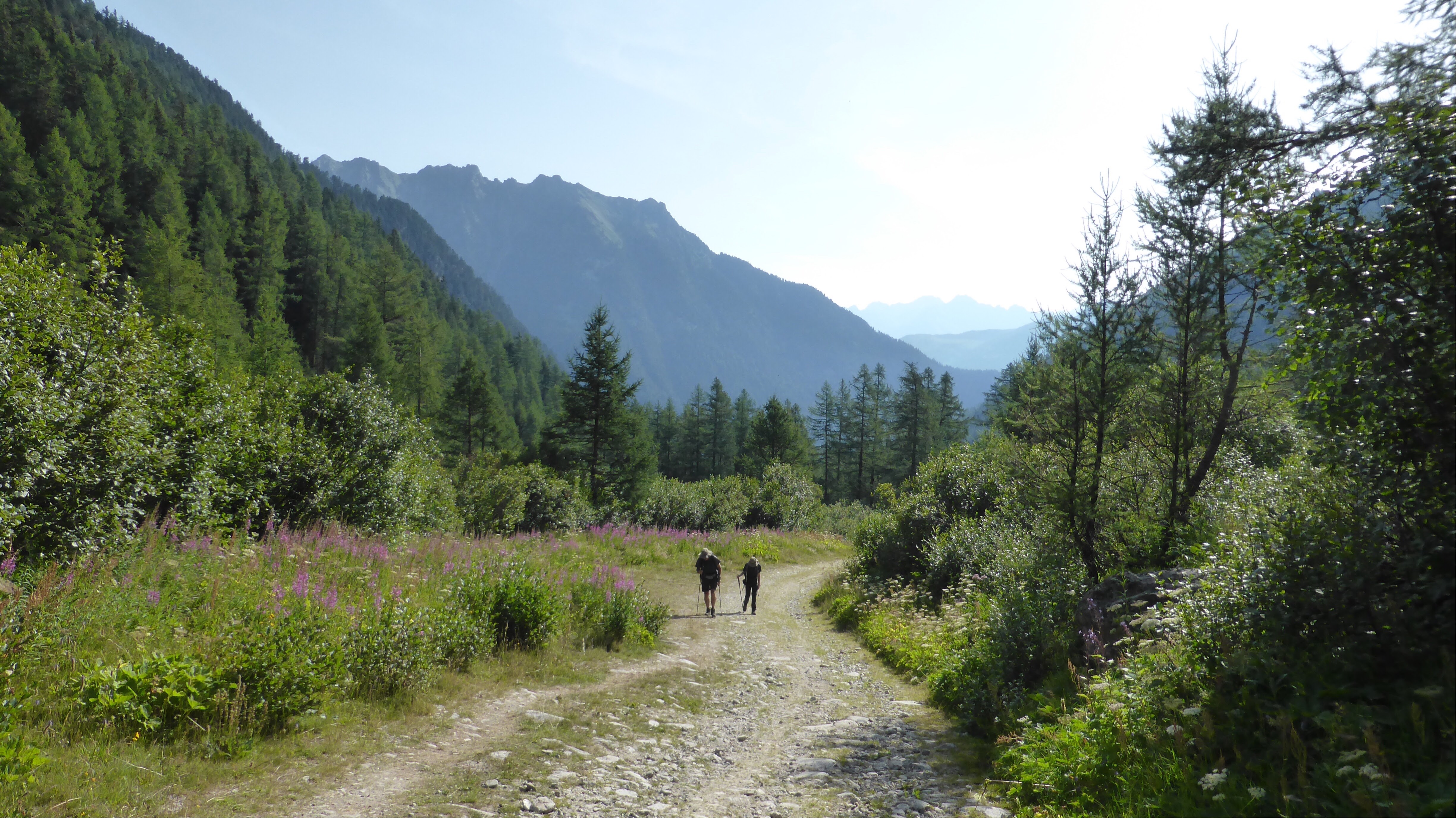 To start with the walk was gently uphill through fields in hot sunshine. There were no clouds and no wind and we baked. Of course as you get closer to a mountain, the more of it there is to climb… 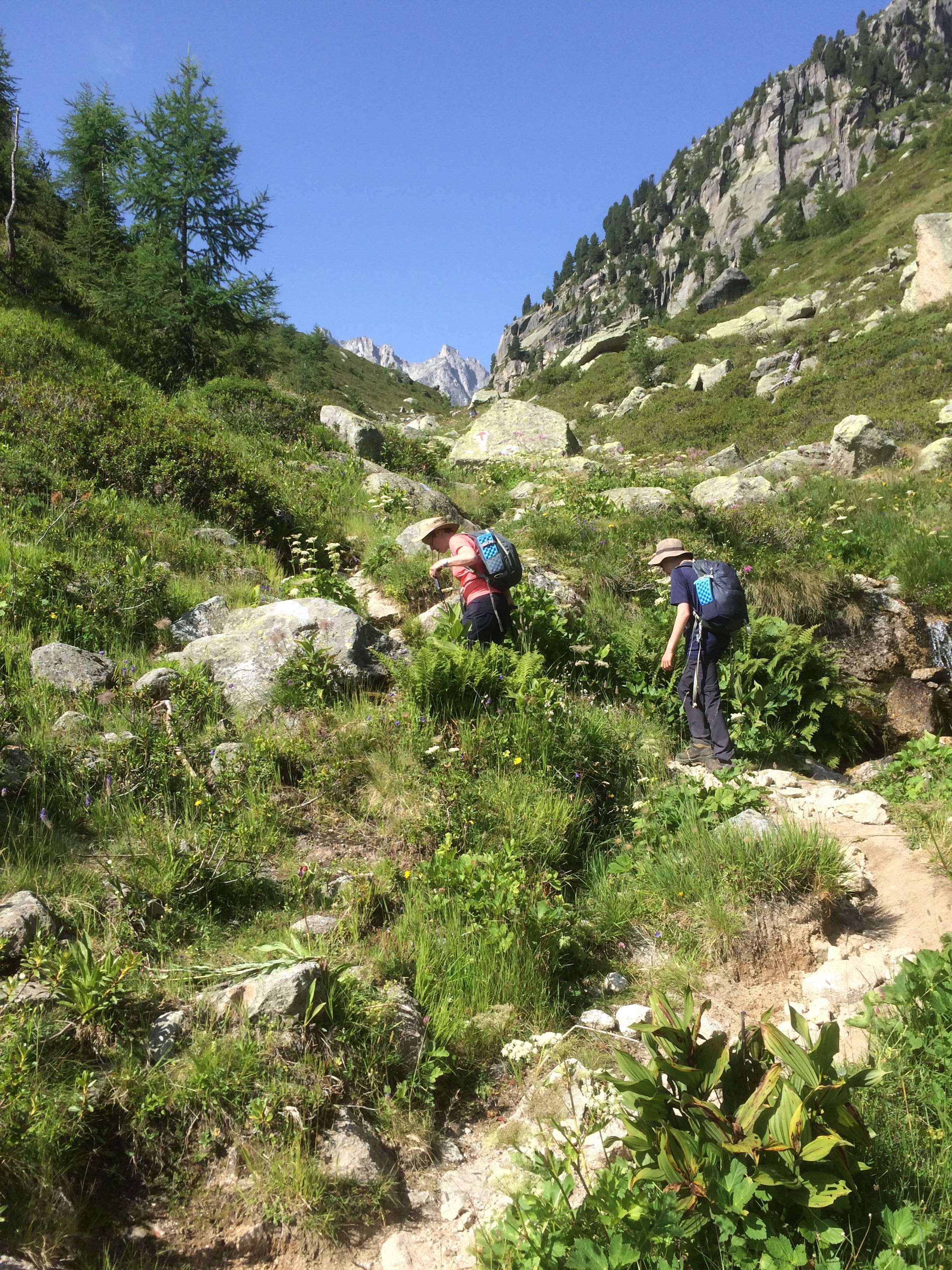 The trail began to get steeper and soon we came to a vast boulder field. The trail came and went, signified only by splashes of red and white paint but how we chose to hop over the boulders from one painty splash to another was up to us. 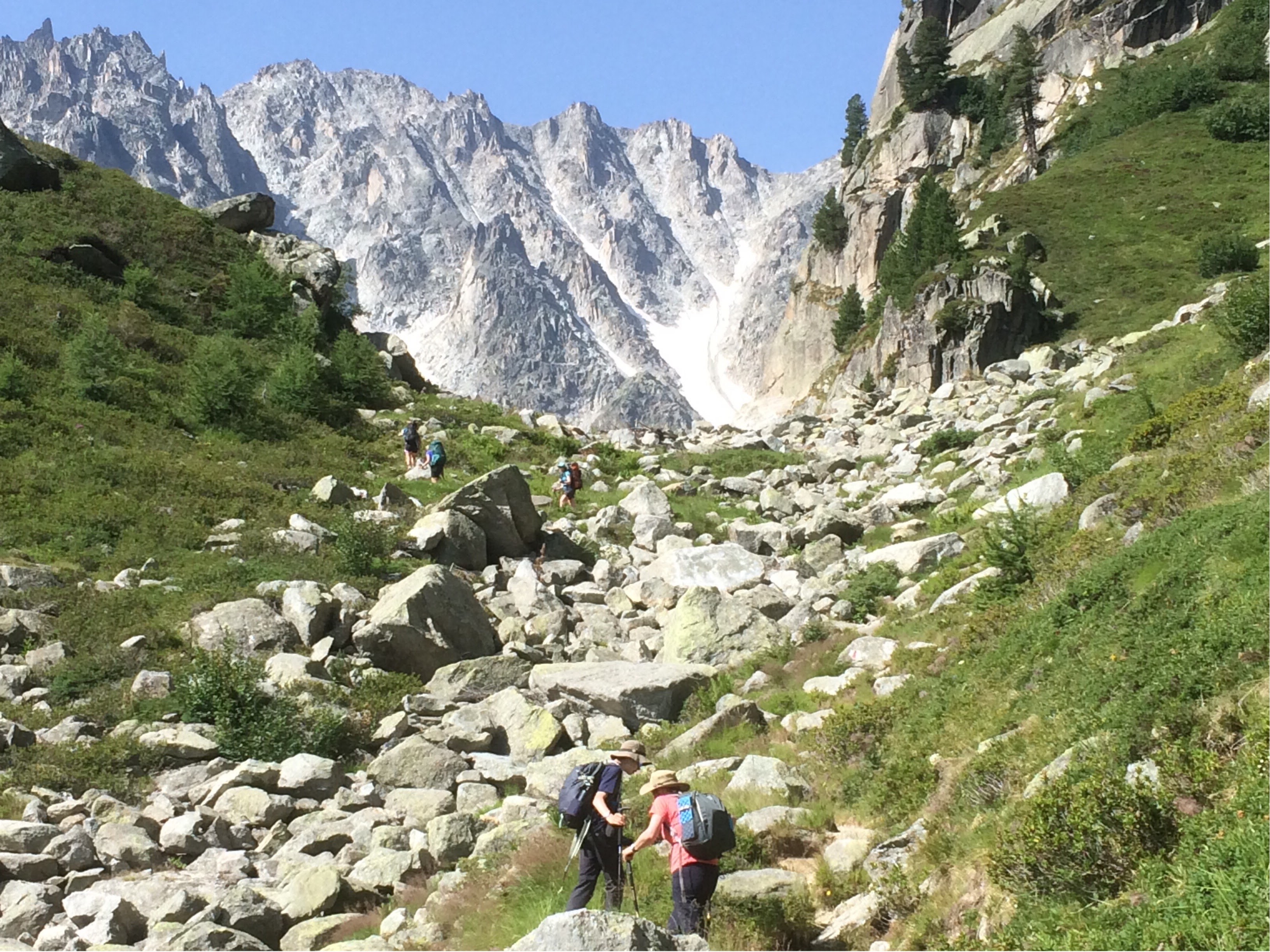 It was so steep that at times we had to use our hands to haul ourselves from one boulder to the next, our poles rattling behind us. 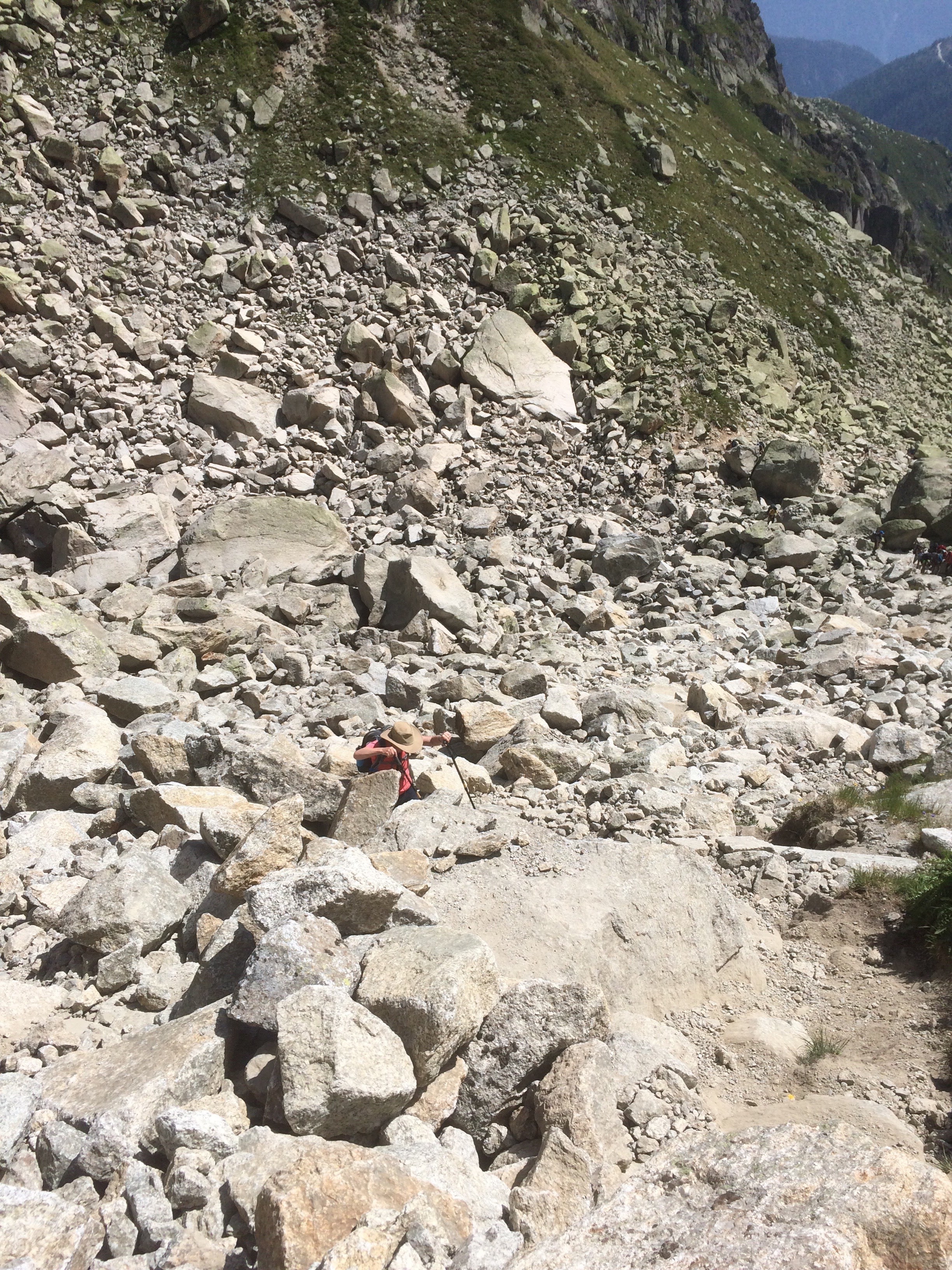 The final thirty minutes was over loose rocks and grit on a range of tracks which zig zag up to the ridge. 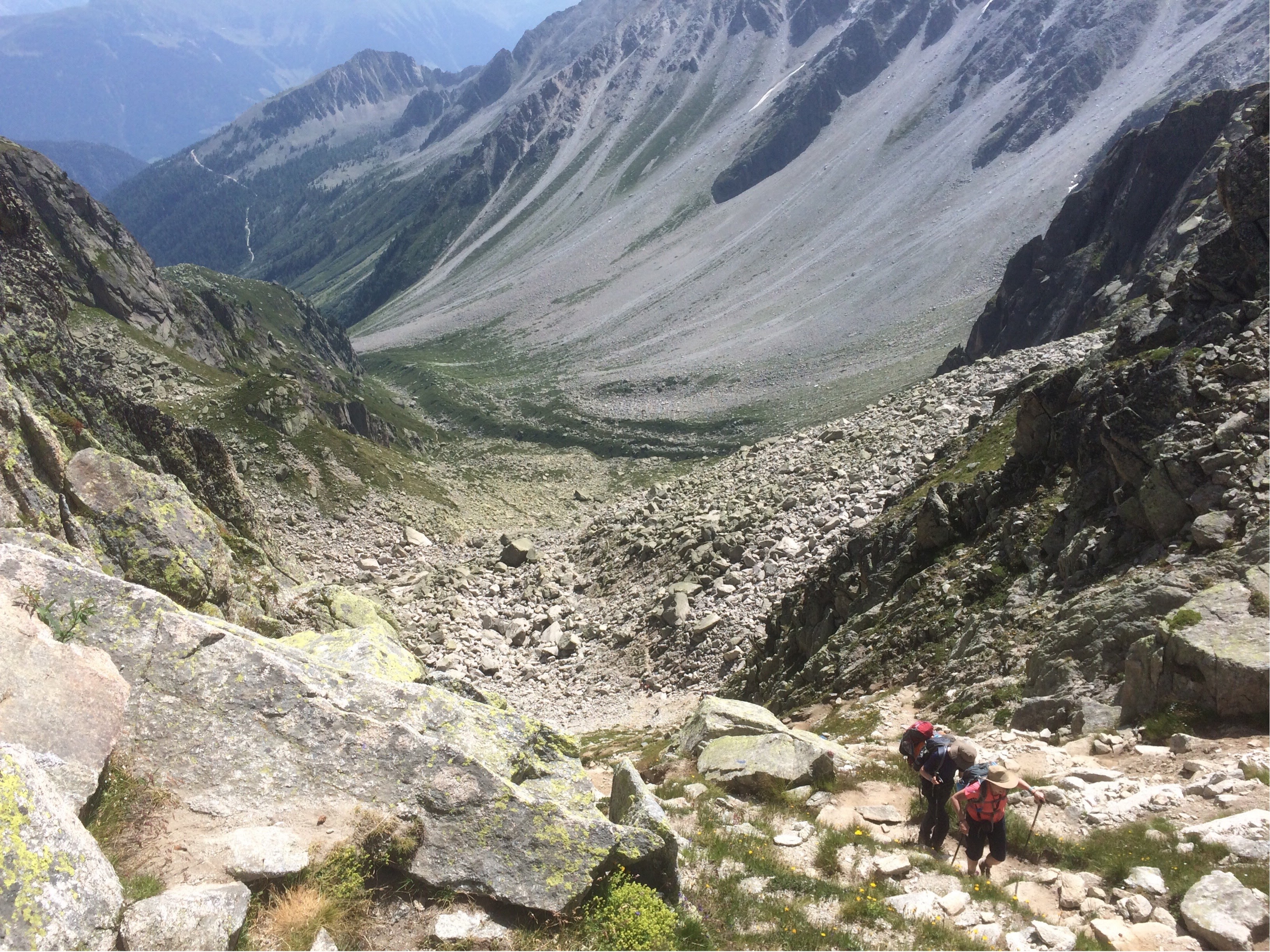 From there we could look back back down into the broad bowl of the valley we’d just climbed up, and down into the next too, with the Glacier du Trient spilling down from the mountain beside us. 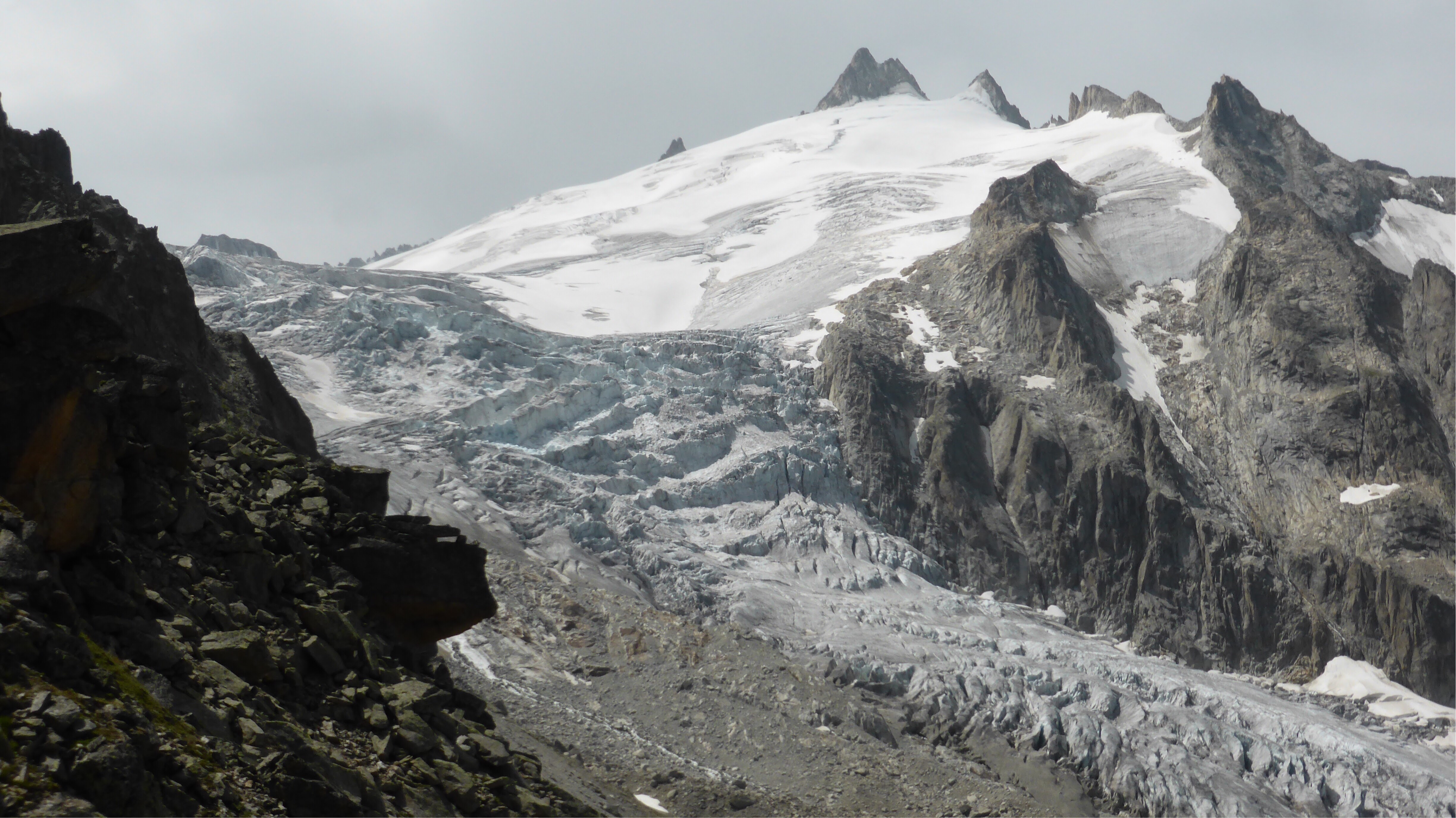 We had our lunches on the rocks, eyed by a confident blackbird which hopped about around us hoping for some er, potato salad with hard boiled egg and roast beef. 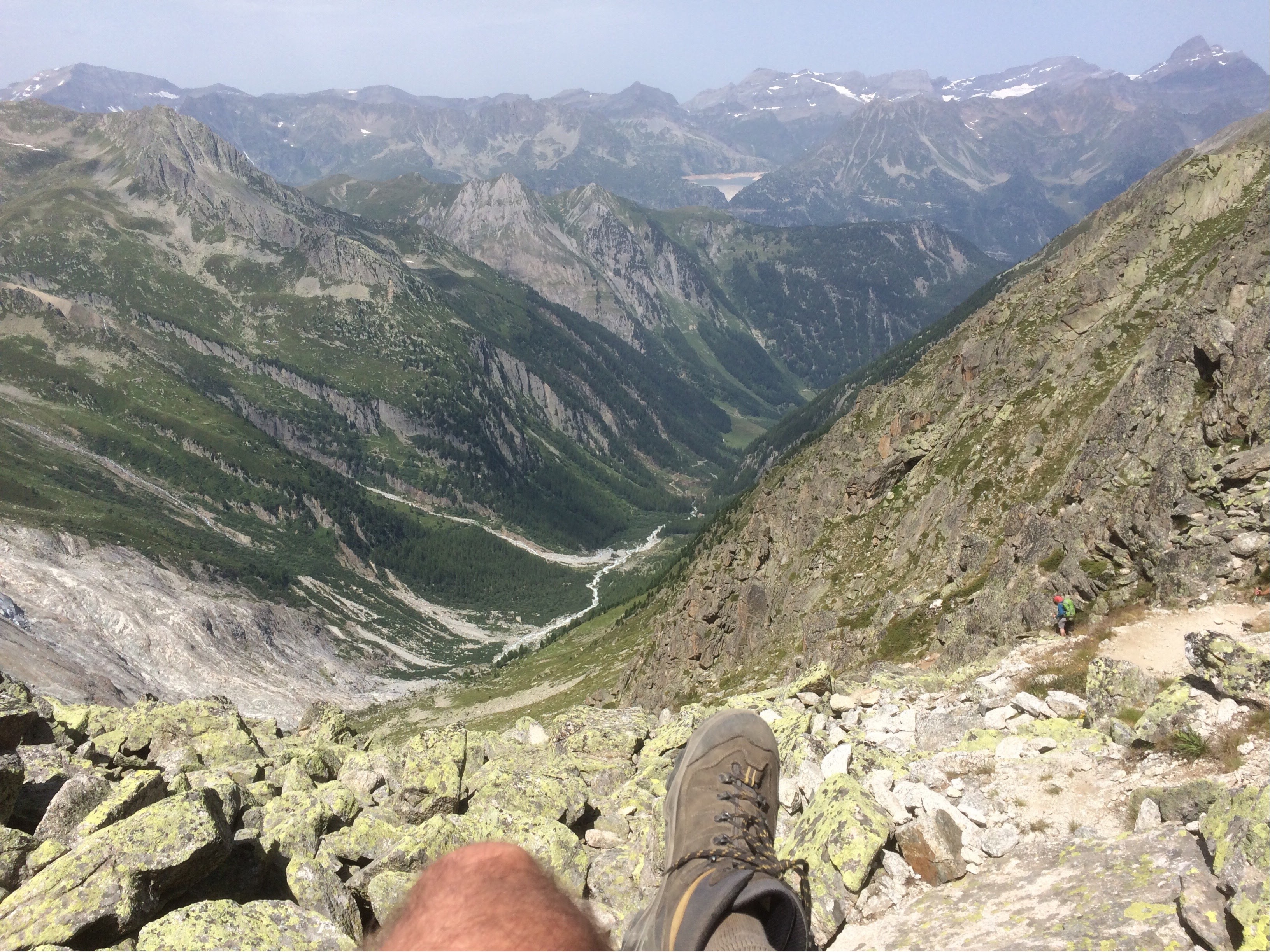 It was a grand spot, 8,900 feet up. But that meant we had a lot of down to do. And it turned out that the down was every bit as testing as the up. 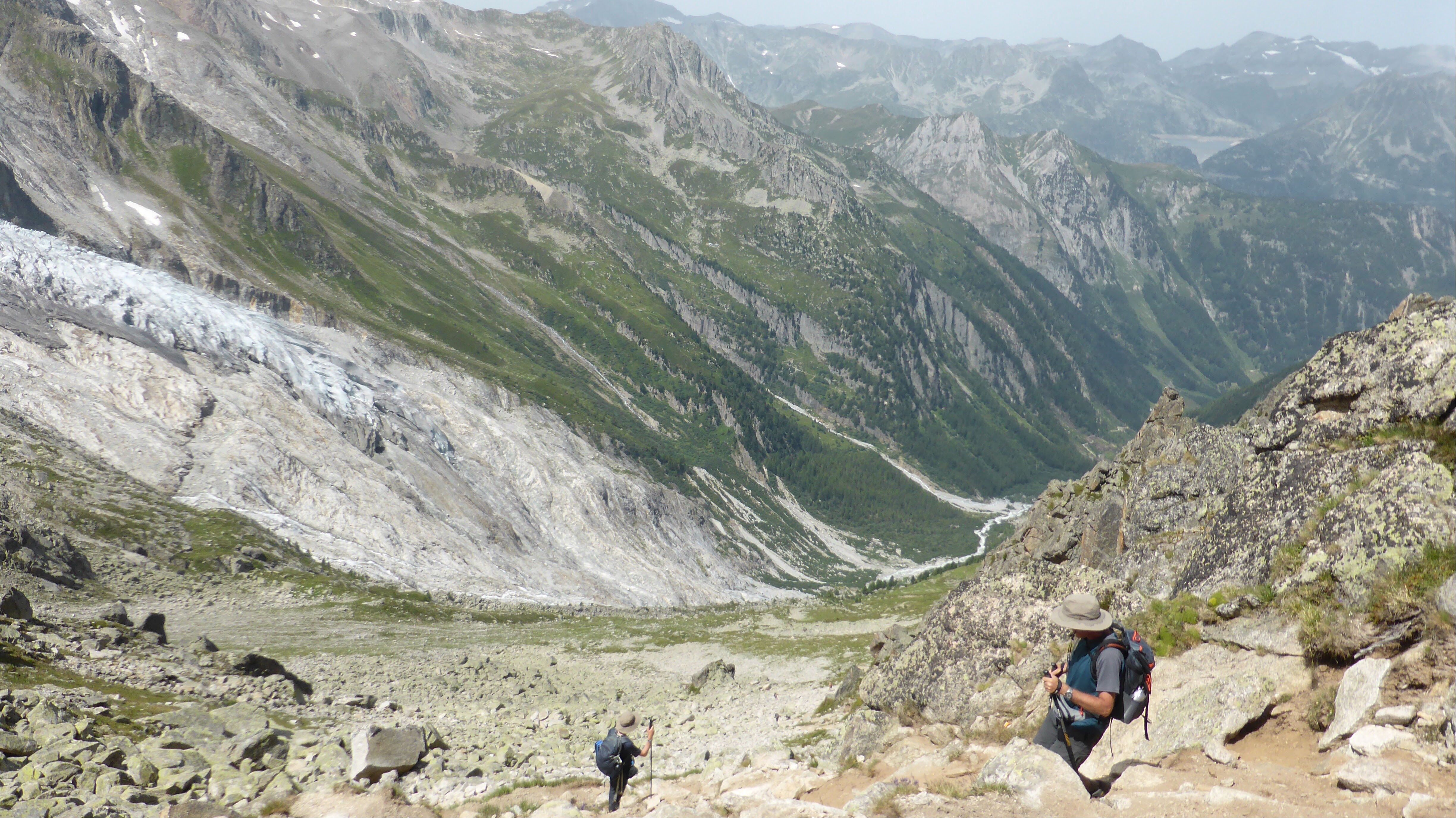 There was no boulder field and the path was clearly defined but it was covered with loose dust and very slippery. And steep! 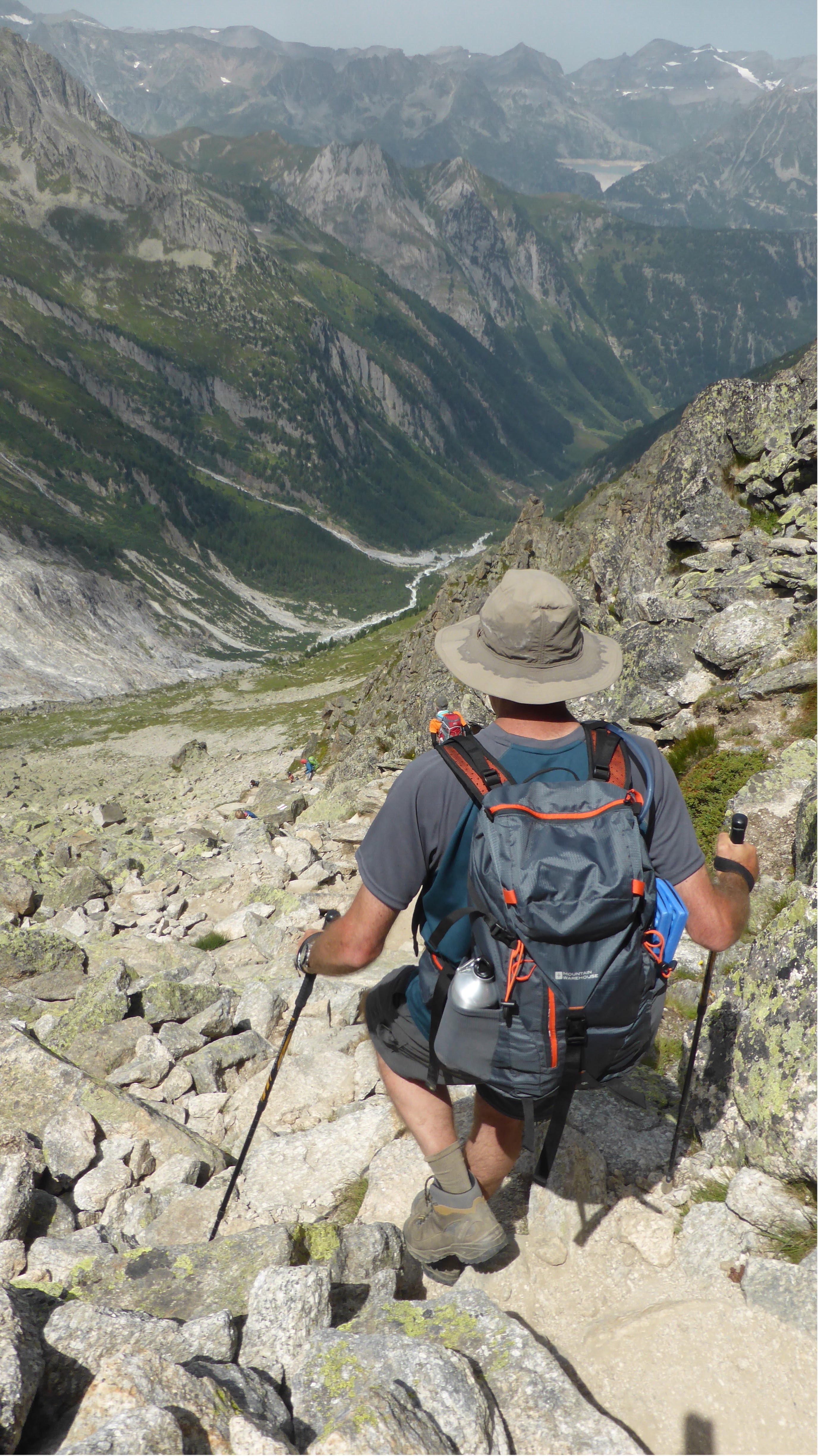 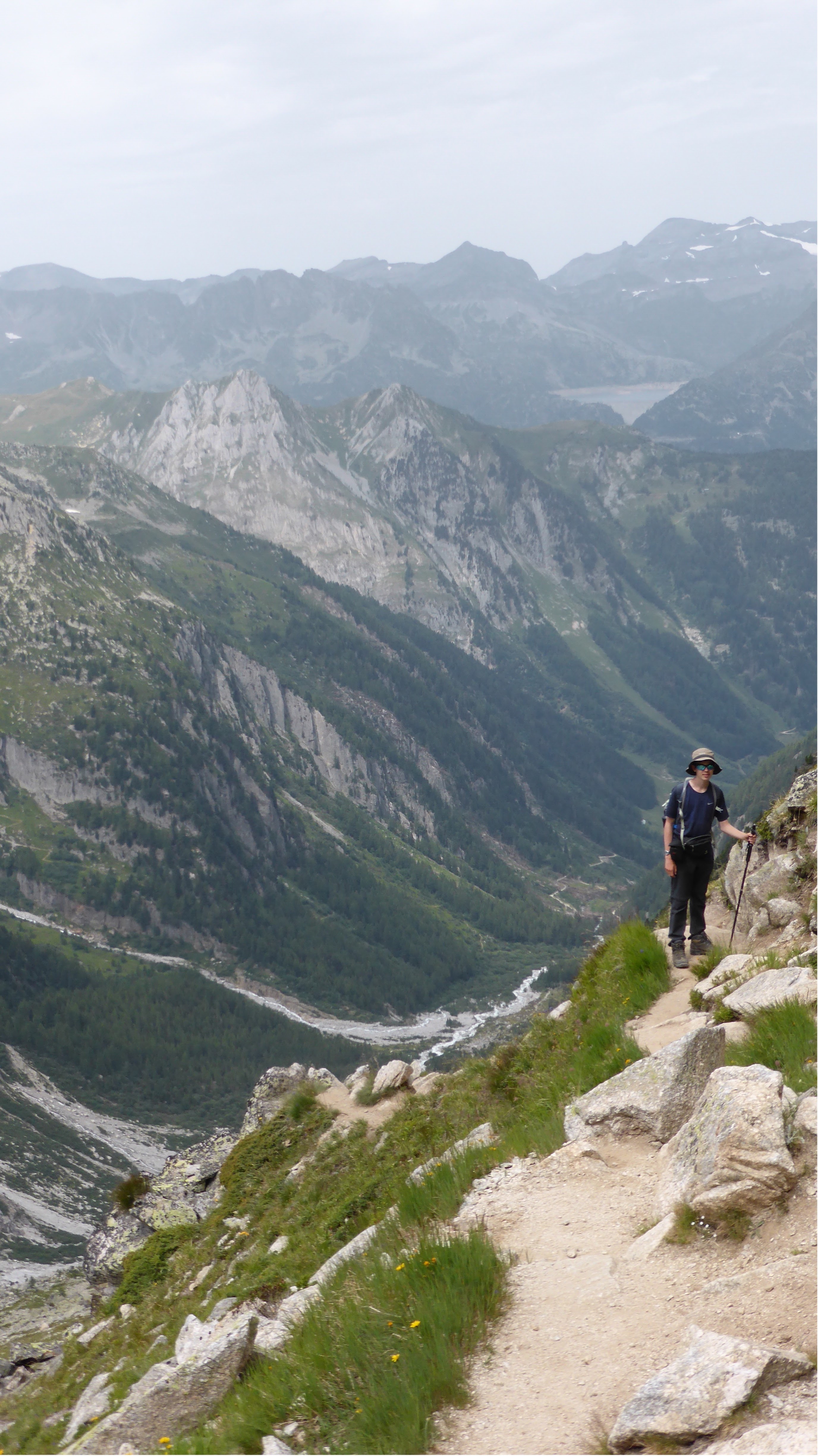 As we descended, so did the cloud which now looked grey and imposing over our lunchspot on the ridge. A couple of girls with full packs were walking up the other way and asked if we knew the weather forecast. It’s tricky because every day it has warned of thunder, but apart from the first day it’s been mostly sunny. Madeleine had laughed off the forecast when we set off. “It’s been saying thunder all week…it will be fine” but now it really did look a bit threatening up there. P went into Motherly mode, warning the girls that it looked a bit grim, but they decided to press on and up. And actually though the clouds spat a little drizzle, there was no storm.
It was still hot and the glacier meltwater roaring down the mountain looked like the perfect place to dunk your head and cool down but we never got quite close enough on the way down.
Having left the level of wildflowers and butterflies, we descended back into it. 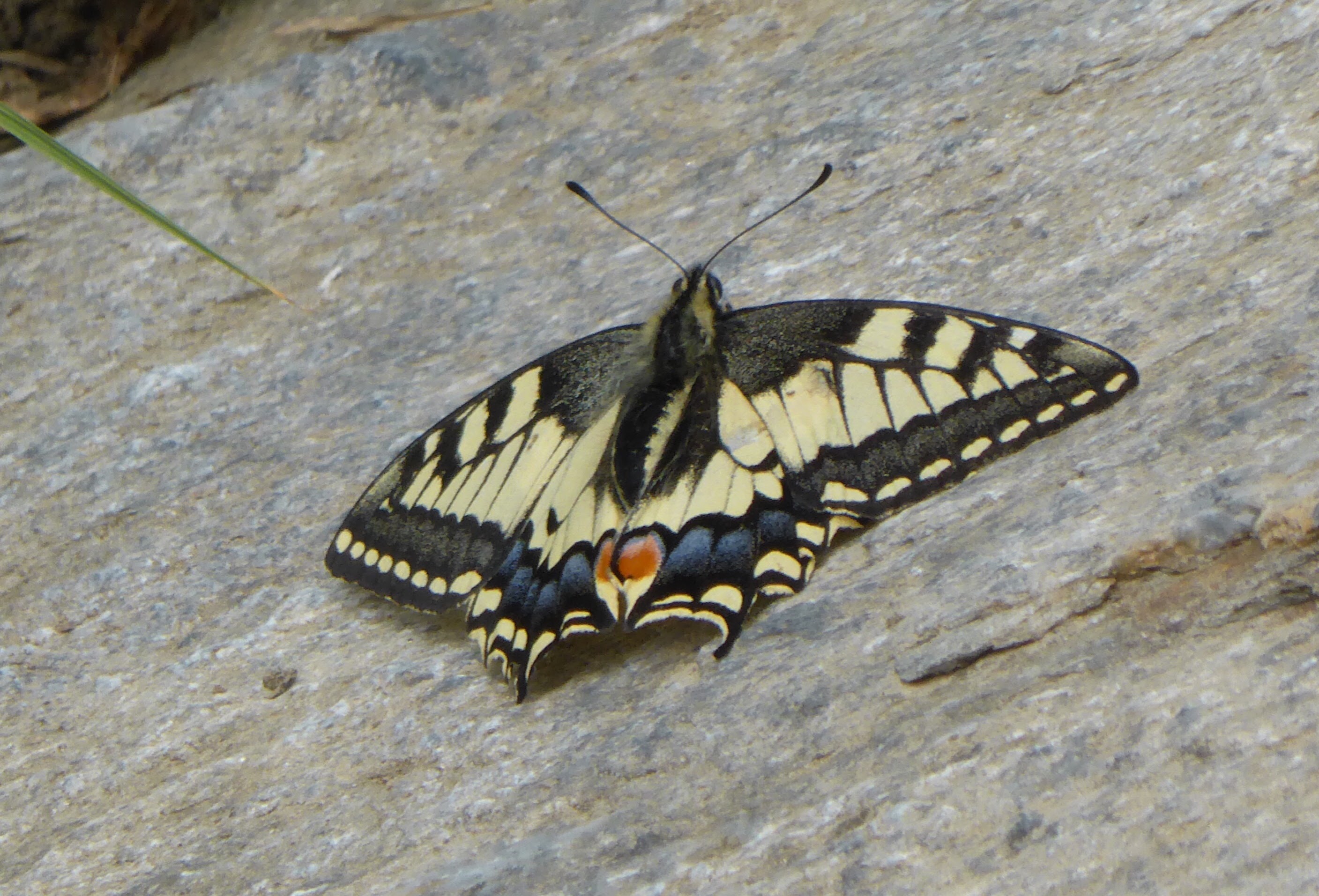 After about three hours the path levelled off and we stopped at a tiny refuge serving overpriced drinks and delicious sorbets. We had both and it was very good to sit down for a bit. It had been five hours of very steep climbing, up and down. 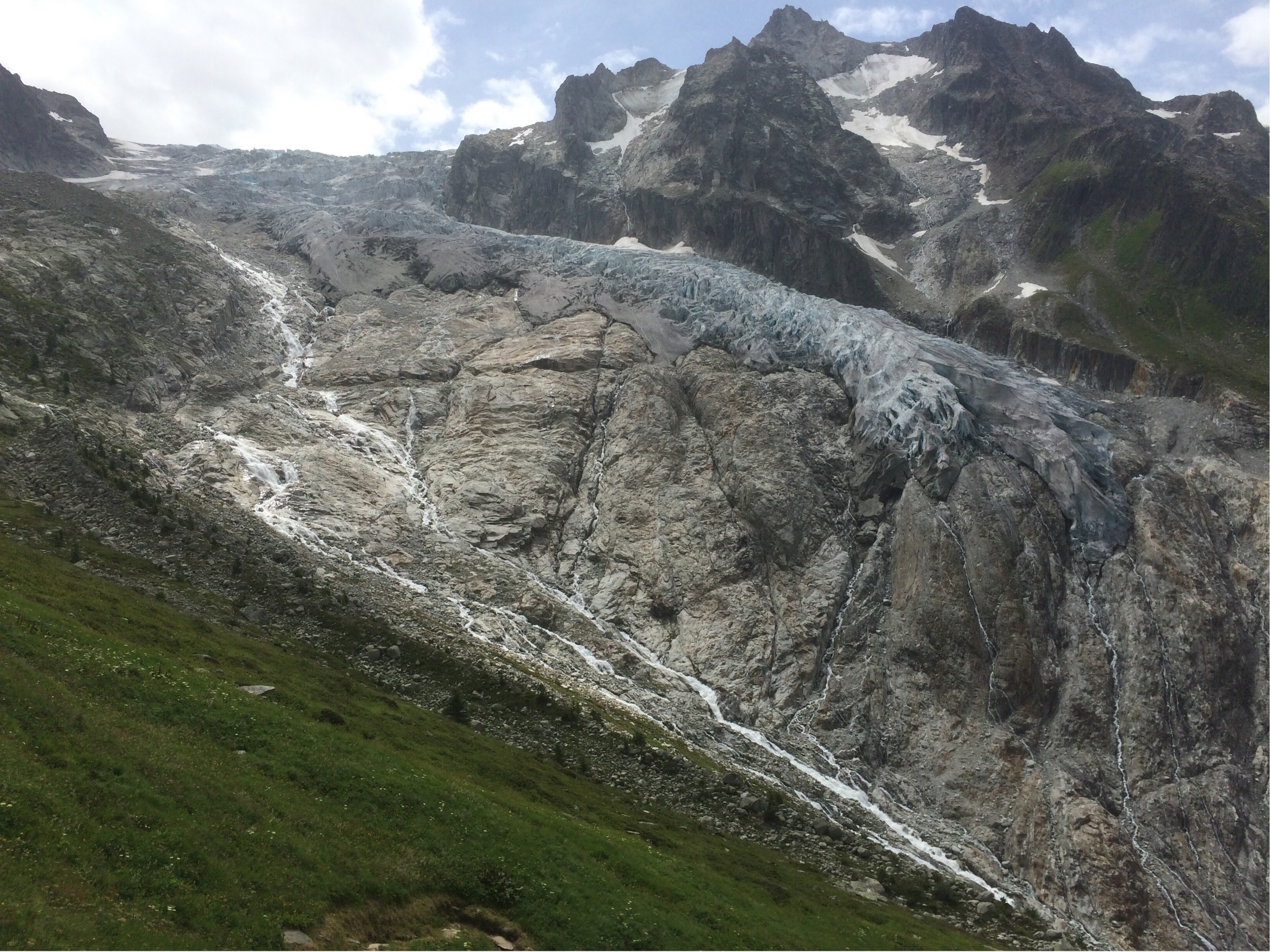 We walked on along the side of the valley, passing through an area of considerable devastation on both sides of the river. Trees lay fallen everywhere and piled in the river. We thought initially it had been the result of a landslide but there was no real rocky debris and some of the tress were snapped in half high up the trunk. I wondered whether there had been some kind of high wind. 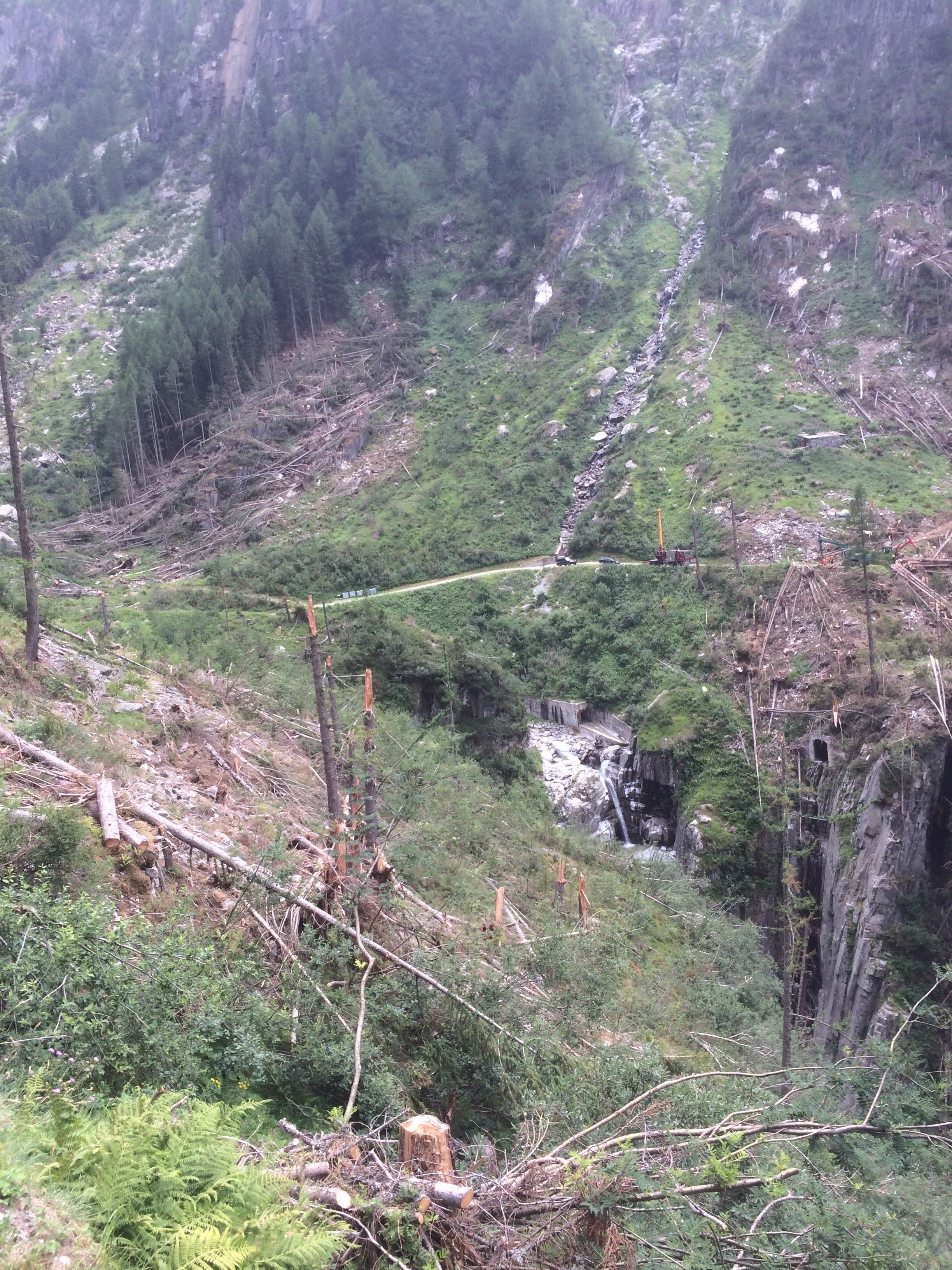 The path followed a carefully maintained irrigation channel that sometimes followed boxed-in sections to carry the flow to the next ditch. There were expensive explanation panels about the place, but our French wasn’t quite up to it. 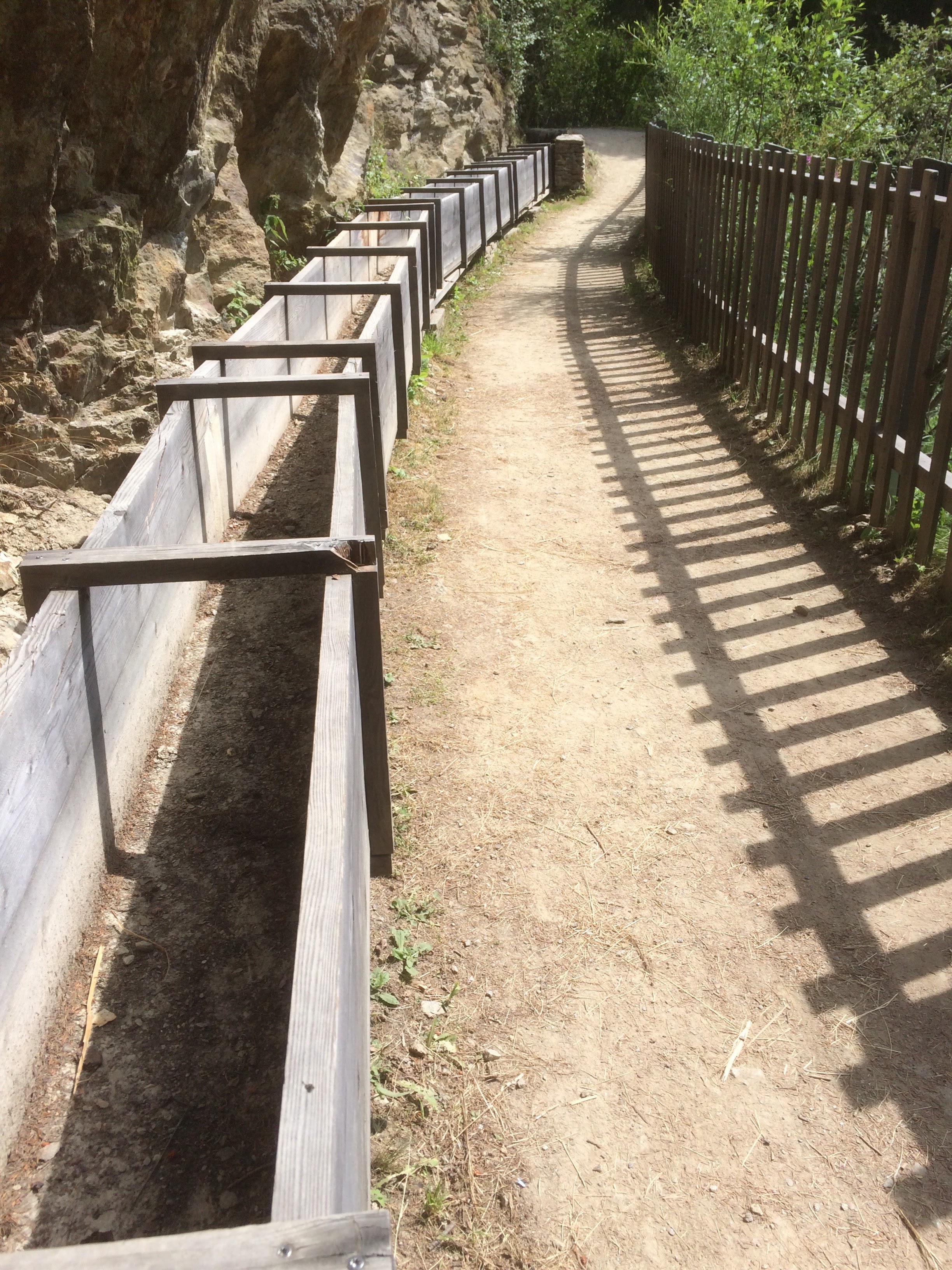 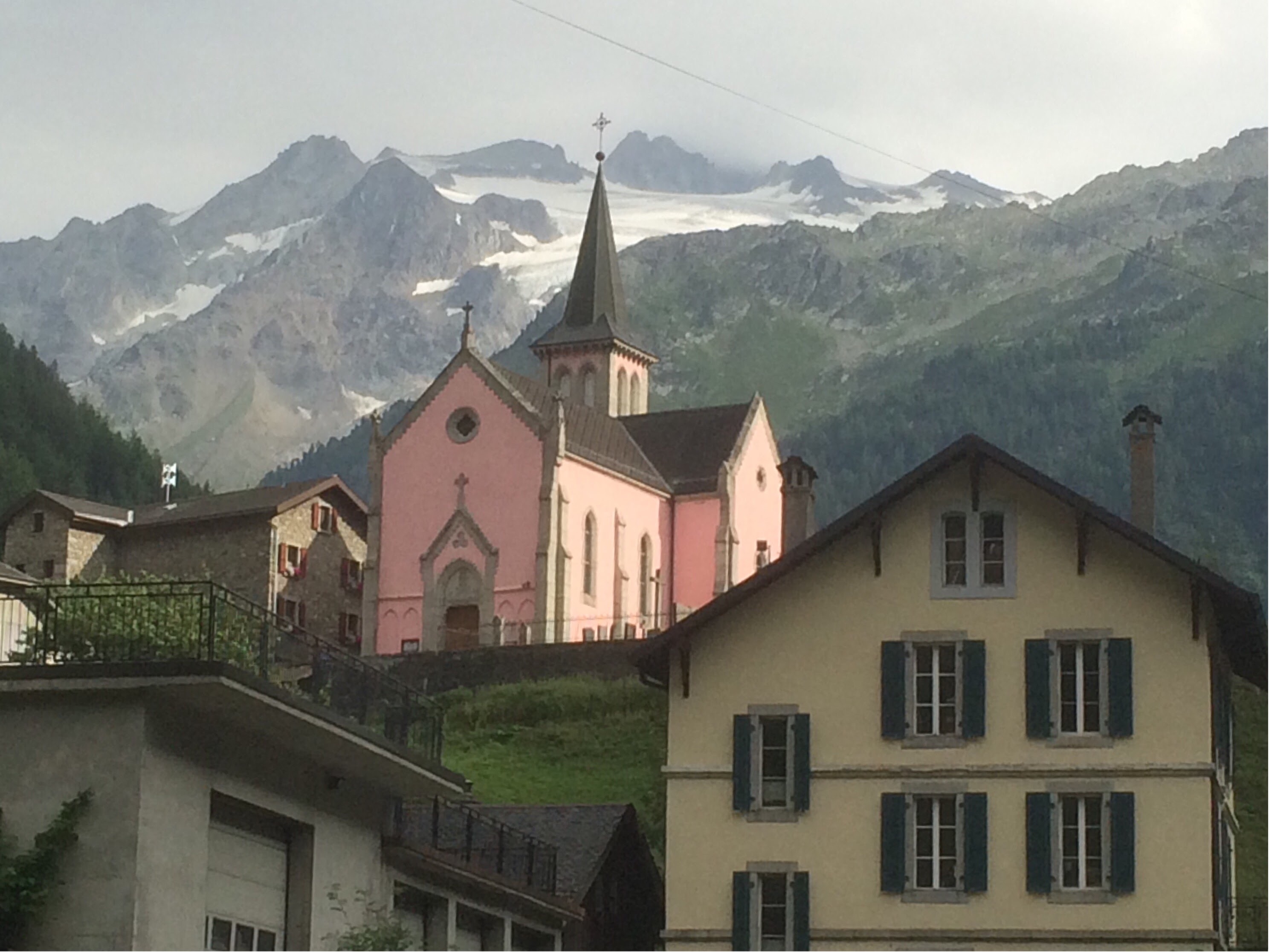 And so, after a long day, we switchbacked down the grassed-over old road into Trient. Another silent Swiss mountain village. Our “Hotel” is really a refuge with nice bathrooms but it’s all we need. We sat in the garden over panaches until the wind blew in. But it eventually blew out again too.
Supper was a communal affair and we shared our a table with two English guys called Dan; “Just call us the handsome Dans”, and a young woman from Colorado. Kaitlin was doing the Chamonix to Zermatt walk on her own with a full pack, no poles and trail shoes rather than hiking boots. She’d been travelling by herself in Europe for two months and was perfectly at ease.
It was an easy, enjoyable evening with everyone swapping experiences, but when supper is done, everyone drifts off to bed. The three of us lined up in the dark to watch “Batman Begins” with our resident movie buff. And aching knees.