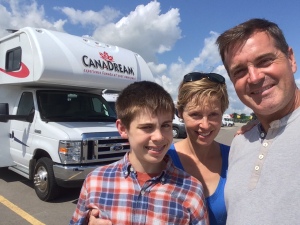 Up before six this morning and one last look out across the city. The marine layer hovers over everything this early; the tall buildings downtown stand like totems in the mist. Goodbye view. We were so lucky to stay here.

Driving across LA at this time on a Sunday morning is a breeze. This Mustang has been fun and the top has been down almost the whole time. We just had to turn the music down whenever dropping Tom off to spare him the embarrassment of getting out in front of his friends to the accompaniment of the 80s station.

Checking in with Westjet took no time at all (I have to say, it’s a great airline) and soon we were flying over the Cascade mountains in Washington State where we once drove on another holiday.

We landed in Calgary early and three immigration guys in cowboy hats smiled at us and said “welcome to Calgary” before we’d had our passport checked. At least four others welcomed us to Calgary on our way to baggage reclaim. Canada…

After a taxi ride to Canadream and an easy-going check-in experience, we were staring at our absolutely enormous RV. It’s easily the biggest we have ever had – with a slide out dining area and what feel like a proper bedroom for me and P at the back. Tom was thrilled with the huge over-cab sleeping area and was spread-eagled across it immediately. After the final briefings from the smiley Canadream lady, we set off for the mountains on smooth wide freeways where everyone does the speed limit. It could not be more different to LA. Good thing too as this RV is like driving a house.

We headed south from Calgary to get provisions at one of the superstores in Okotoks, but our sat nav didn’t want us to go there for some reason. It decided it knew a much better route to the mountains which involved taking a gravel road up and over some steep hills for several miles. Great. Just what you want in a motorhome that has the same cornering ability as a 747. Having comprehensively avoided Okotoks we abandoned that plan, stopped at the first grocery store we came to and filled the fridge. And then we were truly on our way.

Route 22 is known as the Cowboy Trail and there were ranches all along the way, though we saw neither cowboy nor horse. We also hardly saw another vehicle. At Longview it meets Route 66 into the mountains. It’s only open in the summer and it’s a grand winding road through the Kananaskis Valley beside dour grey peaks. A few miles out from the campsite in the Peter Lougheed  Provincial Park, the on and off drizzle turned into great splashy handfuls of rain that eventually thundered down so hard that it created a fine mist over the road.

We pulled into the Park and went into the shop for some bits and pieces. There was a warning about bears on the counter including information about a cyclist who had been killed and a hiker injured by one. They sold bear spray which when sprayed at a charging bear can ensure that its fur remains styled for the rest of its evening out. Or something. P, who is never backwards about this sort of thing, asked the two young people behind the counter if they would actually take it on a hike. They both nodded very seriously and said not to bother buying the bear-bells which jingle as you walk “They just don’t work”. We bought the spray.

When we found our campsite we slid out the slide-out, turned on the heating and cooked supper in a proper oven. Then we slept on comfortable beds and revelled in the absolute silence of the dark forest around us.