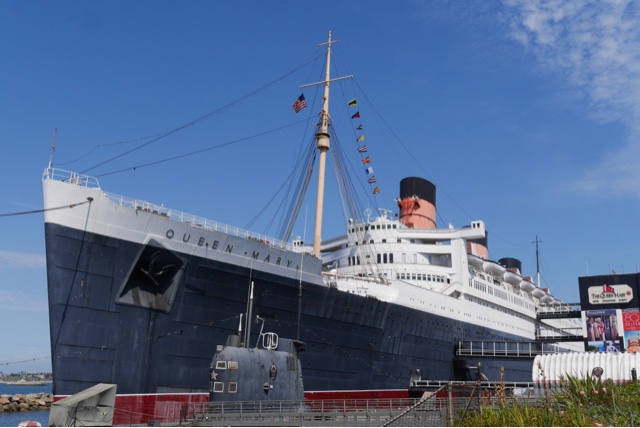 Back in October 1967 the RMS Queen Mary arrived in Southampton having completed its last transatlantic crossing from New York. Among the passengers disembarking was a two year old me. My mother recalls other passengers taking anything they could get hold of with “Queen Mary” written on, as this voyage was really the end of an era. Cheaper air travel meant that ships were no longer the transatlantic transport for the masses they had once been. The stately liner’s next journey, to Long Beach California would be its last. It is now permanently moored there as a hotel and tourist attraction.  It was on either the Queen Mary, or on the Queen Elizabeth on the outward crossing that I absorbed my earliest memory – standing on deck and being overwhelmed by the sound of the ship’s horn. Long Beach is about forty five minutes from Hollywood (sometimes…as we would discover…) so we pointed the Mustang south and hit the road. 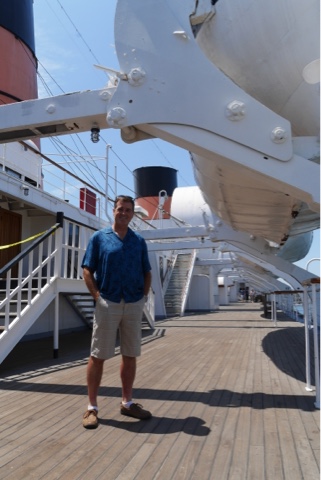 You still need tickets to get onto the Queen Mary but the friendly young guy at the booth gave me the 25% discount I had found online. He looked a bit nonplussed when I said I had been on its last sailing to the UK. I could forgive him for that though because the Queen Mary is truly from another age. Even I could scarcely believe it was possible that I had sailed on it.  It’s as if someone said you had been one of the last generation to travel by stage coach. Or use a rotary dial telephone… 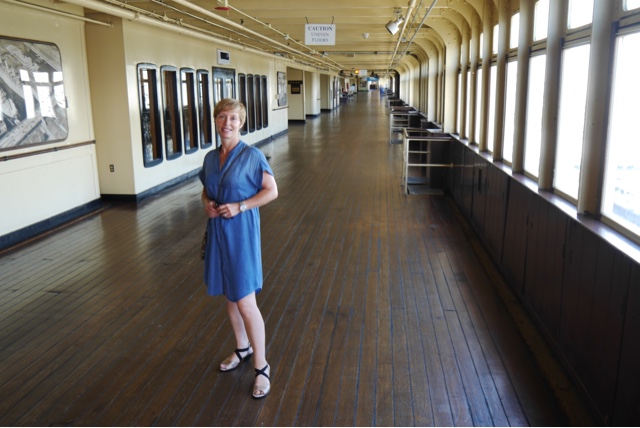 I got goose bumps going back on board. It felt oddly familiar somehow with its endless promenade deck and nineteen thirties flourishes. Here and there were photos of all the stars who’d travelled on it; Laurel and Hardy, Fred Astaire, Bob Hope. 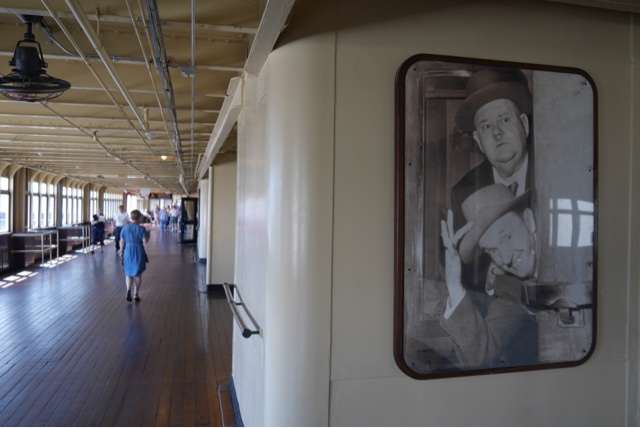 We passed the children’s playroom where I must have played once, 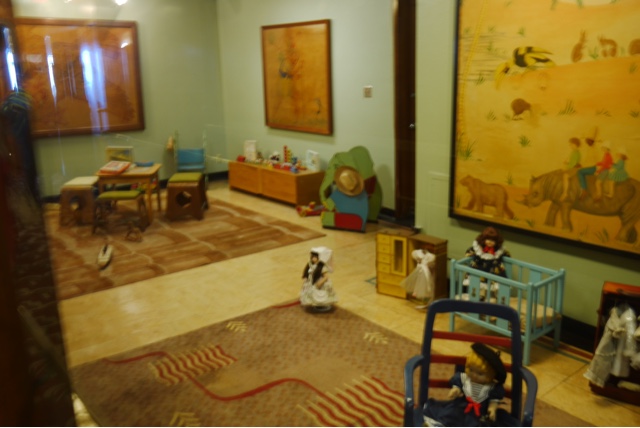 Up to the bridge more or less everything needed to drive the thing was made of brass. 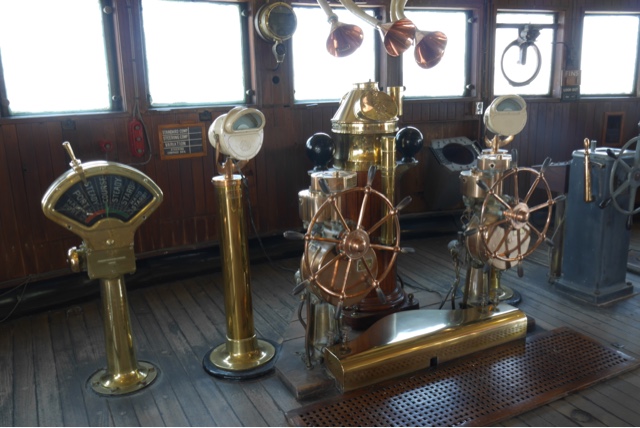 The only tour which had places left was the “Haunted Queen Mary” tour, which neither of us was particularly enthused about, but it was lead by a lugubrious guide with a deadpan delivery who was clearly a frustrated standup. “I have never seen a ghost on this tour. If I do see a ghost on this tour I will be the first to leave you behind.” He pointed out staircases where people had fallen to their deaths in rough seas, and the third class lounge where two of the cleaners will no longer go after seeing a woman vanish. 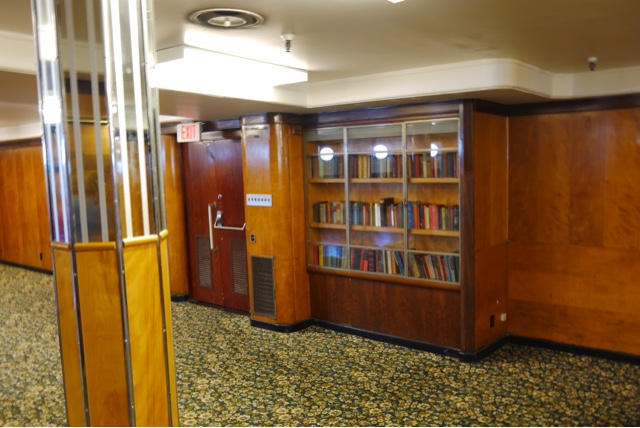 That room incidentally had two large glass-fronted bookcases which, back in the day, would have had items from the Queen Mary shop in them. Third class did not have access to the shop so items were left in the cabinets and if you wanted one, you asked a steward to go and buy it for you. The Ship’s Historian believes it was where the term “window shopping” originated. Of course, other shops have windows too but it was a nice story. P and I kept stopping to take pictures and at one stage we lost everyone. We looked up from our viewfinders and found the entire “Haunted Queen Mary” tour group had vanished… 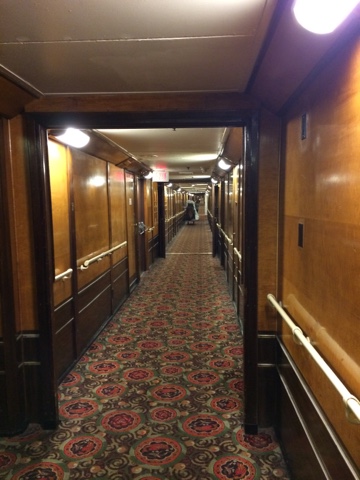 The one place that tour goes to that the others don’t is the swimming pool. 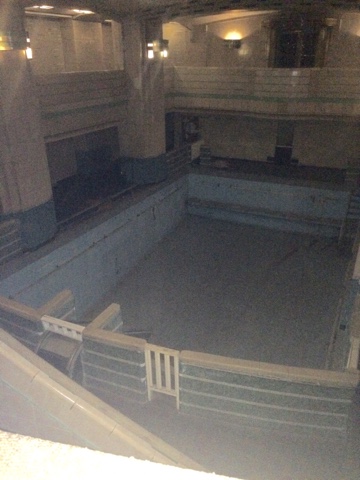 It hasn’t been restored and was dimly-lit and slightly creepy. 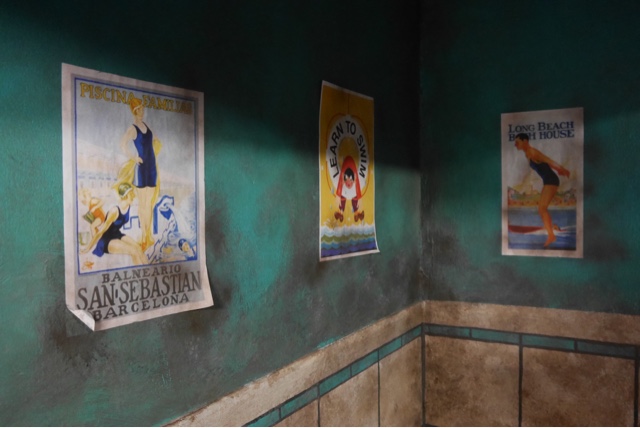 It had diving boards when the QM first sailed, but they soon realised that allowing you to jump from a height into a pool where all the water may just have slopped to the other end as you completed your second somersault and prepared for re-entry, was asking for trouble. They replaced it with a slide.
And that was the end of the tour. We rode the lifts down to see the mighty engine room and the ghostly propellor visible below the waterline. 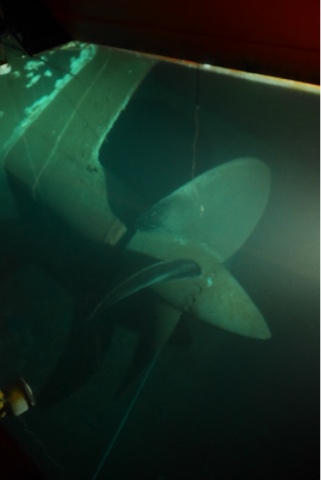 It was, from 1938 – 1952, the fastest liner across the Atlantic. The legend is that it was meant to be called the “Queen Victoria” in keeping with Cunard’s tradition of giving all its ships names which ended in “ia”. Officials approached King George V to ask permission to name the ship after “Our greatest queen…” and he said his wife Queen Mary would be delighted. That story falls under the category of “Too good to check”. 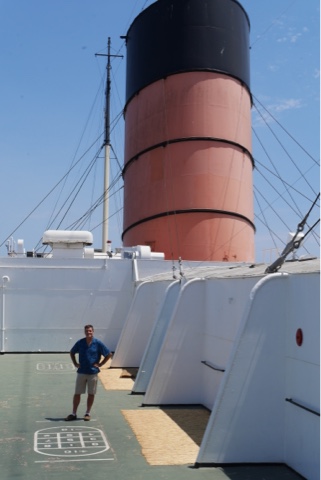 One other story. In December 1942 after conversion to a troop ship, it was carrying a record-breaking 16,000 American soldiers from New York and was hit by a freak 90 foot wave. The ship came within three degrees of capsizing and the incident inspired Paul Gallico to write “The Poseidon Adventure”. Parts of the film were shot on the QM which is still used for film shoots today. 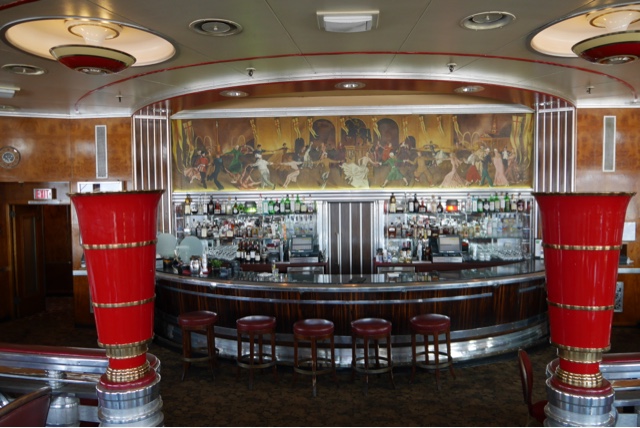 We had a lovely day on board. Some of the Queen Mary’s innate grandeur has been eroded by the many tourists in shorts and t-shirts like ourselves, slopping about on its teak decks. But the ship is a fabulous time capsule and retains a certain dignity. 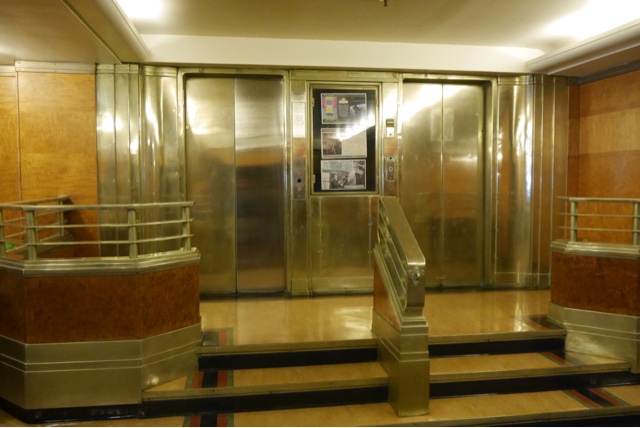 Those three angled funnels are still iconic of a time when crossing the Atlantic was a proper adventure, and not just seven hours staring at a seat-back screen. 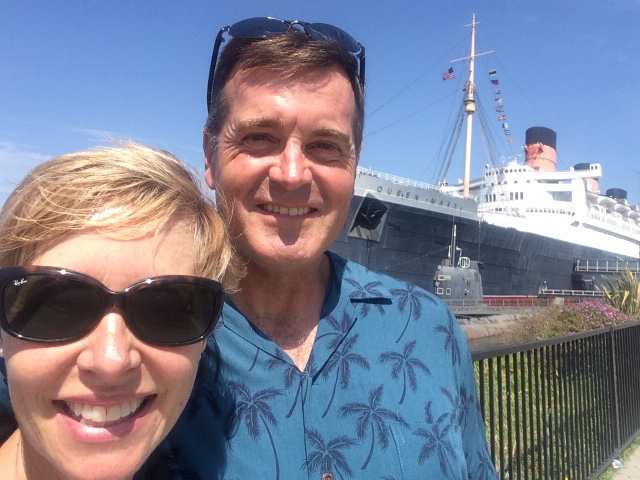 The forty-five minute journey back took an hour and a half in treacle-like traffic so Tom was beginning to wonder if we had abandoned him by the time we got to film school. 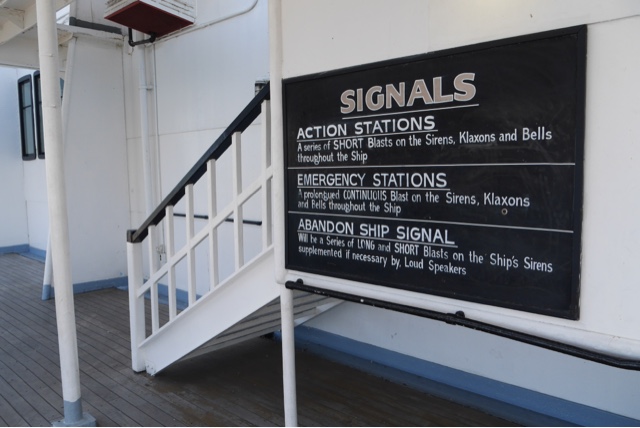