I’m on the terrace of our house, high in the Hollywood Hills. 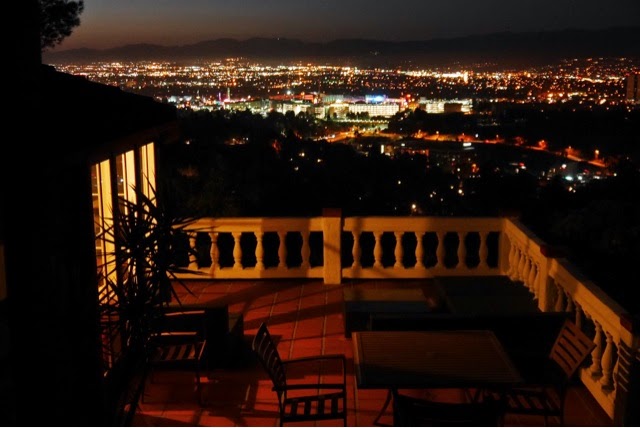 That’s a sentence which comes with a barely suppressed smile. As Tom said in the car today (looking thoughtful) “California is just so NICE” It really is. As I write, the setting sun is spreading long shadows and casting a soft yellow glow on the foliage around us.  There is a hummingbird silhouetted on a branch in front of me, and every now and then it zips off with a sharp peeping sound. Other birds are fussing in the trees and a squirrel is being busy in the upper branches. Below this house, stretching away towards the blue-green haze of the San Gabriel mountains is a wide valley which appears full of trees from up here, obscuring the sprawl of offices and film studios.  There is a hum of traffic and we can just see the cars processing ant-like along slivers of road, sunlight glinting on windows.

We have a red mustang convertible parked in the driveway and are feeling every inch like we belong here. Well, for a couple of weeks anyway. We’ve been here a week already and have had so many unexpected LA experiences from picnics at a Farmers Market to state of the art 3D theme-park rides, to hiking in canyons and a police helicopter chase which played out on the next ridge to us in the middle of the night. 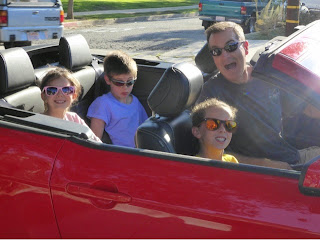 But to begin at the beginning. When we landed we stayed with Anna and Coll and their girls Sadie and Twyla. It was lovely to be in a family environment in this most hectic of giant cities. They live in South Pasadena and we went for supper at a local farmers market; wandering between stalls selling Peruvian wraps and locally-made cheeses and fresh lemonade. We each chose something for supper and sat on the grassy area used for watching movies which they project onto a screen on the side of the town museum. It felt like small-town America. The next morning while Tom and the girls climbed over the fence to use next-doors pool,  P and I walked through the old part of town to a drug store – Fair Oaks Pharmacy – which first opened its doors in 1915. It had chrome and leather stools lined up in front of a bar where you could order ice-cream floats, cherry coke and sasparilla. We ordered lemonade which was squeezed in front of us. I don’t think either of us were expecting this sort of experience in LA, but it was a good reminder that like all the best cities its simply a whole string of different neighbourhoods strung together. 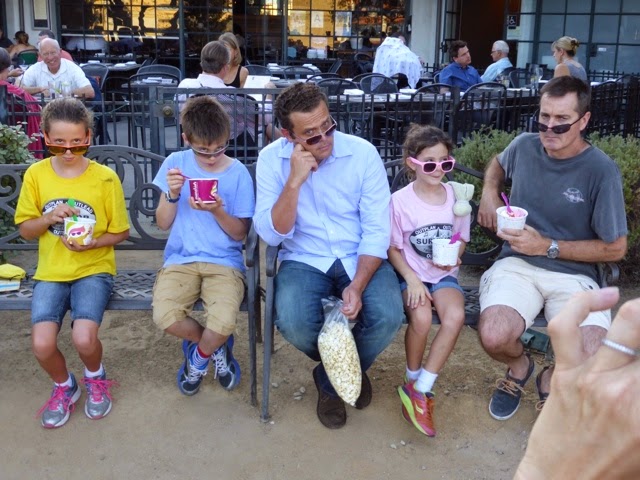 On Friday we spent the day at Universal Studios where we found out what the next generation of amusement park rides looks. The answer is, really rather good… These days its all about 3D and with the aid of special glasses, rollercoaster type carts and what must be truly enormous screens, we were transported into lands of giant robots, marauding dinosaurs and King Kong jumping onto our tour bus. It was astonishingly real and completely thrilling. We stayed for about eight hours until we could barely speak with tiredness.