Hotel Hengill Dec 30th I suppose when you come to Iceland, in the depth of winter, you should probably expect the weather to be less than balmy. The clue is in the name really. Iceland. It’s not called Hotland, or even Warmishland. Nevertheless I hadn’t expected so much snow that we can’t actually leave the hotel. To be fair neither had the Icelanders who tell us this is the most December snow they have had in twenty five years.

Flying in to Keflavik in the premature darkness of the late afternoon yesterday, the view had been serene; tiny twinkling lights each casting a pastel glow in the fresh snow. Judging from the black tyre tracks in the road there had been more than a dusting of snow but less than a dump, and it had stopped. The empty airport, brightly lit,  felt like somewhere in North Dakota or Montana in winter. Ruddy people with big boots and thick rustling coats; granules of blowing snow hissing against the window.

Quite excited to be in Iceland

Our first night was to be in Hengill, at a hotel in the middle of nowhere perhaps an hour or so from Reykjavik  where we hoped to see the Northern lights. Picking up the rental car though, I had the first inkling that maybe Iceland was not to be taken lightly. The big blond guy behind the desk whisked through the paperwork, and casually, with an air of someone who drives through remote and snowy places as a matter of course I said “So would you recommend taking route 1 to Hengill when it’s as snowy as this?”. He froze, stared at me with concern and went pale. “Well…” he began and I could see him wondering how to say “you must be nuts”. There followed a rapid conversation in Icelandic between him and his colleague, an older woman who shot several concerned glances my way. She brought up a road map on her computer screen which showed the travelling conditions on the major roads all over the country. Most said “wet snow” some said “impassable” a couple said “cleared”. Our route was on either snowy roads, or on roads not even on the screen because they were too small. Both of the desk staff were now looking at me rather severely. We bought the extra insurance, picked up the keys and bade our farewells. “Be very very careful” they said “Iceland has never had snow like this in December. Never!”

For most of the way the road was snowy but it had been ploughed and everyone drove carefully. We took the long route along the biggest roads, turning off only for the last fourteen KM on a small road which had been ploughed hours before and now had low drifts sweeping across it. It was thrilling to be out in the wilds of Iceland – Iceland! As we rose, the thermometer in the car fell to -4.5C and that was as cold as it ever got outside. Two hours after we left the airport we saw the glow of the hotel up a hillside and found the access road, swept with bigger drifts. We slithered up it and took our place alongside the only other car in the car park. 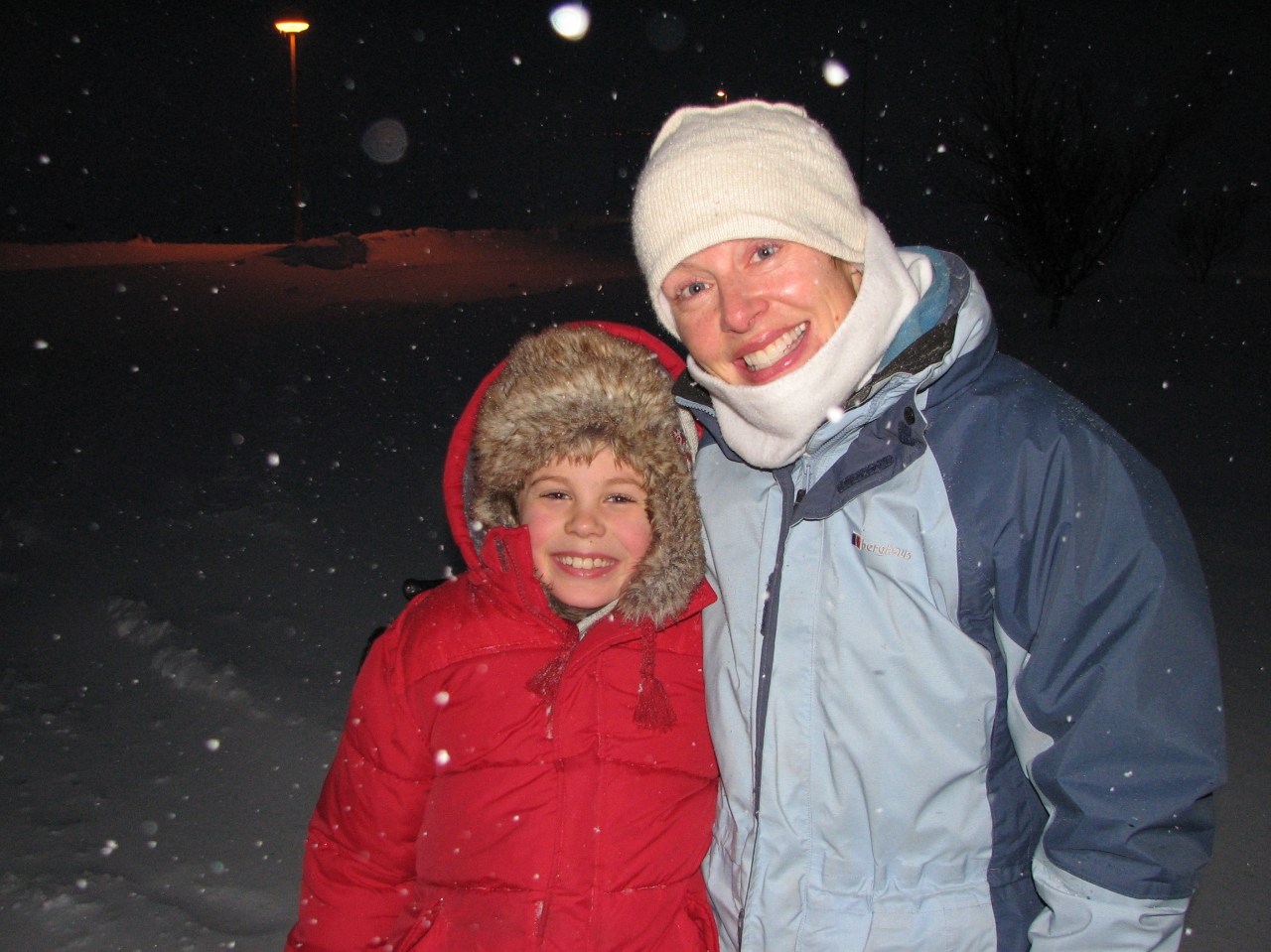 There was no one at the front desk and apart from  a single group of Japanese people having dinner the place seemed utterly deserted. Eventually a tall skinny woman in her twenties appeared and said she had not expected to see us as the direct road from Reykjavik was closed. But she got the chef to stay on and cook for us, trout for P and succulent lamb for me and Tigger. Afterwards we curled up under fat, snowy duvets and slept

We had set the alarm for this morning as it doesn’t get light here until well after ten and we didn’t want to waste the day. There were two tables of Japanese people at breakfast looking uncertainly at the smooth snowfields in the darkness outside. We ate in the gloom before pulling on long johns, snow boots, big coats and hats and gloves and feeling adventurous.

Thingvellir National Park is a short drive away in theory, but nosing back down the drive in the car it was immediately clear that quite a bit more snow had fallen overnight. Turning left to re-trace our steps it was also clear that no one had driven that way this morning. But for the markers on either side of the road it would have been impossible to see the route. The car brushed through the drifts which stretched like giant fingers across the road. We could feel the snow banks forming under the car as we drove. We were climbing back towards the pass we had crossed last night and a mile or so from the hotel we knew it would be foolish to go any further.

I put the car in reverse and drove back in our tracks until I found a stretch where the wind had blown most of the snow off the road surface, where I turned around. I just missed the turning to the hotel, taking the wrong fork n the road, and this time when I tried to turn around, we got stuck. A guy in a 4×4 on balloon tyres  rolled up and watched us struggling for a bit (those stupid English people) before coming out to see if he could hook on a tow rope, but after digging out in front of the tyres a bit, we got going again and soon we were back where we had started half an hour before. We weren’t going anywhere.

Tom was quite happy as he wanted to get not the big drifts all around us and soon we were all buried up to our waists and throwing snowballs. 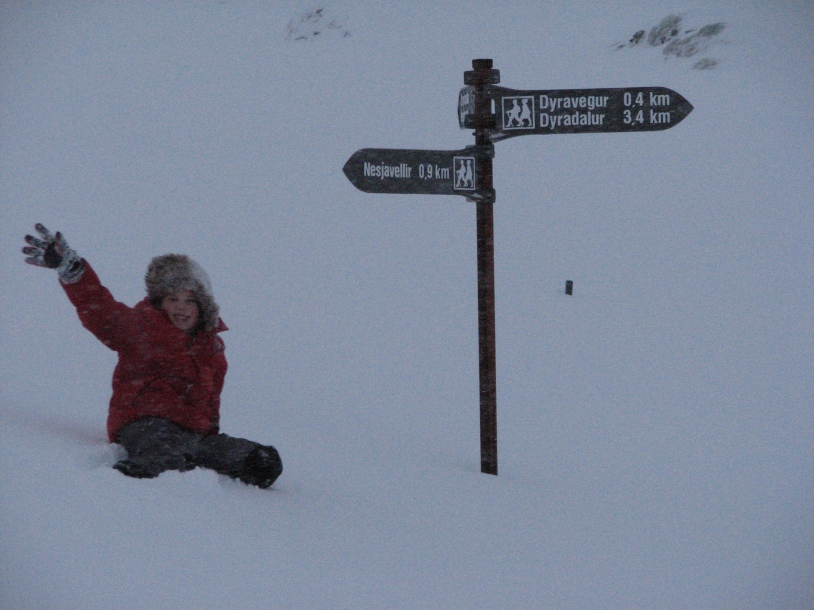 We climbed up to the half buried footpath sign a couple of hundred meters up the hill behind the hotel, panting in the dry air, our faces stinging from the blowing snow. Enough. We slithered and fell back down the hill and shook the snow off our clothes. The Japanese who had looked as if they were waiting for a lift had disappeared somehow and the hotel seemed completely empty.

We went out to the hot tub, leaping through the snow in our swimming gear and feeling the flakes build up on our heads as we soaked. 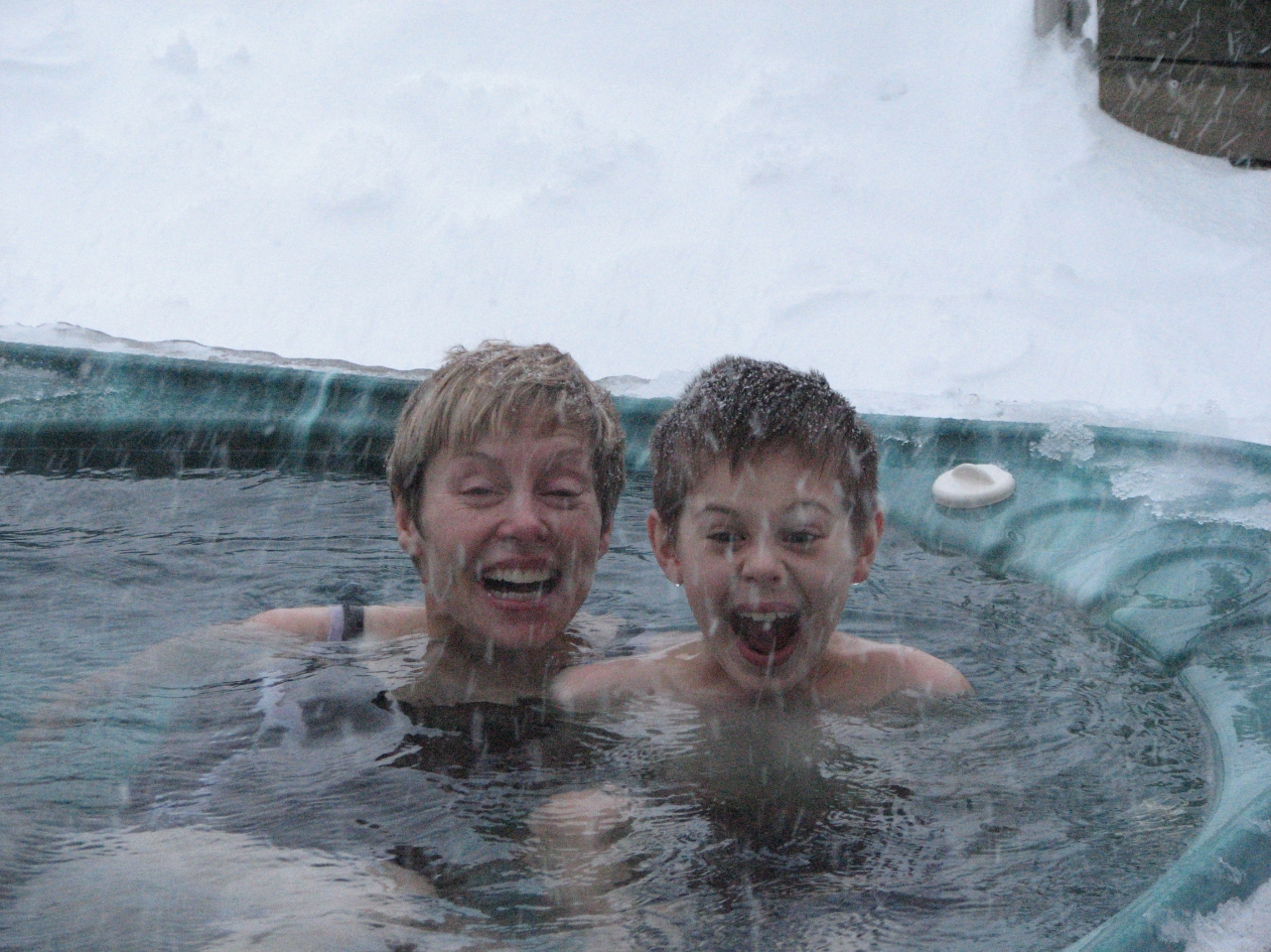 Occasionally you catch a whiff of sulphur from the geothermal power station half a mile away and the hot water reeks of it, but it’s rather exciting to think of all that heat coming directly from deep below the earth.  So here we are, at Hotel Hengill, with absolutely no way of getting out. They think the road may be ploughed tomorrow. Maybe. The hotel feels empty in a Marie Celeste knd of way. The lights are on and the breakfast buffet is still out at noon, but there are no people. The two staff have retreated somewhere. I went down to the end of our corridor where there is a small area to sit and discovered that someone had left the outside door open and a snow drift was gently making its way inside as the wind howled through. I cleared the snow but couldn’t quite close the door as the hinge was packed tight with ice. I had bought some Cuppa Soups from Tesco on impulse as we walked to the tube yesterday (yesterday!) and they are now looking like lunch. We will miss the wonderful lobster place on the south coast we had booked for tonight. This afternoon will involve books, a movie (hurray for the iPad) and  perhaps another session in the hot tub and we will have to read about the natural wonders all around us which are blanketed in snow and cloud.