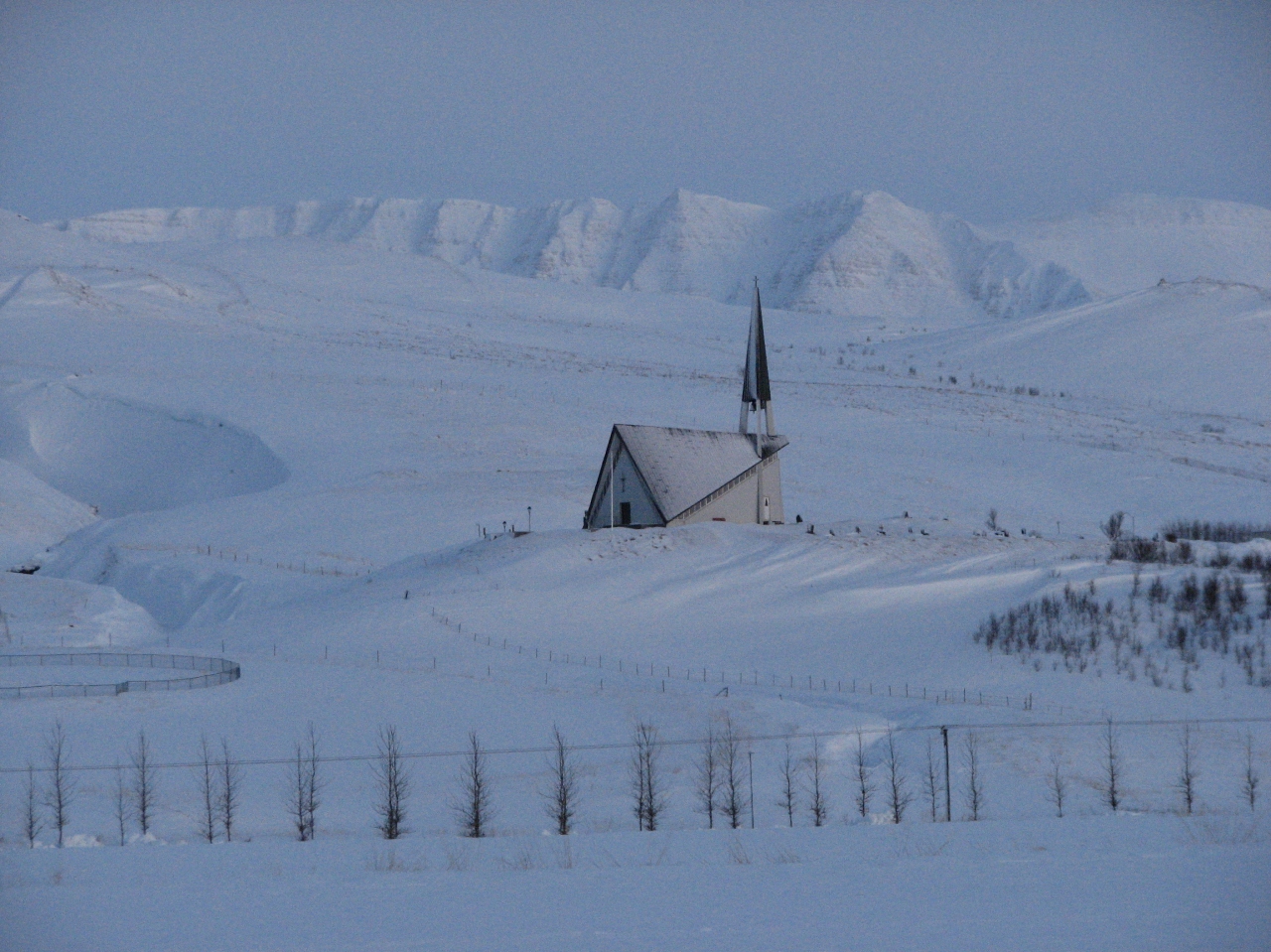 We felt somewhat thwarted by the weather yesterday, having been forced to scuttle back to Reykjavik without really seeing anything of the countryside. Actually “countryside” doesn’t seem to be a word that you associate with Iceland. It suggests rural idyll with hedgerows and cows chewing the cud and butterflies. Iceland isnt really like that – at the moment anyway. I think a better word for Iceland’s interior is “terrain”. But what terrain it is. We emerged from the city into a perfectly iced landscape; vast open stretches of white rolling off to blunt-faced cliffs topped with a perfectly squared-off shelves of snow. The sky was duck-egg blue, streaked with misty clouds tinged rose from the sunrise. It was a breathtaking drive through a silent frozen world. The road had been ploughed but there had been a couple of inches of snow overnight making it all but invisible. We swished along over the smooth surface stopping occasionally to stand in the chill and take it all in. It couldn’t have been more beautiful. 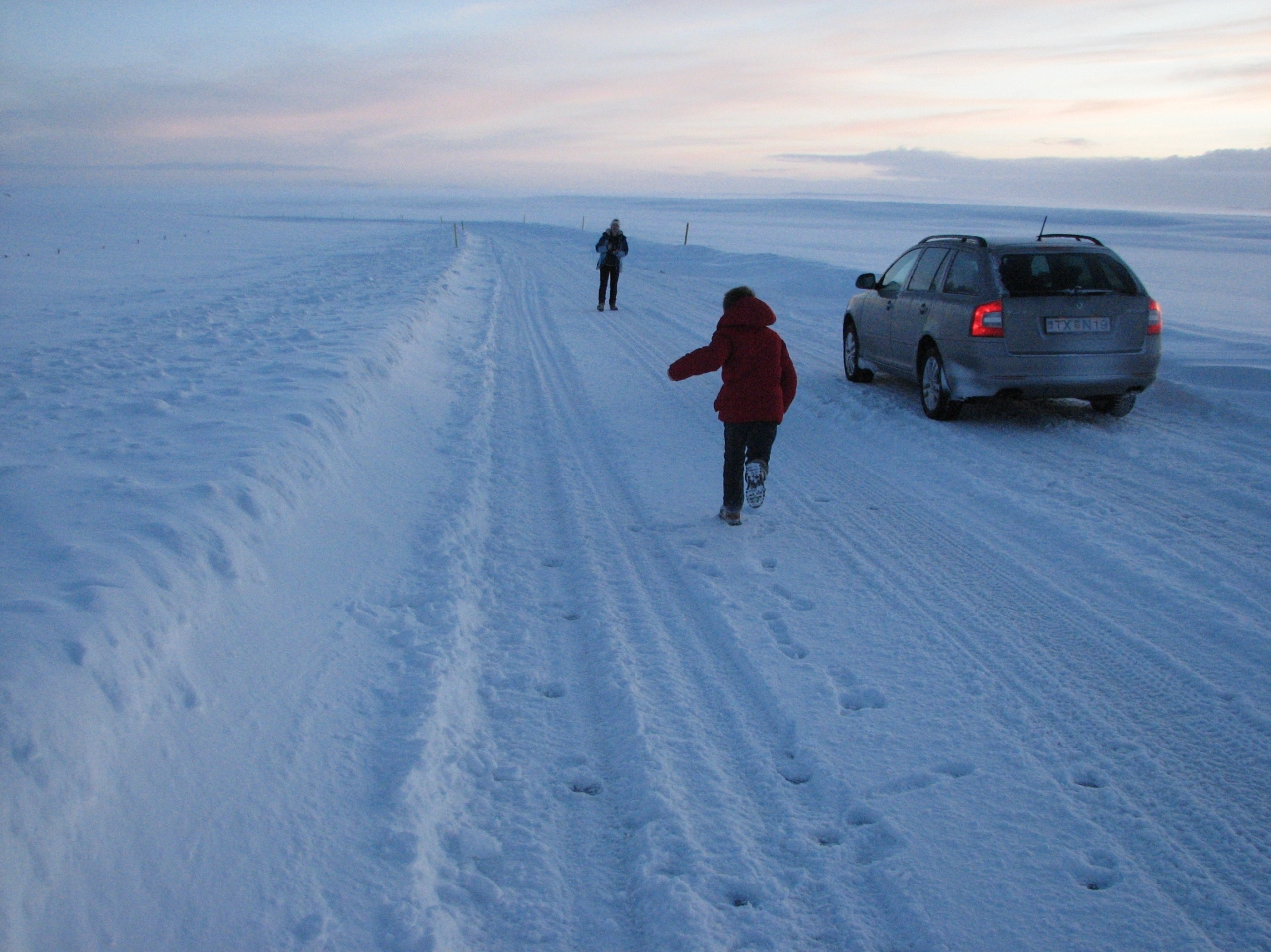 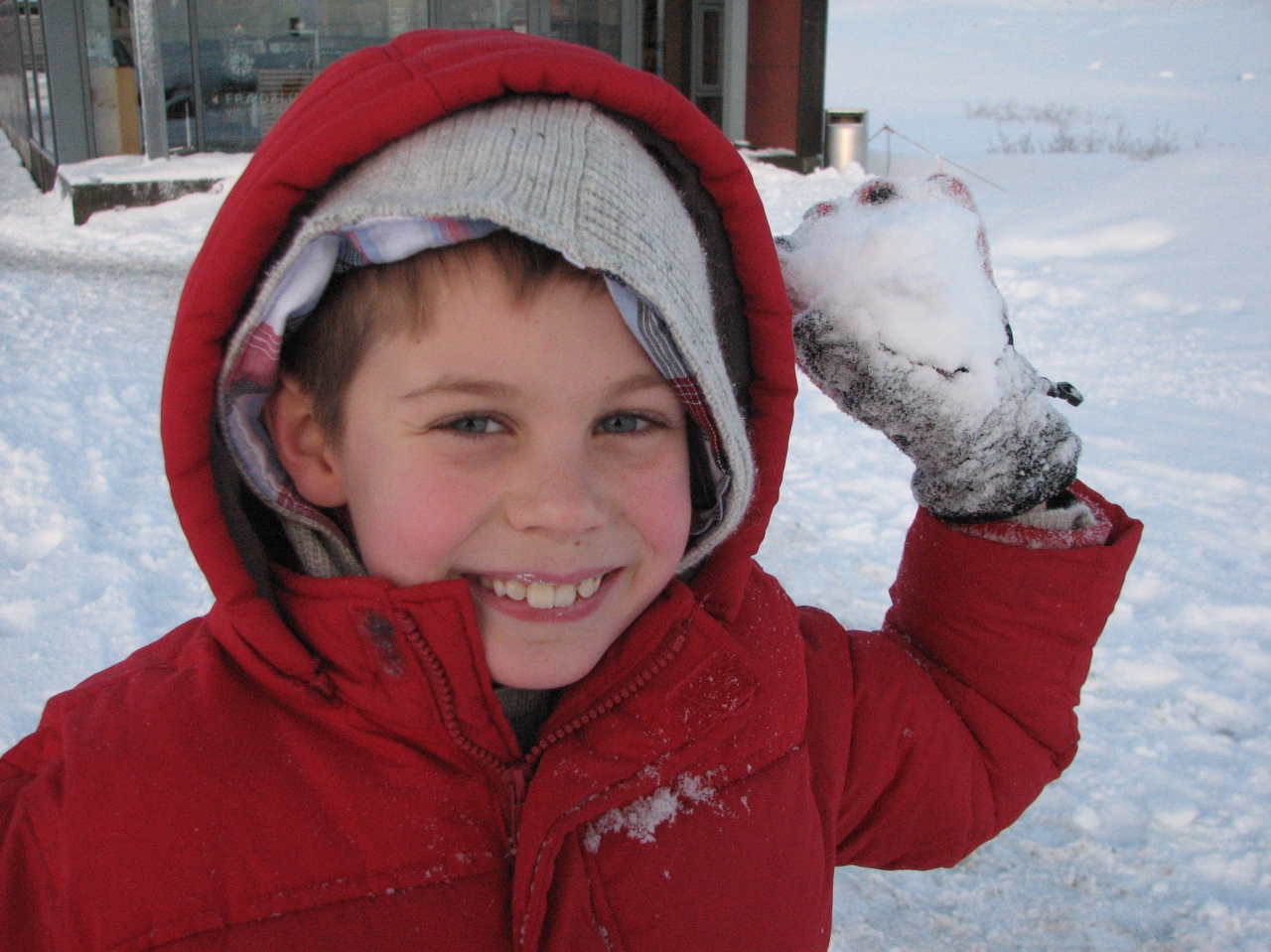 We stopped at Thingvellir National Park and found the famous chasm between the tectonic plates which opened up relatively recently. 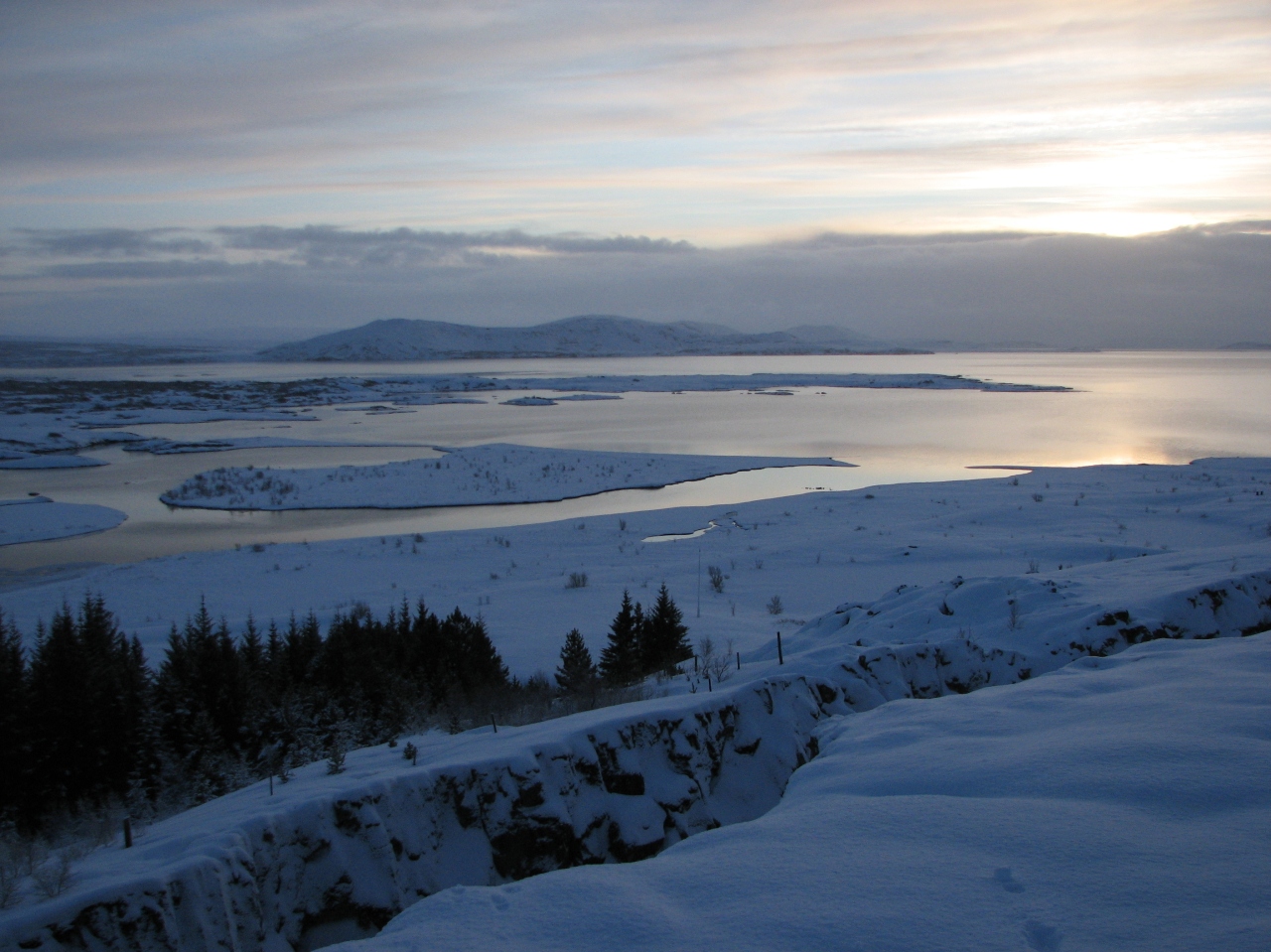 Normally you can walk through it but the snow was too deep, so we had to admire the view instead. Thingvellir was the site of the first Icelandic parliament – a meeting place really, where for a few weeks a year people would gather and laws would be made. One man would recite all the Icelandic laws from memory. 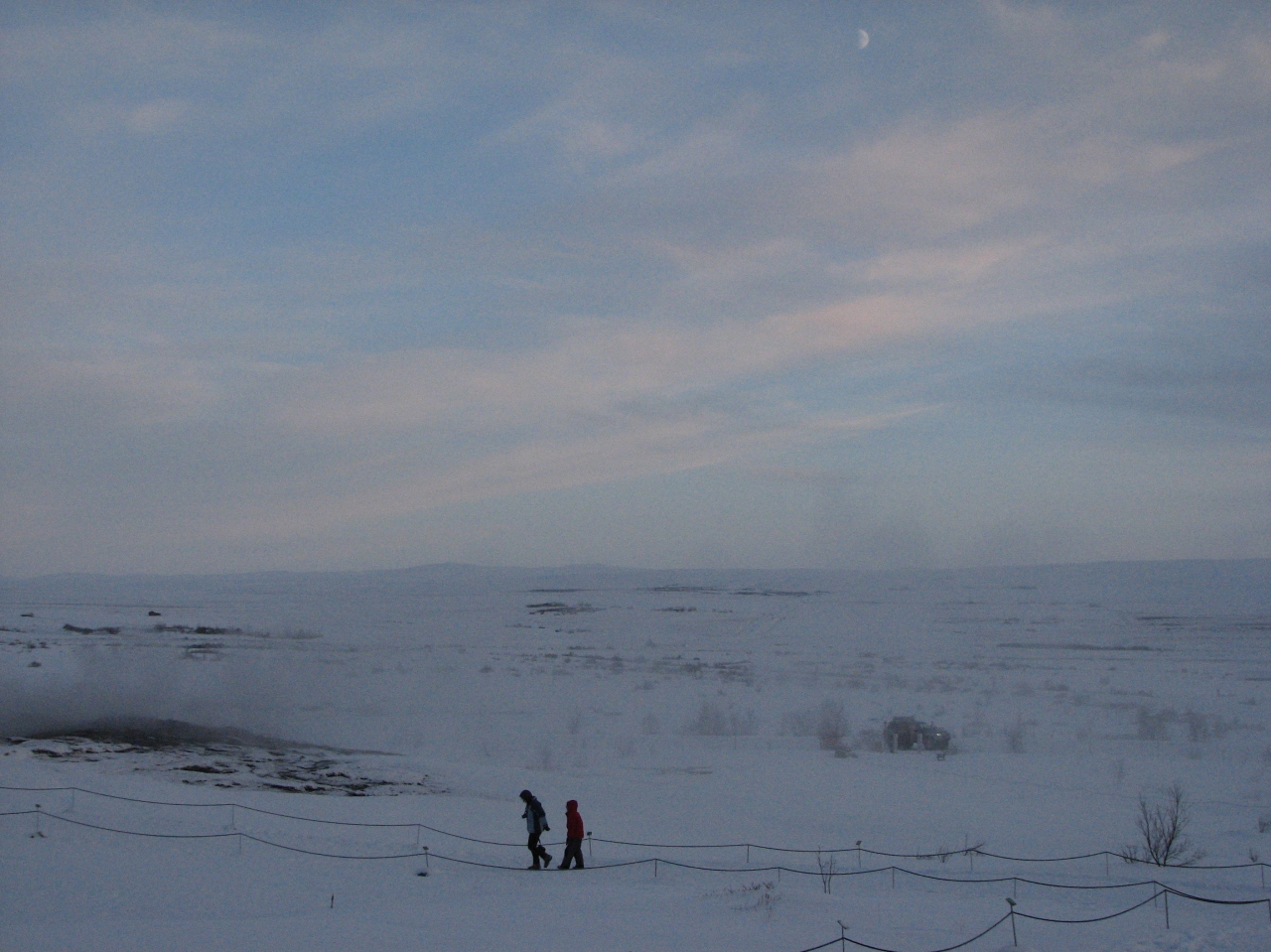 We could have spent more time there, but with only a few more hours of daylight left we pushed on to Geysir, an hour or so further.

The first clue that we were getting close to Geysir was the sudden mist which smothered the road. Then we noticed that the ditch beside us was steaming and soon, that the whole field next to us seemed to be smouldering, We parked and went to look. All around us little vents were steaming away and boiling water was dribbling along beside the path. 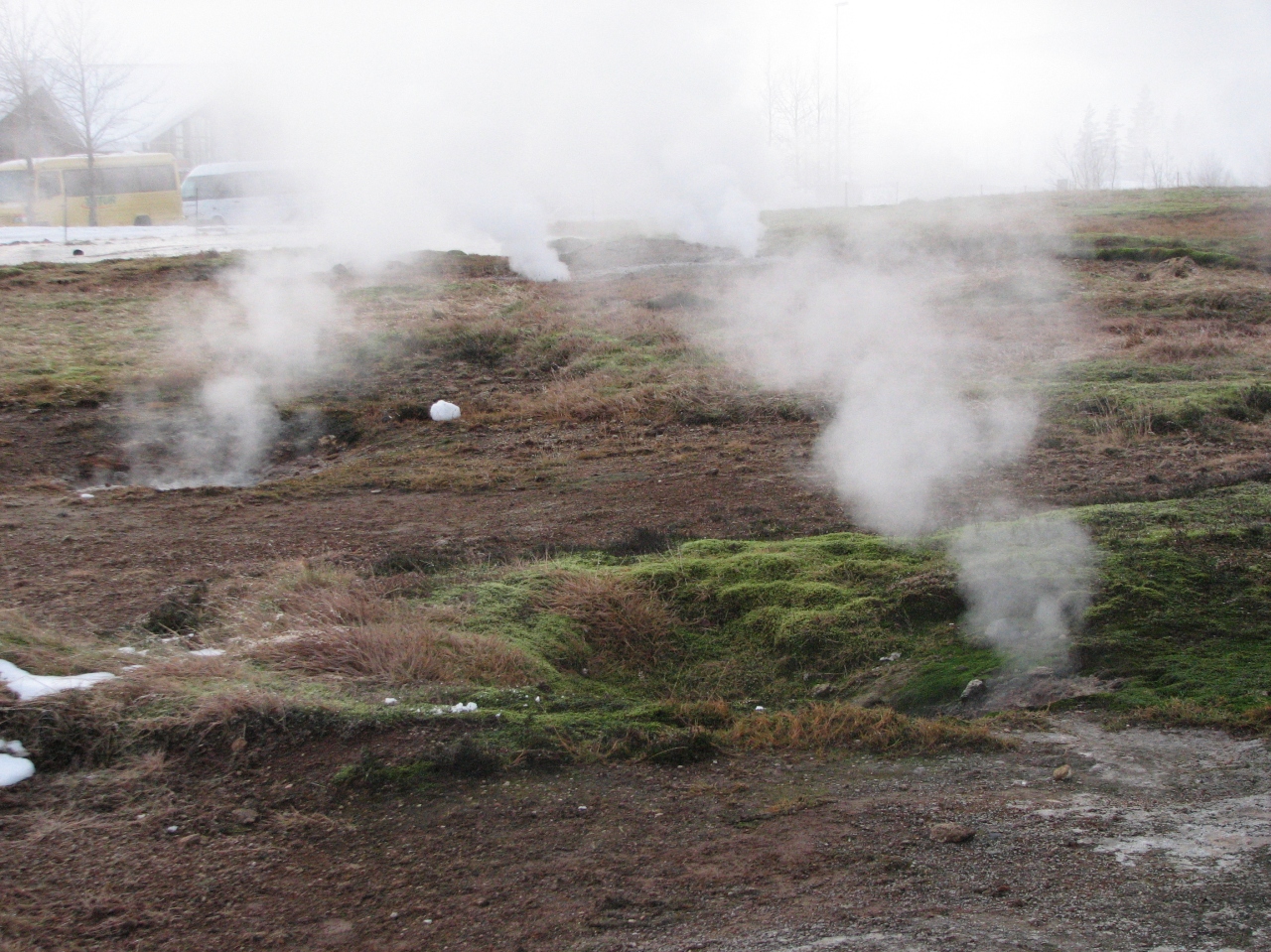 Geysir gave its name to the geyser of course and we walked within a few feet of one which erupts every few minutes. We saw it go several times, the boiling pool sucking in and out a few times before suddenly releasing a huge bubble of steam.. 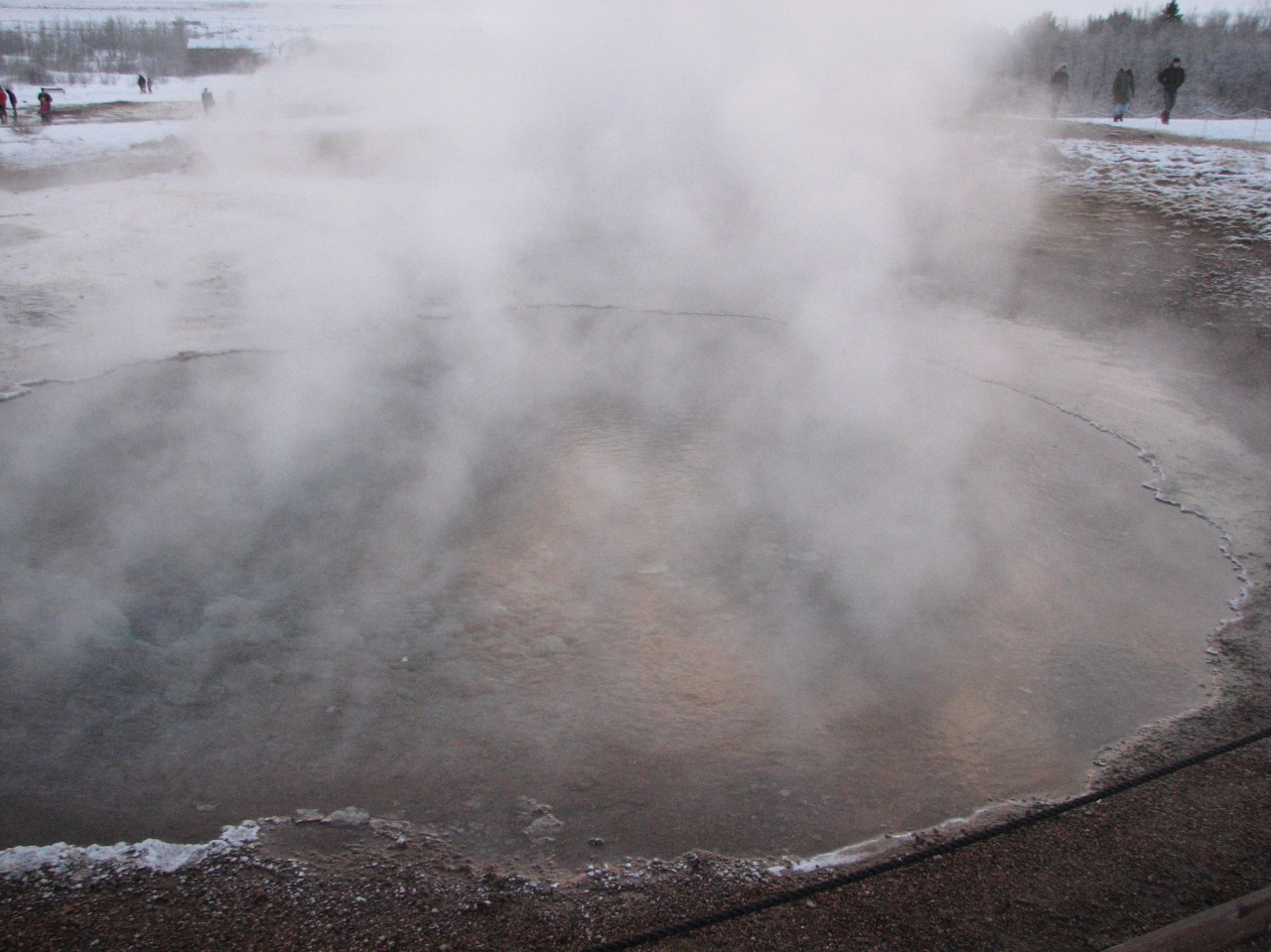 Small birds, with fluffy brown breasts peeped and flitted around us through the steam. They are about the only wildlife we have seen. Thor, who took us to his community bonfire last night told us that a couple of polar bears have swum over from Greenland in the past few years only to be shot. Iceland does not really want enormous hungry bears on the loose. They would certainly frighten the horses, of which we have seen dozens; little Thelwell creatures with fat necks, bowed backs and shaggy mains.

After soup and hot chocolate we hit the road again, and had it more or less to ourselves on the way back. Occasionally we passed a clapboard farmhouse with a porchlight glowing as dusk flattened out the landscape. After a couple of hours we were back in Reykjavik’s slushy streets, the sky a bruise of blue. That was a New Year’s Day we won’t forget. 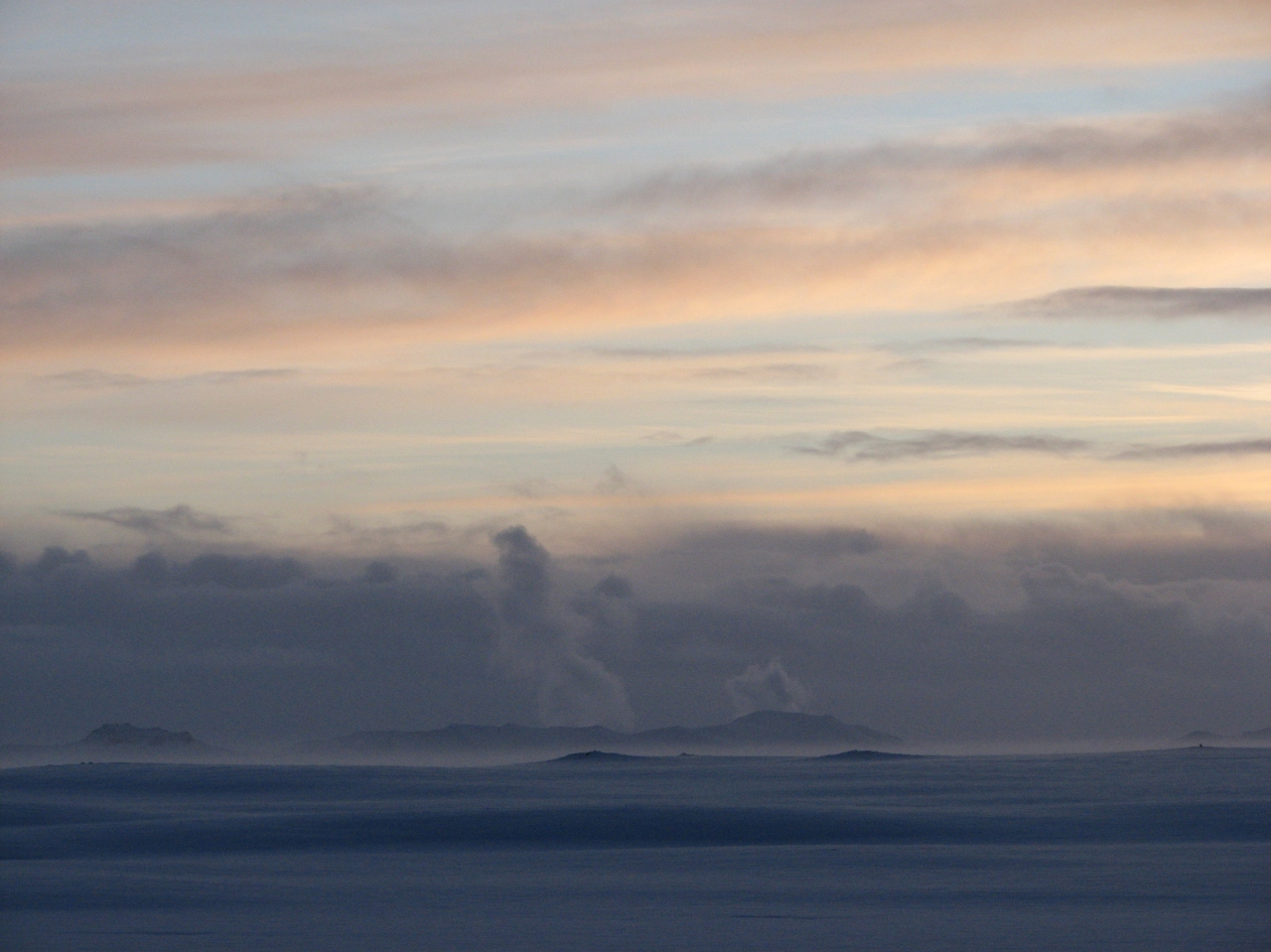