It’s been a lovely homestay. Last night we assembled, as always in the front room for supper, joined by four Russian women who we’ve met en route a couple of times, who are staying in the other room. One of them has terrible blisters and painful knees from the descent and lay on a cushion saying little.

Sonam was sitting cross-legged on the floor helping roll out the barley dough for Ladakhi pasta. He always helps with the cooking and seems to be a part of every family we’ve stayed with. He used an open tin can to cut the dough into circles. Another guide pulled out the disks and flipped them over to one of the young women in the family who twisted them into shape around her fingers and put them into a big saucepan bubbling on the range. The range is wood fired and had the end of a small tree branch sticking out of it. The mother of the family regulated the heat by pushing the branch further in, or pulling it out slightly.

For supper she gave us first, bowls of thin mushroom soup which was all earthy loveliness. As well as the pasta, served in a vegetable stew with a thick gravy, she’d also made us momos – little spinach-stuffed pancakes like dim sum. And of course there was rice and dal. Once again we were amazed how such a feast had been prepared for at least twelve people from such limited resources. These families benefit quite a bit from offering their houses as homestays but it’s a lot of work. Their lives are still very basic, but their welcome is always warm. We went to bed stuffed and exhausted, in a good way. The night was about the most peaceful we’ve had with only the river offering a gentle rolling soundtrack.

After delicious buttery fried omelettes for breakfast we packed our kit up for the last time. I asked our cheerful host with the usual sign language if she would mind having her picture taken and she was happy to oblige but the instant I raised the camera her smile vanished. Camera down and big smile. Camera up, and someone had died. I tried a couple of times and while she always had a big grin in any other interaction, not so for the camera.

So back down the steep slope and across the river on the rickety plank bridge to a waiting van for the journey to Hemis.

This is such a pretty valley, with ancient farms and vivid fields surrounded by broad shouldered mountains. I am sorry to be leaving it. 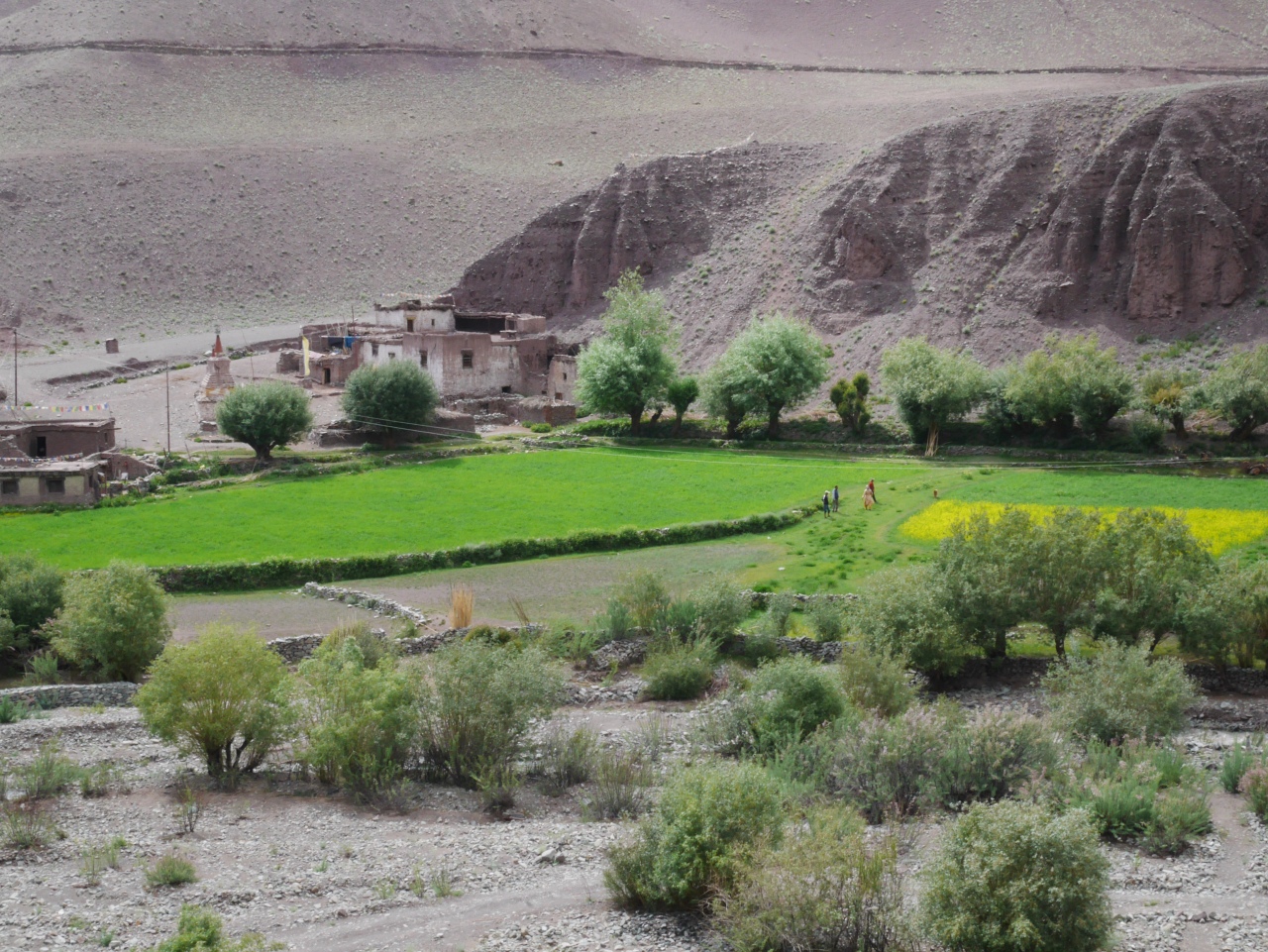 Soon we hit the scruffy outskirts of Hemis, and a great line of army trucks moving through, blowing black smoke. It was all a bit of a shock after the past few days of clear air, no roads and complete tranquility. Our hotel was in the village of Sakti, half an hour up the valley, passing the lofty Chemrey monastery on the way.

The hotel manager was flustered that we had come earlier than expected and we’d caught him in jeans and a t-shirt, but he put strips of white cloth around our shoulders to welcome us and was all for whisking us off to our rooms. We though, had to say a sad goodbye to Sonam first. He was terrific. Always quietly ensuring we had everything we needed, a mine of information about Ladakhi and Buddhist culture and in just a few days, a friend. We did our farewell photos and waved him off.

The hotel felt way over the top after days of homestays, but the shower, oh the shower… We had an afternoon doing nothing much and giving our legs and lungs a rest.