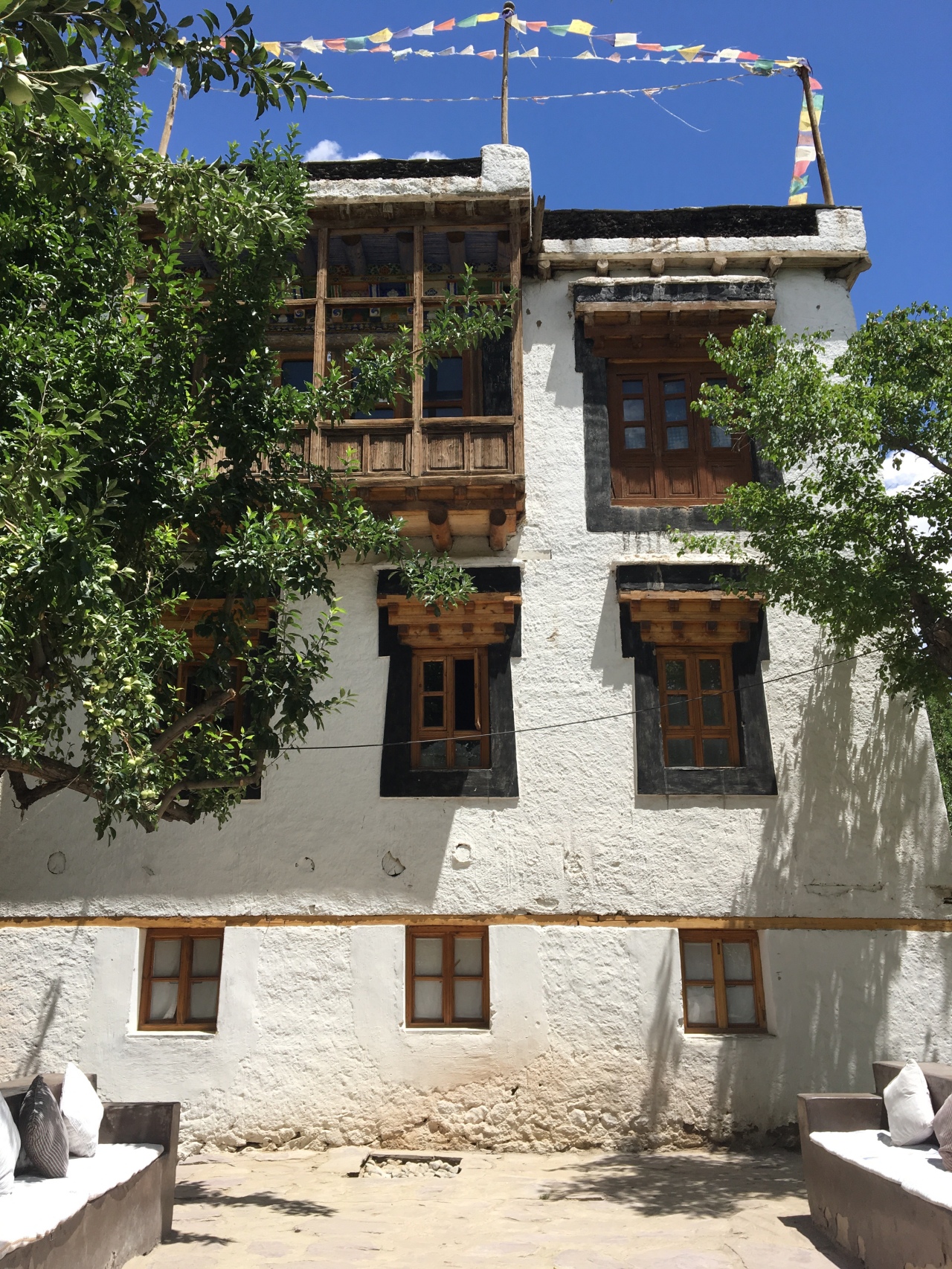 When we arrived back at Nimmu House an elderly woman was making her way around the outside of the building with the aid of a stick. We’d seen her at the “White Taro” Buddhist ceremony on our first visit and Adam the manager said she was the daughter of the tax collector who built this house a century or so ago. It was where she grew up and where she spent most of her life until the estate changed hands. She still lives close by and comes every day to renew her connection with the house.

Nimmu House really is the perfect incarnation of the best of Ladakh, merged with the comforts of home. It is a beautiful old building in the traditional style, with modern plumbing, an excellent chef serving mostly local food (and some decadent puddings) and the characteristically warm and friendly welcome from the Ladakhi people here.

One is Stanzin, a neat and compact fellow who lives next door and offers his services as a guide, which we took up for a day hike in the Sham Valley.

The Sham Valley trek is known as the baby trek because of its relatively low altitude, its proximity to villages and its gradual ups and downs. It takes only three days to complete and we did just its final day, up to four thousand meters or so (just over 13,000 feet for those of us who’s schooling keeps us in the 19th century).

The drive to the start point in the village of Hemis Skupachan goes west along the road to Shrinagar and Jammu and the border with Pakistan, which of course both India and Pakistan locate rather differently. 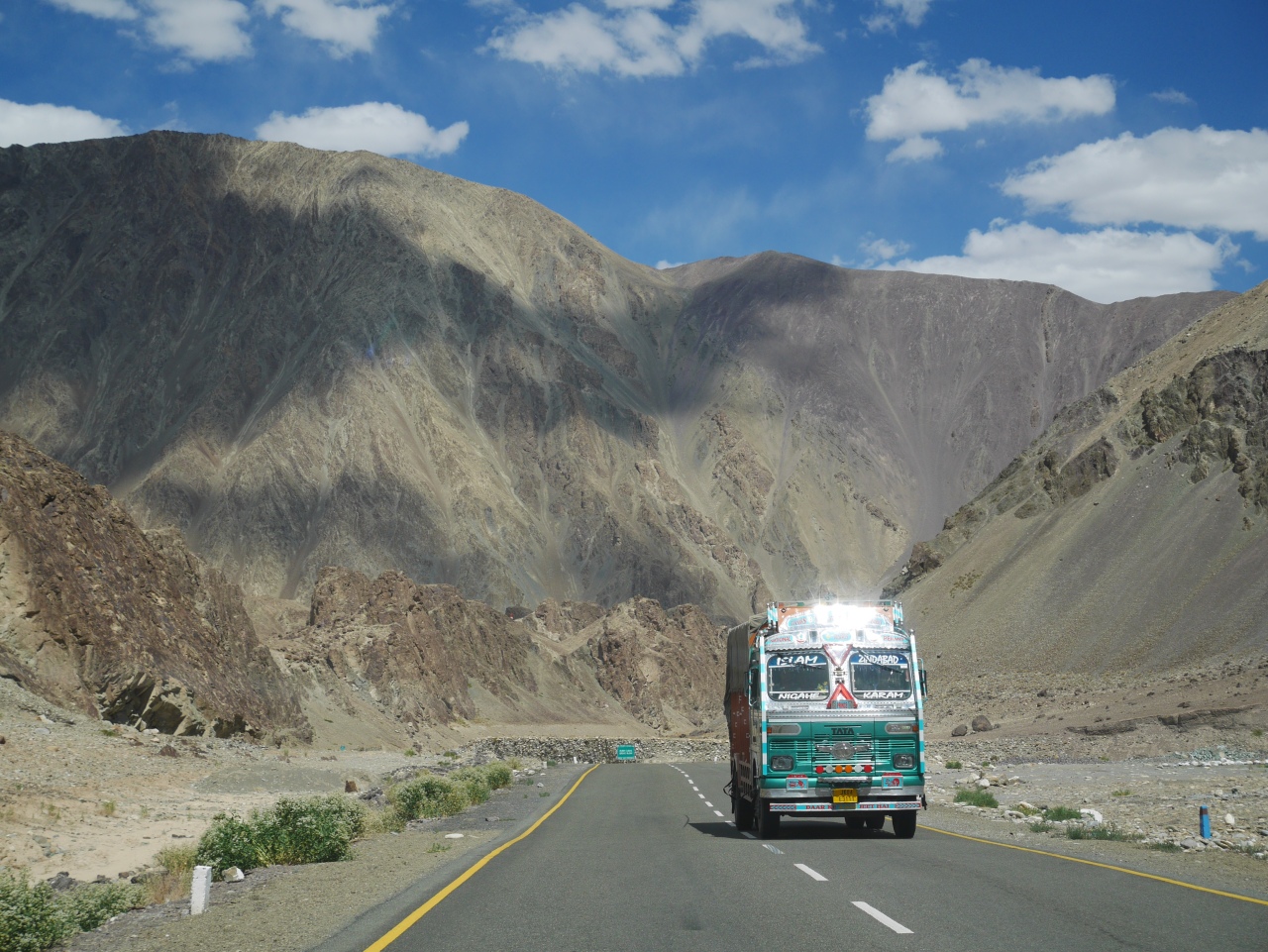 Big old Tata trucks in pale metallic turqouise, adorned with punchy statements (“Miss You!”) grumble their way through the Himalayas on this road. It is flanked by what feels like a great black tidal wave cresting white – the Zanskar mountains. 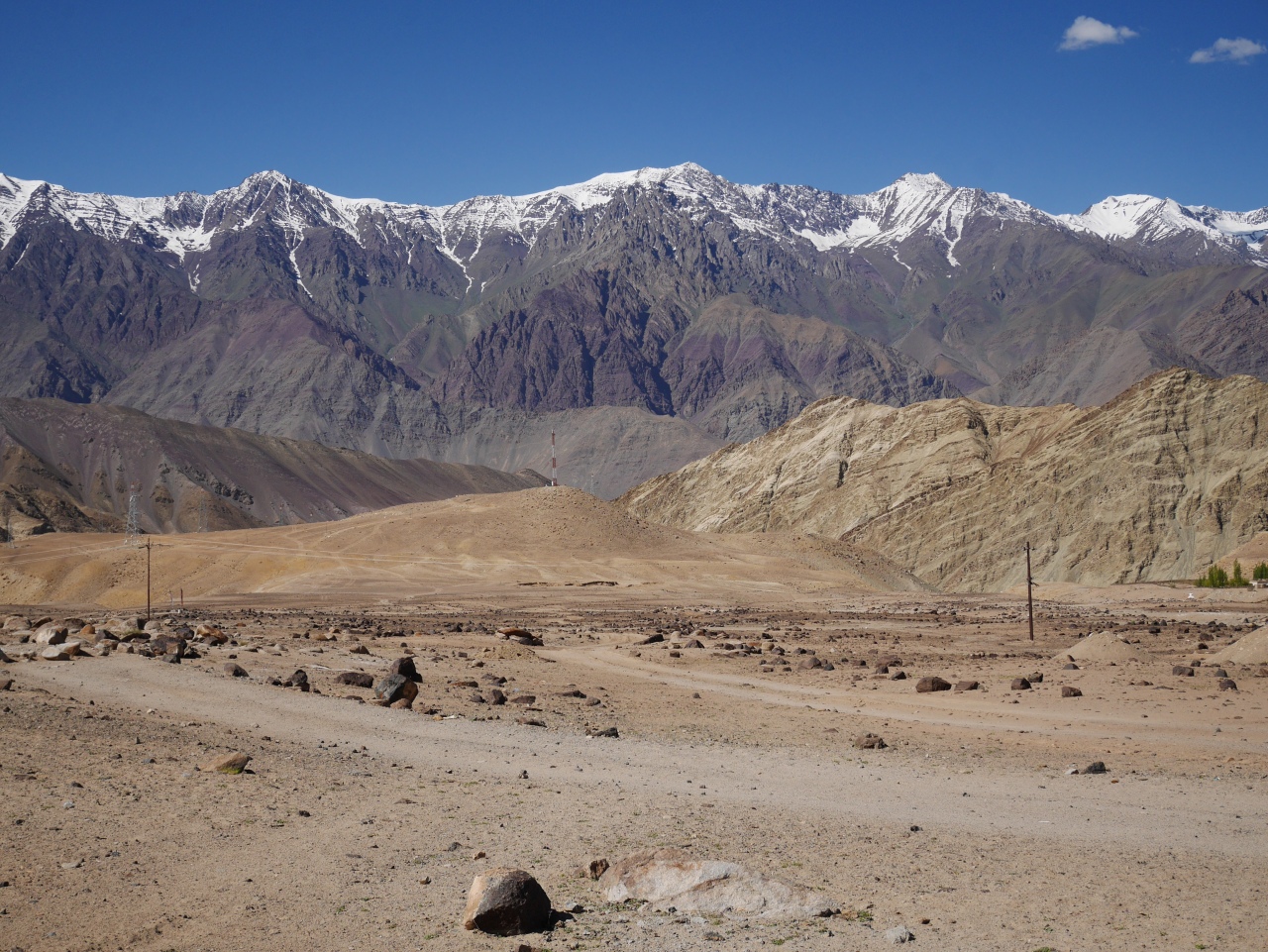 The air is so clear that you can see with perfect clarity every single jagged ridge, every white streak of snow trapped in every gully, under a sky so bright blue you can’t look at it without sunglasses. It was a beautiful journey with that mountain wave rising up next to us.

We came to a fork and took the right track which quickly turned into an unmade road, or rather a road being made by teams of Nepalis and “Kashmiris” said Stanzin dismissively, drawing a clear line between Ladakhis (who also live in the state of Jammu and Kashmir) and people who aren’t from Ladakh. “The Ladakhis are tending to their farms” he said.

There are whole families engaged in this work, husbands and wives moving rocks in the heat and the dust while their kids look after each other. At the edge of one road, just before the verge disappeared into the void, a little lad sat clutching his baby sister to his chest for all he was worth. 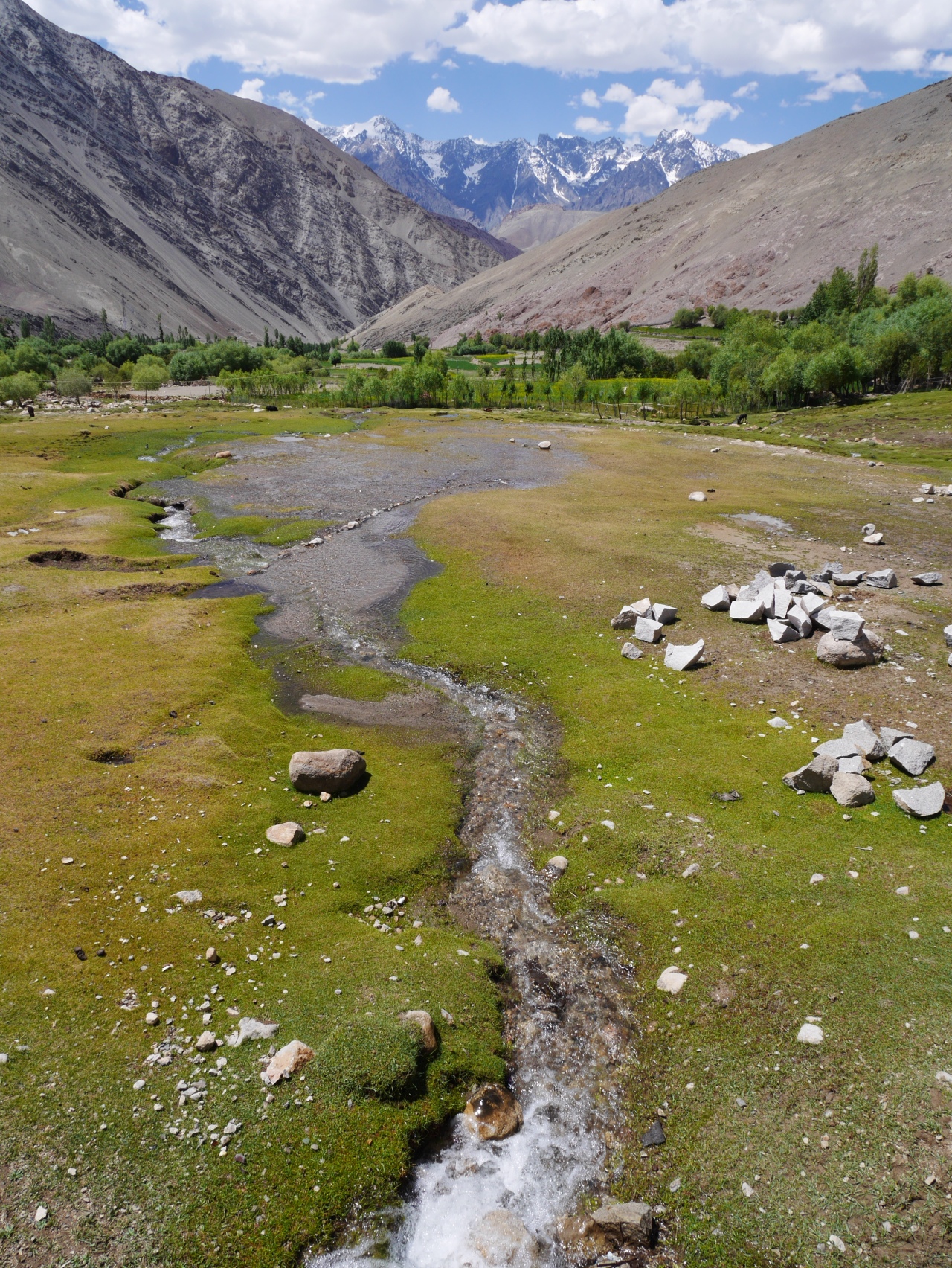 Hemis Skupachan has an alpine feel to it. Cold, clear streams running through lush pasture. 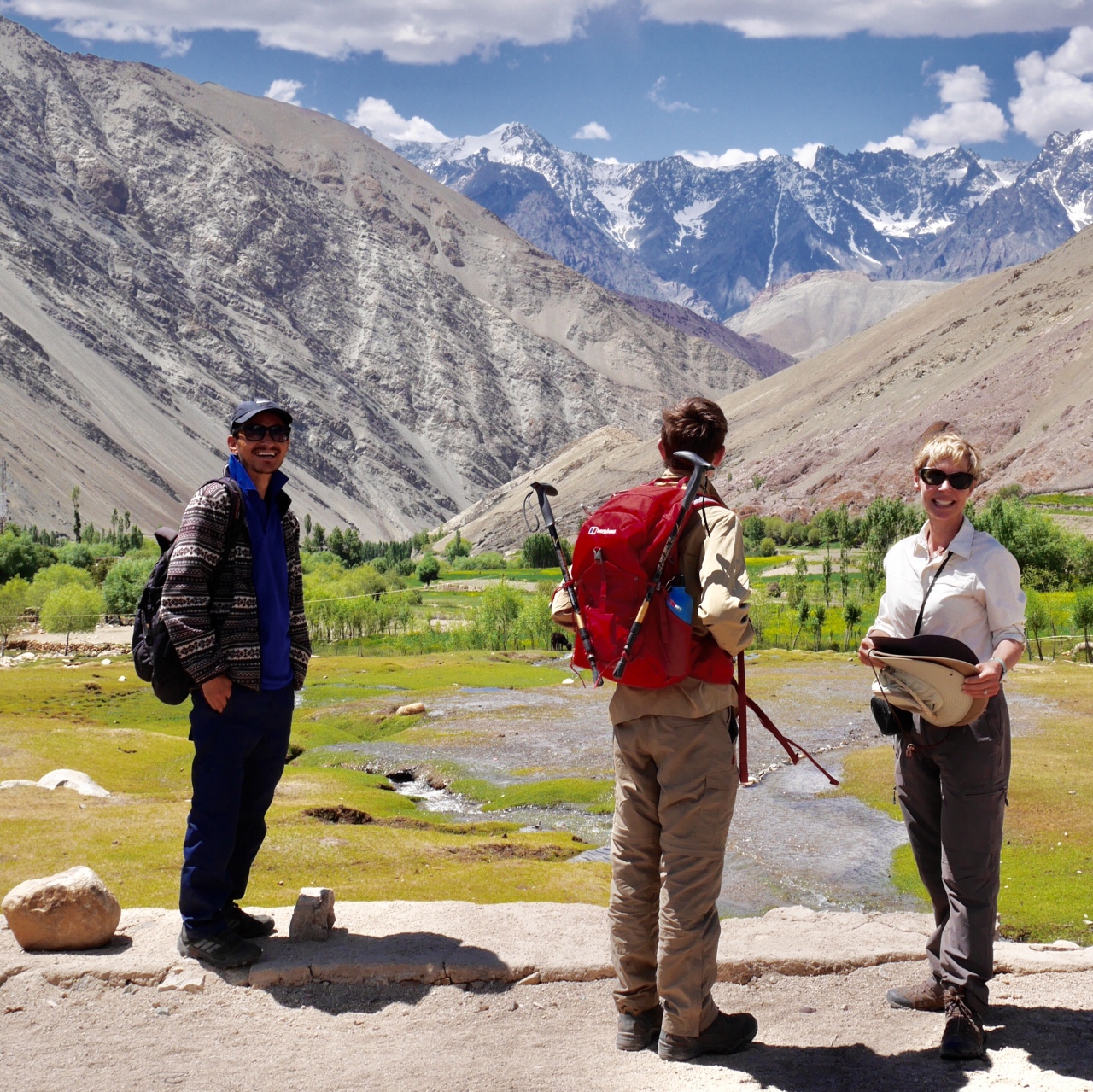 This is the “lower warmer and more prosperous end of Ladakh” according to a marvellous book by Jaroslav Poncar, a Polish photographer who was one of the first westerners into Ladakh in the mid 1970s. He makes the point that such things are relative, but this region doesn’t feel quite so brutalised by its surroundings. The air has more oxygen, and it’s warmer. There is more water too so farming is less of a challenge. Stone huts housing water mills line the river. 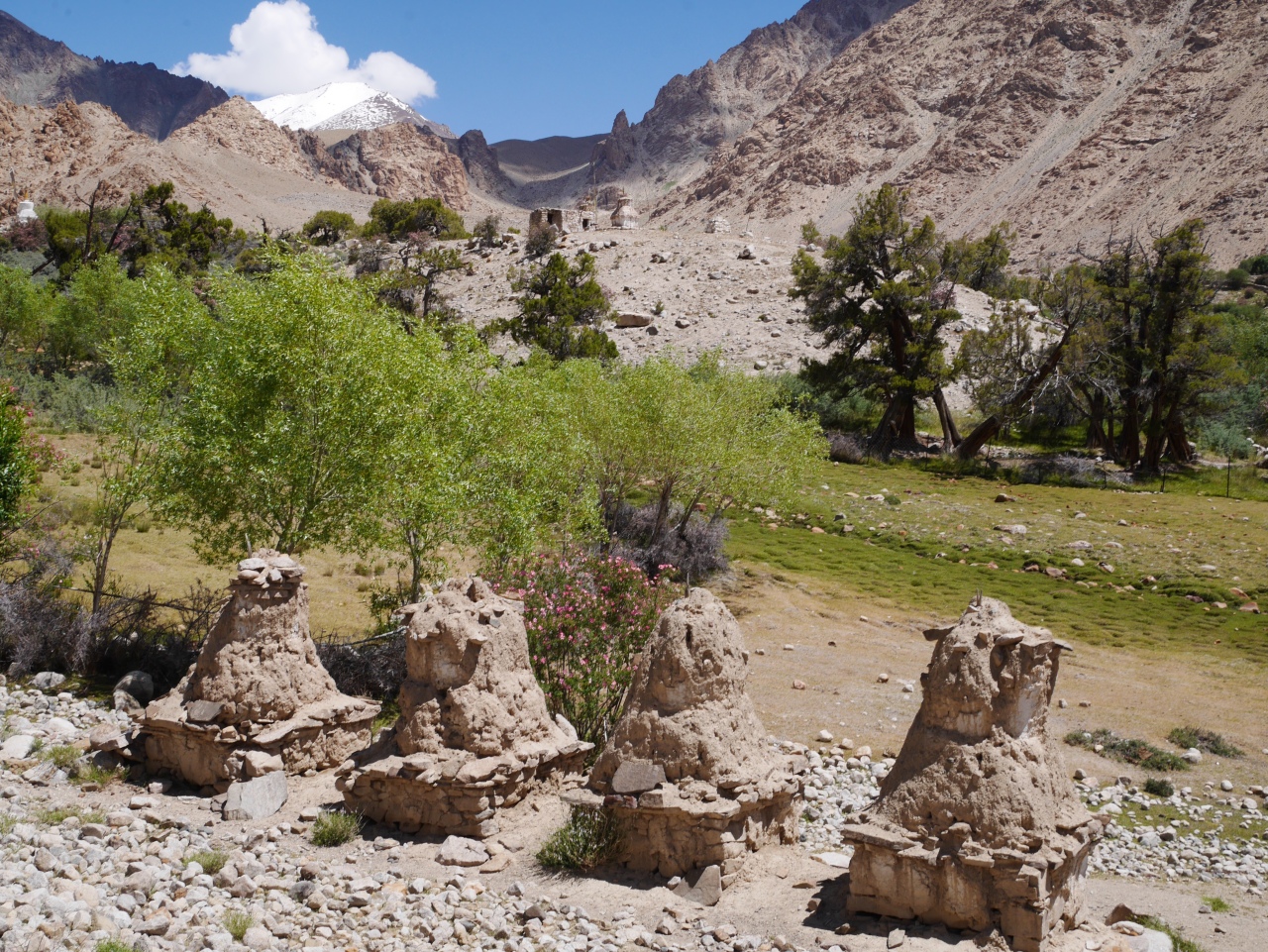 We strike out uphill on a narrow path between farms, studded with old stupas which sprout like decaying mushrooms, grey and ragged. On the way we pass a “Resource Map” of the region which shows where we should look for such animals as ibex and Tibetan wolf.

Stanzin says there are at least three wolves living in the Nimmu Valley where we are staying and he tells us the story of the snow leopard that killed his three sheep in a small barn attached to Nimmu House. His daughter went in and saw the leopard which had eaten itself into a stupor. It had climbed down the willow tree growing through the barn roof. What did he do? He shrugged “We called the animal control authorities who came and took it away to be released in the mountains.” There is compensation available in such cases. 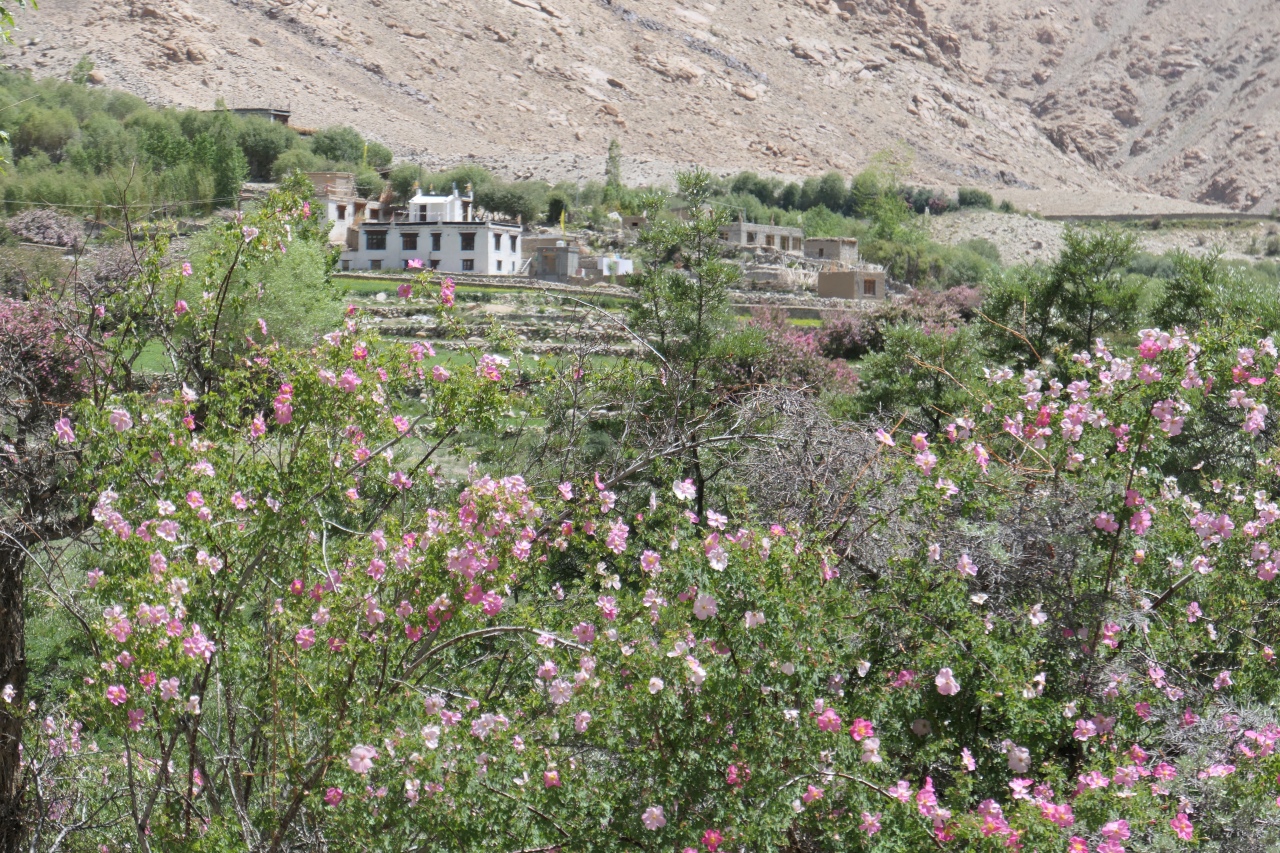 We are heading for a pass fluttering with prayer flags which reveals a new vista of brown sloped mountains into which we are headed. 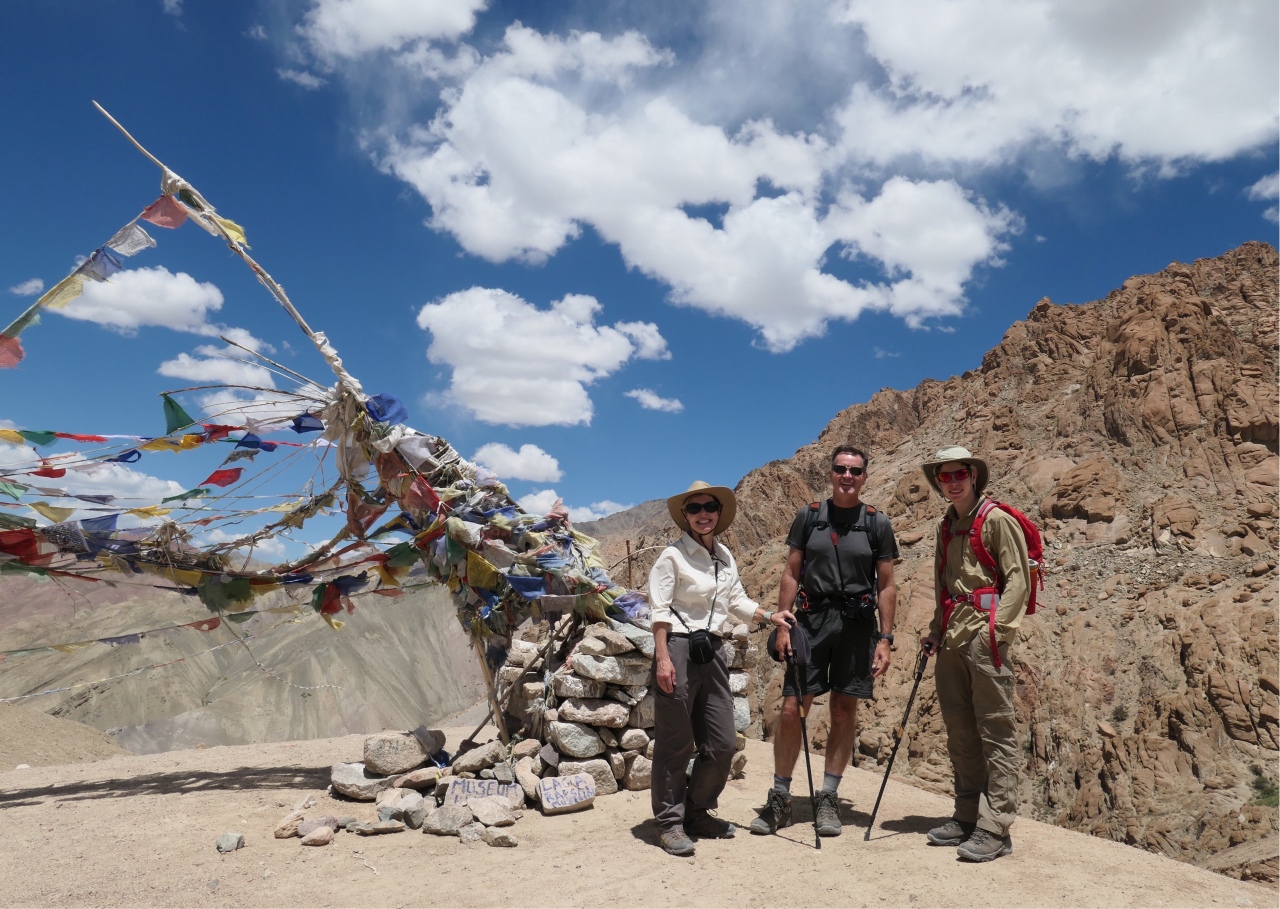 Stanzin tells us we will head down, before climbing up to a summit on which we can see two tiny figures, impossibly high up.

A hopeful dog comes with us, not really acknowledging our presence and trying to give the impression it was coming this way anyway. 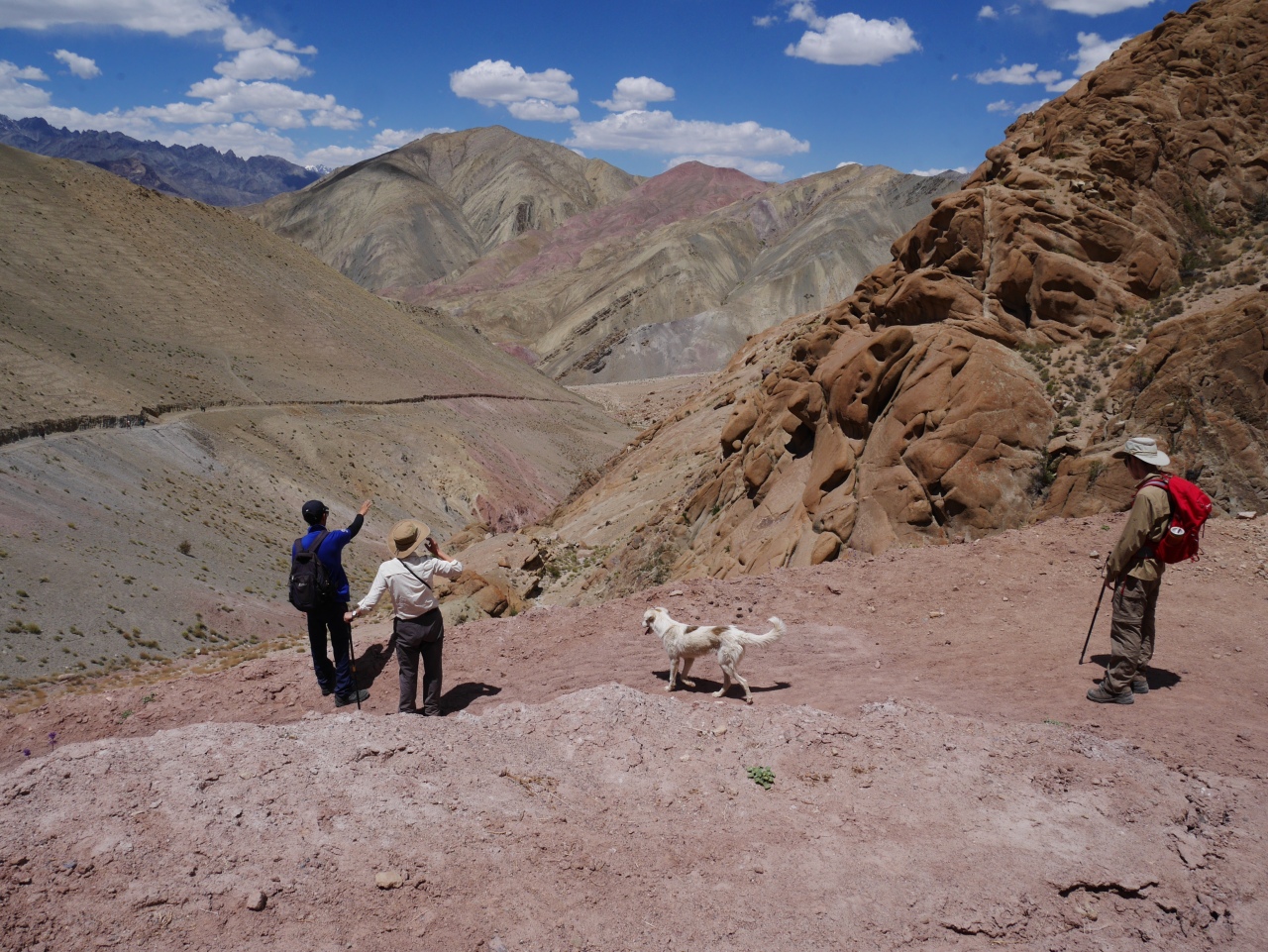 We are on a wide path hugging the hillside. Another group of hikers is far ahead of us and we can hear them talking loudly to each other. “Israelis”, says Stanzin ruefully. Like British stag-do tourists, young Israeli hikers seem to have a bit of a reputation here, and it’s not good. “They smoke hash and play music, and they are very loud” says Stanzin. They also don’t seem to employ guides (which may be part of the issue), and consequently they get stuck, or lost. The ones way ahead of us have missed the tiny goat track turnoff that we take and Stanzin whistles and shouts to get their attention. “There is no village that way” he says. “The path eventually comes out at the army barracks on the highway”. He tries to indicate that they need to climb up to where we are to get over the pass, and a couple of them do move, antlike in our direction before rejoining their group and continuing down the wrong way. Stanzin shrugs in a “what can you do?” kind of way.

We continue down through a grassy cleft in the rock before rounding the hillside and heading up towards the pass, through the creamy sweet scent of wild roses which are in pink bloom, and clumps of intensely perfumed wild lavender. 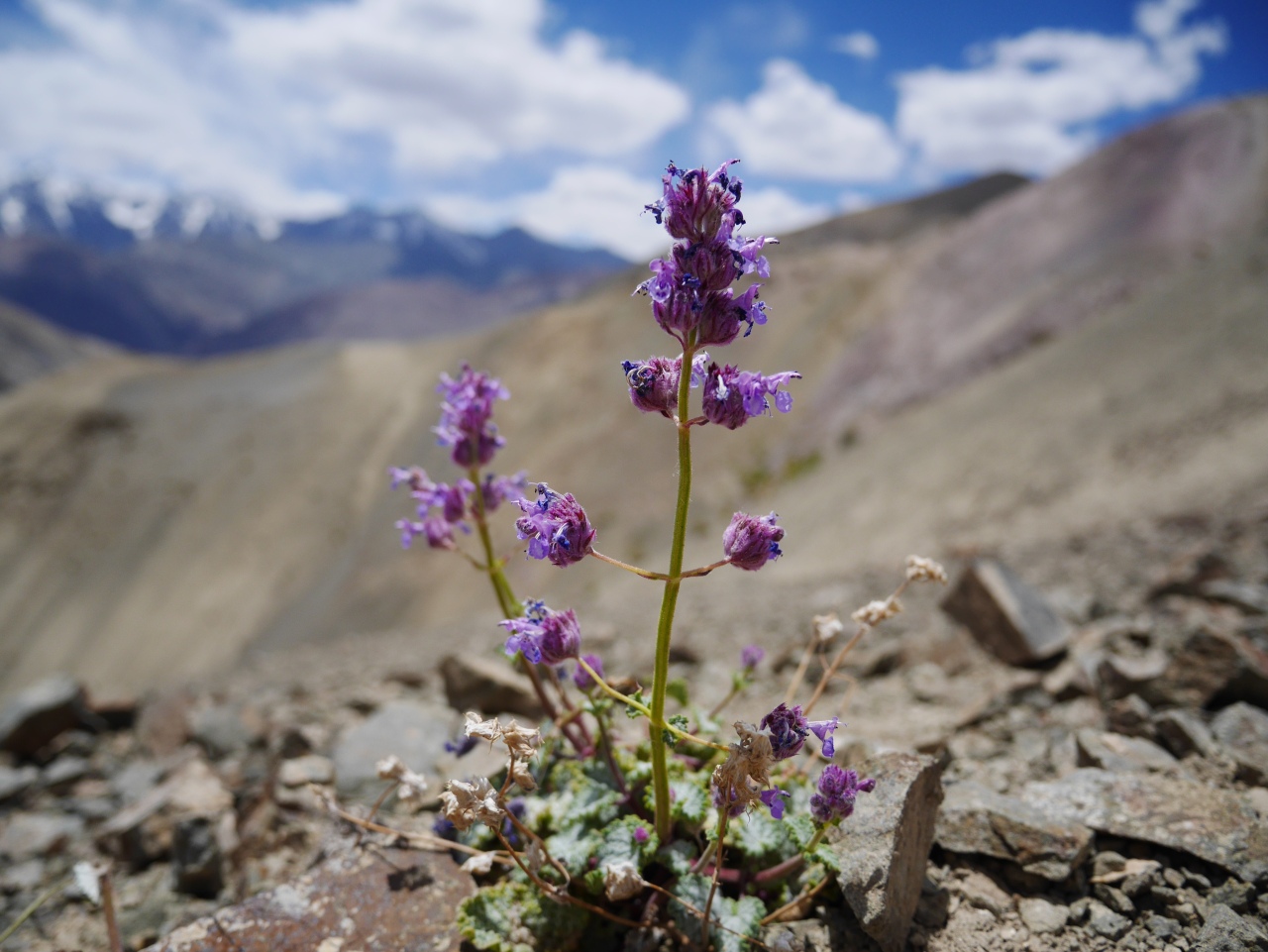 The dog gives up on us and turns back, perhaps wishing it had thrown its lot in with the Israelis who were at least going downhill. It’s a stunning walk, perhaps the prettiest we’ve had in Ladakh. At the pass, another group of Israelis, a man, two women and three little kids wonders if we’ve seen their companions. We tell them they were headed off towards the highway and they seem unsure about where they need to go next. Stanzin points them to the trail down the other side of the pass. When we start walking up to the rounded summit a little way above, one of the women shouts “Where are you going?”.

“Just to the top” I call back. “But we will be going down the same way as you”

There are two little summits in fact, and having come this far we walk another couple of minutes to get to the slightly higher one. It’s a grand place for lunch, under hot sunshine with a cool wind at our backs. 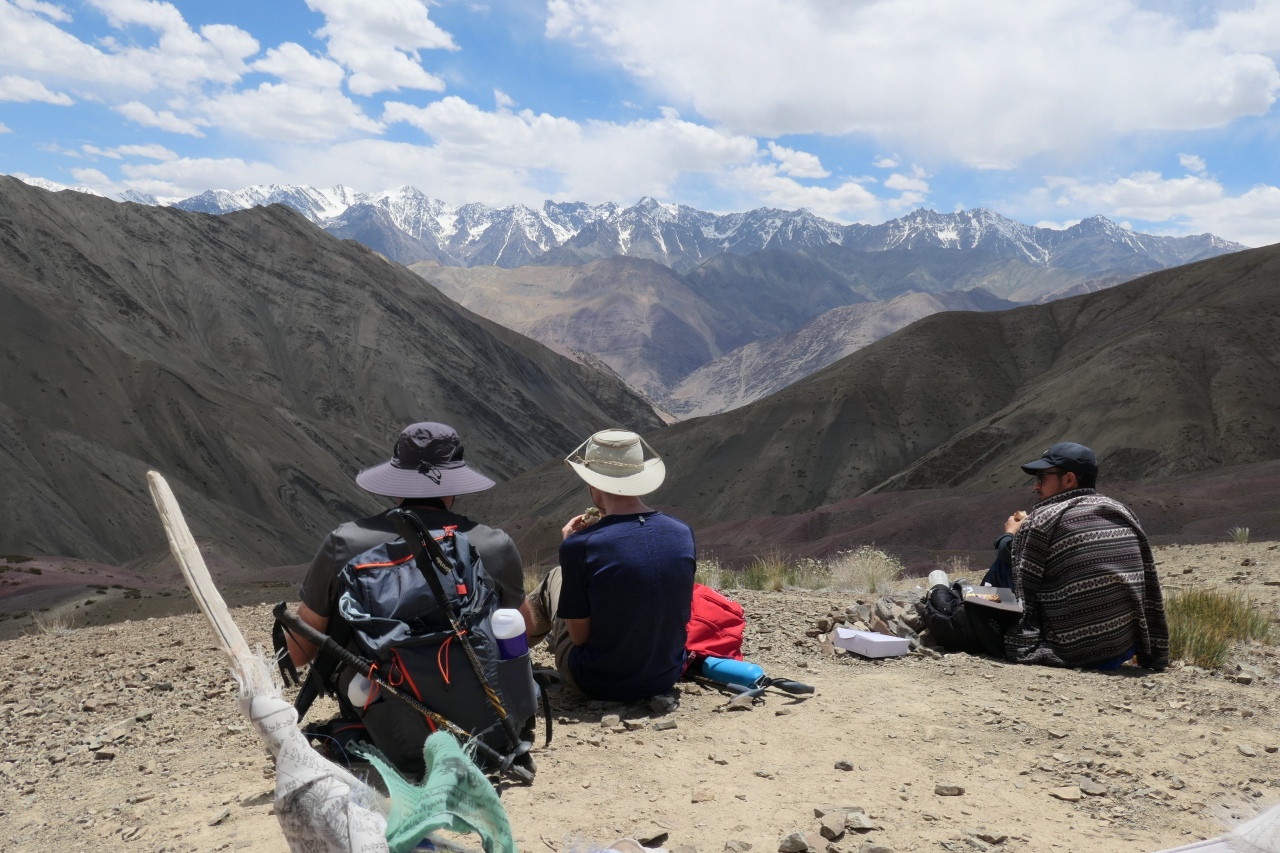 From here it’s only a short walk down to the next village – less than half an hour. On the way down we meet some of the group who were at the pass. They’ve got ahead of the man and one of the little girls and are just about to take the wrong fork in the path when Stanzin puts them right. “That would have taken them away from the village”. We continue down stopping at a tea tent and hoping for apricot juice or mint tea, but finding only Mountain Dew and Coke, cooling in a stream of river water. It’s cold and refreshing though.

Crossing a bridge over a glorious glacial river, our driver is waiting to take us back to Nimmu. 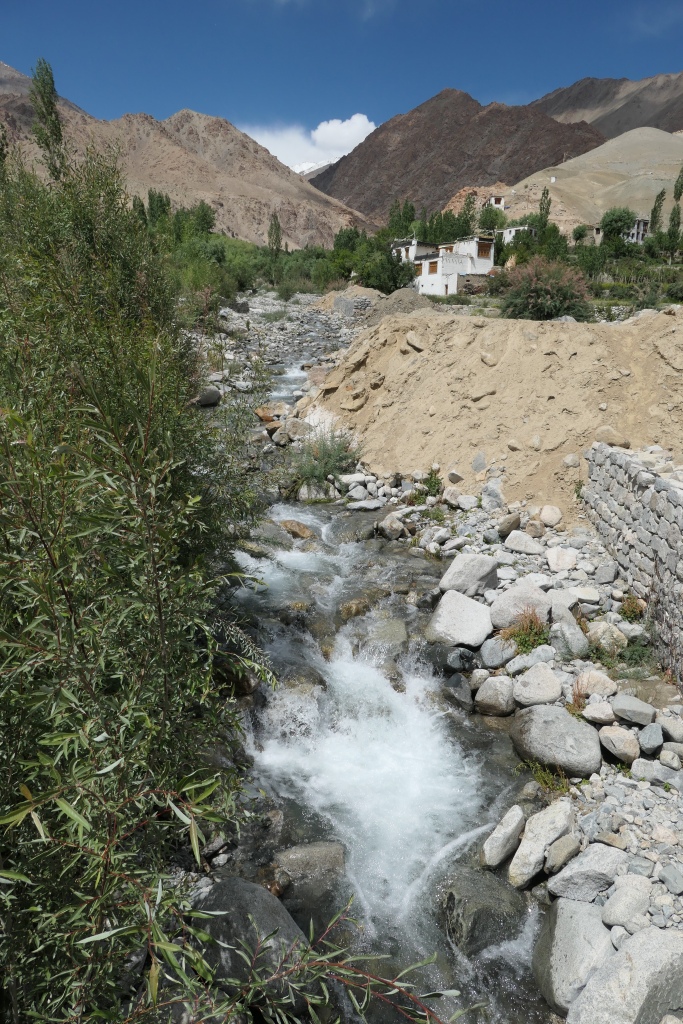 Stanzin tells us the river is the same one that was gathering itself higher up at Hemis Skupachan where we set off.

We wind back down another road in the process of being built, narrowly avoiding confrontations with a digger and an impatient truck full of rocks, with different families living their lives on the roadside. 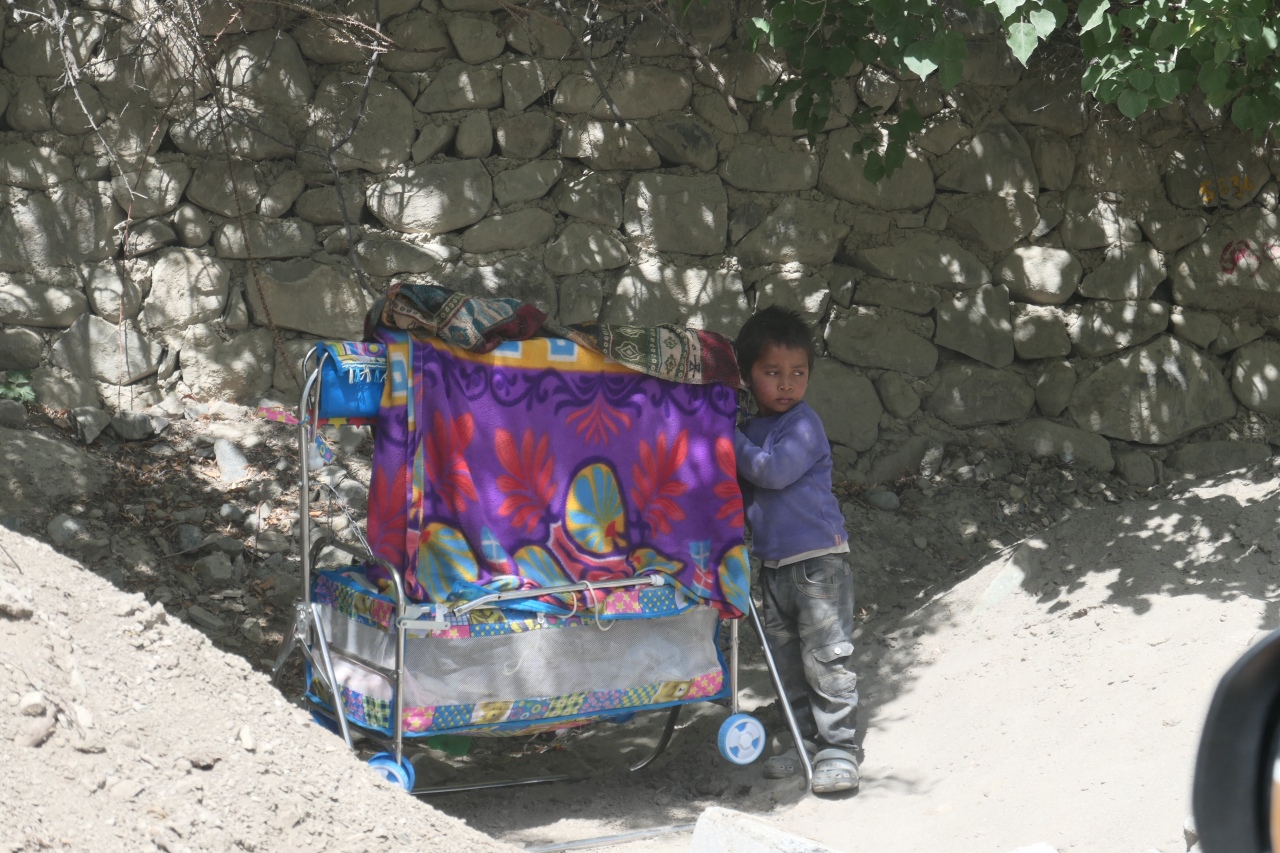 Here there are shiny new hotels and guesthouses under construction, waiting for the road to be finished. When it is, this will be a different place, with tourists and buses and souvenirs and money. And that might all be welcomed by the people here, but something of what makes this place so special will have been lost.

Eventually the old track hits National Highway One. Right, to the heart of Jammu and Kashmir, left to Nimmu and Leh. Joining the highway (still only a two lane tarmac road) seems to unleash a racing fervour in our driver, and in fact every other driver on this stretch of road. Everyone is jockeying for position, driving on both sides of the road as it curls alongside the Indus River gorge. Our driver seems to take it personally that the tiny red car ahead of us is going just too fast to overtake. He thinks he sees a chance as we head into a blind bend but sensing what he is thinking I say “No, no, no. We are not in a hurry” and he snaps out of it. Still it is a lurching winding ride and I sense it’s not often that these guys get to put their foot down.

We are fifteen minutes from Nimmu when the ancient fortress at Basgo rears up. 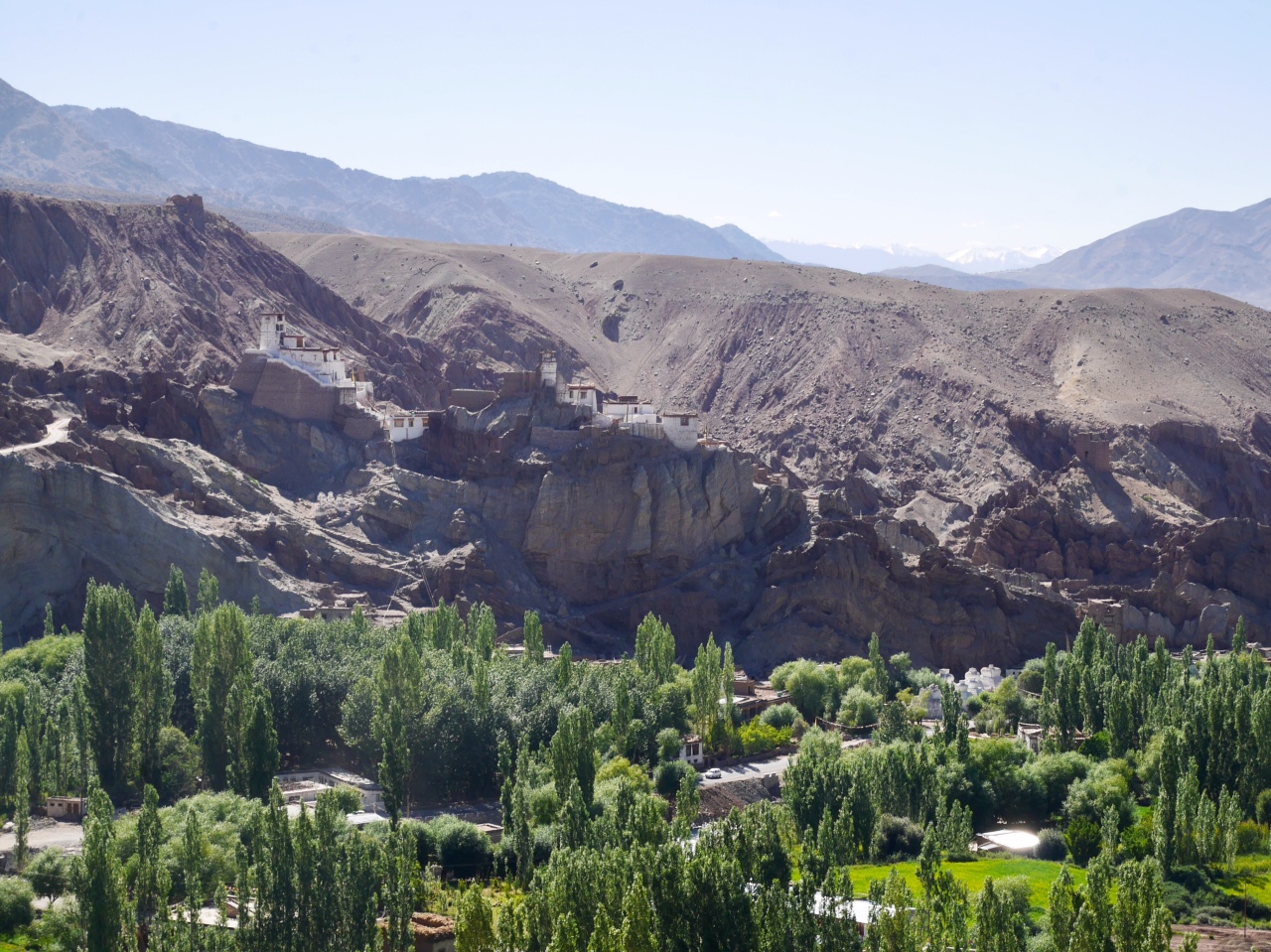 Stanzin is anxious to show it to us, Philippa and Tom are anxious to get back to Nimmu House and relax with some mint tea but I want one more blast of history and we turn off the road onto a narrow track that hugs the cliff.

Basgo was the capital of Lower Ladakh in the fifteenth and sixteenth centuries and the old fort survives today as a monastery. Its different incarnations are preserved in the ruins of newer buildings on the same site as well as a tiny room built as a mosque for the Queen of Baluchistan when she married into the royal family here. It too is now a Buddhist shrine. Stanzin and I went in and he immediately began murmuring incantations to the Buddha statue. We squeezed around the back of the statue (clockwise) and emerged back through the tiny entrance into the searing sunlight.

The main temple is at the highest point of the complex. It felt the most ancient of any of the places we’ve been to here. 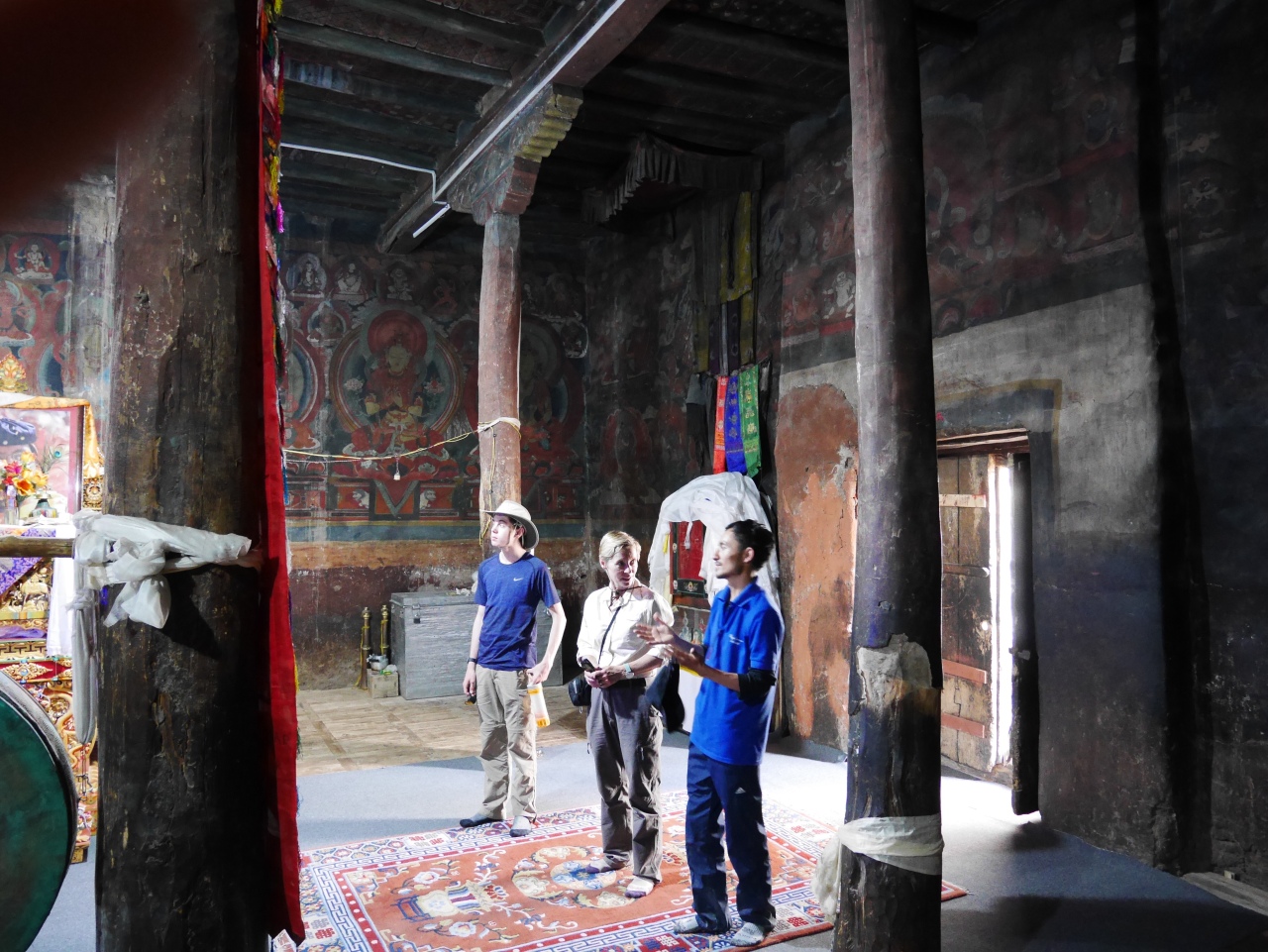 Tall wooden pillars holding up a high ceiling and every inch of the interior painted with Buddhist frescos. 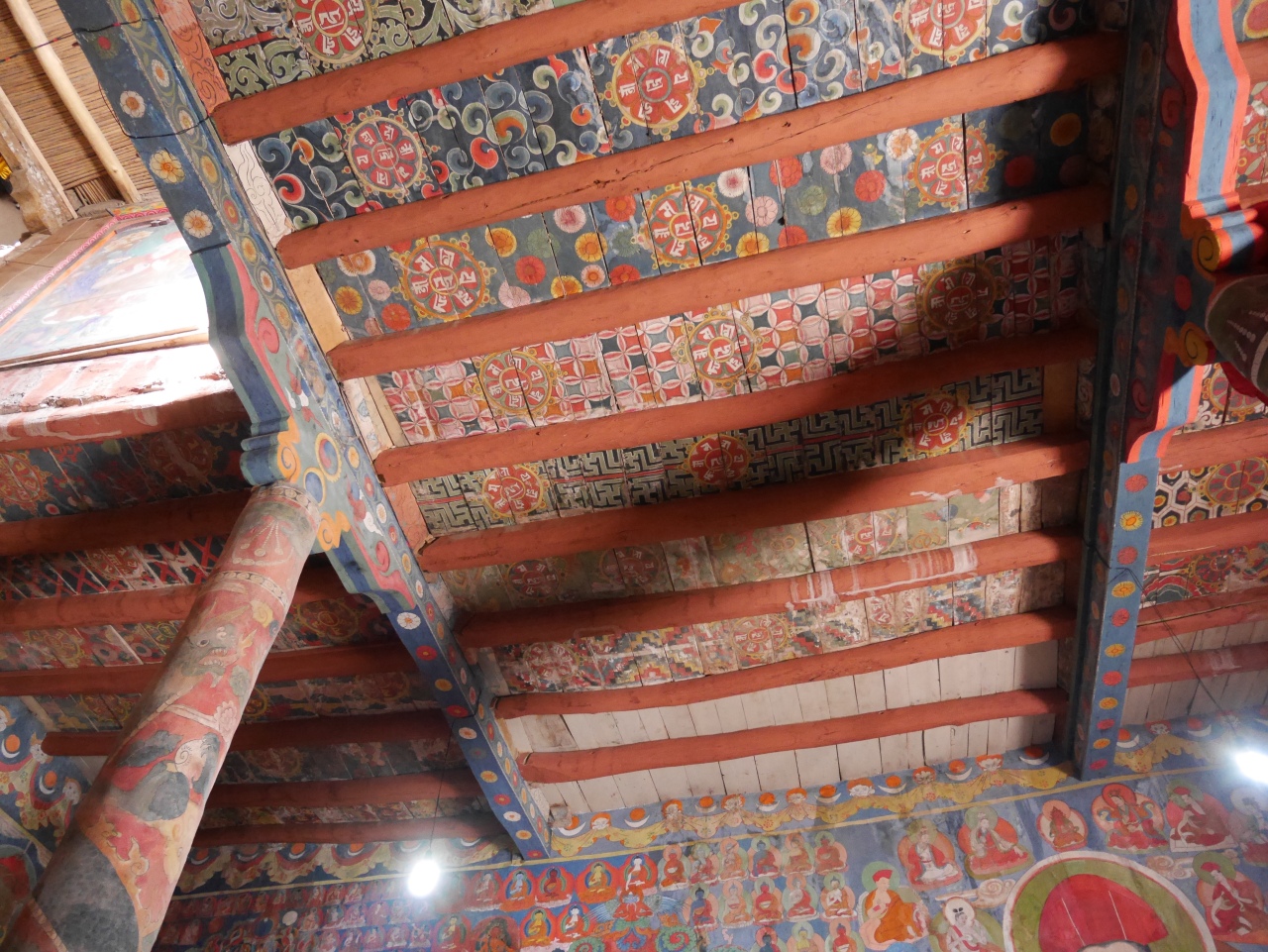 There were also extraordinarily detailed representations of court life in the fifteenth century. 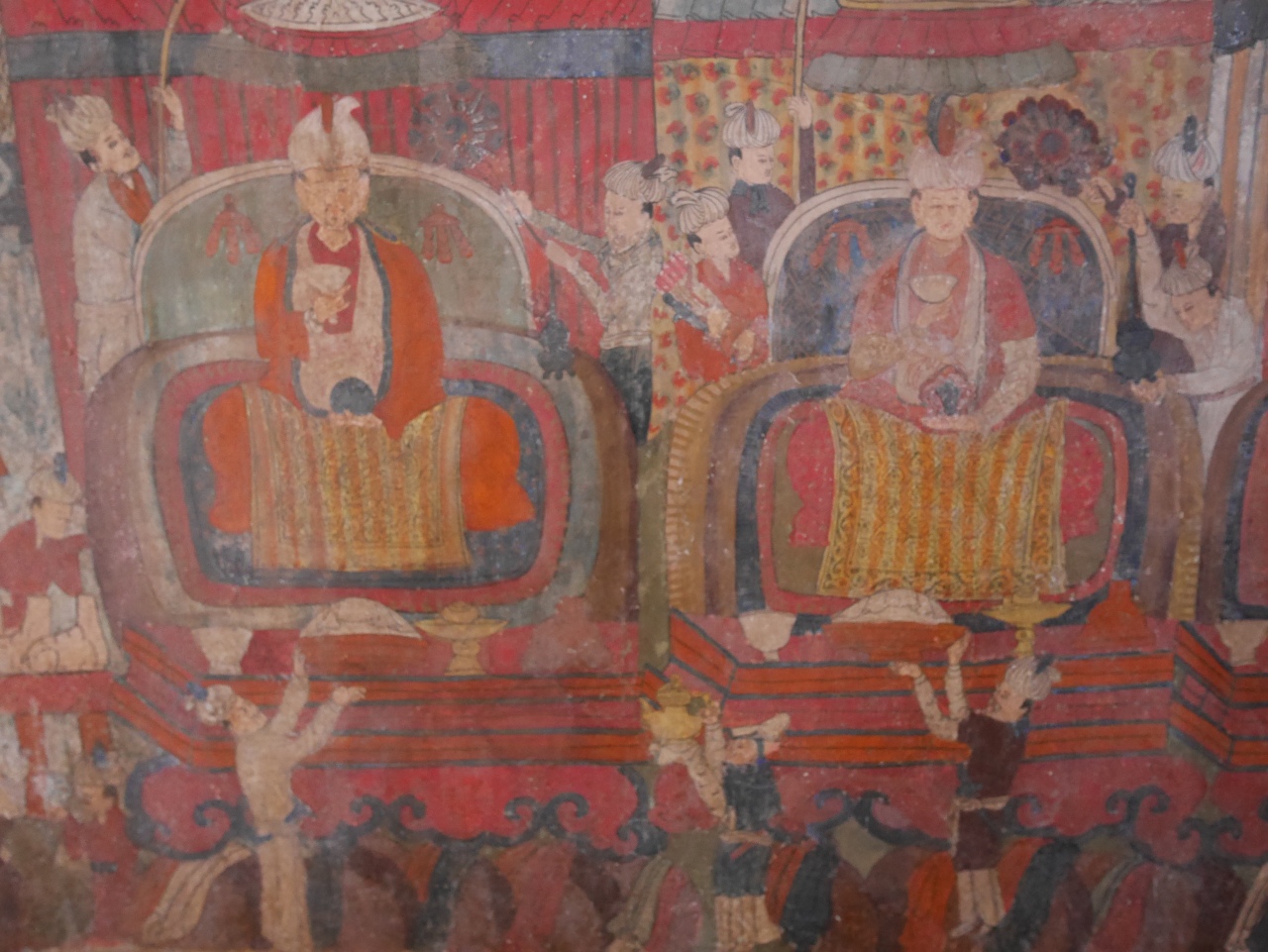 Philippa said it reminded her of the Bayeux tapestry. The paintings survived because very little natural light enters the temple, although Stanzin said the images have been darkened by centuries of smoke. I asked about a much faded stretch of writing at about hip level which Stanzin said was an ancient language which pre-dated Tibetan. 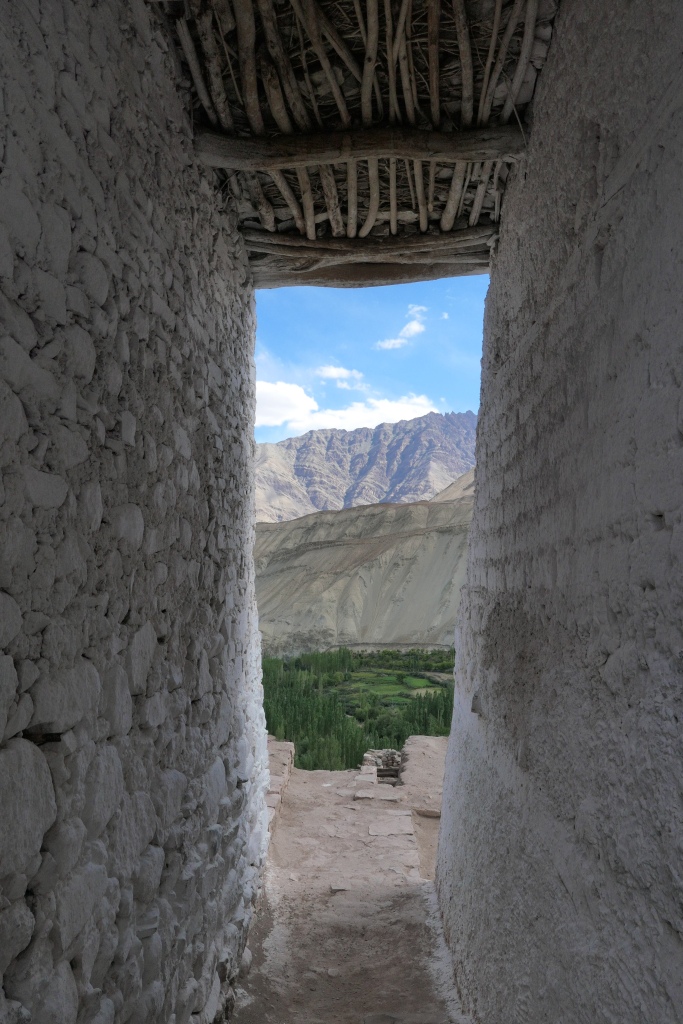 It was lovely to have this ancient place to ourselves in the late afternoon light. 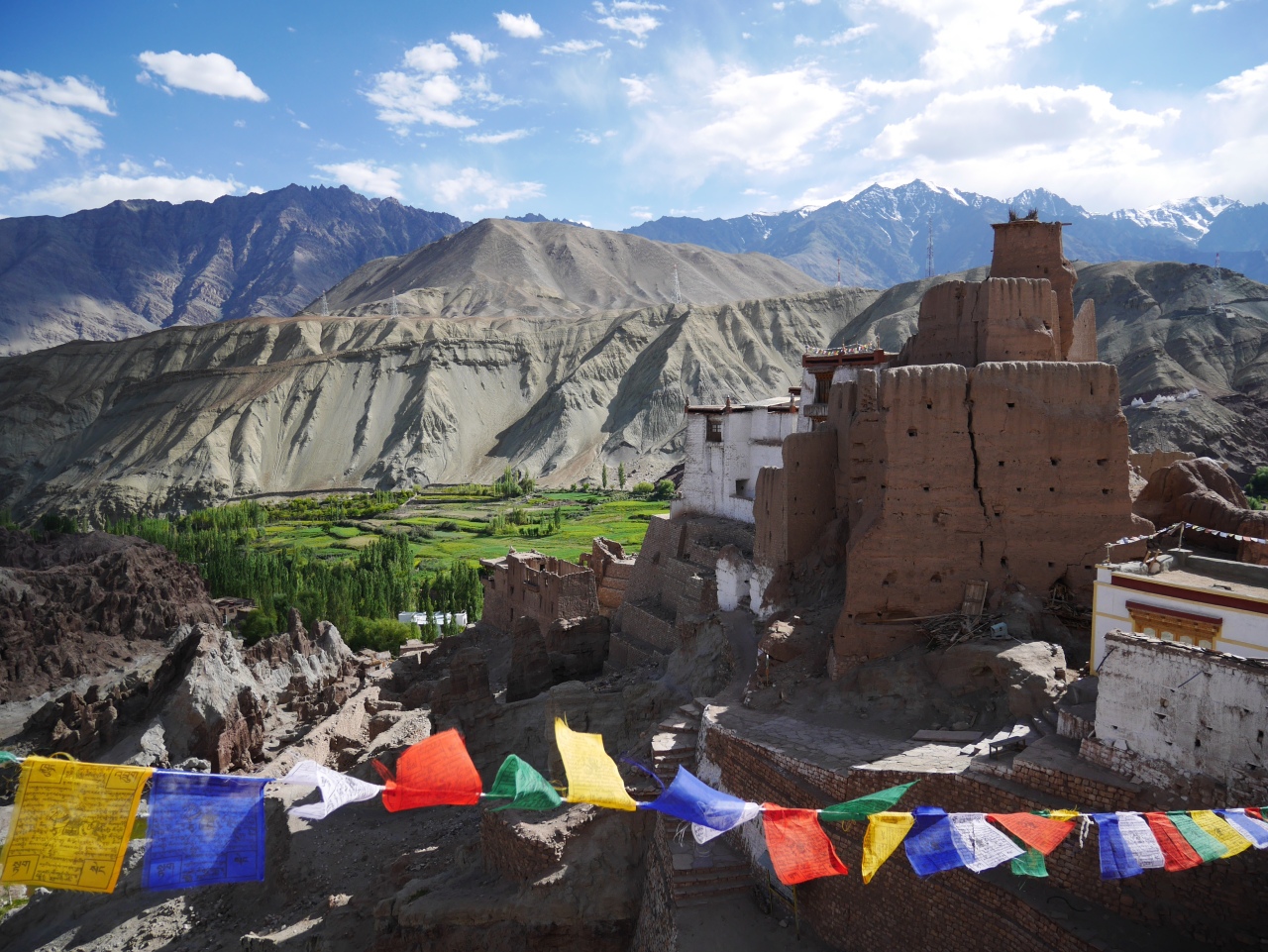