Ok. You’ve just arrived in Leh, you’re looking at the mad traffic, the cows in the street, the languid dogs, the ancient palace on the hill, the Pashmina places, The Royal Enfield motorbikes, the coffee shops with “free WiFi!!!”, the water gushing through channels by the roadside, the German bakeries, the multicoloured adverts for treks, the beeping horns, the call to prayer, the shouts between friends, the snow on the mountains and the stupas on the ridges and you think, “Where do I start”

You start at the Central Asian museum. It’s tucked away behind the hubbub of the main street in a purpose-built stone and wood building designed to resemble a traditional Tibetan tower.

It’s an absolute gem. A tranquil place with photos of Leh and Ladakh going back to the late nineteenth century, when Leh’s main bazaar was at the edge of a grand boulevard lined with poplars. In the museum are some of the objects and clothes that were used then and (in some cases) are still used today. Flint and steels that were worn around the neck, majestic felt hats, big pieces of silver and turquoise jewellery, vast cooking pots and daggers in scabbards with different styles for men and women. It shows Ladakh as one of the major crossroads of the Silk Route, where Buddhism is a central part of the culture. By the time you have climbed up floor by floor you leave it with a better sense of what Ladakh is all about. The exit brings you out onto the perfect view of old Leh.

We were amazed to discover that a snow leopard had been found in that mosque above just two weeks ago. Apparently the older ones will sometimes come into populated places to find food when they get too old to hunt. That would have been a surprise for someone…

We came out of the complex into an alleyway lined with hole-in-the-wall bakeries with cheerful bakers bantering and spinning flat bread. It felt like a little bit of the ancient city.

The Palace is a must-do, but we’d done it so we also climbed up to the Shanti Stupa facing the palace from across the valley.

It was the brainchild of a Japanese Buddhist in the 80s who thought Leh’s Buddhists deserved both a focal point and a symbol of the city’s spirituality. 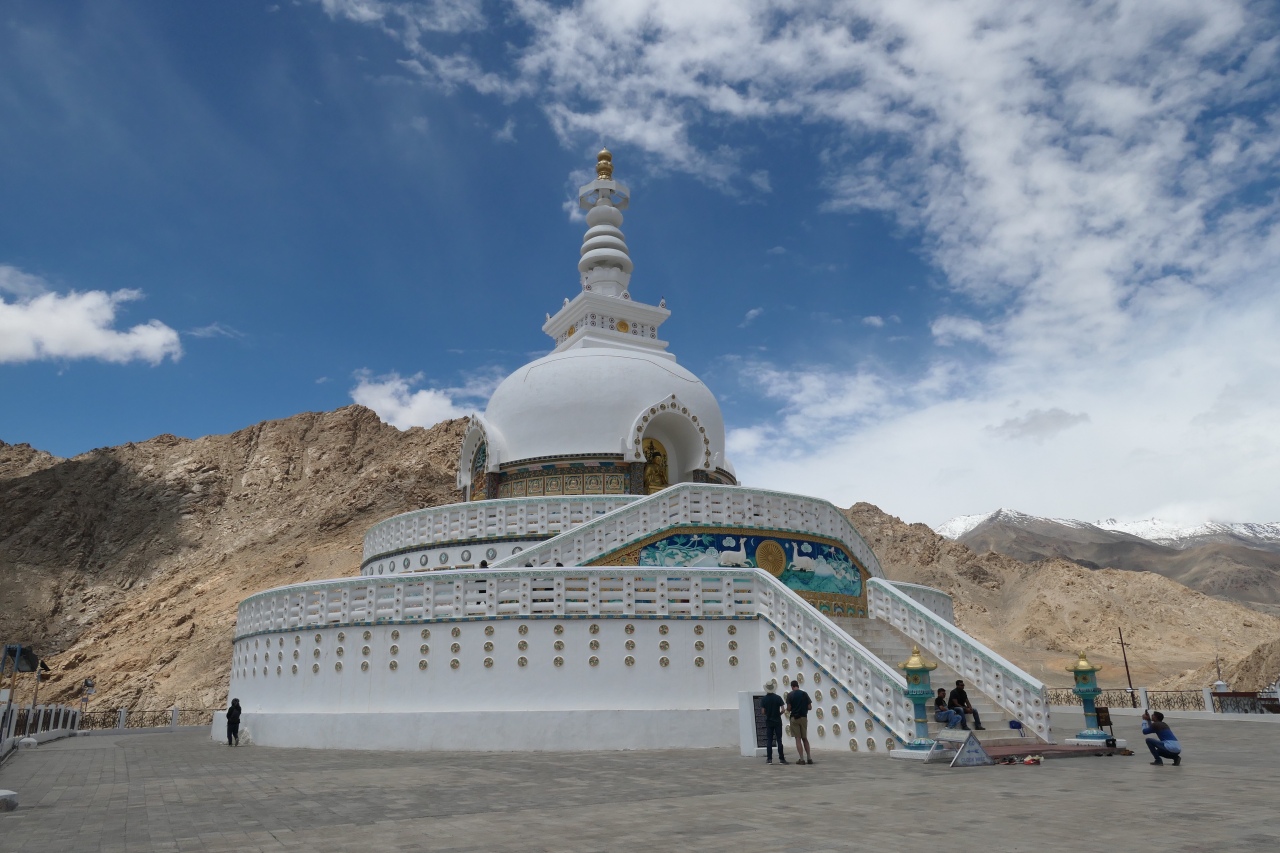 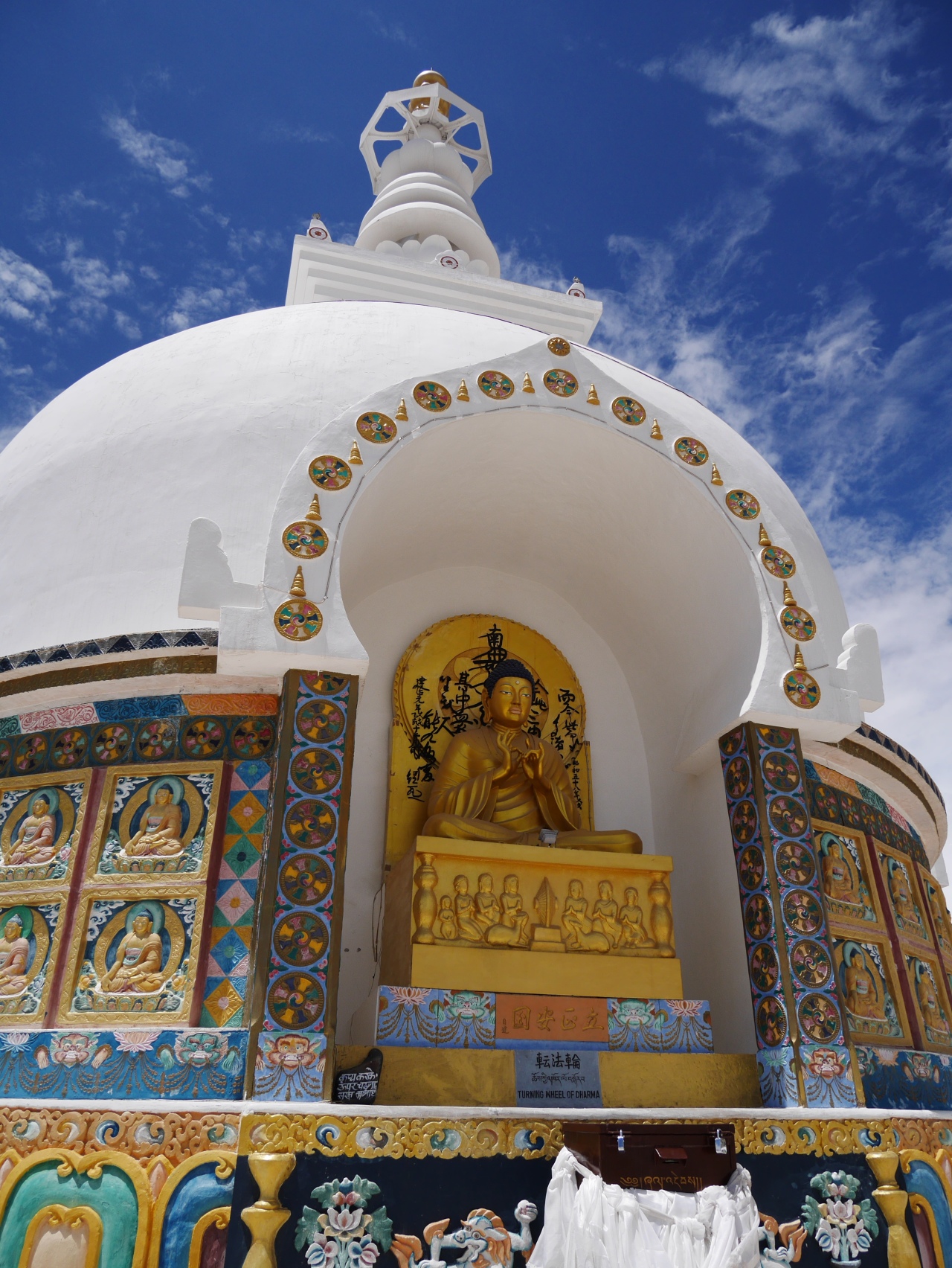 It was inaugurated by the Dalai Lama and it’s a grand spot to look over the city. 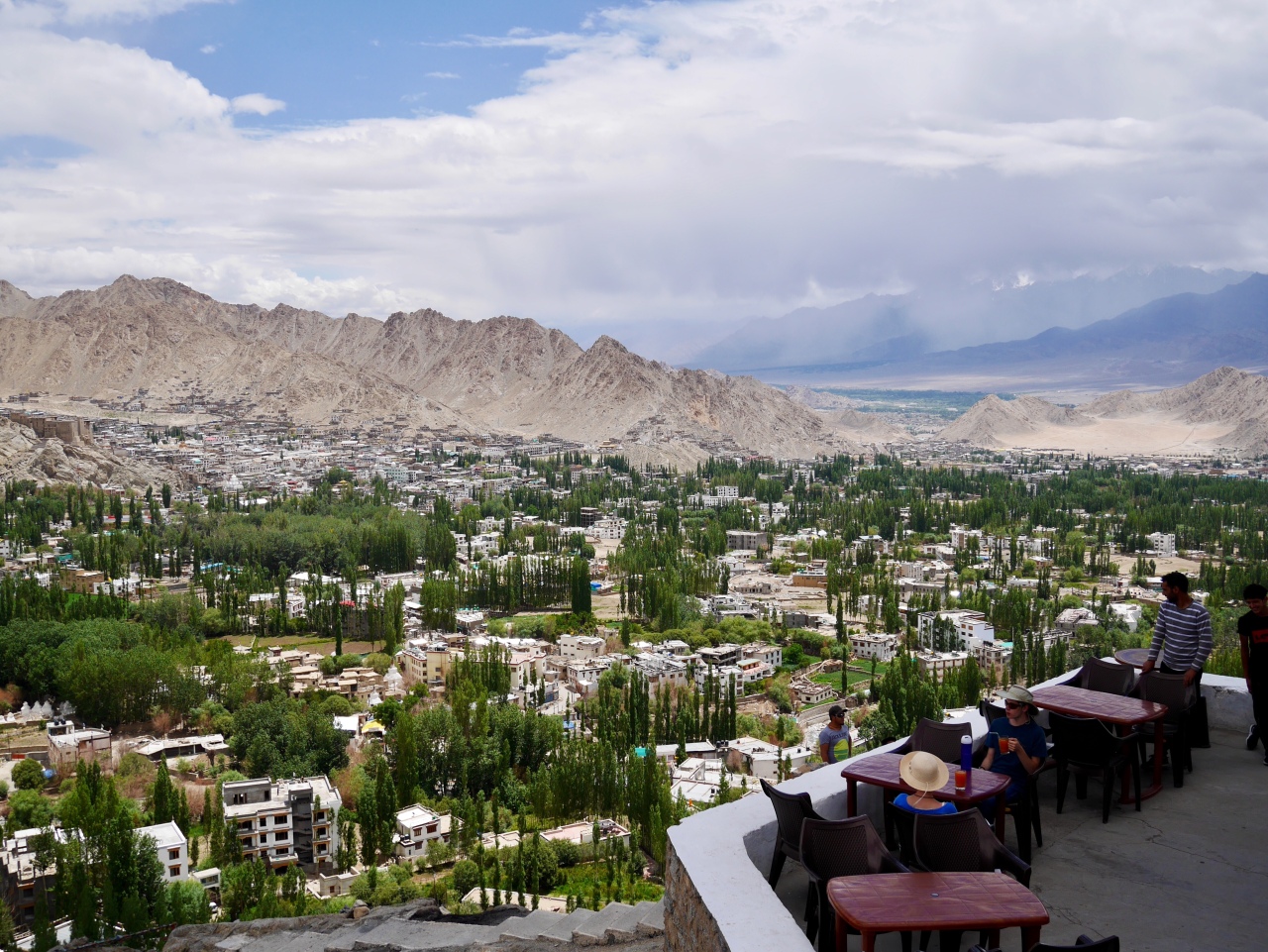 Photos of Leh in the 1970s showed a place that was more of a big village anchored by the lofty palace but surrounded by fields of barley, potatoes and mustard seed. Today it sprawls through its valley and it is still expanding at a rate of knots. There is building work going on everywhere. You see on the same plot, the simple mud block house with tiny wooden windows and hay drying on the roof, with a bigger whitewashed house tacked onto it with more elaborate multipaned windows, and then maybe something even bigger under construction next to that, which will be a guesthouse.

In five years I wonder whether cows will still be wandering these back alleys, and whether the dirt back streets will be paved. 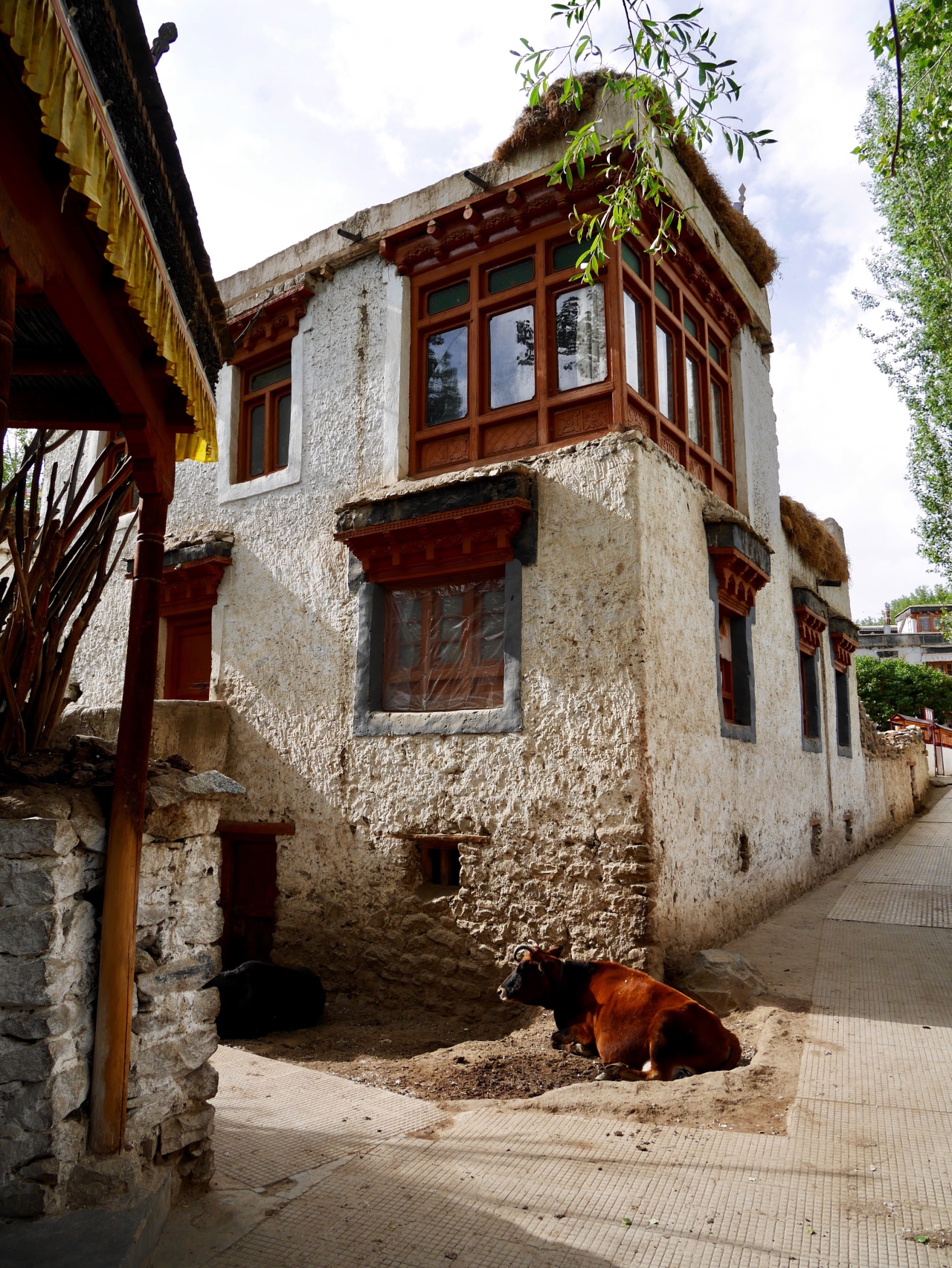 Everywhere there are immaculately planted veg plots with potatoes and turnips growing for the winter (which arrives in September) and lettuce, radishes, peas and beans for now. Even in Leh, people rely on their root cellars over the winter months. Pretty much everything we ate at the Silver Cloud Guesthouse was grown or made there. 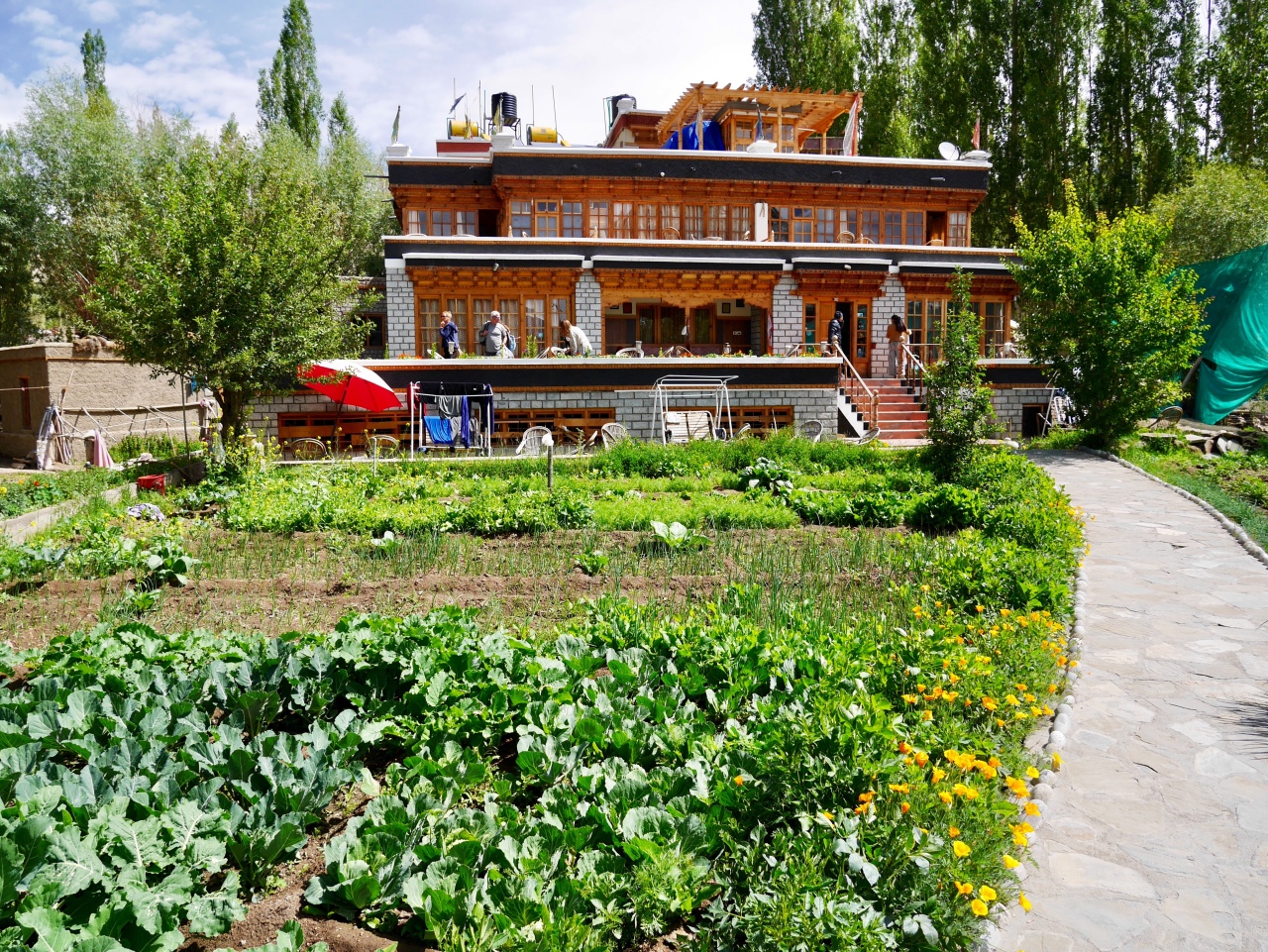 Even the yoghurt came from their cow which Padma (Mum) milked every evening. On the top of the building you can see the family shrine. One our last morning Padma told us to come up there because a monk was in residence. We went up the stairs to find a young monk in Nike trainers and a red Reebok sweatshirt under his robes, praying and beating the ceremonial drum. We stayed for a few minutes while Padma brought him little biscuits and cups of things and he carried on chanting. Buddhism is so deeply ingrained in the culture of Ladakh; everyone observes the rituals of only walking clockwise past a stupa or a mane prayer wall. Older people frequently walk with little prayer wheels, or sit with prayer beads. There are bigger prayer wheels everywhere and people spin them almost without thinking.

These deep traditional roots extend to medicine too. On the day we said goodbye to Sonam he had developed a dreadful cold. We asked if he needed anything for it and he said he had a balm that he rubbed onto his forehead and chest. I gave him some cold and flu tablets and it was clearly the first time he’d had anything like that. Most villages have an “Amichi” who practices traditional Tibetan medicine based on Buddhist practices. It stresses the importance of “balance” in the three humours: wind, bile and phlegm, and uses natural products for treatment. When we went to find a back specialist for P at Leh hospital, the Amichi had an office opposite Orthopaedics.

On the way back from the hospital it began to rain. Leh is in a monsoon shadow and someone told us that it only gets ten days of rain a year. Officially it gets about ten centimetres a year. But while we’ve been here it has actually rained – briefly – fairly often in fact and the Ladakhis are clearly puzzled by it. “This never happens” said Stanzin at the Silver Cloud. “It’s not supposed to rain now”. In August 2010 it rained so hard that flash floods killed at least 250 people – mostly in Leh – and more than seventy towns were affected.

As it grew into more than a shower we sheltered under a shopfront with a lady selling vegetables.

It began coming down in buckets – monsoon rain in all but name. It gushed like a river through alleyways, and pounded the pavement so hard that we were getting splashed up to our knees. 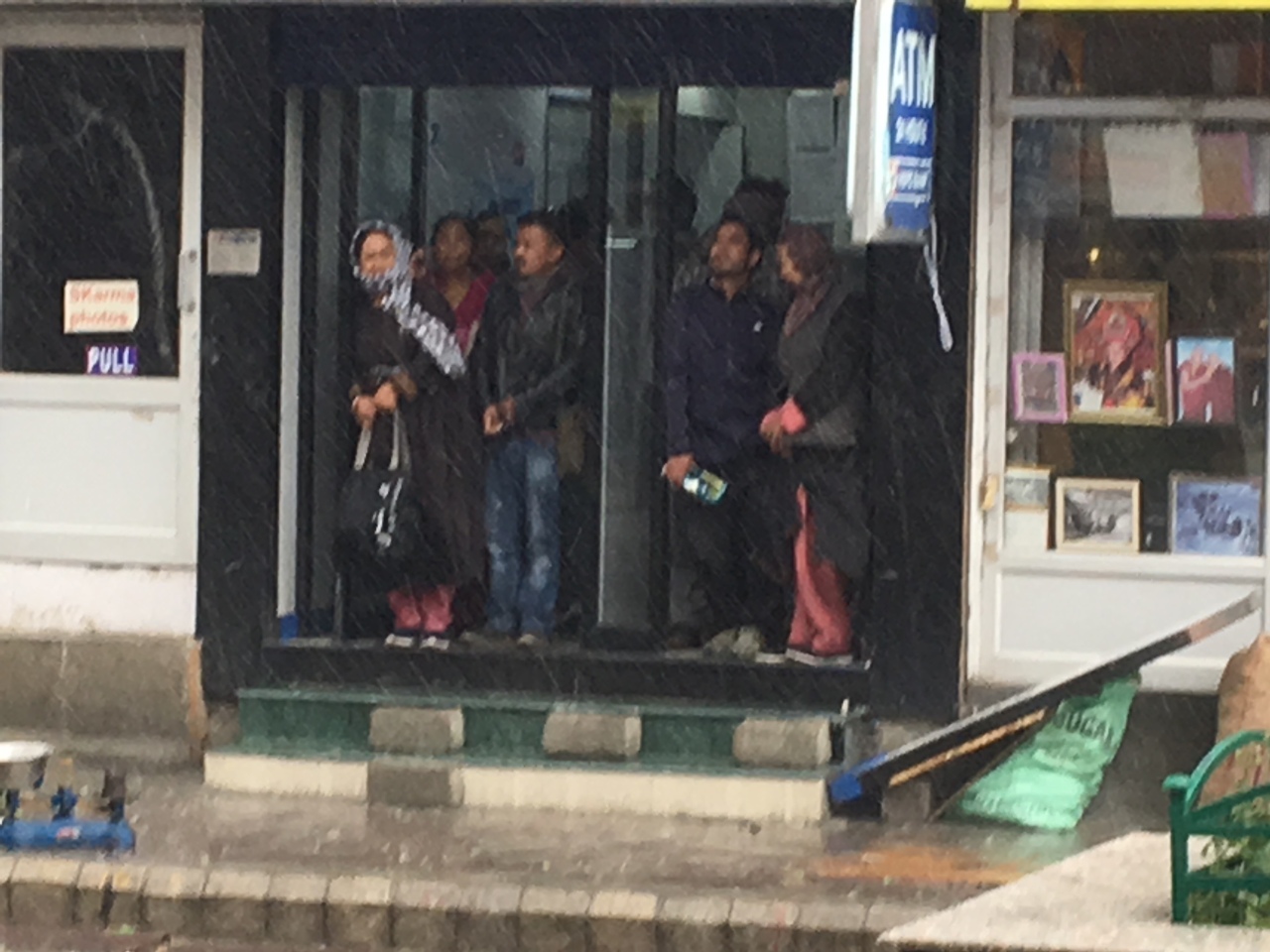 An older man with a prayer wheel seemed cheerfully oblivious to it though. 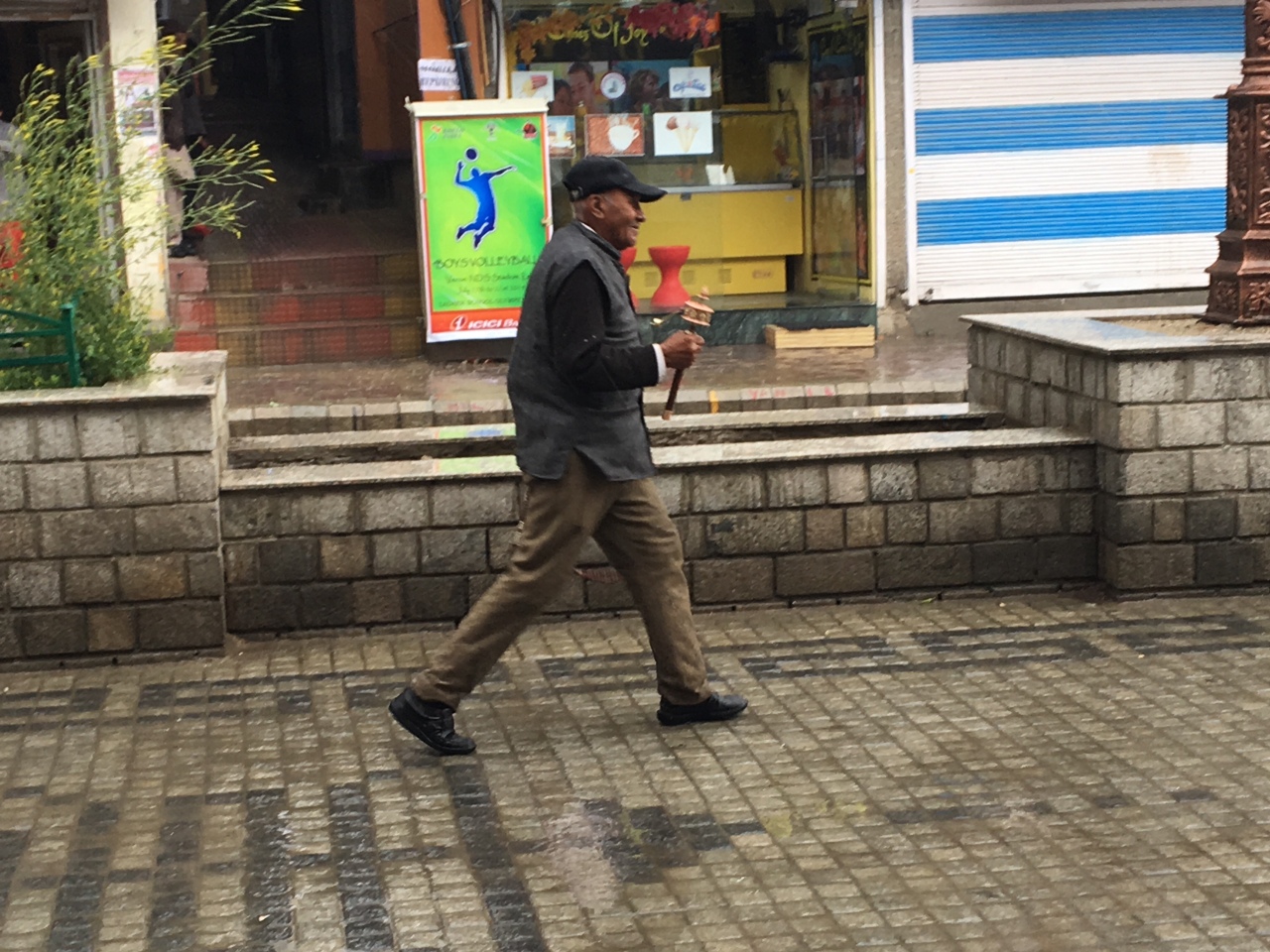 As it eased, our veg seller asked us to mind her stall for her when she went on some unspecified errand. P embraced her new position with some enthusiasm, shouting “Get yer radishes” at passers by. We realised we had no idea what to charge though.

Rain over, and from the terrace of our favourite cafe, we hatched a plan for the next few days. Back to Nimmu House for some more hiking and some rafting and maybe some biking too.