It’s amazing what a bit of sleep can do. We actually felt more or less ready to walk to Hankar today though P’s back is still giving her gyp. Today’s stretch of the Markha valley was only about 11k but would take us above 4000M and we are all wary of what higher altitude will bring.

After breakfast of flatbreads, honey and mint tea we were off into the sunshine. Sonam told us we’d been staying in Lower Markha.

Looking back to Lower Markha (homestay hidden in the trees)

Upper Markha was in the shadow of an ancient castle on a rock.

It’s a lush green place with irrigation streams threading through fields of crops. It was a really grand spot.

The green valley swept out in front of us and it felt like this was what the Markha trail was really all about. 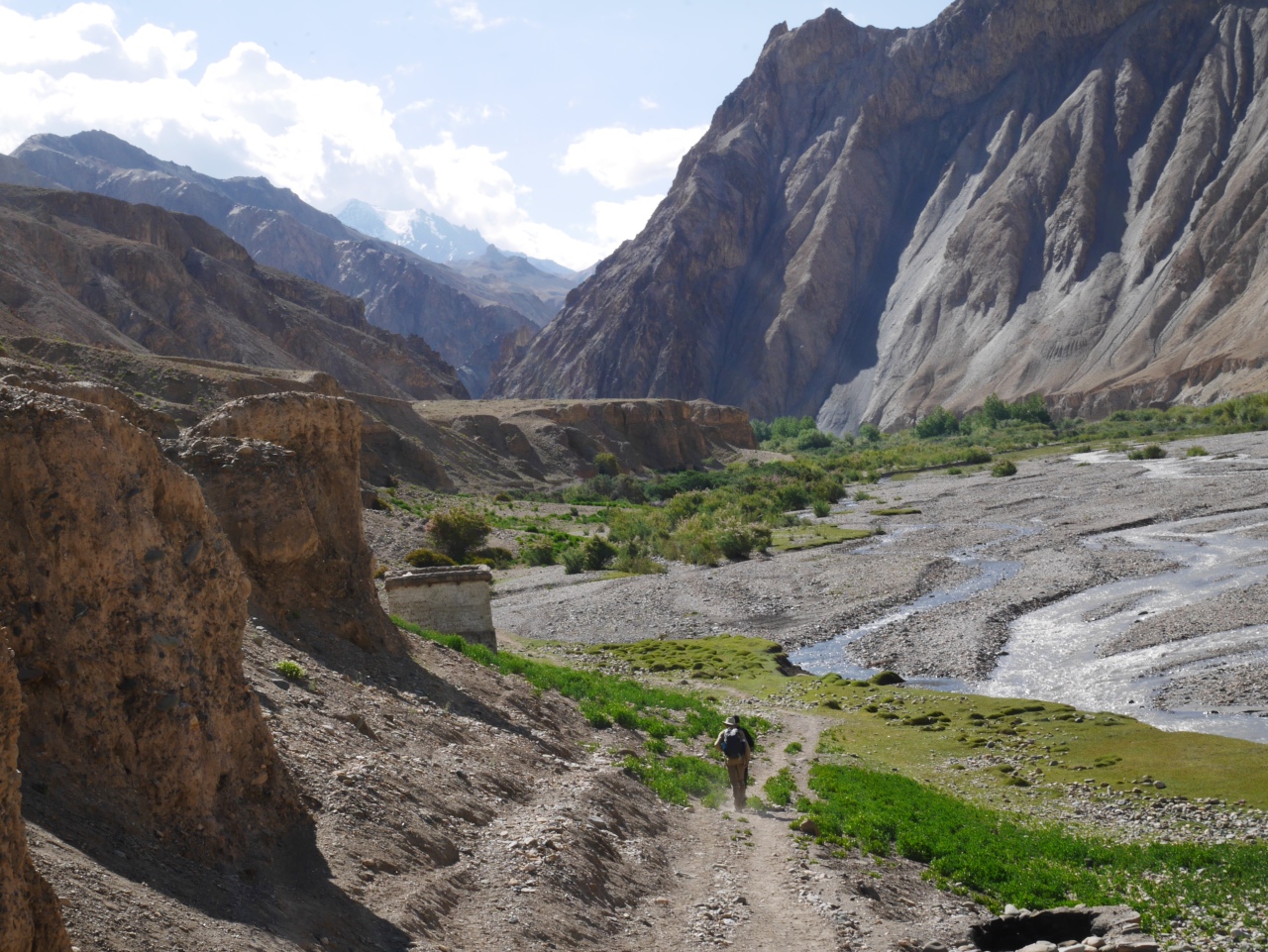 One of the nice things about this trek is that you are never far from water, so there’s always a cold drink when you need one. You also go to sleep to the sound of rushing water every night.

We had to cross the river again and this time when Sonam went in to find away across the water surged over his knees. A young woman who we’ve crossed paths with a few times arrived and looked at the rushing grey water somewhat doubtfully. She joined our chain, with Sonam using one of my trekking poles at the front and all of us holding hands.

At Umlung, Sonam pointed to a tiny white monastery perched at the top of the cliff.

The monastery is at the top right

Every day the monk there walks down the perilously steep track, crosses the river and walks on to Markha to carry out various rituals for the villagers, before walking all the way back. We’d seen him coming our way at the river crossing, which meant, said Sonam, we couldn’t get into the monastery to have a look even if we did climb up there. I think we were all grateful for the excuse to avoid scaling the cliff.

At a tea tent further on we had apricot juice and chai and a coffee and chocolate cake which the tea lady (for want of a better phrase) made for us in her kitchen: a tower of coffee flavoured biscuits with chocolate paste between them. It was about eight million calories.

There were fish in the river just beyond the tent, no more than about six inches long. Sonam said the Buddhists believed they were sacred and never caught them. We didn’t catch them either. For much of this section of the trek we came across sacred sites, and Sonam was always careful to walk past them clockwise.

Just as the noonday sun was beginning to hammer down, we arrived at a cluster of buildings which turned out to be our homestay, so that was easy.

Four hours of walking and here we are at 4030M or thereabouts. 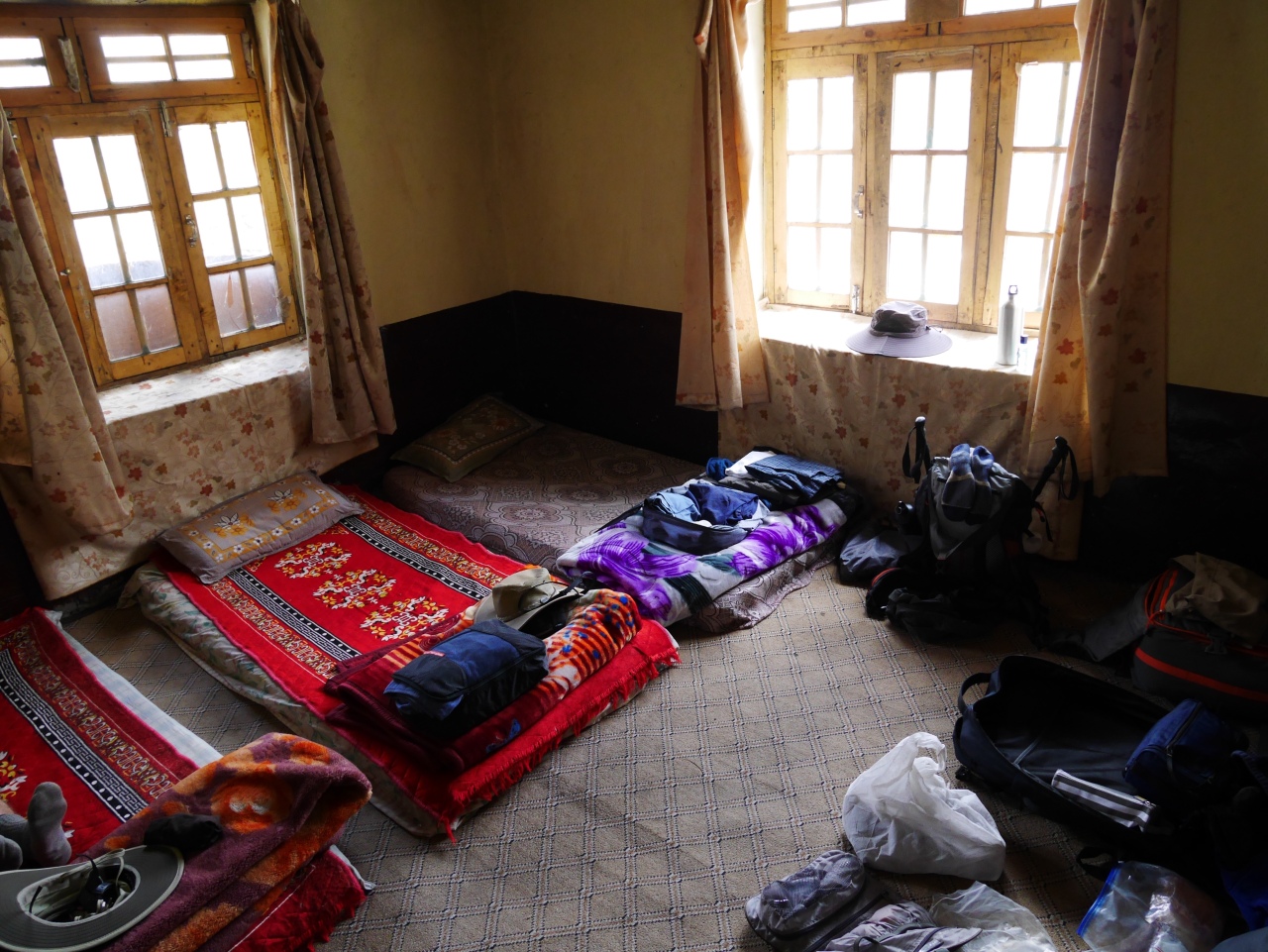 As I write there is a terrific clap of thunder outside and it’s probably raining or snowing over the high peaks. There have been a few drops here but nothing to speak of.

It was a lazy afternoon for the three of us, though Philippa did some washing in the flow of the standpipe which diverts water from the river. It dried in about two minutes.

At fivish Sonam took Tom and me to see a castle in the next valley. We climbed a steep cleft and came out onto the start of a broad plateau with a substantial finger of fortification on a pinnacle high above us.

“Can we go up there?” asked Tom. I was sort of hoping the answer was no as I was gasping from climbing up the cleft, but Sonam, in his thonged sandals just headed up a steep and barely there goat track up the rock. Blimey. Tom bounded up after him and I gingerly wheezed my way up behind them. It was worth the climb though.

The old fortress, sixteenth or seventeenth century thought Sonam, was tended to by the villagers until relatively recently but it’s most crumbled away and it’s now too dangerous to get into the keep. It was once a huge structure, big enough to house the whole village for a year in case of attack. 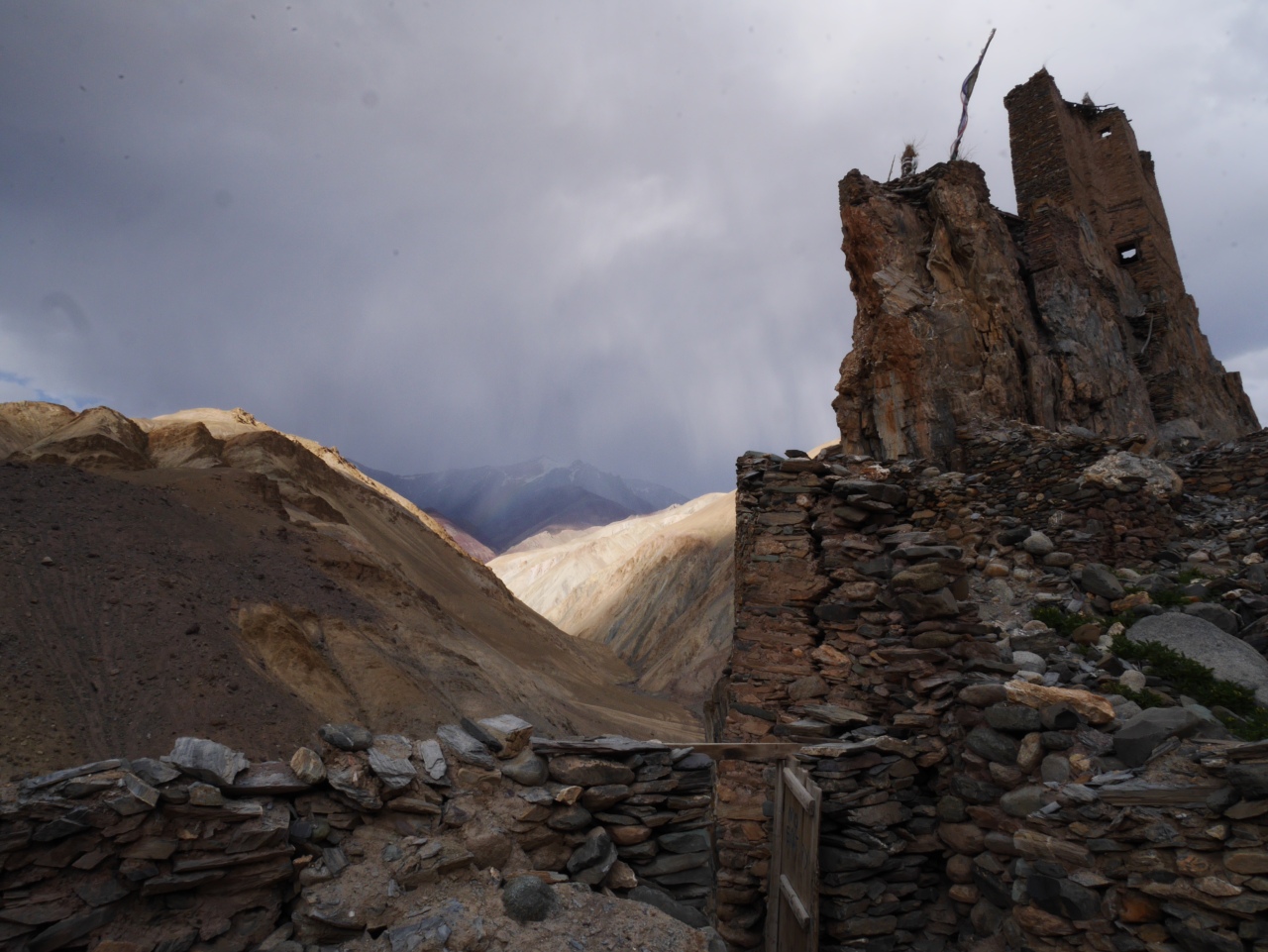 Acrosss the valley came a clap of thunder as a storm raged over one of the high passes. Up on that crag it felt suitably dramatic. Sonam told us that the nobleman who constructed the fortress had a fine collection of religious artifacts which he wanted to take with him when the castle became too dangerous to live in, but every time he tried to take one particular statue away the sky darkened so in the end he built a shrine for it at the base of the cliff, which we went into. The walls were lined with really ancient printed silks, some now crumbling to dust, and the statue sat placidly in a glass fronted cabinet.

When we got back the the river by the home stay, it was more difficult to find a place to cross as the rain higher up had turned the water into a churning torrent stained deep red by the rock of the high cliffs.

Tomorrow sees the start of a tough couple of days, climbing steeply to a tented camp on the upper slopes of Kongmaru-La (5260M) Then we go over the top before the long walk back down.