Sorry Tom. Breakfast in the RV, which apart from the smoked sausages offered at the cafe, was identical and a lot cheaper. Actually we needed to get on the road as we had a whole lot more driving to do and a whole lot more of Wells Grey Provincial Park to see as well. So little time… 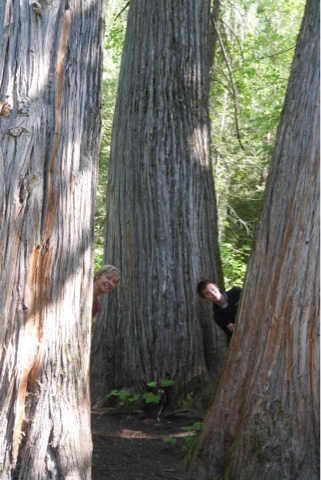 The first stop was Bailey’s Chute, the last point on the river for the Chinook Salmon who’ve swum all the way there from Alaska. It’s a steep section of rapids and at this time of year the fish try to jump them to get further up the river. But they can’t. The chute is way too powerful and so, exhausted, they eventually give up and float downstream a little way to spawn. 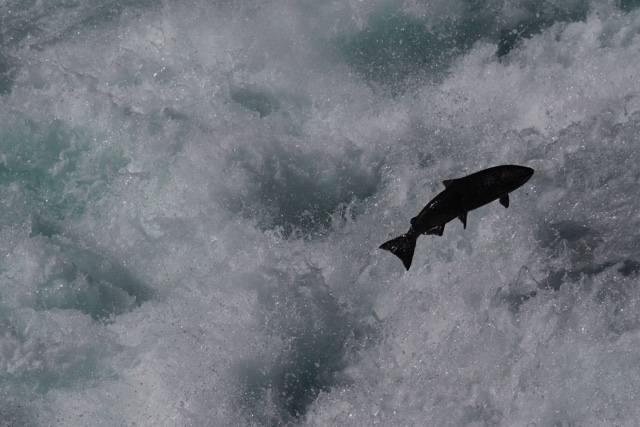 OK so here’s the thing. How do thousands of generations of salmon know exactly how to swim downriver to the sea, how to pause to get acclimatised to the salt and then find the Aleutian Islands, and eventually go back to the rivermouth and back up the river, but they don’t know that it is impossible for them to get up Bailey’s Chute? They have all that genetic memory but that seems to be a blind spot. Perhaps when they get there they say, “Well I know no-one else has done it, but it doesn’t look so hard. And the girls will be impressed…” Yes that’s probably it. But whatever the reason, it made for a thrilling spectacle. The salmon are big by the time they get here and every couple of minutes one or two will fling themselves out of the water only to be flipped and thrown back by the rapids. We were transfixed. To be honest this justified the entire trip over to BC on its own. Absolutely mesmerising. 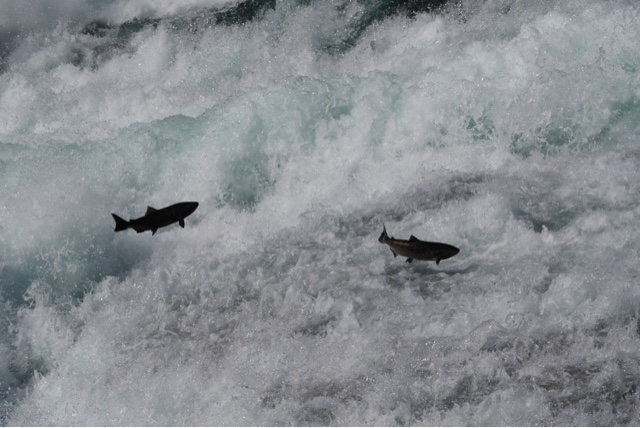 We tore ourselves away and jolted a little further down the rutted Cleawater Lake gravel road to Ray Farm, which was my pick. Philippa said “Tom, we are getting out. Dad thinks there might be some rusting agricultural equipment here”. Tom’s little heart skipped a beat at that as you might imagine. Sad to say there was a distinct lack of ancient Massey-Fergusons but it was a really lovely spot. 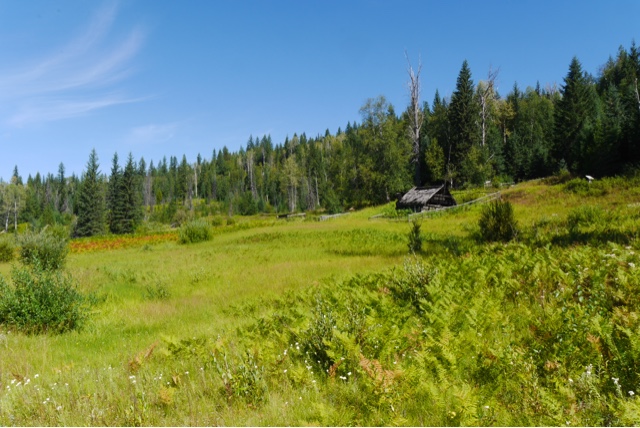 The land was given to John Ray by a local Canadian tribe in 1910 after he helped them through a measles epidemic. He and his wife Alice eventually set up a farm there and lived on the land from 1932 – 1946. They had three children there too and were apparently devoted to the place. When the children moved away from BC they gave the land to the State and it is being “returned to nature”. The house is a tumble of logs. The last barn is slowly sinking into the boggy ground, surrounded by wild raspberries. John and Alice were buried on the hillside looking down over the farm. 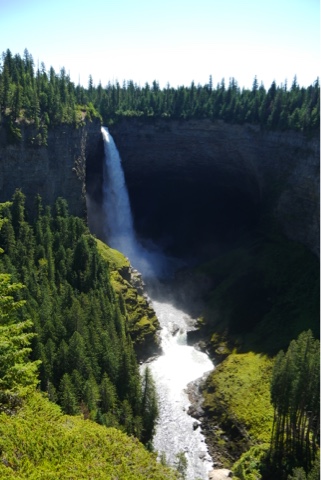 The next stop had a bit more drama. Helmcken Falls. Canada’s fourth tallest! Though it has to be said these things are all about how you choose the measure them. Officially, Canada’s tallest falls are the Takakkaw Falls just up the road. 254 meters! But the Della Falls on Vancouver Island are 440 meters. They though are broken by a ledge, so they don’t count at all. Apparently. Anyhoo, the Helmcken Falls are named for someone who had no idea they existed and never saw them, but they are seriously impressive “plunging” (it says here) 141 meters to the canyon below. It’s quite a sight and looks like a dam has burst somewhere.

And on, finally to Spahat Falls (Wells Grey is famous for its waterfalls) which is as dramatic for the mighty canyon it has cut as for the falls themselves. 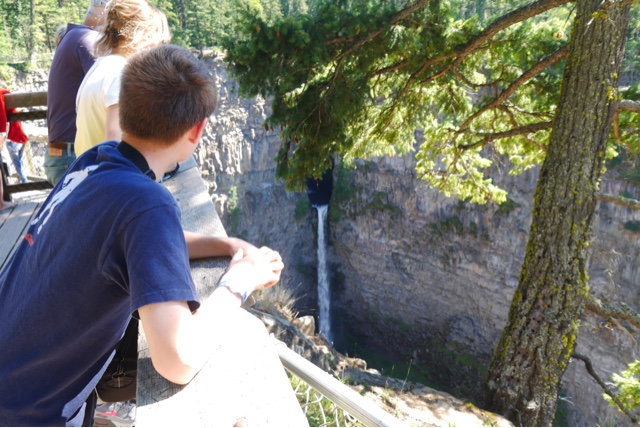 You could walk along the canyon to another set of famous falls but we were out of time. We had to get back over towards the National Parks in Alberta and didn’t really know where we would end up tonight. The highway goes through Kamloops but our trout chef last night said there was a short cut over the mountains involving a section of gravel road. I asked in the (very good) Clearwater info centre about it and they said it was indeed a short cut. We also used their wifi to line up a campsite near Sicamous. So now we had a plan and hit the Trans-Canada Highway for 60K before turning off onto Agate Bay Road.
It was a gentle rolling drive to start with through a lush valley floor where small farms were raising cattle. We passed the remnants of many old log cabins, slowly dissolving into the landscape. At one point we were held up behind a tractor with a trailer overloaded with hay and enjoyed the quiet of being on a backroad in the late afternoon sunshine.
Eventually the road abruptly ran out, and we dropped a couple of inches onto a gravel logging track. It rose up along the flank of a mountain, looking down onto deep blue Adam Lake below, the shoreline dotted with cottages and tiny boats. The road was rough in paces but not bad and we didn’t meet any thundering logging trucks. Eventually, at the fantastically named Squilax, we descended and rejoined the highway. Squilax should definitely be a thing. It’s what you could do on an armchair made of marshmallow.
We had definitely returned to civilisation. As we drove through Salmon Arm the roads were busy with rush hour traffic and the hotels and gas stations and resorts and roadside mini-malls all seemed to be doing brisk business. We pushed on to Sicamous and found the “Family Tree RV” campsite, which was full of willow trees. We parked by the river and watched “Local Hero” which is a friendly little film from the 80s set on the wild Scottish Coast. Freight trains serenaded us as we slept. Or tried to.