The gas ran out last night. That meant the heating died and so did the fridge. We were all wrapped up and warm though and it was cold enough in Thor that I don’t think the contents of the fridge suffered too much. It will chill down again properly once we start driving again and the fridge switches to  electrical power. That one gas cylinder has lasted us all the way from day one in Sweden, which is fairly impressive.

I’ve just pulled up the blinds and can see low cloud brushing the very top of the mountain across the road from us, but I can still see the glacier spilling down its flanks into shafts of sunshine. Tom has just emerged from his bunk where he has been reading. He pulled back the curtain and looked surprised to see me up. He has a bit of a shiner this morning after falling off a rock when he was running around outside Thor last night. He just caught an eyelid which immediately swelled up but we put some frozen vegetables on it and some arnica (“Thanks Granny Margaret”!) and it doesn’t look too bad now – just a rather interesting shade of violet. P is reading in our bunk but I think its time I made us all some (cold) breakfast. 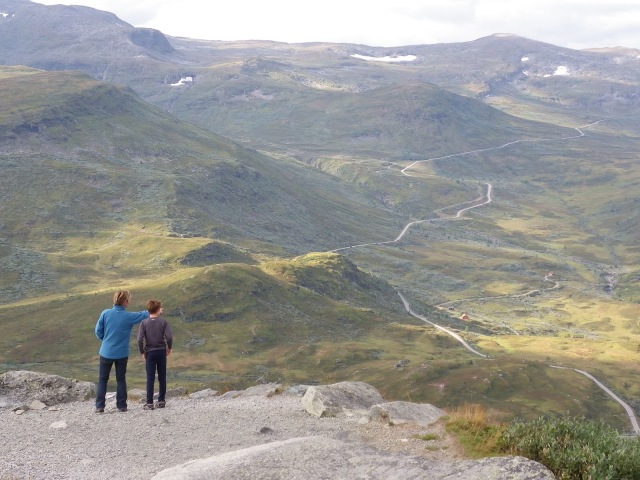 Well, after the cold breakfast we set out back onto 55 heading south through the Sognefjell mountains under a morning sky with drifts of cloud and patches of sun. At the hamlet of Turtagrø we stopped and went into a hotel/info centre to try to find a walk recommended to us by a nice older gent at the tourist office in Lom. He was laughing with us about how nice it was travelling around Norway now that all the tourists had gone but then suddenly looked stricken as he realised that we too were tourists.  “I am just joking of course” he said nervously. Obviously we are reporting him to the Norwegian tourist board. In what may well be one of his last dealings with a tourist he had told us there was a walk up to an old farm with delicious food near Turtagrø. The lady in Turtagrø looked blank when we asked about it though. I remembered that the farm had been built with stones carried up from the river by the farmer and she knew it instantly: “Fuglested!” she said, or perhaps it was a sneeze, anyway that sounded right and she sent us to the next place ten k down the road called Fortun. As we turned to go out, a trim elderly lady behind me smiled and said “It means fortune”. 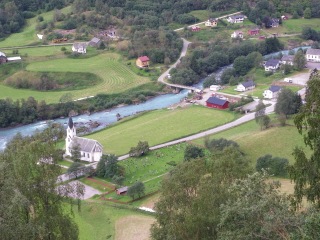 The village of fortune sits in a wide green valley with sheer, forested mountains rising around it on all sides.  P thought it looked Bavarian with its neat white wooden church and low-slung farmhouses. Our first stop had to be to find more gas otherwise the fridge would go off every time we stopped and there would be nothing to cook with. In a place as small as Fortun we didn’t hold out much hope. We pulled into a scruffy Shell station with bits of car about the place and no sign of any gas facility. There was no-one at the counter and we almost pulled out again.  We spotted a couple of mechanics wrestling with a Subaru; I asked them if they had camping gas and one of them took our cannister off to a shed, filled it and charged us the grand total of about forty quid for a month’s worth of cooking, heating and fridge freezing. Bargain! He also had a bolt to replace one that I flipped into the engine bay and lost when I changed the headlight bulb  in Mo-i-Rana. “Its no charge” he said with a smile. So yes, Fortun certainly lived upto its name for us, and it continued when we stopped at the hiker’s car park and there was a drain for our grey water tank. How exciting can one village get?? 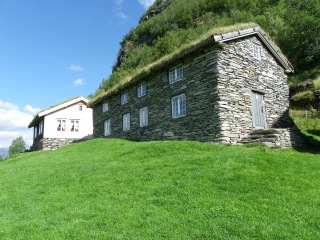 We had been given varying accounts about how long it would take to get up to the old farmstead. The lady in Turtagrø said it would be an hour and a half, the former tourist information advisor in Lom said it was an hour and fifty minutes and the sign in the car park said it was two hours and very steep. It certainly was steep. It was like climbing stairs all the way and I am not exaggerating. We must be getting fitter though because after just an hour and twenty five minutes we were walking through a grassy field to a collection of turfed roofed buildings including a handsome stone farmhouse. It was built in 1830 by Sylfest Ormeli who apparently spent five years carrying the stones up from the river all the way to the field 630 meters above, before telling his wife that he planned to build a farm there. Again, these Norwegians are different from the rest of us. Apparently his kids walked up and down the mountain to school in Fortun every day.

It was a nice enough spot and we had our picnic enjoying the gorgeous views down to Lustrafjord at the end of the valley. You can stay in the buildings now and although they were closed up, we found an open door into one and admired the old wooden floors, worn down between the knots. There was no coffee and cake unfortunately as the tourist season is now well and truly over as we were told by a former tourist board employee.

Going down was a lot quicker and we grazed on the raspberries growing wild by the path. Then we grazed on ice-cream at the co-op by the car park in what was now hot sunshine.

We climbed back into Thor with his fridge now icy cold again and got back on the road, stopping five minutes on at Skjelden on the tip of Lustrafjord. It was too lovely to miss and Tom was determined to swim in the blue water despite the fact that it was utterly freezing. He went in several times though, gasping with the shock of it and coming straight back out onto the warm wood of the pontoon.

On then down 55 and our wild mountain road had now become a gorgeous rural byway, hugging the fjord on a skinny little road that required close attention when people came the other way. It was very pretty, with bright red boats floating in the impossibly turquoise water, and enormous stone barns and ancient clapboard farmhouses on the shore. At Gaupne we turned right and followed a cobalt blue river up towards the Nigardsbreen glacier arm. We are the only occupants of a funny little time-warp campsite just down the road from the glacier centre. The elderly lady who runs it takes only cash and sells trolls next to the cash register which she has clearly knitted herself. First time I’ve seen a knitted cash register.

We are hoping to go onto the glacier tomorrow but rain has been pattering on the roof this evening and we will have to wait and see what the sky is doing when we wake up.