As in “Somewhere, over the rainbow, weigh a pie…”. We have just crossed the highest point on the road from Lom to Sogndal – 1400 meters or so, and have parked in a levelled off area by the road. Across from us is a broad flank of the Jostedalsbreen glacier, shooting white waterfalls into one of the many blue-grey glacial lakes at its feet. Its a grand spot with only the occasional passing car. We’ve been sitting outside in the evening sunshine, nursing the last of our gin and eating cashew nuts. Its not exactly warm out there – the cool breeze off the glacier sees to that – but it is beautiful and very peaceful. 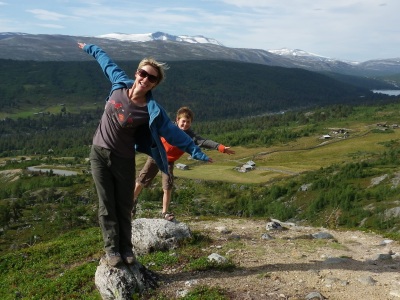 Our morning started much the same way. After breakfast we found the start of a couple of hiking trails and discovered from a noticeboard that we had spent the night in the Breheimen National Park. We had intended to have a twenty minute walk, but there was a 3.5K trail to a natural rock bridge which seemed too good to miss in the warm sunshine. Inevitably, it was steep and we were all puffing after ten minutes, but eventually we came to a small gorge with a giant boulder suspended over the water, wedged between the two sides of the crevice.

Tom hopped across and would probably have done handstands on the boulder given half a chance. P and I were a little more circumspect. The path on the other side skirted some ancient farms on land inhabited by farmers for more than a thousand years according to the blurb on the noticeboard. Our twenty minute walk ended up being ninety minutes and was a marvellous start to the day.

The road to Lom is fast and the scenery, gentle. The mountains are wide and rounded rather than tall and the valley bottom is full of prosperous looking farms. Its interesting to see several generations of farmhouse and barns on the same plot. Often, in the middle will be the old turf-roofed house, its timbers now bleached grey. Around it will be small grey-timbered barns with mossy roofs, sometimes sagging somewhat. Then, very close by – perhaps across a courtyard – will be the new, bigger, farmhouse and barns in dark timber. Most of the rural buildings here are brown and black rather than red – quite a change from northern Norway.

In Lom we stopped for lunch in the car park of an ancient stave church. It was lovely from the outside, but inside it was extraordinary; a great stack of carved timber reaching into a dark roof. There were bits of colour here and there and its thought the whole interior could have been painted red. It was built in 1158 and although the community was Christian, they also put dragons heads on the church roof to ward off evil spirits. I love those remnants of ancient beliefs that lingered on in parallel with the new religion. 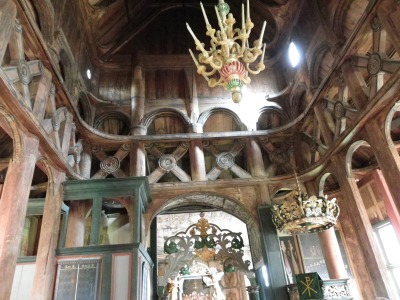 The docent was a young German guy and as we were the only people in the church we monopolised him. He was terrific, using a torch to point out patches of graffitti written in runes. One phrase was written high on the wall and said something like “I have been higher in this church than anyone else” or the docent said it could also have been “I have done more to this church than anyone else”. He said when the vikings invented runic script it was regarded as magic and only really used to write words on swords or important stones. Later though it became widely used and he said they had found a wooden rod under the church floor in which a man had proposed to a woman in the congregation. He also told us of another stick found in Bergen which simply said “your wife wants you home now”.  The first text message?

We spent much longer in Lom than we planned. Its a nice little mountain town – apparently the driest in Norway – and has a rather good water sculpture in its central square which echoes the aqueducts the farmers built to bring water down the mountainsides.

Lom is also the start of the scenic route south to Sogndal, passing first through countryside and buildings that feel a bit like the Swiss alps, all tiny farms and glossy brown cows. But then the road starts to climb and soon we were in the Big Mountains again with the white wave of the Jostedalsbreen glacier breaking over their high ridges. We stopped a couple of times to get out and soak it all in, despite the chill wind. We stopped too a mile or so back to go up to a patch of snow a couple of hundred meters from the road. P and T had a mini snowball fight.

We had intended to get a bit further tonight but when we saw the big space with a view over to the glacier, we couldnt resist. Its going to be cold tonight; the wind is whistling around Thor and we are almost out of gas for heating so we shall wrap up. Its exciting though to imagine ourselves all alone in this vast mountainscape.