It rained on and off for much of the night but this morning the clouds were being whittled away by sunshine and the sky was soon completely blue. So the Glacier walk was on! I rang the glacier centre a couple of days ago and found that they had now stopped the group tours in which ten year olds are allowed to go, but if we had a private guide we could all get onto the ice. So, on the basis that this is not something you do every day, we coughed up for the private guide and met him by the lakeside just across from the Nigardsbreen “Nodule”. Our guide book insists that these rivers of ice that curl down the hillside from the Jostedalsbreen glacier above are called “nodules” but its the least convincing name for them imaginable and I haven’t seen the term anywhere else so I’m going to ignore that terminology.

Frånk (I’m guessing at the spelling but it’s pronounced “fronk”) was a sturdy sort of chap and initially fairly taciturn but when he started dishing out crampons, ice axes, harnesses and a helmet for Tom, we knew he was someone for whom actions spoke louder. He said he had been guiding people on the ice for twenty years, which almost certainly meant he was a teenager when he began.
There is usually a small ferry to take you across the glacial lake to the foot of the glacier but Frånk told us “It is broken, so we will walk for an hour to the glacier”. And that’s what we did, hopping over rock worn smooth by the retreating ice, lugging all our kit and watching the tidal wave of ice get closer and closer.

Its a lot bigger close up! Suddenly all those caves and cracks are revealed to be far bigger than people. The ice is a lot less white too. The further to the front the ice, the older it is and the more dust gathers on it.

We all put on our harnesses, and strapped the crampons to our boots.  Frånk explained about how to use the ice axes, and how to walk on the crampons: “Its important to trust the crampons – feet flat when walking”. Then he roped us all together and off we went.

Walking on a glacier is such an alien experience. Lower down it is as though it is composed of millions of ice cubes, each about the size of Tom’s fist. It crunches and crackles underfoot as if you were walking on broken glass – or big diamonds.

It was completely thrilling just to take a few steps. The whole glacier is a mass of tunnels and rivulets and streams and rivers running over, through and under it. You never really lose sight of running water somewhere over its surface, and of course all around on the slopes of the mountain there are huge waterfalls created by the vast Jostedalsbreen glacier above the relatively small offshoot we were walking on.

Frånk took us to deep blue holes with water crashing into them, echoing down the tunnel and vanishing out of sight. We jumped over sinister blue crevasses, and climbed up through cliffs of ice formed by the pressure of the sloping sides of the valley. 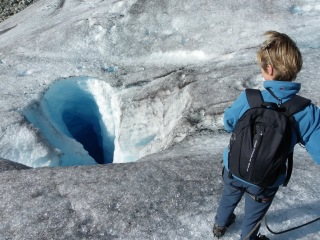 Thanks to the crampons it never really felt slippery and P and I would occasionally exchange “can you believe we are really doing this?!” glances.

We climbed out of the crevasses and onto the wide flank of the glacier, looking down onto the lake below, and up onto the ferocious ice cliffs in a narrowing of the valley above us. Frånk said it would be possible to walk through them but would take days.

He told us stories of the occasional accident that has taken place up there. Years ago a car with Italian plates had been found nearby apparently abandoned and they searched the glacier but found nothing. Several years later someone reported seeing two people sitting on the ice back to back and it turned out to be an Italian couple who had fallen into a crevasse and apparently sat back to back after being unable to get out. Eventually as the ice shifted, it brought them back to the surface. 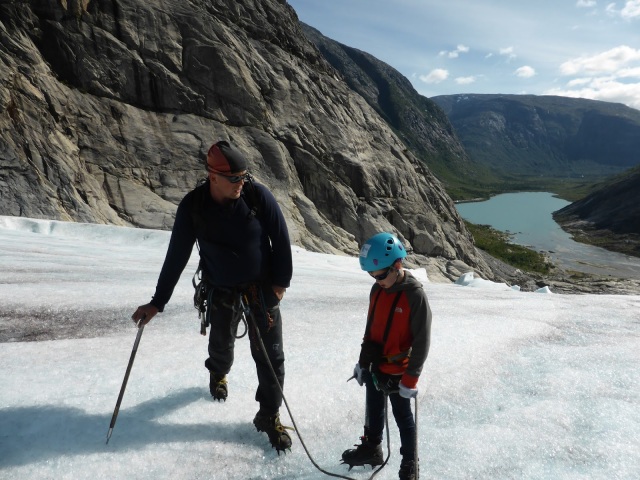 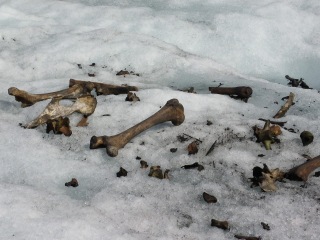 On the way down we found the bones of an Elk which had befallen the same fate  and had popped up about eight years ago on the ice.  In fact for the most part the glacier was extremely stable according to Frånk, who said most accidents happened on the rocky walk to the foot of the ice.

Tom fell and bashed his knee at one stage. Frånk said we could get a new kneecap from the pile of bones, but Tom decided that probably it wasn’t that bad…

We spent about three hours on the glacier, wending our way up it, down it, over and through it and it was truly awe-inspiring. At the end of it Frånk gathered our kit and walked back along the lakeshore, leaving us to enjoy the sunshine and the huge smooth rocks at the foot of the ice.

The walk back to Thor – almost six hours after we had set out – seemed a lot longer than on the way out and we were all a bit crispy around the edges from the sun bouncing off the ice. We got the camping chairs out to sit and watch the view and plot our final few days of this trip. 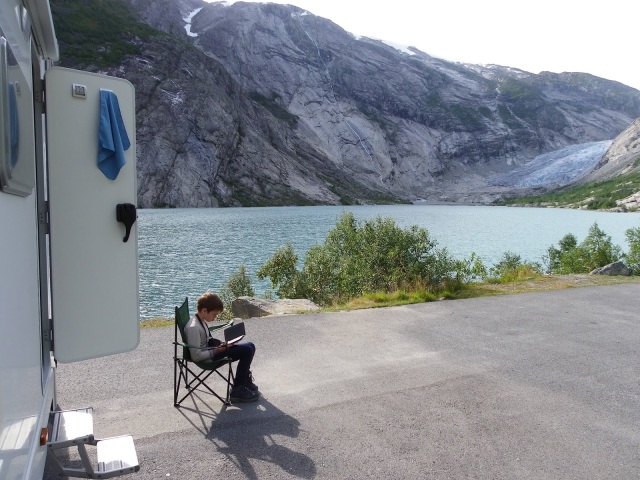 Then it was back onto the narrow road to Gaupne and onto the 55 again through what feels more like civilisation again.  We are just across the fjord from Sogndal now at the neatest little campsite we have stayed at I think. It was strange to sleep though, without the white noise of a waterfall somewhere in the distance, and the thought of a glacier looming over us.